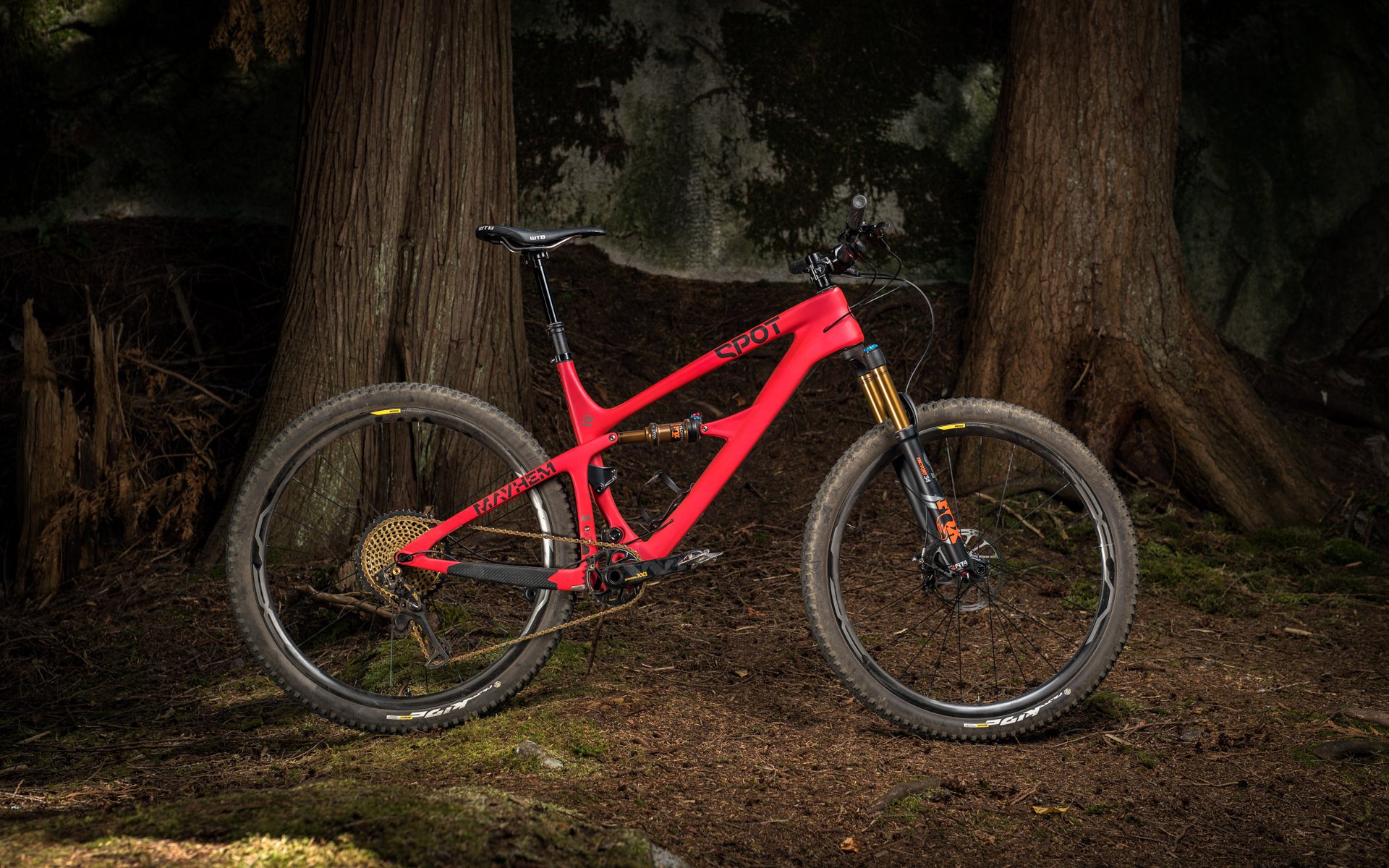 I've been spending a bit of time on 29ers that inhabit the heavy hitting end of the spectrum lately, so I decided to jump on something skewed more towards trail than enduro for a change of pace. Cam took a shine to the Spot Mayhem at the Sea Otter launch, and I too was intrigued by the novel suspension platform and svelte aesthetics from a brand that has little exposure in our neck of the woods. The opportunity to give one a go was met with very brief deliberation. Let's take a look. 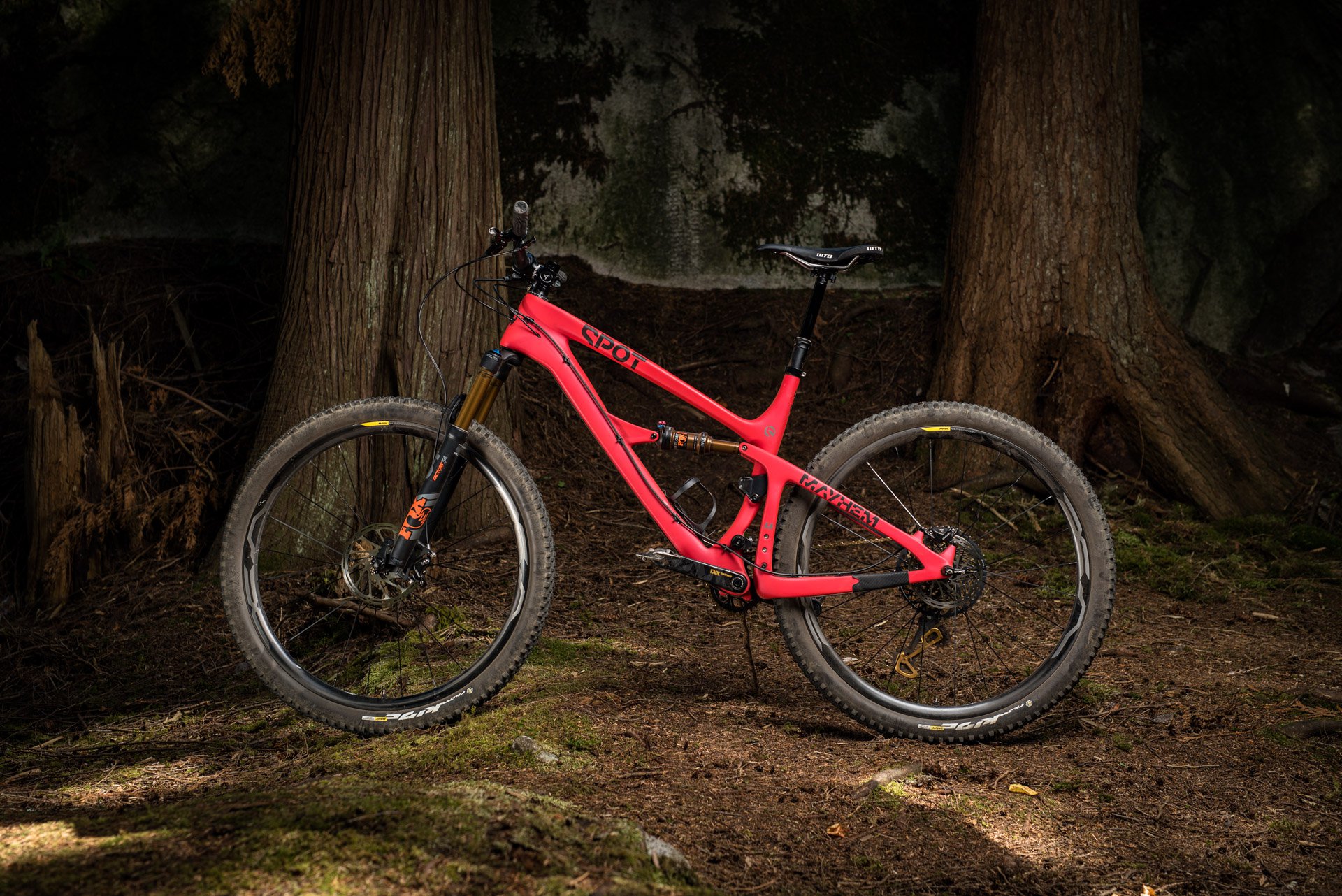 B-side. It's a pretty silhouette. Brake line is externally routed; dropper post & derailleur are internally routed. Note the tire tracks on the rock; bonus points to those that can ID the locale.

The brand was birthed here in Vancouver, BC, building steel hardtails (welded by local torchwielding legend Mike Truelove). The company moved south of the border before running out of steam and was eventually sold to the Lumpkin family - founders of the Avid brake company, who are currently based out of Golden, CO. Hardtails have been the core of their product line (though diversified into city, road and CX as well as mountain) and this is their first foray into the realm of full suspension platforms. As such, introducing a unique new suspension design, it's a fairly ambitious launch. 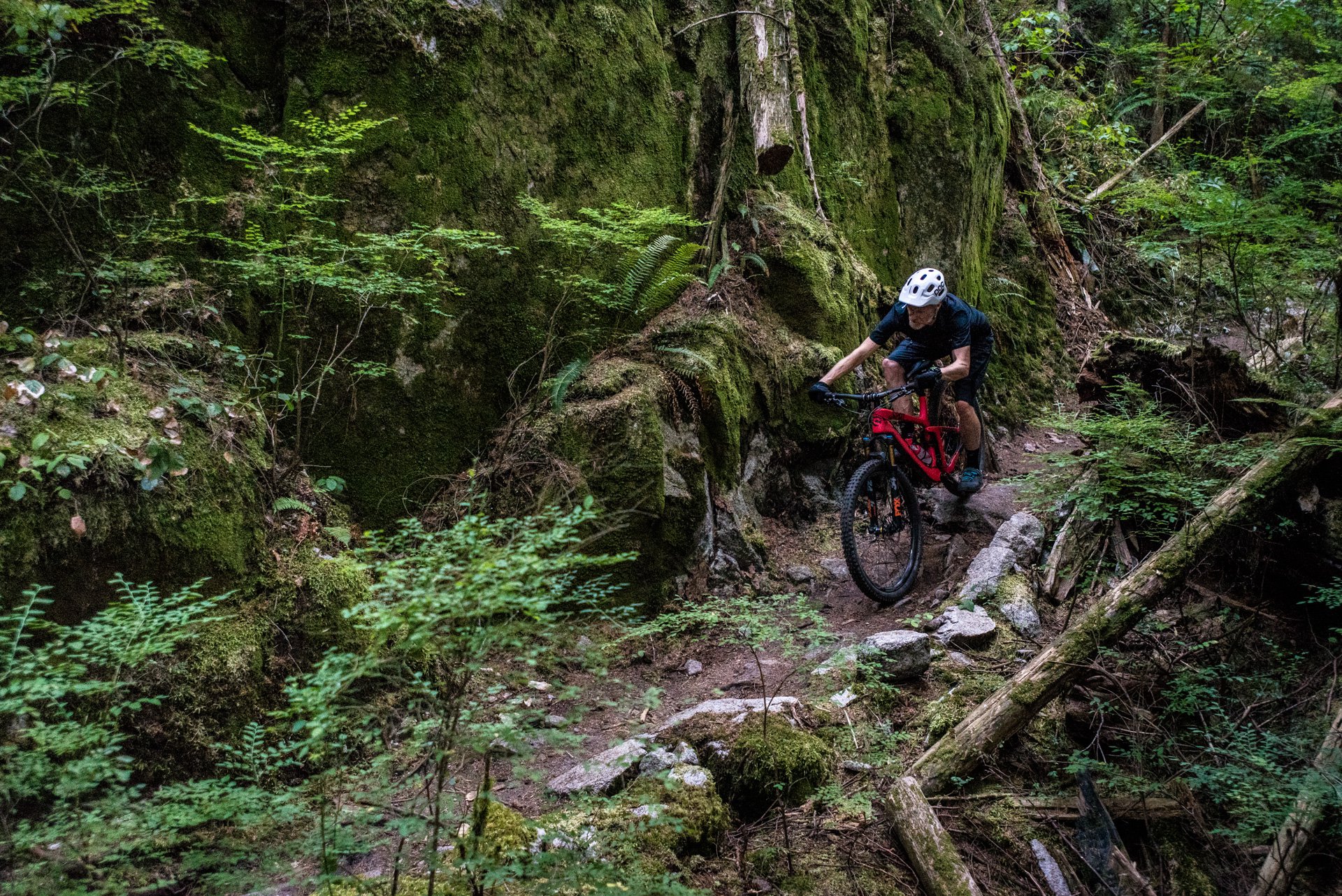 Considering we haven't had any proper rain all summer, there's some quality deep forest green going on here. Dave works hard to deliver the dank.

There are three build kits and a frame only option available - our review rig is the top of the line "6 Star" build with a hefty $8,700 US price tag. As should be expected, all components are top tier at this spec, with nary a cut corner to be had. The cheapest complete build is $5,800 US, and the frameset goes for $3,200 US. The size large tester weighs 28.6 lbs on my scale, with XT Trail pedals (not included).

There's nothing too radical going on here. I'd describe the numbers as thoroughly contemporary. A slack-ish head angle paired with a steep-ish seat tube angle, and a long-ish reach. It's nice to see the effective and actual seat tube angles don't diverge much, so those running longer seat post extensions aren't deprived from the benefits of the steeper angle. Travel is balanced at 130mm front and rear. Peruse the cold hard numbers: 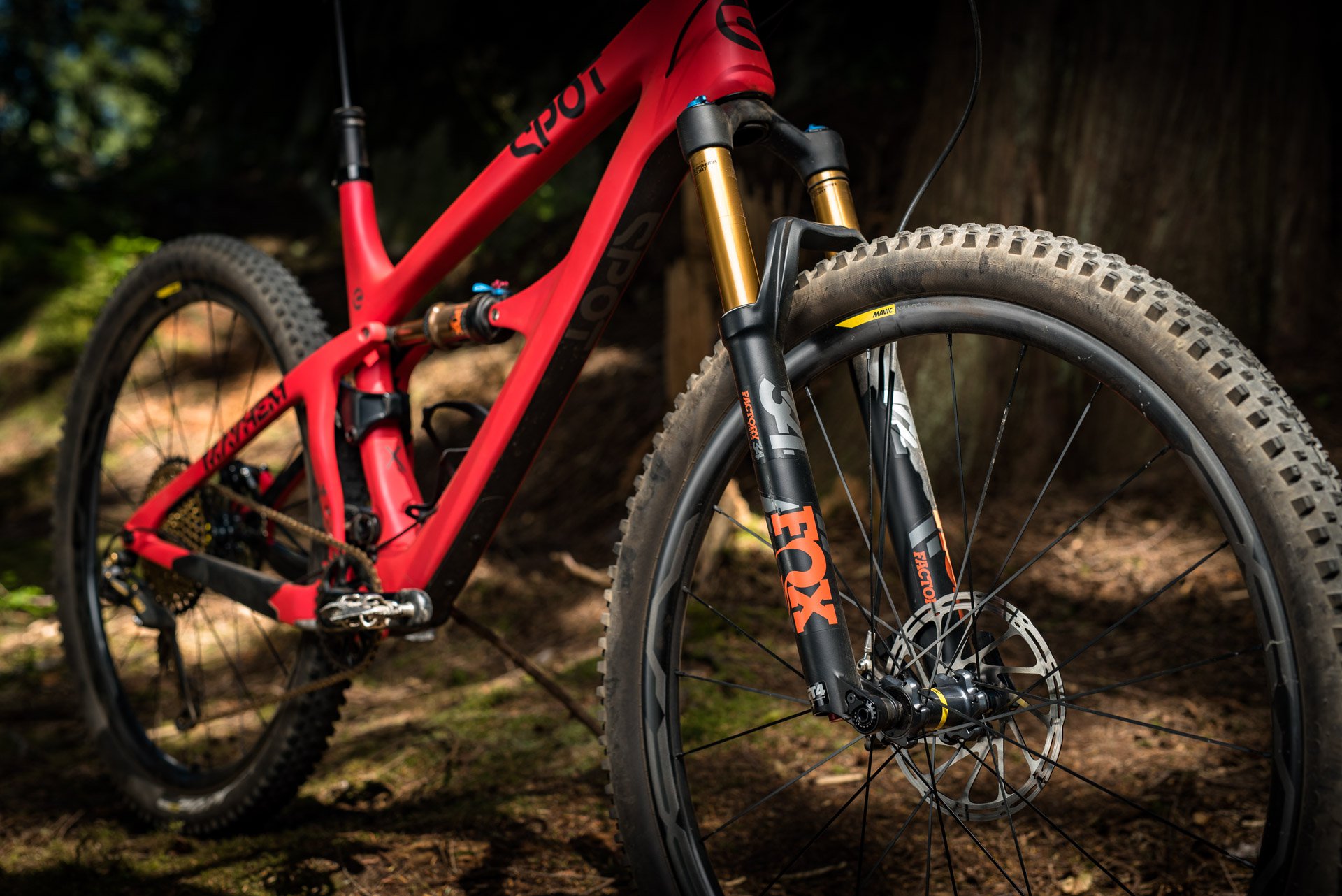 A 130mm Fox Factory 34 Float fork resides out front. I have to say I'm smitten with the aesthetics of this frame. Some nice lines going on here. 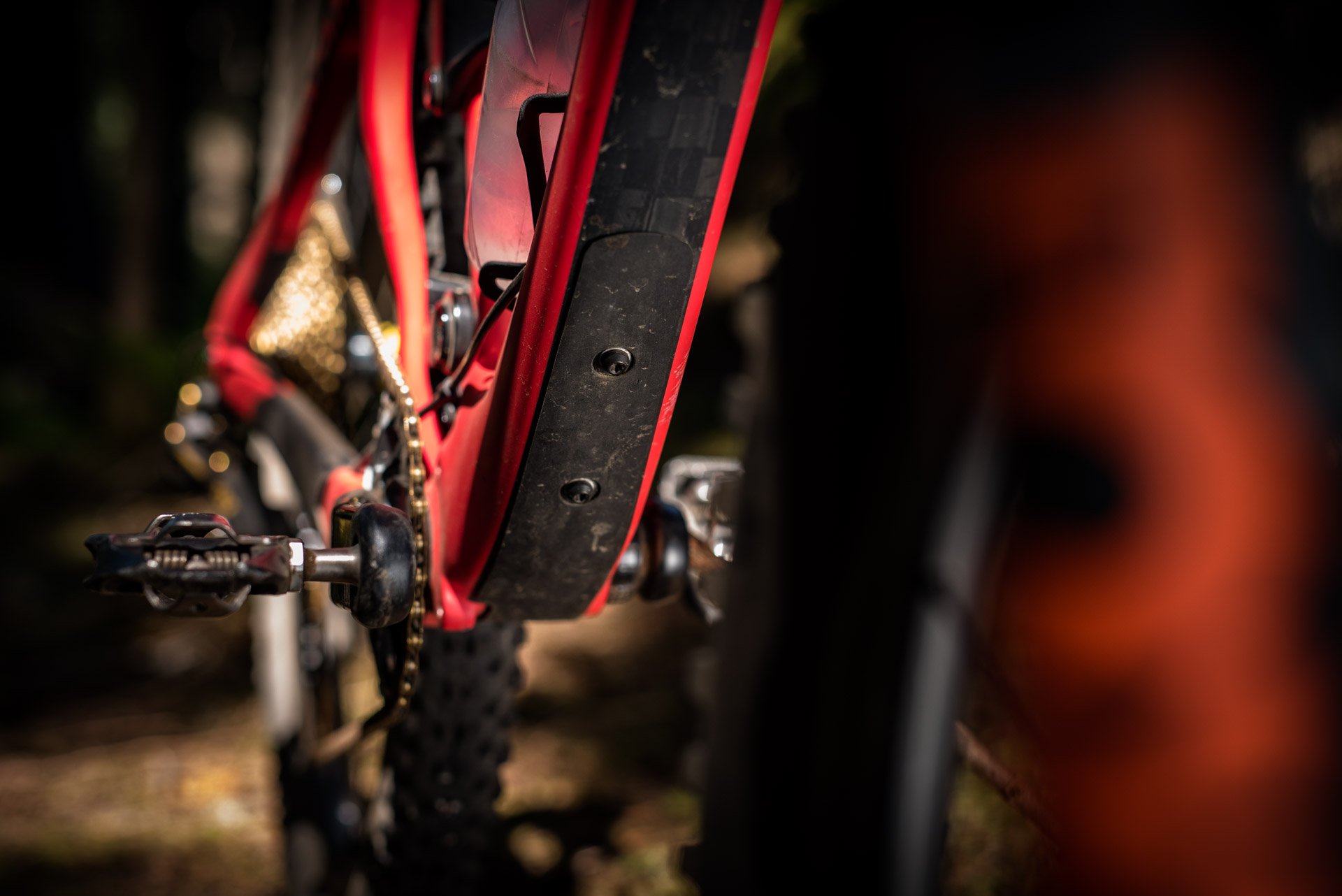 The downtube sports a bit of rubber protection as well as a second set of water bottle mounts. 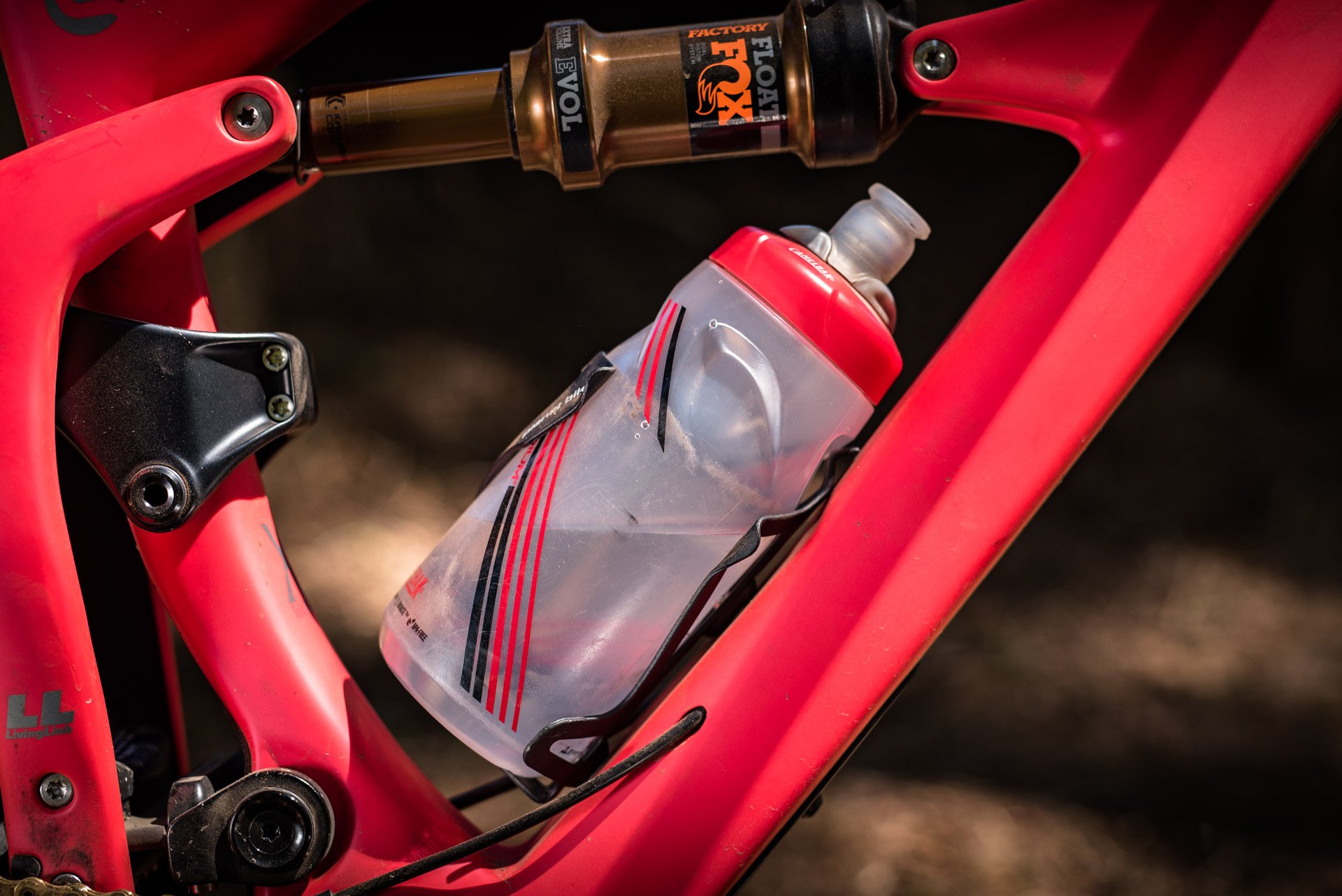 Upper and lower links are well tucked away. Though the bike doesn't ship with a bottle or cage, I thought it a good idea to demonstrate fitment. Bottle carrying capability makes me happy. You're limited to a small bottle, and a side loader cage is required for easy access, but it's appreciated, nonetheless. Unsolicited plug - the Planet Bike Sideload cage I'm using here works great. 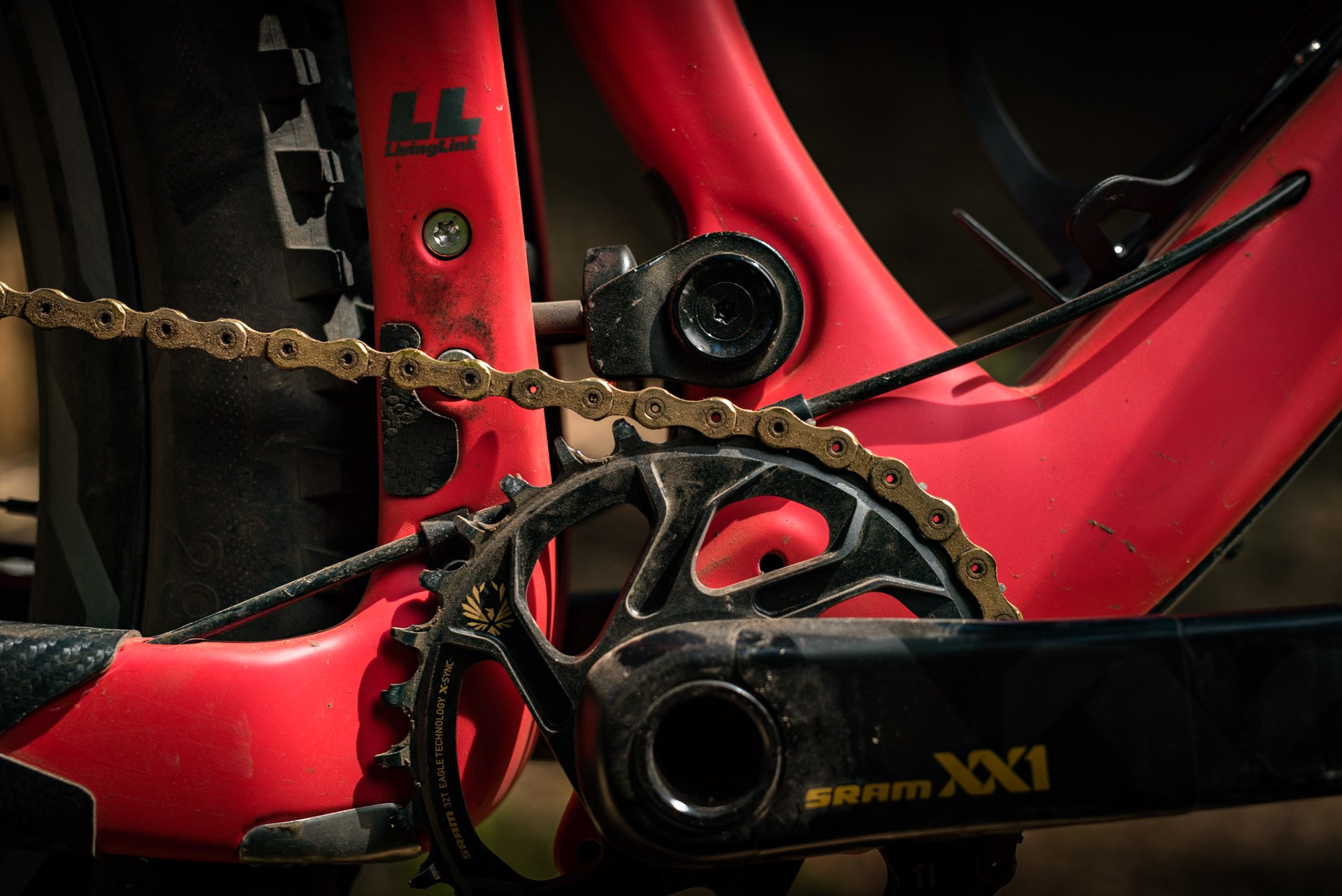 The swingarm sports chain protection in (nearly) all the right places. Showing a bit of chain scuffage above the sticker. The 32T chainring is pretty cozy with the swingarm. I'm not sure you'd be able to squeeze a larger ring in there; an oval ring of the same tooth count might have interference issues. BB is a threaded affair. 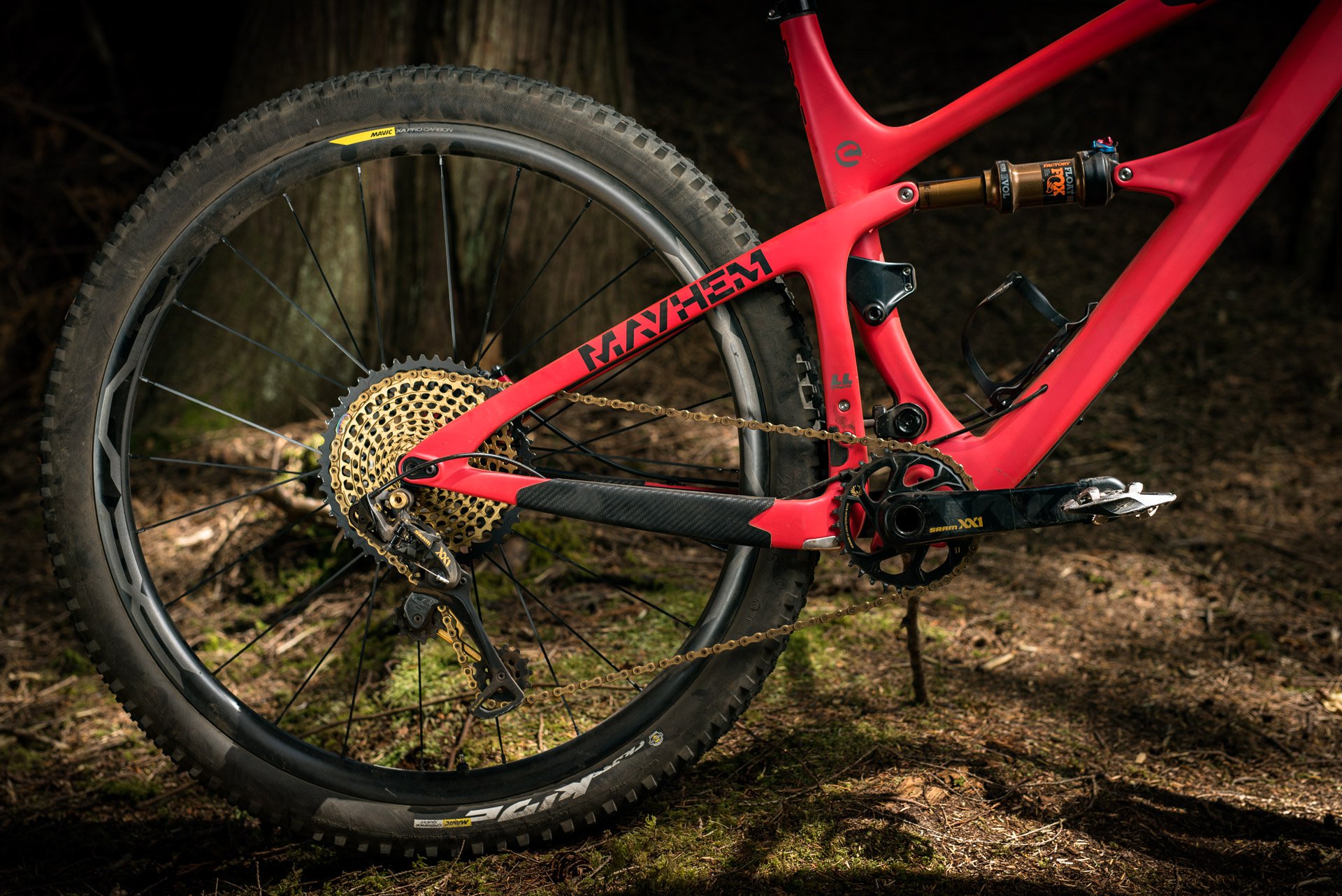 The Eagle drivetrain in all its shimmering golden glory. 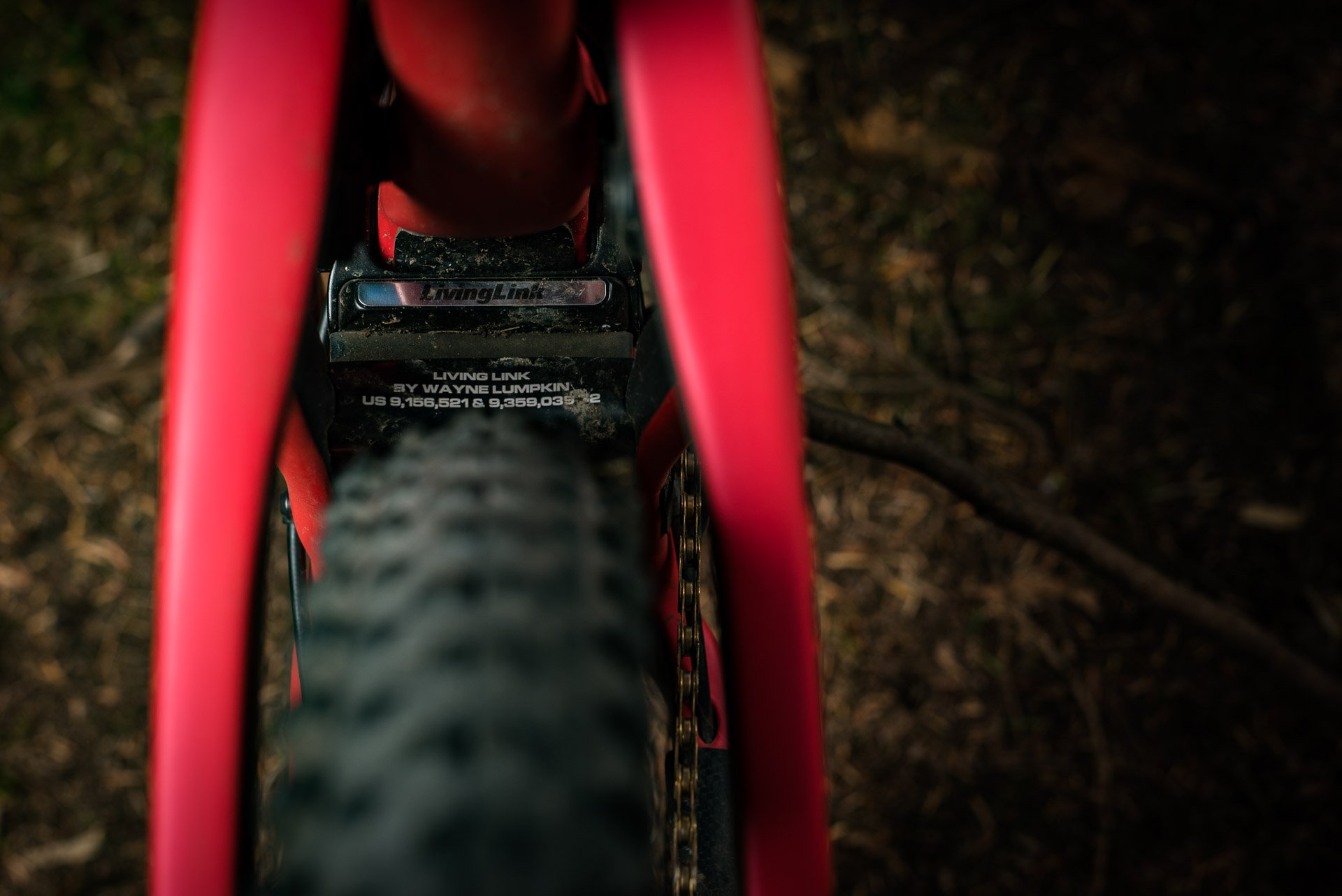 The Living Link, by Wayne Lumpkin. Two patents on that wee widget. Decent tire clearance in there. 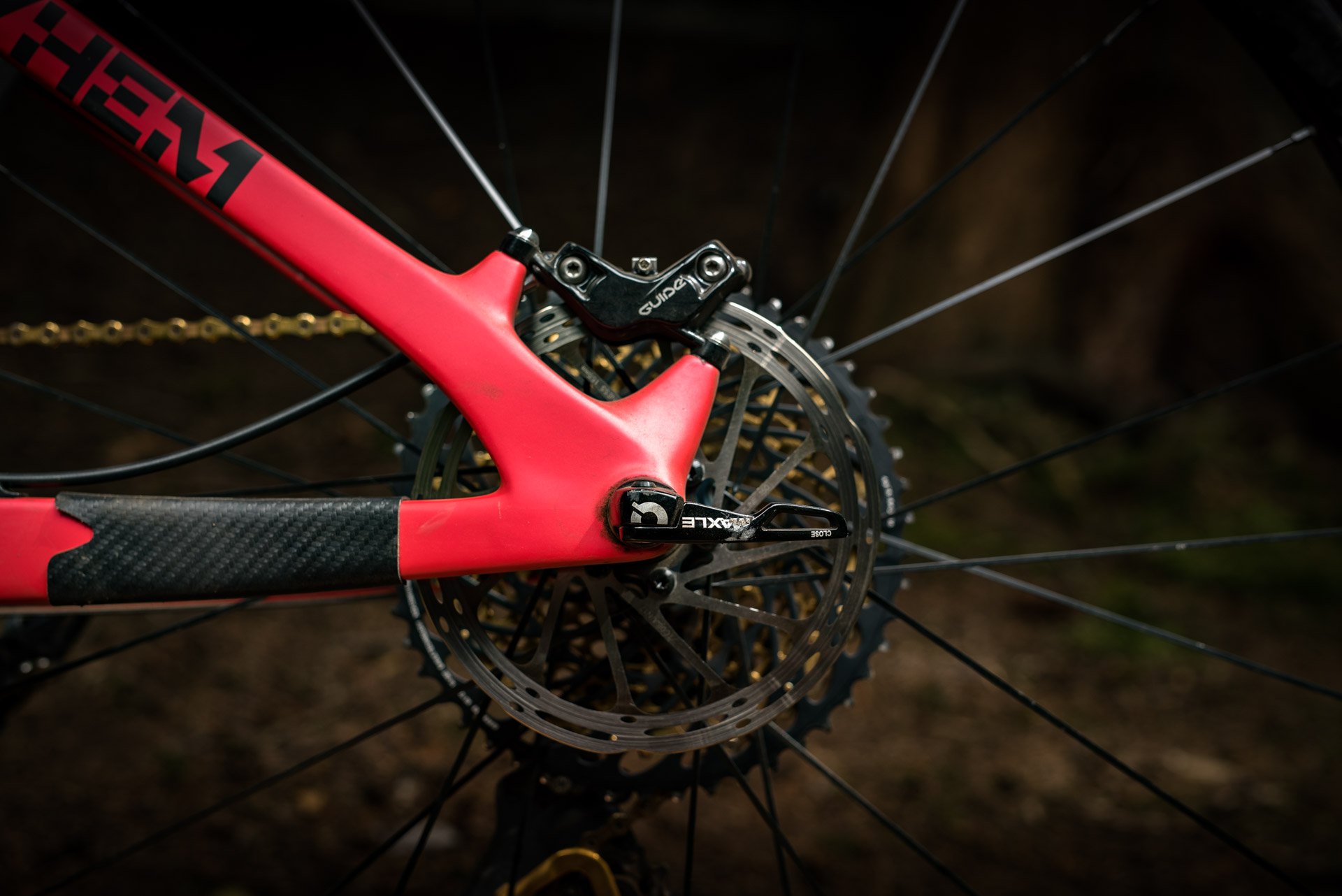 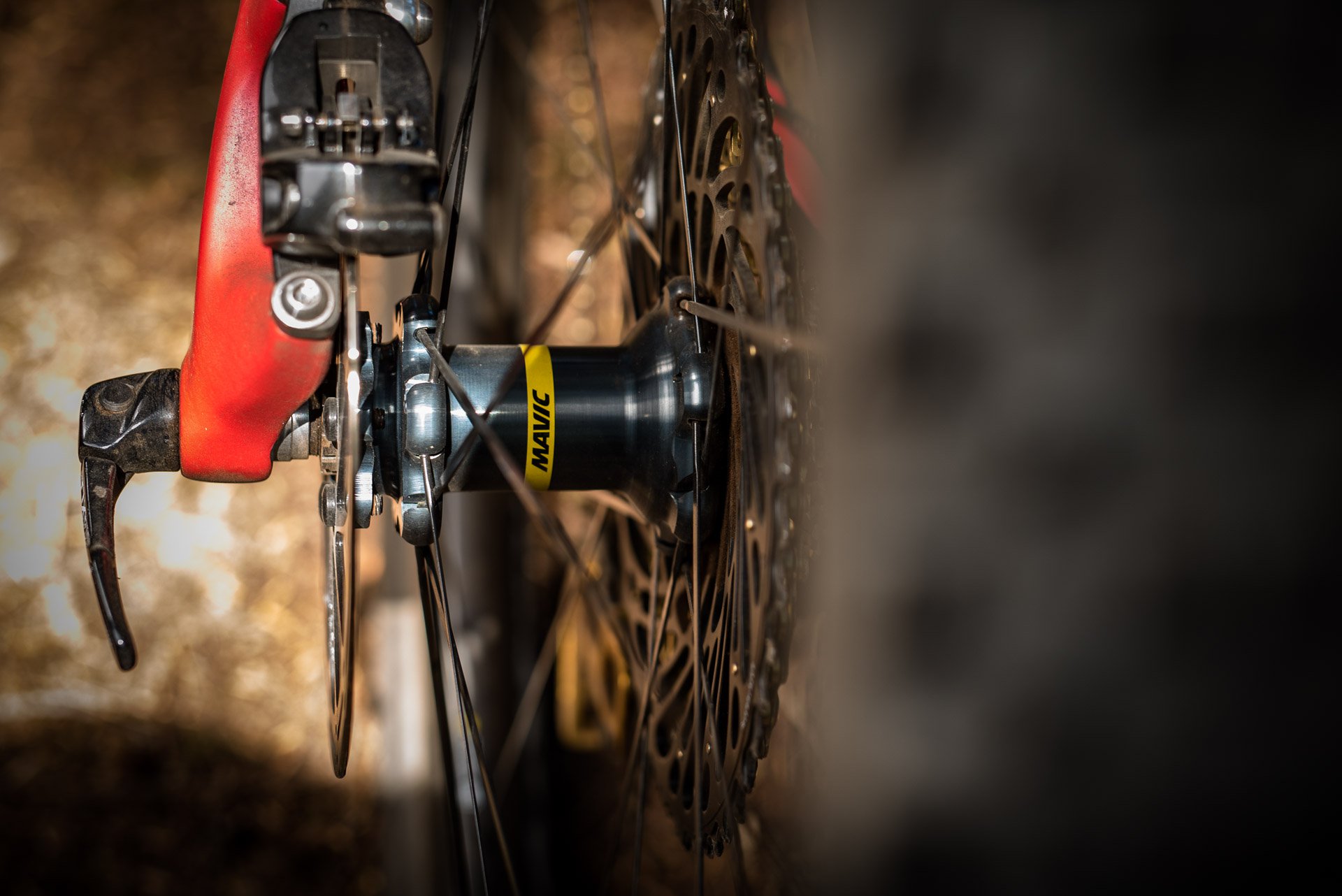 The Mavic hubs are tidy bits of aluminum hewn art. 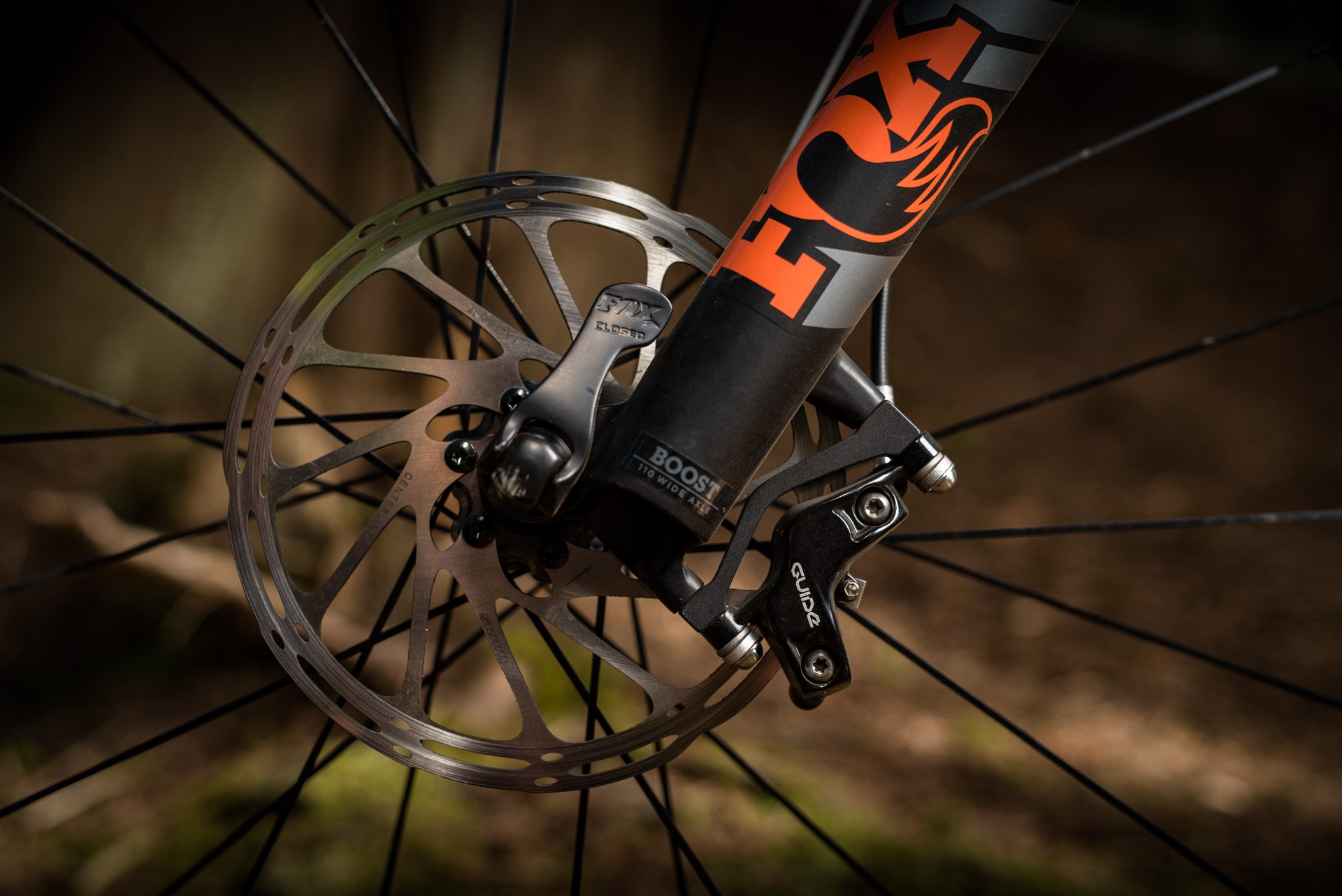 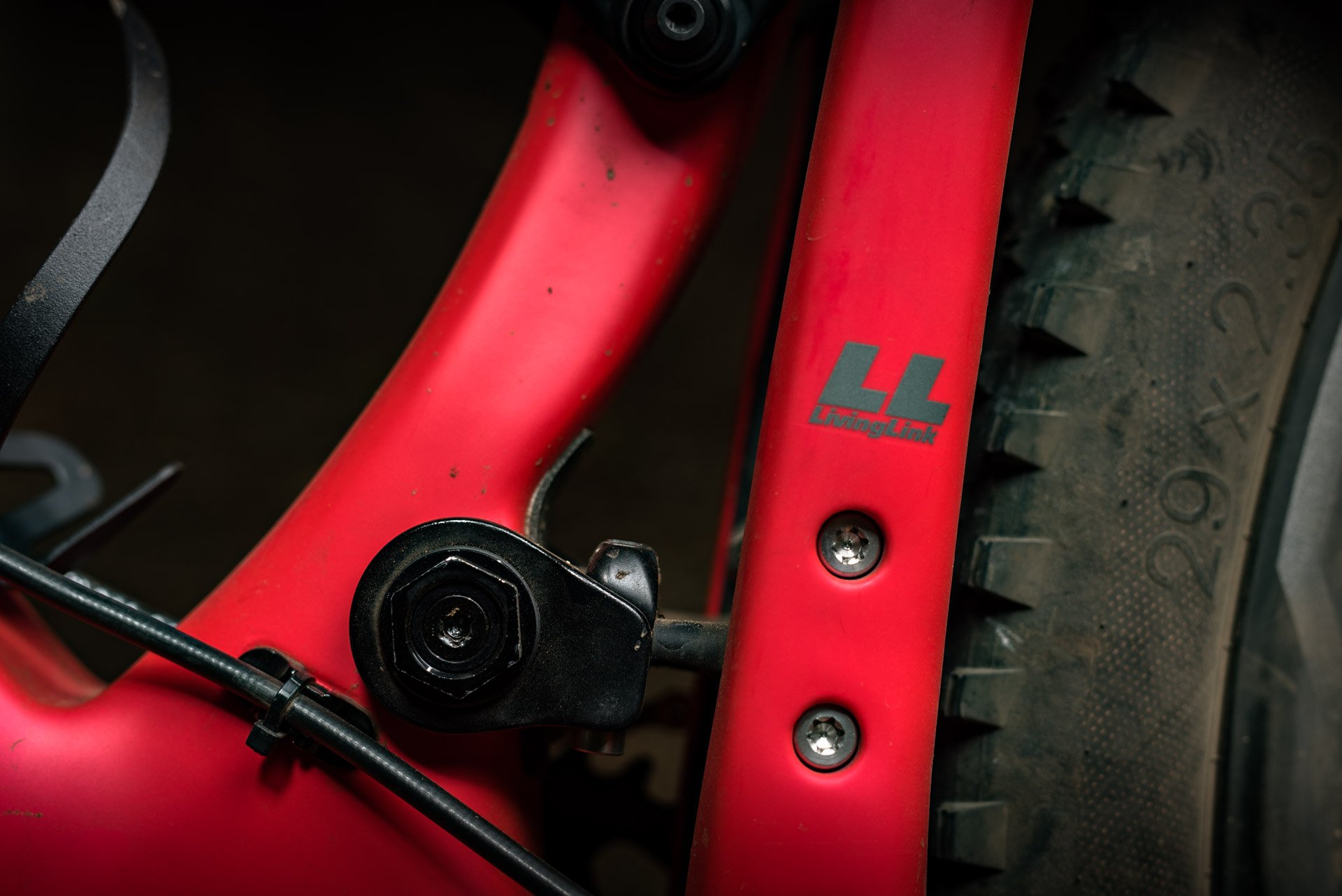 The Living Link attachment - pivoting at the front, rigidly bolted to the rear. You'll need some Torx bits in your toolbox if you want to tear down this frame. 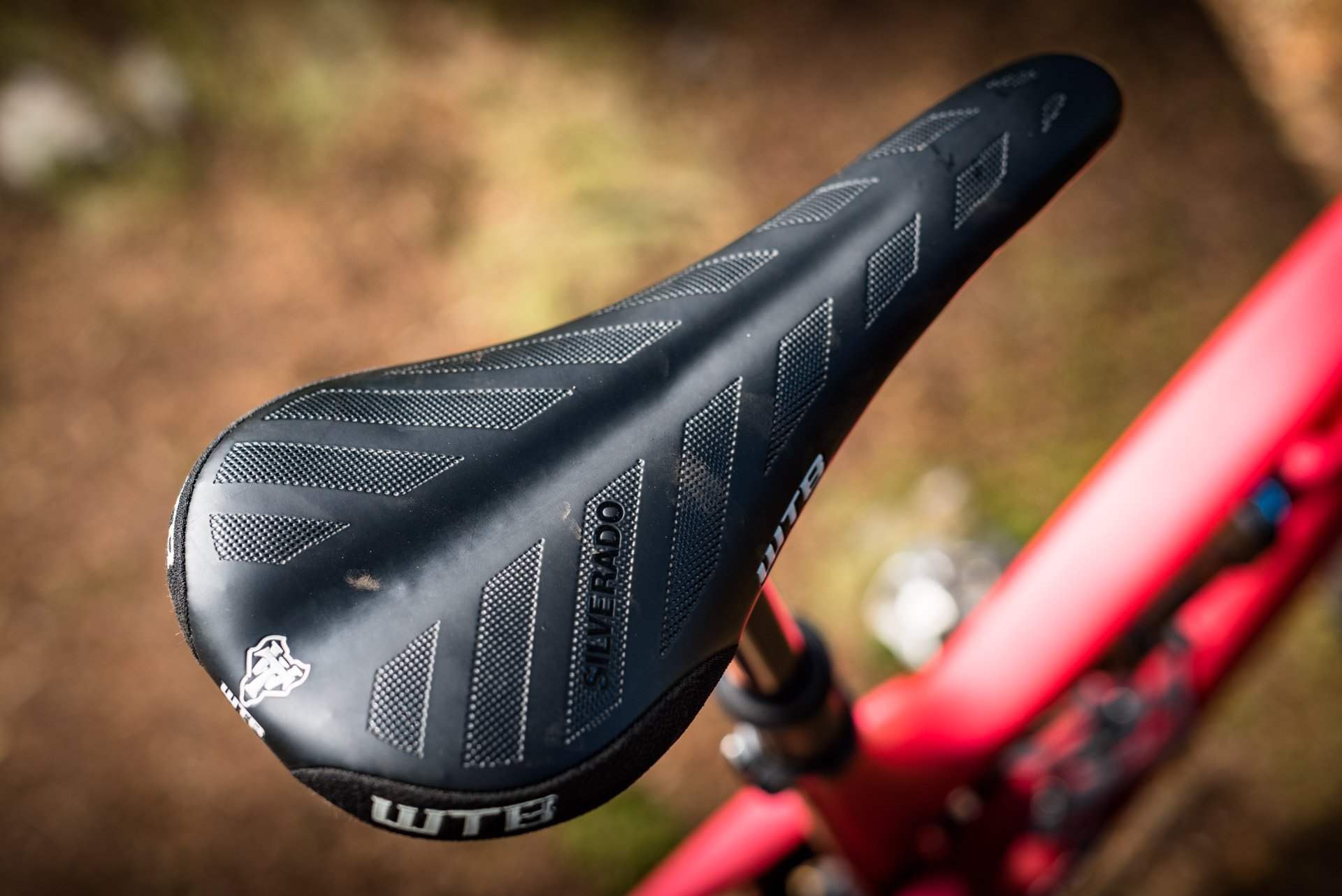 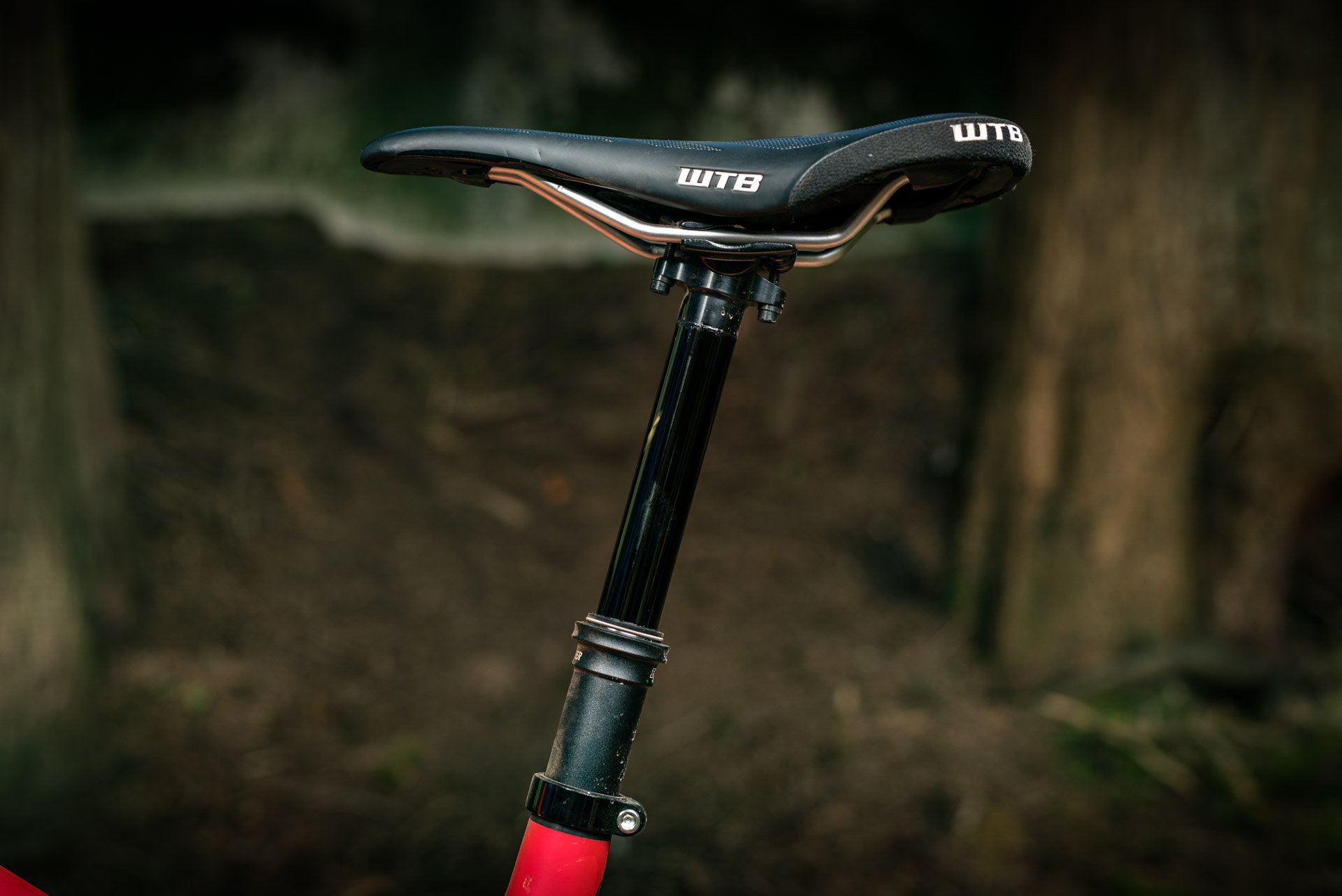 And the 150mm drop Fox Transfer Performance Elite post on which it perches. 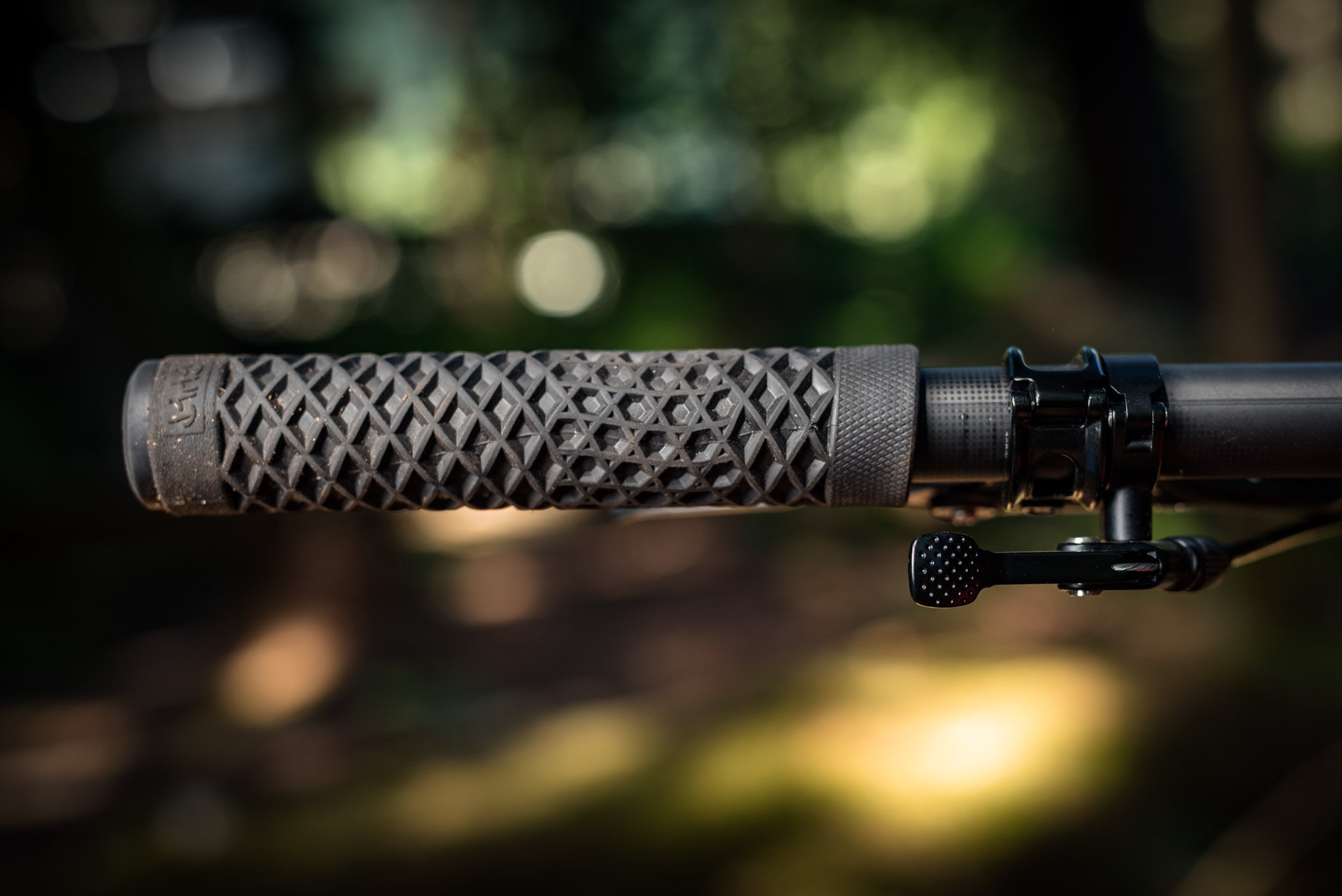 You don't see slip-on grips much these days. A nice bit of cush from these ODI Vans waffle grips. The Fox dropper release lever is an adequately ergonomic thing. 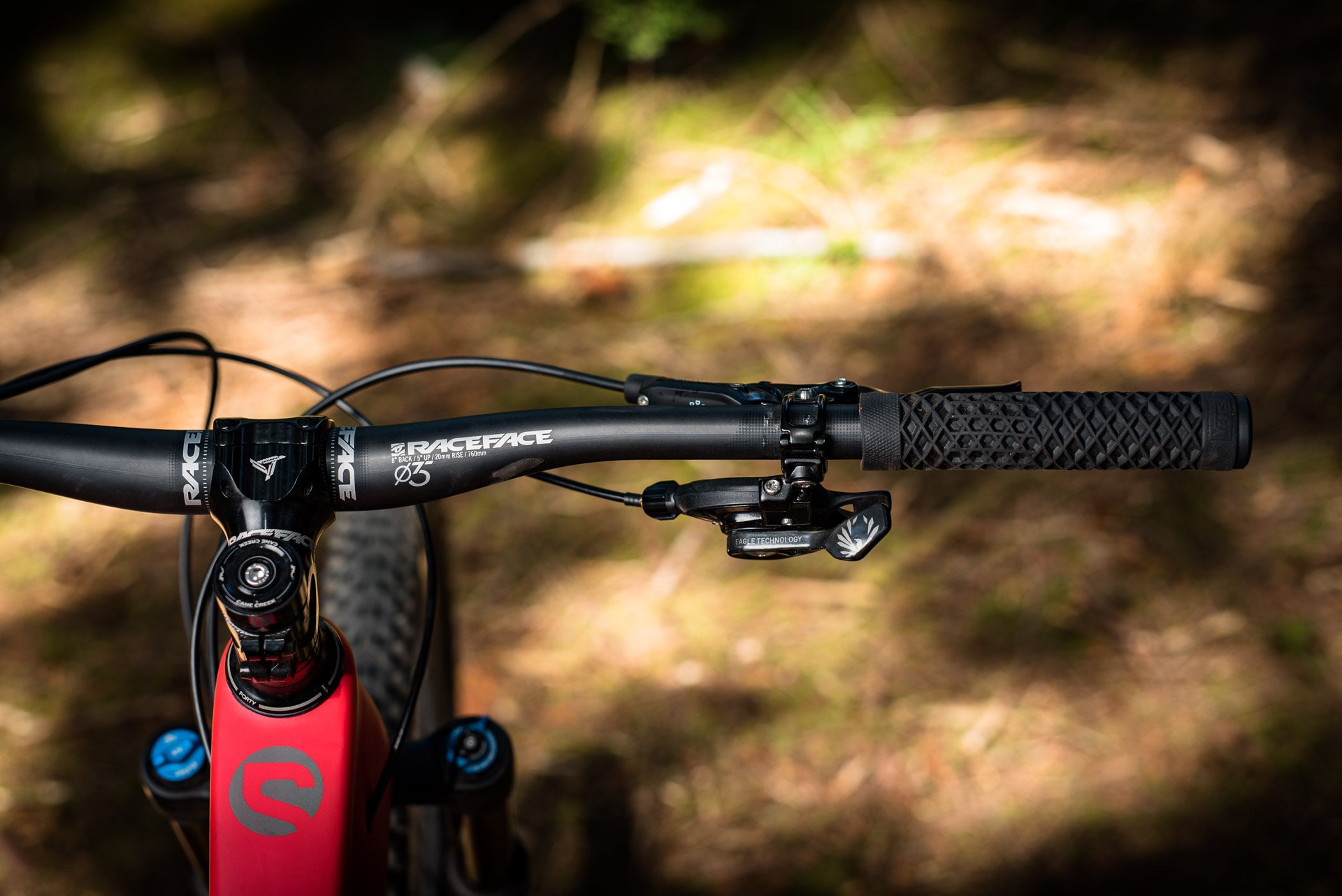 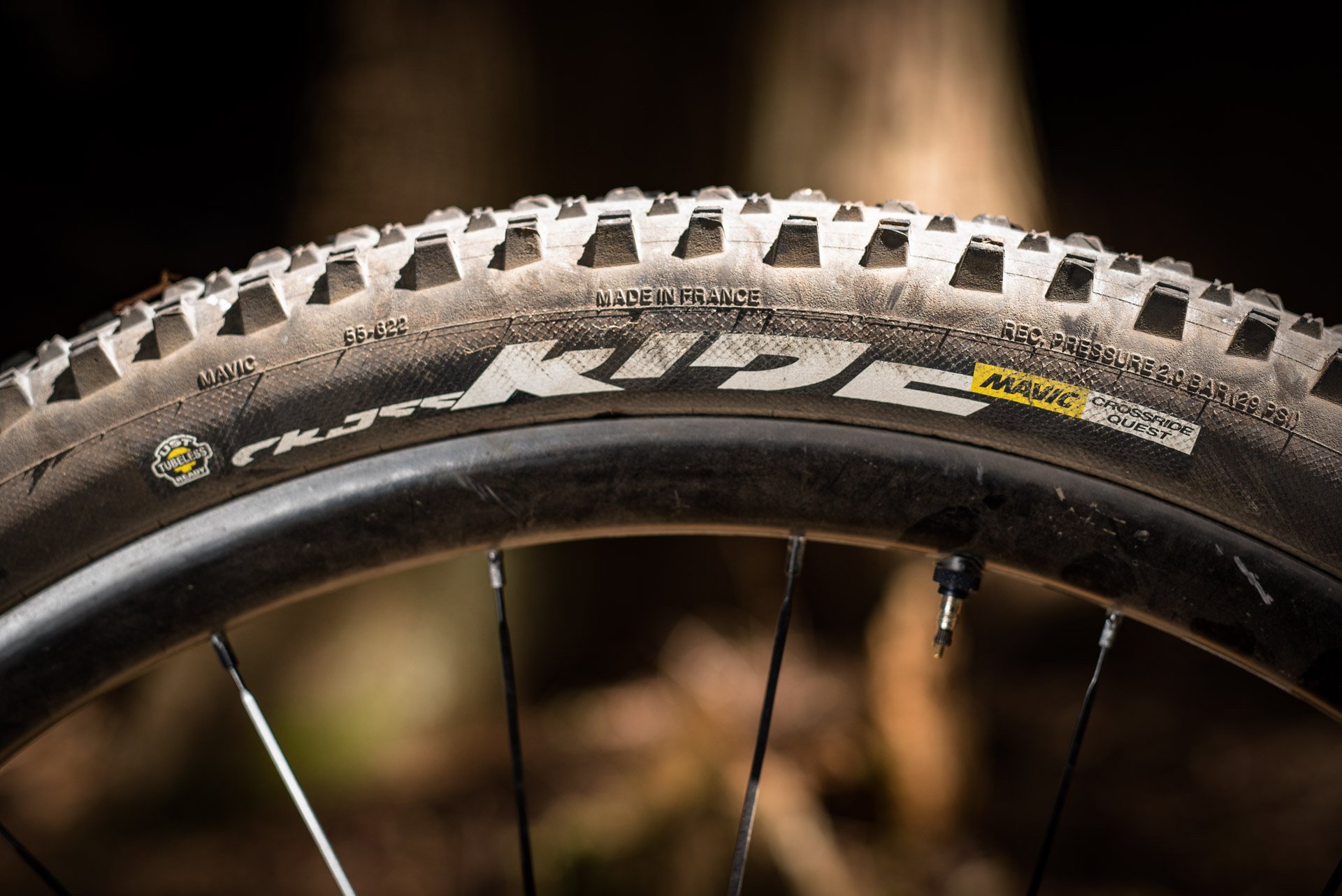 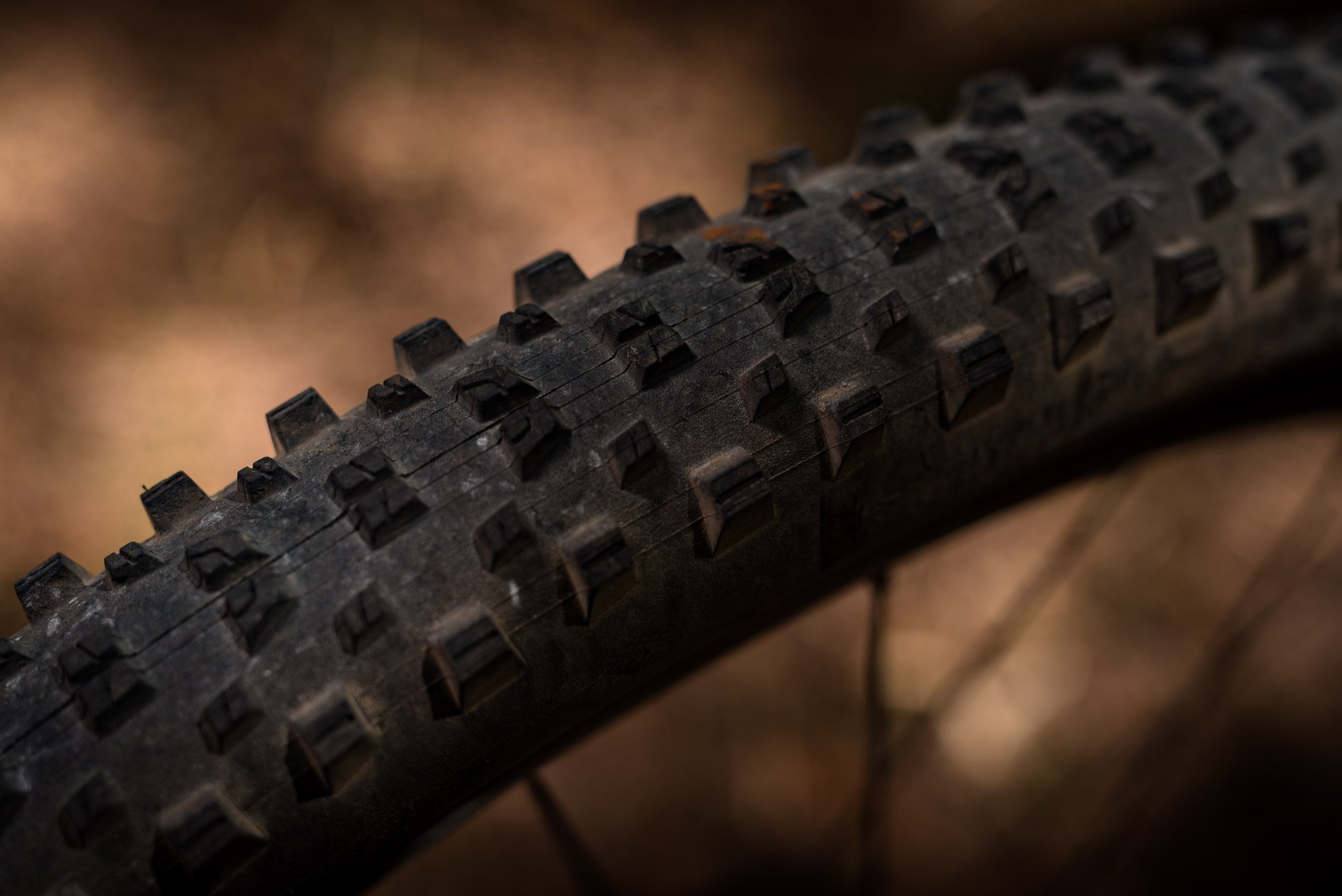 Behold the knobs of the Mavic Quest Pro 2.35 tire. After a couple near death experiences, I've since swapped the front to a more aggressive tire.

Hoops
Wheels and tires are c/o Mavic. The XA Pro Carbon wheelset sports (unsurprisingly) carbon rims laced to a diminutive 24 straight pull bladed spokes, front & rear. The nicely sculpted hubs are Boosted, as is de rigueur. At a 26mm inside width, the rims aren't terribly fat, but they provide a nice profile for most tires you're going to run on this bike. Advertised weight for the bare wheels is a svelte 1590g. Tires are Mavic Quest Pro 2.35's front & rear. The bike was delivered set up tubeless. 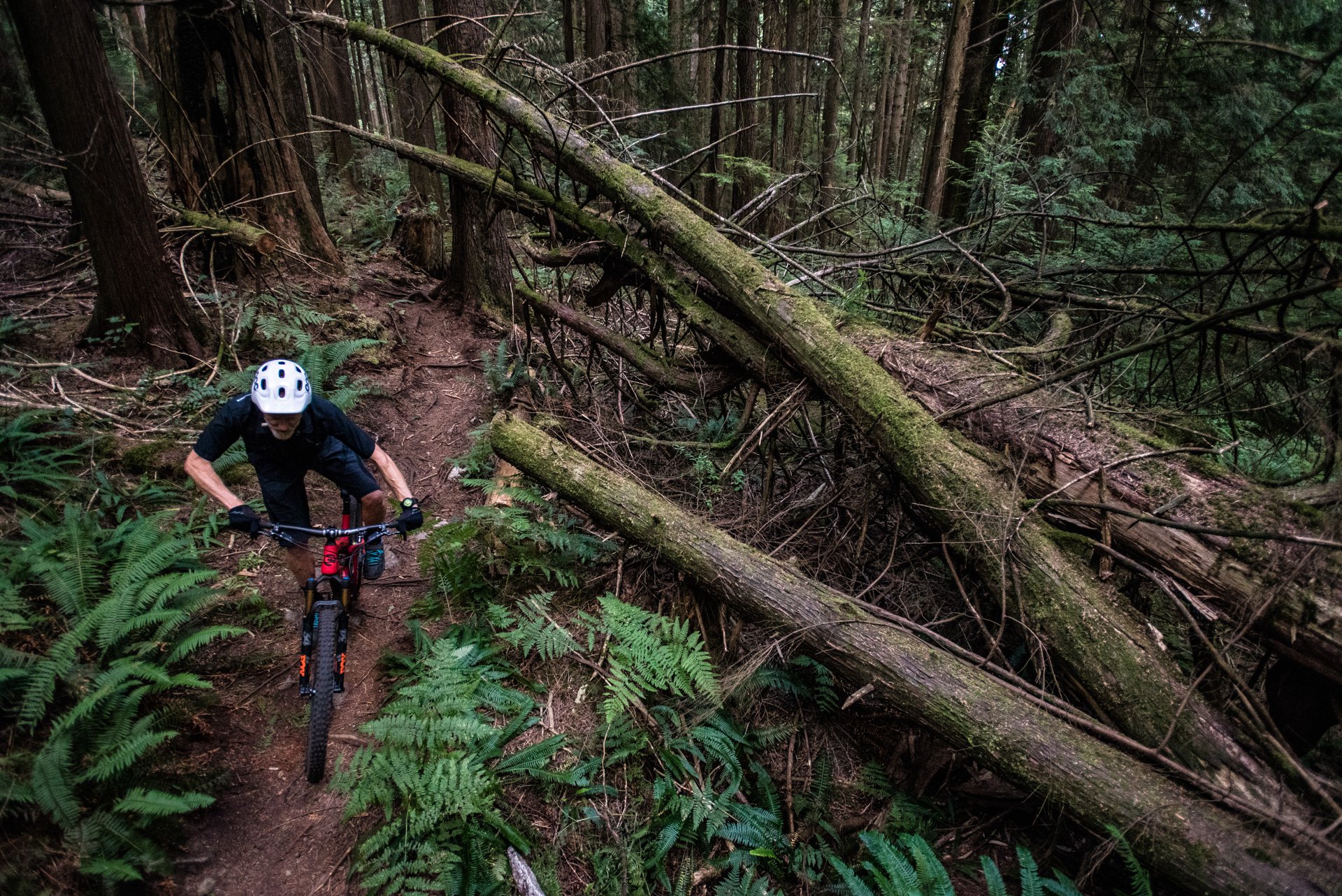 A sprightly climber, this be.

The Living Link platform is a short link 4 bar with a twist: in place of a lower link with bearings  at each end is a short carbon leaf spring that pivots at the front triangle, but is rigidly affixed to the swingarm, requiring a bit of flex to achieve the full range of motion throughout the suspension travel. It's a fascinating bit of tech. It provides several design opportunities: eliminating a set of bearings, providing a more laterally rigid interface, and most interestingly for me allowing for a secondary mode of shock spring rate tuning. 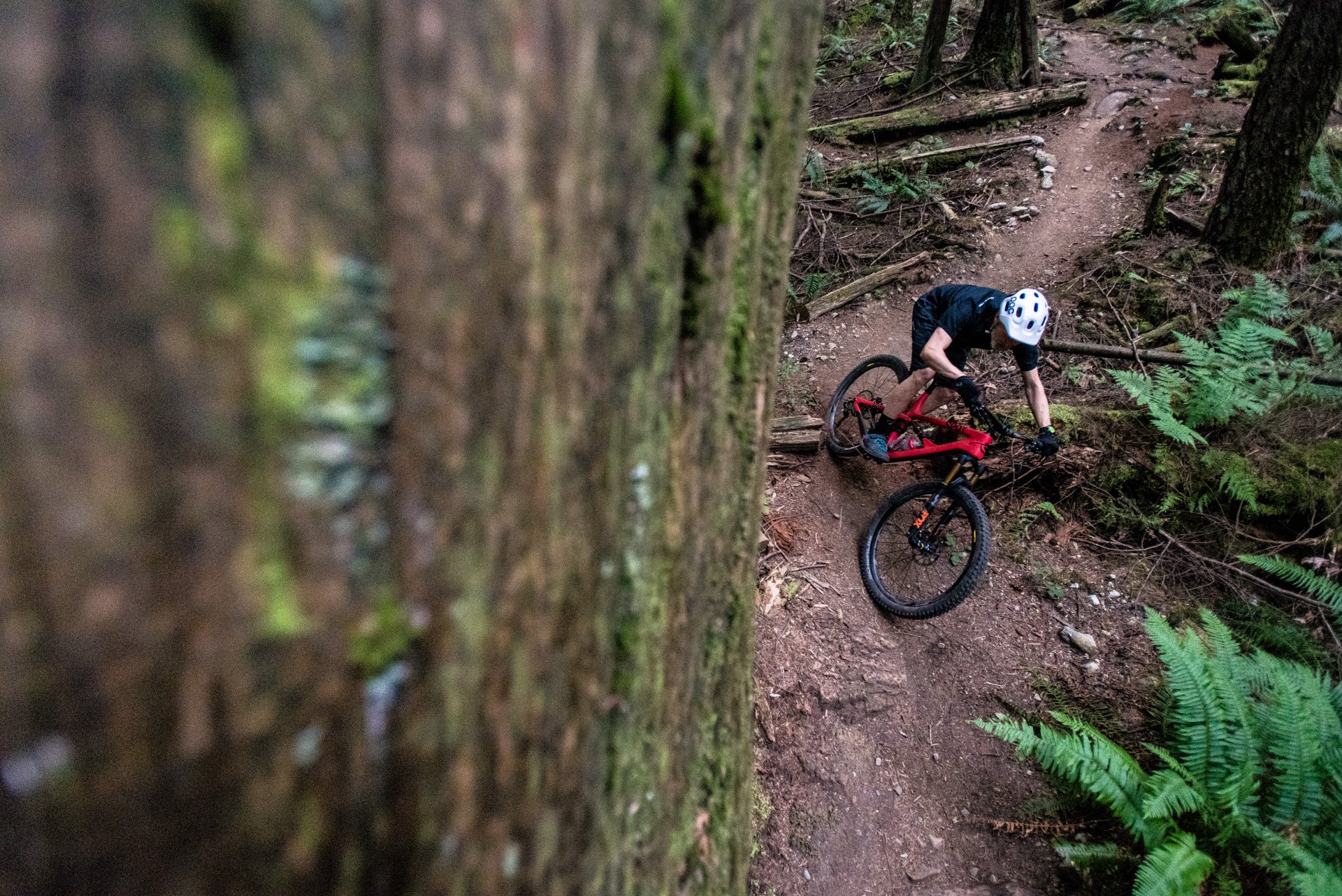 The Mayhem in its element.

I pulled the shock off to get a feel for what was going on down in the nether regions. It's pretty unique. Unlike a conventional linkage system that will cycle through the travel freely, there's a bit of spring resistance as it moves through the travel - the rate ramps to around mid stroke, then diminishes towards bottom. The force to overcome the leaf spring flex isn't significant, but it's certainly noticeable. An impressive bit of design nerdery employed here. In a nutshell the leaf spring is at maximum flexure around the sag point to mid travel range, giving the air shock a bit more support where it (traditionally) needs it the most. 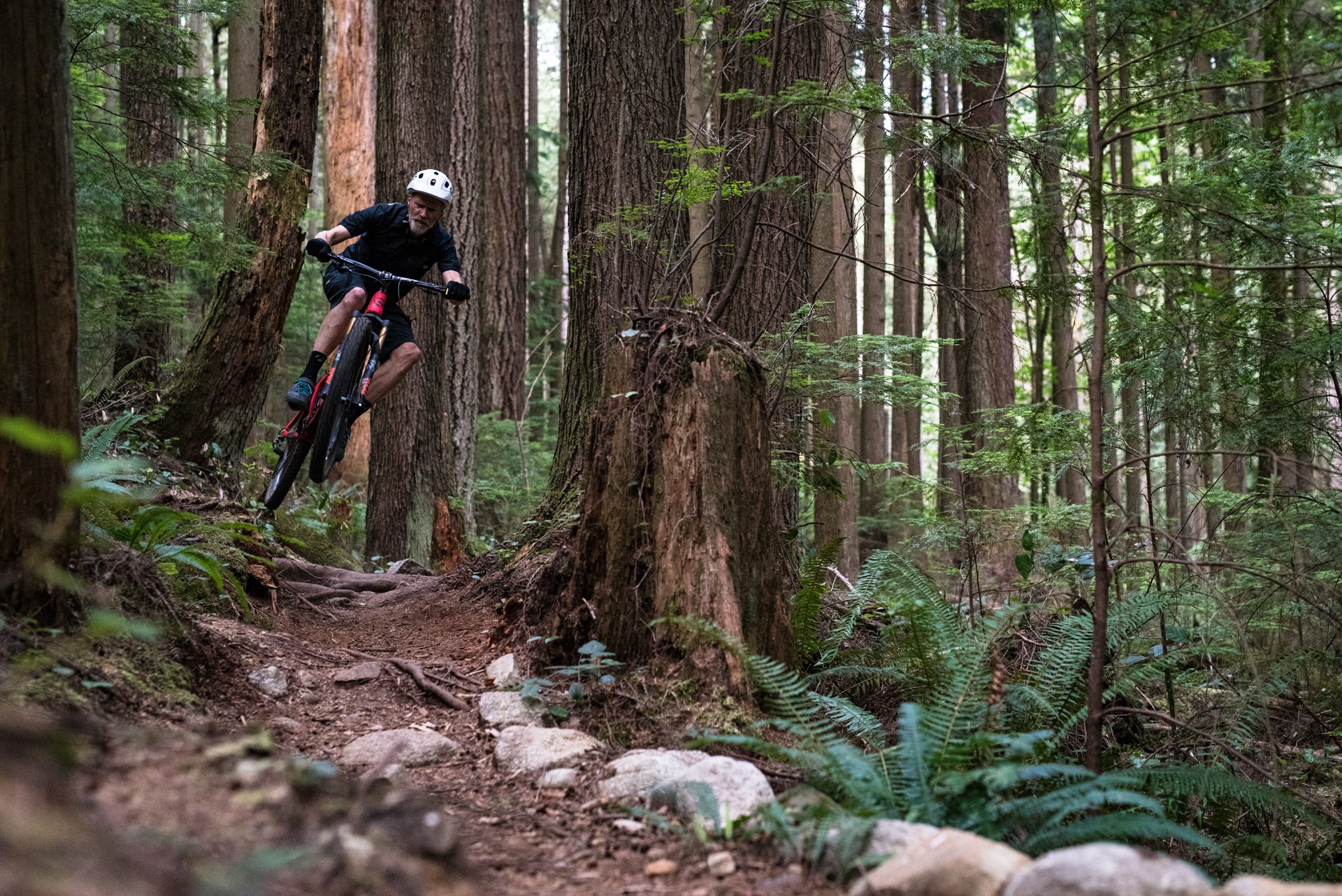 How this novel suspension platform works in practice I'll address in detail within the scope of my long-term review, but first impressions are positive. Said midstroke support gives the bike good pop, making for a fun, efficient pedaling ride. Despite its shorter travel, the Mayhem plays well at the aggressive end of the trail bike spectrum. I'm looking forward to spending more time on board and will return with a detailed ride report.

For more check out the Spot site.

Just FYI, the link on Perry's name to his instagram at the beginning of the article is spelled wrong and it's a super spammy site I was just redirected to, not instagram. 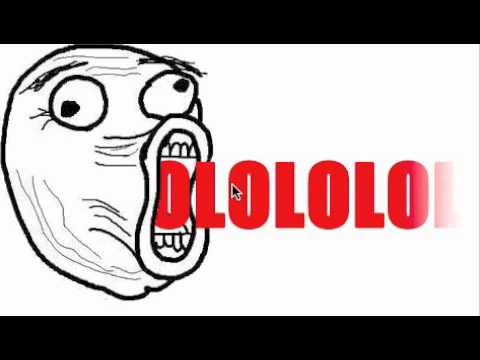 what, you guys don't have Instaram accounts? InstaGram is so passe.