Chris Cocalis called it a Nomad killer. The 2017 Pivot Firebird’s aim is to be a big bike that pedals like a trail bike. It’s got 170mm of travel, a long front end, 27.5 wheels, and a 65 degree headtube. All controlled by a burly DW link suspension platform. 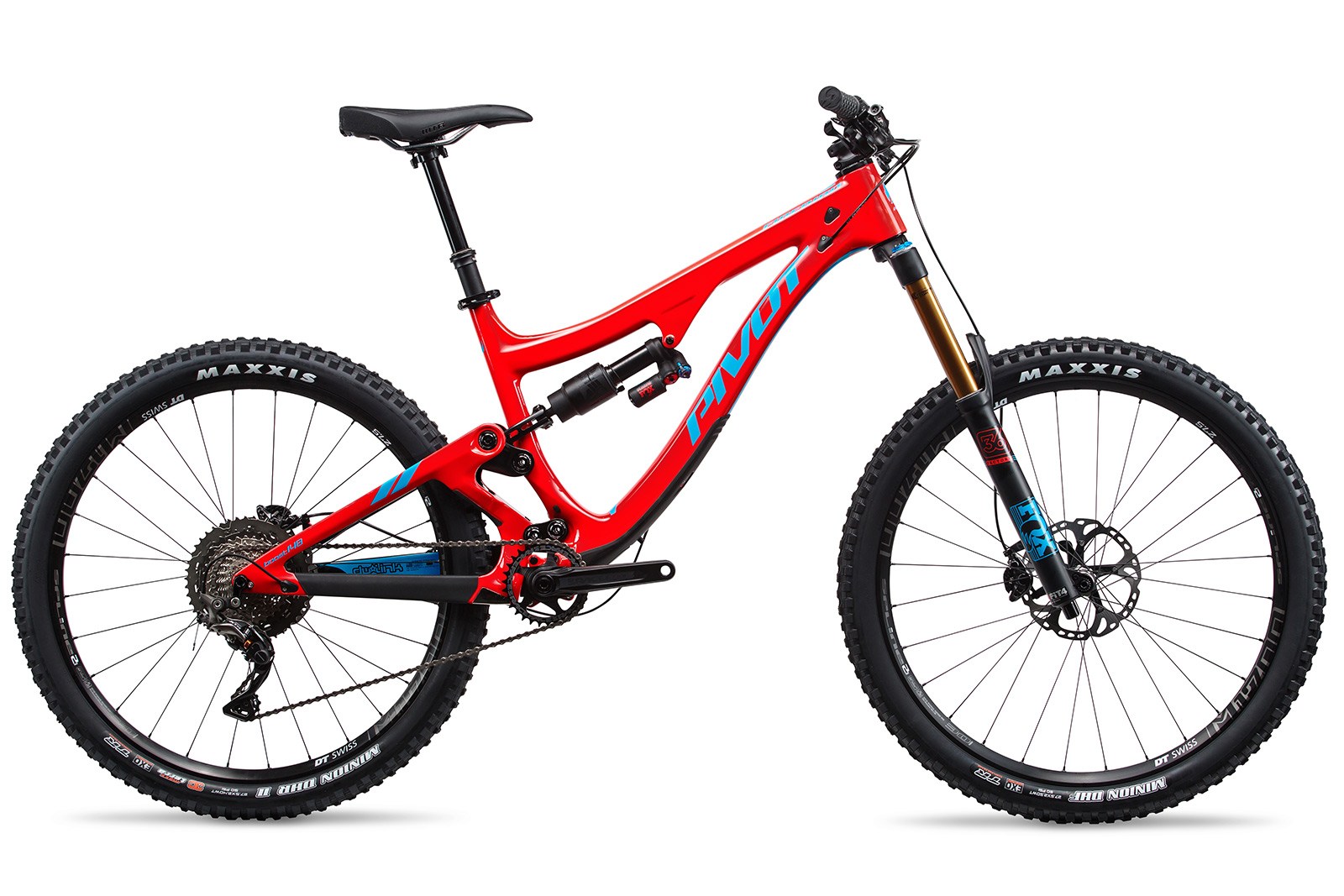 The 2017 Pivot Firebird. Equipped with a custom tuned Fox X2 Air shock on most models and parts kits from the mundane to the magnificent. Photo courtesy of Pivot

The Firebird is heavy on details. Full Di2 compatibility is included with a large door under the downtube. This opening can also help you route housing and hoses. When all the plugs are removed copious amounts of daylight flood through the frame. The term “future proofing” was being thrown around by a few bike designers at Crankworx and the Pivot is a great example of the sheer number of routing and spec options necessitated by products like Di2 and riders’ discerning tastes for cosmetics. 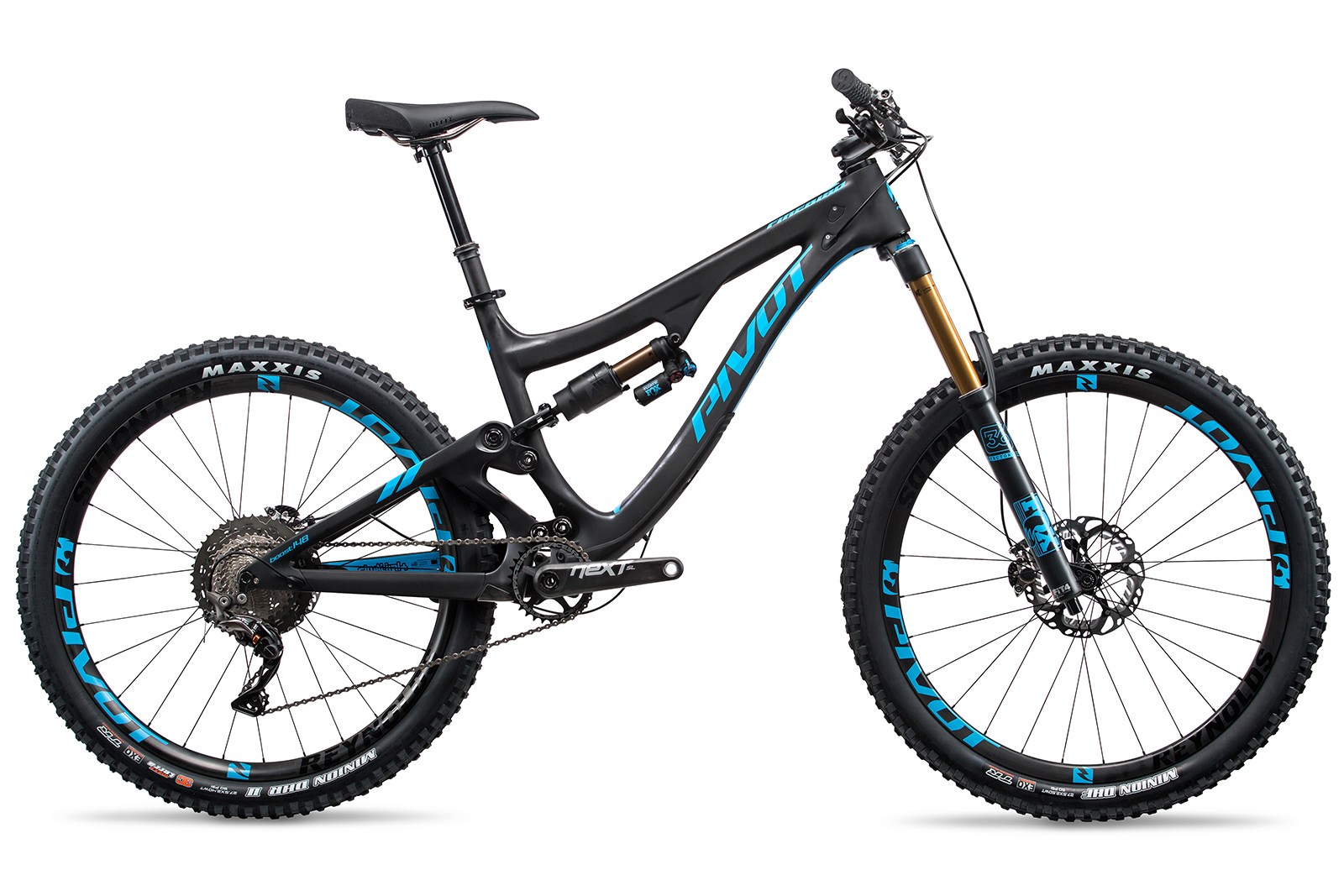 An aluminum option is in the works for the more distant future. 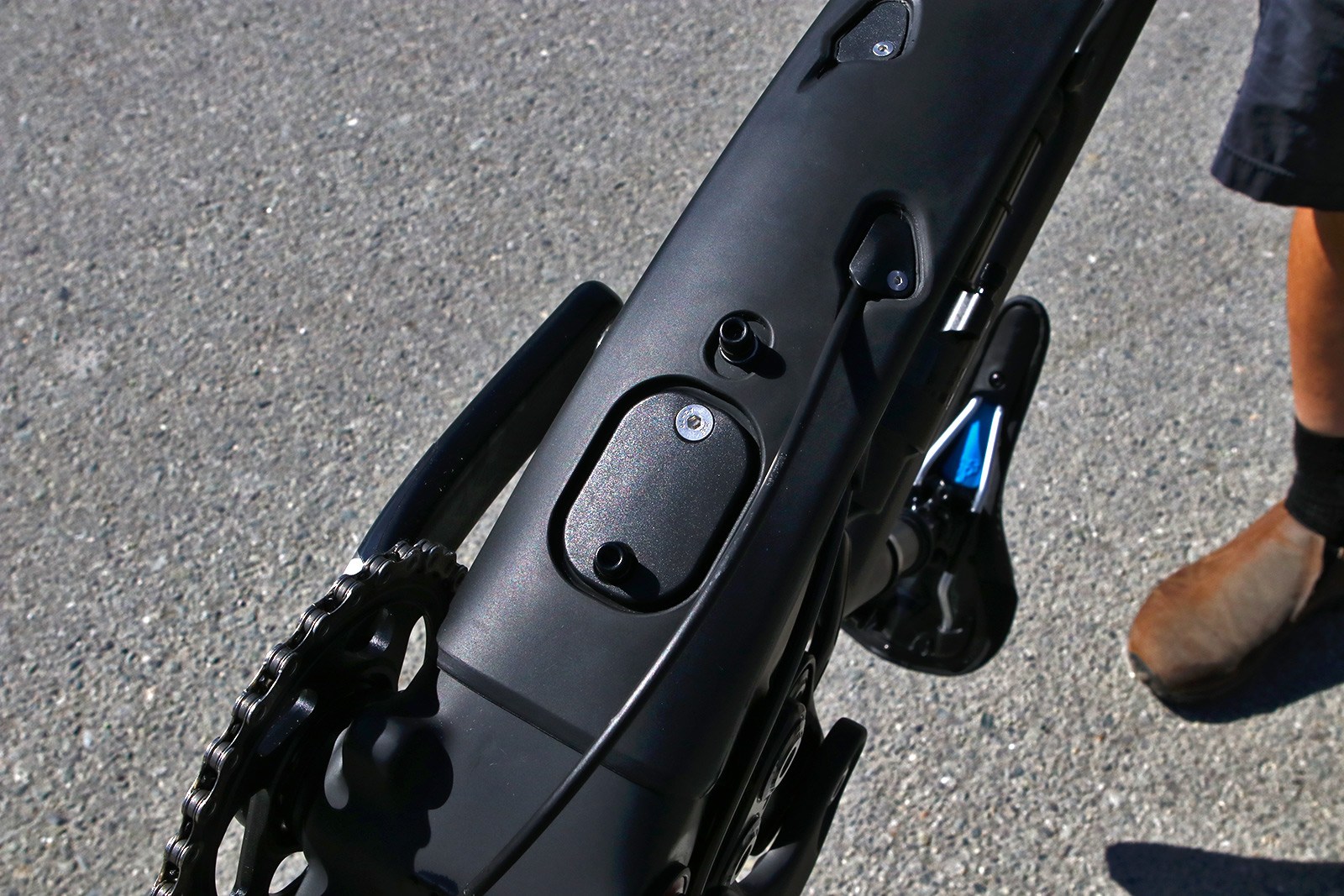 The Pivot Firebird’s very clean internal routing is governed by hatches at the entry and exit cable positions. The cable routing clamps pinch down such that they will prevent unwanted internal rattling issues with noise from contact inside your tubes. 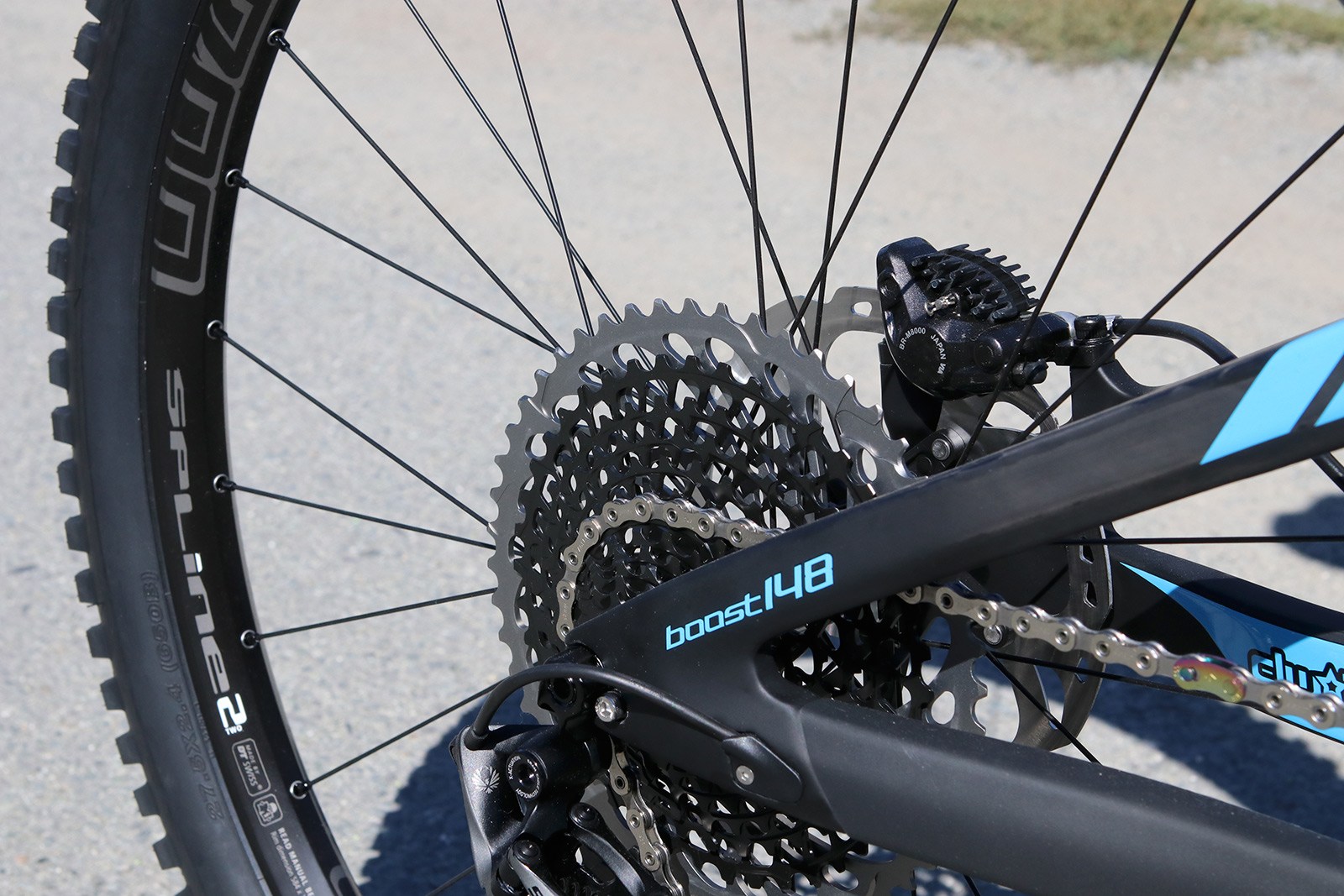 Both spec examples Pivot is showing at Crankworx are 1x. This version is Eagle and the other is XT 1x with the new 46 tooth cog. It looks significantly less elegant than Eagle despite being four teeth smaller.

Pivot did mention that they have played with the internal carbon tube housing guides that some other companies are using; however they felt that performance benefits were offset by the increased weight and limited routing options of the heavier construction. 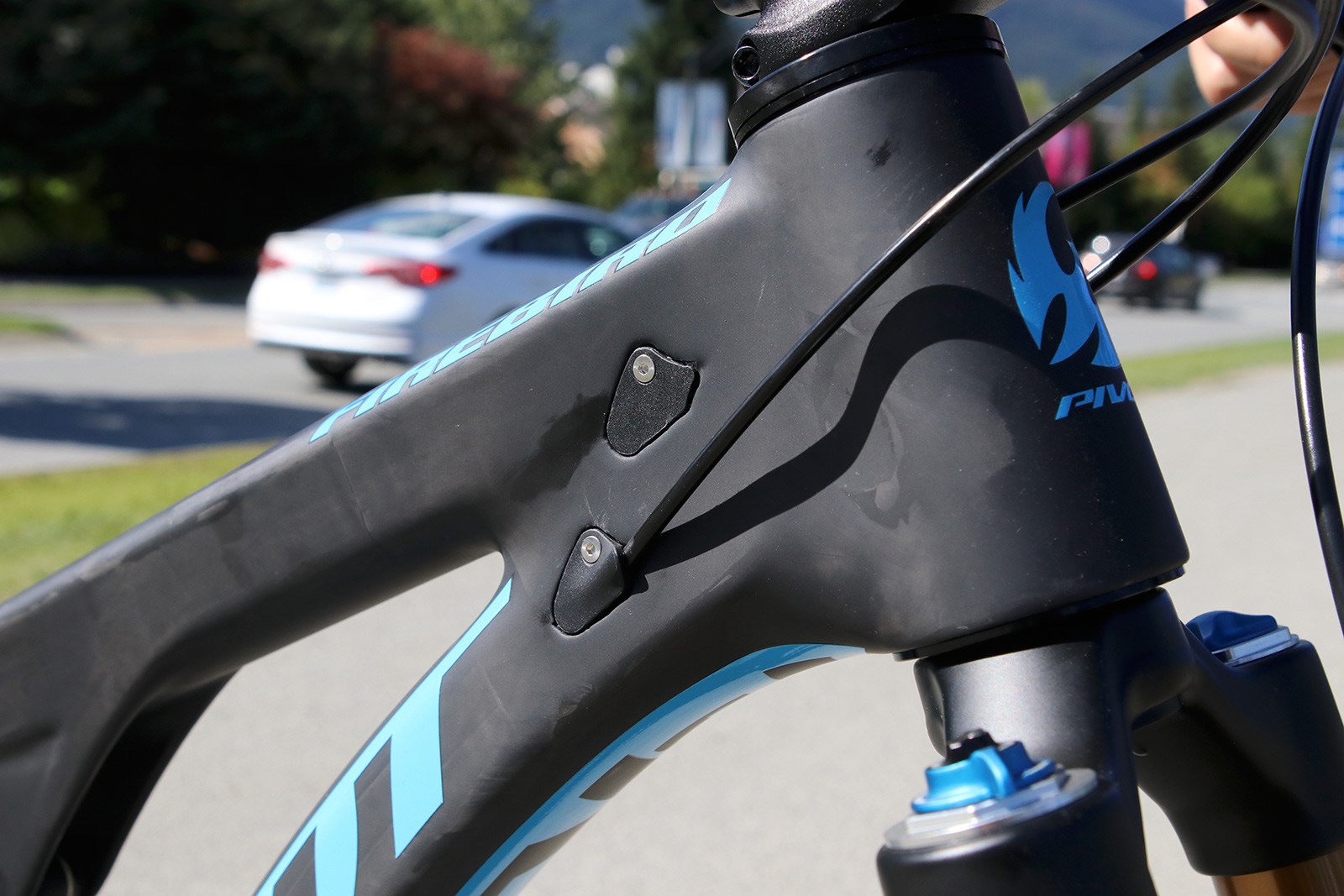 The cable entry ports on the Pivot Firebird tighten down to prevent the cables from moving. The head tube is 49mm top and 56mm lower.

The Pivot Firebird bucks the trend towards 1x specific frame designs and rubber covers hide the mounting ports for the e-type front derailleur. It’s a matter of location as many Pivot riders still prefer to run a granny gear. The new swing type front derailleurs do work extremely well when they are set up properly. 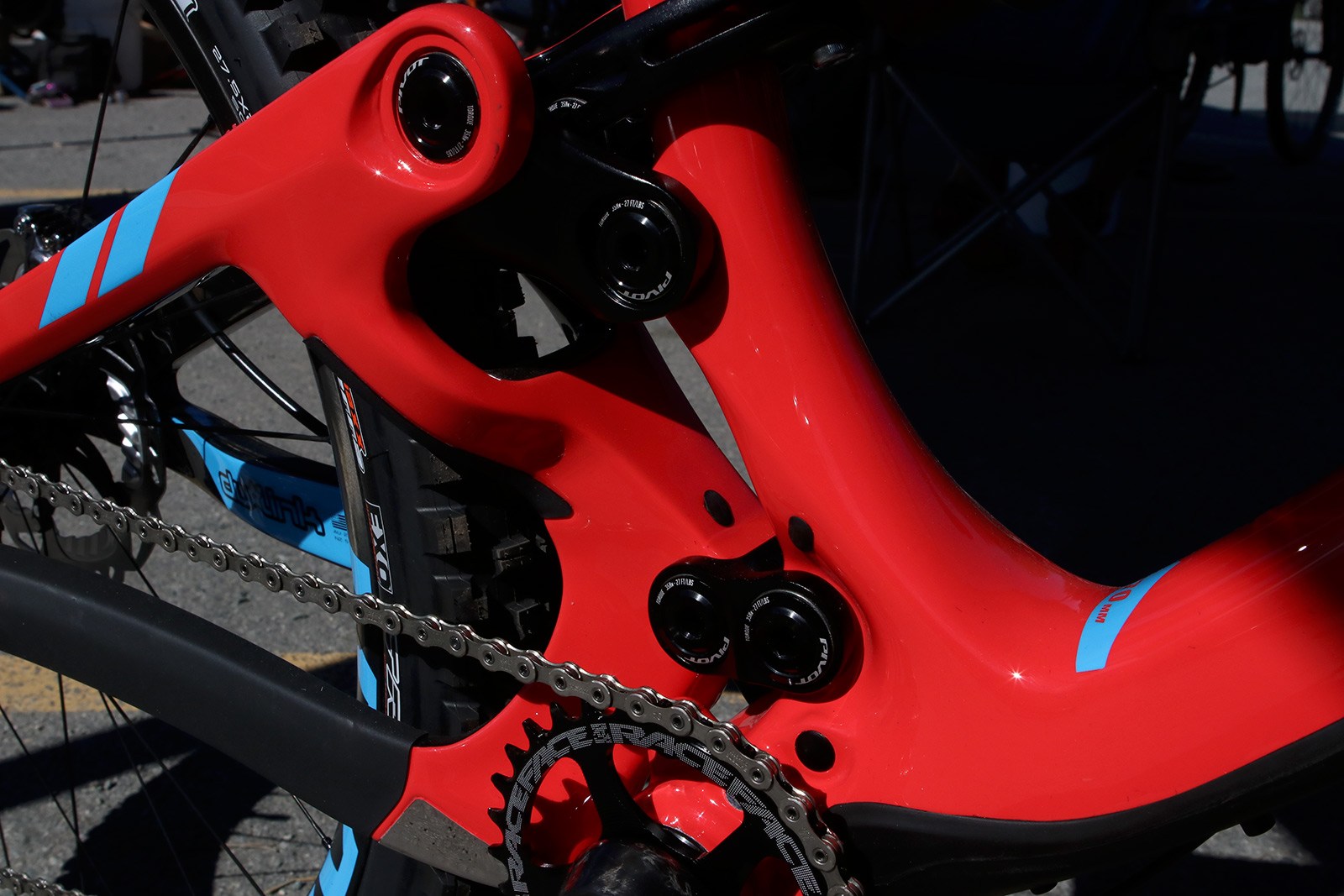 The new Pivot Firebird runs a Boost 148mm rear end vs. the ‘Super’ Boost 157mm rear end of their new Switchblade. Going to a wider hub interface was not beneficial in the way it was with 29ers and the riding width of the bike is excellent as is.

The higher end models come equipped with Factory or Pro level Fox X2 shocks while the ‘entry level’ Pivot Firebird uses a Float-X. In both cases, the shocks are custom valved for the bikes. 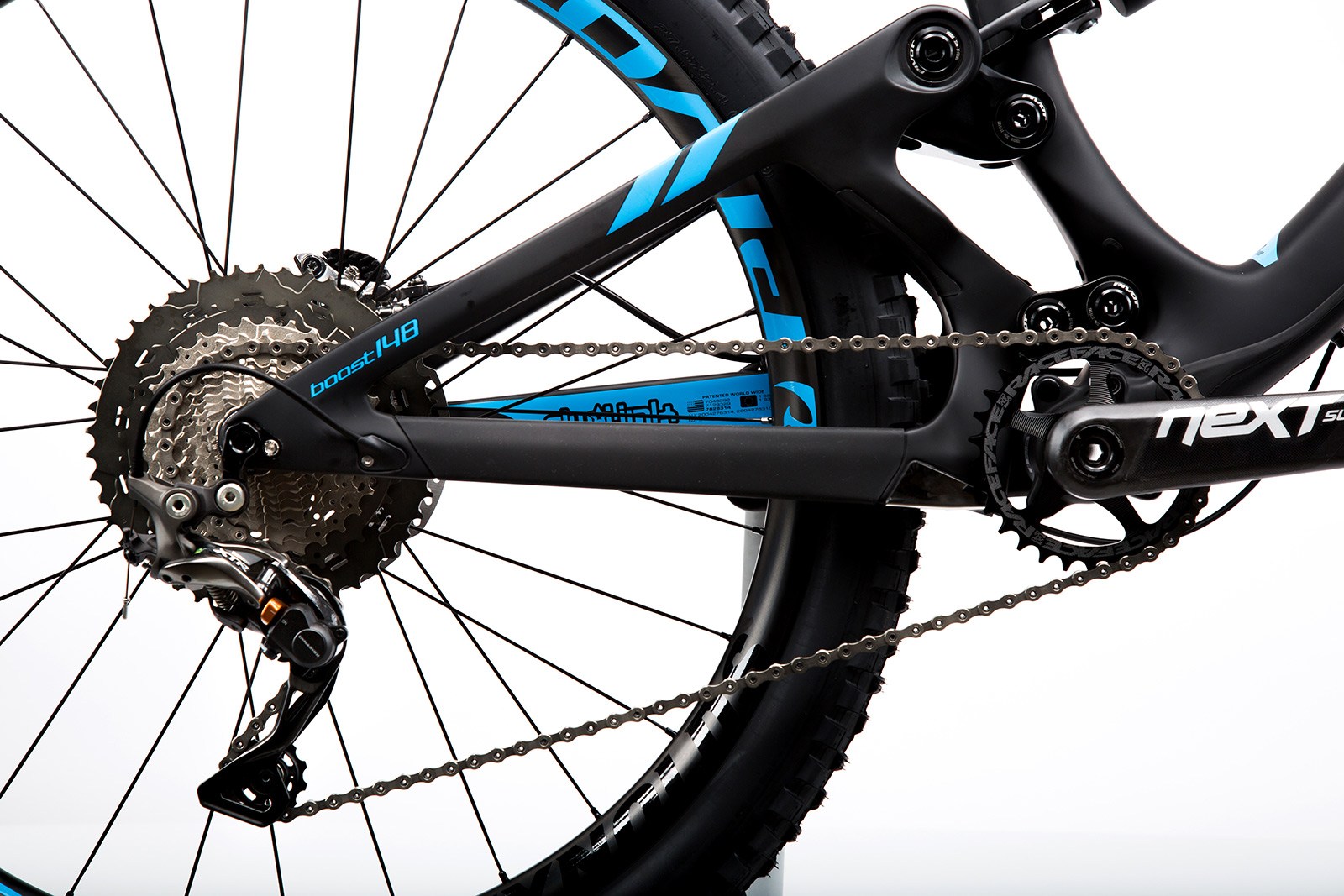 DW Link suspension designed to work specifically with a custom tuned Float X2 shock. XT 46 tooth cassette at the back. The solid appearance of the large cog makes it appear heavy and a little less refined.

Pivot has been on a roll lately with their new Mach 429, Mach 6, Switchblade, and now the new Firebird. On the cosmetic front, in either colour scheme, It’s an exciting refresh and re-design opportunity for one of Pivot’s earlier models.

Both up and down fast?

Biggest weakness of the Pivot tent at Crankworx was no demos of any models other than the Phoenix! Really, you drove all this way and assumed that people would not want to test ride the Firebird and Switchblade given that there is almost no brand representation in the Sea to Sky corridor?

I was talking to Pivot about the Switchblade and demand has so exceeded production that they have been air shipping frames as soon as they are available. It was going to be ~ another month before they'd have enough inventory to supply demo bikes for reps and shops, ship larger batches of frames, and also catch up on customer orders.

A great problem to have for sure but I know a lot of people would have loved to throw a leg over either of the new models. I'd be surprised if Obsession: Bikes and Kinetik didn't have demos once the new models are on their sales floors if you're down in the city. I'm sure Pivot will have a bigger compliment of test bikes next year.

The Firebird is brand new and they simply didn't have enough bikes ready.

Not really the point is it though. The major Western Canadian/ Pacific North West event of the year & they did not pull eight bikes together to allow size range test riding of their two newest and most heavily advertised models. Riders (who are potential buyers) travel to Crankworx to demo bikes all week befor they then go and watch events. Stock eventually being available in some shop in Vancouver which is an hours drive from a proper trail is not really close to providing the same experience. I spent a bit of time pfaffing in the area of the Pivot tent and there were a lot of disappointed potential customers who then went & demo'ed other brands. I am guessing that because most riders buy based on a recent positive experience , especially if thy are dropping $7-9k on a bike, that many sales will be made, in the coming weeks, with other brands who did provide demos. Not a criticism as I don't have any personal interest in Pivot other than wanting to try their two models so I had a base line comparison to help my riding guests who ask me these types of questions (eg how does the new Switchblade compete to a Nomad or Hightower?) but I was rather surprised.

Fair enough. I guess my point was if they could have pulled demos together they would have… I'm putting words in their mouths but I'm sure it is disappointing to make the huge investment in coming to CrankWorx and not being able to demo your two hot new bikes.

At the same time, I know from years working in shops that the number one priority is filling dealer orders especially when there are riders with deposits down.

I drove two hours to test ride a new Firebird at Crankworx - after hearing my sob story, the crew at Pivot allowed me to take one out for a couple of hours. I climbed up Whistler Mtn. and rode a mix of jump/flow and technical trails. This is the best bike I've ever been on. It climbs better than the YT Capra (which I rode right after), and is very plush on the downhill. It was easy to jump, very planted on the chatter - just a really confident ride. There was no 'getting used to' this bike - I was at home immediately. I felt more confident on the downhill than the Transition Patrol I tested last month. The parts spec is perfect - nice to see Fox suspension. I just rode the same trails today on a Specialized Demo 8 and the Firebird handled the chatter better. Cost is the only downside - this bike retails for $8100 CND (XT Pro build).

I know cost/value is most often measured by comparing build kits but I have to say the fit and finish (the small details) on Pivot's frames blow away a lot of other bikes.

To me they are expensive but I can see the places they don't cut corners that other brands with better build kits per dollar (not necessarily better value), even if the bikes are equally fun to ride, sh*t the bed.

Not sure why PIvot went with the big loop of housing below the BB. That's just asking for trouble.

I guess it doesn't bother me because I've known so many people with Specialized bikes with under the BB routing over many years who've never had an issue.

I like that there's no frame contact. In hindsight I wish I have let the pressure out of the shock to see if it has to be as long as pictured to accommodate the 170mm travel.

I spent 3+ seasons on an Enduro 29 with a similar loop and never got it hooked on anything. But yeah it's not pretty.

I snag sticks all the time and I don't have a low loop of housing on my bike. It depends where you ride.

why would you reference your new bike as a killer of any competitor's models? no class. reading the copy on Pivot's website, i find them brash and arrogant. i'm sure their bikes are excellent, but they have no appeal to this rider whatsoever.

It makes sense to target the category leader(s) - arguably the Nomad and maybe the new Enduro if the suspension performs more like the 2013 26″ version than the first 650b models - but you're right it does sound really cocky.

It's funny because talking to Chris Cocalis and his wife you definitely do not get that impression at all. Confident: yes. Truly excited about designing bikes after doing it for years: absolutely. After long days in the sun I can't think of any designers or product managers I have met who are as interested to discuss the minute details and ideas behind their designs, manufacturing challenges, inventory, and etc in blunt but friendly terms.

Anyways, maybe that's too boring for the marketing platform that is the website but I'd have to say that Chris is very confident in his bikes but actually one of the least cocky, brash, arrogant, or rigidly opinionated bike design guys I've met.

I'd agree with Drew on his opinion of Chris. For the Mach 6 review he and I had a good 30 plus mins conversation on the design and picking each other's brains on our thoughts of bike design, process and manufacturer etc. It's great to get direct contact like that and have someone so passionate about his bikes. It certainly was really educational for me.

Saying that is a compliment to Santa Cruz. You are only gunning to beat the best in class product.

best in class is entirely subjective. there's about 10 bikes globally that would vie for that status in this category.

Of course it is. That statement is clearly an opinion which is by definition subjective. There is no arguing the Nomad's popularity nor its pedigree regardless of the fact there are certainly other fine AM+ bikes in the same category.

I agree. The guys at Pivot design nice bikes, but talking smack like that truly puts the "ass" in "class". My $ goes elsewhere

Yo. The float x2 is not a coil shock and it is not made by Shimano. Thanks!

Thank you Alex. I apologize, this one was a late rush for me. Thanks for reading.

Hi,
I also think you wanted to write that the light floods through the frame, not the fork, if you remove all plugs 🙂

Thanks Reini; I promise I'll have a nap before today's Crankworx additions!