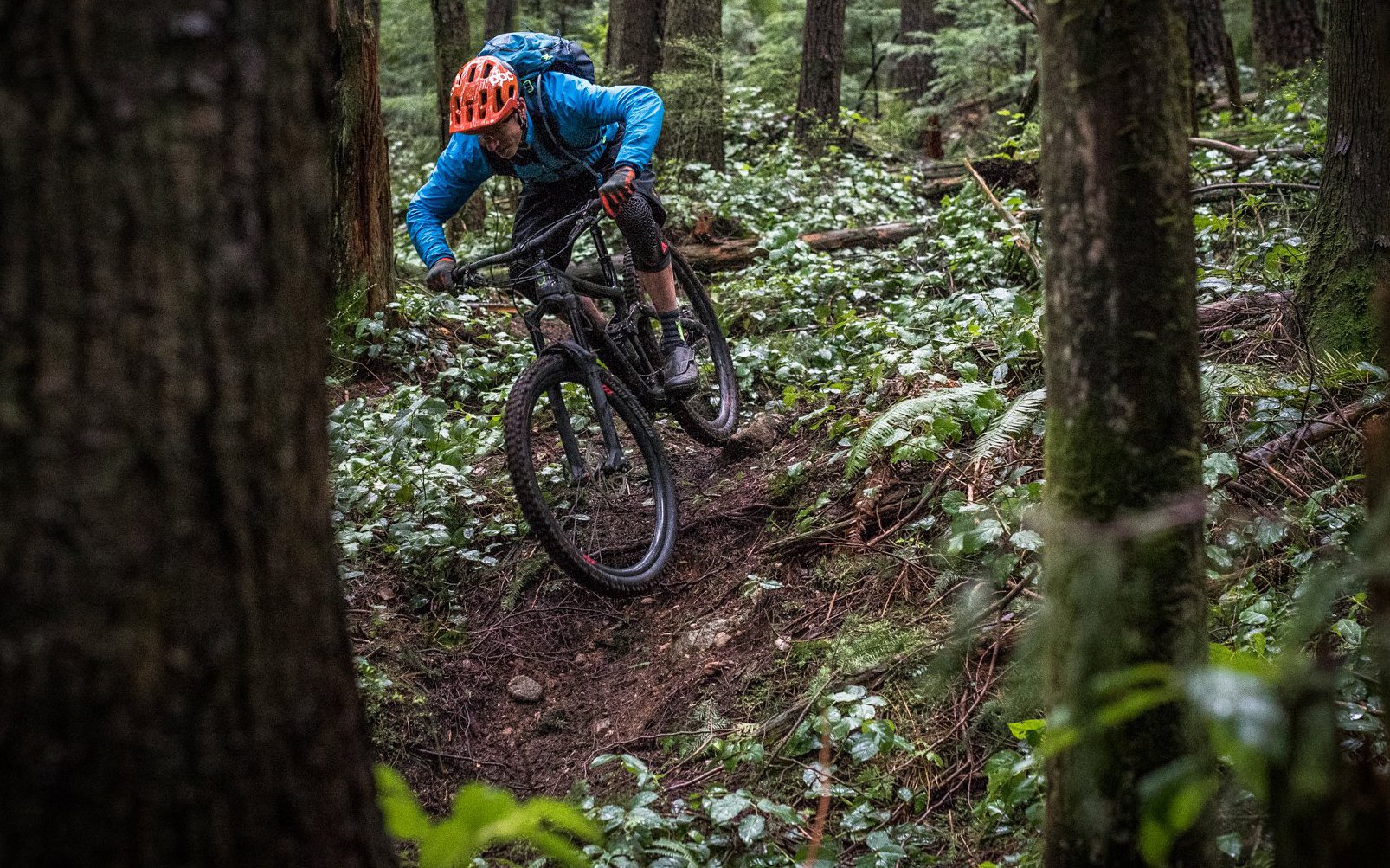 Fear is a good motivator. Hordes of riders who hate racing, sign up to compete months in advance just to scare themselves into shape. Amortizing pain over several months is preferable to having your femurs ripped out on some lonely steaming climb. I see them in all kinds of weather. On four or five snowy and rainy rides this winter I ran into my friend Jordi who was training for the Trans Costa Rica enduro, and I saw virtually no other riders on those days. My motivation wasn't fear, it was getting out on the Range Carbon 29er, weather bedamned. 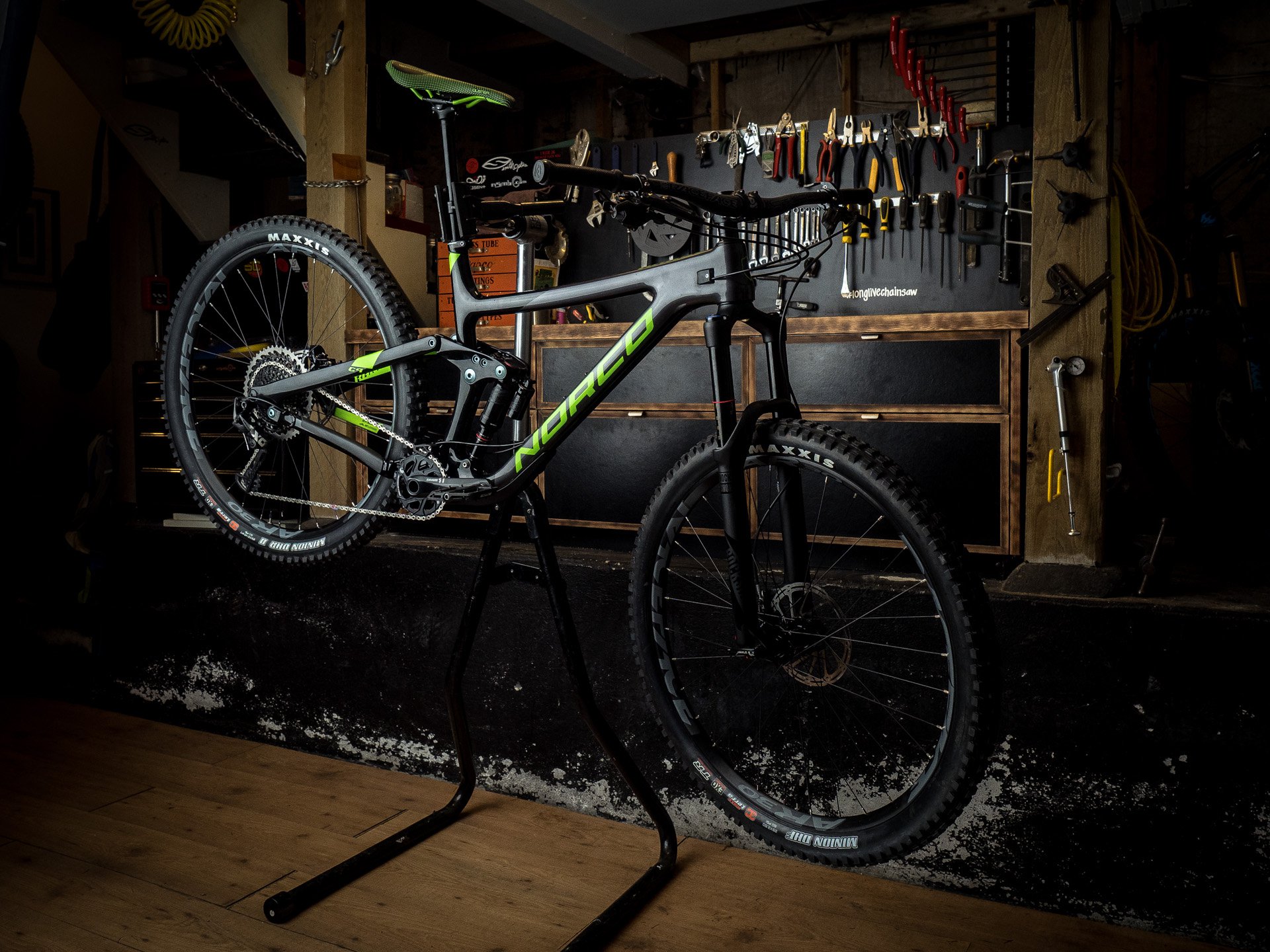 The Range cuts a sleek and elegant silhouette. It has the nicest lines of any Norco I've ridden.

Norco went deep on tweener wheels early on, but don't call them 27.5. The Coquitlam B.C. company has christened them Killer Bs - as in 650. The bikes have been well-received and successful so it's easy to see why product managers were in no hurry to jump into the long travel 29er fray. And this is a case when skipping the opening act proved strategic. Before Boost rear axles, wagon wheelers over 130mm of travel tended to have stays longer than your arm, compromising cornering and agility in tight spots and they were often tall, steep and tippy. Adding Boost to the front has also improved wheel strength and rigidity thanks to better spoke triangulation. Beyond that, the mysteries of fork offsets and geo numbers for these bikes have been cracked, edging some of us who had sworn off the largest wheel size toward the dark side. And this bike further cements my affection 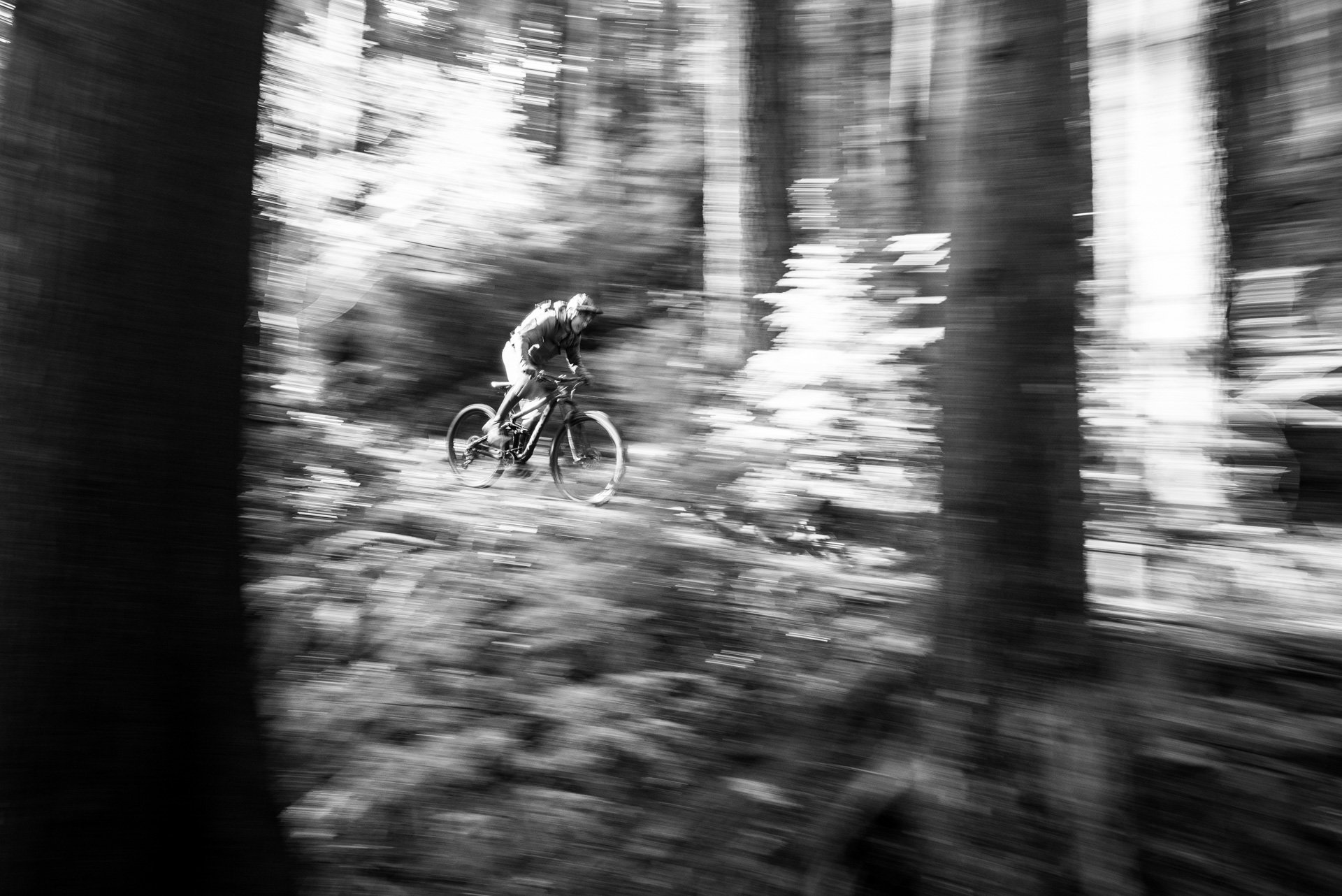 A rare day without precip and an opportunity to get the Range up to speed - one of the bike's many happy places.

Many of the Range 9.2's strengths relate to the stiff frame and fork coupled with sturdy wheels and burly tires. In my first impressions piece, I noted how eagerly the Range gorged on curvy bits of trail. I have continued to be able to poach inside lines on even flat and loose corners. And the bike holds lines tenaciously, likely thanks to the robust stature and the well-balanced suspension, but the Maxxis rubber didn't hurt either.

The maneuverability of the platform in tight spots was less expected. Despite the Range's relative heft, it felt unexpectedly agile. On our second shoot with the bike we chose some janky moves and I could easily coerce the bike from side to side and place the wheels precisely. It won't compete with some shorter travel and lighter bikes in this regard but it lines up very well within its category. It's also willing to get up on the rear wheel when the opportunity presents, an attribute that was missing on the Shremedy we tested last year. 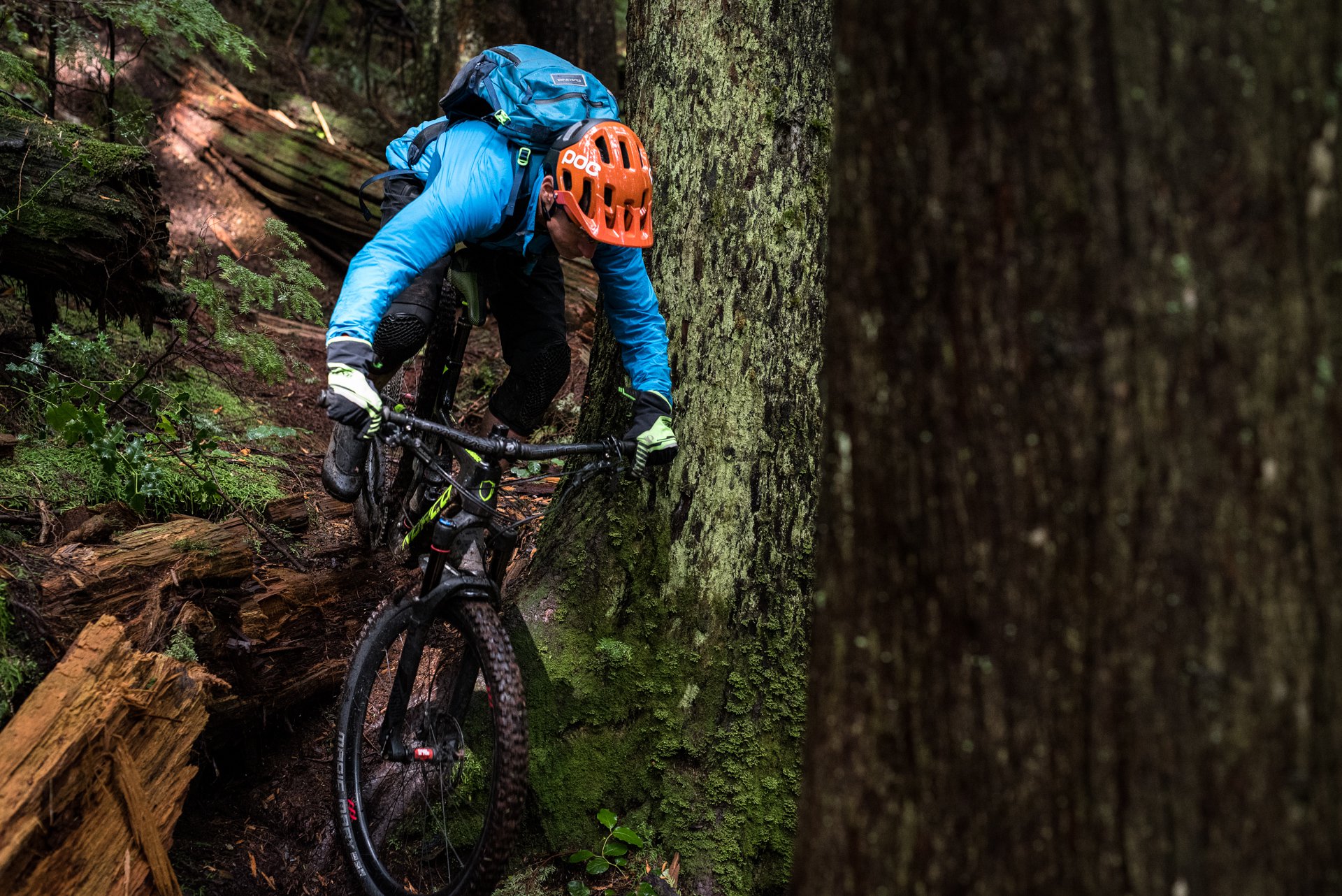 The Range was easy to handle in tight spots and surprisingly maneuverable.

I would have liked the opportunity to ride the Range in the Whistler Bike Park. It feels more suited to the rigors of Goats' Gully, Dirt Merchant and Schleyer than other 29ers I've ridden. It is poised at speed and the stiff frame never fails to accurately go where I point it. That said I've ridden other platforms that more readily deal with square edged hits and large impacts in general. I felt like the fork found its sweet spot after I dropped a couple of pounds from my initial settings but the rear never got to next level. It was absolutely competent but it never amazed me in the truly rough stuff. There was a harshness that I couldn't tune out in these edge case conditions. On all but the aforementioned roughest sections, the suspension performed effectively.

One place where the Range surprised me was in the air. I rarely get very far off the ground but I found new confidence on the 9.2 to the point where I occasionally didn't dead sailor. I even got myself off some things I usually ride around (hanging my head in shame) a nice change. 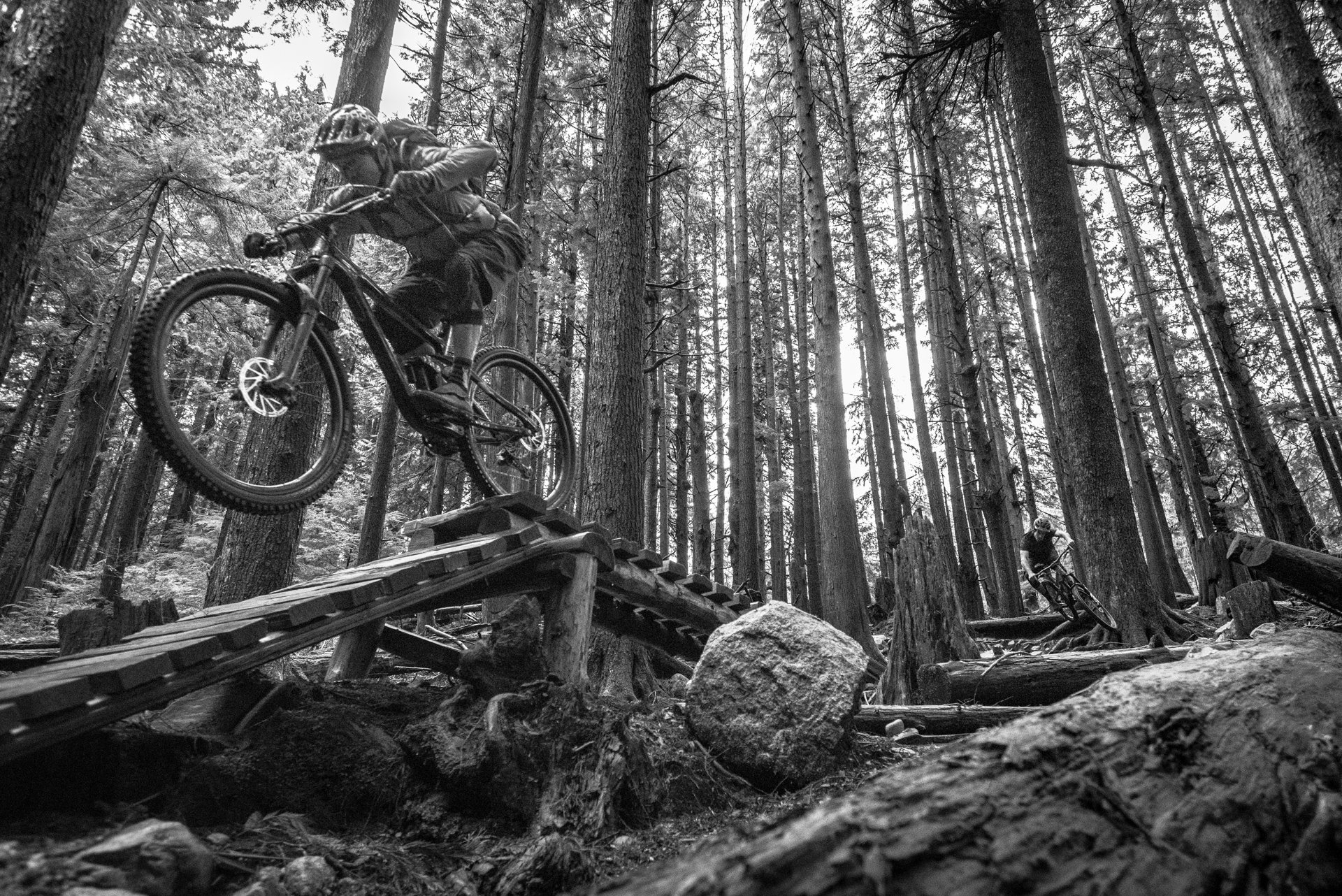 This image may not be a great example, but the Range gave me out-sized confidence in the air. Stephen Matthews adds some much needed style to the scene.

The Range rewards an aggressive nose-forward riding posture. The more aggressively I rode, the better the Norco responded. Monster trucking the front end through obstacles inevitably got me to the other side. The Lyrik, unsurprisingly, felt like a Pike after six months in the gym, tracking accurately in all conditions. It was less eager to get into the meat of the travel than the Pike and the more supportive stance suits the bike well, saving the remainder of the damping for more serious impacts while still softening lower frequency hits adequately. 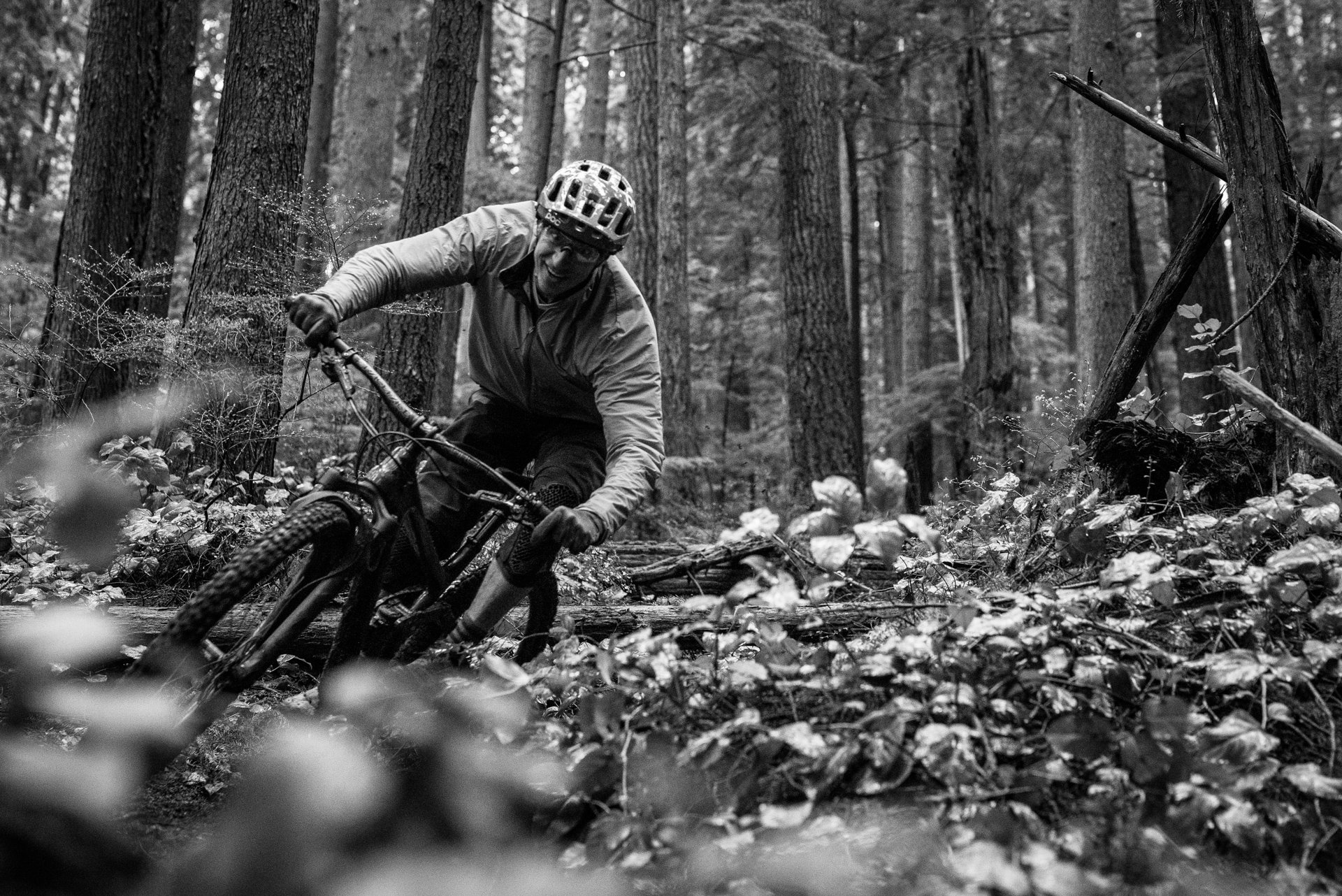 I loved the way the Range carved corners. Excellent grip, stiffness and suspension balance kept me on inside lines and moving (realatvely) quickly in semi-circles.

The rest of the component array left me little to gripe about. The Eagle XO 1 drivetrain was impeccable and had me wondering how I lived without a 50t ring before this. Scoff at my feeble powerband if you must, but I've heard the same from riders who are much stronger. Everything with the cockpit was just right and the Raceface dropper performed without a single hiccup, the long, light action lever set a new standard in my experience. 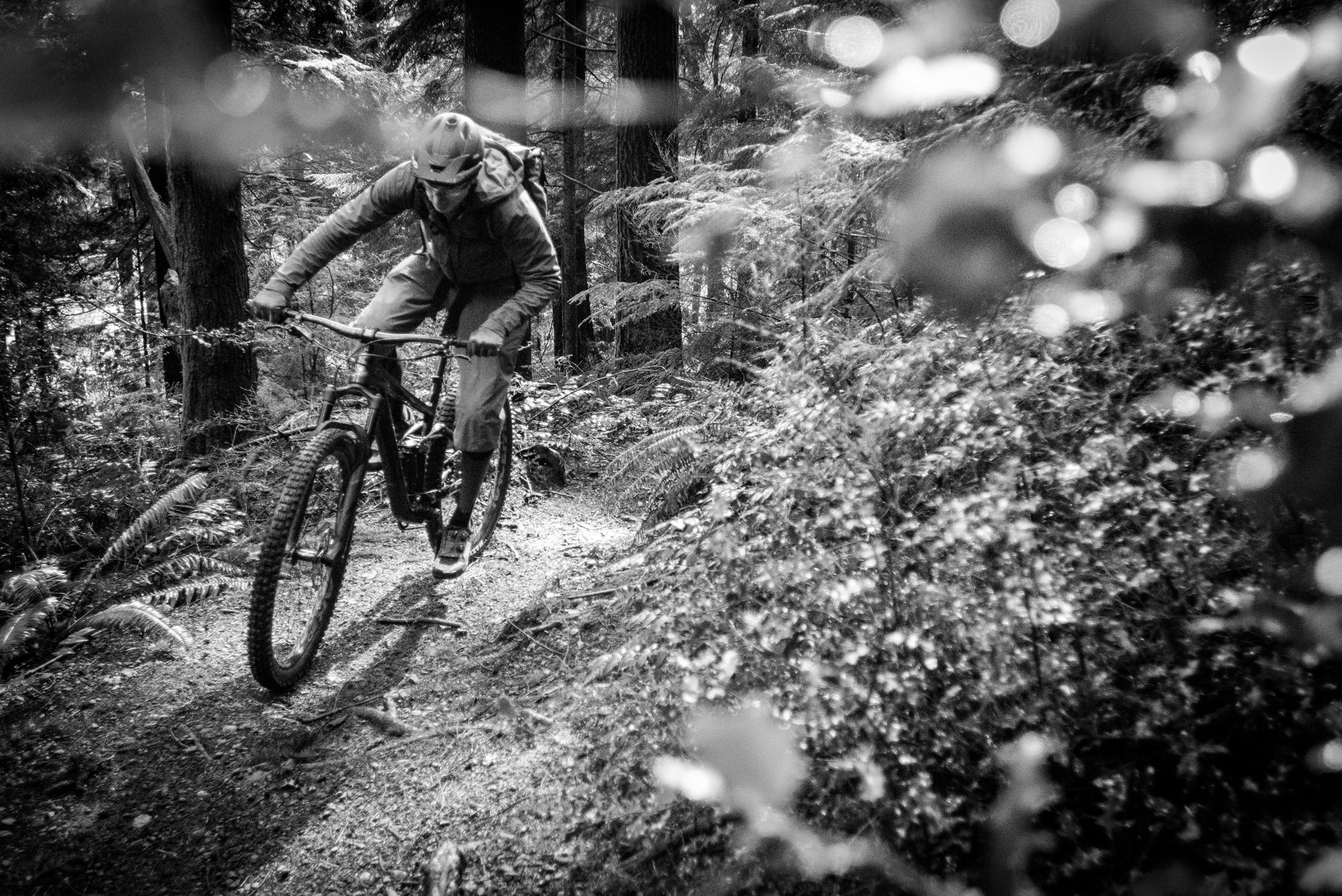 The Range 29 transfers power efficiently and I never had any reason to complain about the way it climbed. Minimal bob when the shock was open and virtually none in the other two compression settings.

The one exception in an otherwise flawless selection of parts was the SRAM Guide RS brakes. They were really good for the first few weeks and then power began to drop. At first I thought the pads were some short-wearing OE compound. Guide brake performance, in my experience, drops off quickly once the pads get within 20% of their original thickness. That wasn't it. The pads had ample life left and the bleed felt solid front and rear, so I cleaned the rotors and filed down the pads in case they had become contaminated. Unfortunately they were no better afterward and the lever force needed to maximize braking force made feathering impossible near the limit. After five or six excellent sets of SRAM brakes in succession, I got a set with issues. They weren't unusable but braking force was perhaps 75% of the original performance. An insufficient proportion for the trails I normally ride. 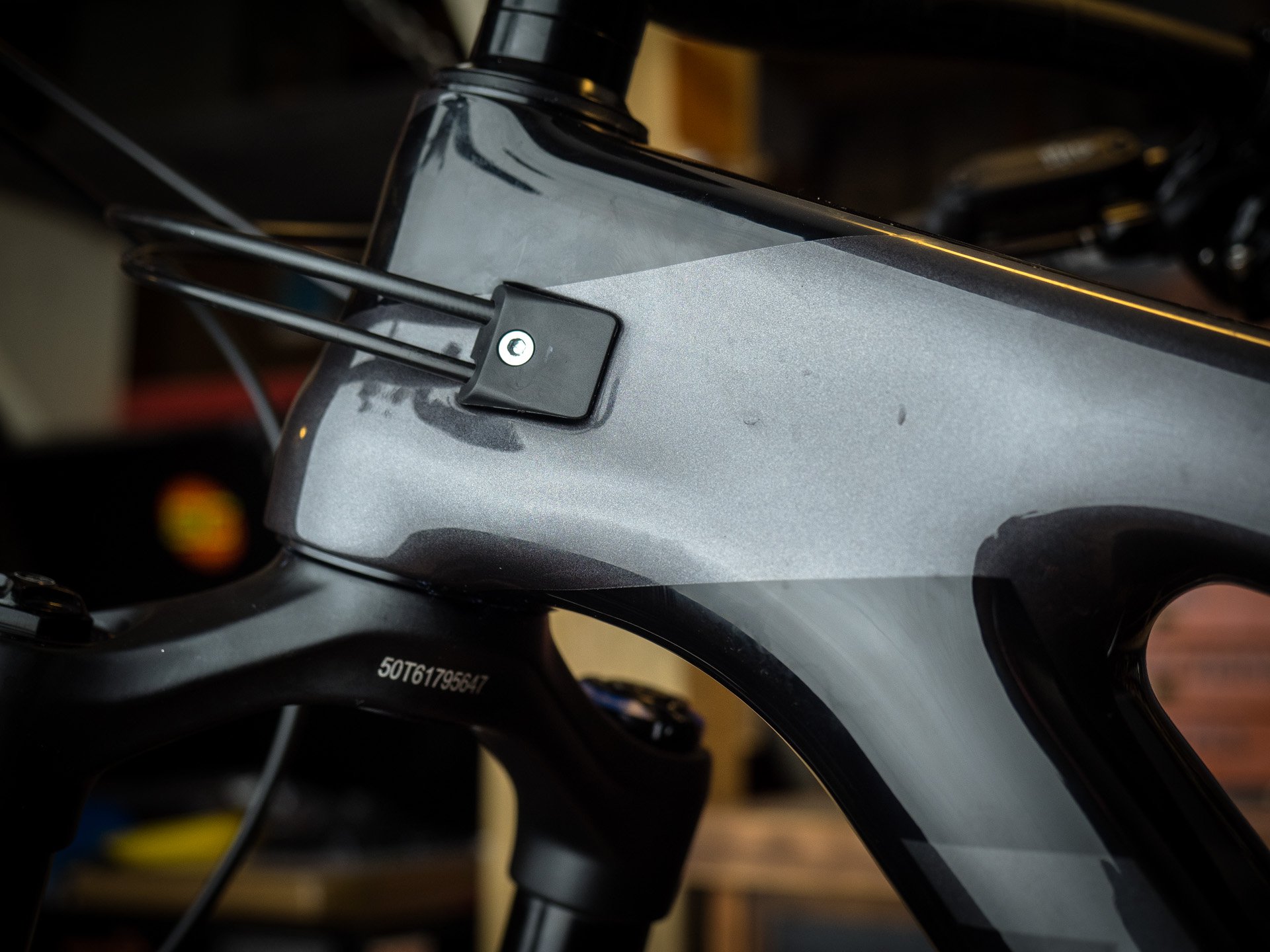 The original high-gloss finish has suffered after many muddy winter rides.

One of the elements that impressed me most about the original presentation of the bike was the high gloss finish of the frame. Unfortunately, the sheen wasn't as durable as I expected. The first sign of this was under the downtube just behind the headset. I generally toss bikes in the back of my truck to get them to the trailhead and after just a few rides I noticed that the paint was badly worn, right through the first layers of paint, despite the protection of my Raceface truck pad. Normally I try to treat test bikes a little worse than your average consumer but the wear under the down tube galled me so much I had to apply clear plastic protection on that spot. The rest of the frame was also showing signs of wear after our unusually nasty winter. There are fine scratches and in most areas, the original luster has dulled more than expected. I hoped for more from a bike that retails for $7500 Canadian. 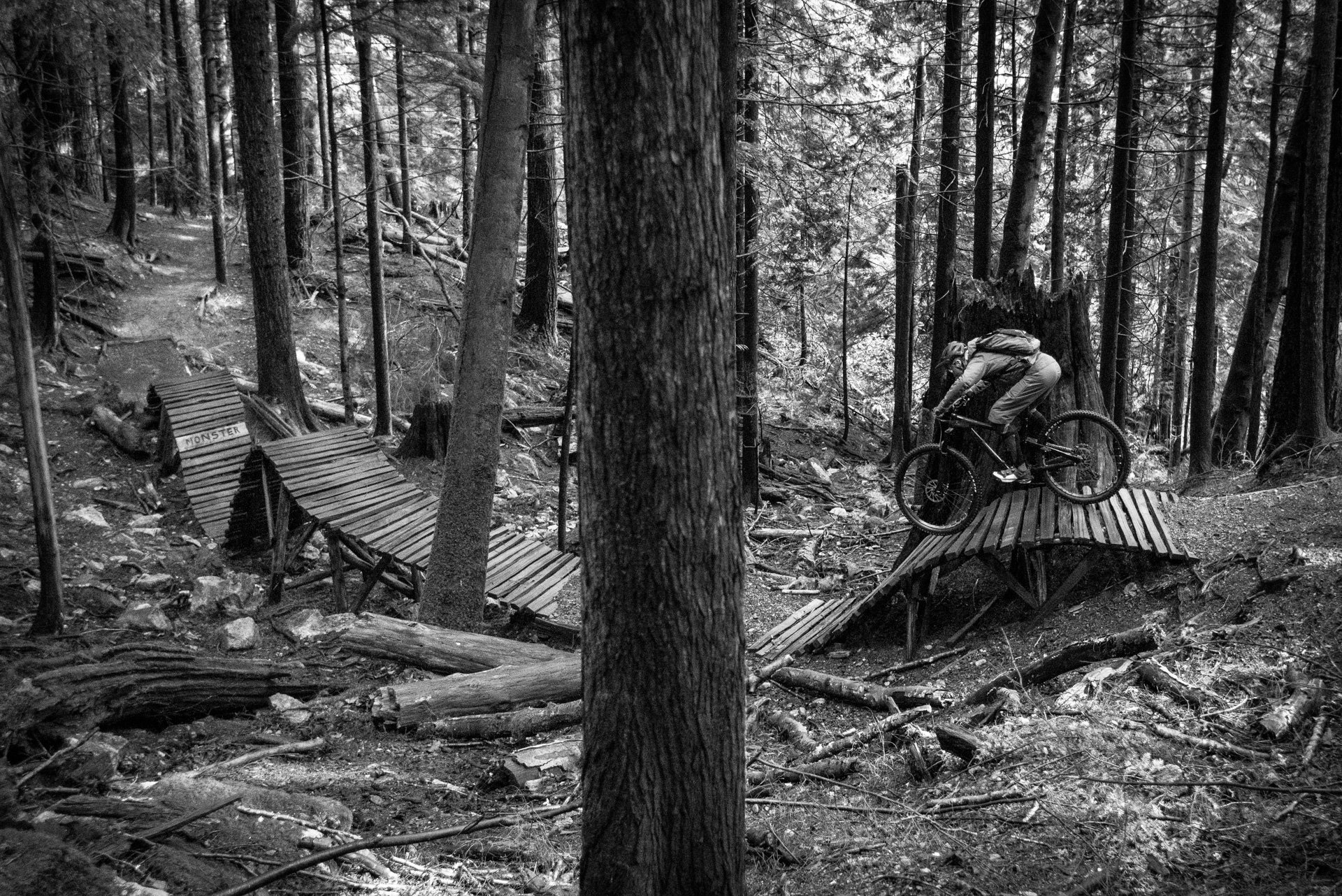 Some of the frame details also left me wanting more. The ports for the internal routing, while effective, have a less refined aesthetic than other frames in this price range. The other hardware on the frame leaves a better impression but much of it too is below the standard of other brands this bike competes with.

The 2017 Range 9.2 Carbon is a highly capable machine. It excels in a variety of conditions thanks to an excellent parts spec, a solid and stiff frame and dialed geometry. At 32 lbs (14.54 kg) it's unlikely to appeal to the gram counters, but I never noticed this extra heft, aside from being impressed by precise handling. The ride, which is incredibly quiet, speaks to quality construction and makes the bike a pleasure to ride. The damn the torpedoes layout and parts choices make the bike an excellent choice for heavier or rowdier riders, particularly those who like to ride bike park when they aren't legging the willing climber to the trailhead.

Maybe the Range will serve up the motivation you need to get out on the trails more - unless you'd rather just sign up for a race.

For more on the spec and details of the Norco Range 29 9.2 check my first impressions here.

And the bike can be found on Norco's site here...

Well written and informative article with fantastic photos. Thanks!