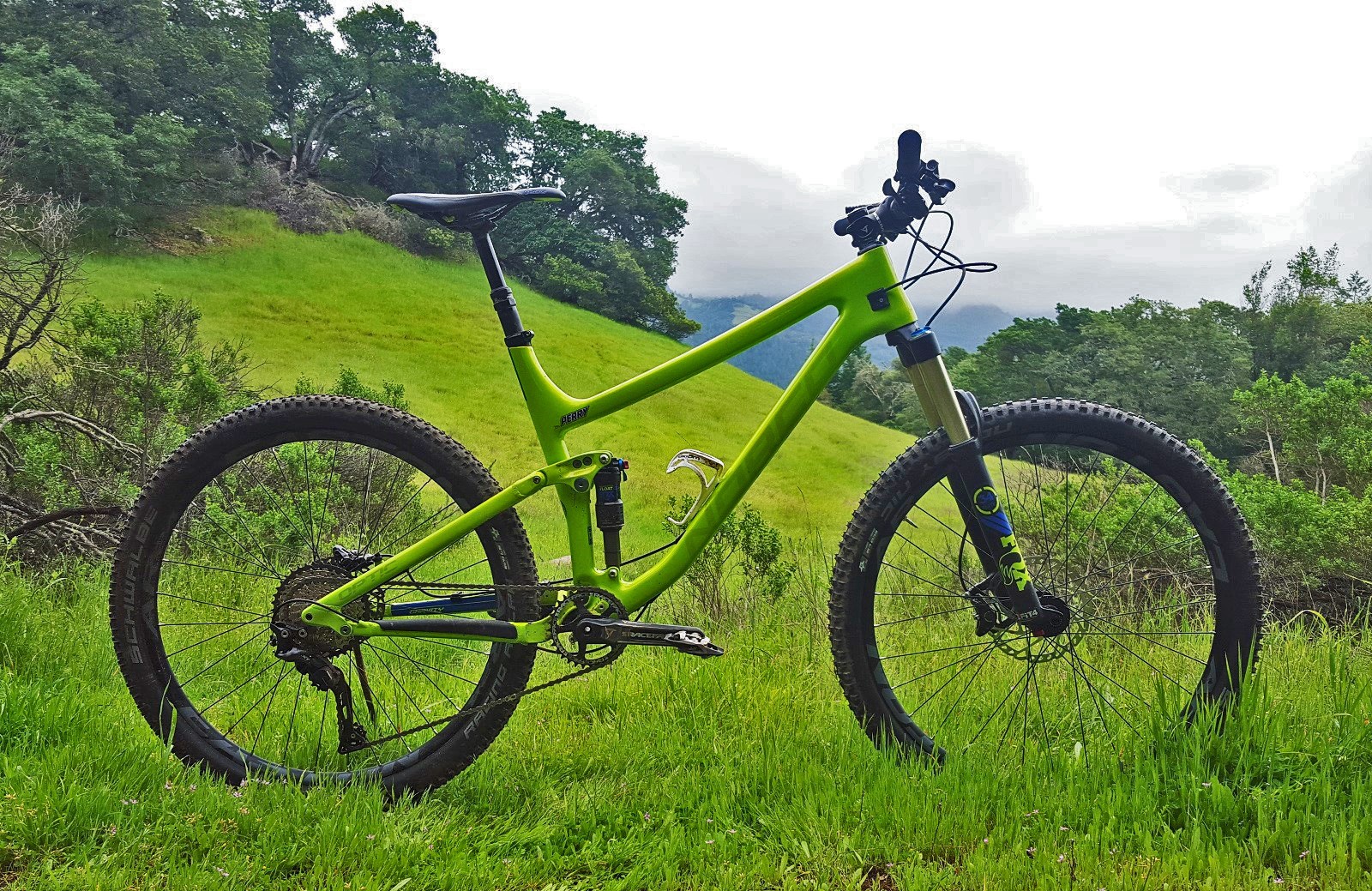 Preface. As a dabbler in the realm of mountain bike journalism (I have a non-industry day job), I’m a bit of an outsider looking in, and was curious about how these things worked. The cynic in me figured the process of flying scribes to idyllic riding zones, wining, dining et al, might not result in untainted, objective journalism, but damn, it sounded like fun. Needless to say, when this opportunity arose, I couldn’t say no (thanks, Cam!). Let’s see what this gig is all about, and attempt to justify my presence.

So, what’s the deal? Norco gathered an intimate group of journos in Santa Rosa, CA – home of Charles Shulz, Russian River Brewing (more on this later), and Annadel State Park – to witness the introduction of a completely new platform in their lineup: the Optic. Curating this event was a gaggle of top tier Norco staff – sales / marketing / design / engineering: all facets covered. Also in attendance was some serious on bike talent: trials guru Ryan Leech, and husband/wife super duo Byrn Atkinson and Jill Kintner – all super nice people, I might add. Anyways, I ramble on. We’re here to check out the new bike and generate impressions within a day and a half of riding; let’s get on it!

My plane parked beside Ed Force One at YVR waiting for fog to dissipate in San Francisco. Flying a 747 to gigs? So Metal.

So what about the bike? Right. The Optic is a new trail bike platform that slots in below the Sight in terms of travel hierarchy. But it’s not just one bike – it’s two! There are both 650b and 29” wheel size variants, as well as aluminum and carbon front triangle iterations (rear frame bits are aluminum throughout the range). There are 3 build levels (for each wheel size) with the carbon front, and two different builds (again, both wheel size options) in the full aluminum. That’s a heap of SKU’s. The bikes I rode – The C7.2 & C9.2 have a MSRP of $6299CAD / $4699USD. The aluminum models start at $3499CAD / $2599USD, and the top tier C7.1 & C9.1 goes for $9699CAD / $7199USD. Here’s a bunch of numbers to get started: 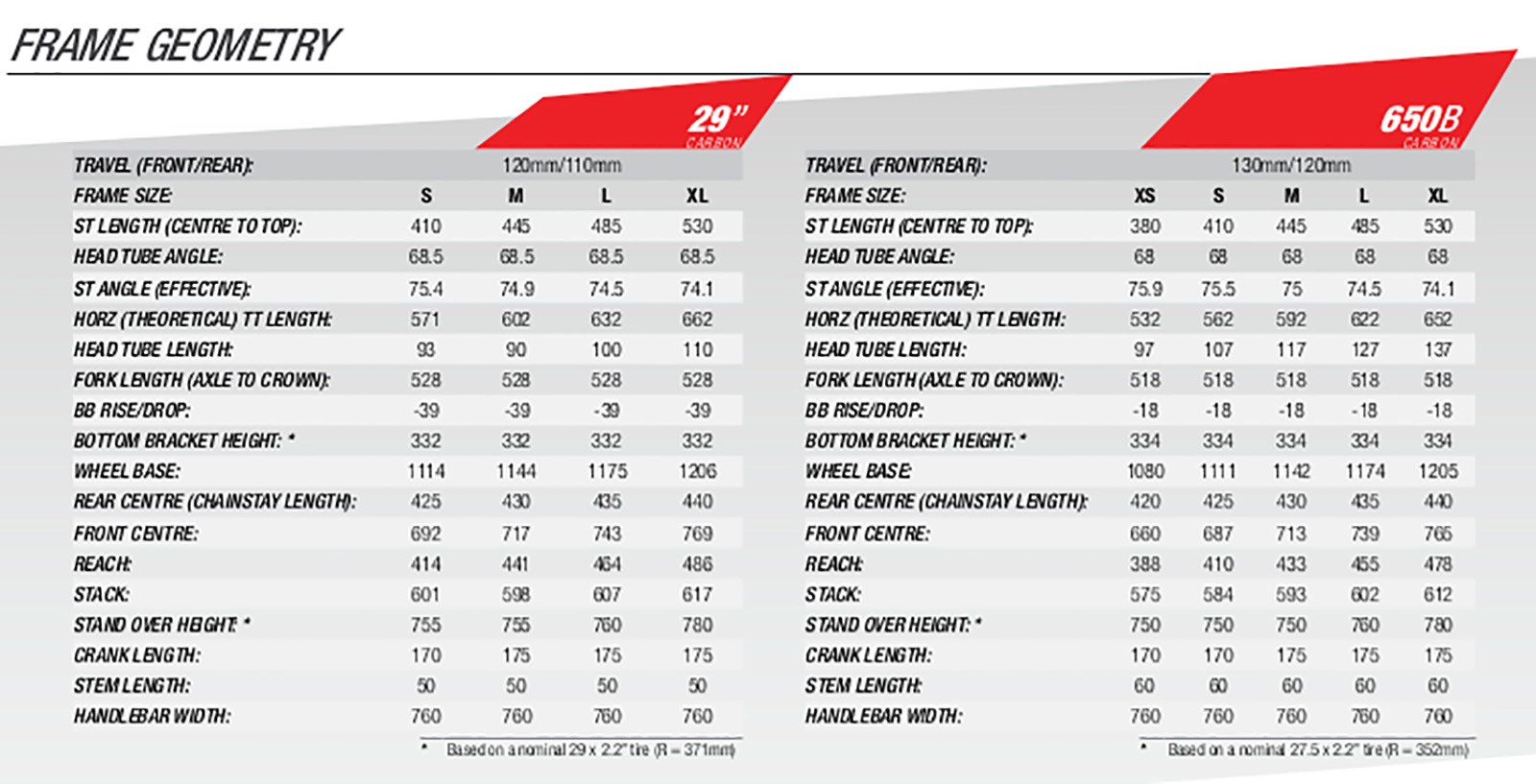 Note the variations in geometry between the wheel sizes. They’re certainly not swapping wheelsets on a common frame. Travel is tweaked as well: the wagon wheeler gets 10mm less on both ends than the 650 (120mm front / 110mm rear vs 130mm / 120mm). Interesting.

On with the show. So we given not one, but two bikes each to ride. I spent our first evening ride on the 650, then alternated between the two wheel sizes on a shorter loop for the duration of day 2. Our venue – Annadale Park – was really quite gorgeous. Different than what I typically ride, for sure – rolling hills and ripping smooth singletrack with fun multiple line options / mini hits / transfers, and a bit of rocky chunk thrown in here and there to keep things interesting. Let’s pummel you with pictures now, my fingers are getting tired. 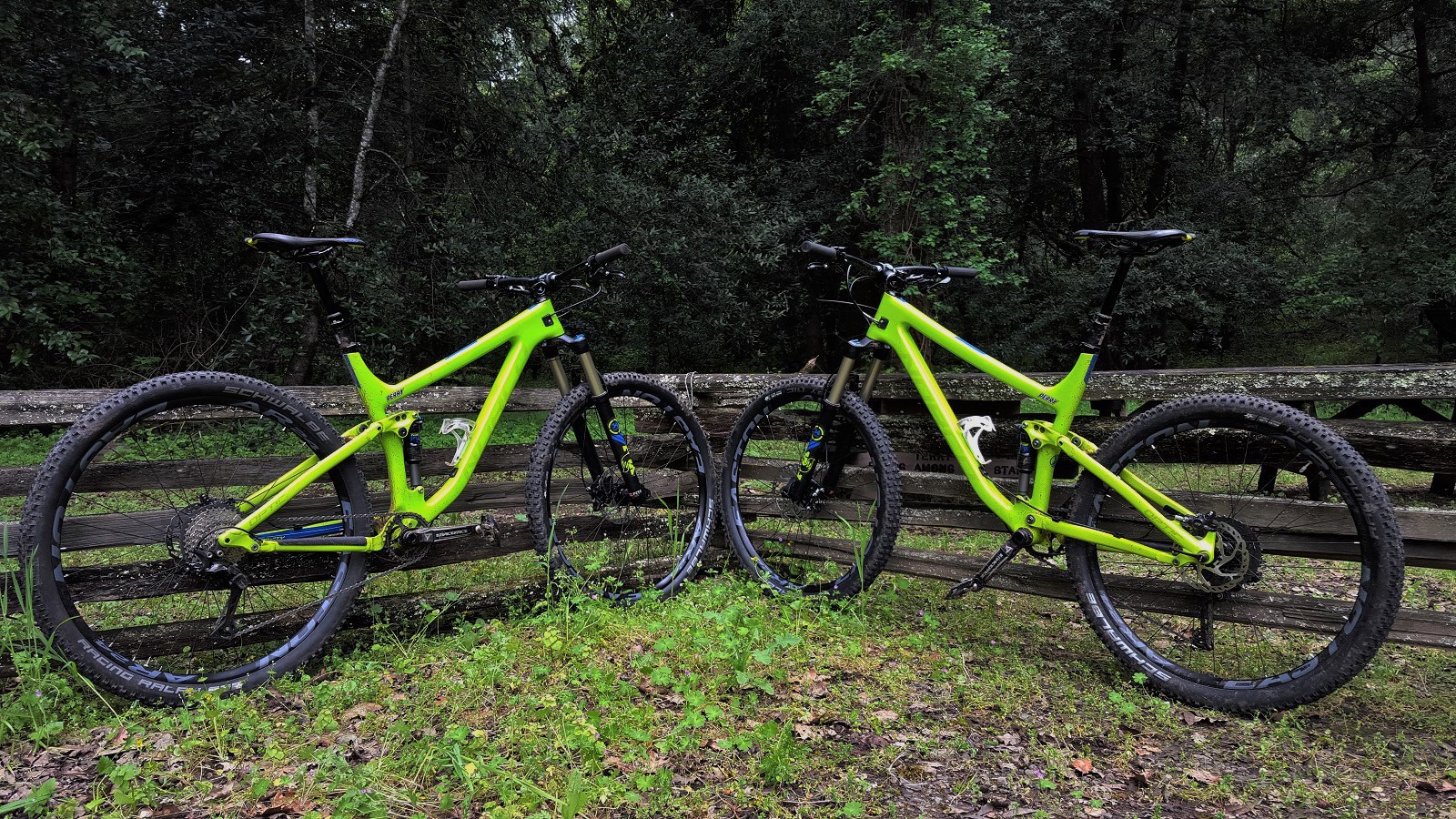 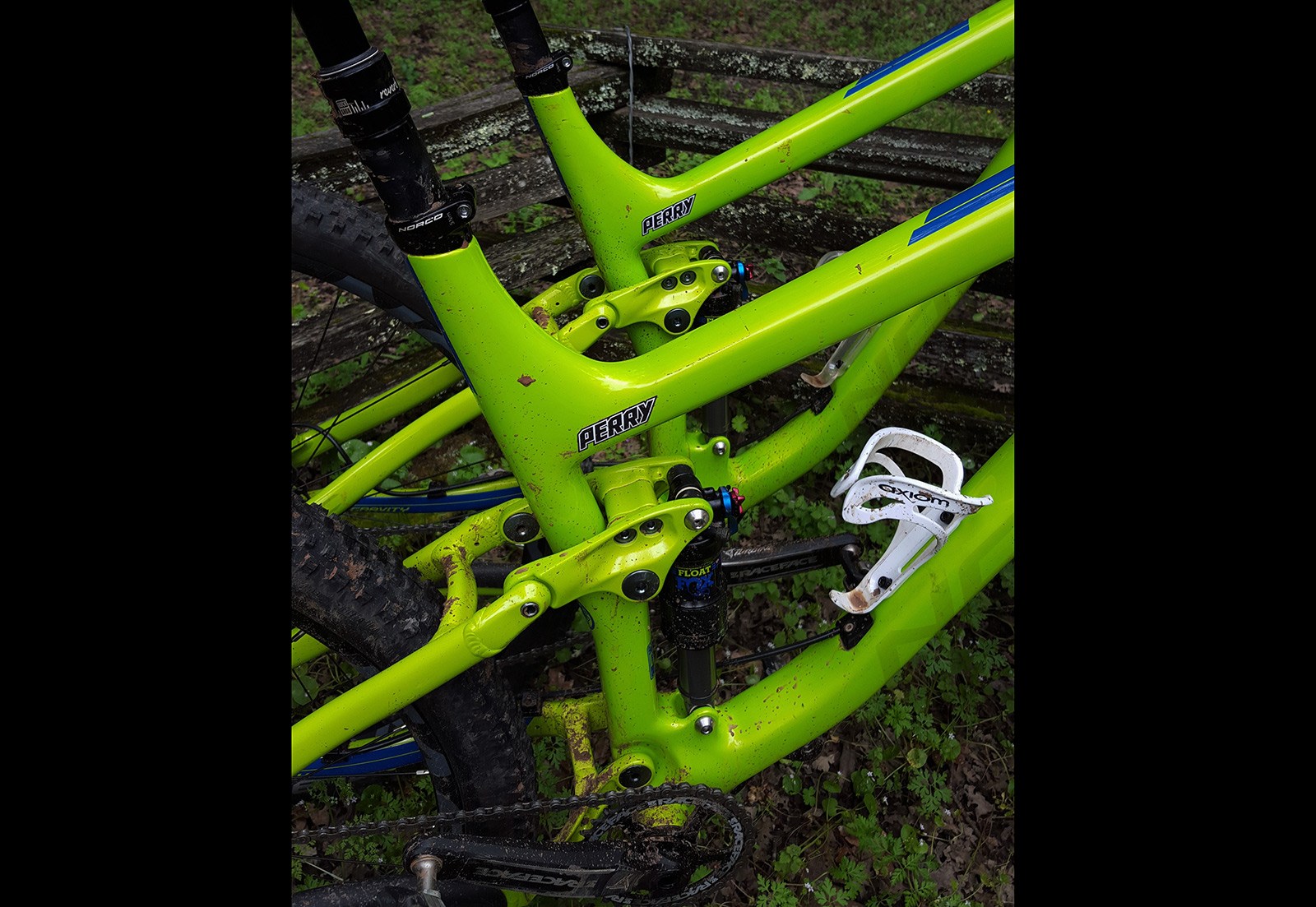 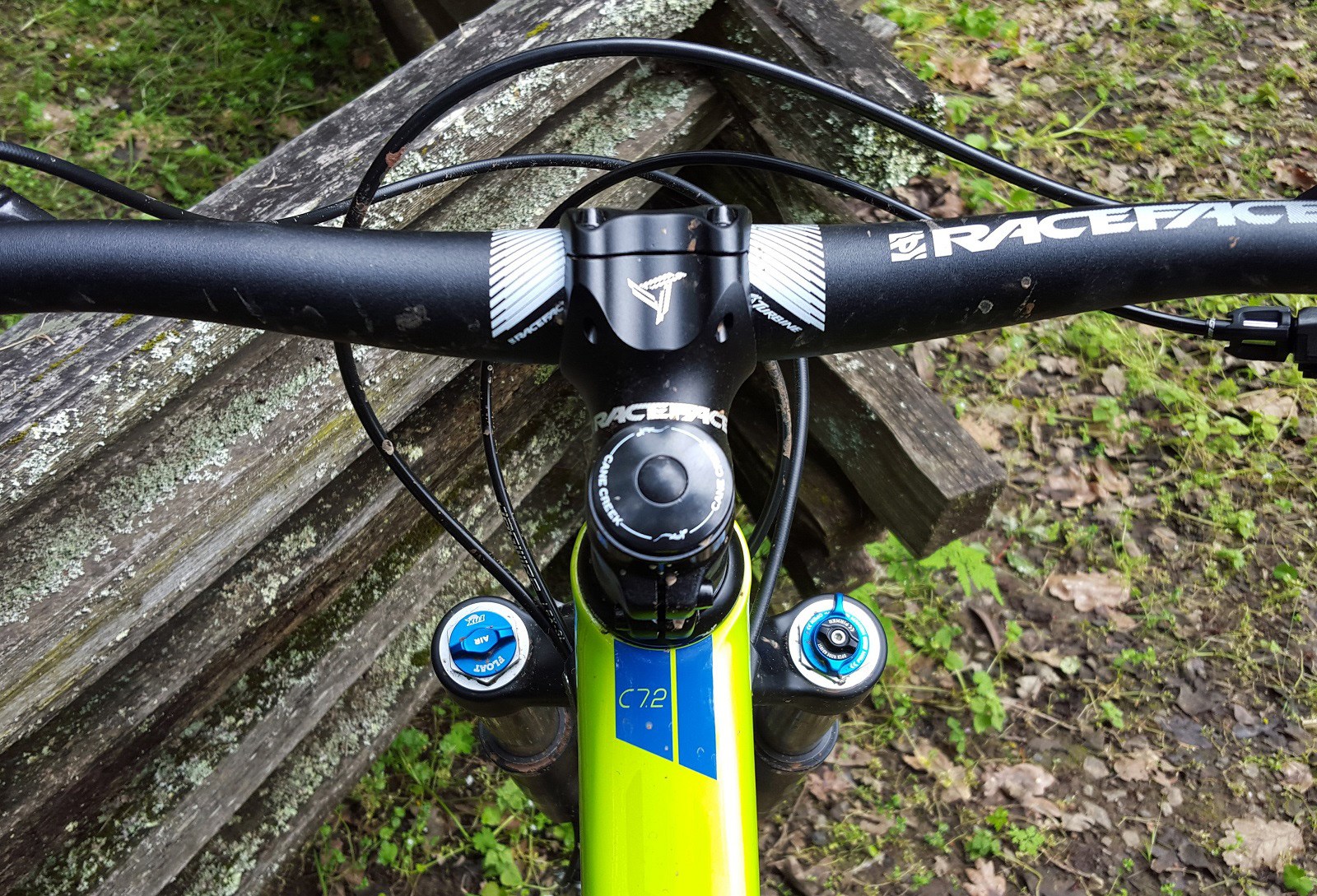 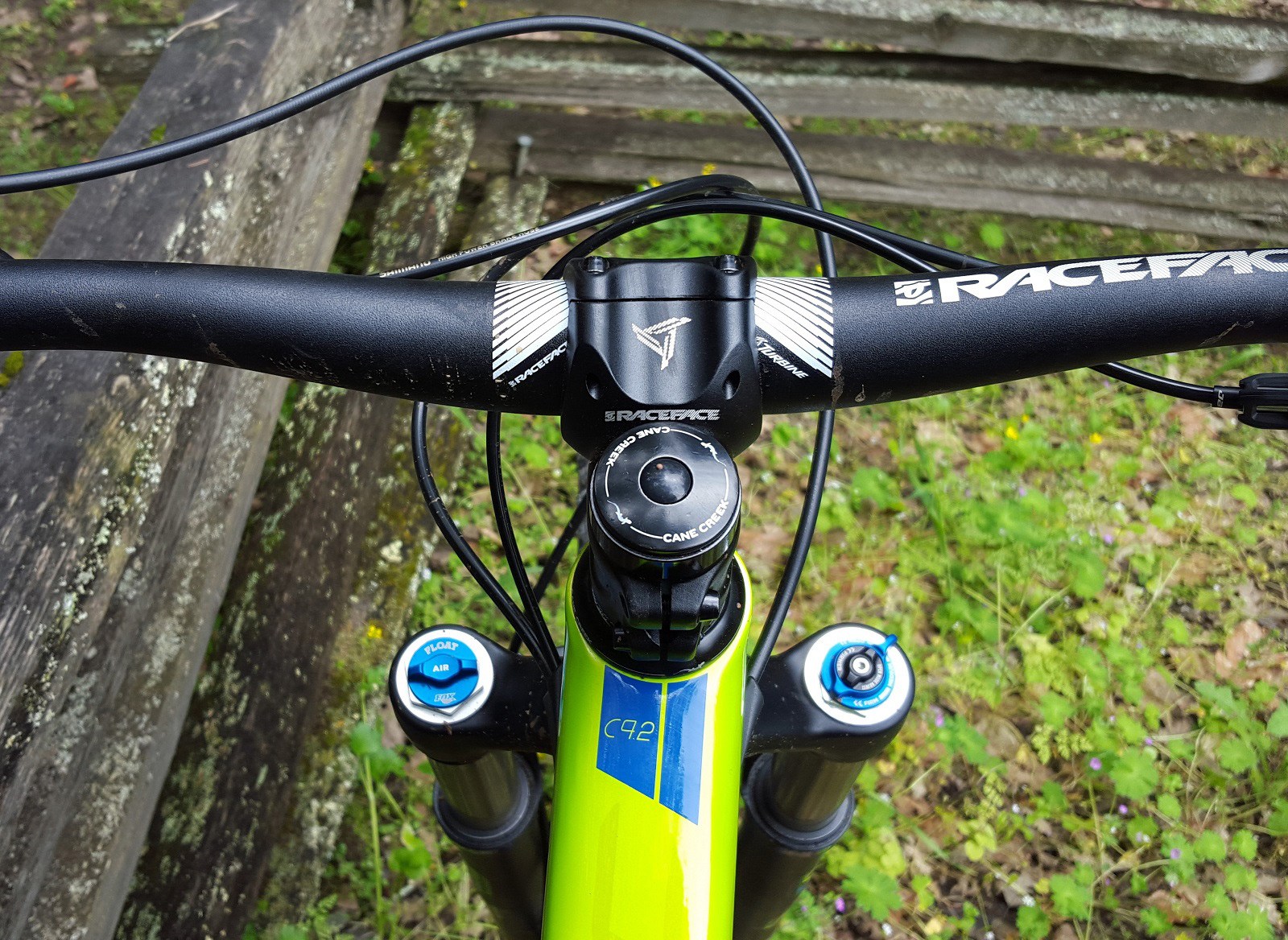 And the C9.2. Can you guess the wheelsize? Spot the other difference? The 29’er runs a 50mm stem, whereas the 650 sports a 60mm. The reach of the 29 is longer, so the effective bar reach on the two bikes is identical. All an effort to minimize the handling differences between the wheelsizes. 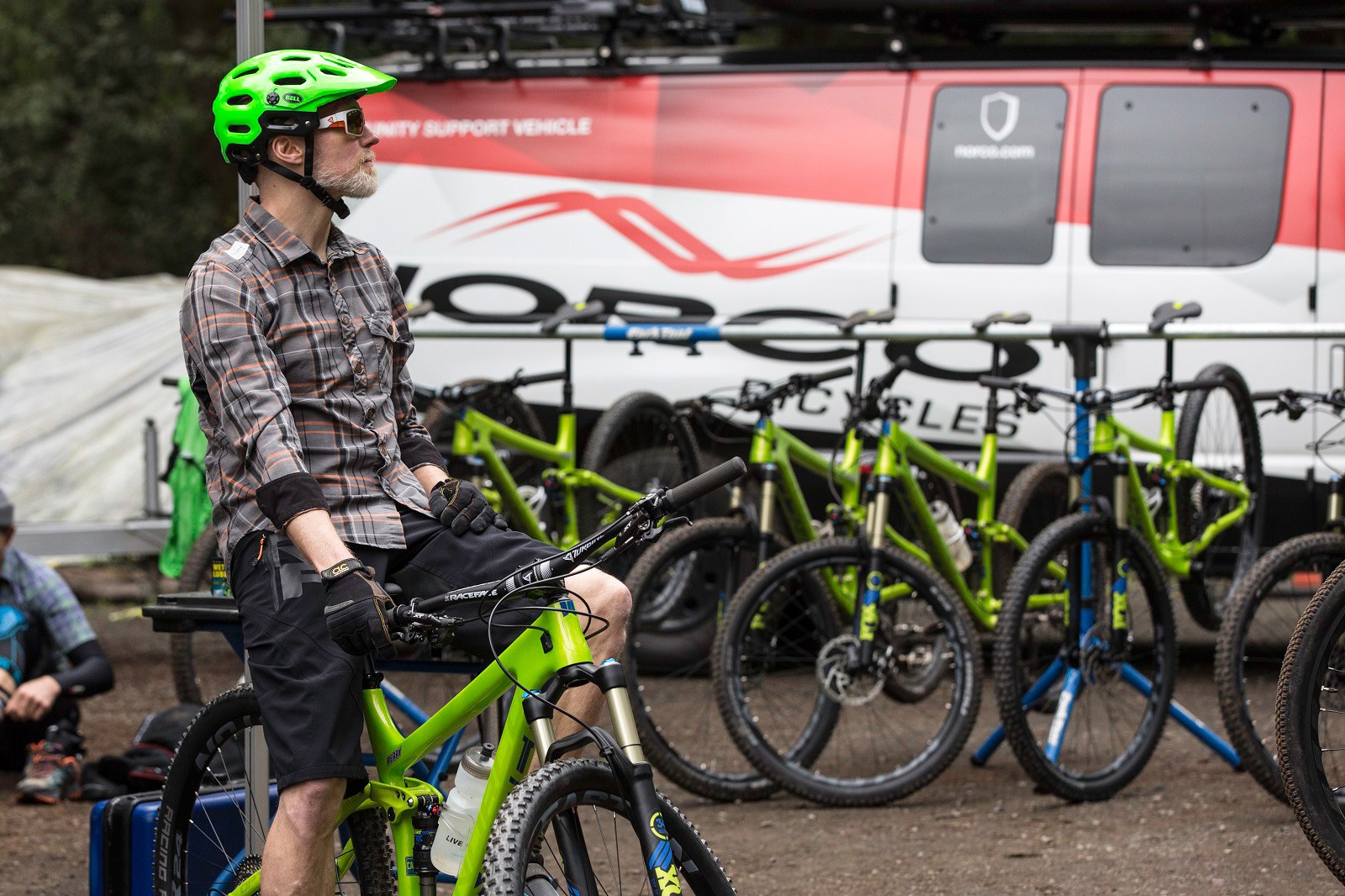 Allright, I picked one; triumphant pose. I actually put this picture up for my mom (hi, mom!). Norco had a well sorted tech camp running in the background. Photo: Long Nguyen

Intermission (off to the fridge with you). 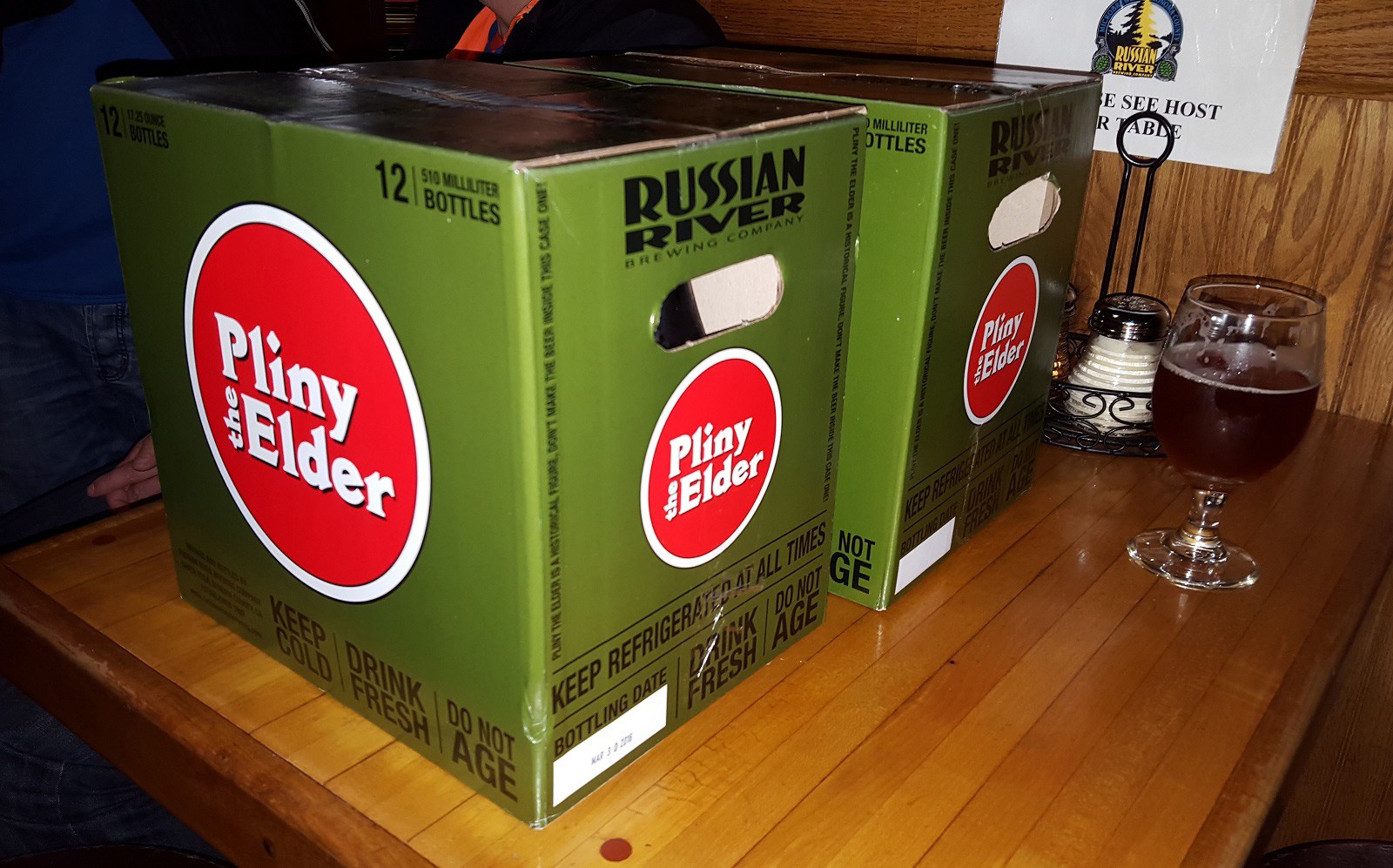 Since we were in town, a pilgrimage to Russian River had to be made. Pliny is a Grail beer; one of the highest rated in the world, and hard to get hold of (not available in Canada). I was happy to discover a bunch of the crew was similarly minded. The correlation between bike nerdism & beer nerdism is strong.

Back to bikes, damnit. 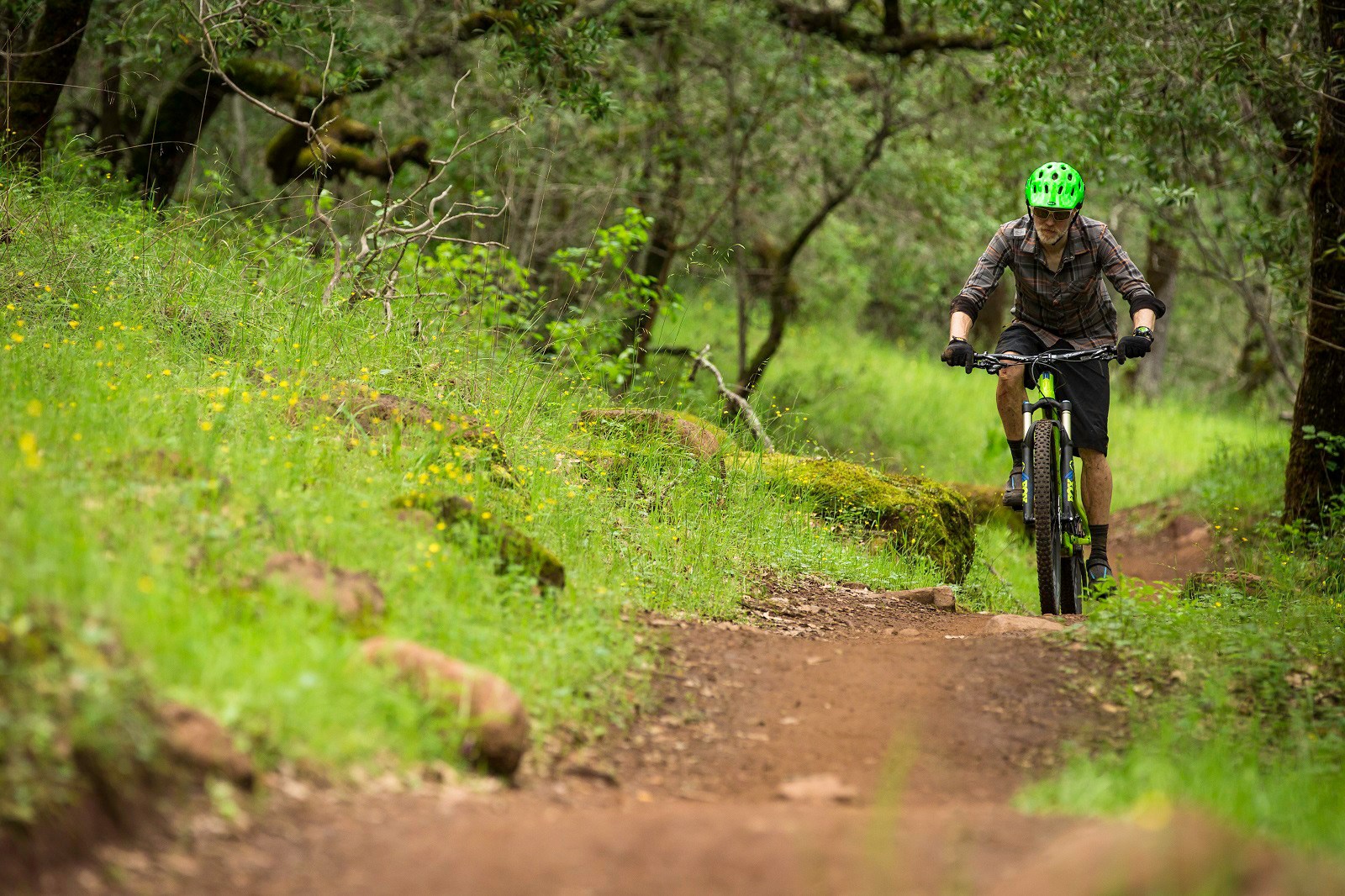 Up we go. The bikes are similar, but different on the climbs. The suspension is supple and active, with good traction through the tech rocky bits. That suppleness did translate to a bit of movement when putting down the watts, so I tended to flick the climb switch on the shock to climb mode for smoother climbing.  Also: the bigger hoops had the edge on tech climbing traction. Photo: Long Nguyen 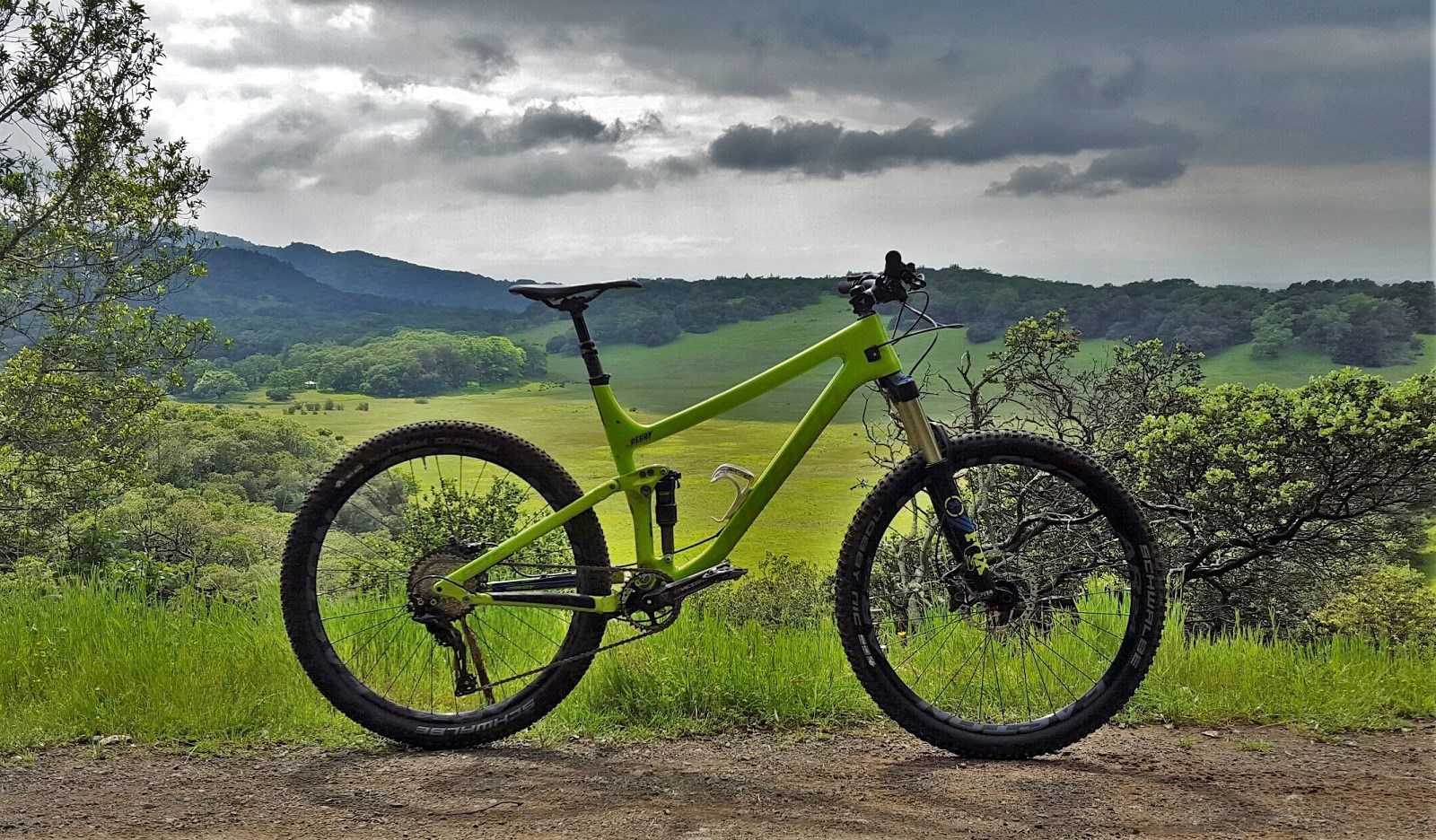 Let’s pause for a few details while we’re here.

Control bits: some nice Ruffian-esque house brand grips, solid XT brakes, and the ubiquitous Reverb Stealth. One nitpick: the remote & brake lever do not play well together – I couldn’t rotate the Reverb remote forward enough to my taste. Not the end of the worlds, but I’m obsessive about control placement. 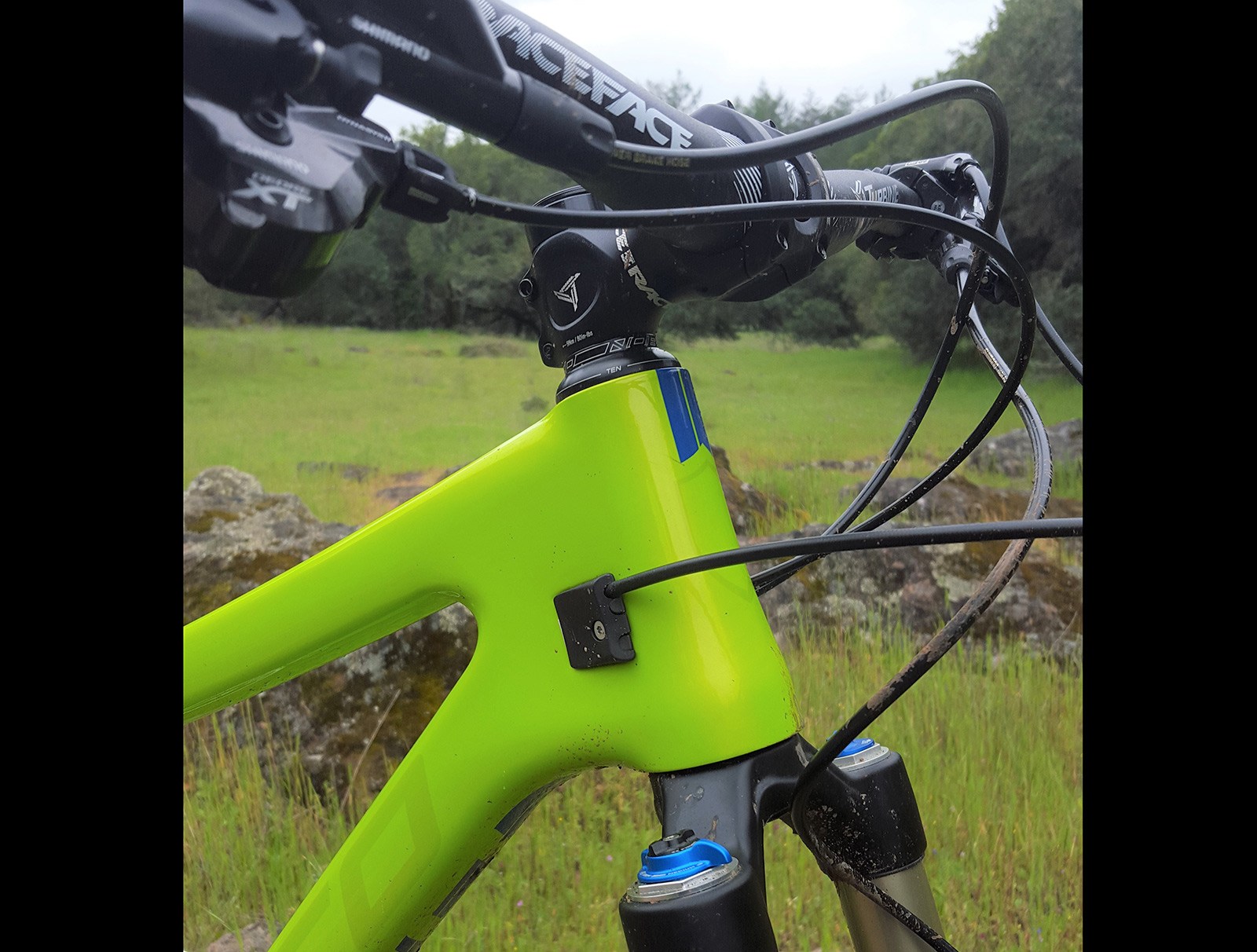 Raceface Bar & stem up top, and a Fox Float Performance fork below. I was pleasantly surprised that the new 34 offered decent levels of mid-stroke support. Note the cable port dohicky – it’s called the Gizmo, and they’re configurable for multiple cable entry options, while keeping crap out, and the cables tight. Clean. 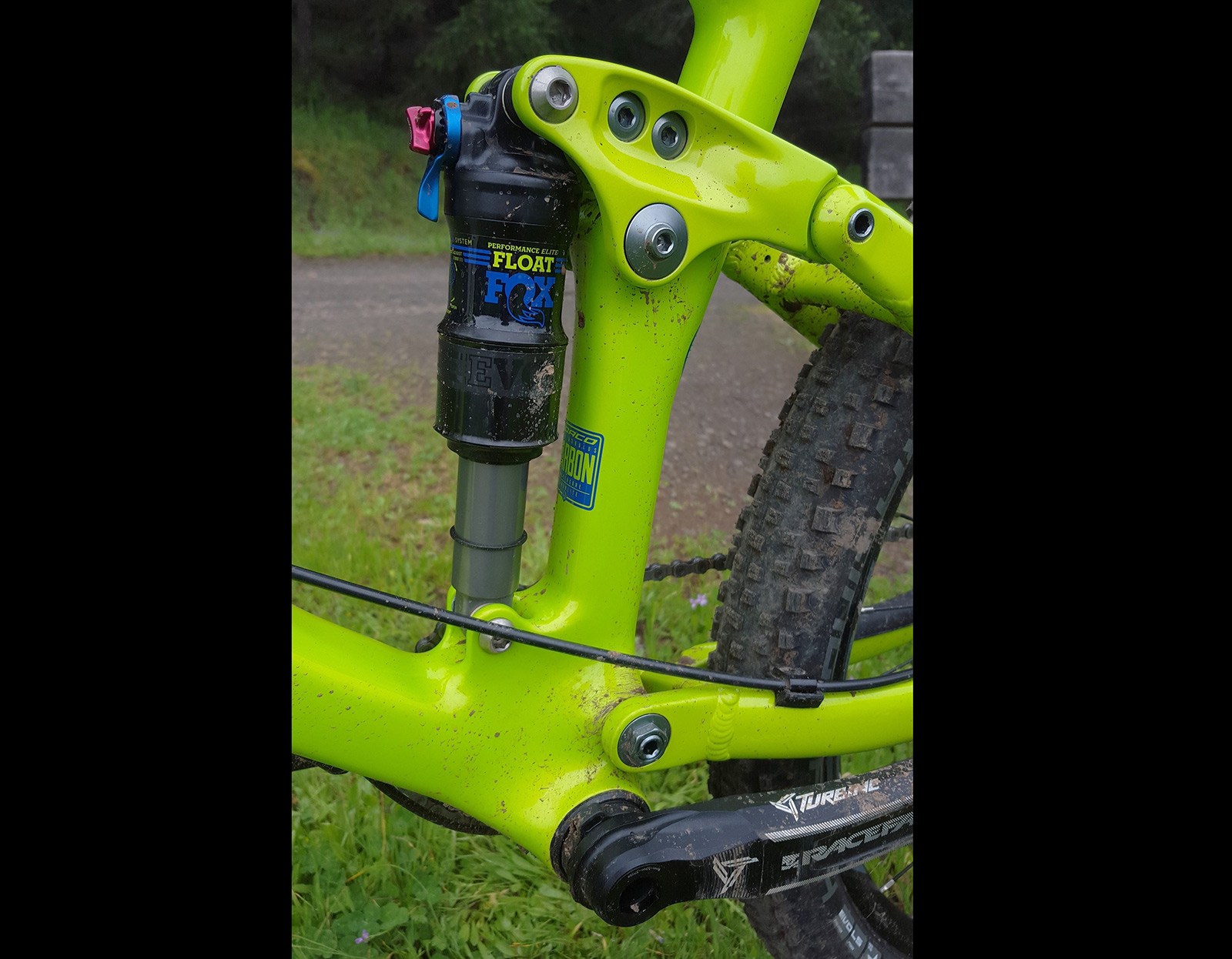 Here’s the Fox Float Performance Elite shock, with EVOL air can – it’s supple. The pivot yolk is a 3-pc bolt together affair. No threads reside within the BB shell, and a stout Raceface Turbine crankset does the leveraging duties. 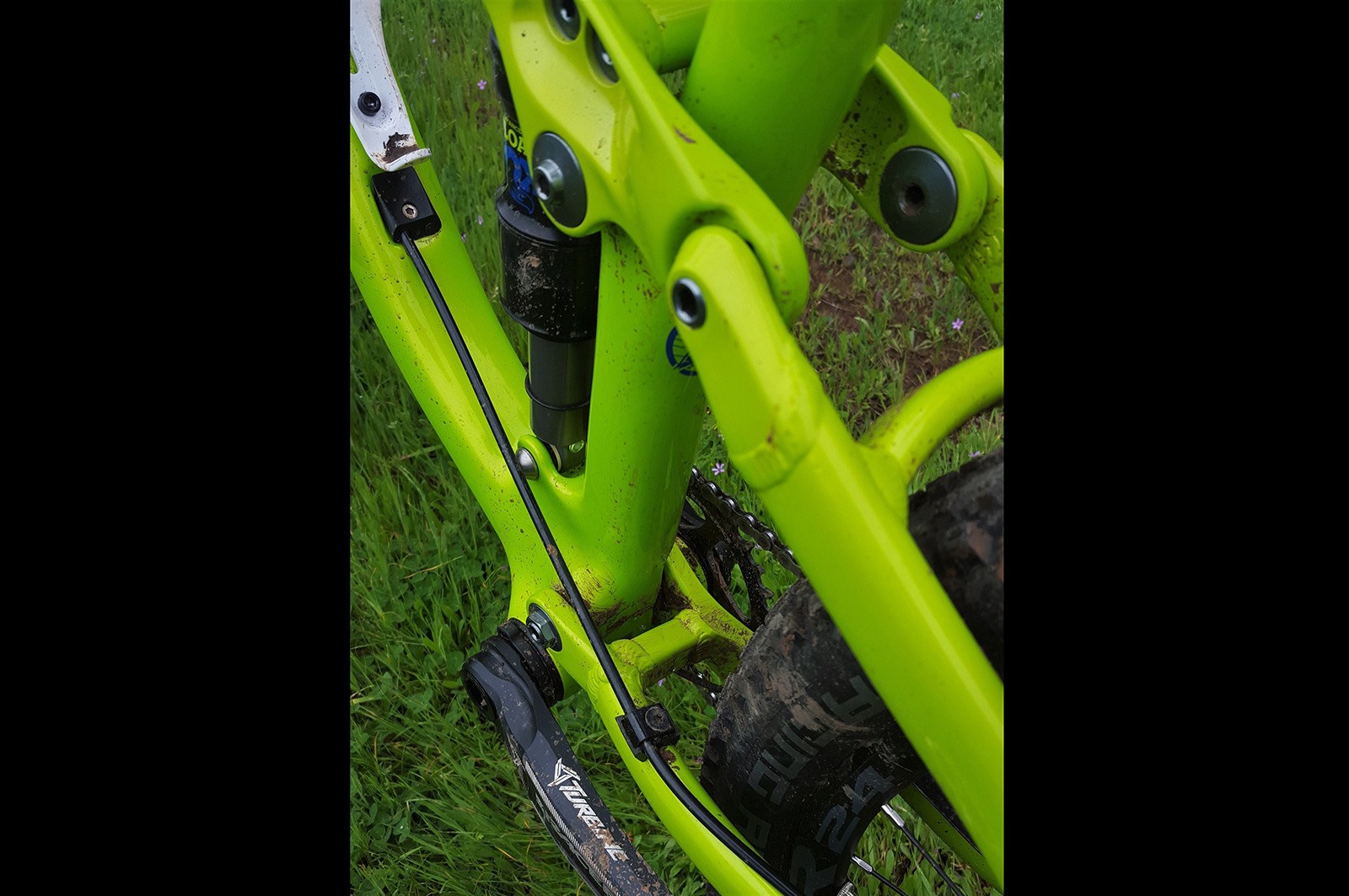 A look at the rear brake line routing- runs outboard the chainstay rather than internal, like the rear derailleur cable. This I like. Should be able to pull the brake line out (through the large frame holes when the Gizmos are pulled) without having to cut hose fittings. There’s ample clearance around the 2.25 Schwalbe Racing Ralph EVO Liteskin tire. Did I mention I do not like this tire? Tread pattern isn’t terrible, but the sidewalls are too thin for all but the smoothest trails. Even with a good bit more pressure than I typically use, I flatted twice in one day. 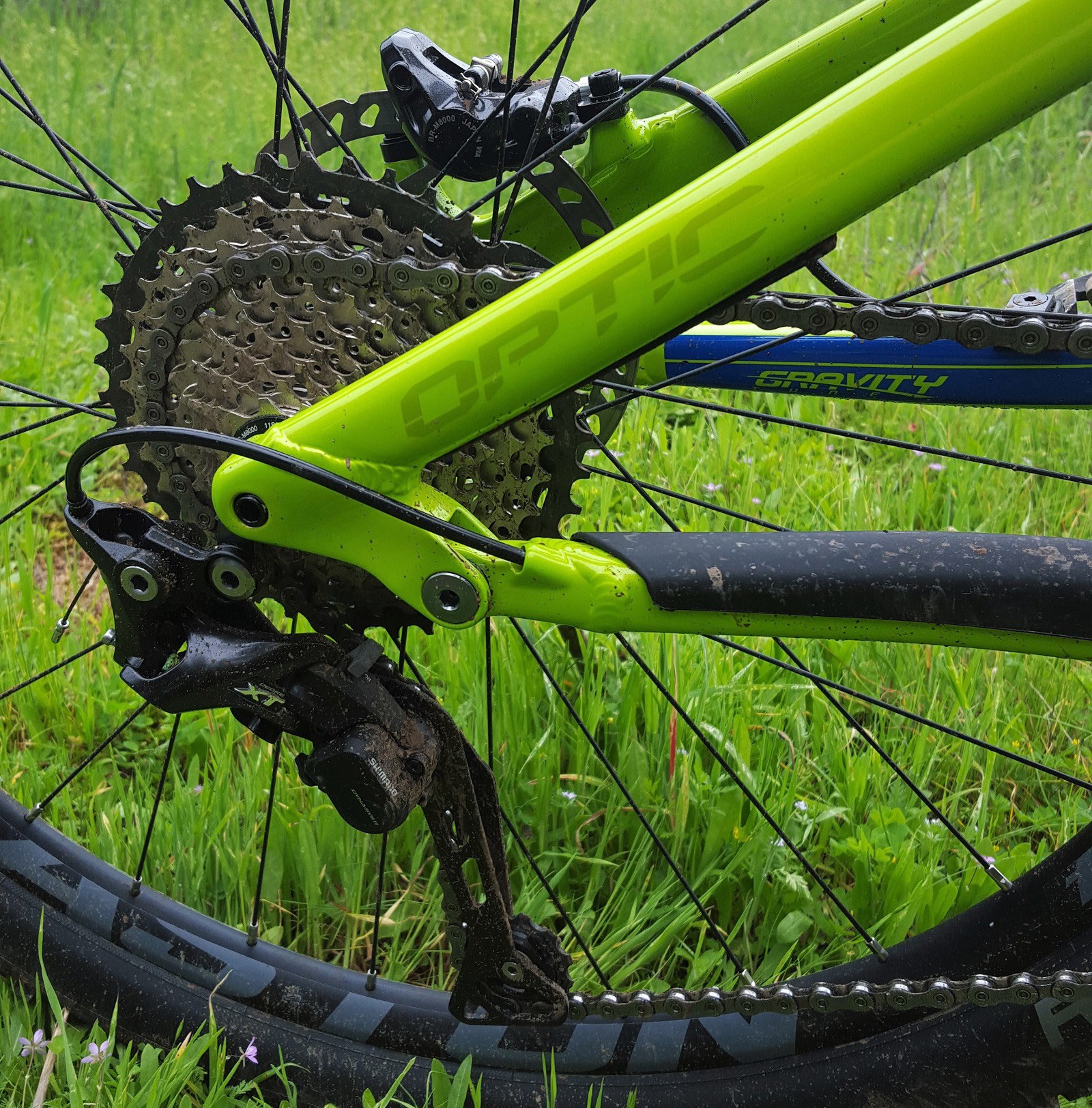 Rear dangly bits. XT 11 speed (11-42) generating a reasonable range (though a bit skewed to the low side with a 30T front ring). Note the clean internal cable routing. Wheels are comprised of Easton AR24 rims (24mm inner width) on Sram hubs and Sapim DB spokes. They seemed solid enough; didn’t pick up any dents, despite the pinch flats. 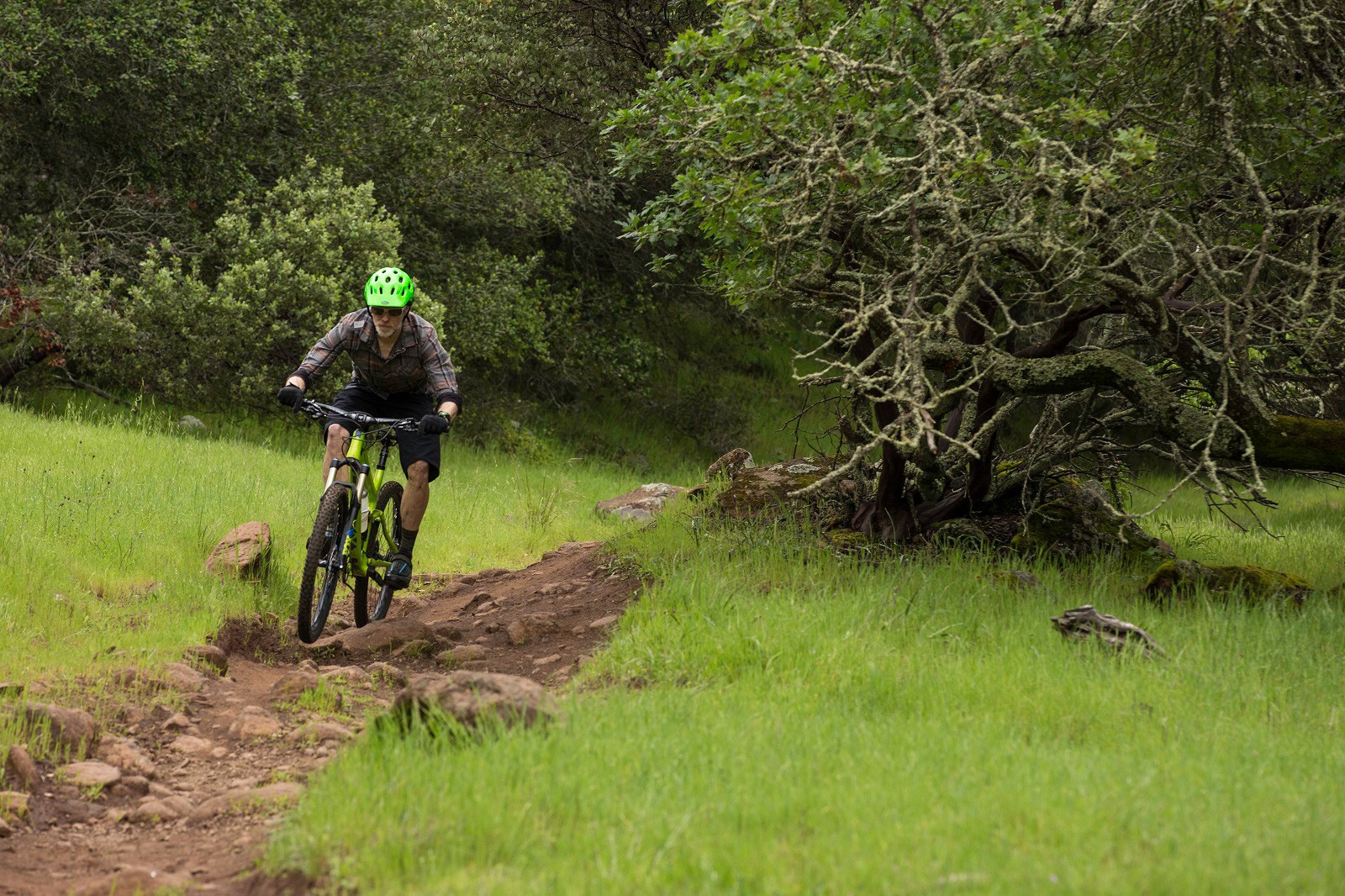 While not steep, there were a few scattered chunky bits to keep me from getting too homesick. Again, I was preferring the rollover capability of the big wheels through this stuff. Photo: Long Nguyen 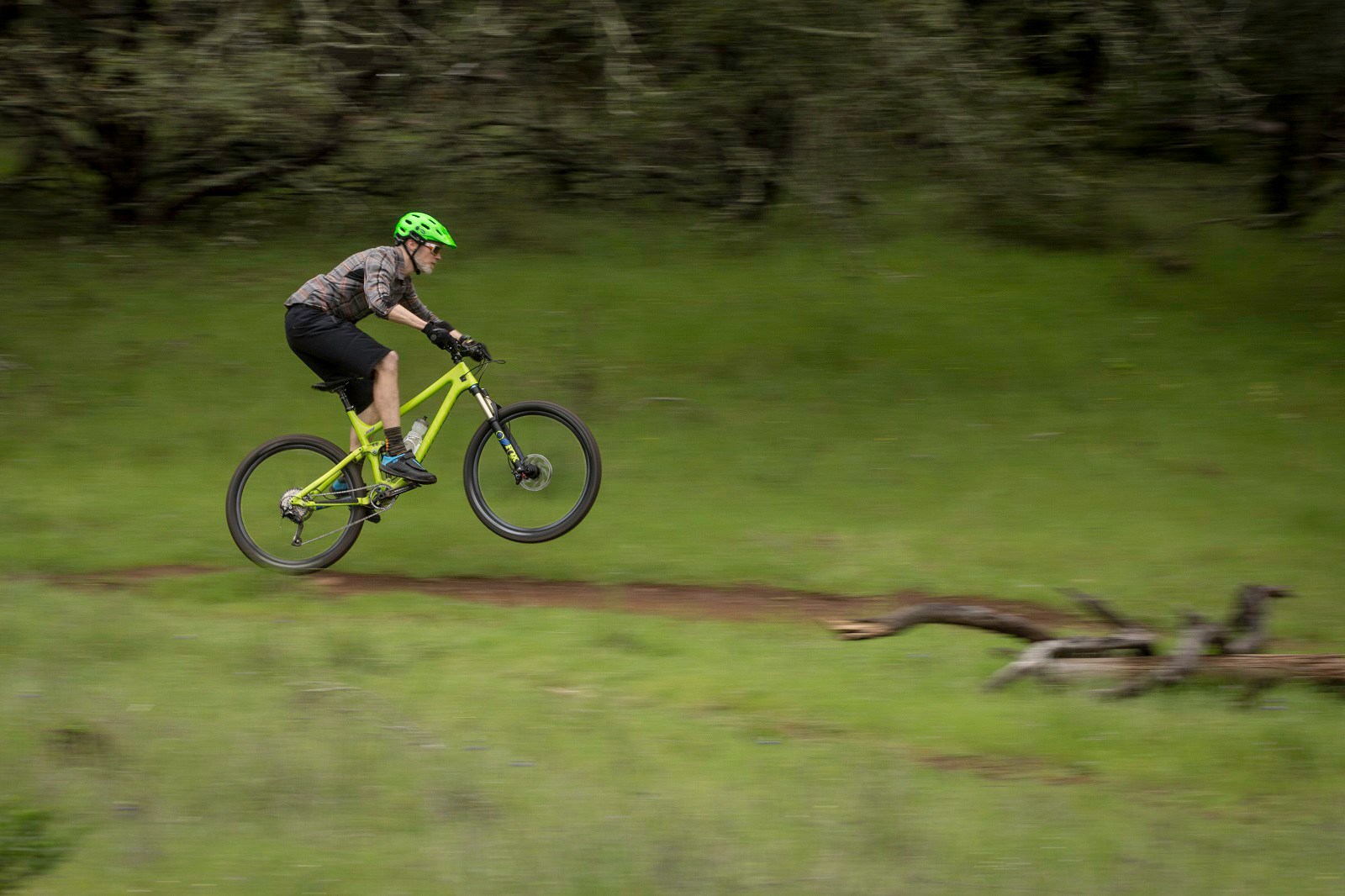 Implied speed! While these trails lacked technicality, they did not lack fun factor. A bit of quickness, with lots of mini hits & line options made for good times. Big smiles were had by all. Photo: Long Nguyen 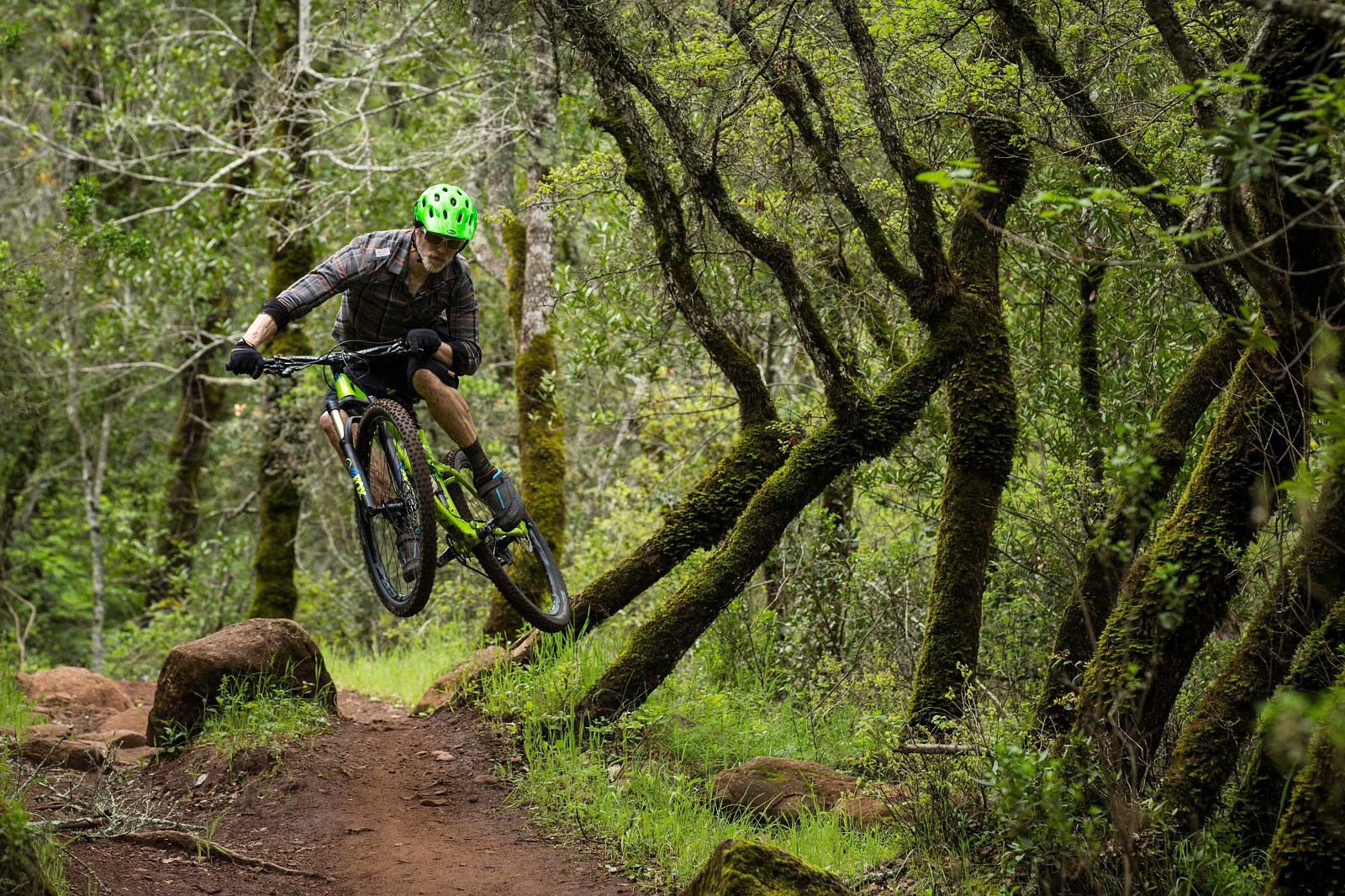 Between a rock and a hard place lies fun. On the right trails little bikes are so rad. Photo: Long Nguyen

Impressions. I like my North Shore tech-gnar, but some of my most memorable rides have been on less challenging terrain befitting a smaller bike (Chilcotins & Yukon, to name a couple). Launching the bikes on these picturesque rolling trails (as opposed to Norco’s back yard) was a good call, and really helped gain an appreciation for how well useage matched hardware can work. Right tool, and all that. Both bikes were really fun, and surprisingly capable despite my initial concerns about short travel and steep head angles (yeah, I’ve got a distinct bias, and need to get out more).

Interestingly, the spread in character between the two wheel sizes was not a significant as I expected. The geometry and suspension tweaks worked well to mitigate the differences. If I regularly rode smooth pumptrack-ish trails, or were of diminutive stature, I’d probably be looking at the 650. Adding rocks & roots to the mix sways me solidly towards the 29 – there’s no denying the steamrolling capabilities of the bigger hoops, and the differences in agility and fun factor are minimal. Both bikes were good times. 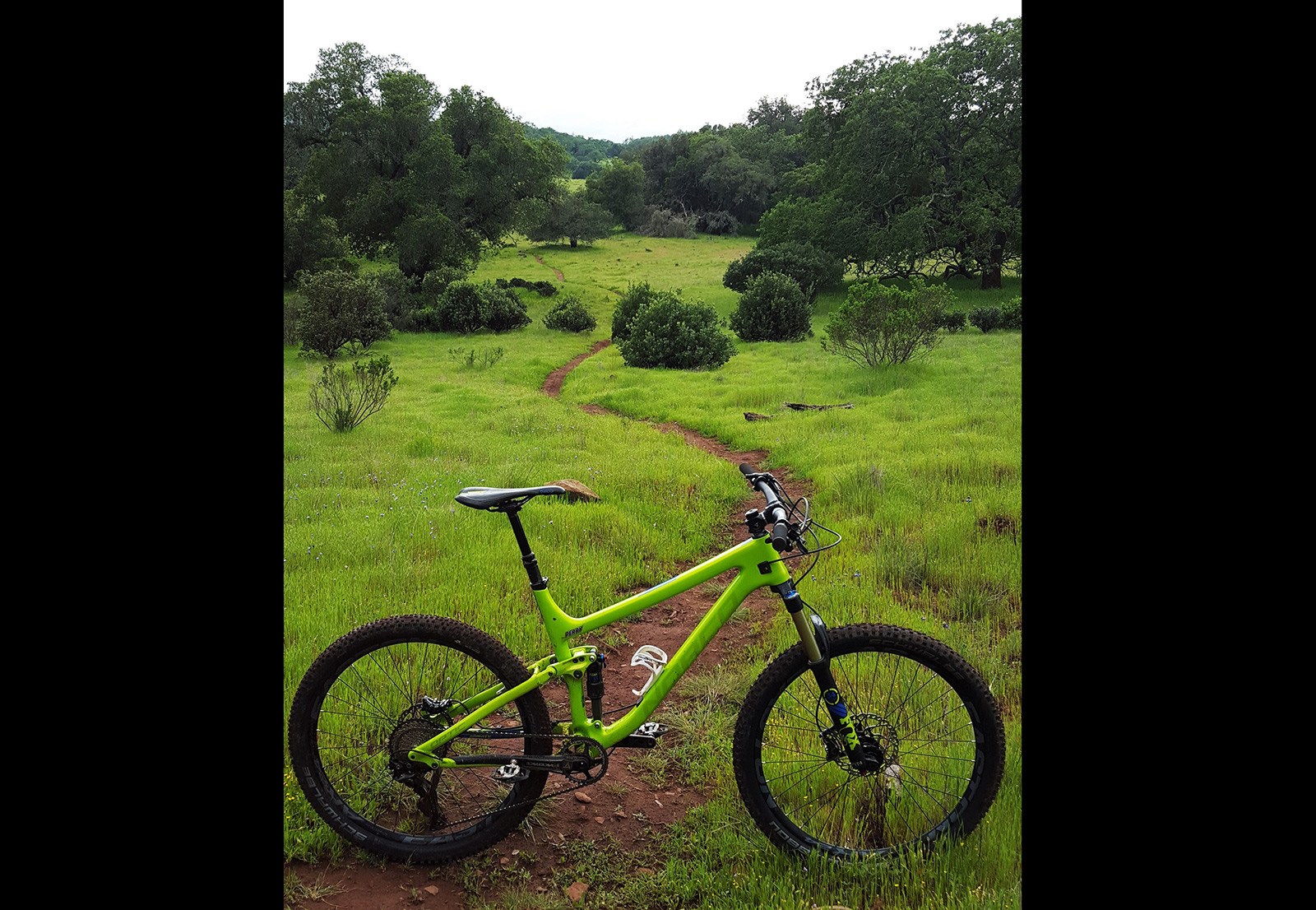 Finally – I’d like to give a big thanks to all those at Norco that put on this shindig – good people, all. I gained a bit extra respect for the company based on the people I met here.

Look at them gloves!

why is this article tagged with "27.5+" -- are these bikes plus wheel compatible?

Good write up. Both bikes look fun.
Very cool seeing my local park getting some coverage. There's a lot of great trails up there. A good combination of rocky and flowy.
Plus being close to some world class breweries is a nice perk as well.

Fun zone, for sure. Only got to ride a handful of trails, but what we saw was good. The beer was icing. Ever get to try Pliny the Younger?

"The geometry and suspension tweaks worked well to mitigate the differences" I think manufacturers should make them different enough, otherwise why make two sizes?

Suppose I could have been a bit clearer there. More like diminishing the slower, less responsive steering associated with greater gyroscopic forces via tweaking head angle, stem length & fork offset - but the benefits of the improved rollover of the large wheel is still there. The 29'er gives up little agility in comparison to it's smaller wheeled sibling. Saying that, I don't see much need for the 650 iteration myself, apart from fitting smaller riders, but Norco thought there were still enough people looking for 650's to justify the option throughout the range. Would be interesting to track the sales skews over the next year for sure.

Putting this here so I can come back to it Morgan-style in a couple of years:

I'd love to see one model with 650b rear / 29″ front. It doesn't look weird like 26″/29″ (even nerds don't tend to notice unless you tell them) and most of the advantages of a 29'er are up front (my opinion as someone who has ridden mainly 29'ers over ten years), while the 650b rear gives you shorter stays with a proper seat tube and front derailleur capability.

Full disclosure: It's what I'm riding on my personal bike.