The problem with complaining about how much everything costs and asking for value and other nonsense, is that eventually you gain a bit of a reputation. People start to assume that you’re some sort of champion for the everyman and on the hunt for low cost gear. And they send it your way. Which is a mistake. Don’t get me wrong, I hate paying for expensive mountain biking gear. But I love riding it for free. Why on earth would I want to waste my time on stuff that I can actually afford?  If you’re going to sell out, you should at least make it worthwhile. 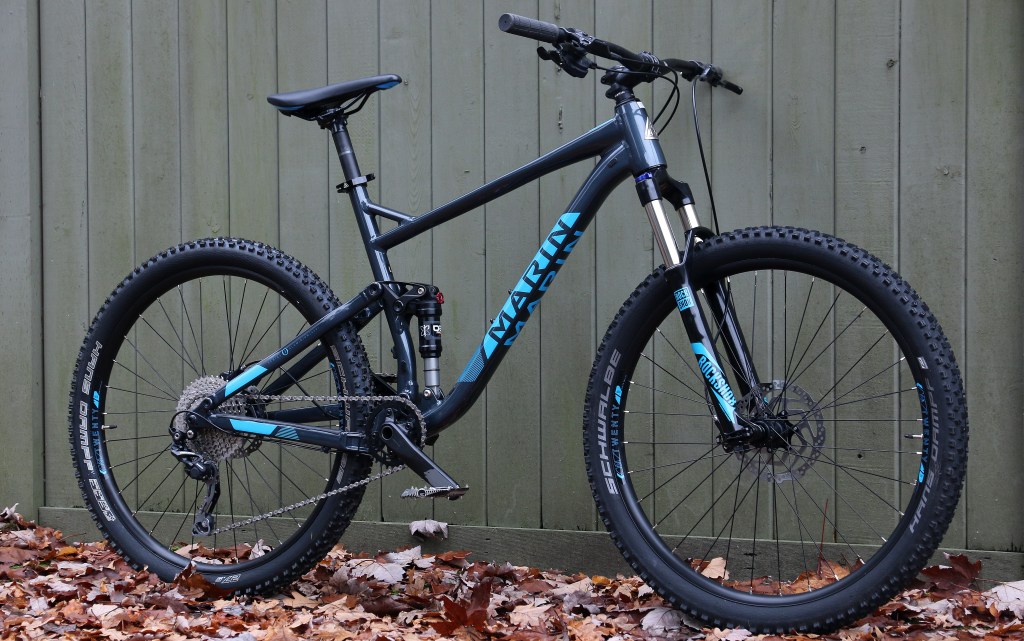 The Marin Hawk Hill cuts a nice profile. The leaves on the ground indicate my level of procrastination

So, here we have a Marin (The Hawk Hill, to be exact), which is worth about as much as the fork on the last bike I tested. Okay. Maybe the fork and the front wheel. And right off the bat I’m going to tell you that there is a big difference in these bikes. Only a psychopath would assume that a US$1499 (CAD$1899, £1499) bike is going to keep up with a $9000 bike (in either dollar). 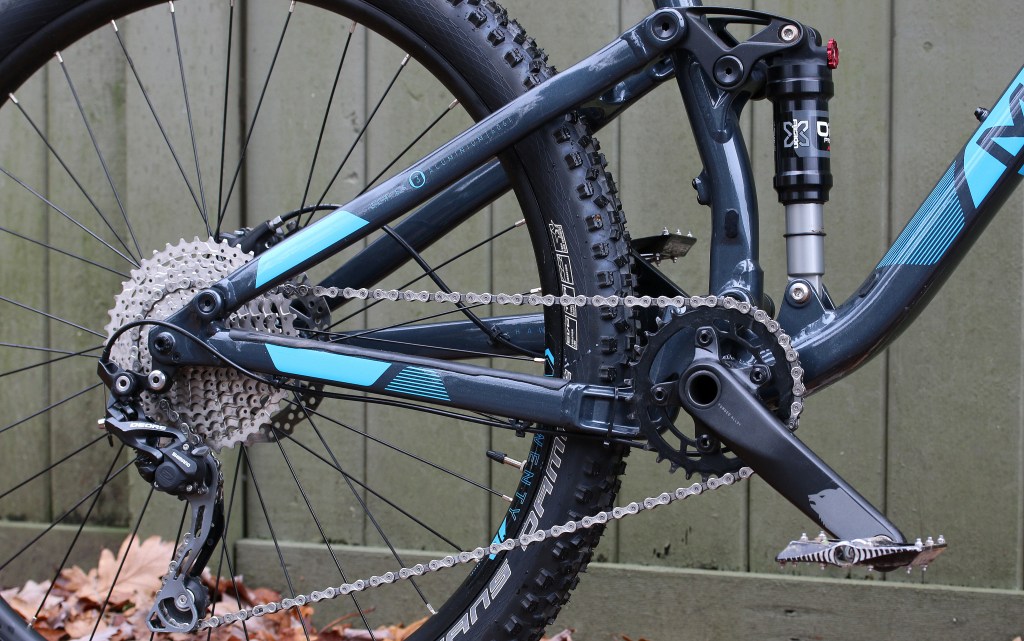 The budget 1x linkage and the X-Fusion shock are a bit of a left turn from normal expectations. The rear derailleur is clutched, something not offered by other brands at this price level.

In stock trim, this bike is fine. Nice even. If your idea of mountain biking is smooth trails and not going too fast, this bike will let you do that, no problem. It would be a fantastic purchase for an intermediate mountain biker looking to ride trails. The frame is well built and there are a lot of clever specs to stretch your dollars. I’m looking at you 10 Speed 11-42 Sunrace cassette. 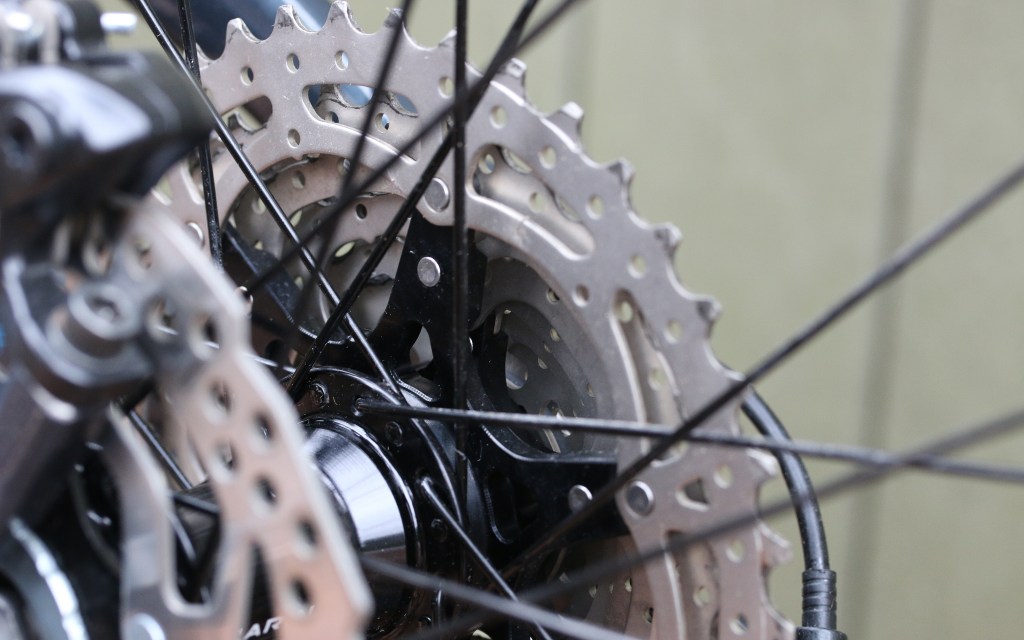 The 10 speed, 11-42 Sunrace cassette seems like a really, really good option for somebody looking to stretch their dollars. 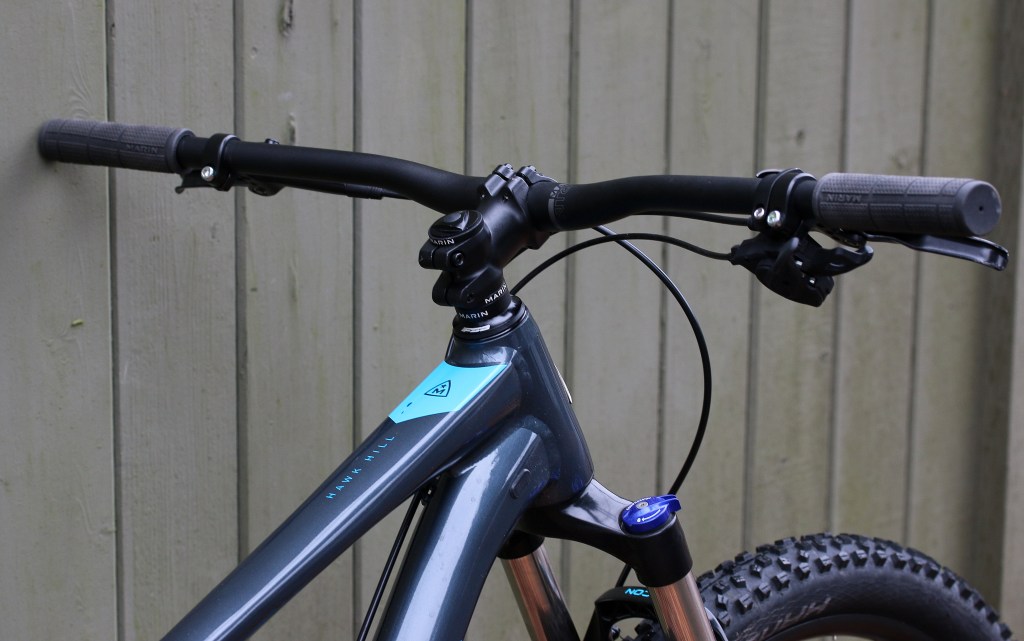 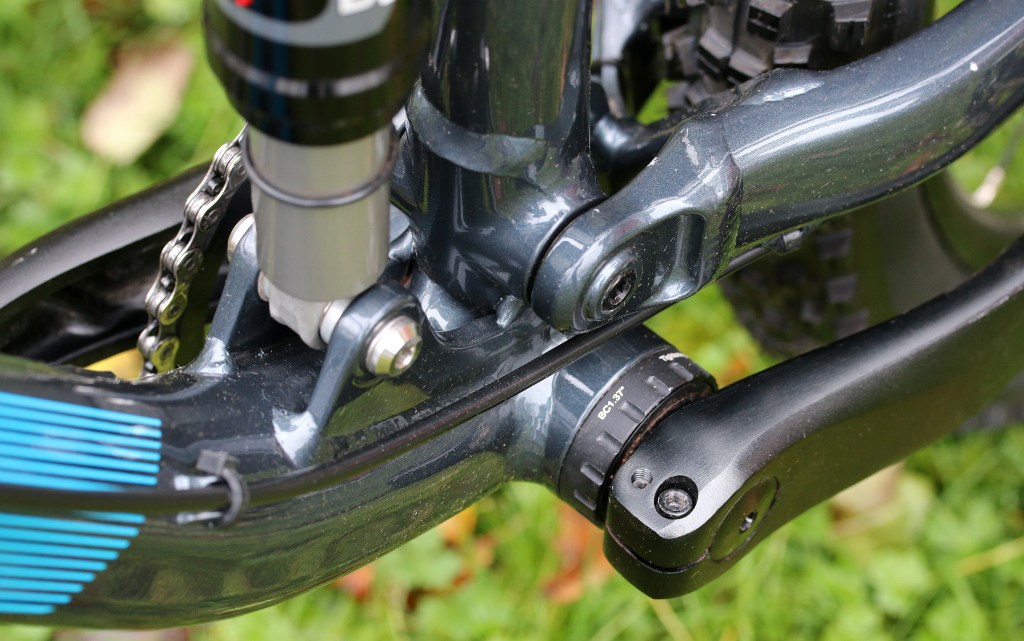 Nothing inexpensive looking in this view. 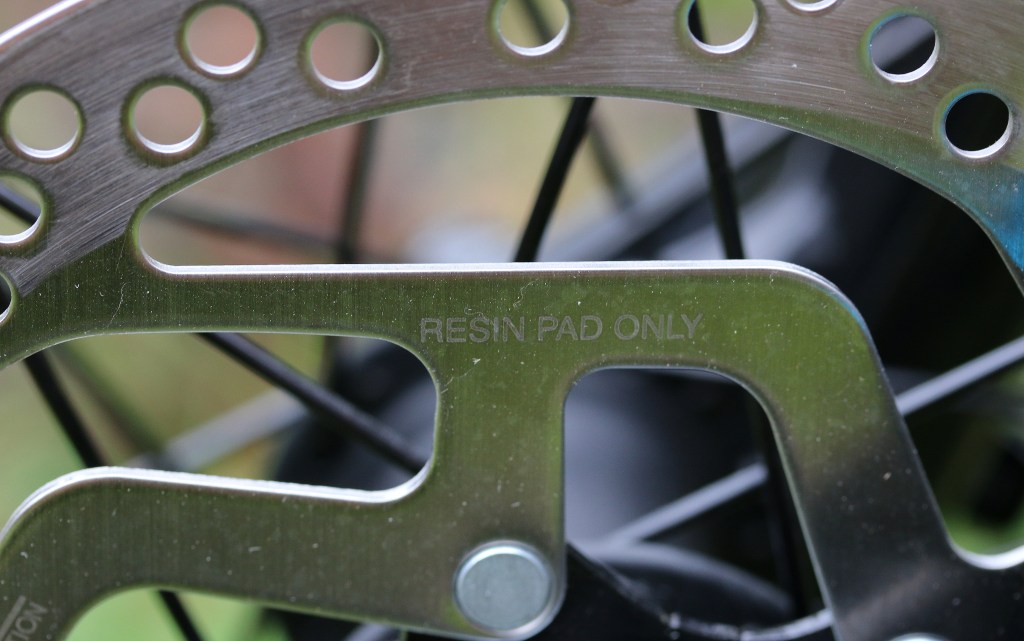 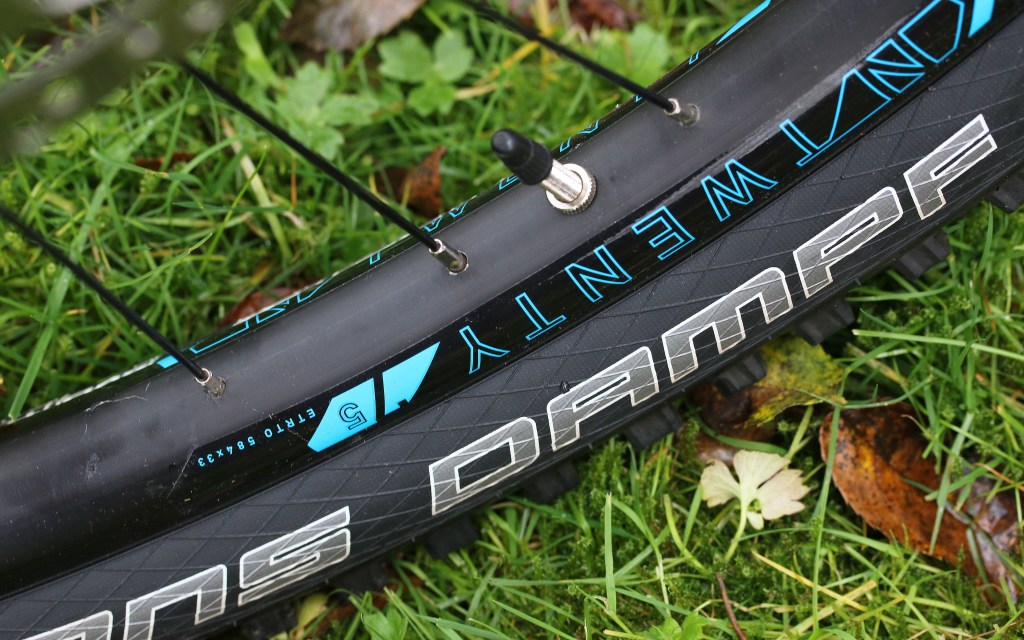 The rims are nice and chunky (27mm internal width) for whatever tires you end up with.  This non-OEM Hans Dampf somehow found its way onto our bike, but it probably won’t be there on yours. 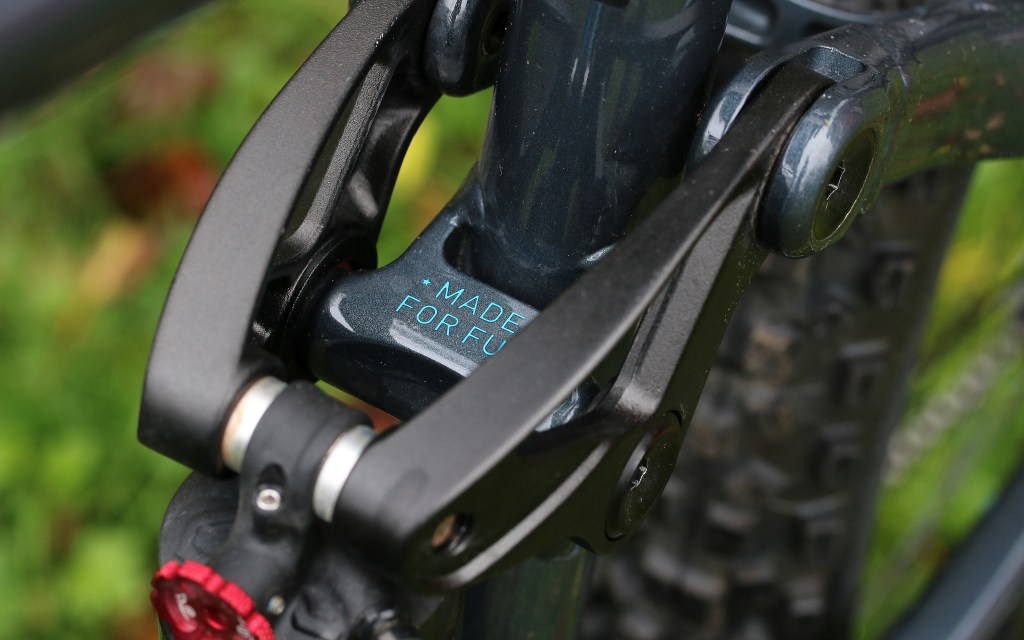 I’ve had this bike for a while, but my time on it has been limited due to snow, slow mail deliveries and outright laziness. But even with just a handful of rides, it’s obvious that there are a few things that are going to hold this bike back if the aim is to move beyond piddling around on the boring stuff. No matter the price, the brakes suck. I’ll cut Marin a teensy-weensy amount of slack for the price point of the bike (and there’s some far, far more expensive bikes that try to pull this trick), but I just can’t understand why anybody is making these “resin only” rotors. I’d rather pay $1920 for a bike with brakes that worked. Once that is fixed, the next step will probably be to look at the fork and the tires. Much like the Kona Precept I tested a couple of years back, this will be a process of seeing how much performance can be extracted via some strategic upgrades. Stay tuned.

Would you recommend this for a buddy?

Just commenting on the 10spd Sunrace cassette. I purchase the all steel version almost a year ago, and have found that it wears extremely well compared to running my typical shimano + aluminum expander ring. It's also close to the same weight. If I stretch it (pun intended), I'll be on my 3rd chain with the same NSB NW ring, and 1 year of hard use this spring. Definitely buying another one for the summer.

That is all. Nice to see mostly capable bikes like the Marin being sold at reasonable prices so not to scare the budget newbies away immediately (Edit: I can't believe I'm jealous of the internal rim width of a sub-$2000 bike).

I love seeing articles/reviews like this. I'd love to see one of Fuji's Reveals or one from Haro's Shift platform too. Superduperwunder bikes are great and all, but not all of us want to plunk down $5k+ on a bike, even if it would make us better riders. Or at least make us feel like it.

One of the most impressive things about this bike for me is how polished it looks. This is a very nice looking bike. IT doesn't appear cheap at all.

Also something that we missed is the fact that the rims are tubeless compatible. Marin has also confirmed that those are the tires you'll get when you purchase the bike.

Not a bad looking bike for the money. Good luck!

Hard test to write, and glad you are doing it. An expert-level rider looking down the food chain will always find things to improve, even if "just for a few more $…" However, this may be a fantastic upgrade, as is, for the person moving up from a $700 bike (or no bike) that only had $1,200 US to spend, but is gonna eat KD for a six months to afford the $1,499 price…

I agree. This would be a fantastic upgrade for somebody coming off a $700 bike. And I see your point about the price point, and it becomes an exercise in how much slack should be cut. The way I look at it is that any part that shouldn't have been made in the first place, and needs to be swapped out or upgraded before the bike leaves the store, is counterproductive to keeping the price low and needs to be called out. Cut some slack on the nice-to-haves.

I don't have as many concerns about those brakes - I've ran those, and being a tubby untalented 240lb rider at the time riding in wide open high speed trails, they weren't awful. The resin pads do feel a bit more grabby, but considering what else is in that price range, it's a concession I'd make to get better rims and tires out of the box.
Considering that the market they're after is riders who would otherwise be on $800 hardtails or $1200 FS buckets, it's actually a brilliant bike.

What I'm interested in is if there is a realistic opportunity of getting it kitted with line Deore brakes and rotors, lock-on grips, and speccing it with a KS eTen-i - because that would be a $1649USD bike, and have EVERYTHING an aspiring rider on a budget could need. [unsure what that comes out to with the latest Greenbacks-to-Moosenopoly conversions].

They could probably also do an up-rated one - SLX drivetrain/brakes, run upspec Trace Fork and HiLo dropper… No reason they couldn't make that with some other minor cockpit/cosmetic upgrades and also monkey-stomp the $2500 USD market with that bike.

I'm not speaking for Dave but I think he was referring to the rotors? In my experience the brakes are surprisingly good… it's the "Resin Only" rotors that are the problem. A minor upgrade at the OE for a big improvement.

My problem is that I upgraded the whole package at once, including a larger front rotor - so it was a night and day improvement… but the cost delta on rotors is really small, and to be honest the RT-66 rotors look a ton better for an $11 difference - I totally concur on that front, I'd just put a bit more love around on that and go to the Deore marked brakes at the same time. I forget that I'm from a dry climate, so the resin pads aren't as problematic for me