Earlier this year Kona launched some fresh rides for 2017, with two standout mentions; the Hei Hei Trail bike and the 27.5 Operator downhill bike. Kona invited a bunch of media nerds out to Retallack Lodge in British Columbia’s Selkirk Mountains to check them out. I’ll cover off the Operator first. Look for Part 2 on the Hei Hei Trail coming soon.

While a carbon version would be nice, and would shave a bit of weight, don’t immediately discount the 27.5 Operator. 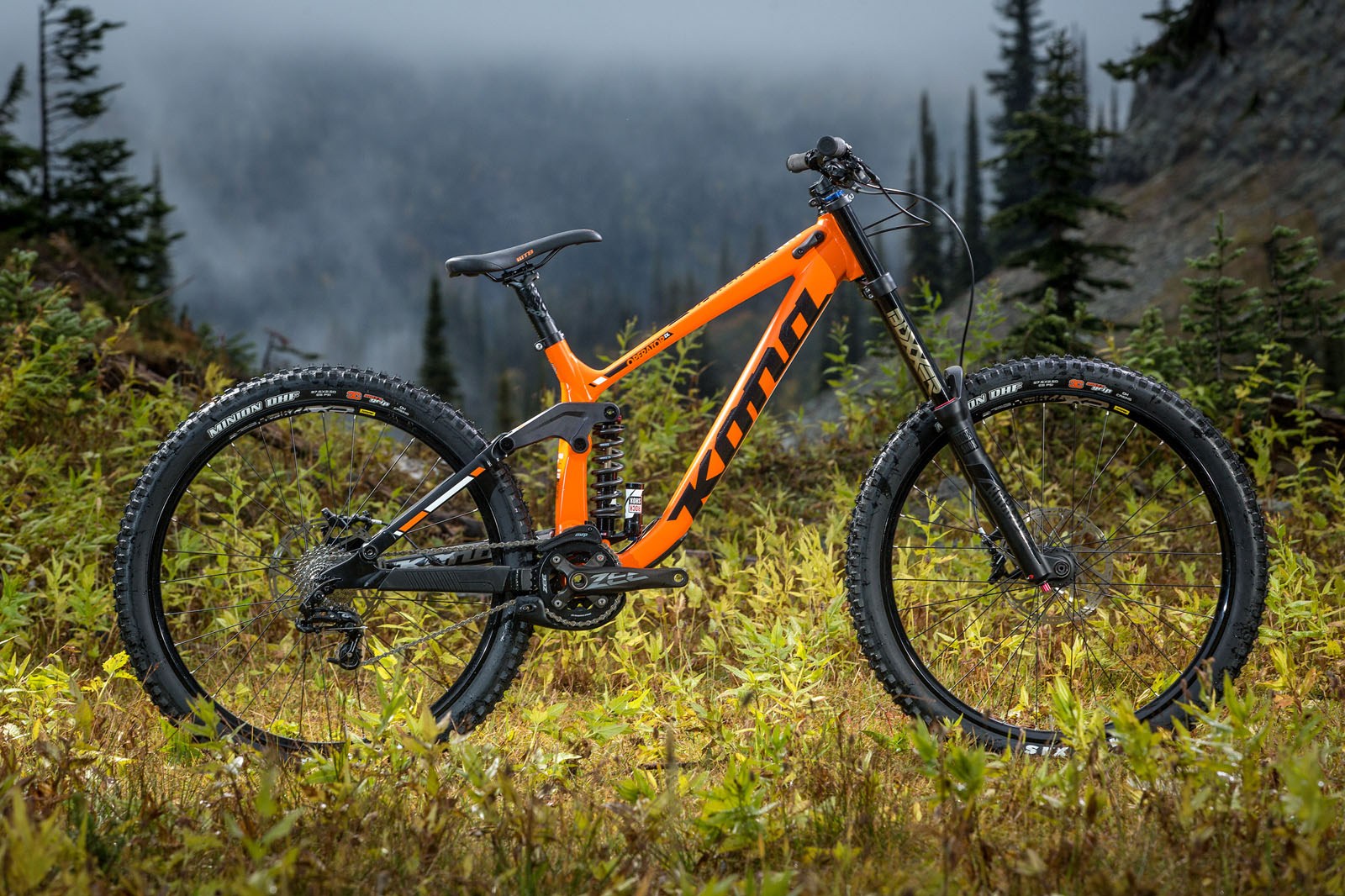 The 2017 Operator is available with an aluminium frame only, and it comes in three build flavours; the $4,499 Operator, and at $5,299 CDN the Operator DL. There is also a top spec Operator Supreme, but it is not available in Canadaland. Before you scroll down to the comments and ask, “well but where’s the carbon version brah?” Kona has made the decision not to immediately offer the Operator in carbon. While a carbon version would be nice, and would shave a bit of weight, don’t immediately discount the 27.5 Operator. Connor Fearon seems to get along just fine on his, finishing 5th in the World Cup overall standings, and on a bog standard alloy Operator to boot. Kona decided to stick with alloy only for the time being to allow them to develop the bike geometry in aluminum before investing in a set of carbon frame moulds. The 27.5 Operator frame weight is apparently similar to the outgoing Operator carbon, and it doesn’t give up any stiffness. 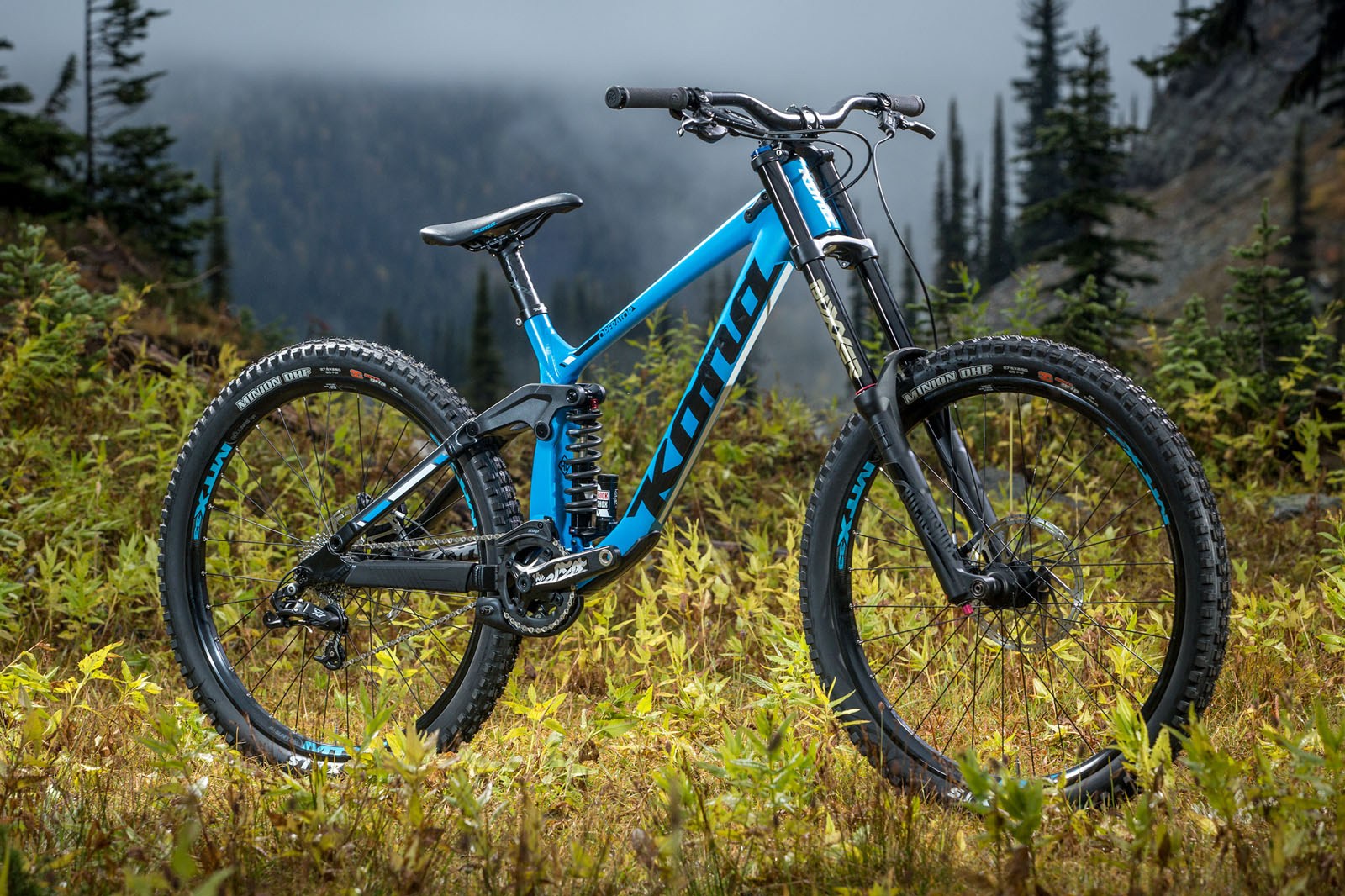 The base model 2017 Kona Operator. For a price point bike, it appears to have a well thought out build spec, and looks good in the flesh 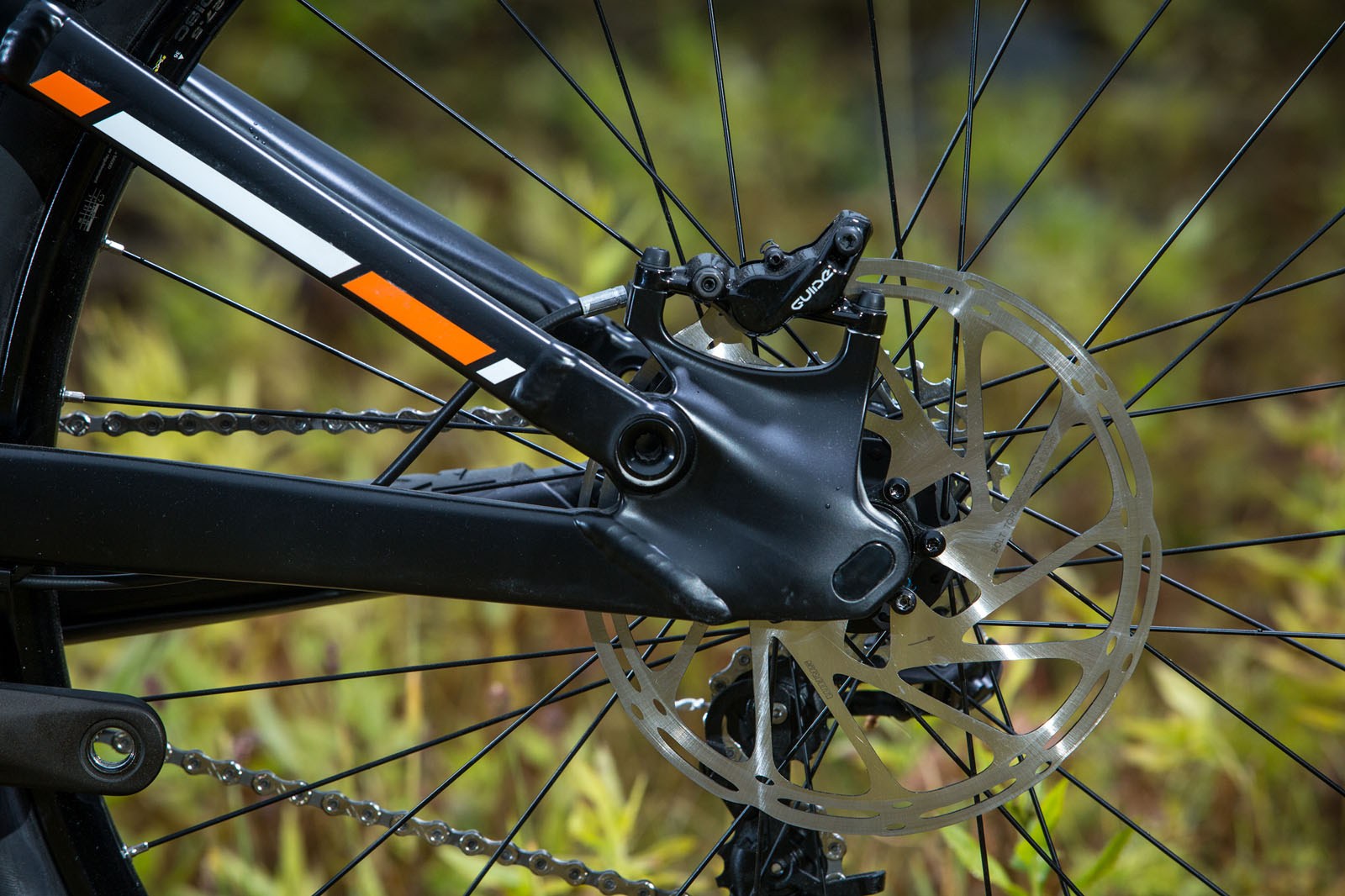 It’s not immediately obvious, but this oval shaped piece in the drop out is the rear through axle. The other side is threaded. A screw on the drive side threads into the axle. With the non-drive side of the axle being oval and keyed to the frame, only one Allen key is required to secure the rear axle. 200 mm direct post mount for the rear brake.

Suspension-wise, Kona has moved the main pivot up the seat tube slightly, which should improve square bump compliance. The suspension leverage curve is more progressive than the old Operator, which should help resist bottoming through large compressions. 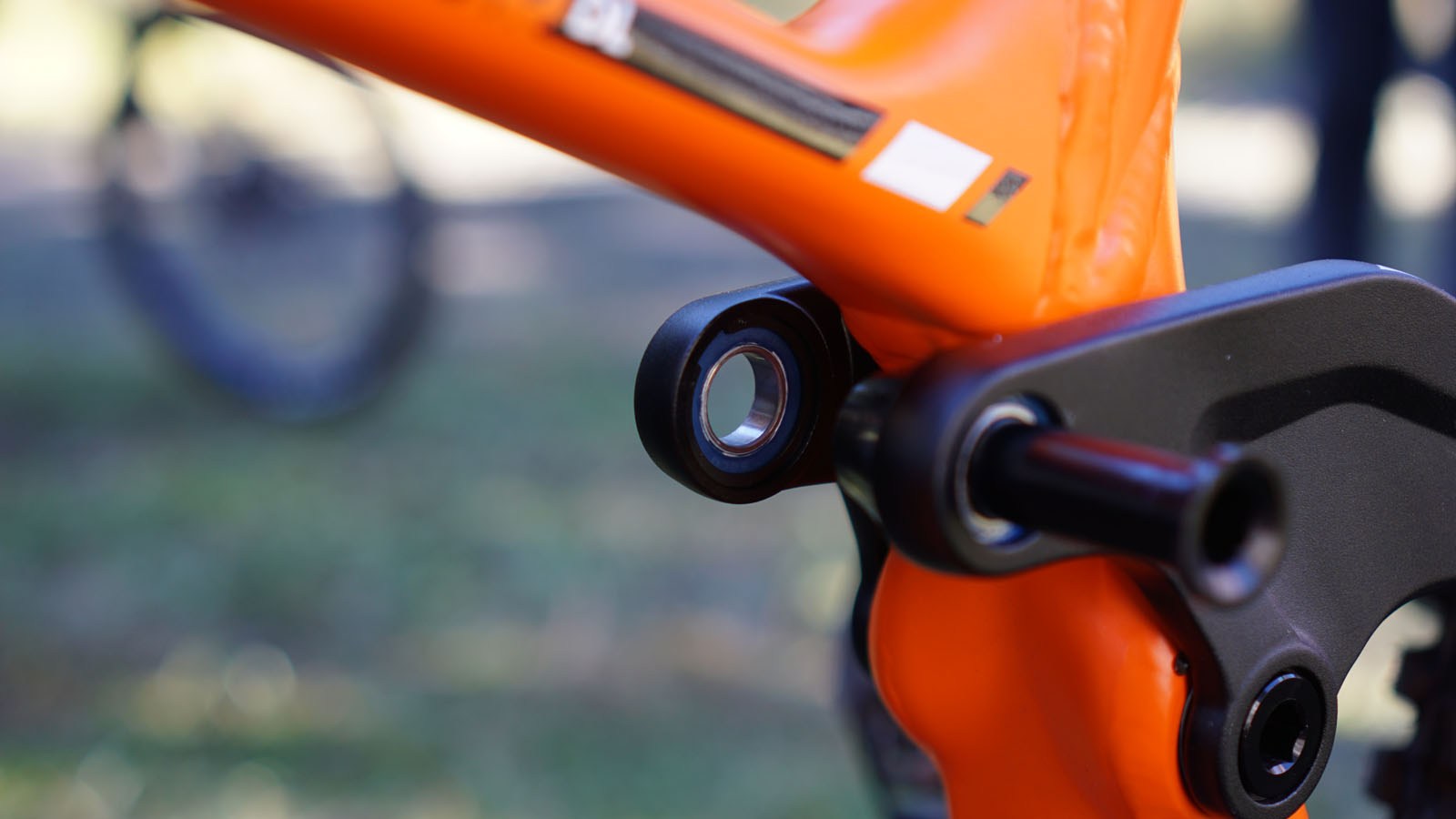 Kona has opted for large bearings in the rocker to support the shock load in place of the old DU bushing. Kona believes this has less rotational friction than a DU bushing, which should  reduce friction on the suspension, and ultimately improve suspension performance. 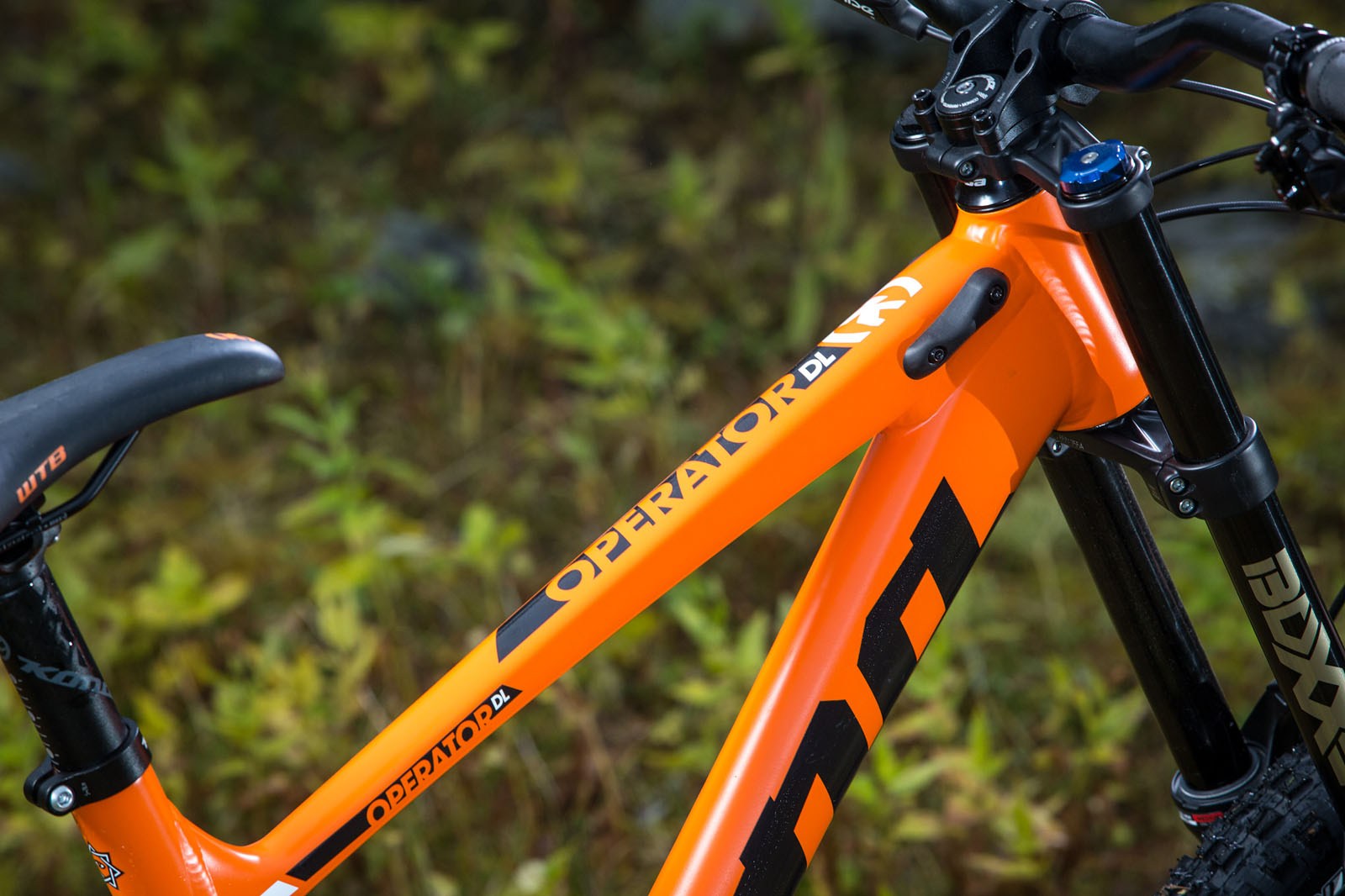 The integrated fork bumper looks nicely sculpted and seemed to interface well with the Boxxers on the bikes. 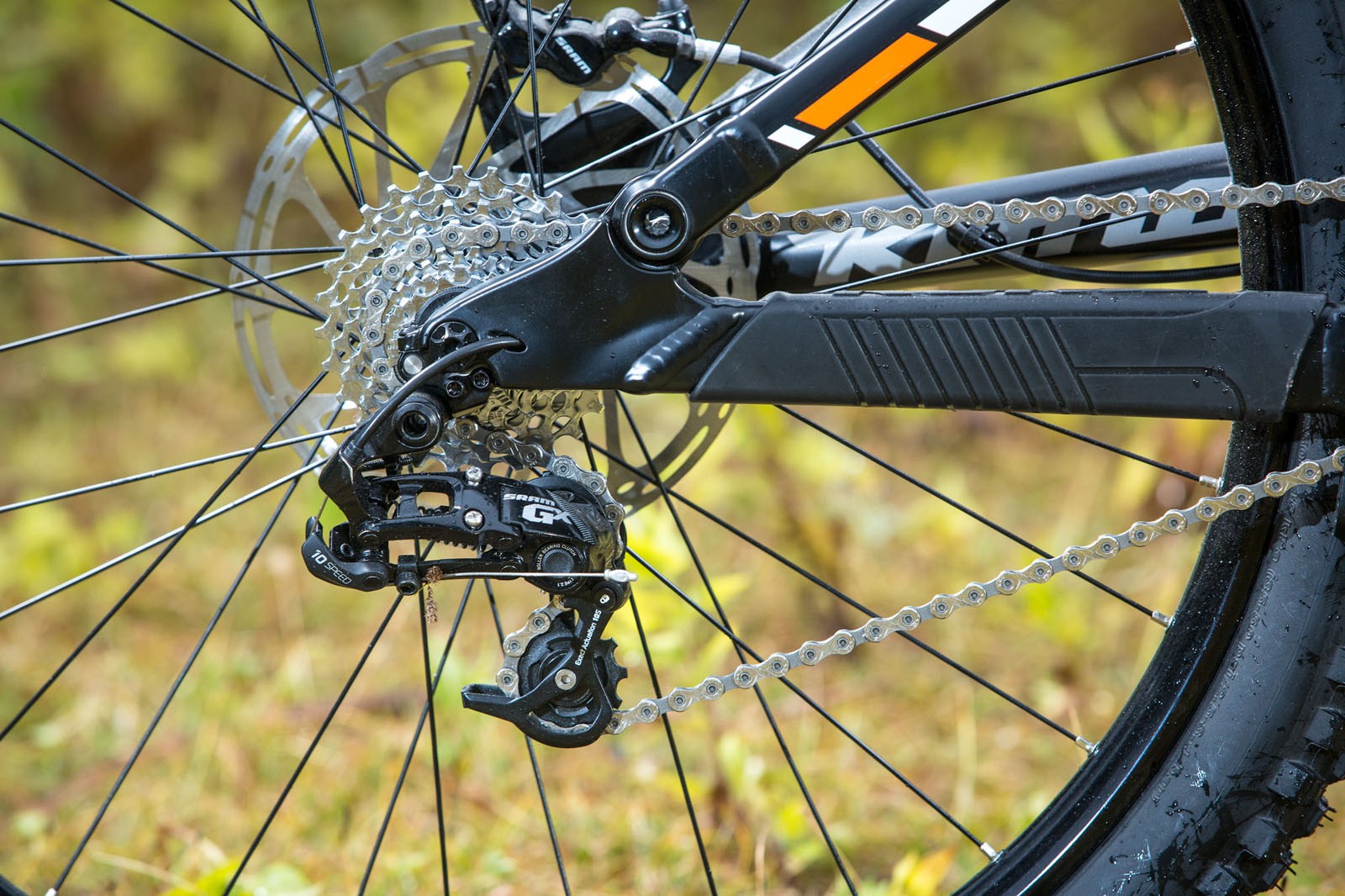 The derailleur hanger is interesting in that it is bolted to the frame with rotor bolts. I’m all for standardizing and reducing the hardware needed for a bike.

Ian Schmitt, the product manager, emphasised that Kona’s goal with the Operator was to offer a durable bike suited to seasons of downhill / bike park abuse. The pivots and tubing are all oversized, full-length cable housings, integrated fork bump stops, and integrated chainstay protector. All features that play to the Operator being a gravity fueled workhorse. 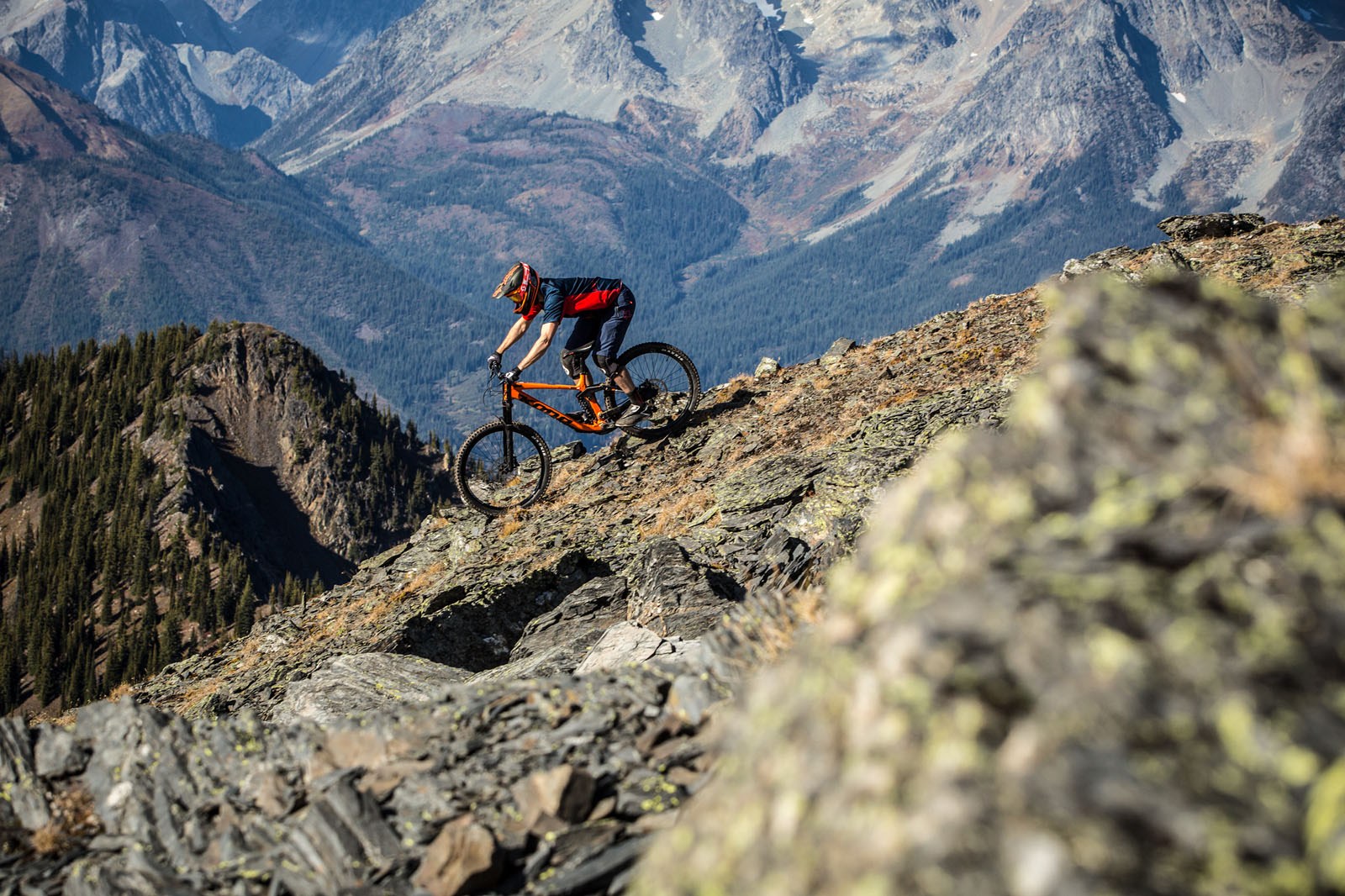 I was comfy on the Operator right away, and that’s a good thing, because out the box, we were in unforgiving terrain.

Kona doesn’t believe in boring presentations, so us journos were given a quick high-level intro to the new Operator, and then it was straight out to the trails; just my kind of party. My first impression sitting on the Operator was that I thought the front center was a bit short. Right away I was yearning to try the XL instead of the assigned Large. Once I got my fat ass off the saddle and stood up, the front end length felt comfy. What the? After some confusion and pacing about, I worked out that the Operator has a relatively steep seat tube angle, so the saddle is a little further forward than on some other DH bikes. Once I was up and riding the cockpit felt nice and roomy. This seat position gives the rear tire a bit more room. The downside to this is that the seat might get in the way of the back of you knees in the corners. Even though the Operator has a decent length wheelbase, I’d still be keen to have a go on the XL. 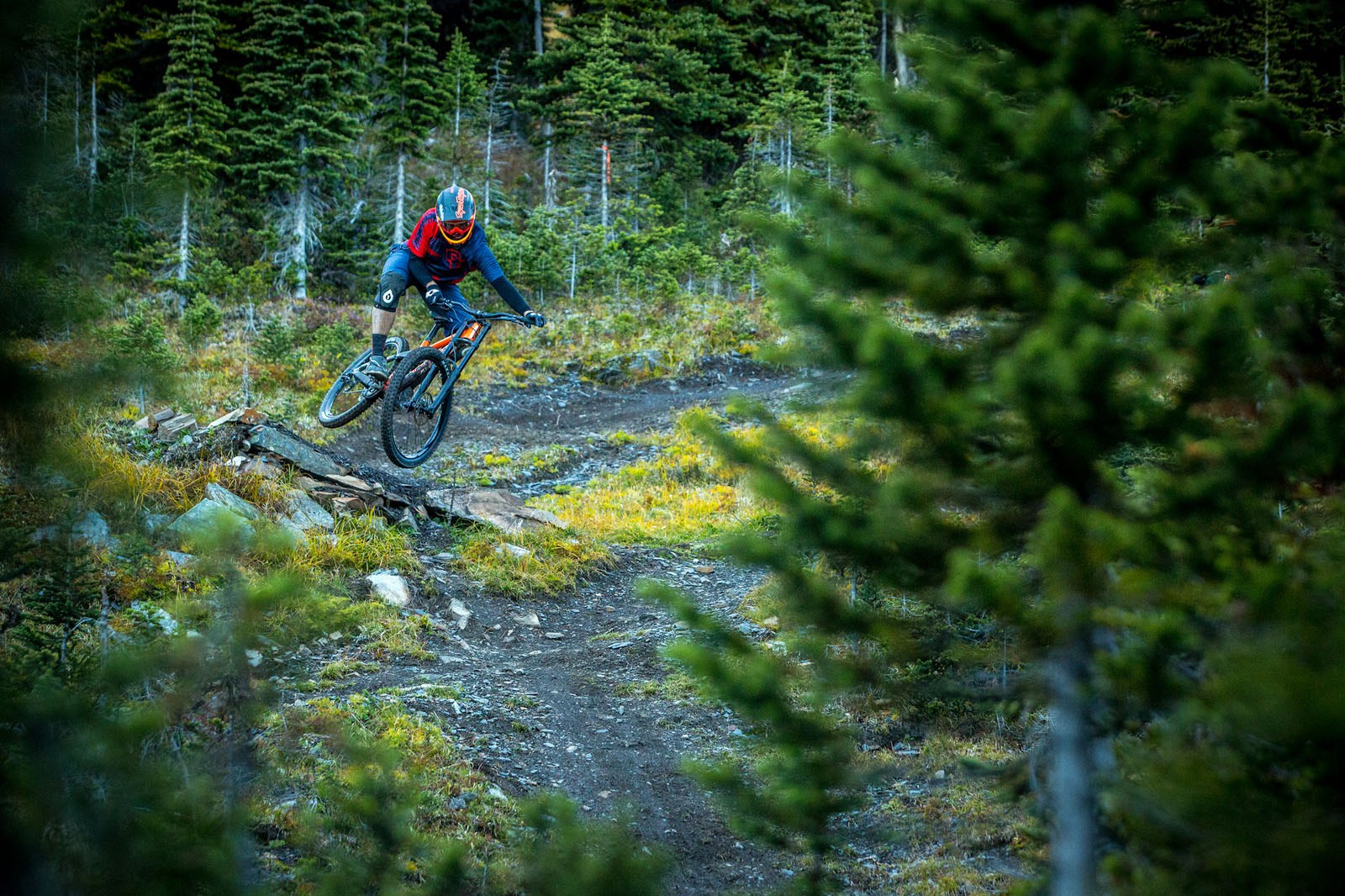 Knees out wider than Borat’s sister. I’m going to start riding with a bungee cord wrapped around my knees. But I’m tongue out and having a blast, so the style police can sod off.

Two corners into the first trail, I couldn’t help by giggle out loud at how willing the Operator is to dive into corners and power wheelie out. This bike just wants to party.

The single pivot layout that Kona has picked might not be the most neutral in the braking department, but I only noticed the rear brake influencing the suspension on the roughest bits of trail. Then again Retallack doesn’t have any truly nasty bumped out trail. Rear stiffness felt excellent and felt neutral leaving the ground. 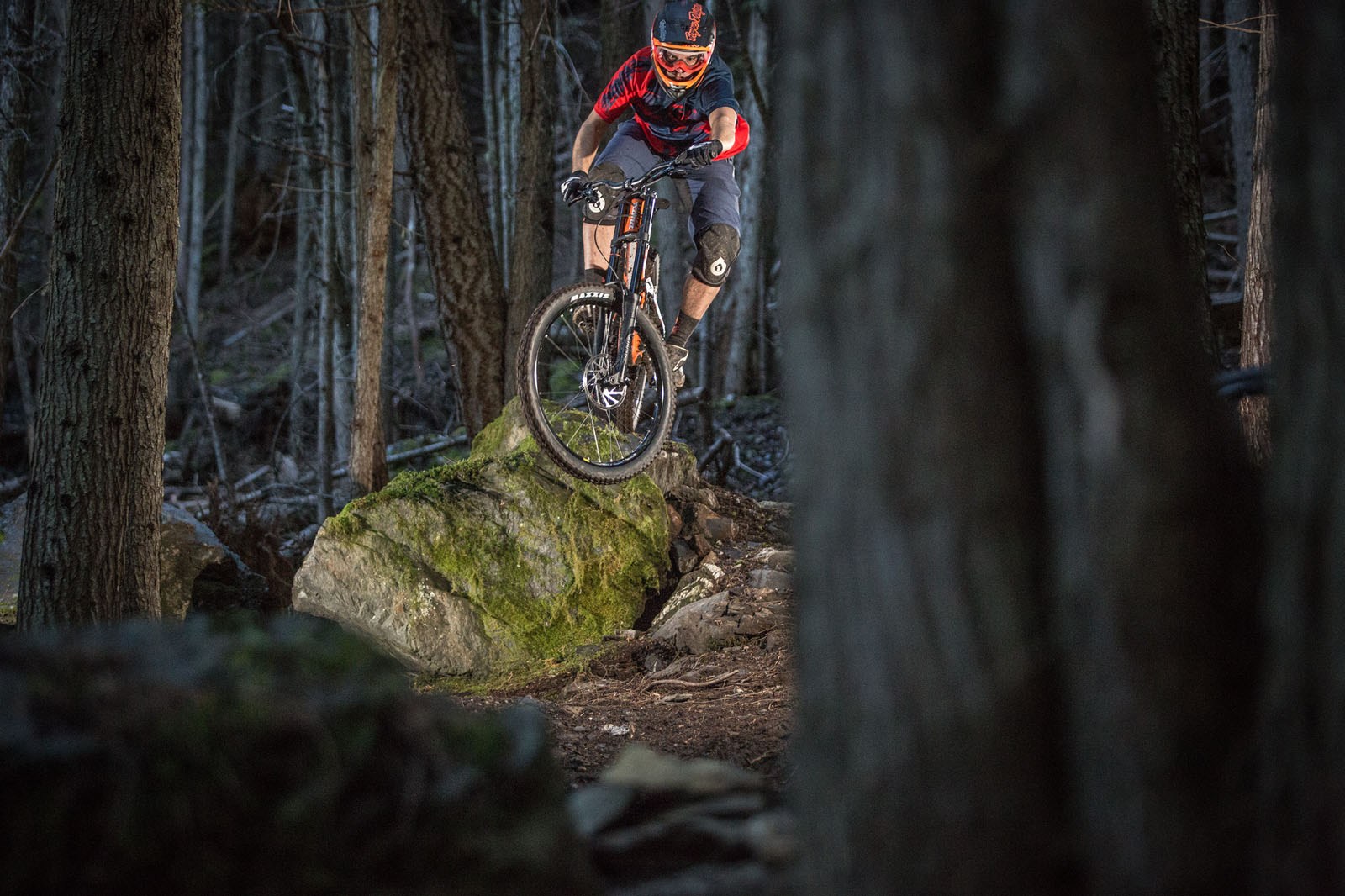 This was a semi awkward move, across some roots, off a rock, and straight in a tight left corner. The Operator just simply partied through here.

I rode the mid level  spec Operator DL and was impressed with the smart component choices made by Kona. My only minor dislike was the Guide R brakes, I’d prefer to have seen a set of Code Rs instead. The coil sprung Boxxer RC and Kage RC did an admiral job of dealing with small bumps and big hits. I really like the progressivity of the rear end Kona has picked that offered loads of ramp in the suspension, without the Operator feeling mushy at sag. The Operator DL might be heavier than some other options on the hill, but I really only noticed this when lifting the Operator into the shuttle truck. 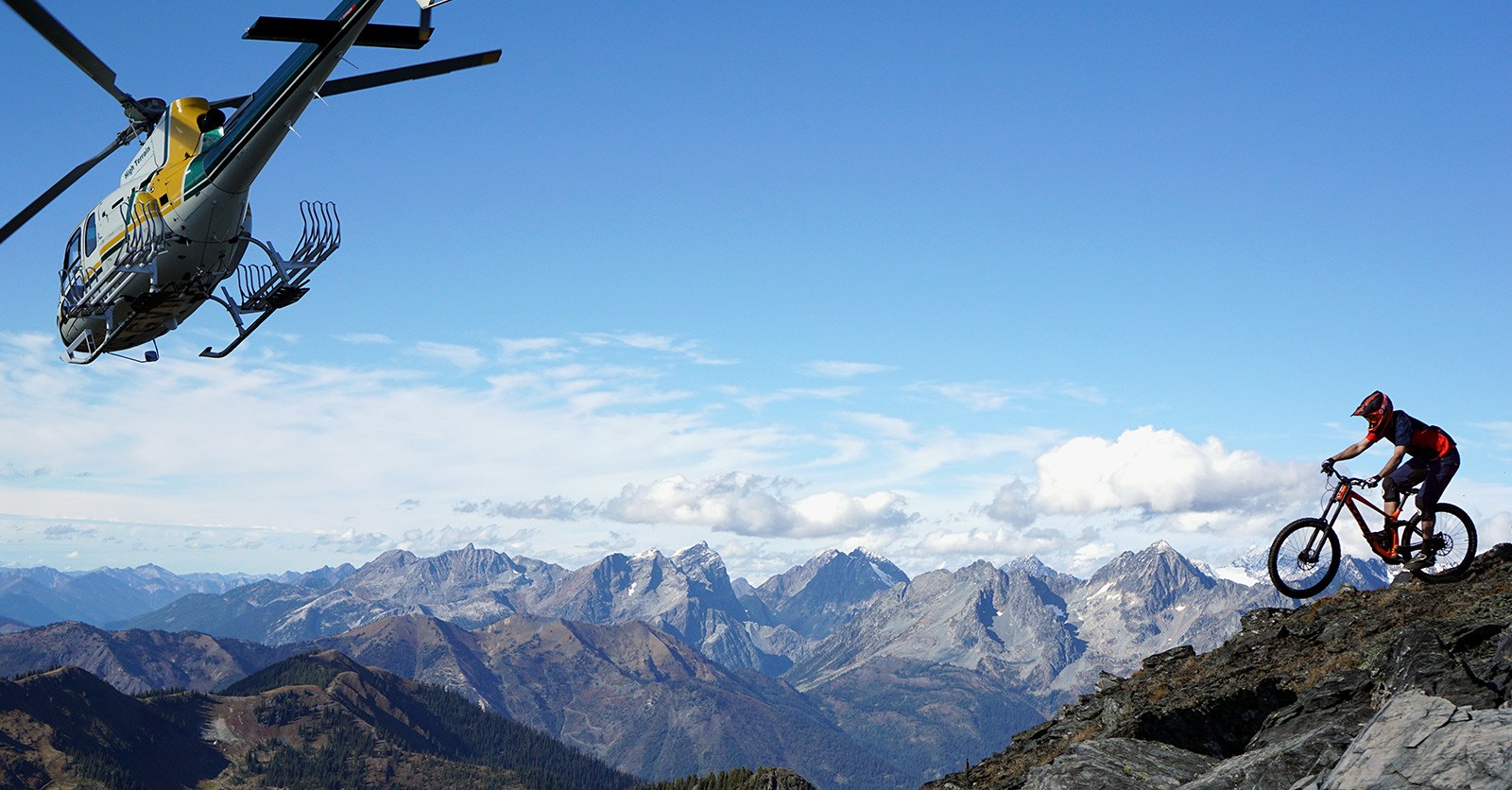 Not a bad day in the office. Photo – Eric McKeegan.

The new Operator DL 27.5 is living proof that you don’t need the fanciest bike on the planet to have an absolute giggle on the trail. The Operator begged to be smashed in to corners, do power wheelies out, and generally cavort around the mountain with a stupid grin plastered all over your face. While I personally would like a longer bike, with longer chain stays, I think the geometry choice Kona has made is smart. It might not be 17 feet long, or optimised for the nastiest World Cup DH tracks, but how many of us can truly ride bikes that long? For the vast majority of us that just want to do skids in the bike park with our mates, the Operator is an absolute hoot.

The mid-spec bike I rode had a well thought out build, and I enjoyed the coil sprung dampers front and rear. All that said one day is not enough time to develop a ton of insight or test the durability. The Operator might not be the fanciest thing ever made, or the lightest, or the longest, or the most expensive, or the most aggressive. But it left me with a mighty grin, and isn’t that the whole point?

For more check out the Operator on konaworld.com

Knees out but at least we got you to wear normal socks! This Admiral salutes you.