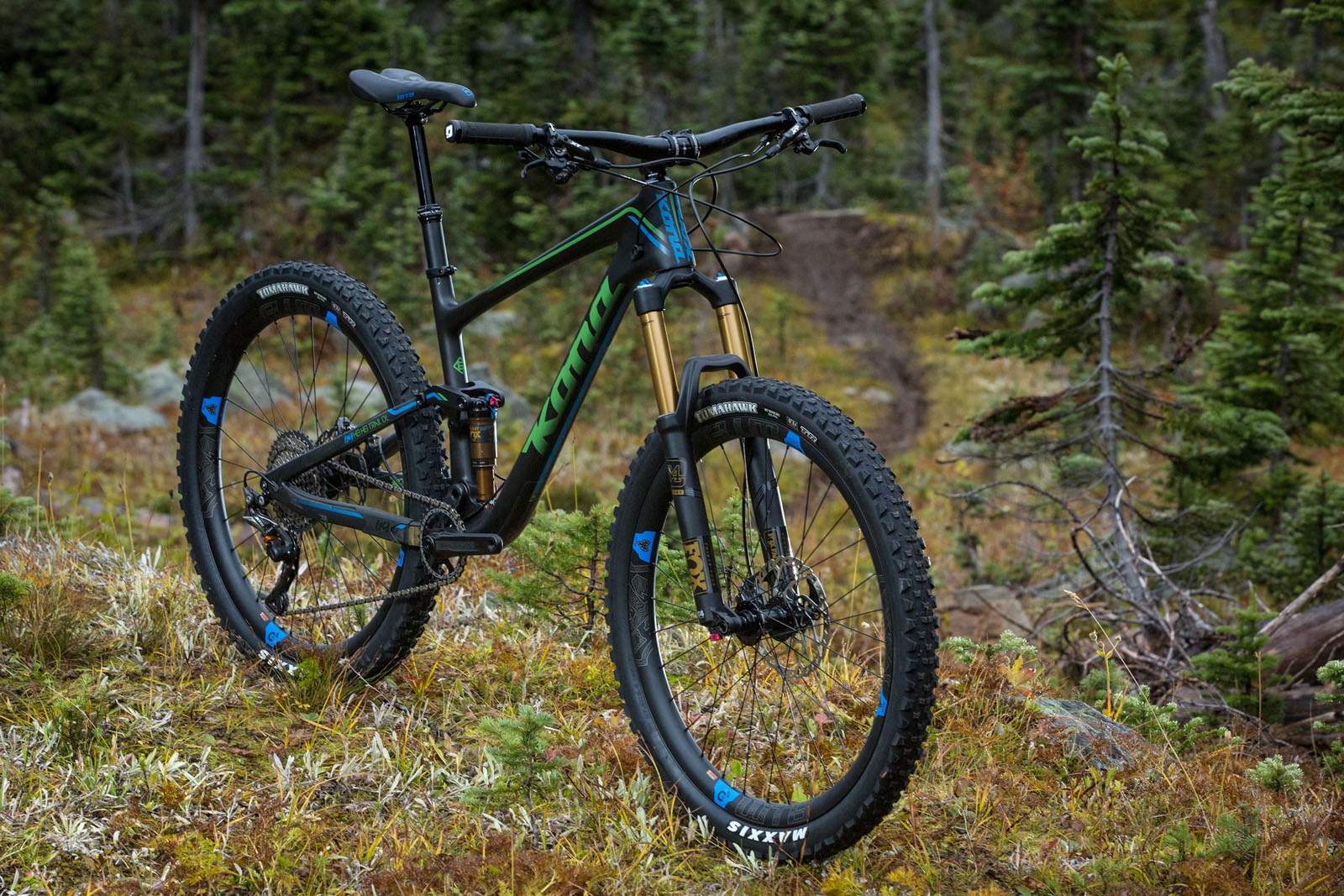 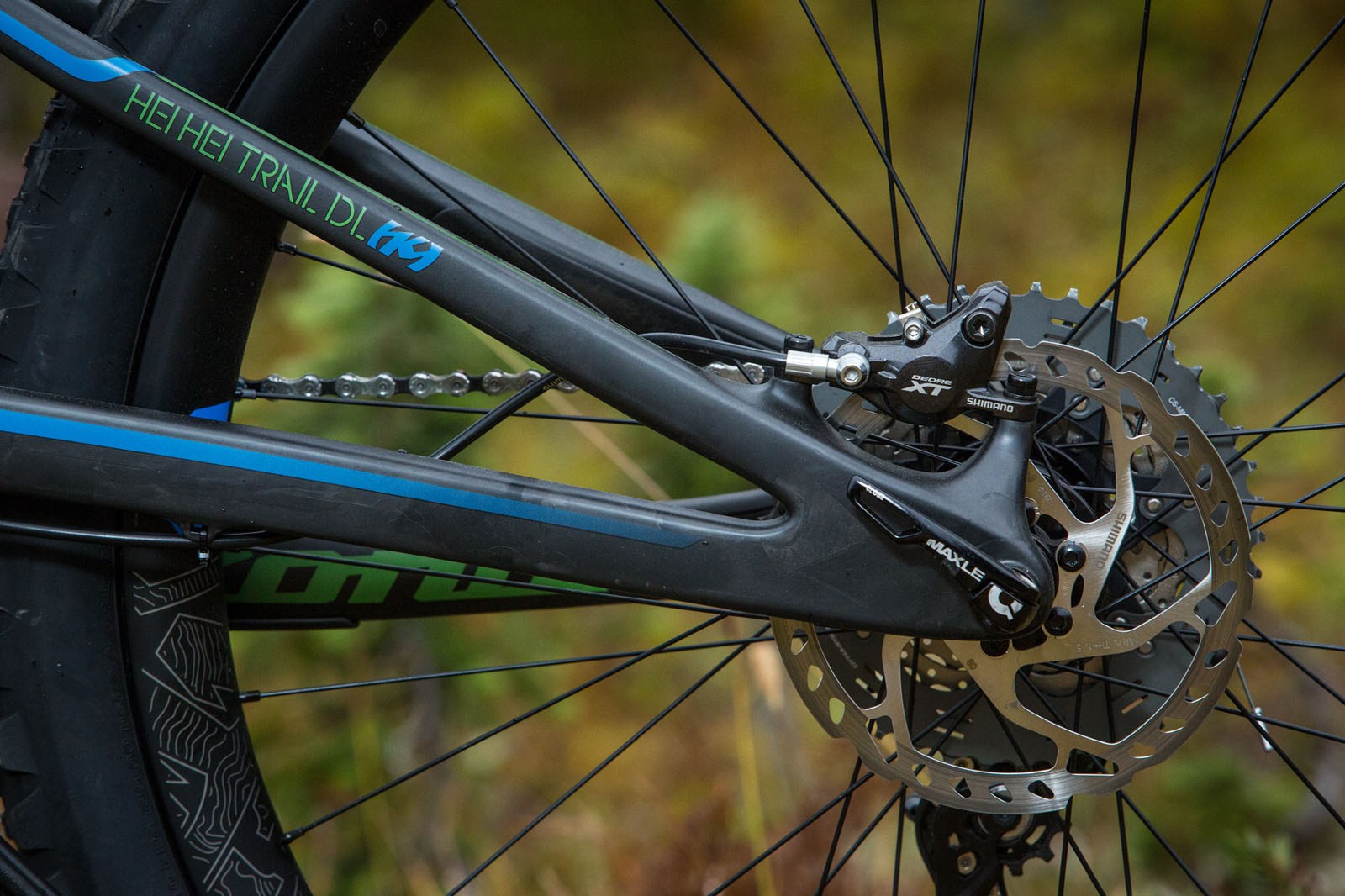 The fit geometry was selected to be consistent with the rest of the Hei Hei line, which is less aggressive than Kona’s Process range of bikes. The Hei Hei Trail has a head angle that is 1-degree steeper, and a reach that is 20 mm shorter than the similar travel Process 134. Kona chose a relatively high pivot for the swingarm, which should result in improved square bump absorption. I thought this was a bit odd; going with a less aggressive front end, but more aggressive rear end in comparison to the Process 134. 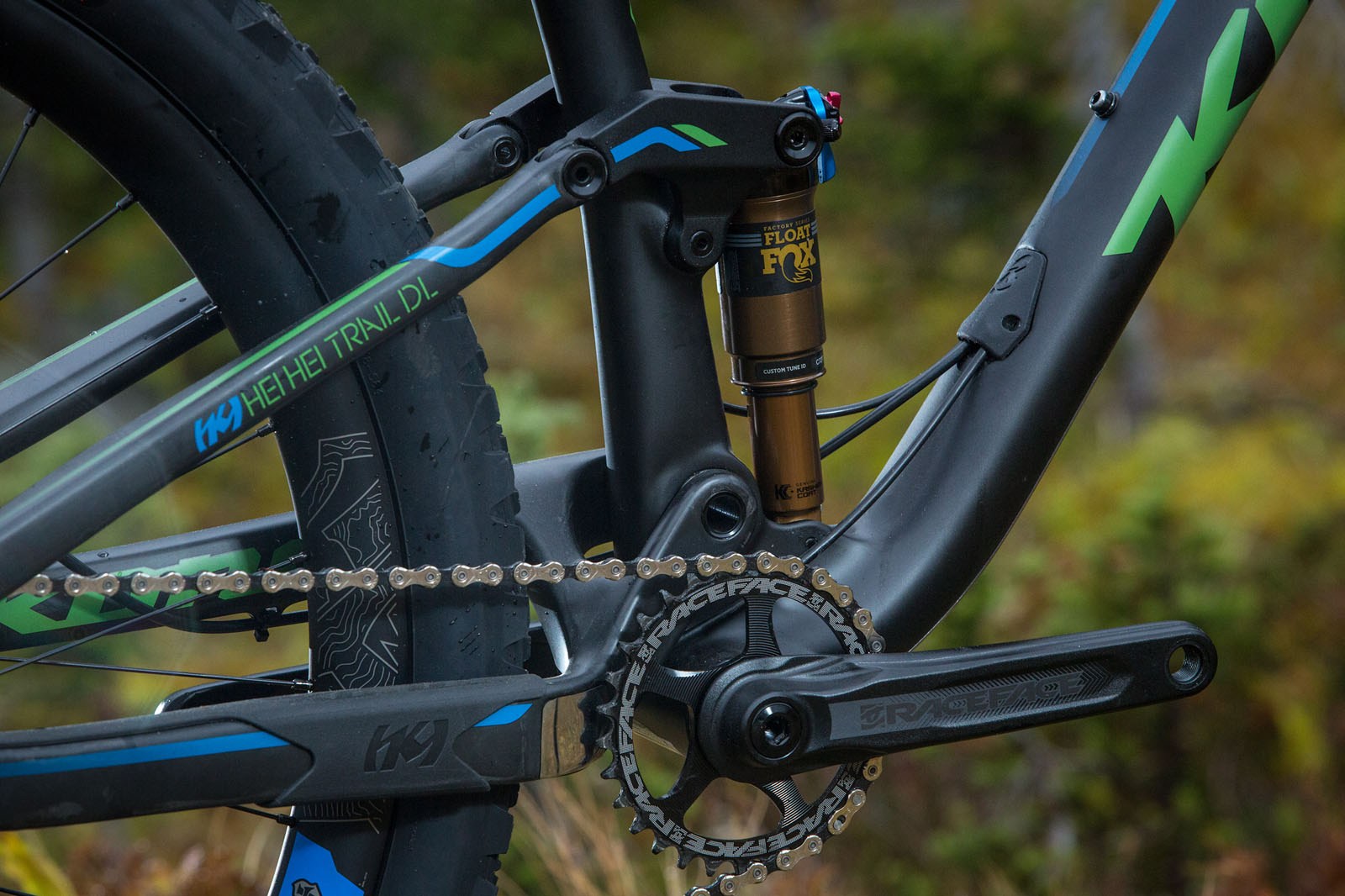 Kona has developed a clever internal cable routing system which allows for routing the rear brake down either side of the bike, a nice feature for those that run their brakes backwards. The ports for the internal routing are designed so the rear brake can be removed from the bike without having to cut the brake line, YAY, thank you Kona. 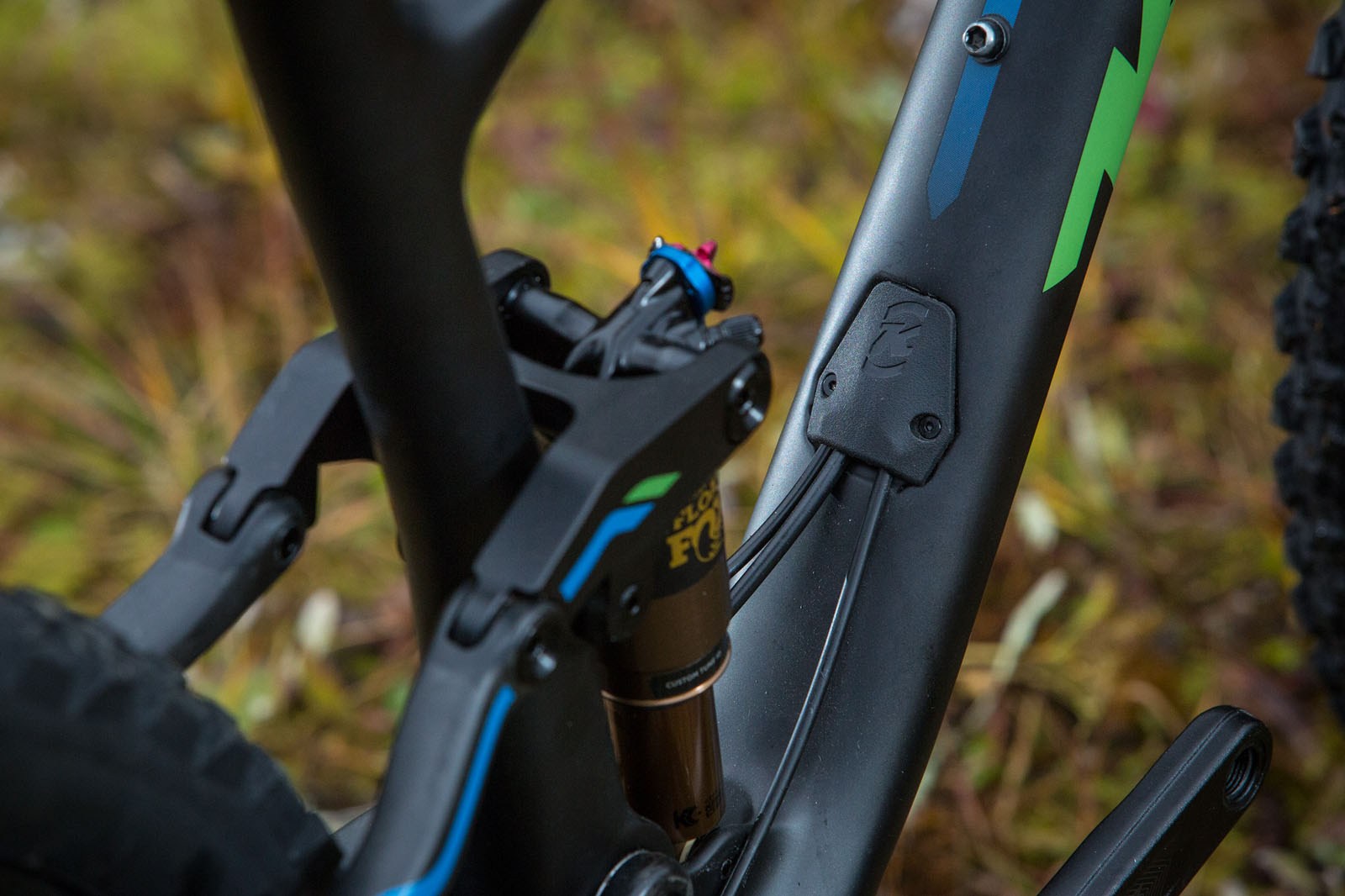 This large pocket allows for rear brake removal without having to cut the line, and also houses a spare derailleur hanger. Very handy.

Build wise the Hei Hei Trail comes in three flavours – Regular, DL and Supreme – that retail for $5,599, $7,999 and $10,499 CDN respectively. The frames are identical except for colour, with all three bikes looking sharp in the flesh. 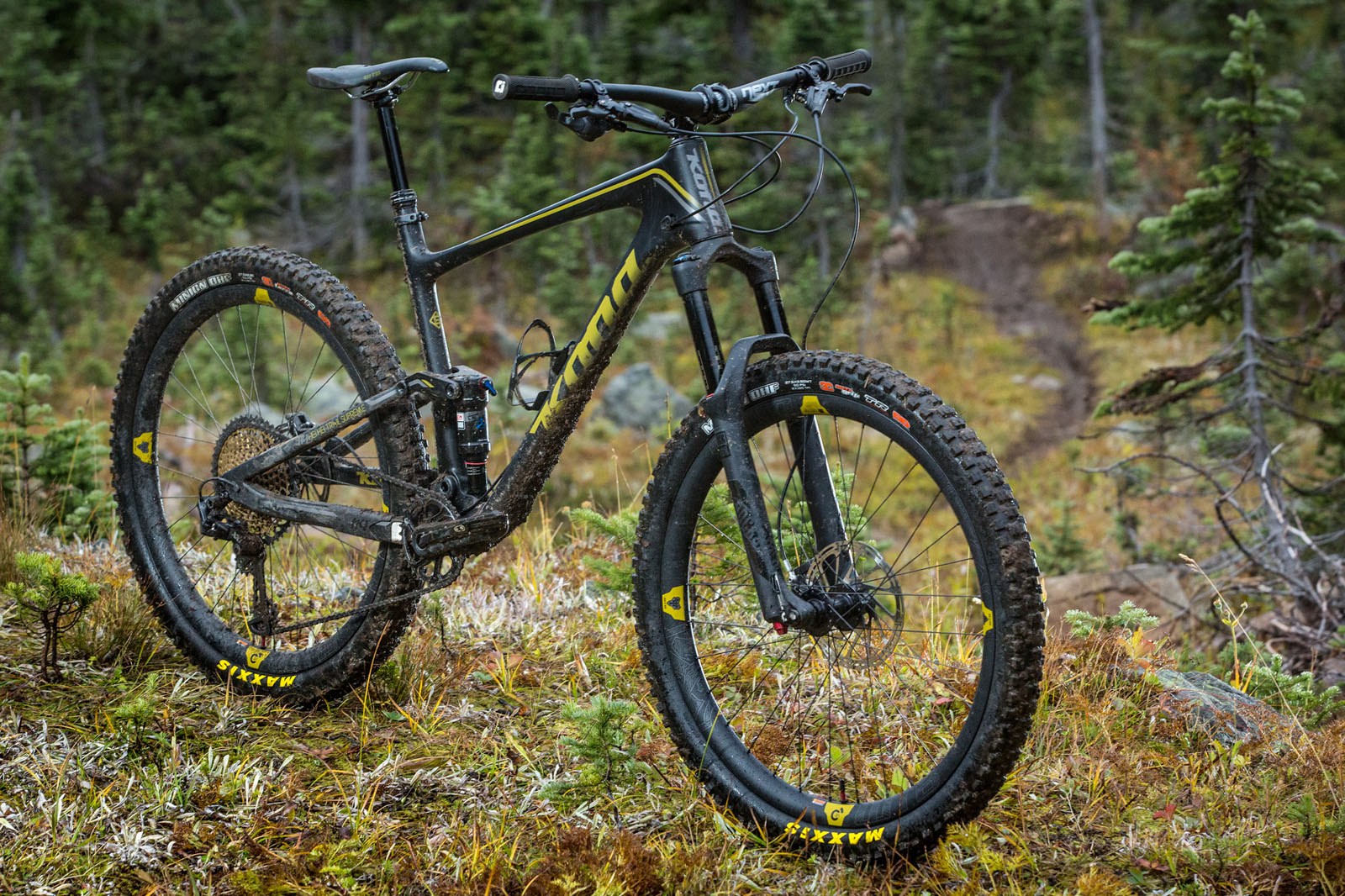 I was given the mid spec Hei Hei Trail DL in size Large to smash. Stoked. 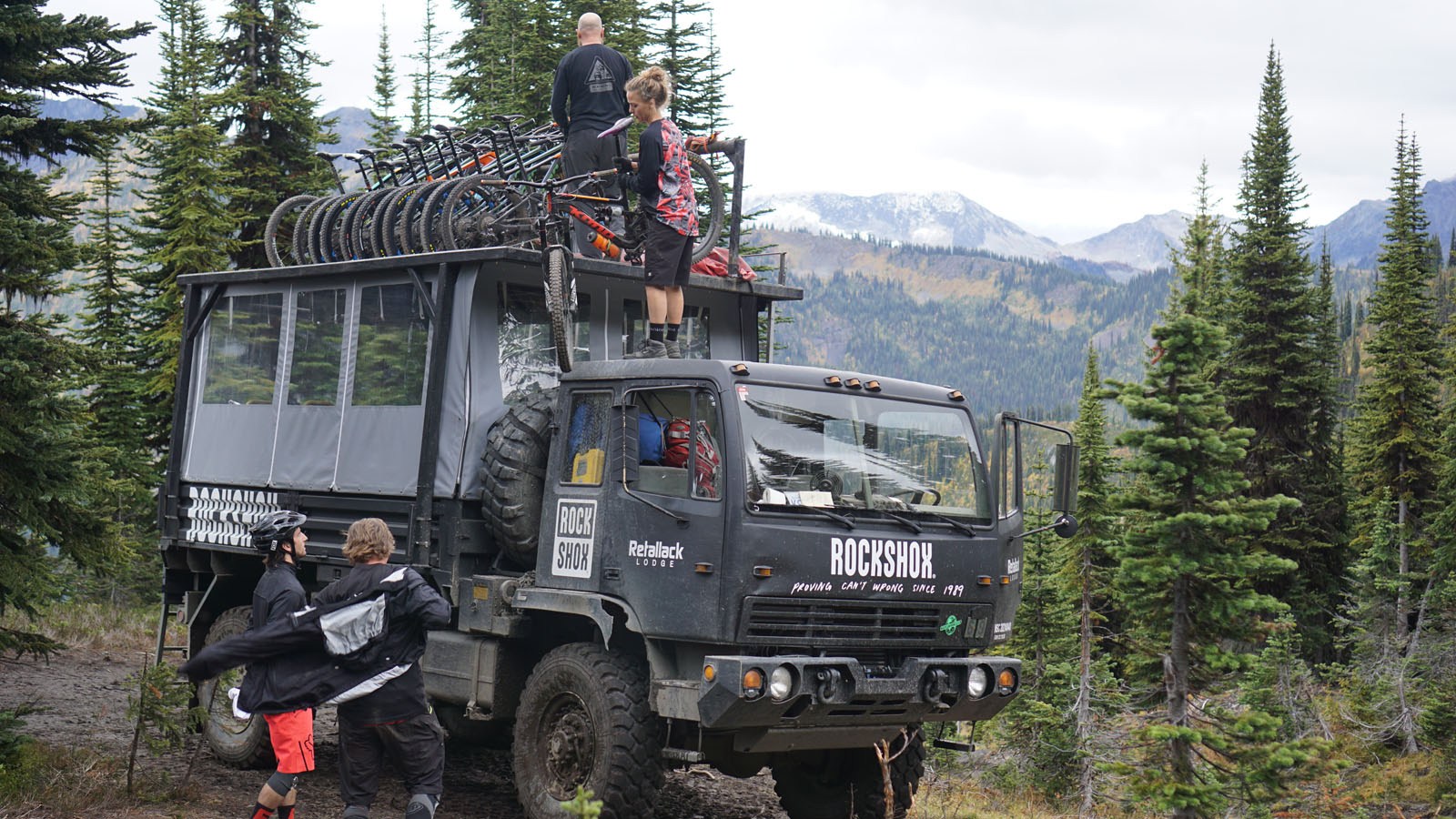 We were shuttled in the War Machine as far up the mountain as possible, to roughly 2,100 m above sea level. Photo – Tim Coleman

From there we pedaled and hiked up the trail for about 4 km to an elevation of 2,500 m, the peak of Reco Mountain. 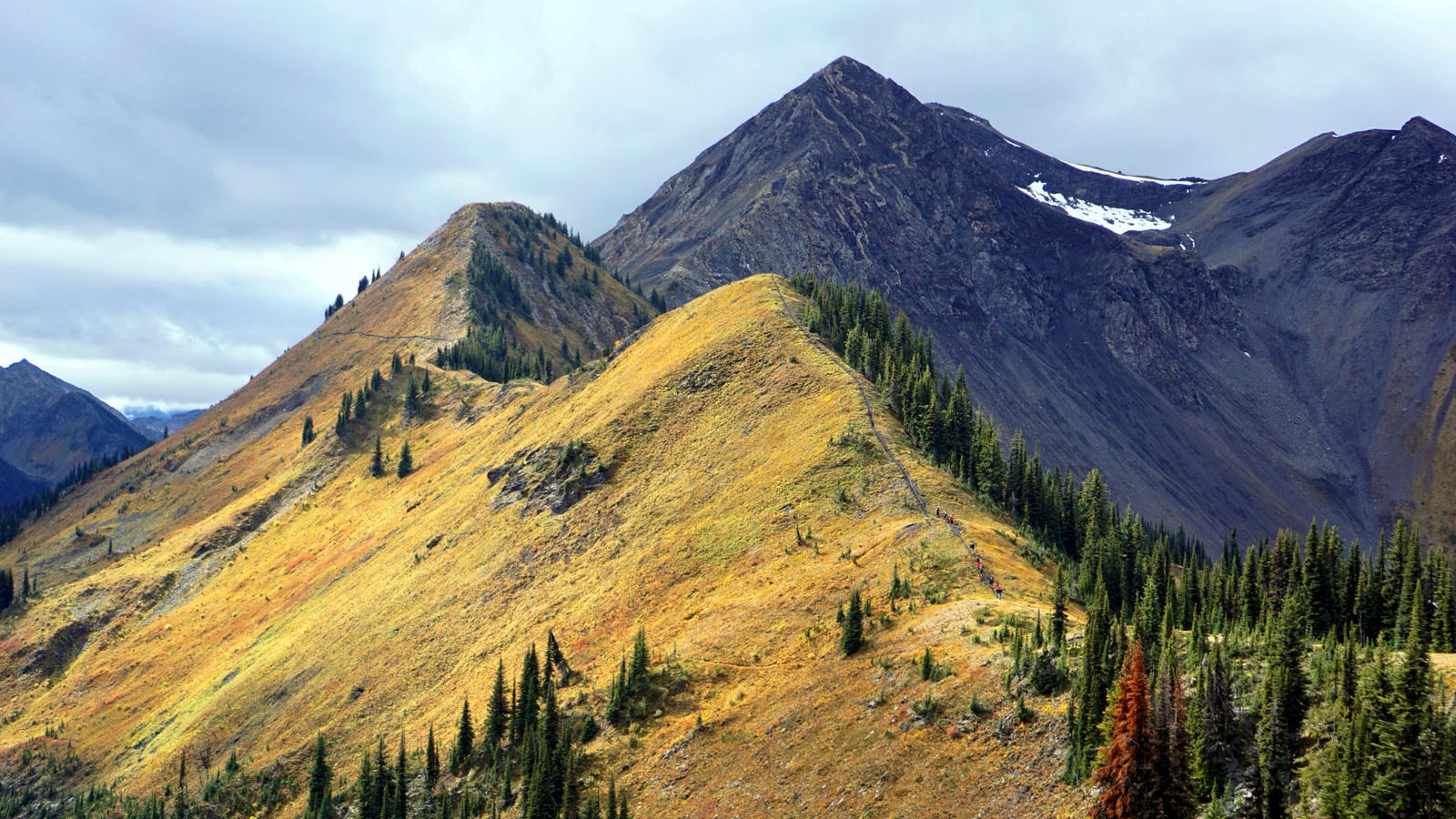 The trail was steep and loose in spots, and my sea level lungs were struggling with the elevation. Photo – Tim Coleman. 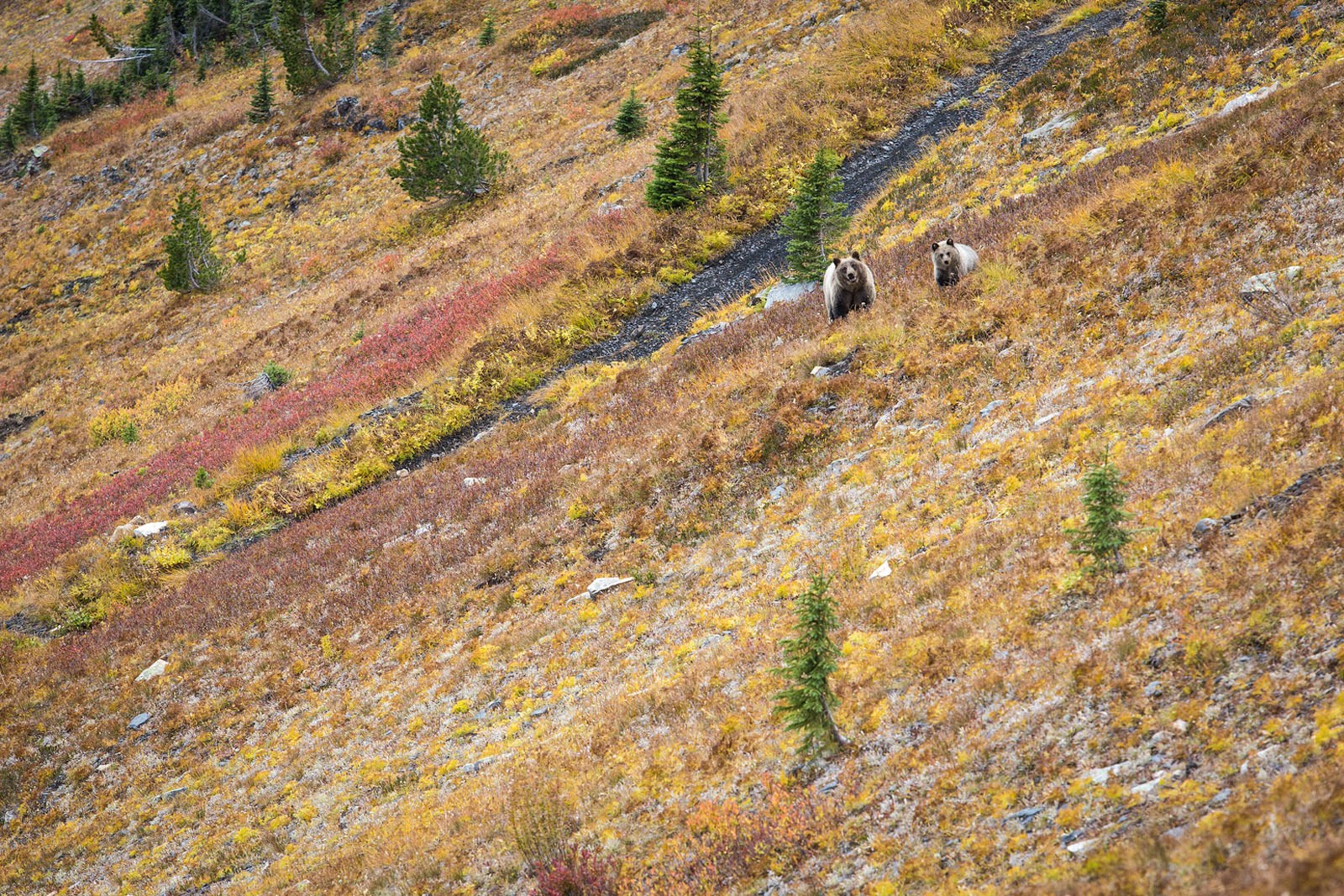 The views were incredible, and we had a minor run-in with a grizzly mum and cub.

I had a couple of Code Brown moments, but quickly adapted to the quicker handling of the Hei Hei Trail.

The ascent helped us get a feel for the Hei Hei Trail’s climbing prowess. It pedaled well in the shock’s Open setting, but did benefit from using Trail mode to firm up the rear end. I thought the climbing position on the bike was comfortable and it pedaled with relative ease. The climb was tough going though, and there were sections we were all hiking. 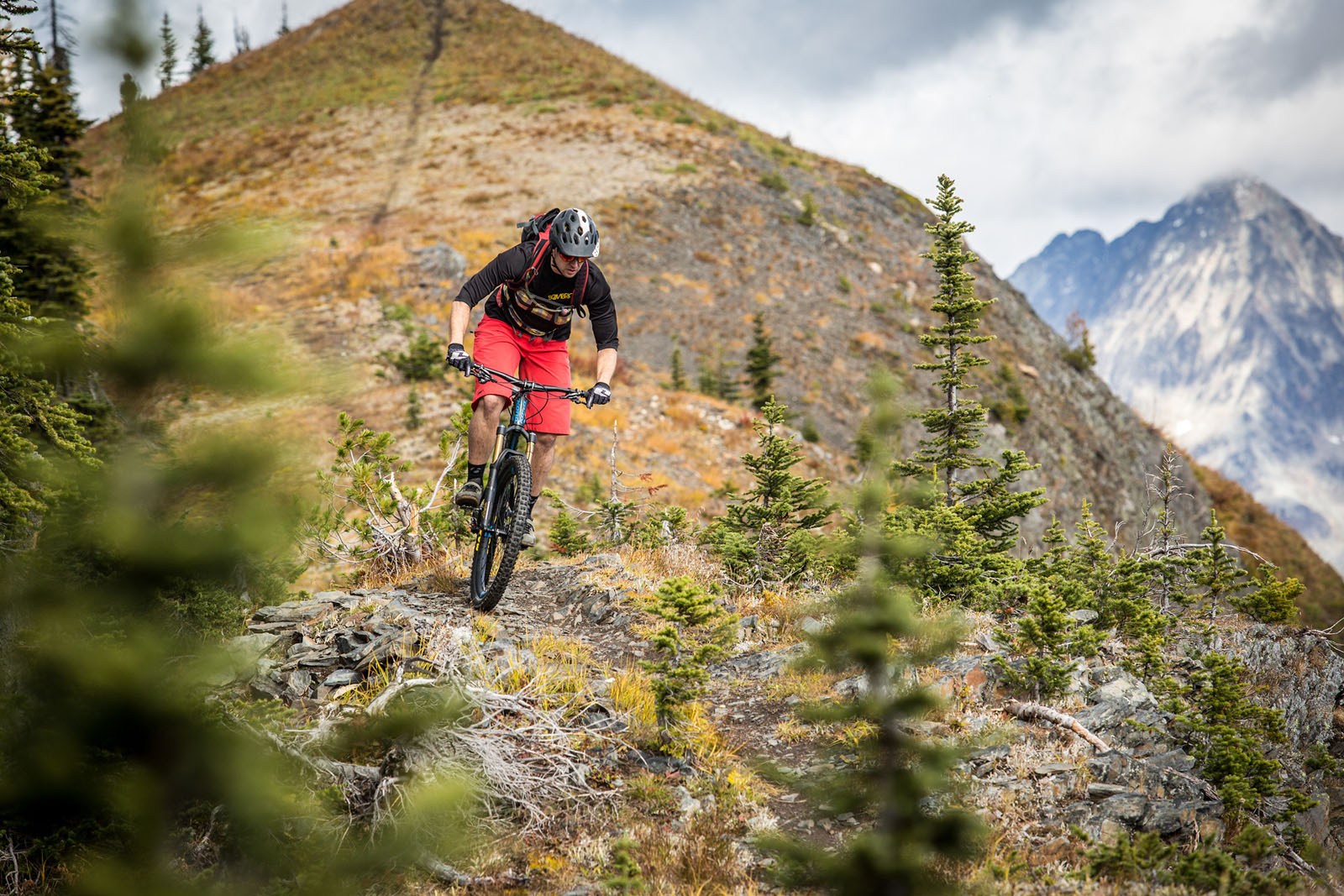 Almost at the top.

We started down Reco Mountain on what is a fantastic 14 km descent back to Retallack Lodge. At first, the trail is fast, bench cut single track that is never straight. It’s made to be fun and undulating. The head angle on the Hei Hei is a bit steeper than I’m used to riding, and initially, I found myself oversteering while traveling at a rather high rate of speed. I had a couple of Code Brown moments but quickly adapted to the quicker handling of the Hei Hei Trail. 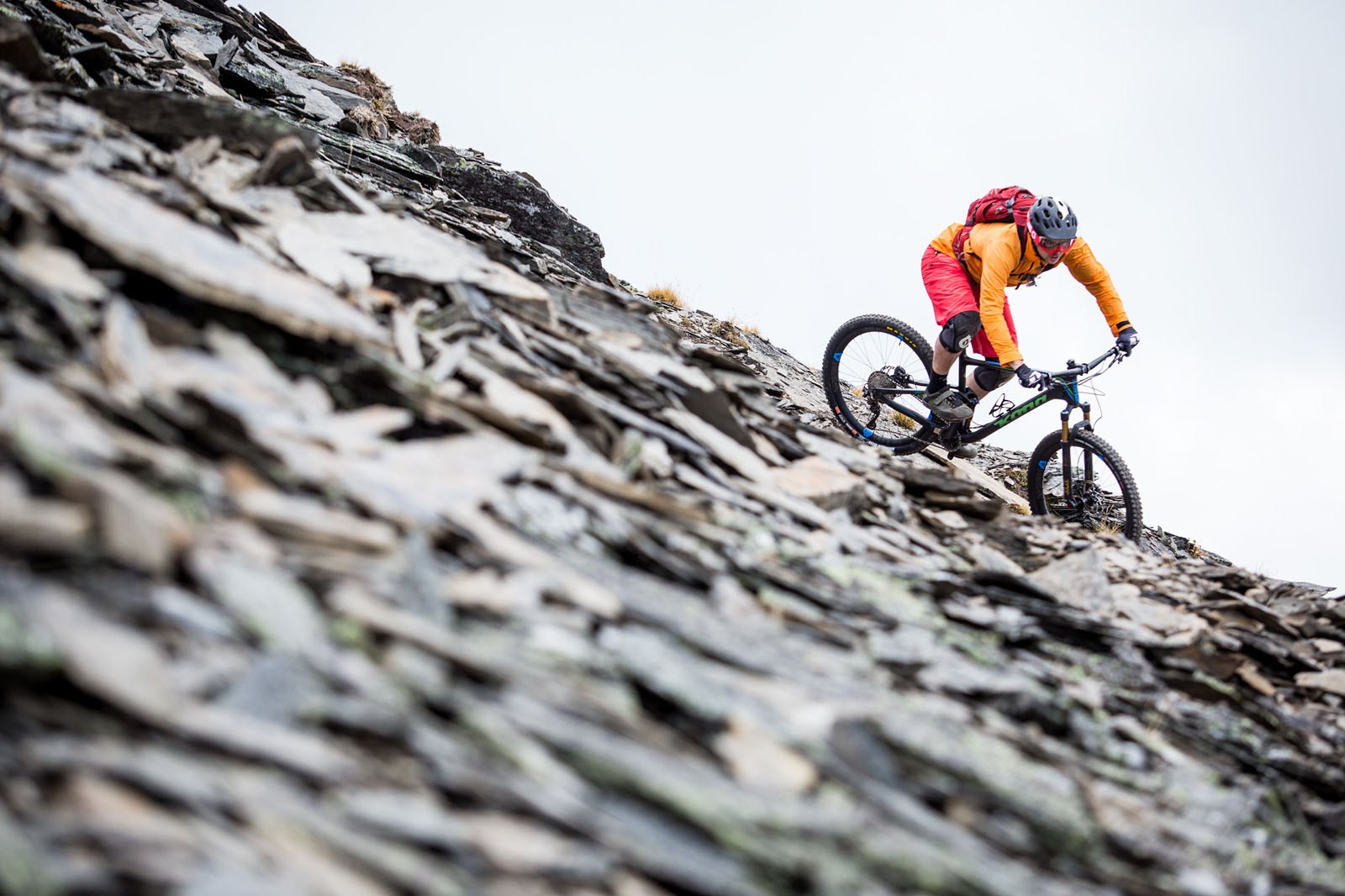 Rock and shale abound in the Alpine at Retallack. An unforgiving place to go down. I figured I’d take it easy on a shorter travel bike than I’m normally used to. That plan lasted about 3 seconds.

After a couple of minutes, I was slashing corners and jumping through sections with ease. I was initially very impressed with how well the rear suspension worked. The higher pivot location made the Hei Hei easier over square bumps than other bikes I’ve ridden with 140 mm travel. The combination of the air can Kona selected on the shock and the frame’s progressivity resulted in good bump compliance around sag, but felt supportive and almost bottomless under bigger compressions. 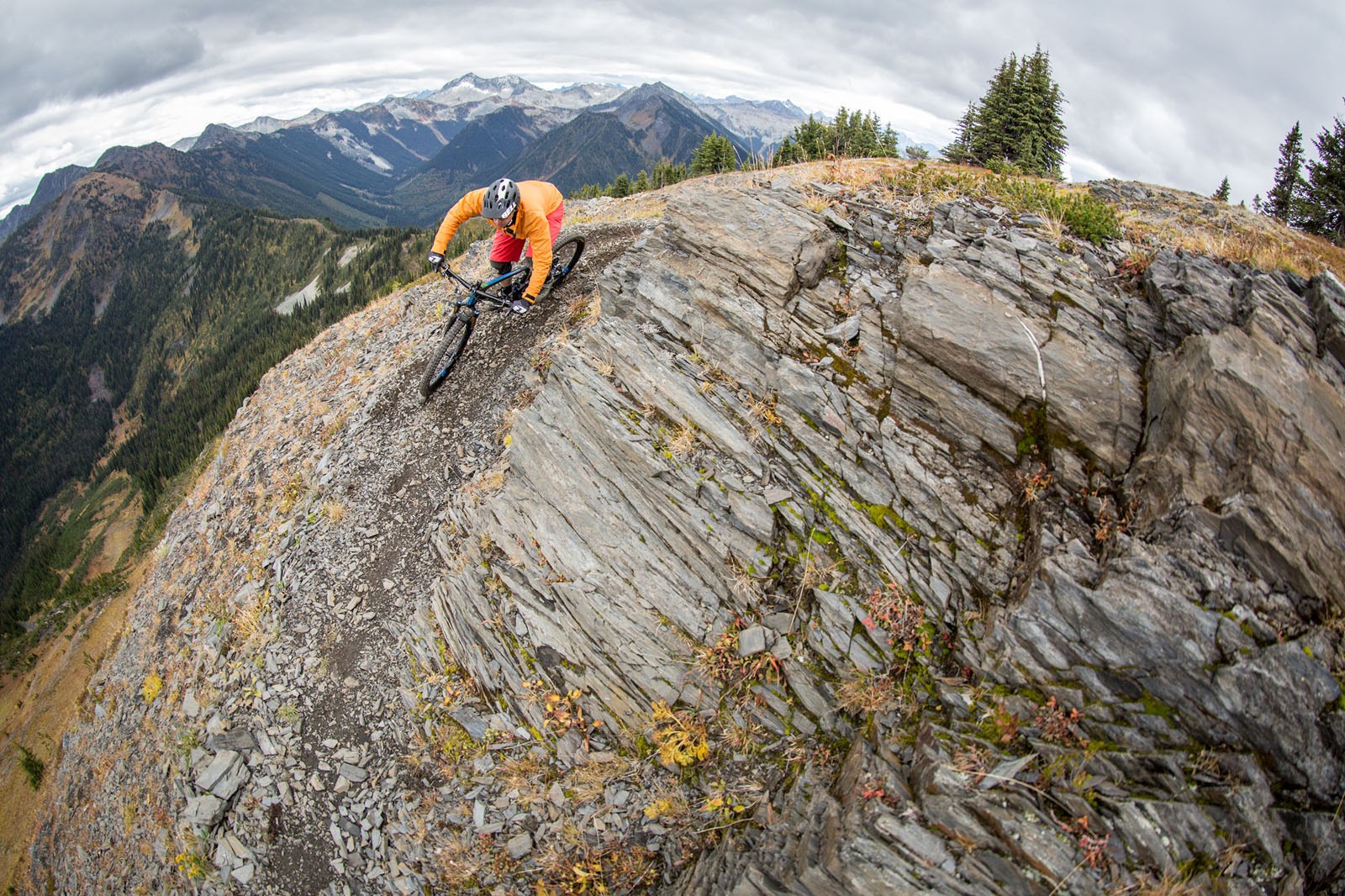 I found it hard to keep my eyes on the trail at Retallack. Views for days.

The descent from Reco Mountain has a wide variety of terrain, and the Hei Hei Trail impressed nearly everywhere. I think that’s an admirable feat considering the trails at Retallack are built for shuttle access. Luckily for us, Kona was smart and fitted the Hei Hei Trails with some meatier Maxxis Minion DHFs. When the trail was steep and rougher I did notice some brake force / suspension interaction due to the single pivot layout. While the Hei Hei Trail might not be as neutral under rear braking as some bikes on the market, this certainly wasn’t hugely detrimental. I adapted my braking and if anything it reinforced staying off the brakes in the corners, something we could all do more anyway. 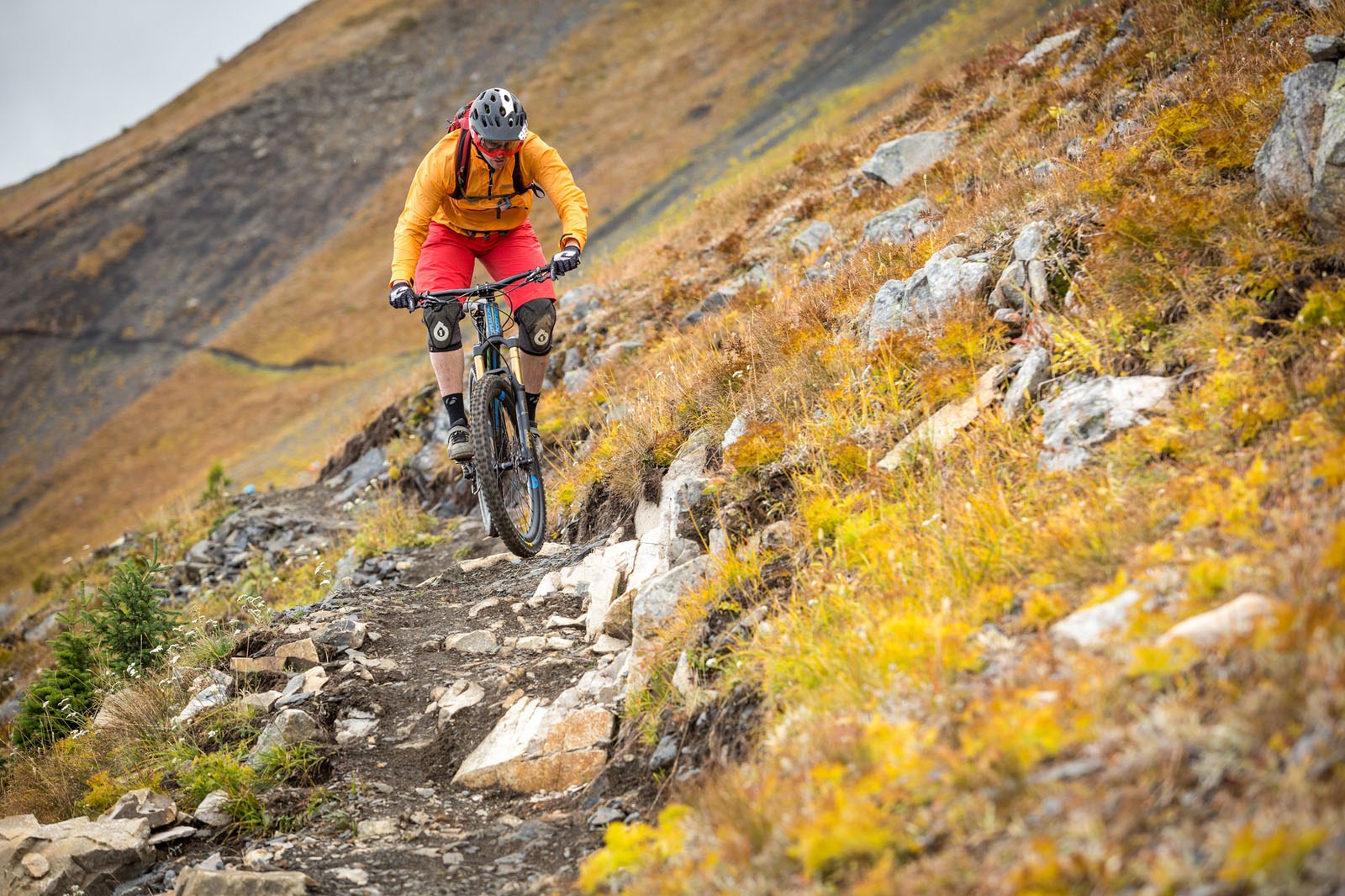 I initially thought the Hei Hei Trail was going to be under gunned for the trails at Retallack. It didn’t take long before I was off the brakes, hauling ass, and attempting to keep up with Connor on his Process.

When the going got rough it was the Fox 34 up front that proved to be the weak point. The back end still felt active and supportive when the fork was buried hard against the bottom out bumper. I felt like the Hei Hei Trail punched outside its weight, and could easily support a more aggressive fork. My only other component complaint was the XT brakes. Both were inconsistent, but the rear brake would regularly pull to the bar. Otherwise, the component build on the mid-spec Kona Hei Hei Trail DL is great. 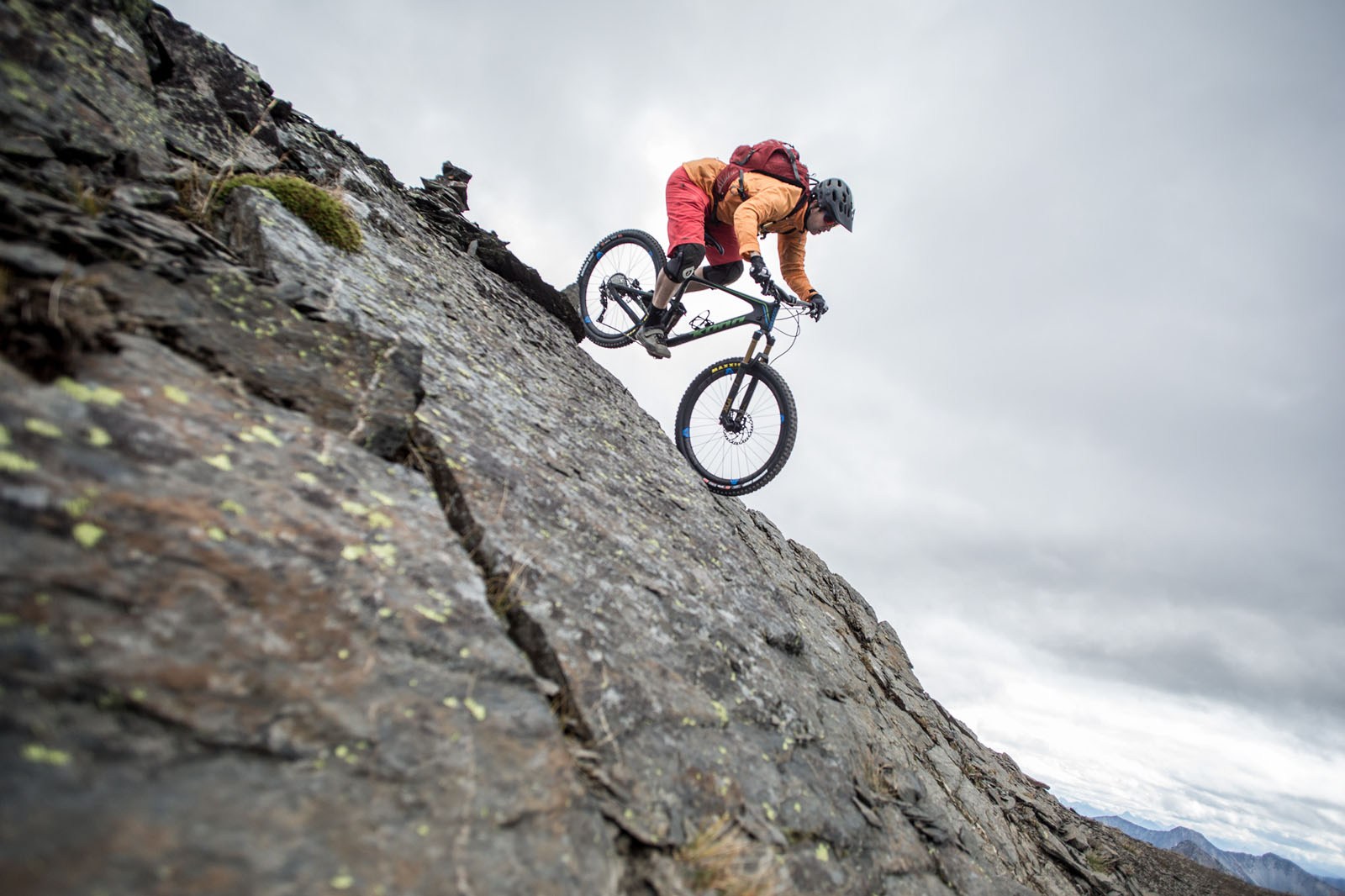 Yeeha, jumping into a rock slab off the peak of Reco Mountain.

The Hei Hei Trail has less travel and is not as aggressive as the bikes I normally ride. I’m always on the hunt for more travel, a longer wheelbase, and coil sprung everything. In many ways, the Hei Hei Trail is the antithesis of the bikes I gravitate towards. I wasn’t expecting to enjoy the rowdy Retallack trails on a pinner trail bike. I was very wrong. 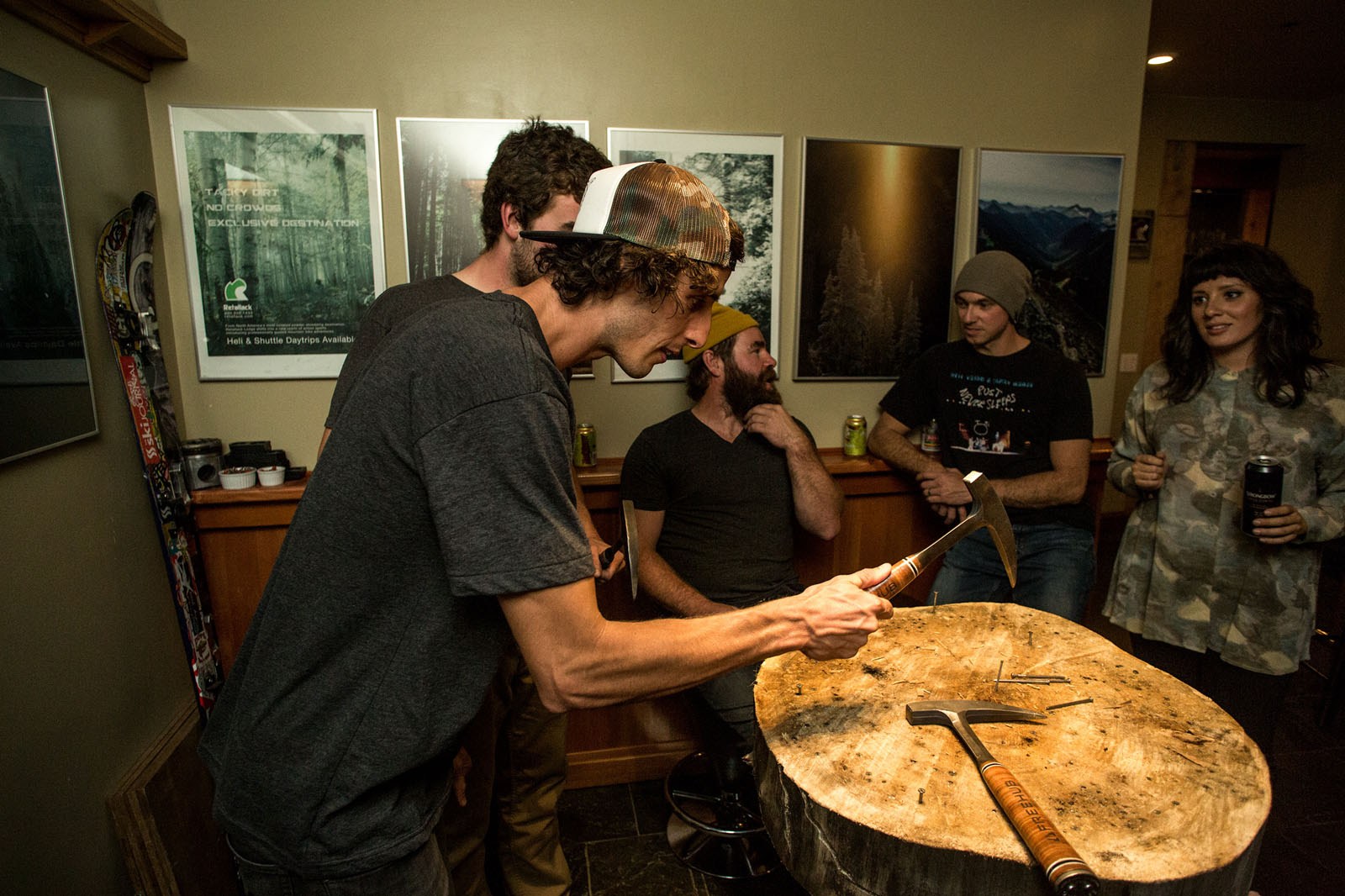 The après at Retallack is almost as good as the riding. If you haven’t been to Retallack before, put it high up on your To Do list for 2017, you’ll be glad you did.

After getting used to the quicker handling of the Kona Hei Hei Trail I was surprised at how supple and forgiving the rear suspension was. It didn’t come as a surprise that the Hei Hei Trail was fast and snappy on the pedals, and it climbed up technical pitches with relative ease. Once I started really pushing the Hei Hei Trail it was evident the 34 up front wasn’t quite as willing as the back end. 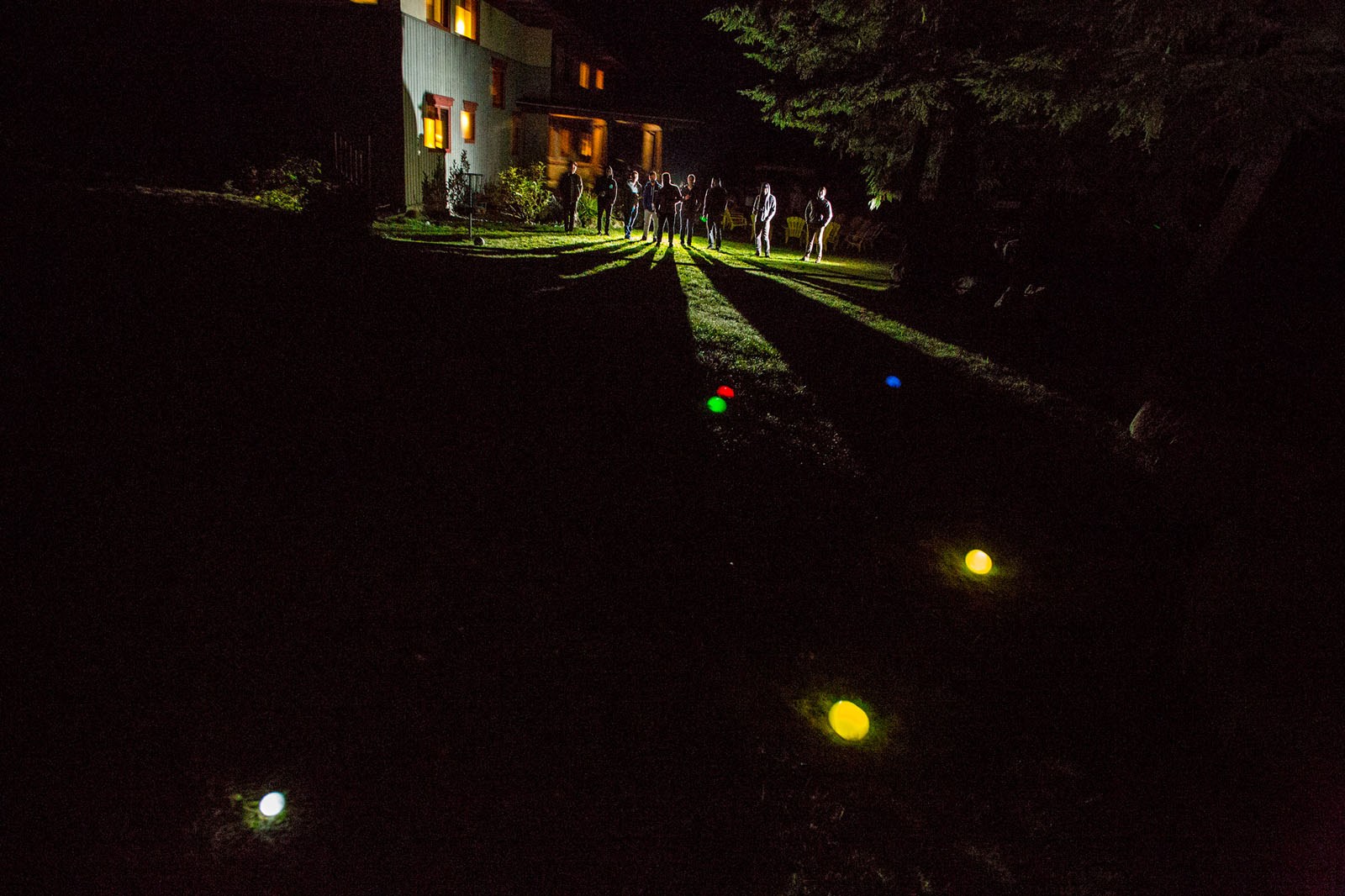 Similar to the Operator we rode on day 1, a day’s riding isn’t enough time to develop an in-depth review or comment on durability. But given that one day, I can say that I thoroughly enjoyed riding the Hei Hei Trail well outside its intended use chart. I’d love to try the Hei Hei Trail again, in a larger size, with a slightly more aggressive fork. In that guise, I think it would make an excellent do-all trail bike. In short, the Hei Hei Trail is a bit like a mullet, some business in the front, heaps of party in the back.

Did you notice any ride characteristics you would attribute to the flexing seatstay design?

We only had the one day on the Hei Hei Trail, but we rode some chunky trail for a trail bike. I personally didn't notice any ride characteristics from any flex in the rear end. It certainly isn't the stiffest rear end I've ever ridden, but I didn't notice the back end flopping about, or squirming in corners.

Thanks Tim. I'm more asking about the fact that the rear suspension design relies on the seatstay flexing rather than having a traditional bearing or bushing pivot. It's not a design you see on many bikes, and I'm wondering if it has any noticeable drawbacks. But by the fact that you didn't comment on it, I'll take that as a no.

No problem. Good point regarding the Flex stays. Kona had mentioned the flex stays, and I forgot to include any mention in the article. While I didn't take particular notice of the rear end flex, overall I was impressed by the back end of the bike out on the trail.

I know it's been almost four years, and I hope you're still here...

what did you think about the 30t chainring? was it enough for you? I just bought it, and I love this bike. the chainring is the main downside for me, at least for xc riding. I'm considering changing it to 32, or even 34t.