And just like that World Championships are done, ending the top level DH season for 2016. The year will be looked back upon as the end of an era. It’s not news that Steve Peat is retiring from competition, but a shocker began to bubble up at last week’s race from Andorra. It turns out that Josh Bryceland really has decided to stop competing. Claudio Caluori related that Josh wasn’t happy with the carbon footprint he’s leaving. 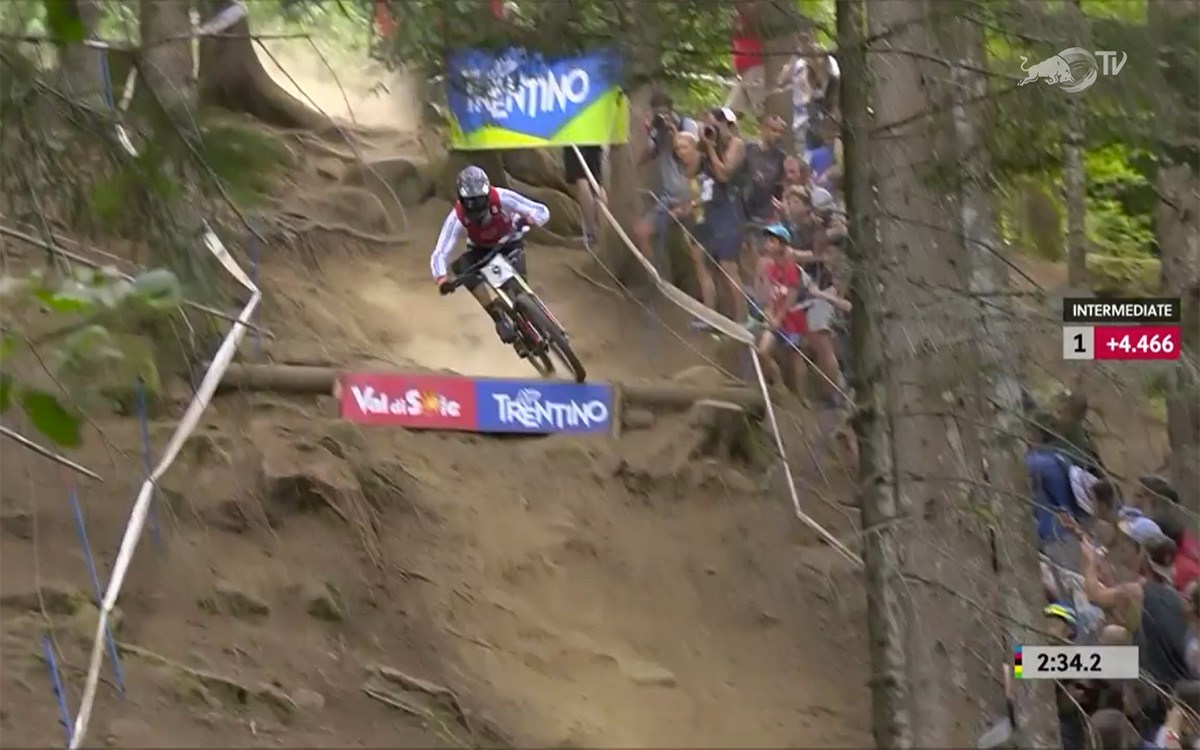 Say it isn’t so Ratboy! Other riders scrubbed this but nobody else made it looks so tidy.

I guess people closer to Ratboy would know if he’s been an environmentalist for a long time or if this is a new passion for him. The DH circuit will become less interesting, less fun and far less colourful in his absence. With luck he’ll figure out a way to keep racing and satisfy his concerns. 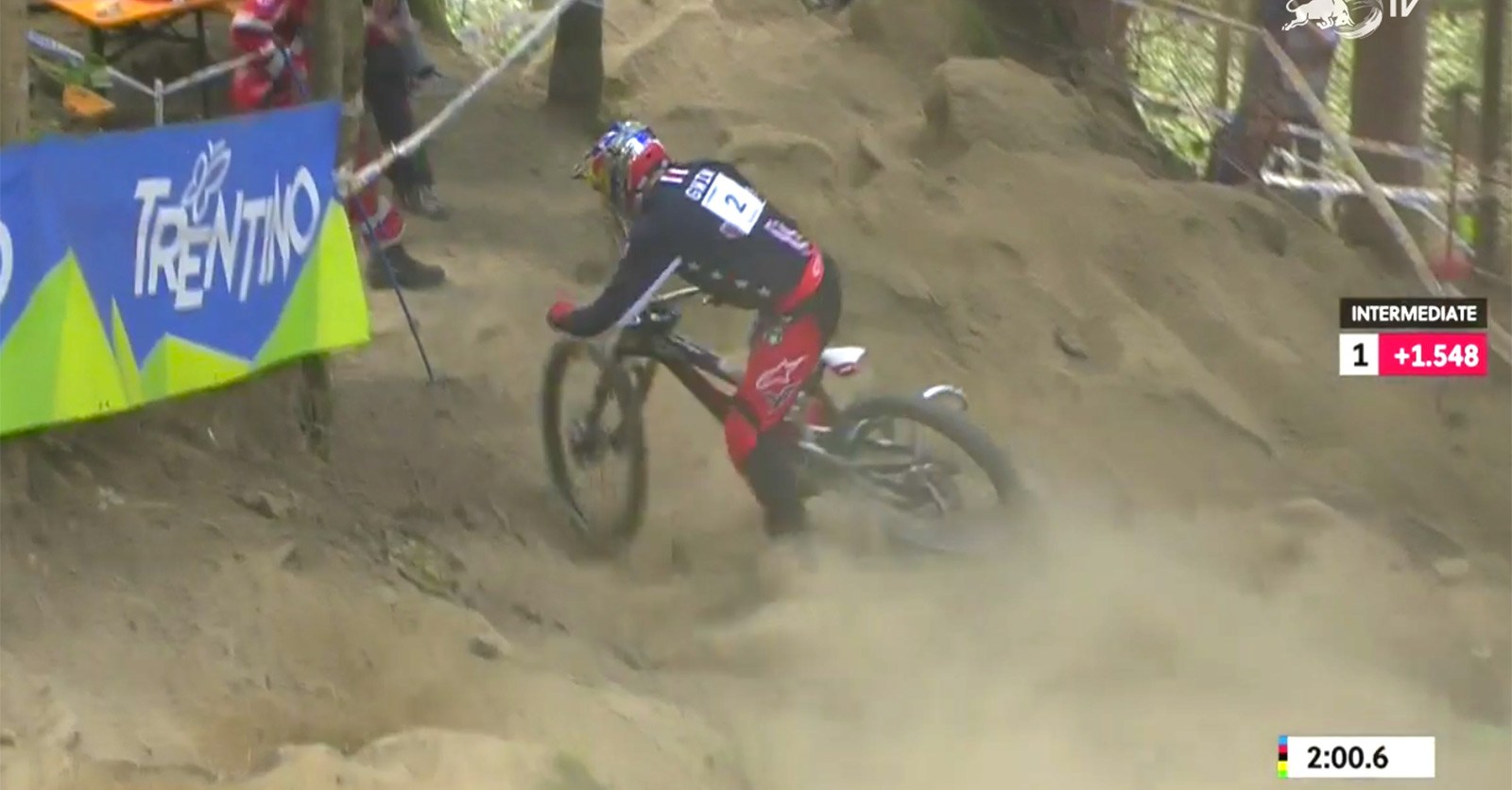 Aaron Gwin seemed to be doing fine when he all of a sudden tossed out an outrigger. It isn’t clear if he was off line and then blew up his tire or he went off line because his tire blew. He may have some ghetto ProCore solution that popped out since he’s not sponsored by Schwalbe and whatever came out wasn’t blue. Aaron did not finish his run as he usually does.

While Aaron Gwin won the overall title, this will be remembered as Danny Hart’s year. Three dominating wins to end the World Cup season and then this. 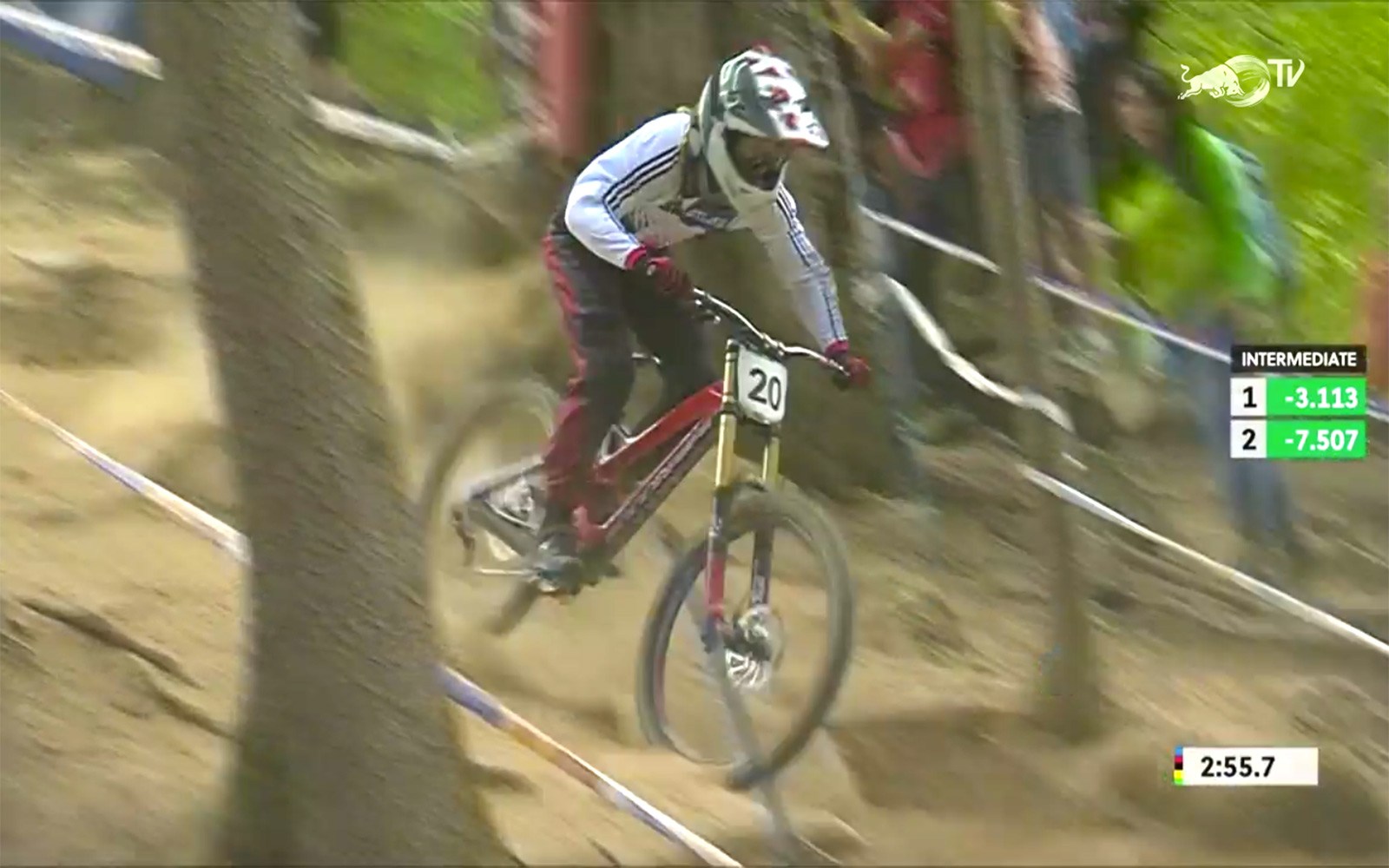 Laurie Greenland sat in the hot seat for a good long time – his hair and his size making him look like an import from Rivendell. In his first season as a senior, Greenland had some impressive results and then threw down a loose and rowdy run that ended up as the second fastest of the day.

Unfortunately the Juniors aren’t broadcasted by Red Bull because it was a banner day for Finn Iles – and for Canada. In his first year of eligibility Finn Iles earned his rainbow stripes. Finn beat fellow Canadian Magnus Manson by almost four seconds. Manson’s performance was impressive on its own because unlike Finn, Magnus hasn’t been racing the full season and gaining experience on the big stage. This bodes incredibly well for Canadian DH and is a testament to the Steve Smith effect. Mark Wallace also posted an impressive result with an 11th place finish. 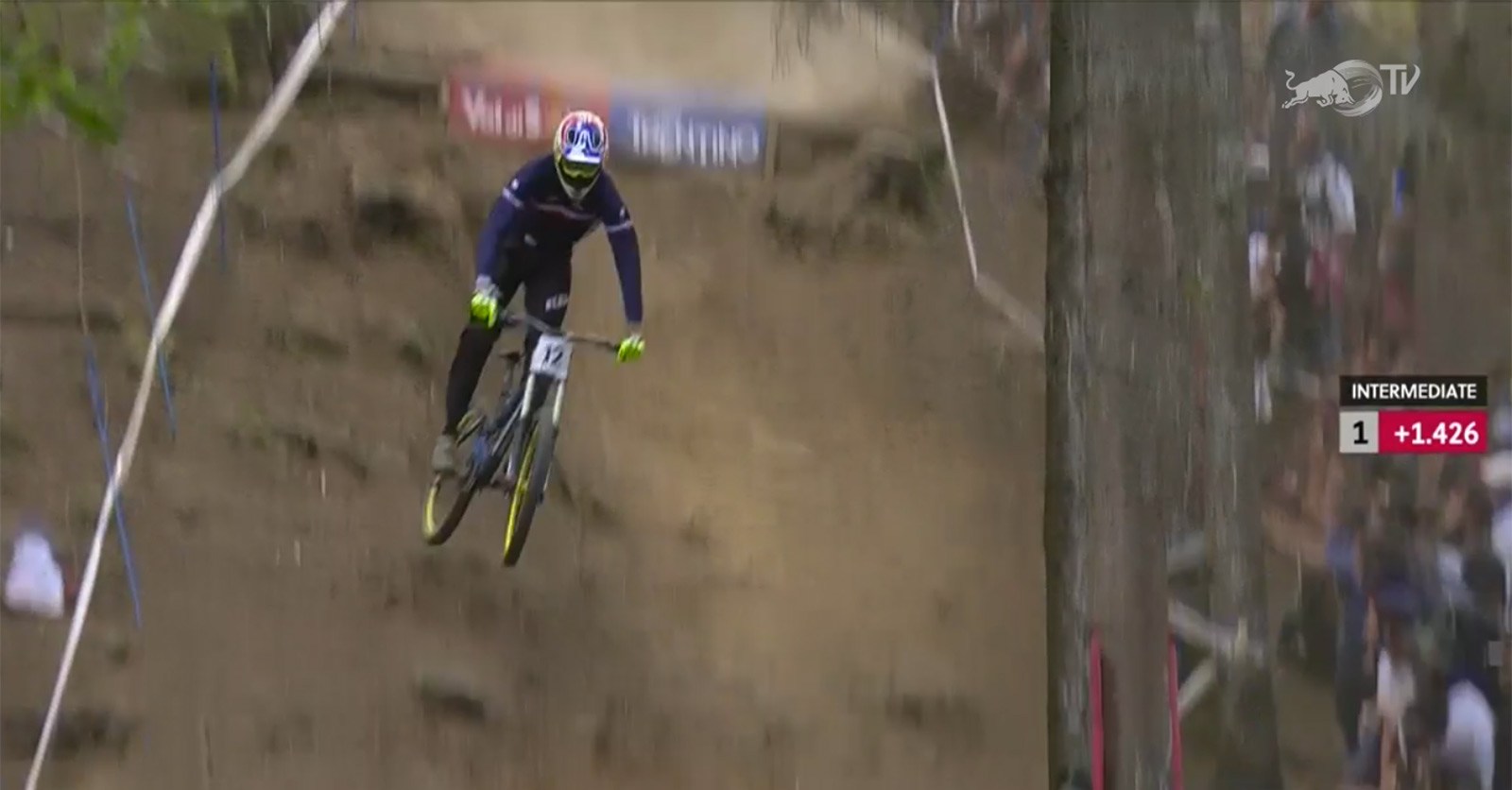 Florent Payet is the tallest man on the circuit and he was the only rider to throw style into this step down – with one exception. Although this grab didn’t quite capture it. He won the bronze on the day with a condident run. 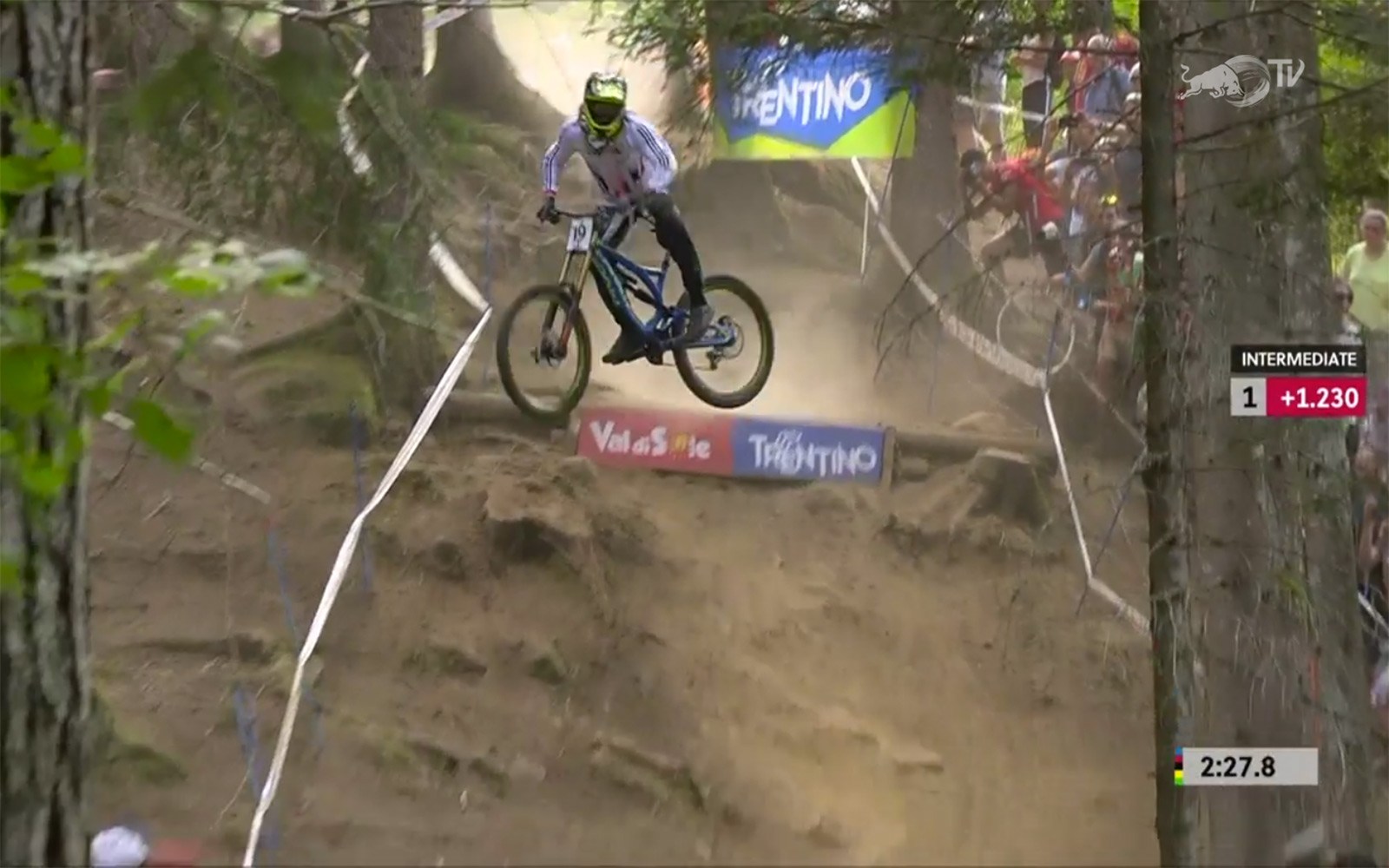 Thanks to the readers who corrected me – I went back and watched Bernard Kerr’s run again. His whip off this treacherous step down was outrageous! 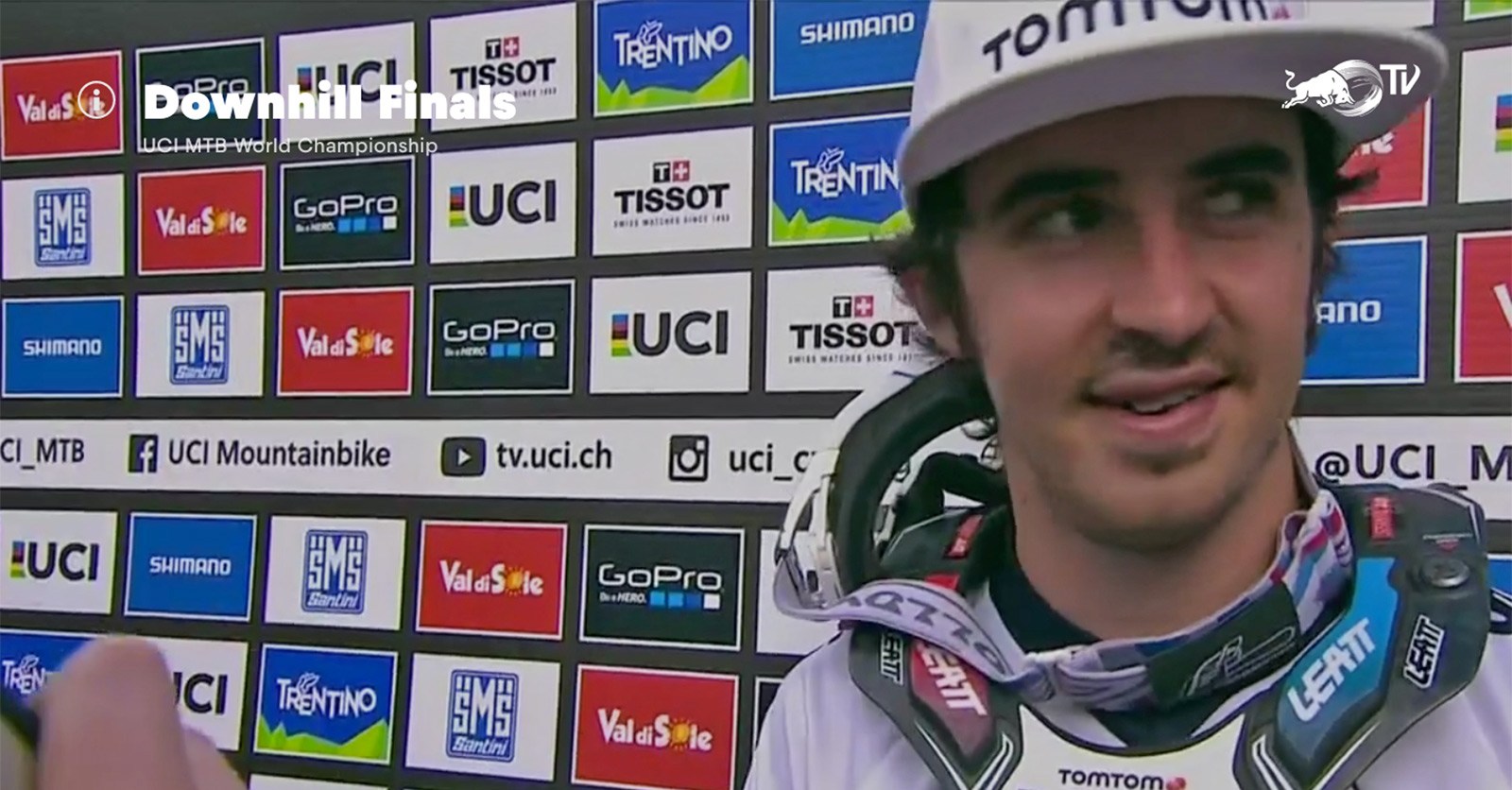 Danny Hart went a little thug life on the podium. “”For all the haters, they can all stick it, saying I’m a one-hit wonder… now so I’ve done it four times in a row. There’s not many people that can say that.” 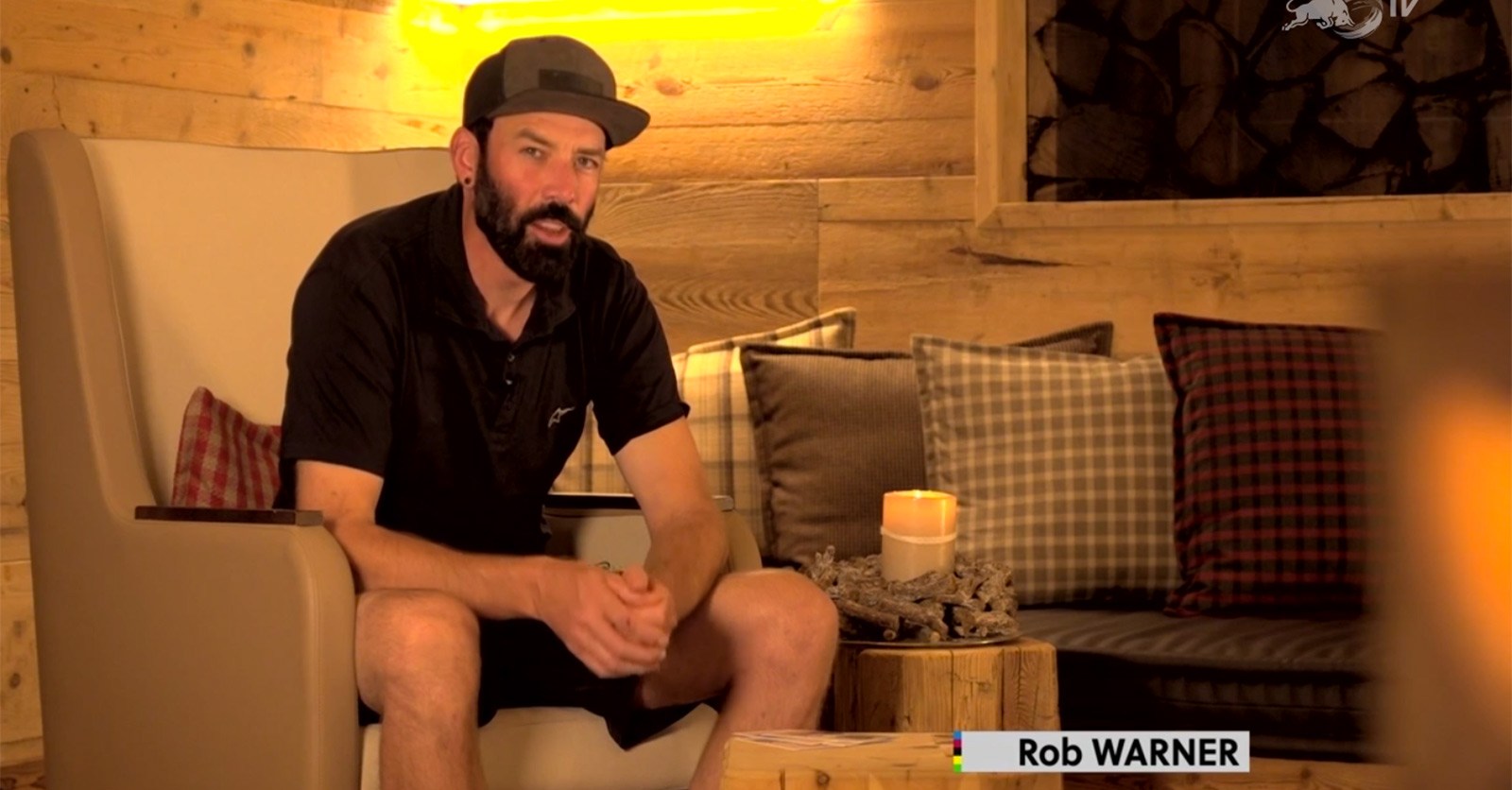 Rob Warner didn’t appear on camera all day. And it seems like the hours at the mic were getting to him when the timing went out when he tossed in some sarcasm, ” We’ve lost the timing.Ideal when you are commentating on a sport that relies on time.” And then he added, “Tissot doing a fantastic job again.” He was likely trying to do some damage control but it didn’t land that way for me after his ideal comment. Most of Warner’s saltiness has been replaced with professionalism but he’s still fun to listen to. 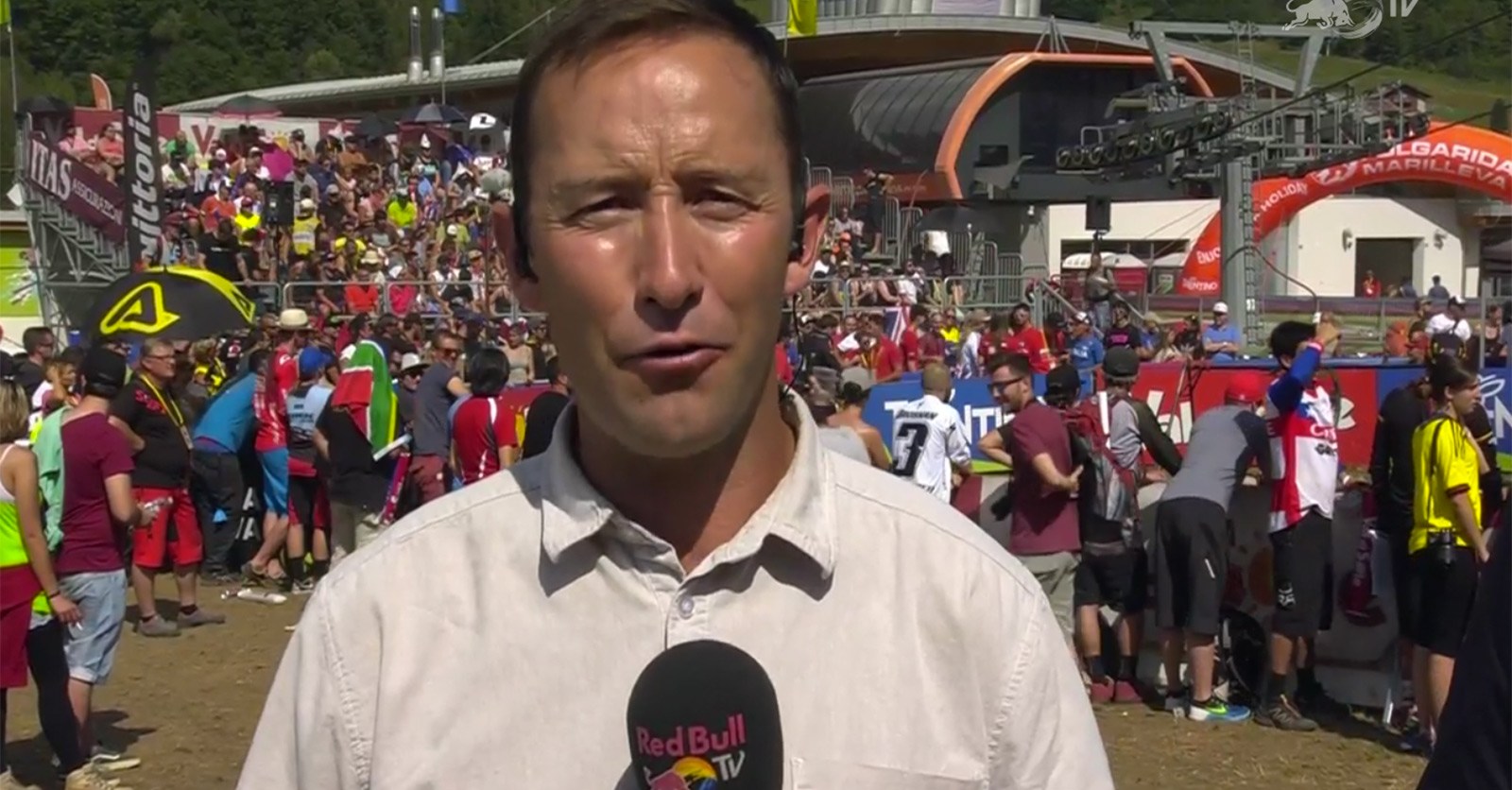 Apparently this is Ed Leigh, but he never told us his name. He did an admirable job standing in for Rob. 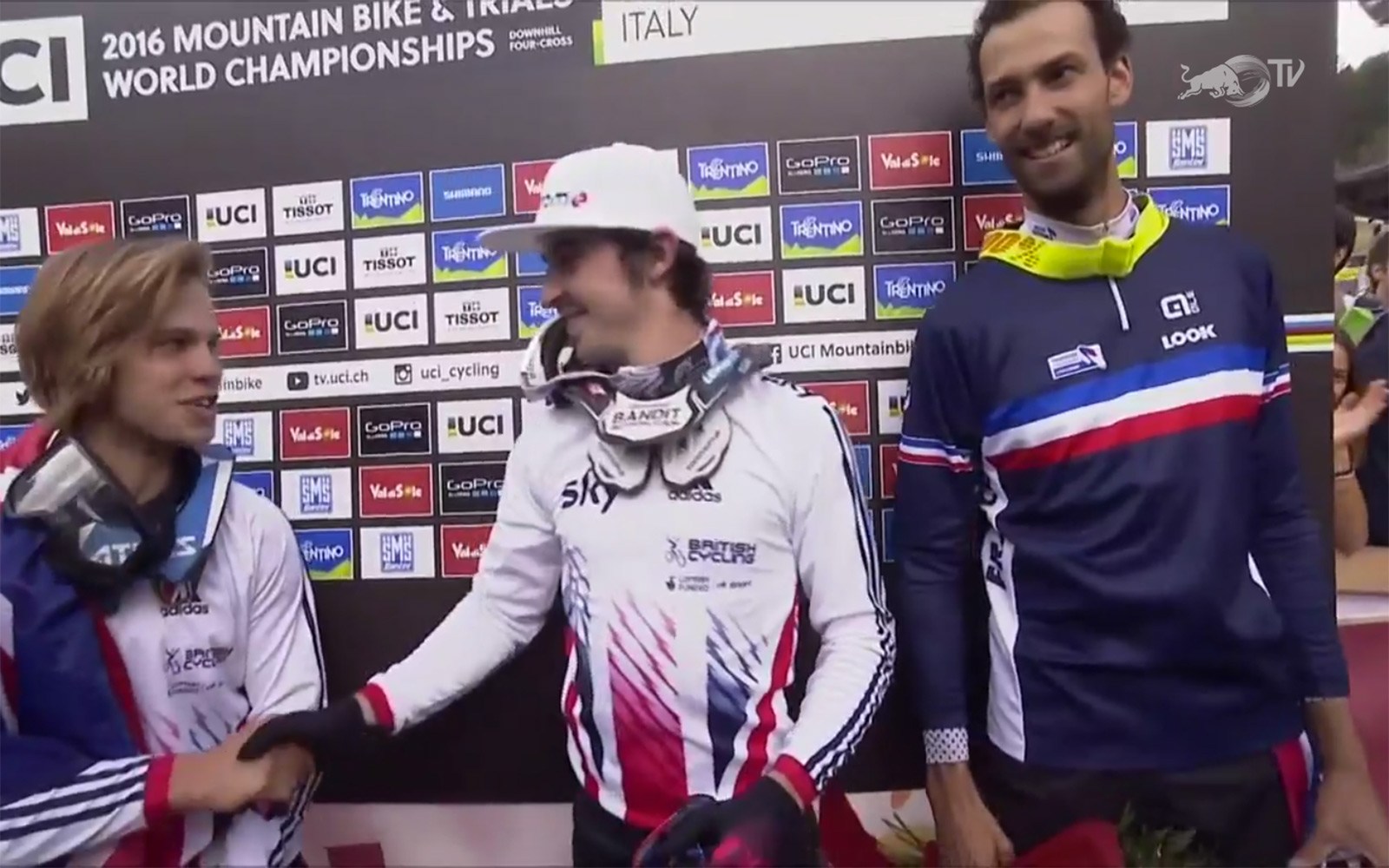 Left to right, the Elf, The Rocket and the Giant – Mondraker owned the podium, shining a spotlight on their radical geometry. 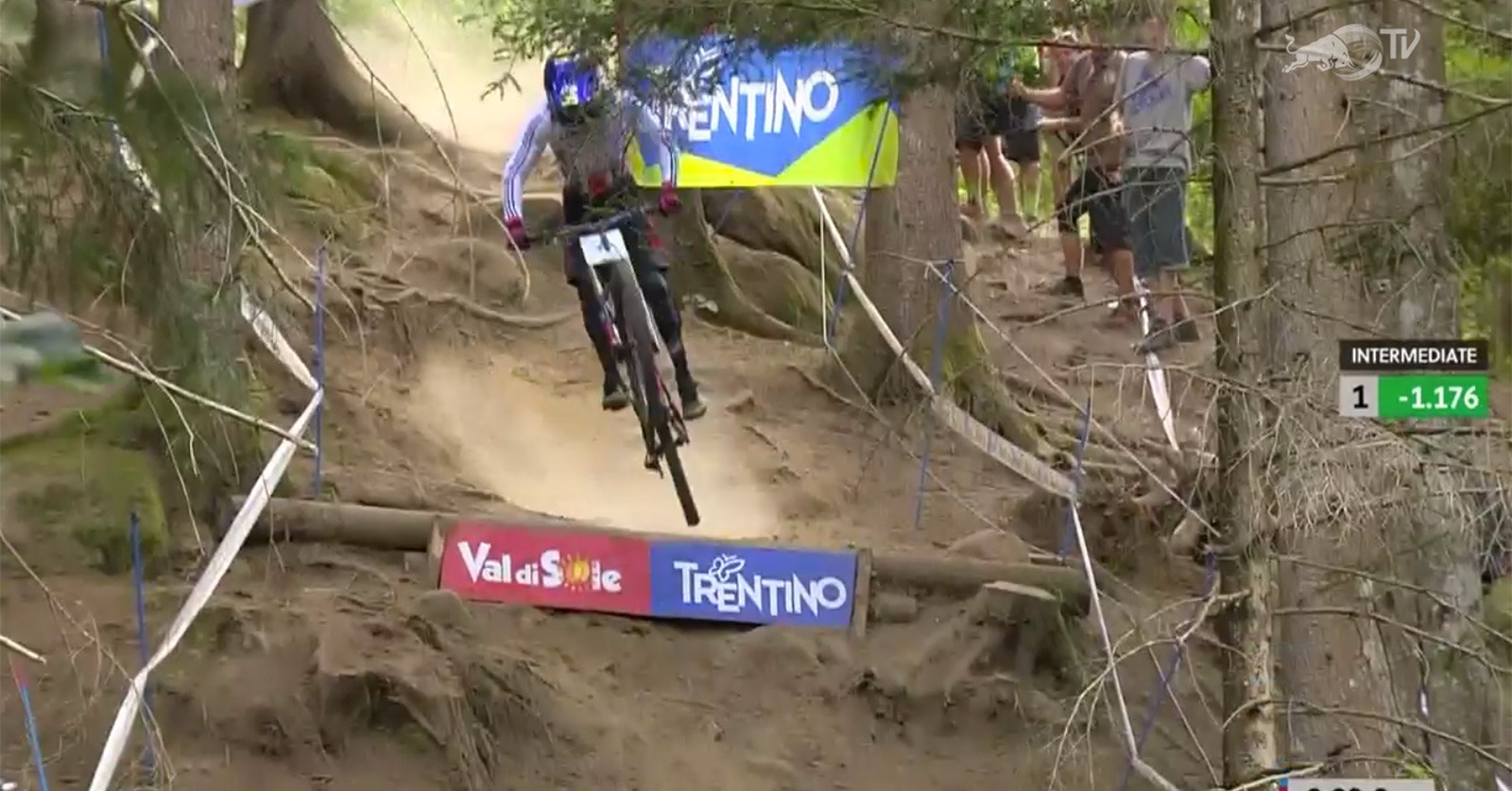 Danny only seems to win in dominant fashion. He won by 3 seconds and put 11 seconds into 10th place finished Jack Moir. 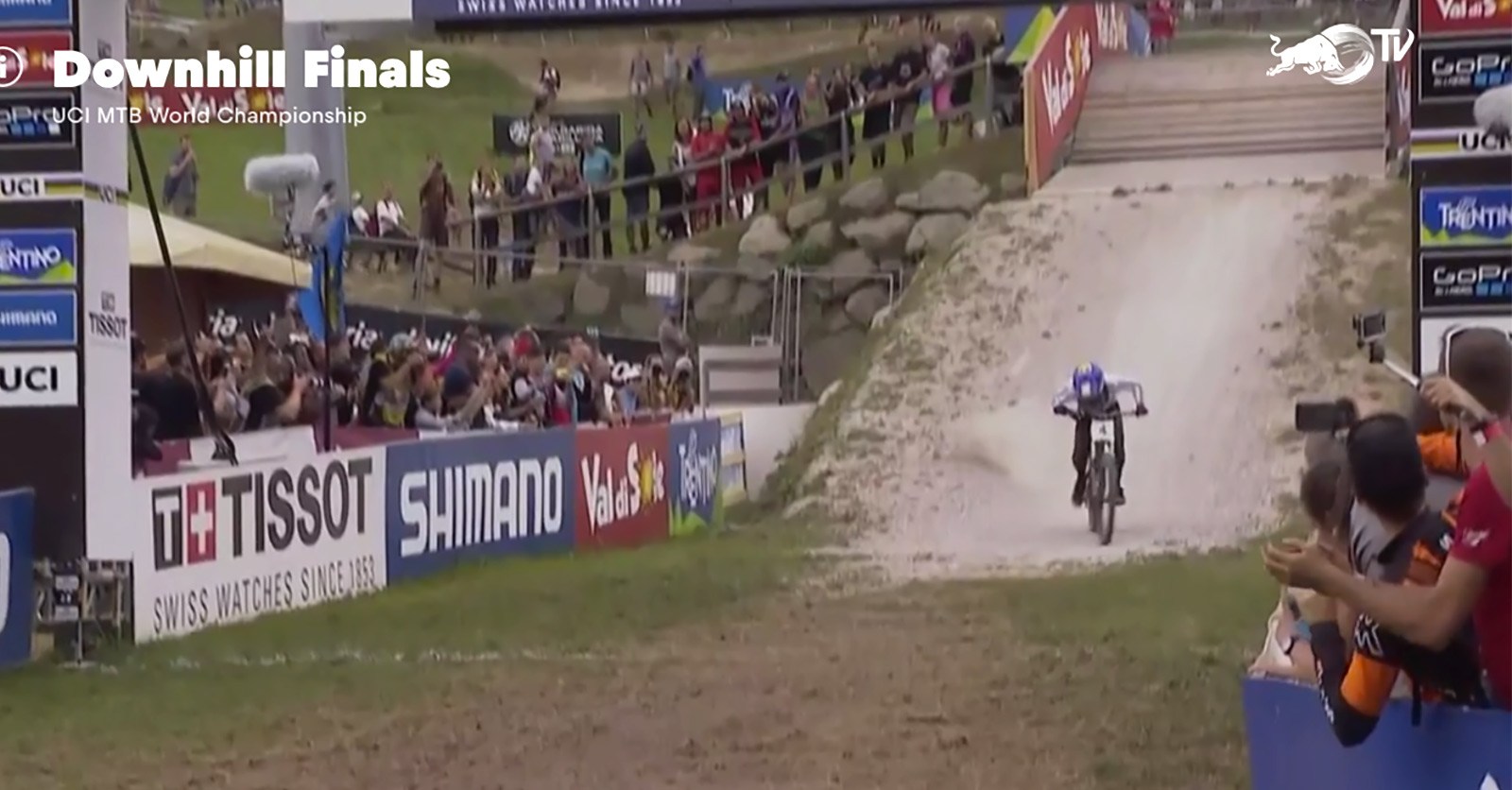 Hart came within a few feet of pulling a Josh Bryceland and flat landing the last jump. It was enough to snap his neck and put him a little off course but he hung on without losing any time. 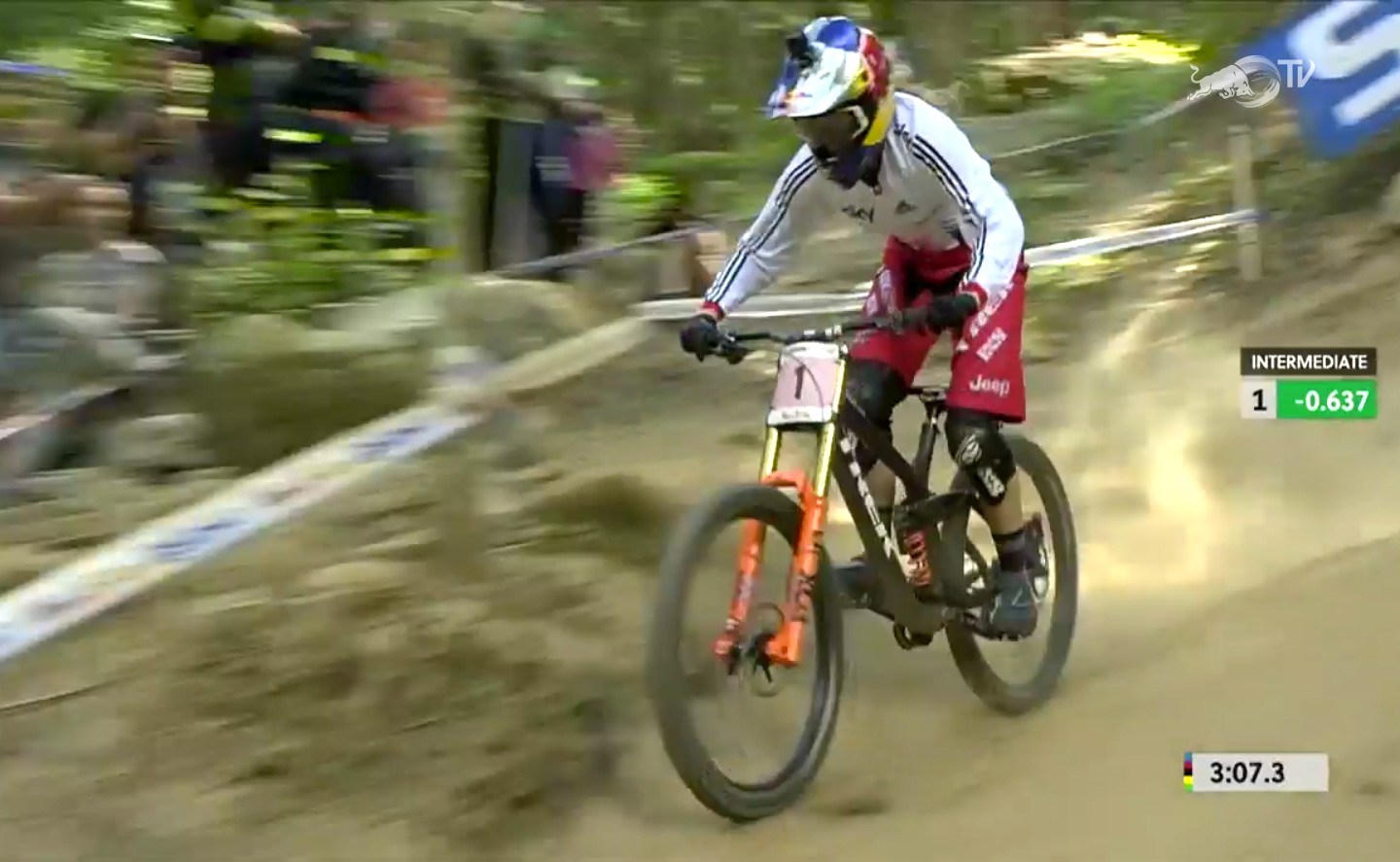 Rachel was only winning by .6 a the first split, but then she started to put time into the field. Her final margin of victory was 3.114 seconds over Myriam Nicole. Her smallest margin of the year that I can recall. If you count last year’s World Champs this is Rachel’s astounding 15th win in a row. 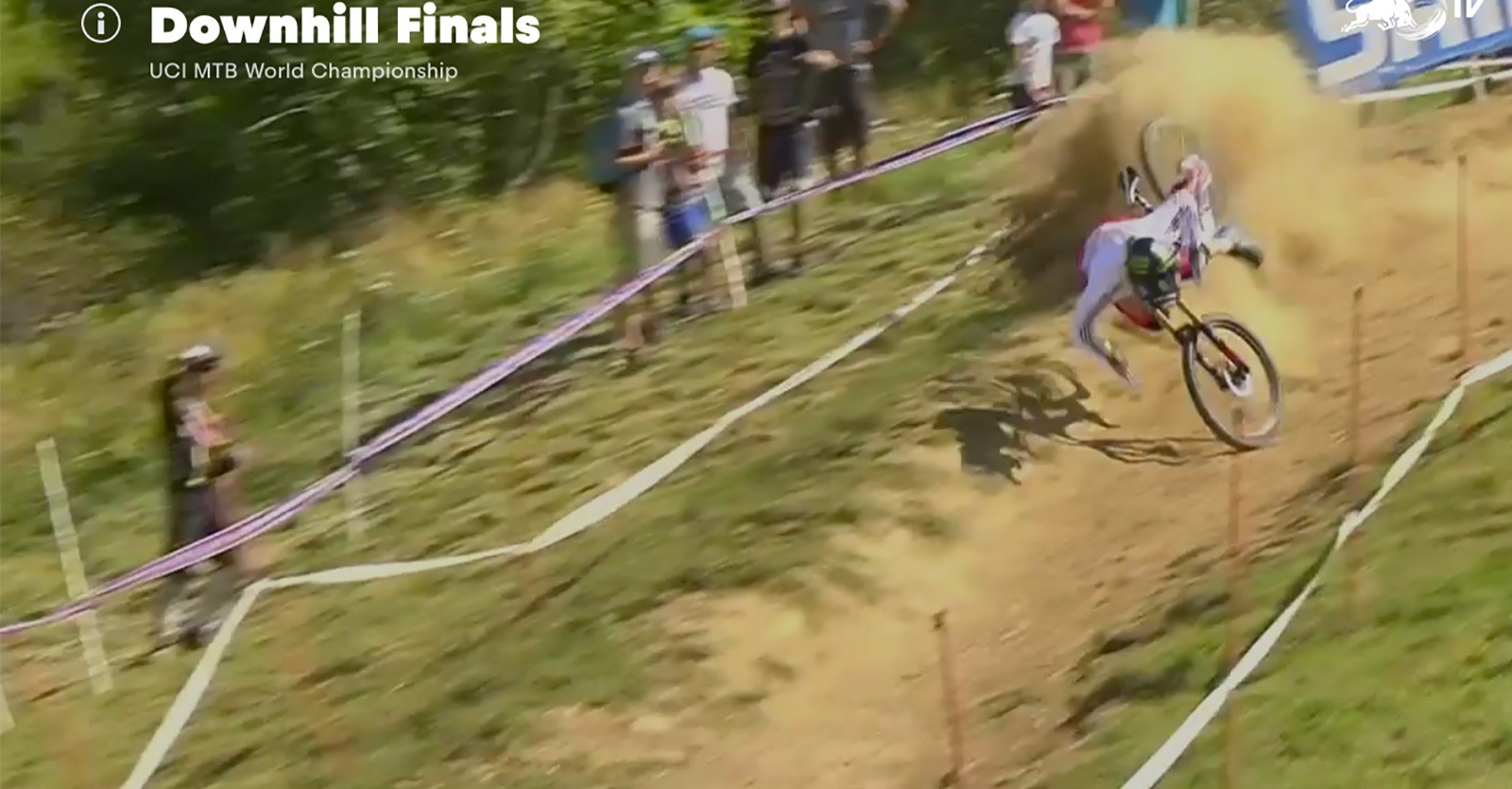 Manon Carpenter suffered a devastating crash within view of the start gate. She may have broken her collar bone.

Another fantastic year of DH racing broadcast by Red Bull. It’s not perfect and there are sometimes interruptions – but overall it’s been fantastic. Watch the replay here…

Can’t wait for next year?

Re: rachel's margin, at Lenzerheide Tahnee was just 0.7 back

"He may have some ghetto ProCore solution that popped out since he’s not sponsored by Schwalbe and whatever came out wasn’t blue."
It was one of those fancy smancy… tubes.

it does look more like a procore-esque tube there (as well as in the vid).

Indeed. It's not punctured. And way too small.

Brutal crashes by a few including Jackson. VDS takes no prisoners!

Well that's it man. I'm gonna start tucking my jerseys Niro my shorts from now on. Brilliant riding by Hart. On the edge. Too bad for Gwin, that truly sucks. And Rachel. Geez what can you say. Best downhiller of them all by far. And my hometown lad Finn. Wins with bruised ribs. Animal.

"Florent Payet is the tallest man on the circuit and he was the only rider to throw style into this step down." This is a little misleading especially after seeing the ballsy maneuver Bernerd Kerr showcased.

Thanks! I must have been making my coffee.

Finn Iles' time of 3:47:405 would have placed him in 14th in the Men's Elite field, right behind George Brannigan. Magnus Manson's 3:51:201 would have been good for 26th, right behind Eddy Masters.