Introducing Rocky Mountain’s all new Maiden for 2016. She’s all carbon, 200 mm of travel, full of spunk and compatible with both 27.5” and 26” wheels. The Maiden has been in development for four years and represents Rocky’s take on a downhill bike for a wide range of riders. Rocky chose to unveil the bike at Retallack, BC, and I was on hand to cover the launch and get a first impression of riding the Maiden. 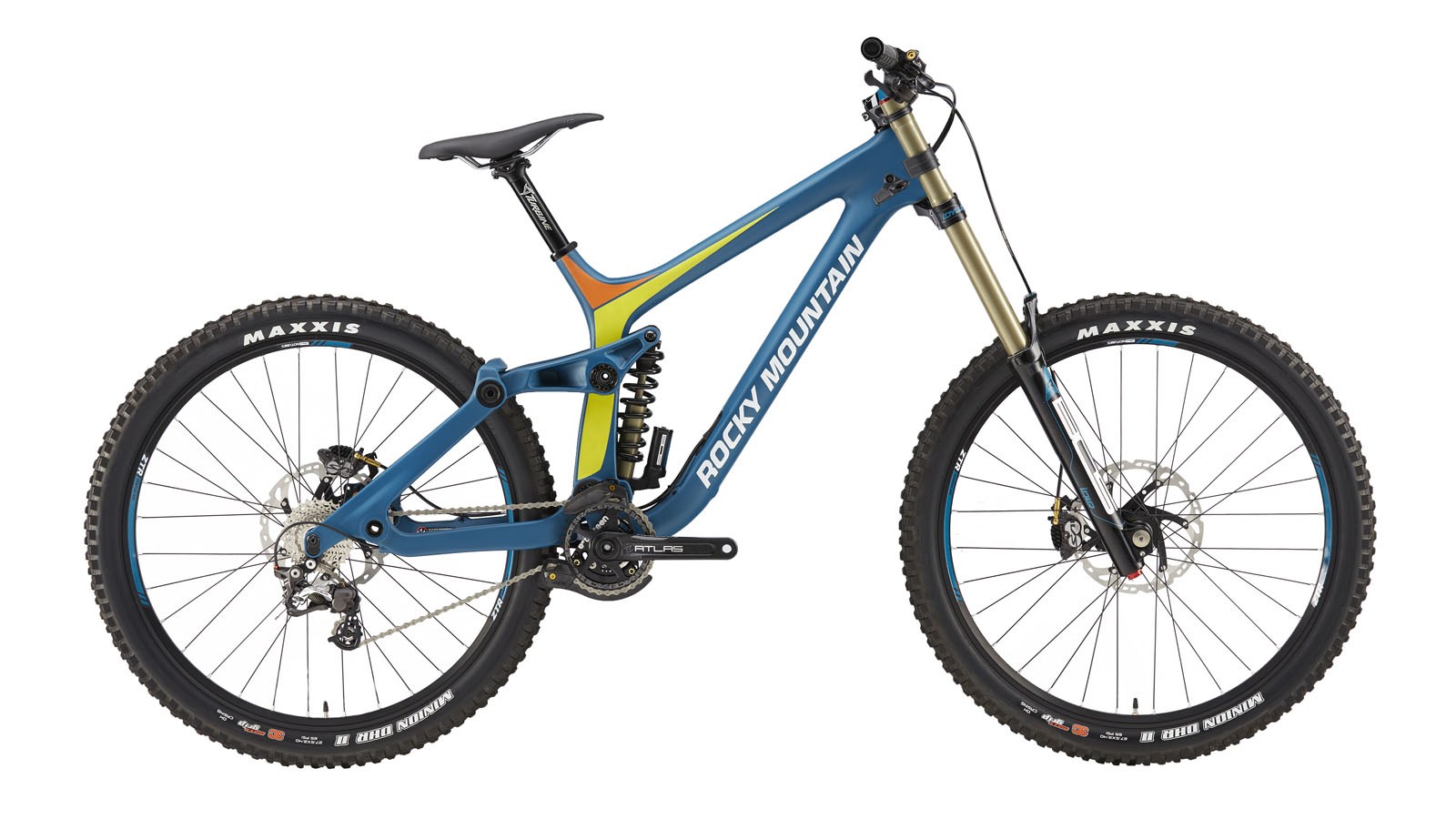 The 2016 Rocky Mountain Maiden #carbonmaiden (And also available in black)

Walking up to the bike for the first time I was immediately struck by the 60s muscle car paint scheme. While the side profile silhouette of the bike might follow a familiar form, I think Rocky has done a great job with the unique styling elements of the downtube protector, shock fender, oversized pivot hardware, and unique paint scheme; all details that will make the Maiden easily distinguishable. High level features of the Maiden are: 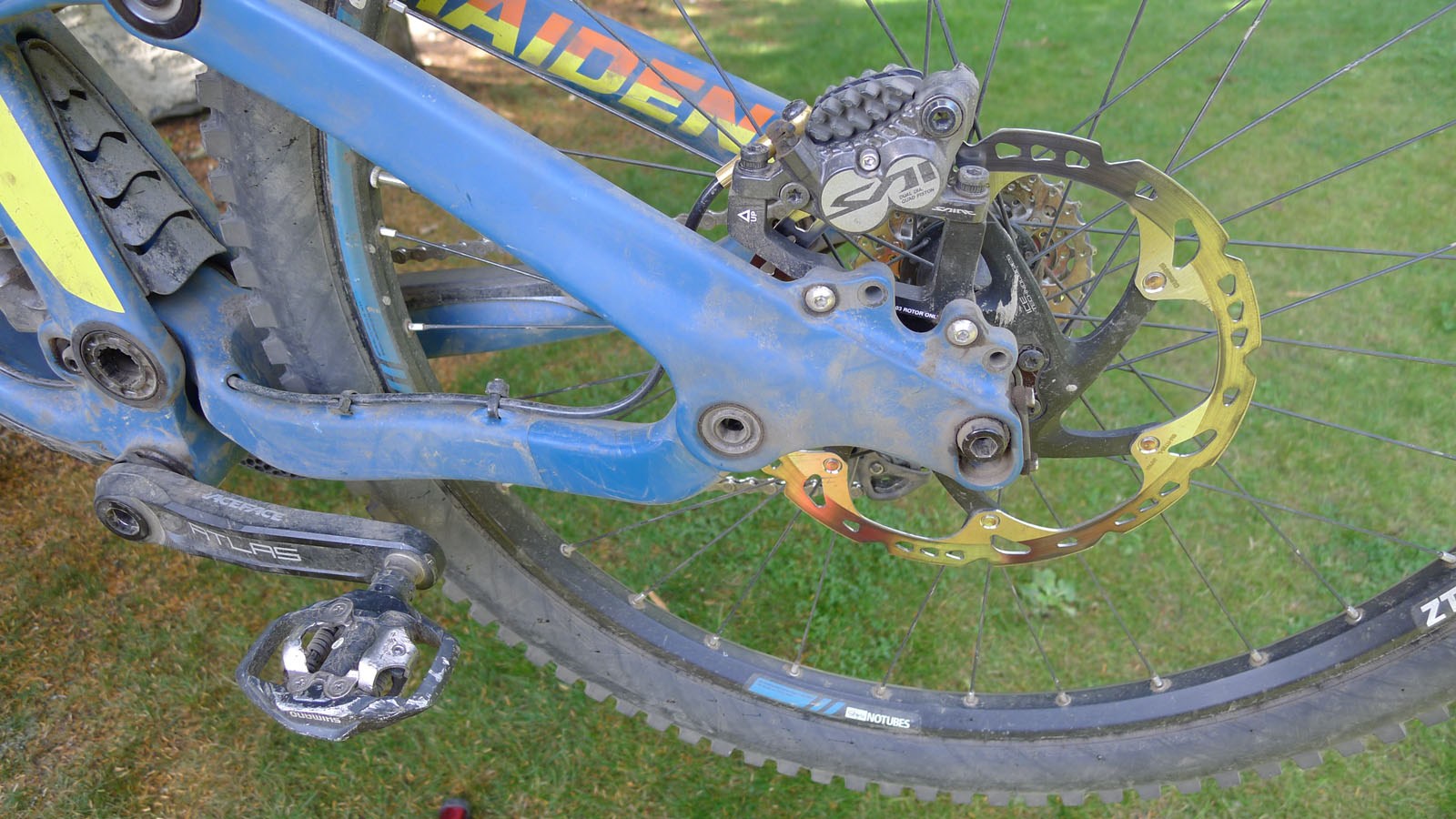 Unfortunately my Maiden got a Selkirk Mountain spray tan before I took some detailed shots. You can see the two sets of brake mounting holes, as well as the two rear axle holes that allow the Maiden to be used with both 26” and 27.5” wheels. I liked the unique styling queue on the shock fender, which is intended to protect the shock from your epic roost without impeding air flow around it. 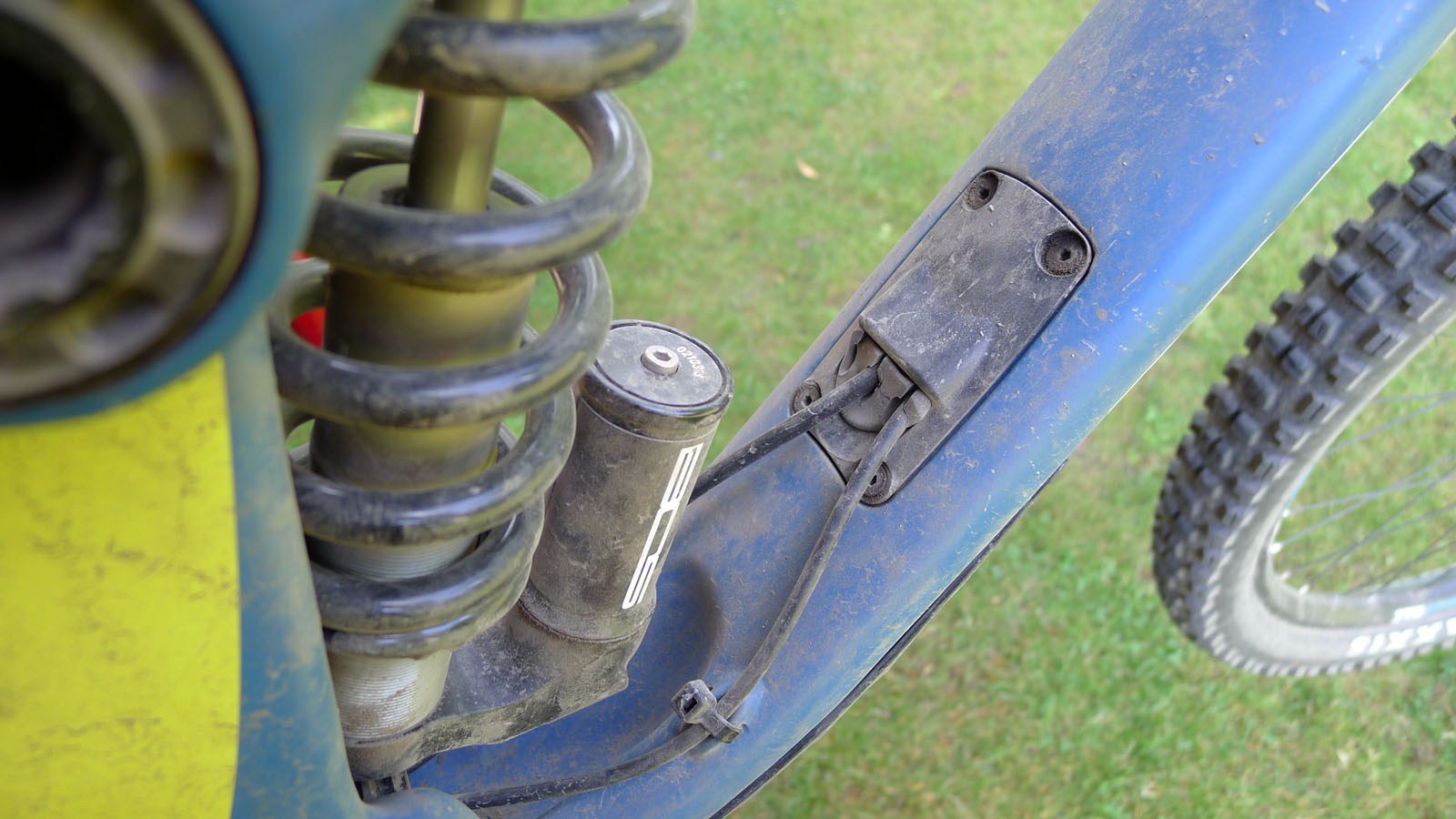 The exit for the internal cable routing doubles as a hidden compartment for Di2 components. Very sneaky. 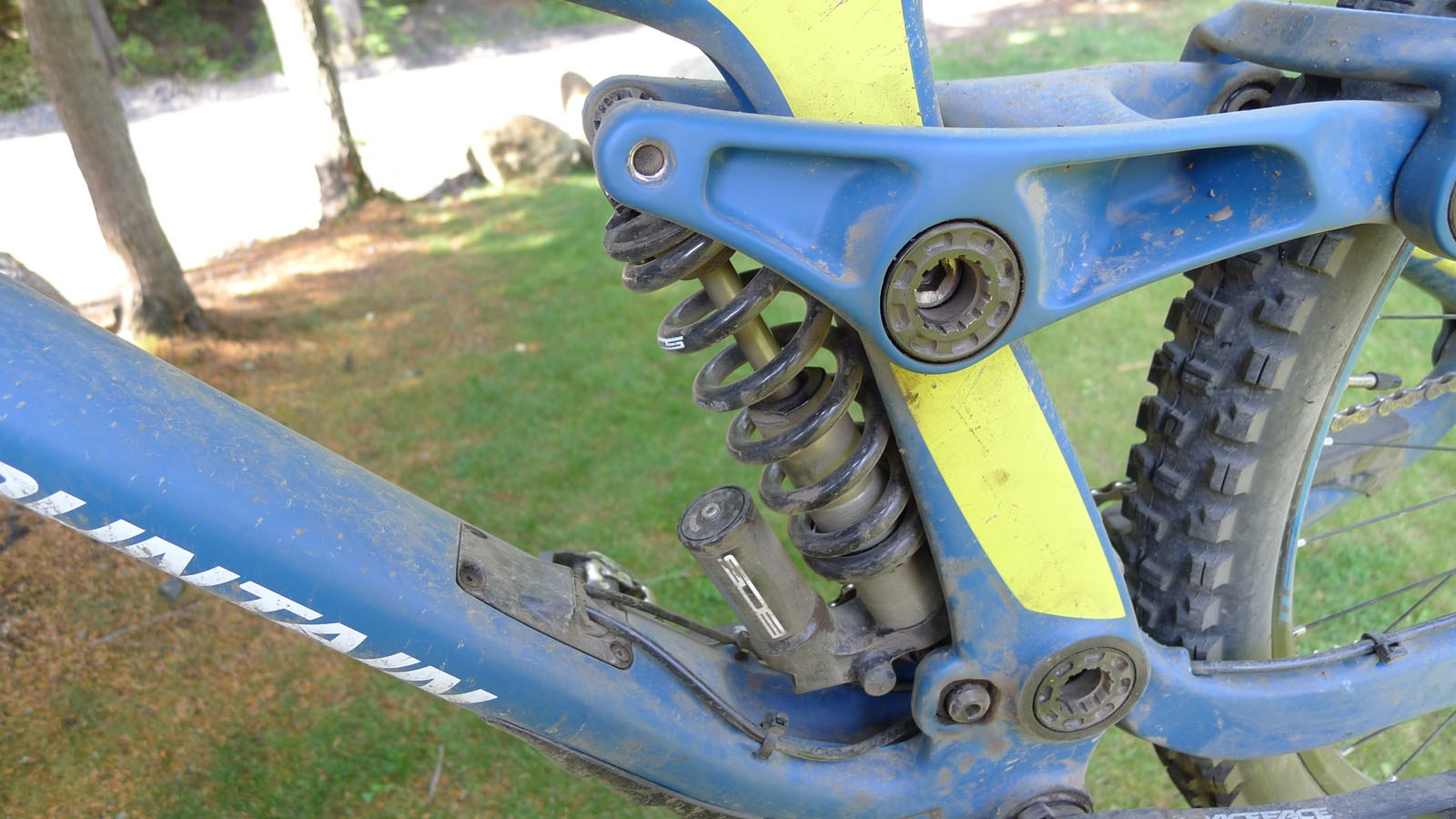 The Maiden runs on some monstrous bearings and hardware. All the hardware looks well made, and I saw no loose pivots over the three days of riding. Note the Ride 4 flip chip at the lower shock bolt, rotate this gizmo to adjust the Maiden’s head angle and bottom bracket height.

One of the defining characteristics of the Maiden is its relatively short rear end, with 425 mm chain stays. If you look at Rocky’s wide spectrum of iconic team riders the emphasis was on a fun, playful bike, rather than an ultra-long World Cup DH race machine. Other than the short chain stays, the geometry on the Maiden follows the current trends of head angle and wheelbase. Summary of the Maiden geometry: 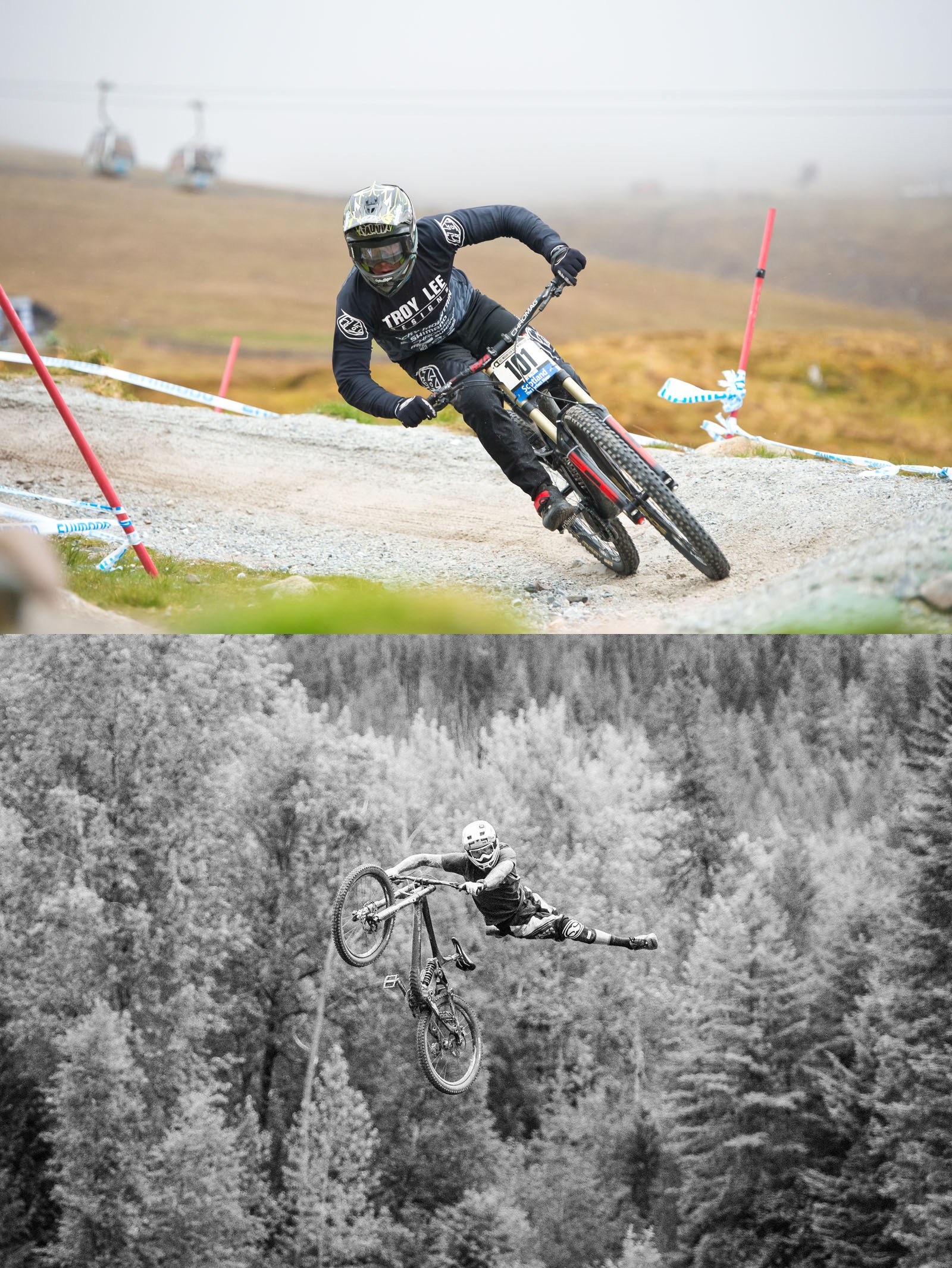 Rocky has a diverse team of athletes, and I think the influences from both racers and freeriders has lead Rocky to develop a unique take on what a downhill bike should be. 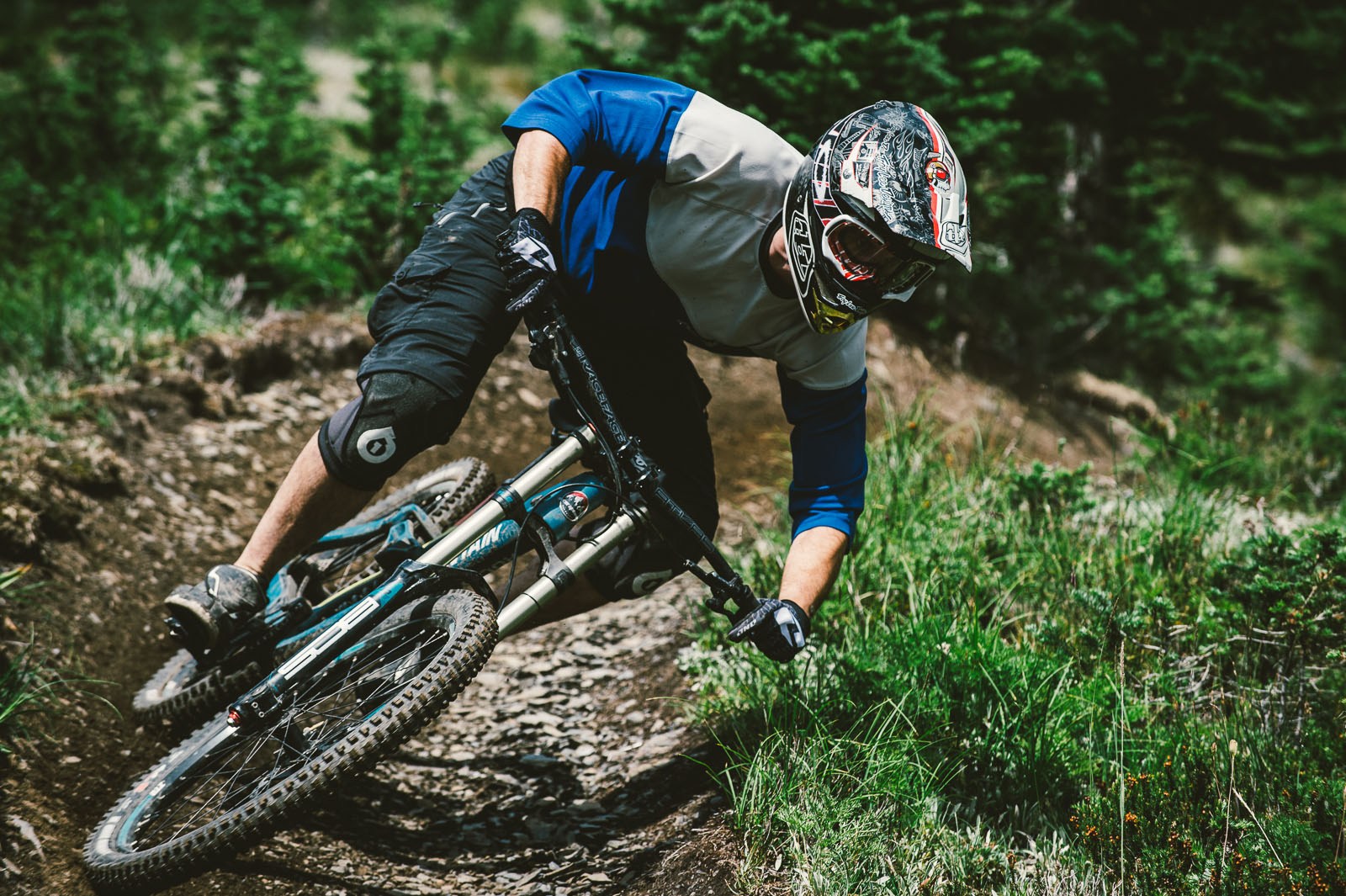 The Maiden was certainly eager to get in and out of corners with the snappy rear end, and rewarded a little extra lean angle 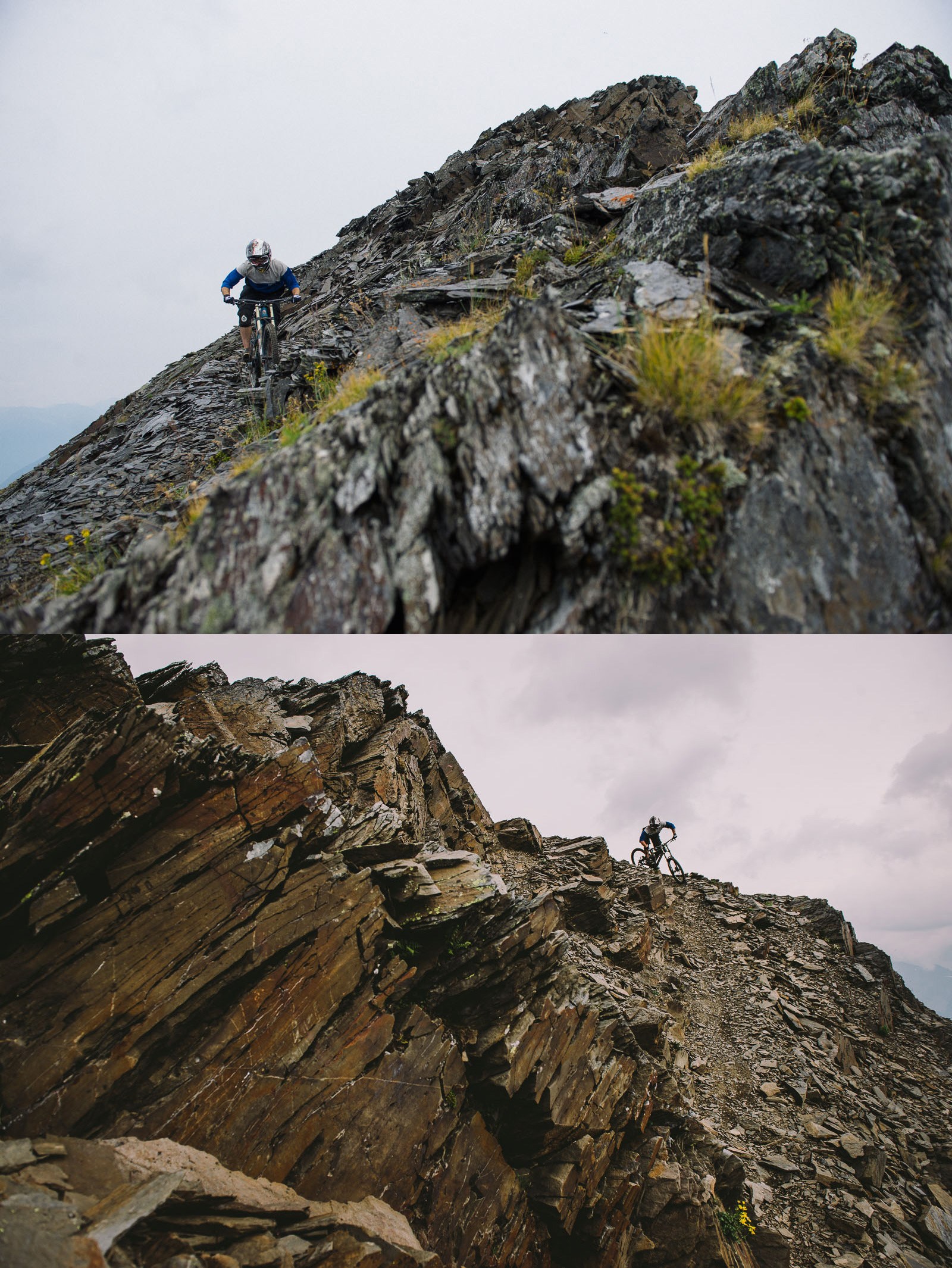 I couldn’t help but smile at how literal it was to test a Rocky Mountain bicycle in a setting like this.

The Maiden will be available in four build kits as well as a frame set. Pricing for the Maiden ranges from $5,399 CDN / $4,499 US for the Park, up to $11,999 CDN / $10,499 US for the Unlimited, and $4,299 CDN / $3,999 for the frameset. The Unlimited, Pro and frameset come in black. The World Cup, Park and frameset come in blue. One of the standout choices Rocky has made in the spec is choosing BOS suspension for both fork and shock on all builds except the cheapest Park spec. I rode the World Cup version and was impressed with both the BOS shock and fork on my test bike. Full build kit details for all builds can be seen at www.bikes.com/maiden. 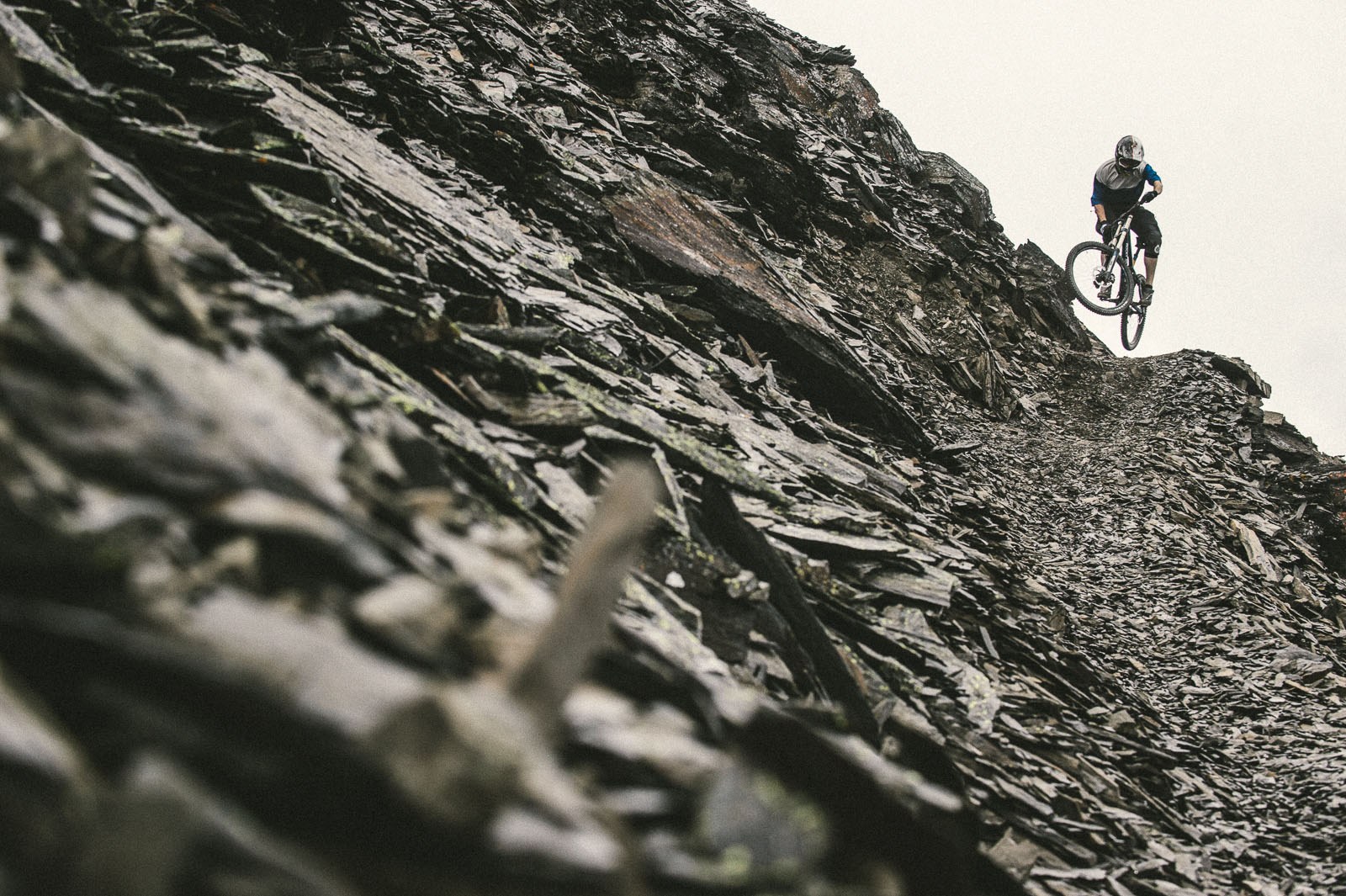 Send it deep. The Maiden / BOS package dealt with rough trail with ease.

So how does it ride? In a word: playful. I hate that term, I think it’s overused, but the Maiden begged to be thrown in to corners, thrown sideways off jumps, manualed down the trail and felt easy to rotate in to and out of tight turns. For me personally the Maiden wasn’t love at first ride, mostly because I’ve been riding bikes with longer stays as of late. But after a couple runs to dial in the BOS dampers and adjust my body position I thoroughly enjoyed my time on Maiden. Sizing is similar to most DH bikes on the market at the moment, and at 6 feet tall, I would prefer the X-Large than Large test bike I rode. 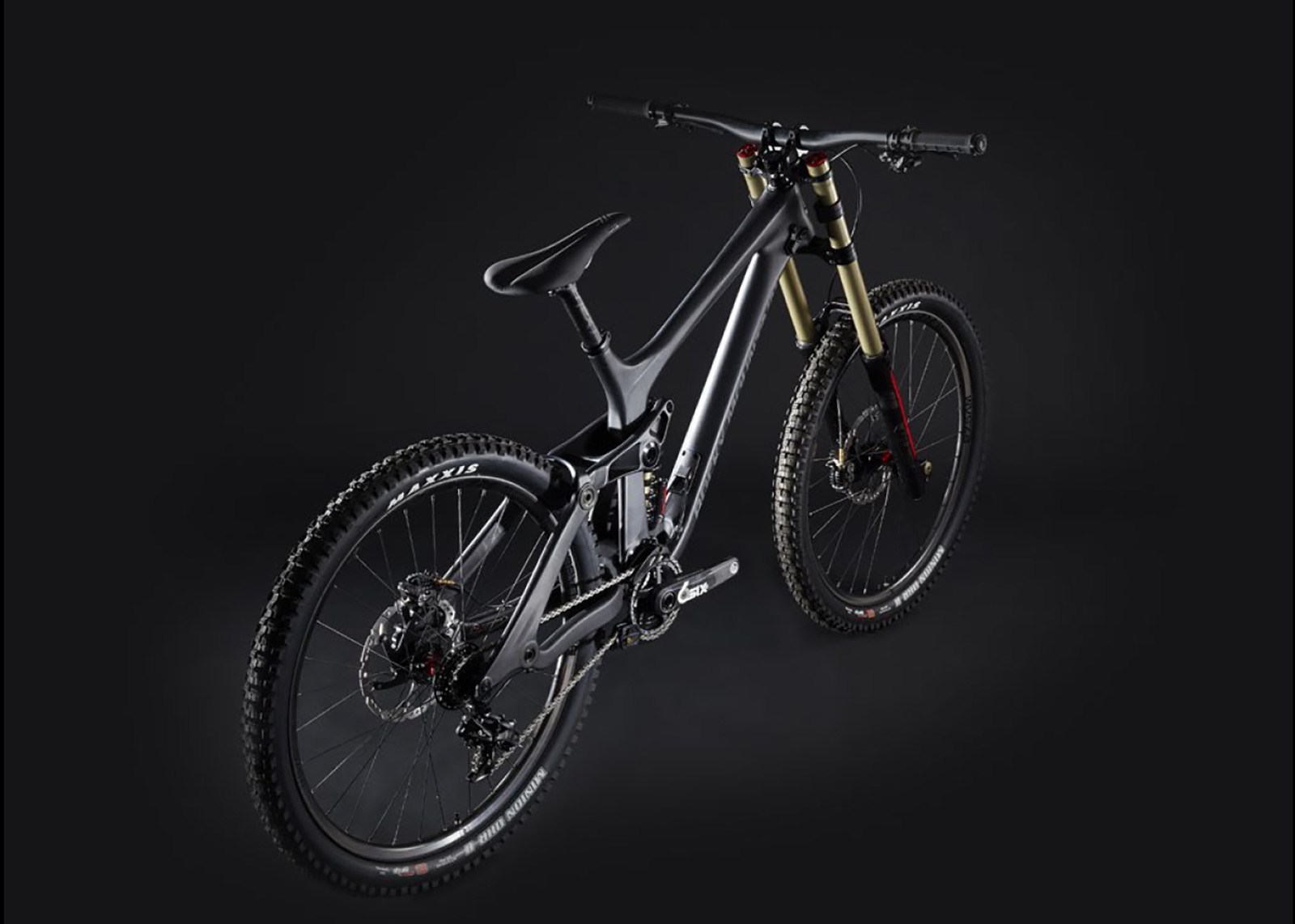 The murdered out version.

The combination of the Maiden’s leverage curve and the low speed compression provided by the BOS shock offered loads of support at sag, and also felt supportive when pedaling / cornering. I thought the bottom bracket height in the low setting was just about spot on. Braking through rough bumped out sections felt active and neutral, which Rocky says is attributed to “balancing anti-rise, caliper counter-rotation and instantaneous inertial brake transfer values.” I’m not sure I know what that all means, but when I took the shock out of the frame and cycled the suspension I noticed there was little caliper rotation relative to the rotor from sag to bottom out. 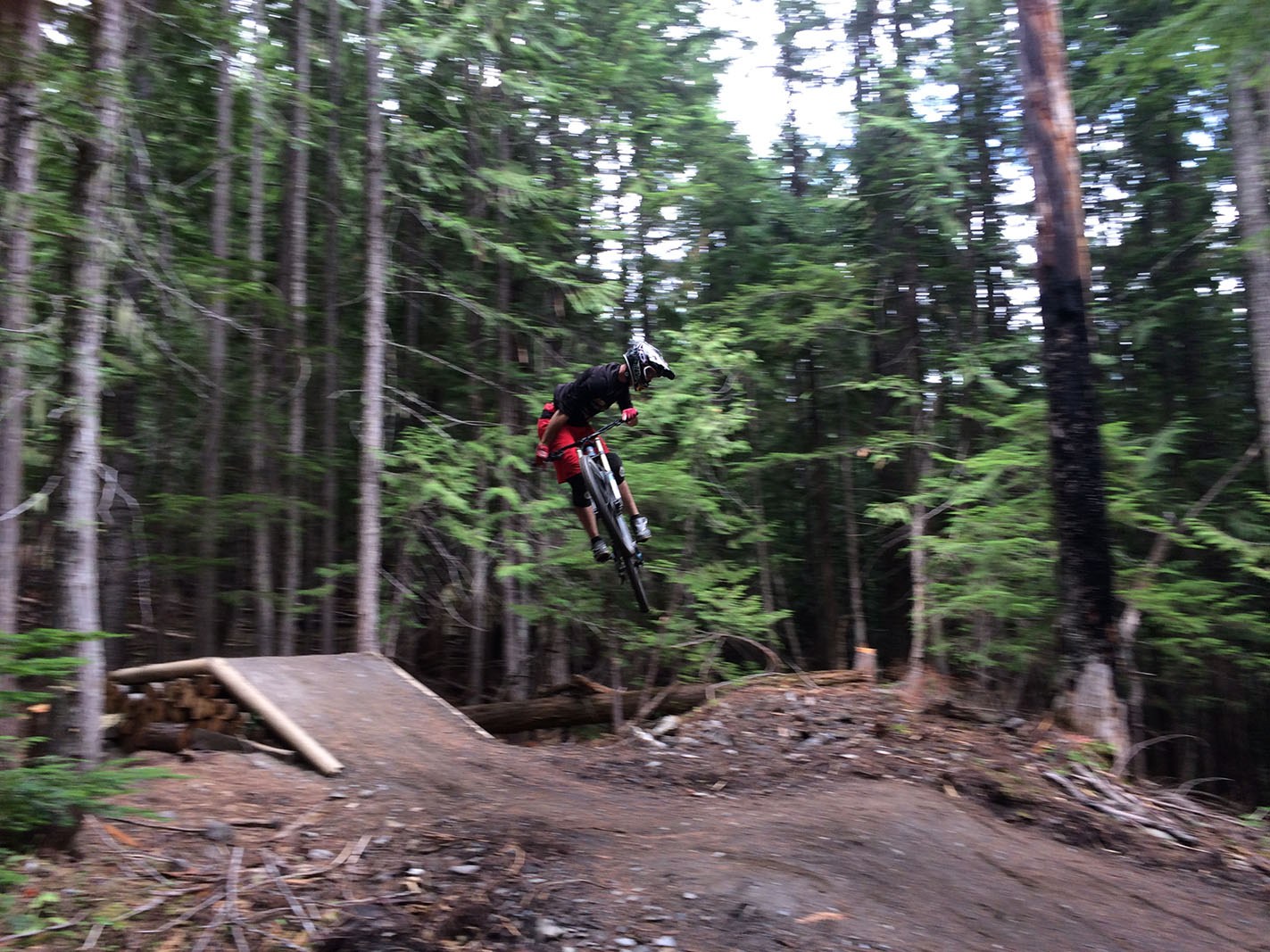 The BOS Idylle fork was good. All the adjustments made significant changes in the appropriate manner. The air spring was firmer off the top than a coil spring, but once in the travel the air spring felt very linear. I think some folks, myself included, would want a little more ramp up in the air spring, but the dampers did a great job of controlling a wide variety of compression events. On the test bike I rode the BOS Idylle did have a small amount of bushing play, but I didn’t notice this on the trail. 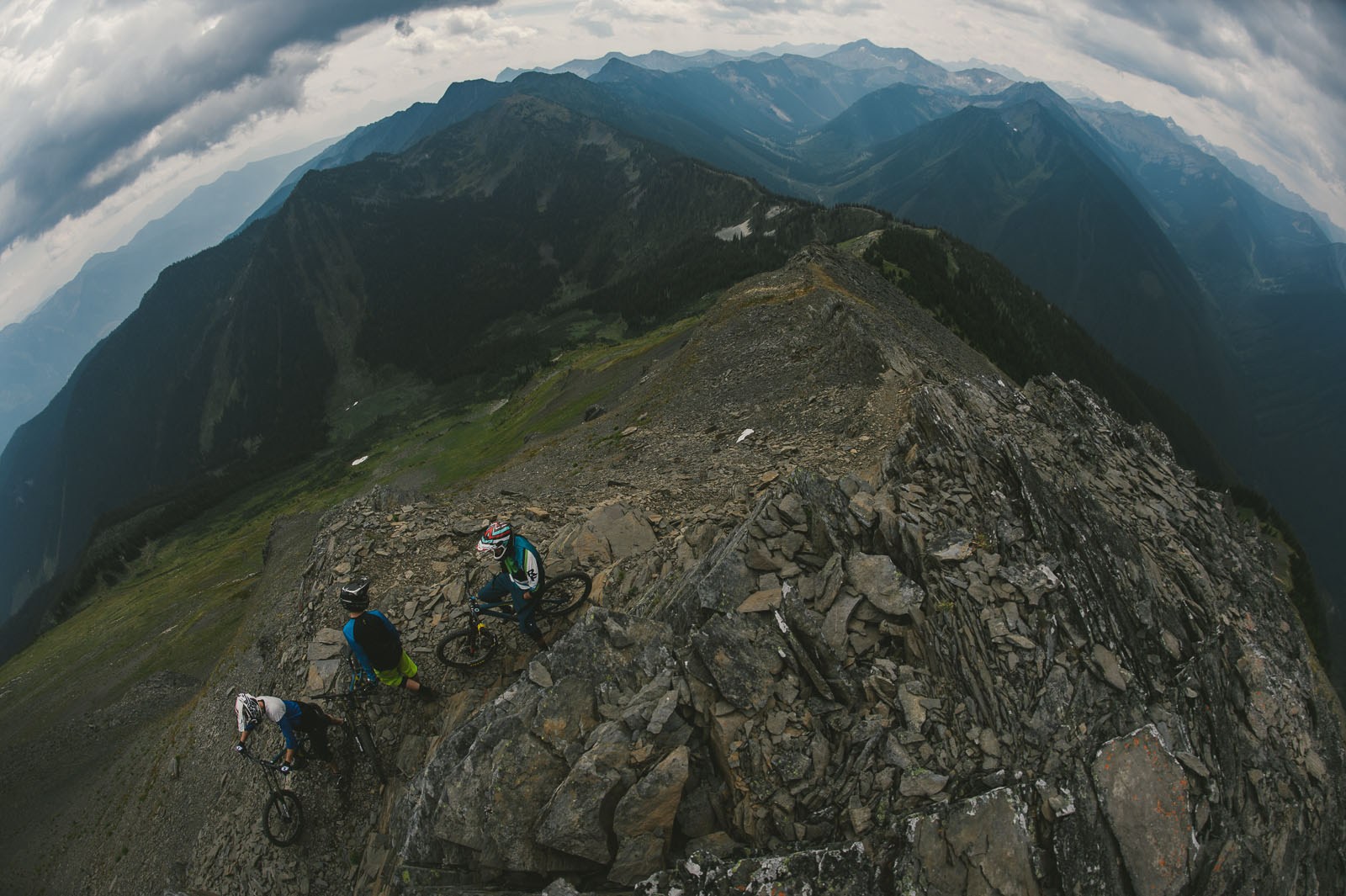 Hanging out and riding on the top of Mount Recco with Wade Simmons while waiting for the rest of the crew to heli in. I could think of worse ways to spend a Wednesday morning. 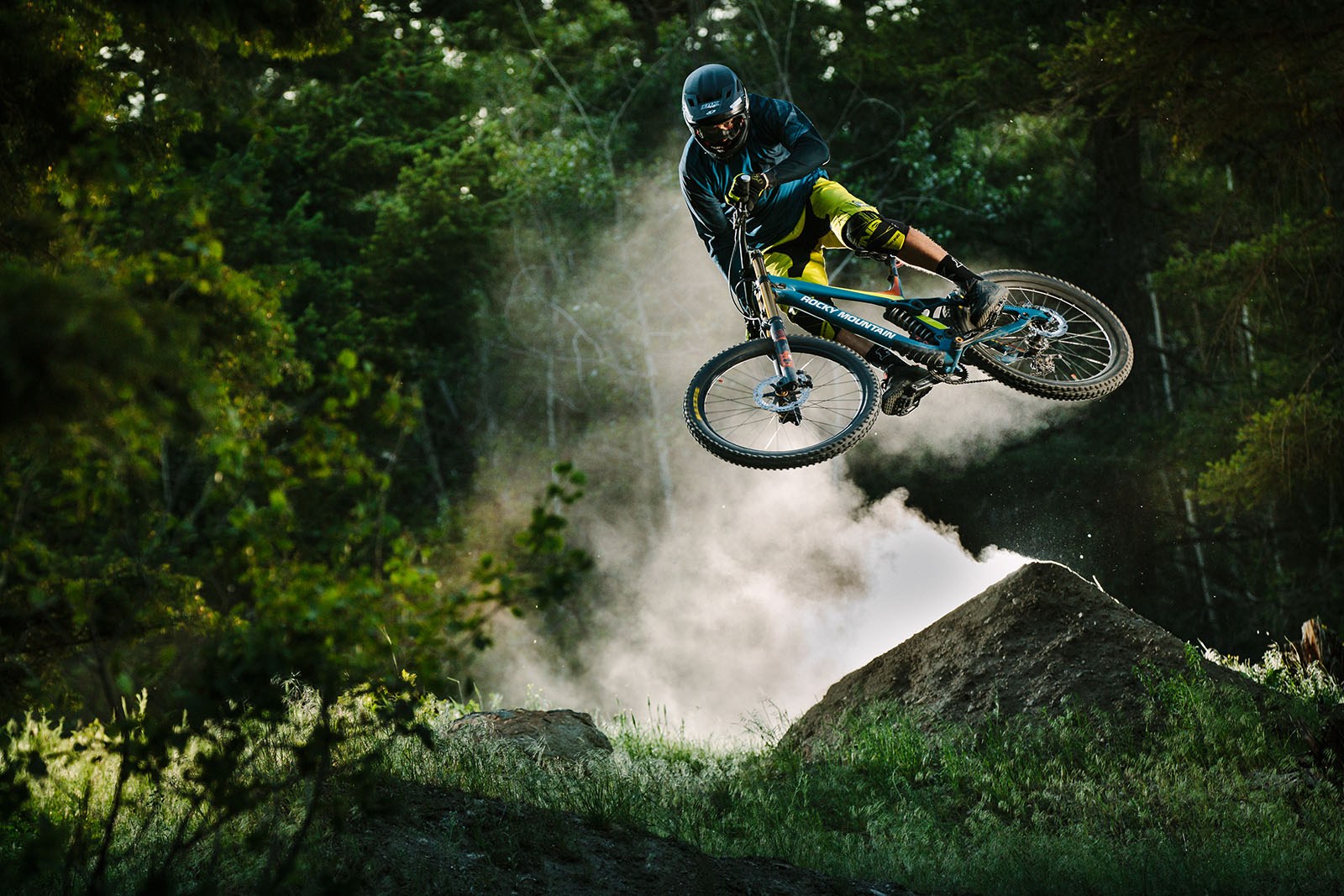 Thomas Vanderham played a pivotal role in the development of the Maiden, and the man is certainly no slouch on a mountain bike.

I think Rocky has made an interesting and different contribution to the downhill bike market with the Maiden. I like that Rocky has done things just a little bit differently, and I hope that pays off for them. The Maiden railed through corners, begged to be taken airborne and monster trucked through rough sections with composure. There has been an apparent move to longer World Cup inspired bikes as of late, but I’m not so sure that what’s most effective on World Cup race tracks is necessarily the best solution for the vast majority of riders. Rocky’s mix of team riders seem to have created a bike that’s equal parts race business and freeride play, a characteristic I think many riders will love. While pricing seems a little on the high side, the builds are well appointed, smartly thought out and the frames appear to be nicely made. All in all I think the Rocky Mountain Maiden is a downhill bike well worth checking out.

Rocky is back in the DH bike game. Time to make room in the stable?

what a fucking brutality!!!

So, does this leave the RM7/Flatline to the dustbin of history?
And who, who do we venerate for producing a Giant knock off?

"Put them in the carbon maiden" doesn't have quite the same ring to it.

That video is rad, without some of the bigger jumps I'd be jonesing to hit that trail. Curious where it is.

the credits say its filmed on location in Merrit… 🙂

Merritt is a bit of a hidden gem. I used to take weekend trips there all the time!

TV's rebound is set up crazy fast. Then again, for good reason.

Agreed, everything about that video is straight up awesome.

that's an awesome video - if you've made it to here without watching it, go back now.

I posted it on its own as well for that very reason.