Words David Ferguson
Photos David Ferguson
Date Jun 25, 2015
For the eleventh year in a row, Magura USA has descended upon the pristine landscape of Sedona, Arizona for its product launch press camp. In a red rock and cactus landscape, with scattered energy vortexes, and tourist shops that will happily sell healing crystals to the uninitiated, the quaint villages of Sedona and Oak Creek are destinations for the new-age spiritually inclined. But they’re also listed beside a check-box on the bucket lists of a lot of mountain bikers, and for good reason. There’s a lot more going on here than just a few multi-use trails in the desert. 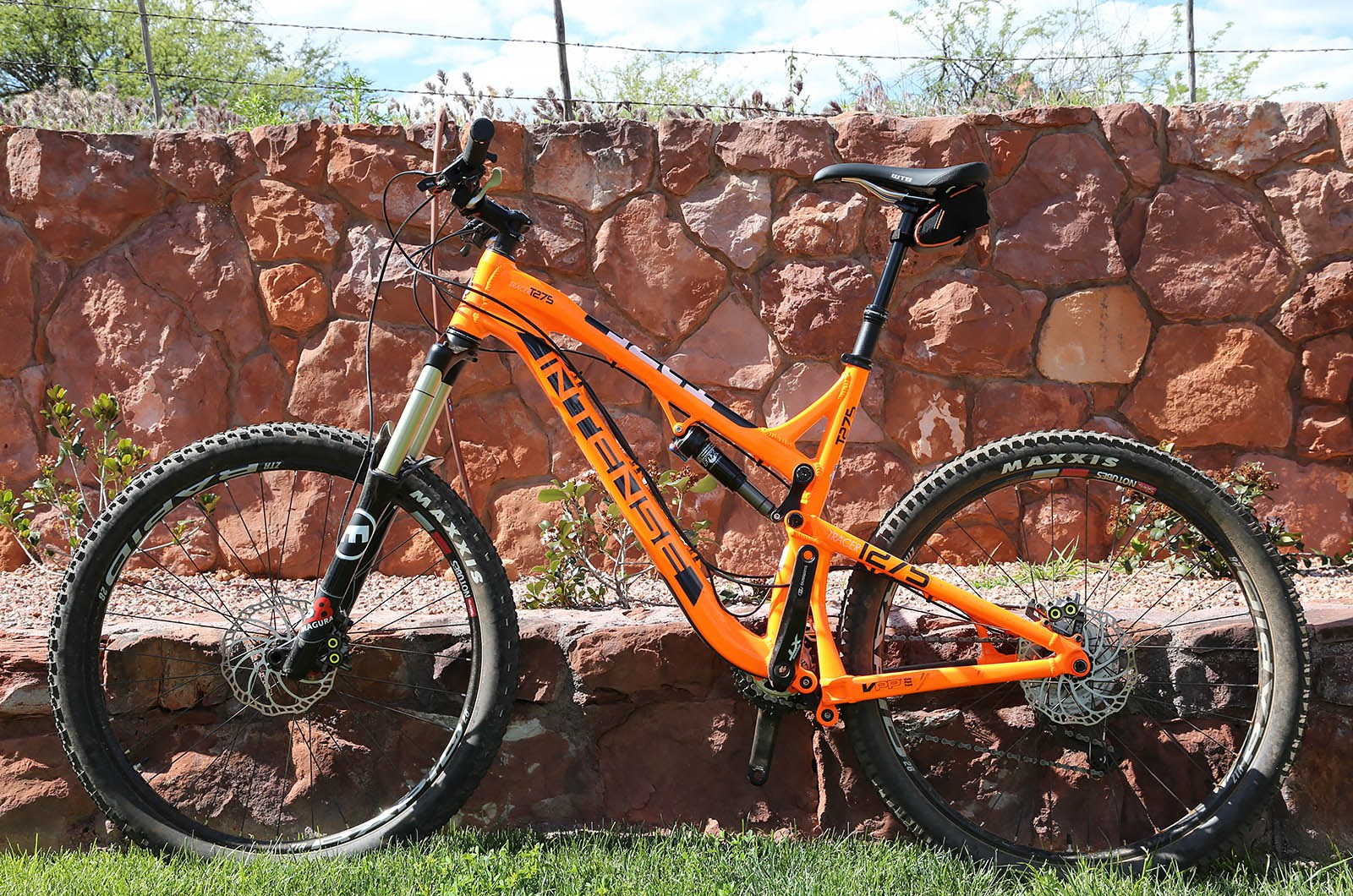 I rode an Intense Tracer 275, alloy edition, for the 2 days I was there. It did not have the same build-out that you’d get from the factory, but instead had a Fox Float CTD, Shimano Deore XT drive train, WTB Volt Saddle, Stan’s Notubes Rapid (oem only) rims, and Maxxis High Roller 2.3 rubber. My ride had Magura’s MT7 brakes installed front and back, and their 150mm TS8 fork. 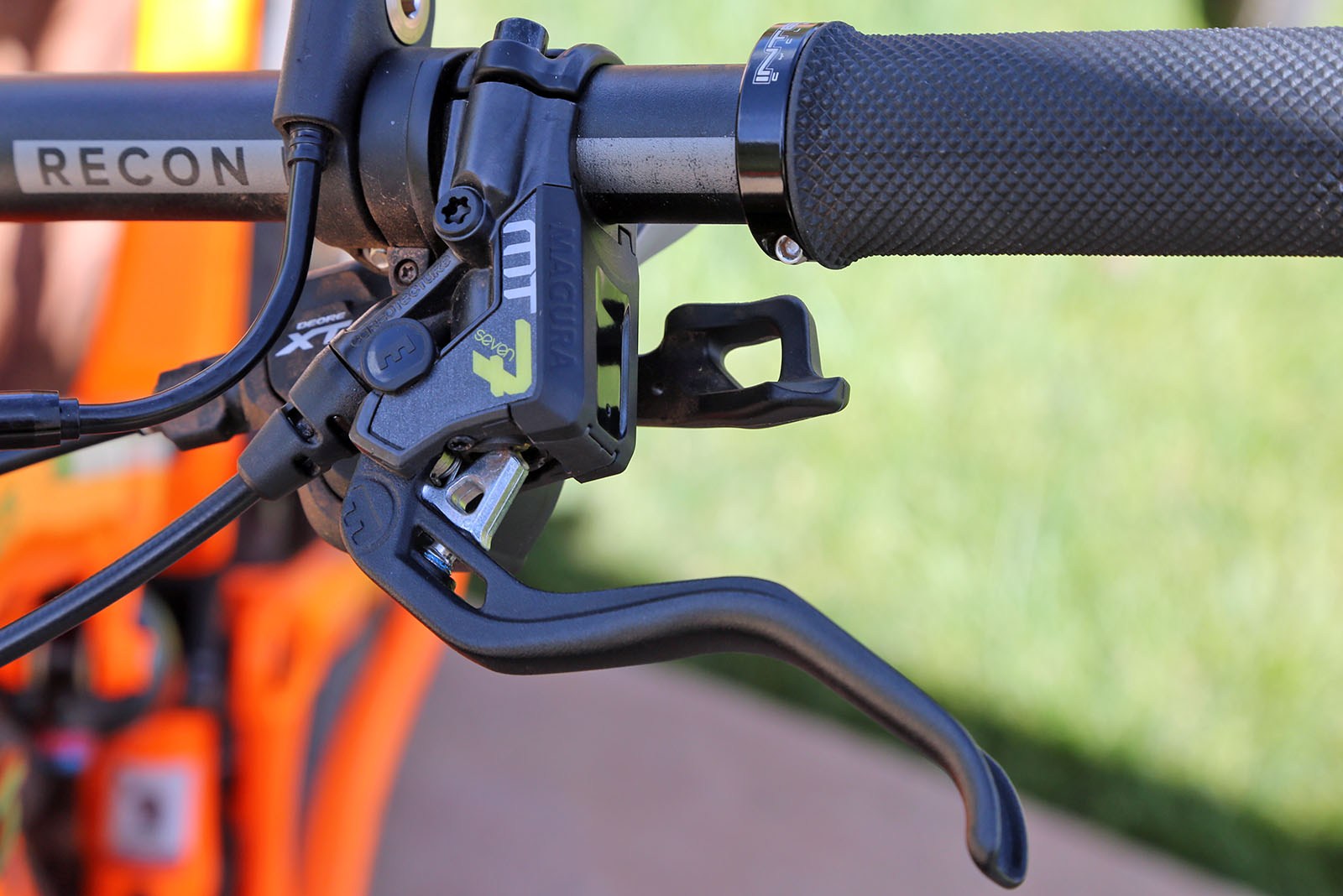 By some measures, the MT7 occupies the second place position on Magura’s podium. If you are concerned with weight, and want a bit more choice with disc diameter, the MT8 is your brake. The master cylinder and brake lever are made from carbon fibre, whereas with the MT7, you’ll have to make due with an aluminum alloy lever, and the classic Magura “carbotecture” carbon-reinforced resin composite for the master cylinder housing. However, if your main concern is pure stopping power, the 4 piston calliper with the MT7 is unparalleled in performance testing. 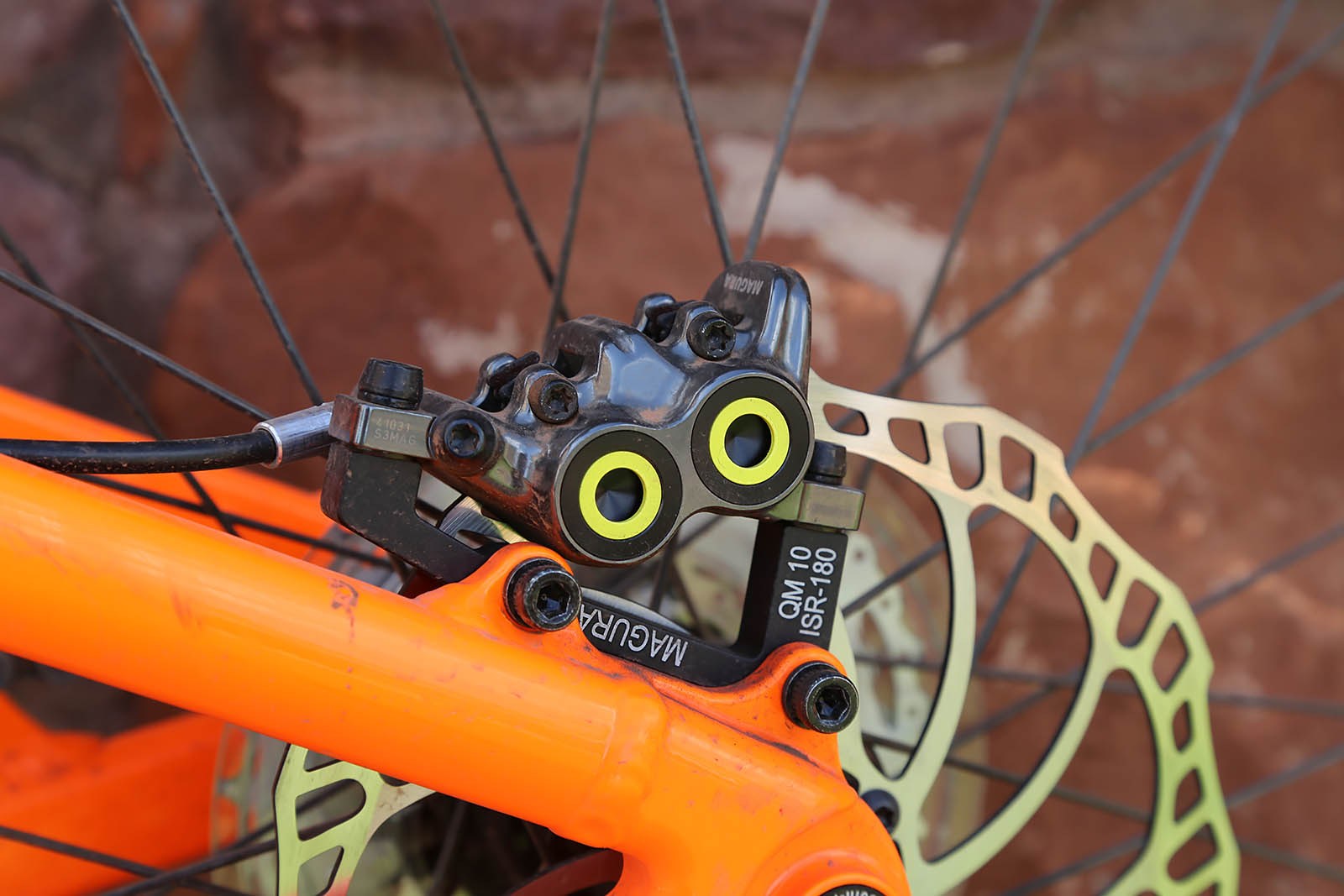 I rode with the 4 piston callipers front and back (some were riding with a 4 piston calliper up front, and a 2 piston calliper in the back), and could come to a standstill from high speed ridiculously quickly. That power is controlled through very good modulation capability. I had no problems with the disc rubbing on any part of the calliper (unlike Cam, who told me just recently that he’s been having a lot of trouble with getting the calliper perfectly aligned to avoid rubbing), and I had no brake squealing (keep in mind the bike was built up by Magura’s mechanic Mike Mantione). 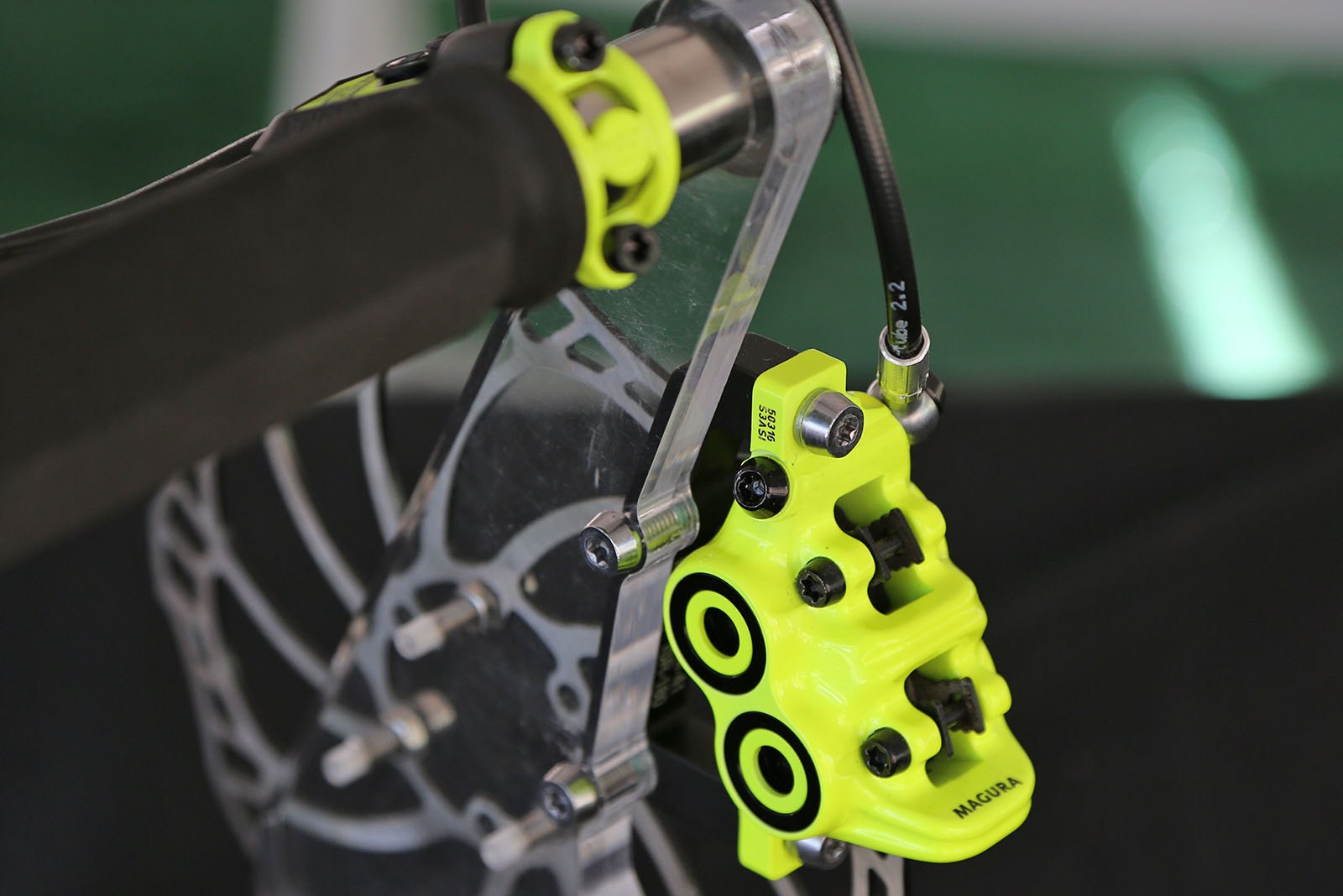 Something to look out for in the 2016 model year are some new levers for the MT6/MT7/MT8 that have more reach-adjust, getting nice and close to the bar. This should satisfy the biggest complaint riders had when these brakes were introduced last year. MSRP for the MT8, MT7, MT6, MT5 and MT4, respectively are: $360, $310, $260, $200, and $160, all in USD. This year is Magura’s 40th anniversary, so they have done a special edition calliper for the MT RaceLine in fluorescent green as seen above (the same green as their original hydraulic rim brake, the “HS33 Raceline”, circa 1993). 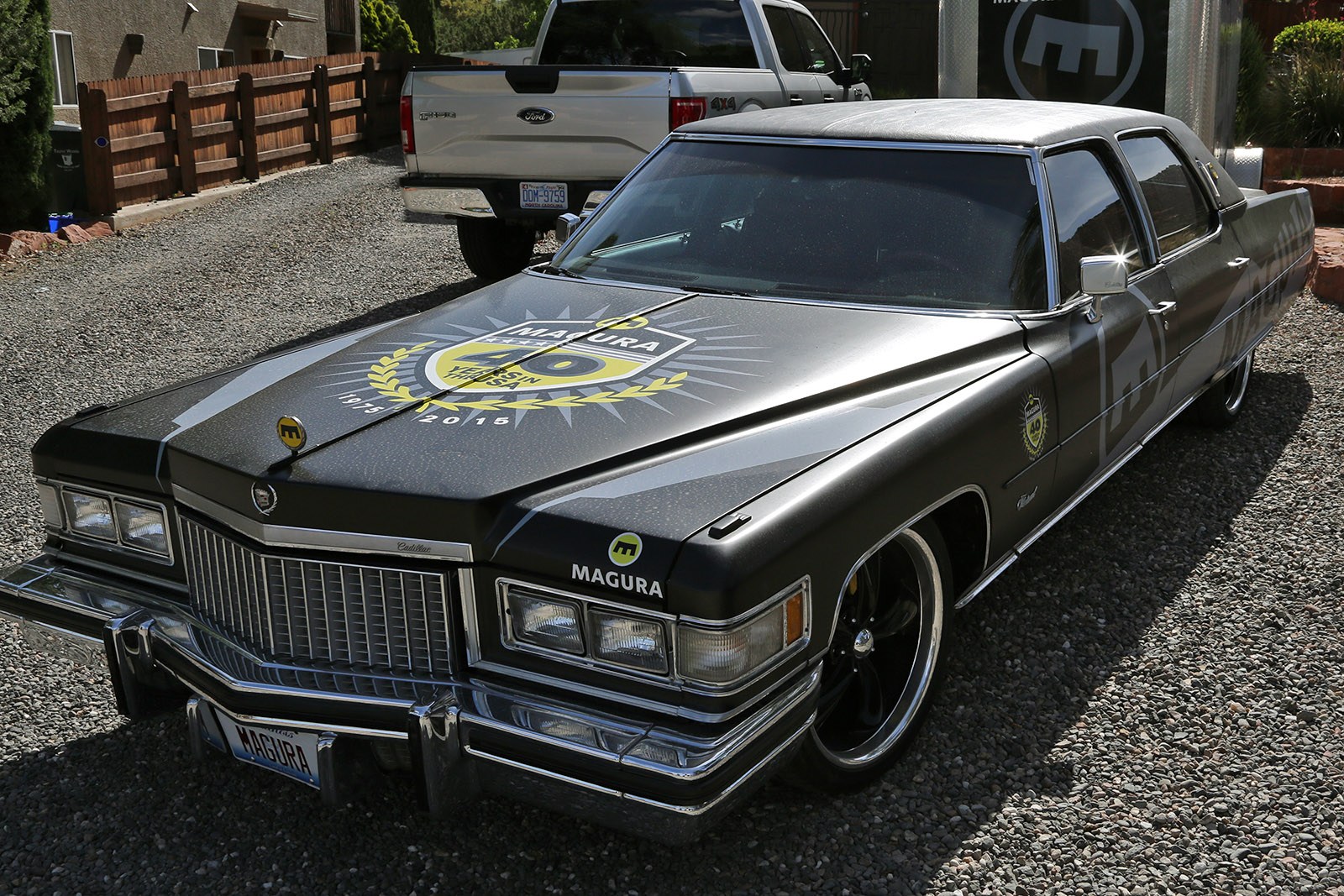 Perhaps their pimped out 1975 Cadillac is more up your alley as far as anniversary presents go. You could stash 4 bikes in the trunk for shuttling.

Sedona, like many other popular riding destinations in the USA, has its share of conflict around trail advocacy and use: who gets to build the trails, who gets to maintain them, which ones get maintained, and who gets to use them. I have been fortunate enough to have attended this press camp in the past, the last time being in 2012. On my first day of riding over the dusty red dirt and slick rock on day one of this year’s edition of the camp, I noticed very quickly how good the trails looked and felt from a maintenance perspective. This got me wondering – have the greater powers come to embrace mountain bike tourism in Sedona? 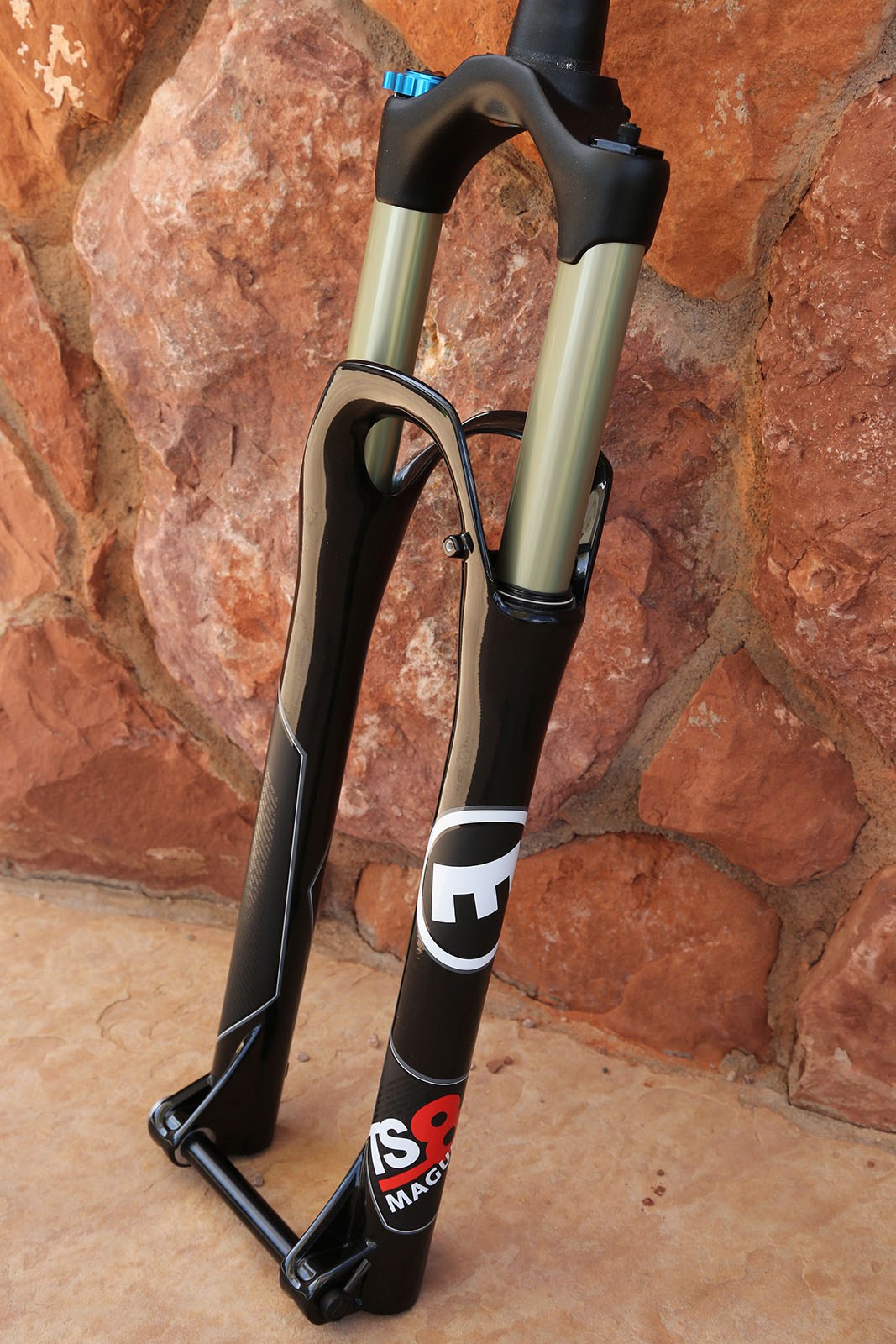 Magura’s 150mm TS8 fork, which retails for $800USD, came equipped on all of our demo bikes. Magura still uses its patented Dual Arch Design, and it still offers very good torsional stiffness. The 15mm thru-axle requires a T25 driver to undo, which is included and stowed away in the axle itself. Adjustability comes in the form of DLO3 “Dynamic Lock Out”, which gives you 3 ride settings: open, firm, and closed. For $1200, Magura will sell you a kit that includes the fork and their eLECT automatic real-time ride adjustment kit, which utilizes an accelerometer, piezo electric motor and onboard processor to control the fork’s behaviour. I did not get a chance to try a fork with the eLECT option. The kit is available separately for $650. For the weight concerned riders out there, it’s worthy to note that the TS8 weighs in at 1685g (150mm 27.5 version), more than 100g less than the Rockshox Revelation RCT3 and the Fox Float 32 27.5. Price wise, it sits in between these 2 other forks, $40 less than the Fox (MSRP) and $20 more than the Revelation (MSRP). 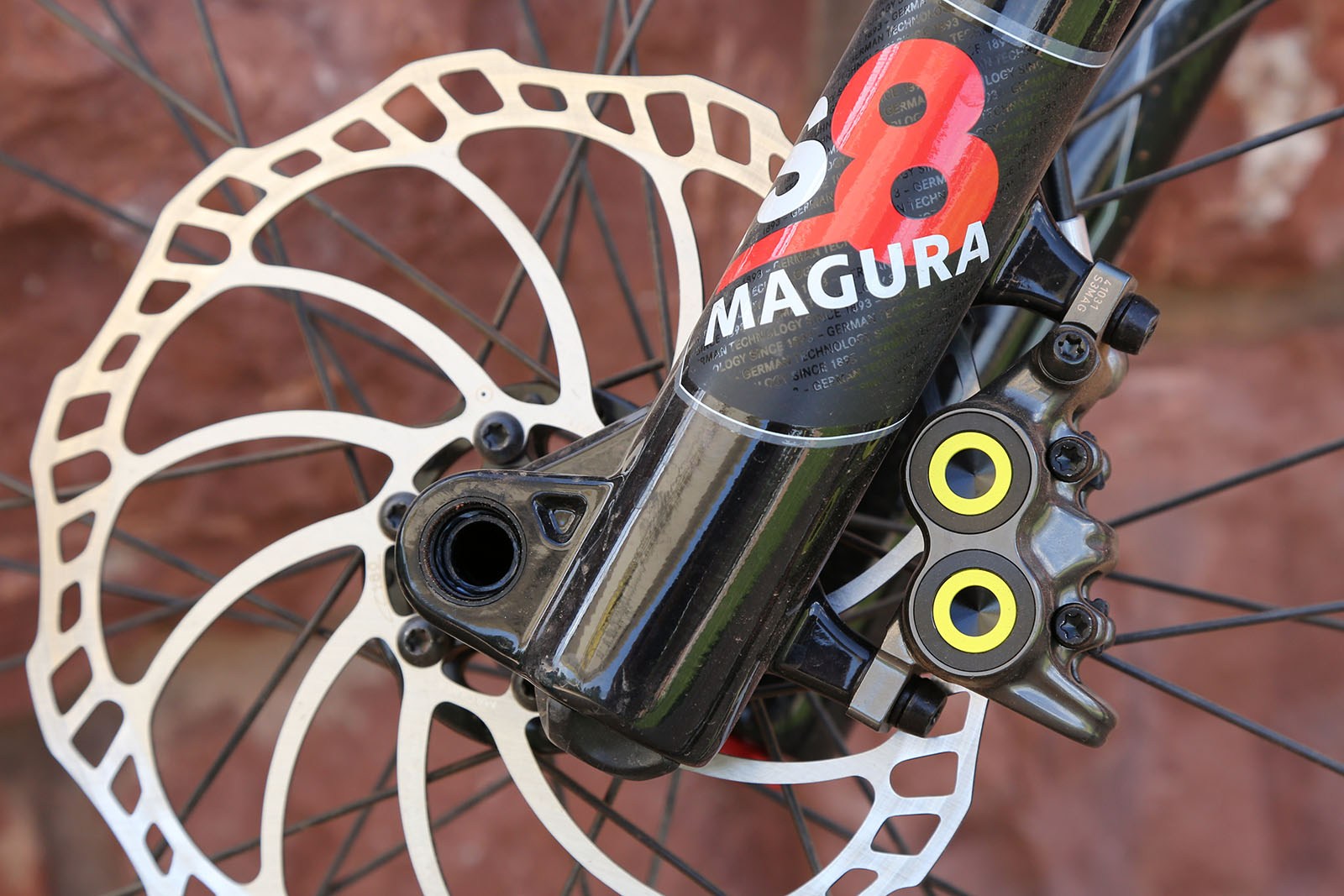 For the sake of transparency, it should be known that I am not a constant tinkerer of adjustments (although this article got me thinking more about it), and I don’t sweat minute changes in ride characteristics as I just don’t think I’m sensitive to them. I’m more of a dial-it-in once, and then-go-ride kind of guy. I ensured the fork was setup correctly for my riding weight, did some quick tests of the rebound, and off I went to ride the red rock. I left the fork on the firm setting for our rides, which was fine for any of the ascents and descents, including some super fun steep technical pitches. I’m leery of 32mm stanchions, but never noticed any rubbery flex in the TS8. Chunky front-wheel drops involving simultaneous turns were handled bravely by the fork, in part due to the dual-arch design. Bottom line is that given the bike setup and the nature of the trails, I rode for two days without thinking about the fork, just the riding. In my books, this is a win. The big question remains though: why don’t I ever see Magura forks on our local trails? I don’t know which companies spec them out as OEM, and I don’t know where to buy Magura forks around Vancouver. The dealer locator functionality on their website results show nothing for Vancouver and area. Out of site, out of mind? Is the pricing off? Is there no local consumer faith in the product?

I did some investigation into the local trail associations. From their web site, the Sedona Mountain Bike Club looks like a consortium of local shop owners, riders and enthusiasts who have taken matters into their own hands. A post on their main page reveals a recent departure from IMBA, and an enthusiasm in their new found ability to direct the fruits of their fundraising in any direction they like, rather than following the policies of IMBA. I thought perhaps this could be where my perceived improvement in the quality of the trails may be coming from. It turns out that the SMBC lost their IMBA chapter status, and instead IMBA promoted chapter status for the Verde Valley Cycling Coalition. This coalition group has a working relationship with the United States Forest Service and the Red Rock Forrest Rangers, who altogether have been doing work on the trails, but to some it’s perceived as a sell-out. Regardless, the Forest Service put together a trail adoption plan last year, which included the most famous Sedona trail of them all: “Hangover”. 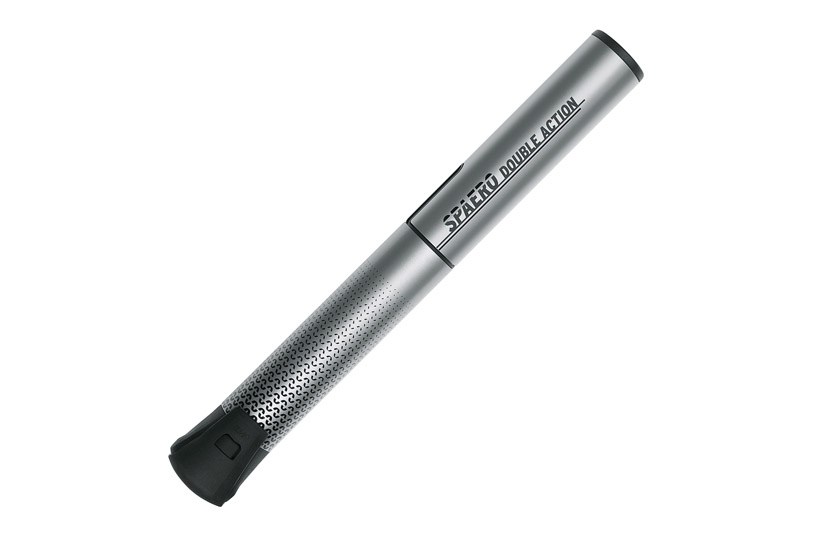 Also in attendance this year was Mark Burgener from SKS, who went out of his way to add some pretty unique touches to the press camp, including cutlery made from their smallest hand pumps, and table centre pieces carved out of some track pumps. Aside from the large selection of pumps that SKS makes, he was showing off a variety of fenders for fat bikes and a few tweaks to some of the existing road fenders. One item that caught my eye was a bottle cage that could be strapped down onto any part of a bike frame. I’ve been using an SKS Rennkompressor for a number of years now, and am happy to speak to its quality. I’m looking forward to trying out their Spaero Double Action hand pump: air moves into the tire during both stroke directions. 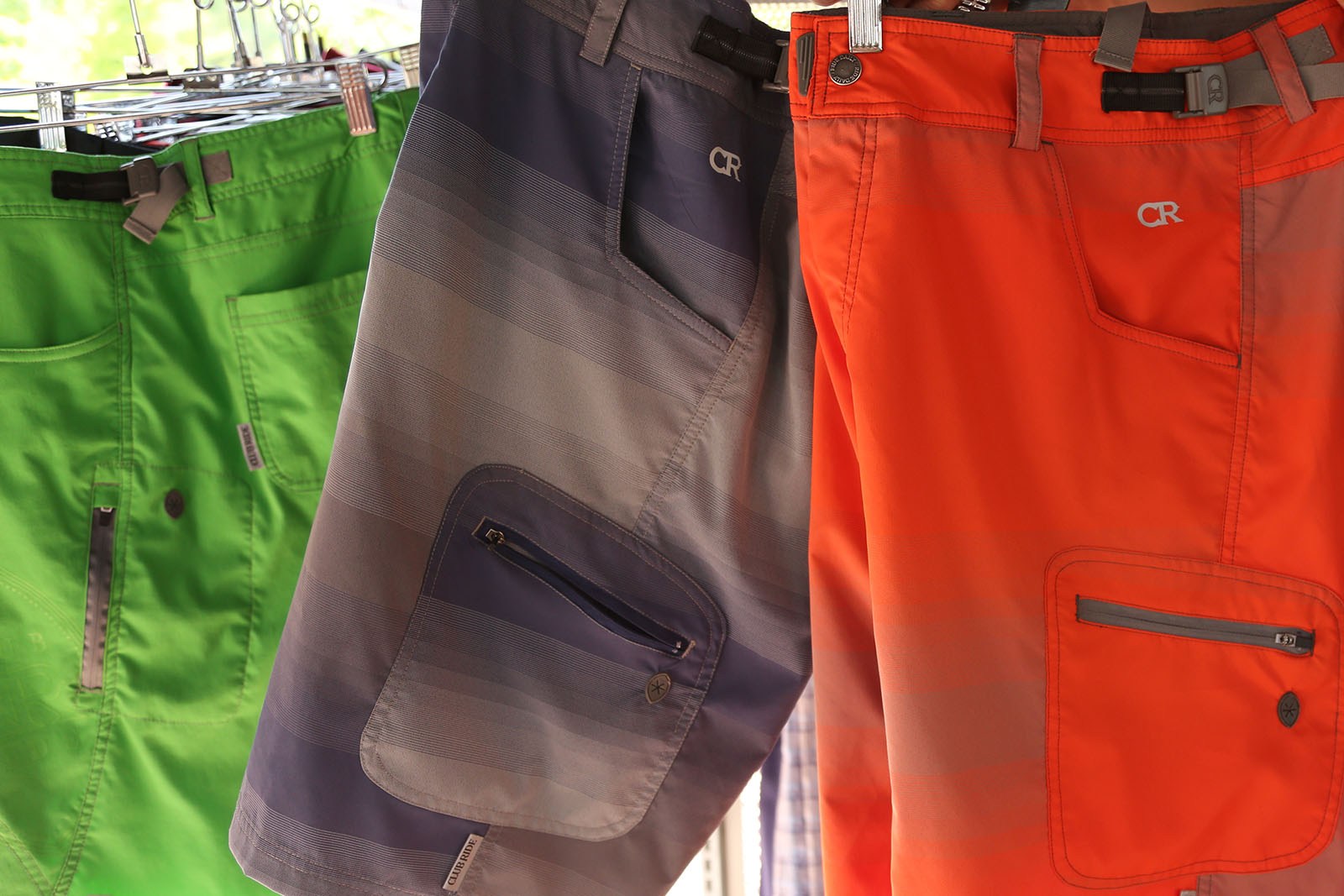 Club Ride is an apparel company that’s been around since 2008, and focuses on creating garments that transition well from being worn on the bike to being worn in everyday social activity off the bike, presumably back to back. Mike Herlinger, the founder and designer, is an avid mountain biker himself. During some discussions with him, it became apparent that he’s quite detail oriented. This attention to detail definitely spills over into the design of the apparel. 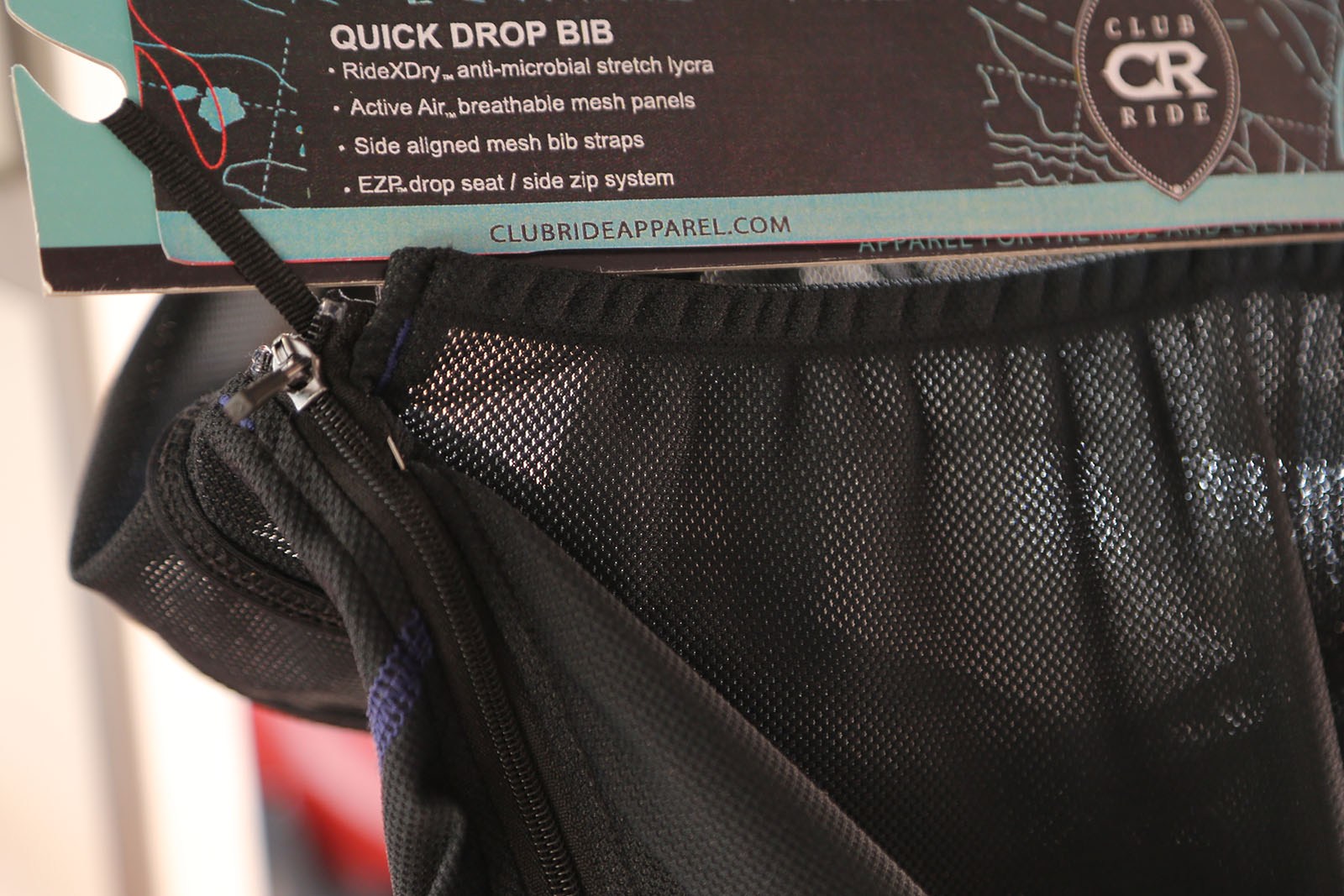 I rode both days in two different pairs of their undershorts with chamois; one was a full length bib-style short and the other just a regular boxer brief style. The chamois vary in thickness, distinguished by labelling that specify suggested riding times: 1 hour, 2 hour, 3 hour and 4 hour. The 1 hour chamois is thick enough to provide comfort for your commute to work or during a lunch time rip, but thin enough that it doesn’t feel like a diaper during the rest of your day. The same hour-based chamois thicknesses are in the women’s selection, as is a very nice level of elegance (the one hour chamois is designed into what look like regular women’s underwear). The pic above shows off one nice detail: a zipper on the side of the bib lets women make a nature call without having to completely undress. aka EZP. 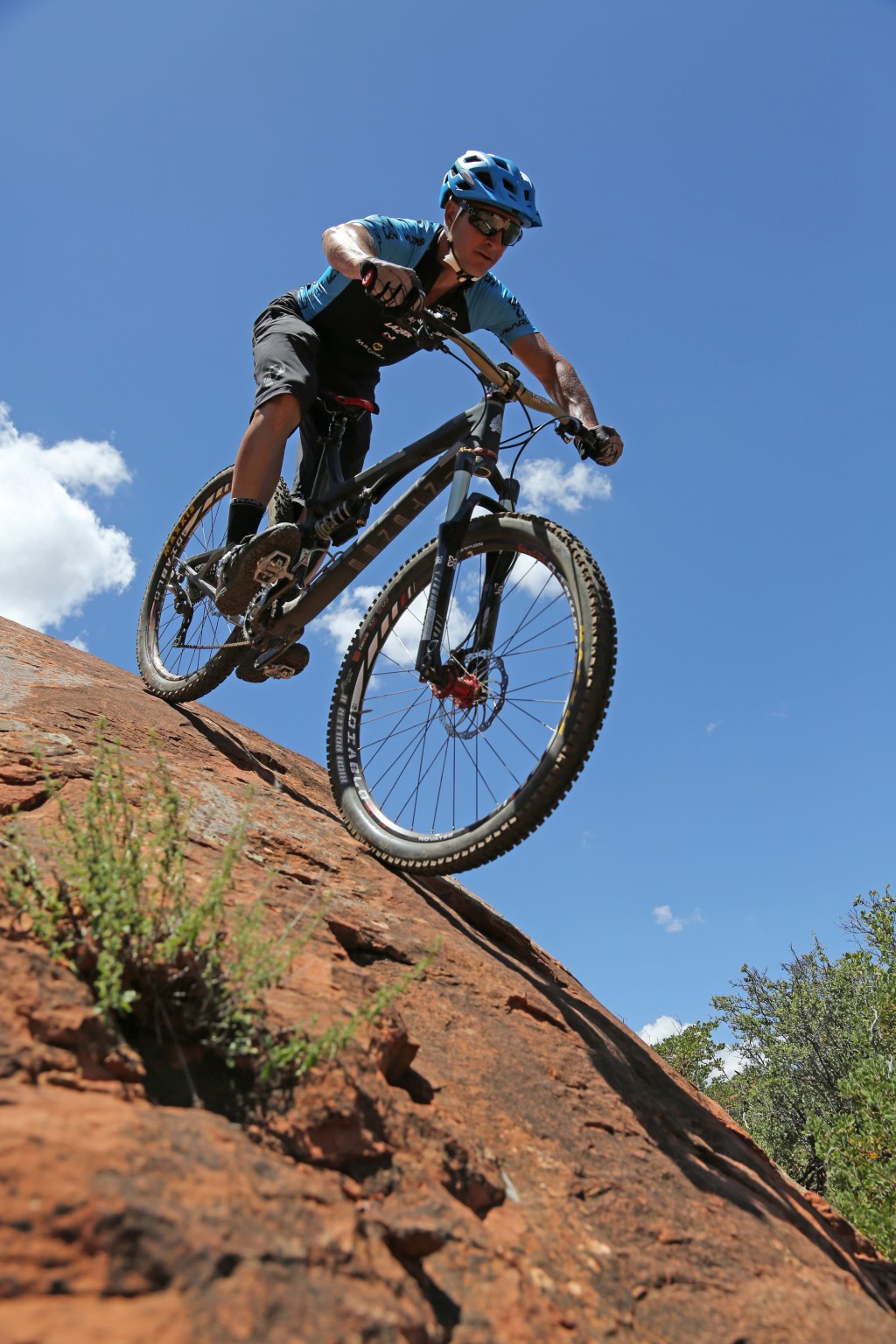 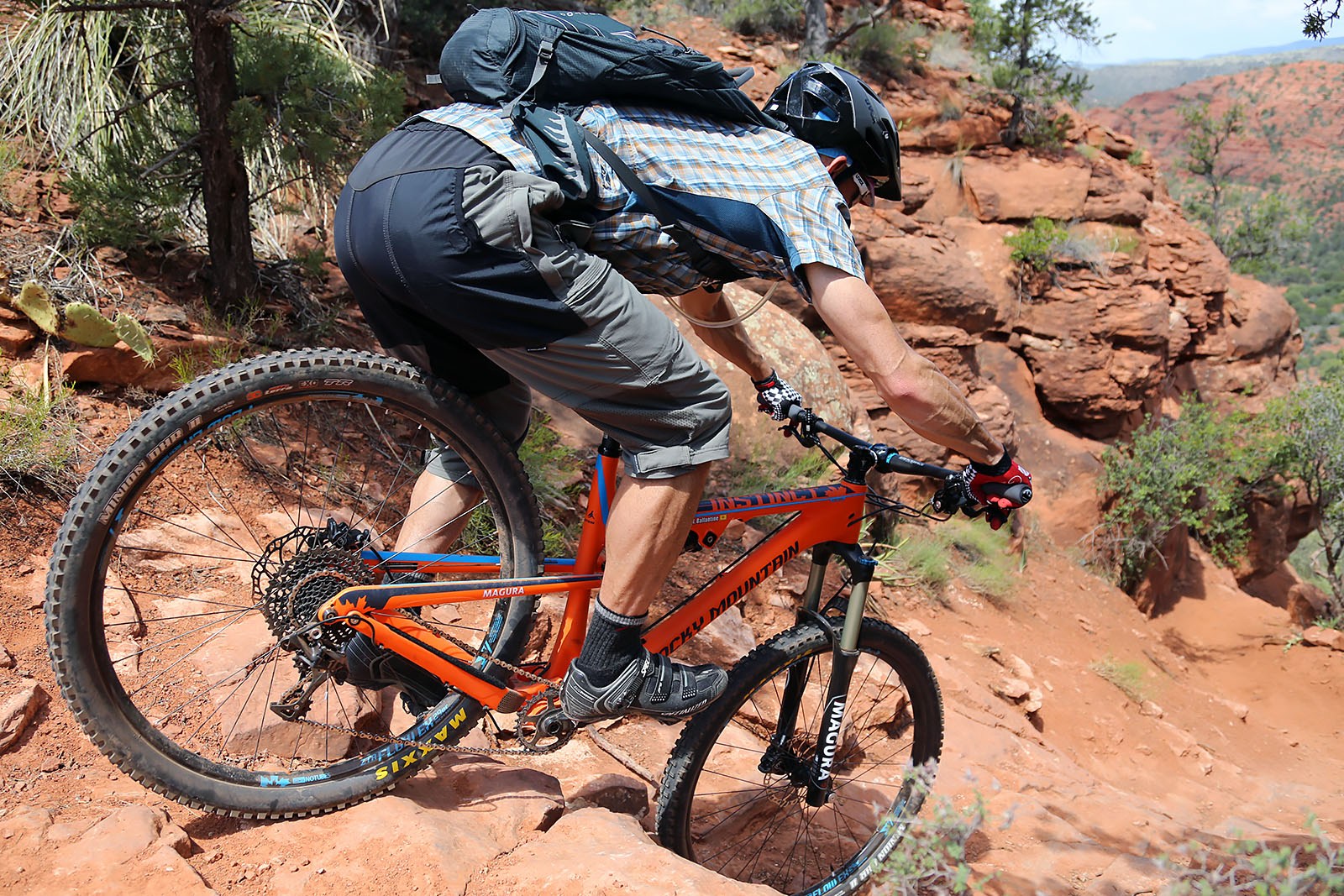 Magura’s own Tony Ballantine rolling into a super fun steep and dusty chute on one of my favourite trails, Highline. 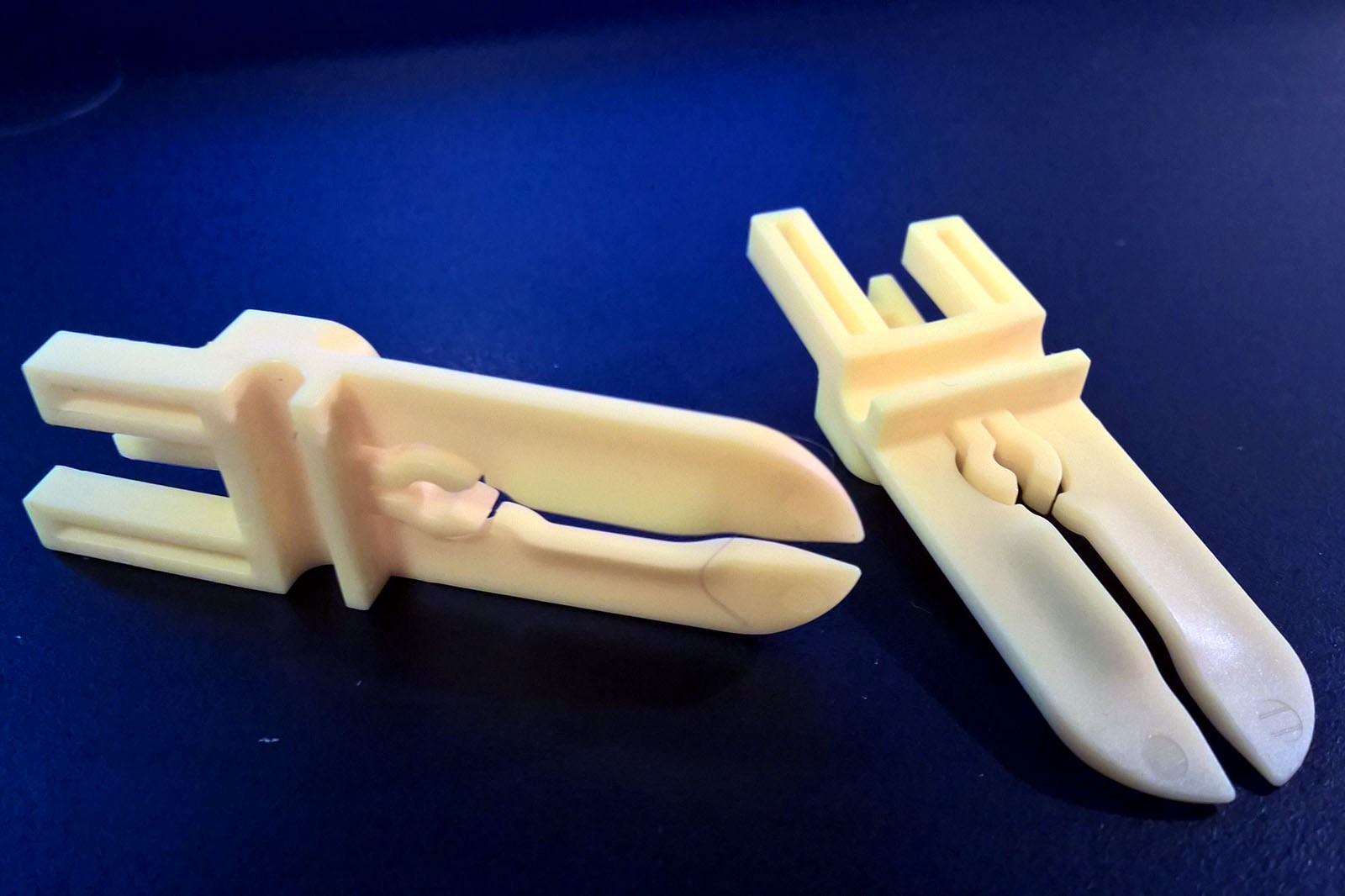 Little Yellow Tool: lots of functionality – transport device to keep the pads pushed out, pad spreader, calliper alignment using the 3 prongs to hook onto the rotor and the other end in the calliper (pads removed), 10mm thick part replaces pads during a bleed and ensures the right amount of mineral oil can go into the system, hydro line holder while inserting the high pressure barb, measuring pad wear when the pads are removed, or when they’re in the calliper. 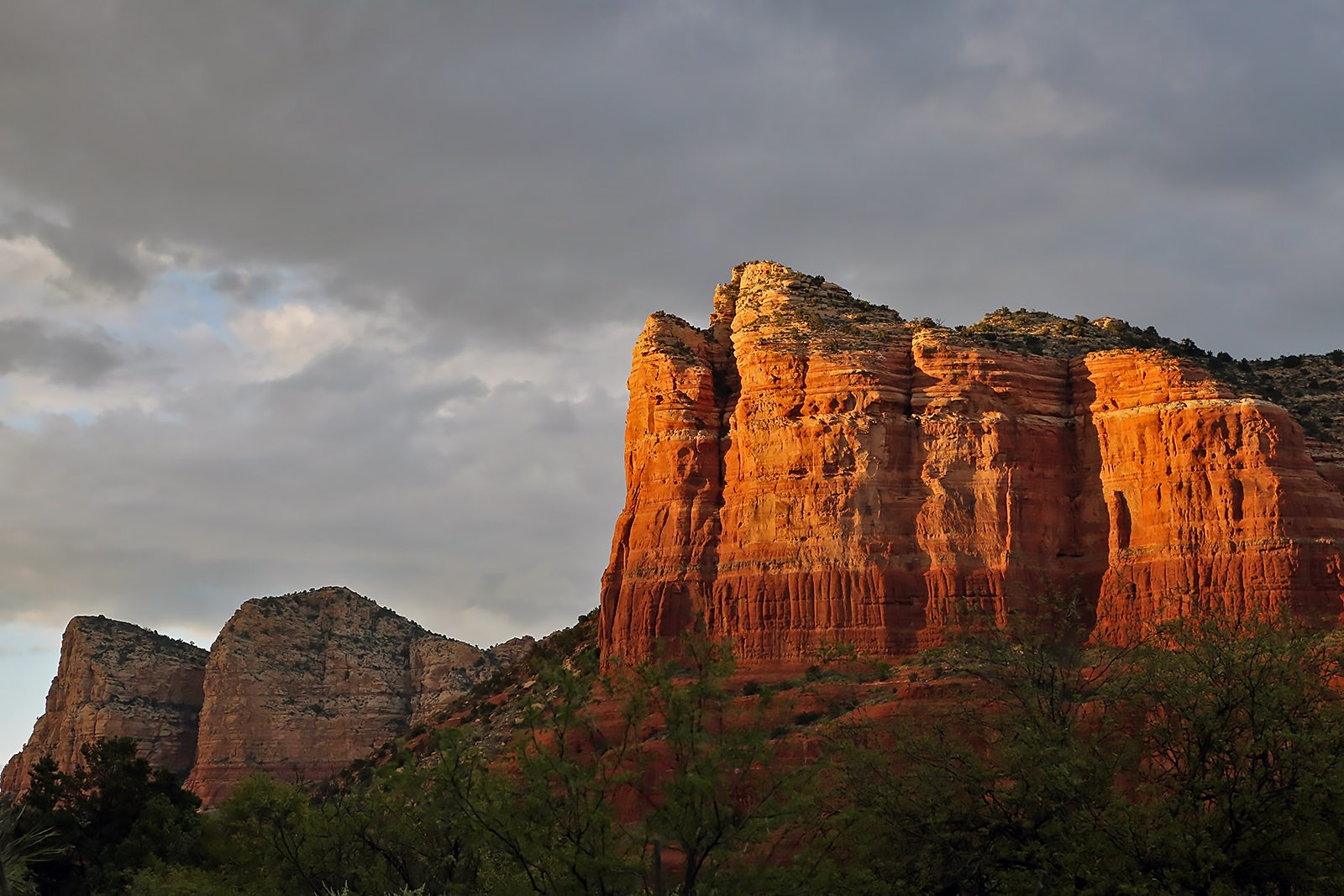 Sedona is worth the visit

Despite the friction, something positive is happening in Sedona, and by all accounts there is a movement to ensure that some of the adopted trails keep their technical attitude, which is great news for anyone wanting to ride there.
NSMB currently has two sets of Magura brakes being tested (MT5 and MT8) and we’ll publish our results once we have all the info we need.

Have you ridden Magura products?

Your writer is showing their youth here. Gustav was the disc brake. The top of the line rim brake to which he refers was the HS33… 😉

Thanks for the correction Rob, I could have sworn the Magura guys said "Gustav" and "rim brake" in the same sentence.

Sedona eh? Never heard of it. Several times this year.