Once the Stumpy 650 was announced earlier this year (check our review here) it became clear a 650b Enduro wasn’t far behind. The 26″ Enduro platform has been a hit since its arrival – and it’s one of my personal favourites. It’s the archetype; one of the best examples of a bike that combines excellent downhill performance with capable climbing. Short stays deliver responsive handling and the low bottom bracket helps it rail corners. Add in a slack head angle and you have a light machine that does a fantastic DH bike impersonation. In short it was a killer bike. May it rest in peace. I’ll be hanging on to my 26 inch version even after 31ers become all the rage. 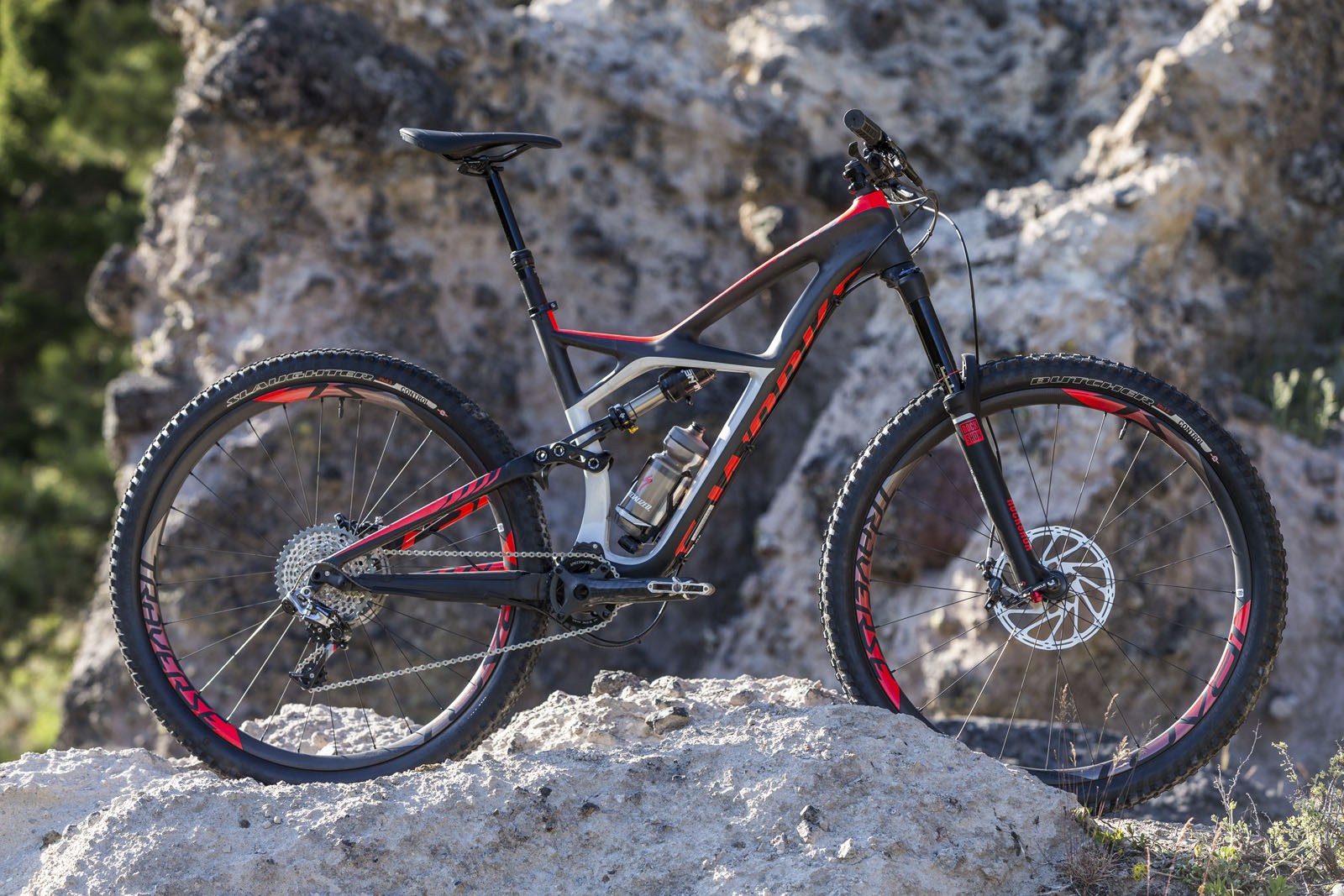 Is it a 650b or a 29? Without seeing the sizing on the tire it’s tough to tell, but this is the big wheel. The Henge saddle seen here was redesigned for 2015. Read about it here.

The 29″ version continued that tradition, shutting down the doubters who said long travel wouldn’t fly with big wheels. Specialized managed to keep the stays short (430mm 16.9″) and preserve much of the handling of the small-wheeled version. I first rode one during Crankworx last year on a Whistler trail called Bush Doctor. The line is a barrage of steep rock faces with nasty holes at the bottoms, and I had a harder time setting up for drop ins than I was used to. Some of the low speed stability of the 26 was missing. Lower down I had my best ride ever down Danimal because of the speed I was able to carry. The bike destroyed rooty sections and seemed to accelerate over chunder of any kind. I wasn’t about to trade in the lively feel of my 26, but the bike’s performance was beyond reproach. 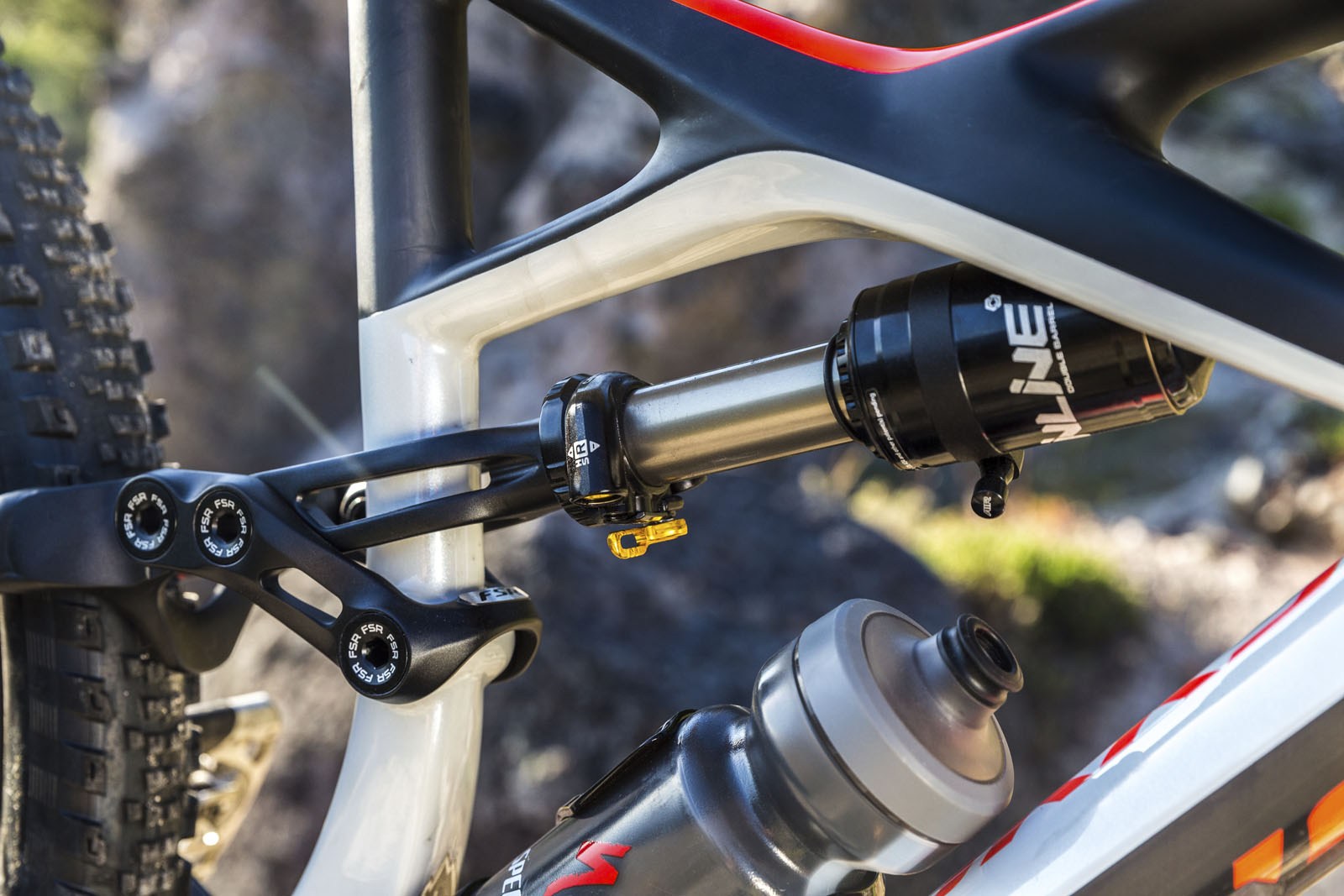 The Cane Creek Double Barrel Inline shock weighs up to 250 grams less than it’s piggy backing linemate. Performance, even on long descents, was solid. Small and large bump performance was impressive. The recommended tune for me provided the right balance between control and liveliness.

Back in June I rode the 29er version again before I got to the fresh 650b model. If you’ve been following along you’ll know that Specialized opted to use the 29″ front triangle for the Stumpy 650b to get the bike to market ASAP. They took a similar approach with the Enduro 650b but opted for the 26″ version’s front end to go with a brand new swingarm. Of course that will raise eyebrows once again. The conventional logic seems to be that there must be a compromise, that this bandaid solution can’t deliver the performance of a bespoke 650b front end. 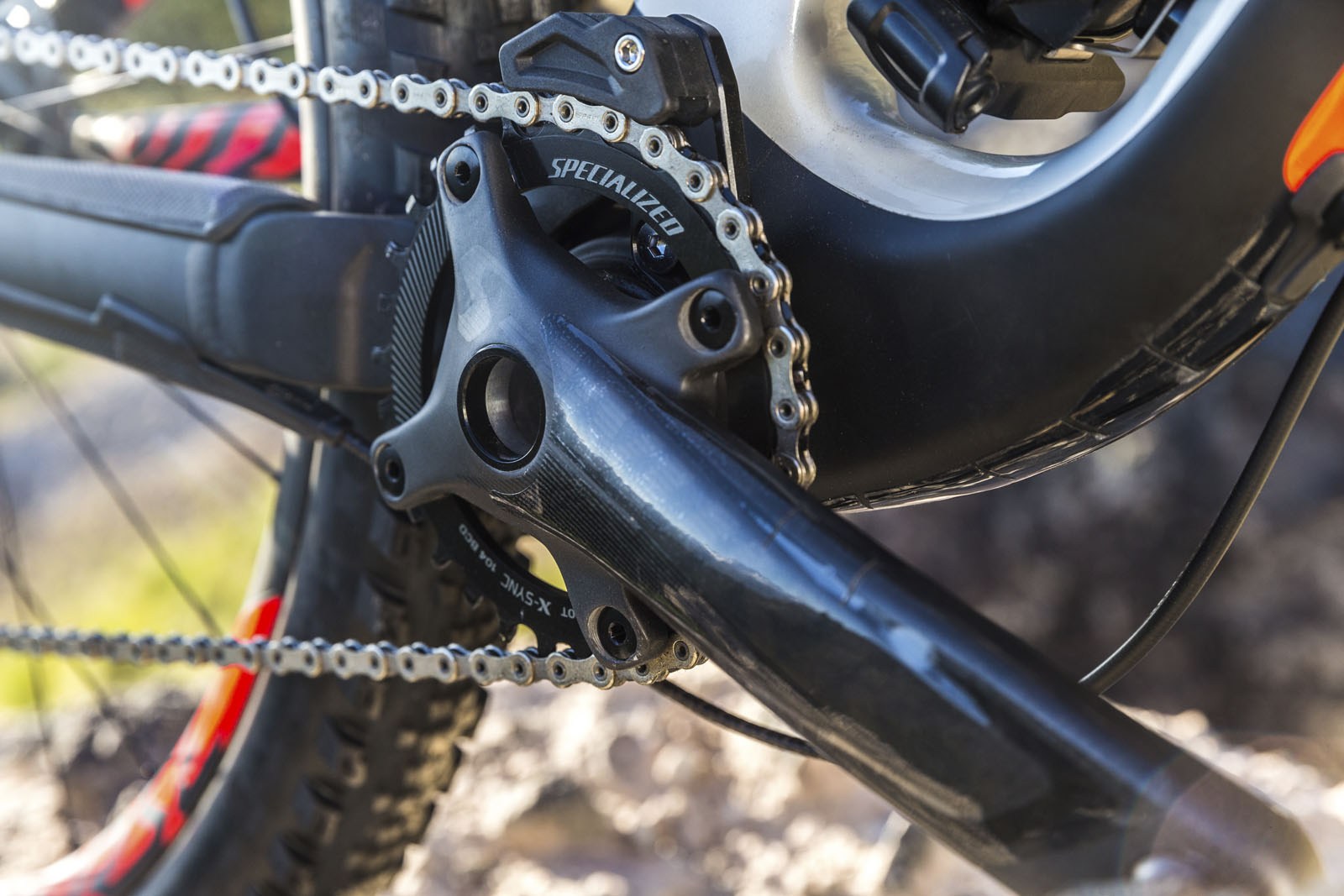 A well-kept secret is that Specialized makes some of the lightest cranks around. Until recently they didn’t find their way onto bikes for burlier riders. On the rear you’ll notice the new Specialized Slaughter tire, designed as a fast rolling tire for gravity applications. Read more about the tire here. The familiar Butcher is up front.

The numbers tell a different story. The bottom bracket height is 1mm higher than the 26″ model from 2014 and the chainstays are a mere 3mm longer despite the larger wheel. A surprise is the headtube angle which loses a full degree over the 26er to 65.5, two degrees slacker than the 29. As Specialized engineer Jason Chamberlain told me “nobody ever complains about the bikes being too slack.” 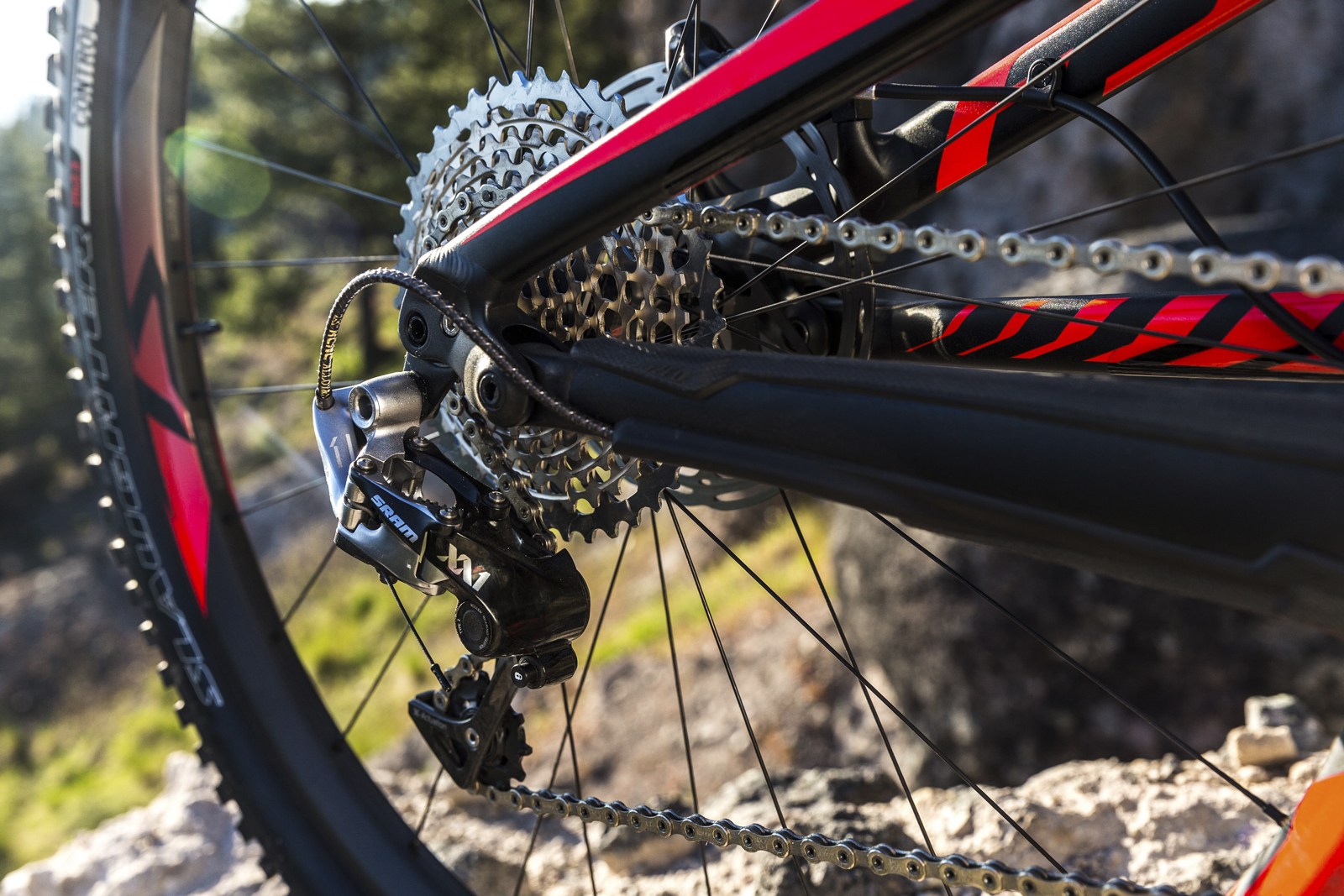 The new Roval Traverse Fattie SL wheels on both S Works Enduro models are a highlight. Traction and stiffness are maximized without weight penalty. Wide rims are the future. Check out our thoughts on the wheels here.

I specifically asked Jason about what might have been different if they hadn’t been under the gun. While conceding the goal was to get the product to market without delay, Jason felt they hit the sweet spot: “There really are no compromises. The geo ended up exactly where we wanted. If it didn’t we would have taken a different route get there.” 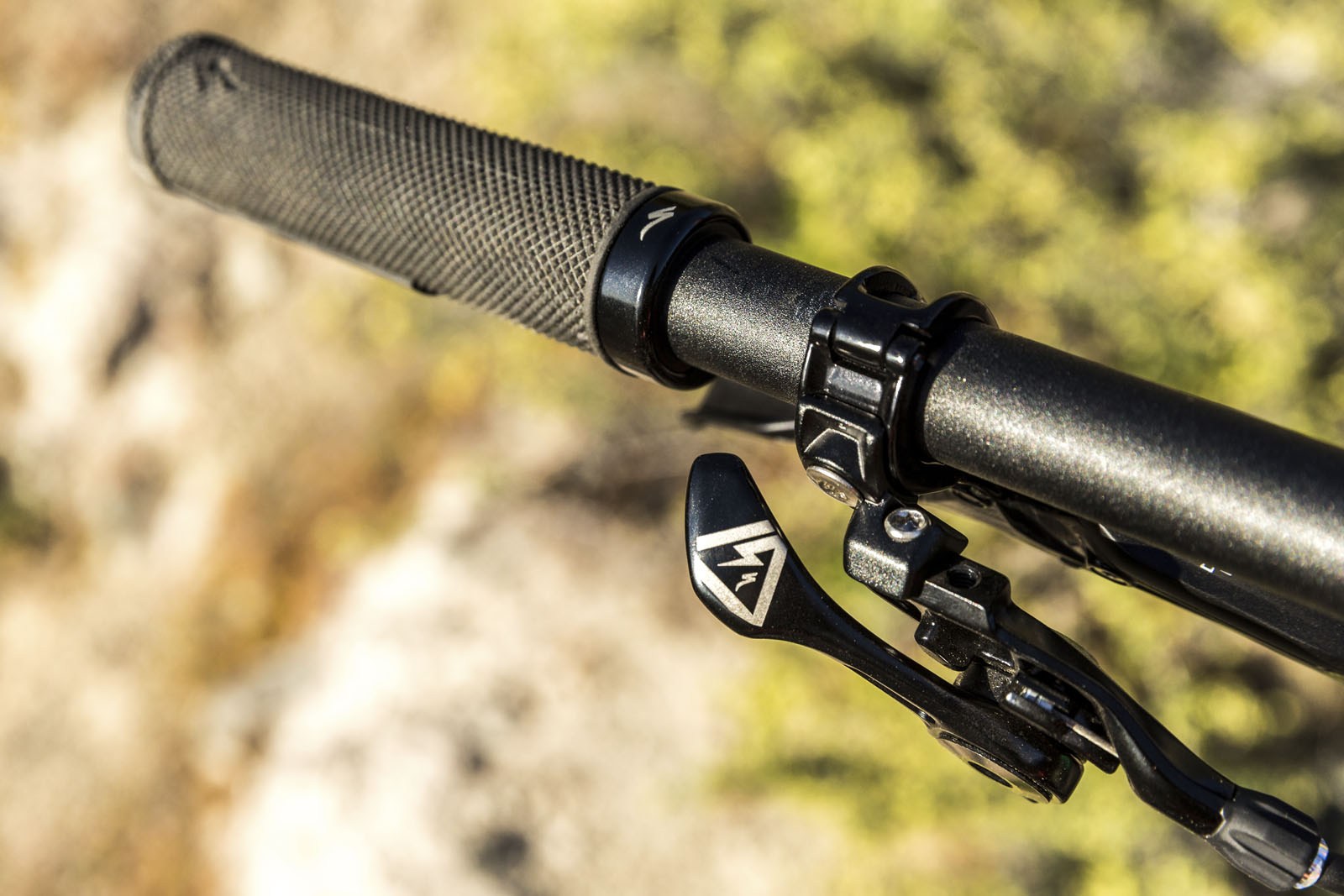 One of the best innovations on the bike was the new lever for the Command Post. It uses the SRAM Matchmaker and sits tidily where your front derailleur lever would be. This is by far the best dropper remote I’ve used.

On the first day in Hood River I was on the 29er Enduro. We descended the Dog River trail a couple of times; six and a half miles in length with one mile of climbing mid way. Much of the ride was high speed bench cut but there were some steep and bony sections as well. It was a great trail for the long-legged Enduro 29er. On the second run my confidence had grown and the bike was right there with me. I was impressed with the SRAM Guide brakes and everything about the bike felt right. Perhaps not lively and flickable but fast and capable. 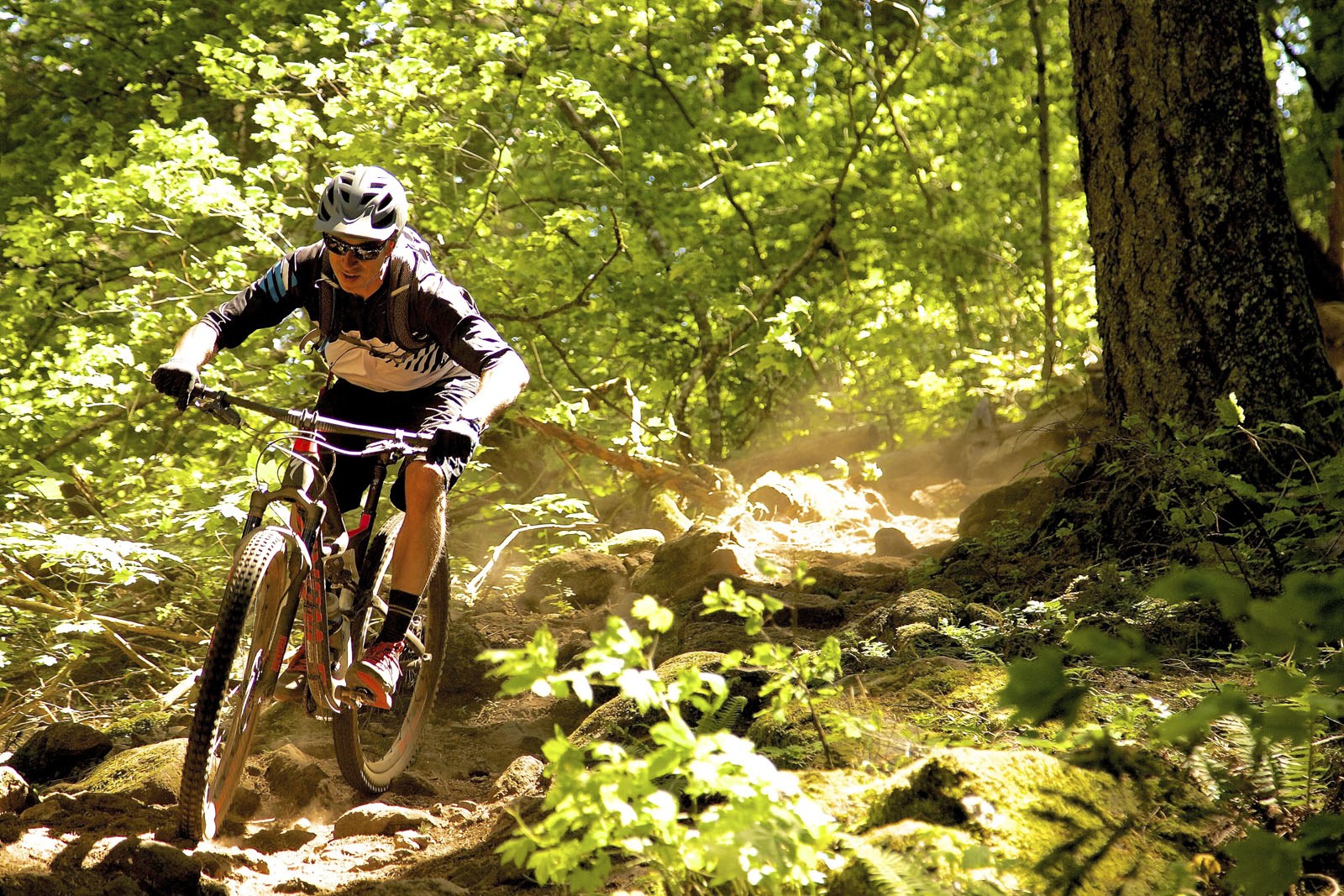 This was just before a moment when I should have been ejected into the rhubarb. Instead the bike saved my ass. Photo – Ryan Cleek

On the second day we did long descents at Post Canyon. The riding was a blast with everything from deep swoopy berms to pucker-inducing chutes. There were some small air opportunities and large helpings of fun on each section. Post Canyon on its own is a worthy destination for a riding road trip and it’s a small fraction of the riding near Hood River. Things were a little dusty but the trails were in great shape and traction, for the most part, was good. 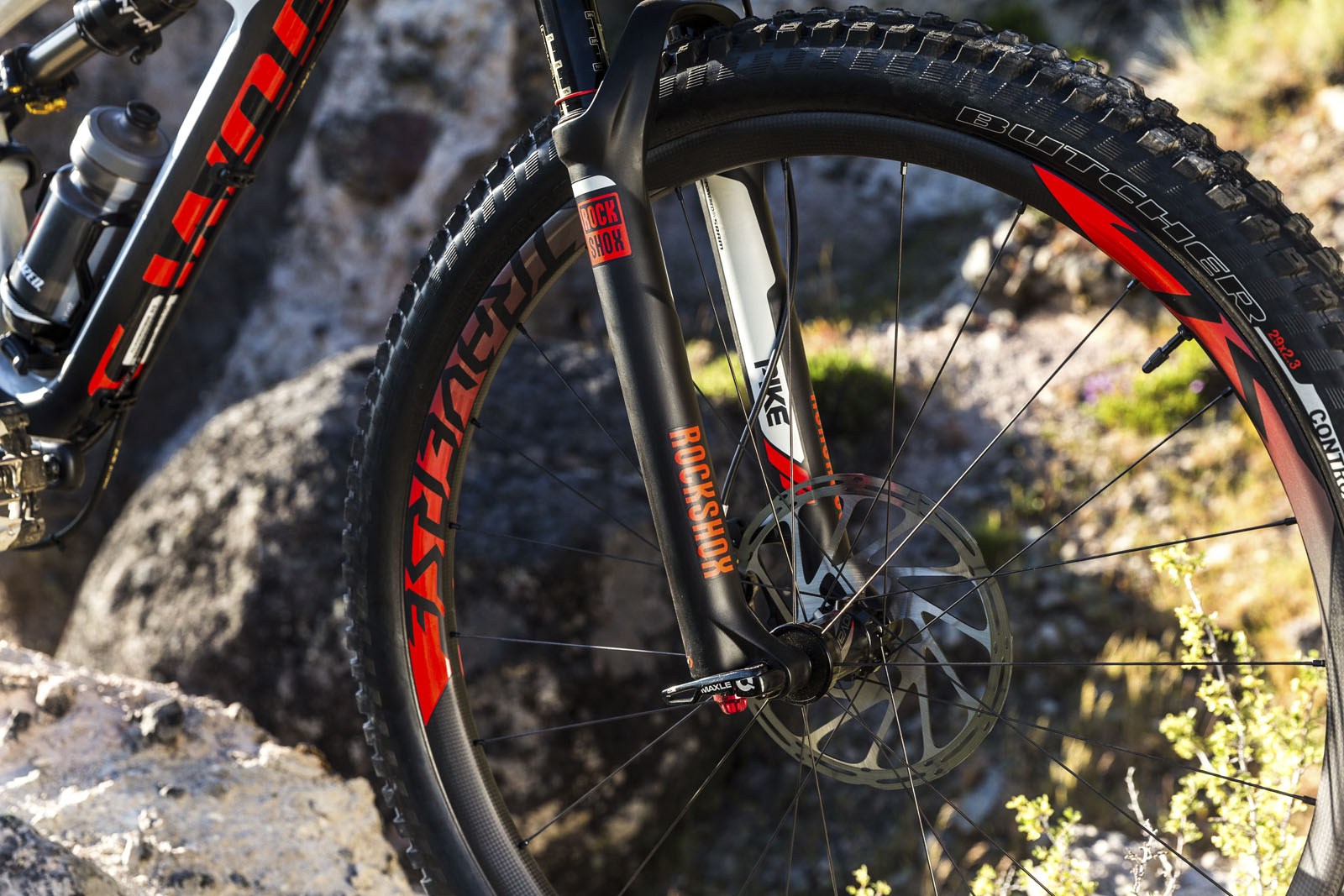 Aside from wanting a wider bar and shorter stem, I couldn’t find fault with the spec. The Pike up front can’t be argued with either. More thoughts about the Pike can be found here. You also get a SWAT bottle cage and bottle with a multi tool included.

Alan Muldoon from the UK’s MBR magazine agreed to switch bikes with me for the last descent. Thanks Alan! Having a second look at these trails surely helped my mojo, but not enough to explain the widening grin on my face. The biggest difference with the smaller hoops was that the bike began to dance. Once I figured some things out and got off the brakes I could let the bike move freely beneath me at a decent clip, a feeling that eluded me on the big wheeler. After about ten minutes I felt like I’d been riding it for months.

Trim Levels
There will be four spec choices from S Works  down to Comp with the top two models featuring carbon frames. We’re waiting for pricing information and hope to be able to updated you shortly. 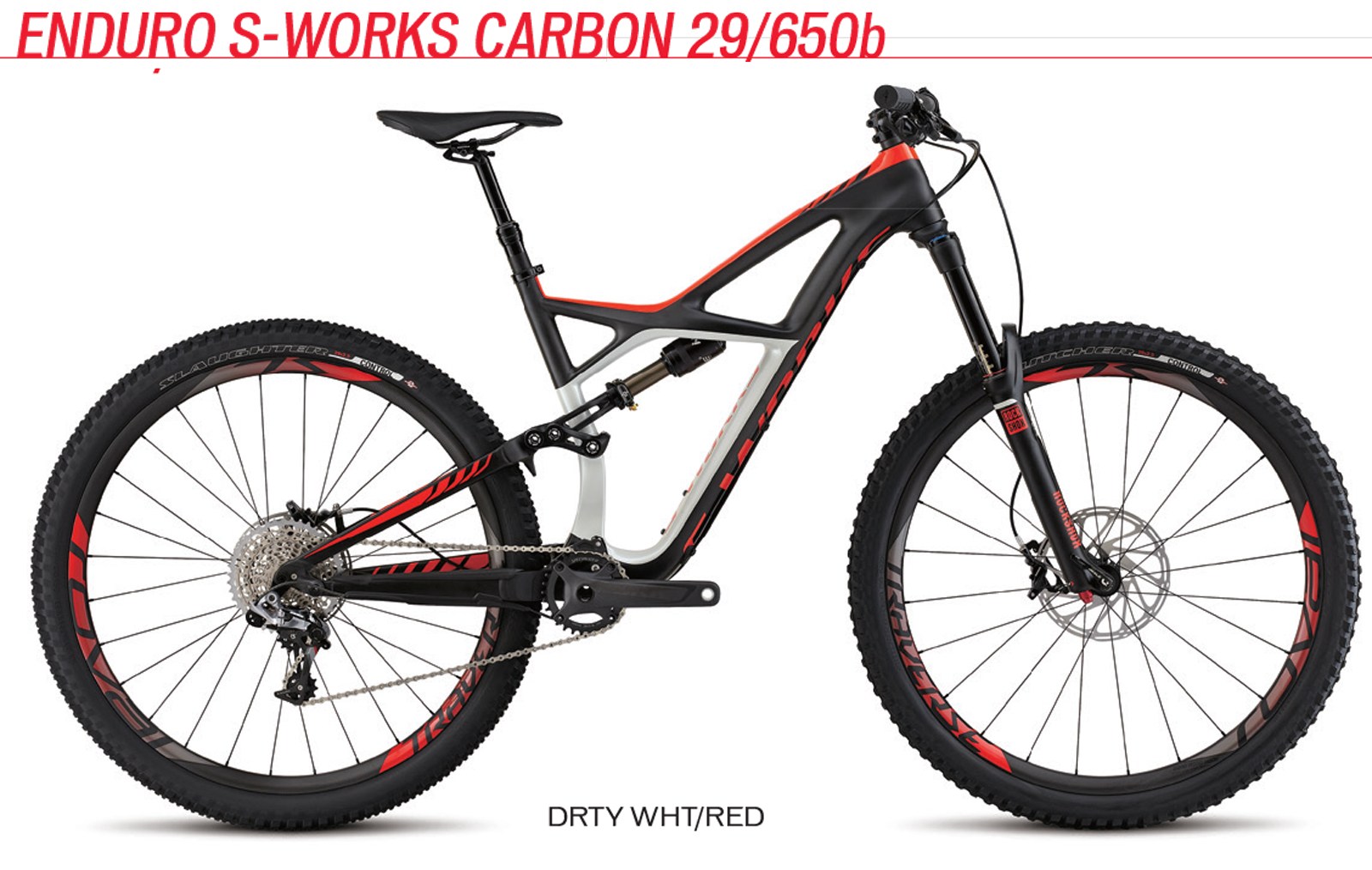 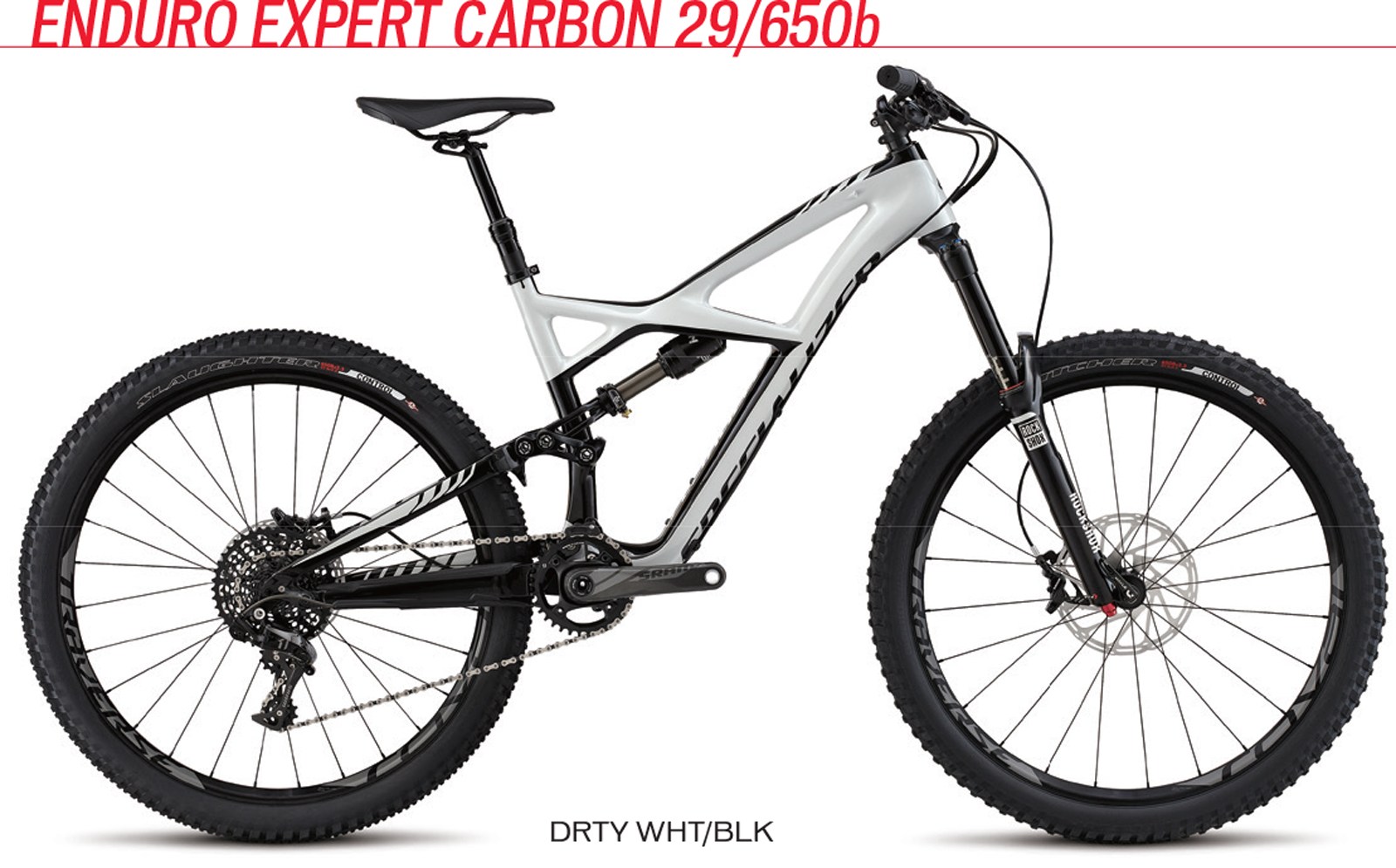 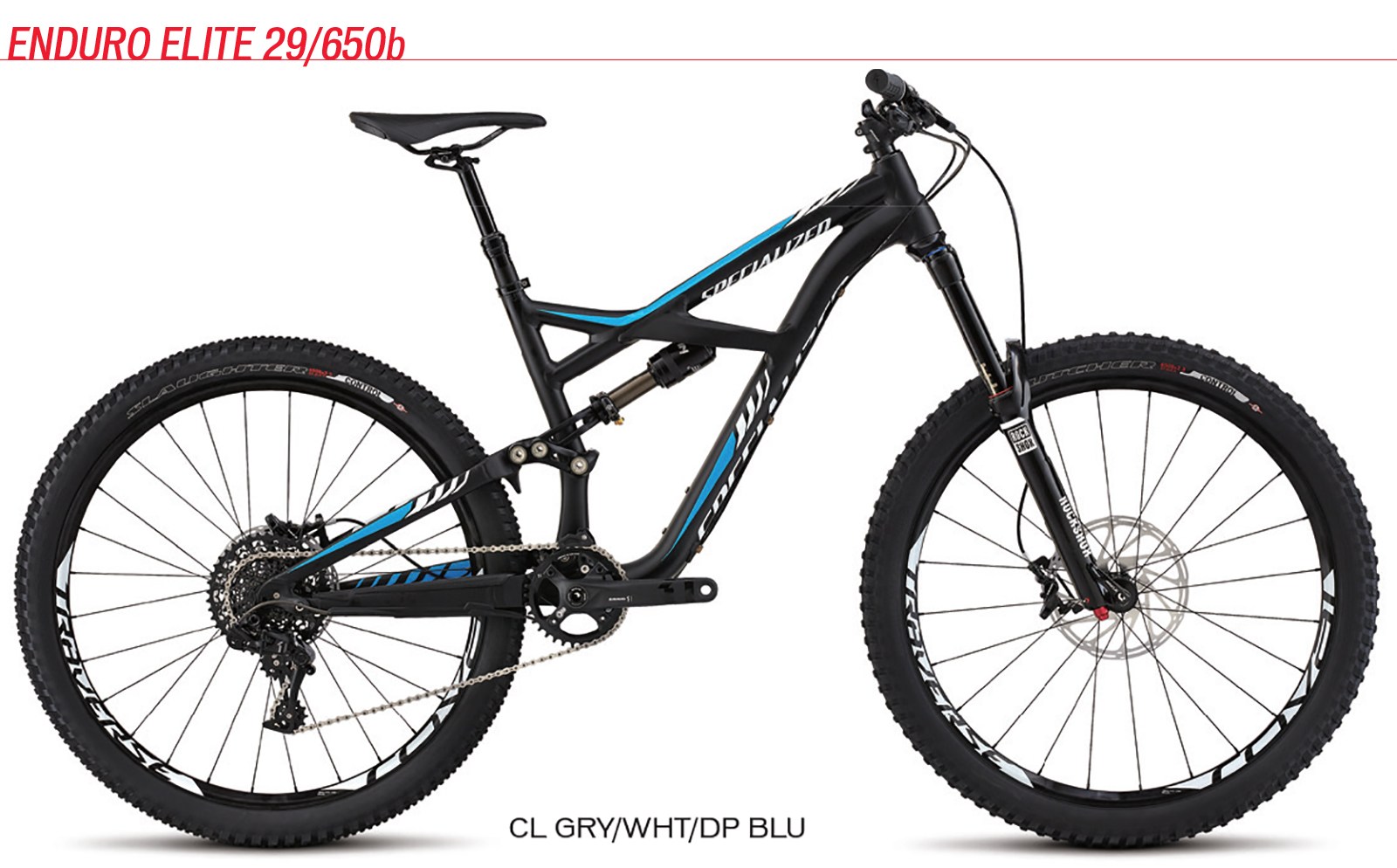 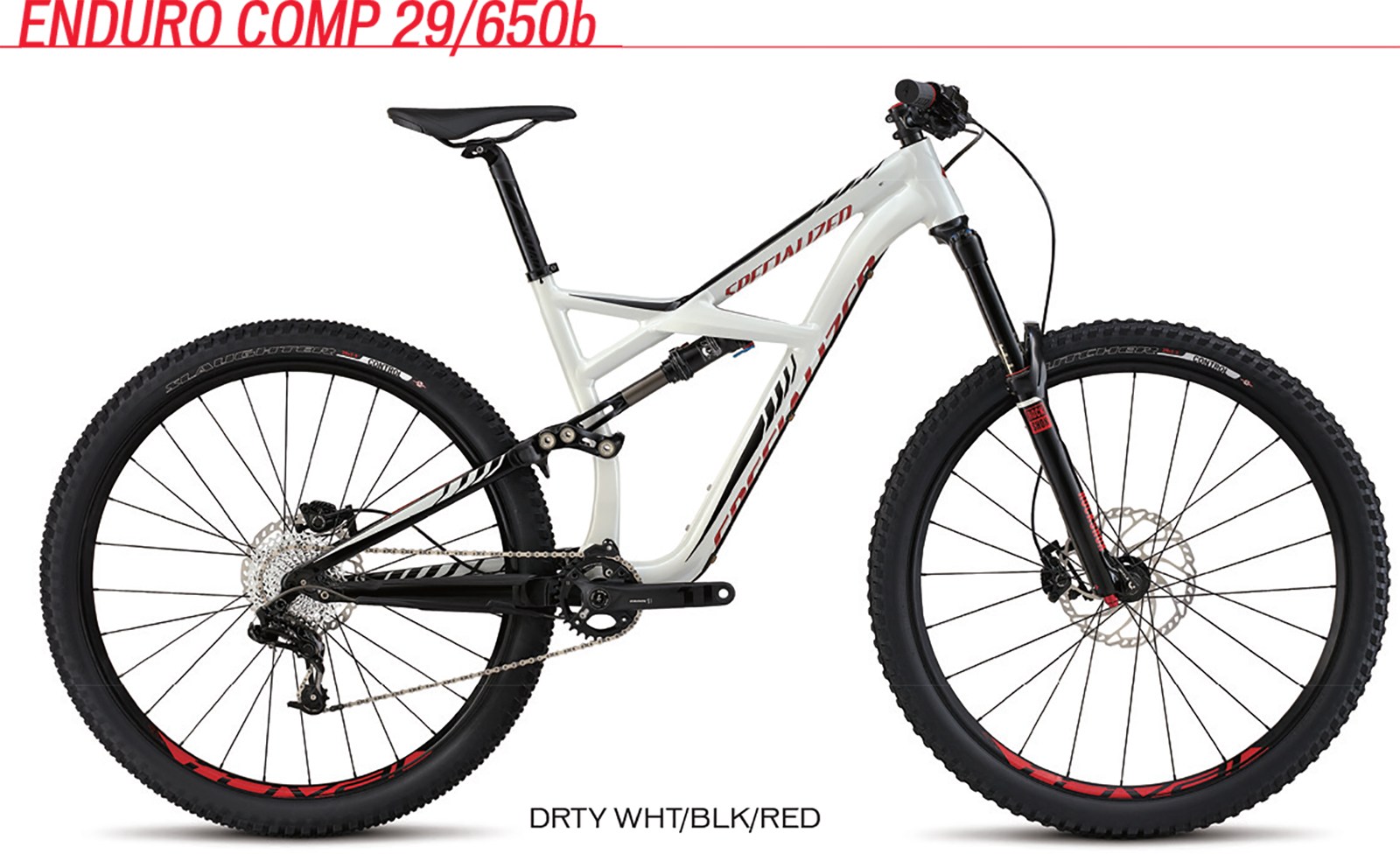 The internet has been quick to criticize the co-opting of existing front triangles to get the Specialized 650b models to market. The conventional argument is that there must be compromises with this approach. Certainly much of this backlash has to do with Specialized’s previous reluctance to the get into the mid-wheel market, along with their public claims that performance gains of 650b over 26 were too small to justify implementing the size in their line. Despite the popular line my brief experience on the 650b left me with no such misgivings. The numbers of the bike are great and they add up to a bike I’d be happy to find under my Xmas tree. Sizes in the 650b model are small, medium and large. In 29 you can get a medium, large and extra large.

Is this the Enduro you’ve been looking for?

Boy do they have THIS one wrong.
I just looked at one at my LBS today, and while the bike DOES come with X1 cranks(which are no different than any other aluminum crankset with one sprocket), it comes with an X9 derailleur, X-SEVEN shifters, Deore brakes, and the crappy Fox no-rebound-piston, and no boost-valve Evolution shock.
Something else I noticed on the '14s that has also carried over to the '15s.. You pay almost SEVEN-GRAND for a bike, and you STILL don't get the Pike RCT3. You get the same Pike RC that comes on the Comp.
As far as the $5k 'Elite is concerned, there's no bargain there.. You get the bottom-barrel X1 drivetrain and Guide(complete with the old Trail 9/X0 Trail calipers) brakes. I graduated from T-9's to Saints, and I'll NEVER switch back. Saints have WAY better feel and control than the Avid's(sorry…now SRAM). IMO if you're gonna buy a '15 Enduro, buy the Comp and spend the money on a REAL dropper post,, X01/XX1 d-train, and Shimano brakes. Even if you can't stomach the cost of the Saints, ZEE's are half the cost and are basically the SAME package, sans contact adjustment, which is something I nor anyone else I now with Saints actually use.
-OR- buy the much MUCH better looking 2013 GREEN 26″ Enduro, and if you decide you wanna try the 27.5's, buy the '15 Swingarm and a set of Fox Float 36's for 27.5's(or a Pike if you prefer). But at ONLY +3mm, why not just stick a 27.5″ wheel on the 26″ swingarm? I had a '13 Enduro 26″, and had PLENTY of tire clearance, and that was running a Minion 2.5″ in the rear. With that in mind, I have no doubt you could run a 2.3″ 650b Butcher/Purgatory/Slaughter with PLENTY of mud clearance.
If you want to experience an Enduro with bigger wheels, BUY THE 29er! You'll have a bike that is 110% Spec. Enduro, and you'll have big enough wheels to where you WILL reap their benefits(floating over rocks/roots/ruts, and carrying more speed while doing so).
My personal opinion is a 27.5″ is just a heavy 26″. I've ridden several 27.5's(Intense 275, Stumpy 650b, Remedy 9 650b), and they didn't really feel any different than a 26″. Taking a 29″ Enduro down my favorite run/chute(more exposed rock than dirt, and a chicane through a HEALTHY rock-garden) however, netted me a 2-second quicker run than my previous best on my 26″ Enduro.
I'm just hoping people STOP buying into all the marketing BS the manufacturers have been shoving down our throats to get us to buy new bikes every year as of late, or at the very least, 26″ components will not longer be made/sold, and soon the 28″ wheel will come out, and you'll no longer be able to buy wheels/tires for your existing(insert your current wheel size here).

Took delivery of my 2015 S Works Enduro 650B last Wednesday with the Pike RCT3 fitted, thanks.

IMO, from behind a keyboard and not the bars of this bike, they should have kept the HA @ 66.5, especially in light of the slightly larger wheel (which in theory should allow one to tighten up the HA relative to the 26er).

so the 650b enduro is slacker than the 26″ was, but the bb is pretty much the same? interesting. on paper that's a more successful retrofit design than the stumpy's

also, i think the parts list for the comp is wrong? looks like a fox ctd in the picture, but its listed as coming with a cc inline. still, looks like a killer value spec. i'll be interested to see the price

The S-Works model doesn't get the carbon version of the Traverse wheels?
Does the Blacklite post only come in 125mm?

It does get the carbon wheels. I copied and pasted the spec comments and there were a few errors. Not sure if there is a 150 dropper.

Nice to see them offering a higher spec alloy version.