Touting some of the lightest (if not the lightest) trail bikes on the market has its advantages, but tell me as much as you want about how Europeans ride their bikes and I’m still not buying in to overstretched forks. In putting the 2015 Fox 36 on the 170mm Genius LT, Scott has dispelled my concerns with a noodly front end – which lets me dig in to the goods without having to dance around a fork I just can’t get behind.

Beyond the fork update, the Genius LT has seen a number of refinements that help Scott keep the bike light as all hell yet improve the ride and performance. A new shock tune complements the damping change up front, while an updated carbon layup has the 2015 Genius LT 700 tuned tipping the scales below the weight of the model it replaces – even with the new fork. Scott claims 2450 grams for a medium frame with shock and 26.6 pounds for the complete bike. 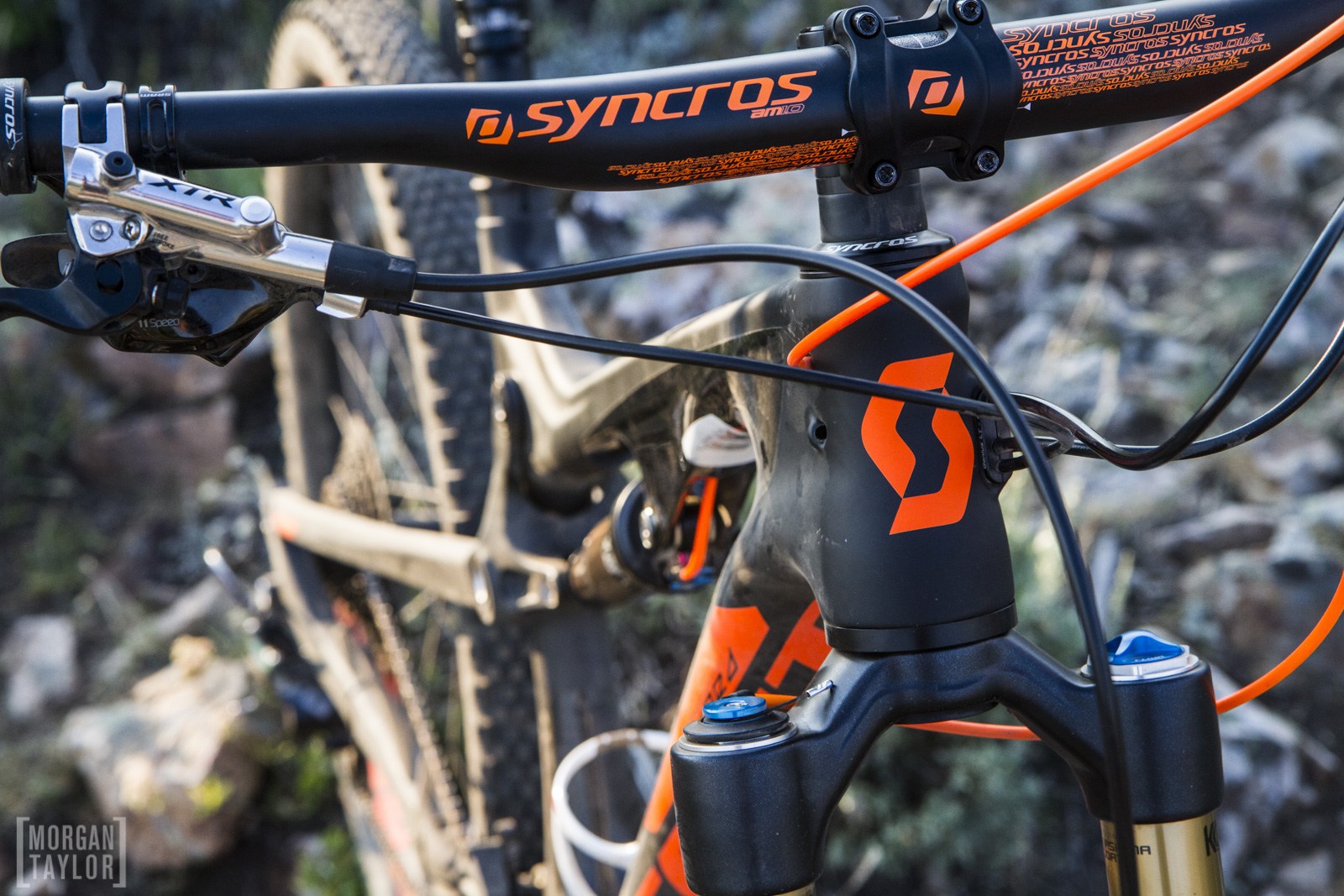 Scott has continued with the sharp orange decals and raw black carbon from last year, and it looks gooood.

Jumping on the LT I couldn’t help but notice just how light it feels for the amount of travel it boasts. Despite the relatively slack 66.3º head angle and Schwalbe Super Gravity tires, the front end of the Genius LT was downright snappy. Scott specs the small and medium frames with 50mm stems and the large with a 60, and the top tube lengths are long to complement. The LT rides high in its travel, but you will use all of the travel. While the fork is a major improvement, the Genius still rides “smaller” than its travel numbers would suggest, the counterpoint of a highly efficient pedaling long travel platform.

Scott’s TwinLoc remote suspension adjustment system is implemented here, giving an already light and decent-pedaling platform a major advantage on the ups. The Fox-made Nude shock is stickered “CTCD” with the usual Trail mode replaced with Traction Control. One click of the button puts you into TC mode with 110mm of rear travel, while another click all but locks out the suspension front and rear. I really appreciate this feature on the rear end, but giving up Fox’s excellent RC2 damping cartridge in the fork is a (fixable) loss in my opinion.

As expected, the top shelf Genius LT 700 Tuned model is spec’d with a finely curated selection of parts, from the 6″ drop 31.6 Reverb to XTR brakes to a X01 1×11 drivetrain. Complementing the major components is a finishing kit from Scott’s house brand, Syncros, with a new wheelset, upper chain guide, and a 760mm wide, 35mm clamp bar/stem combo. But enough of that. Let’s look at some photos.

Internal cable routing and a nice big head tube junction is what this photo is about, but it’s also worth noting that due to the lower axle-crown height of the new 36 (vs the 34 170 it replaced) Scott has added a spacer below the head tube to maintain geometry. 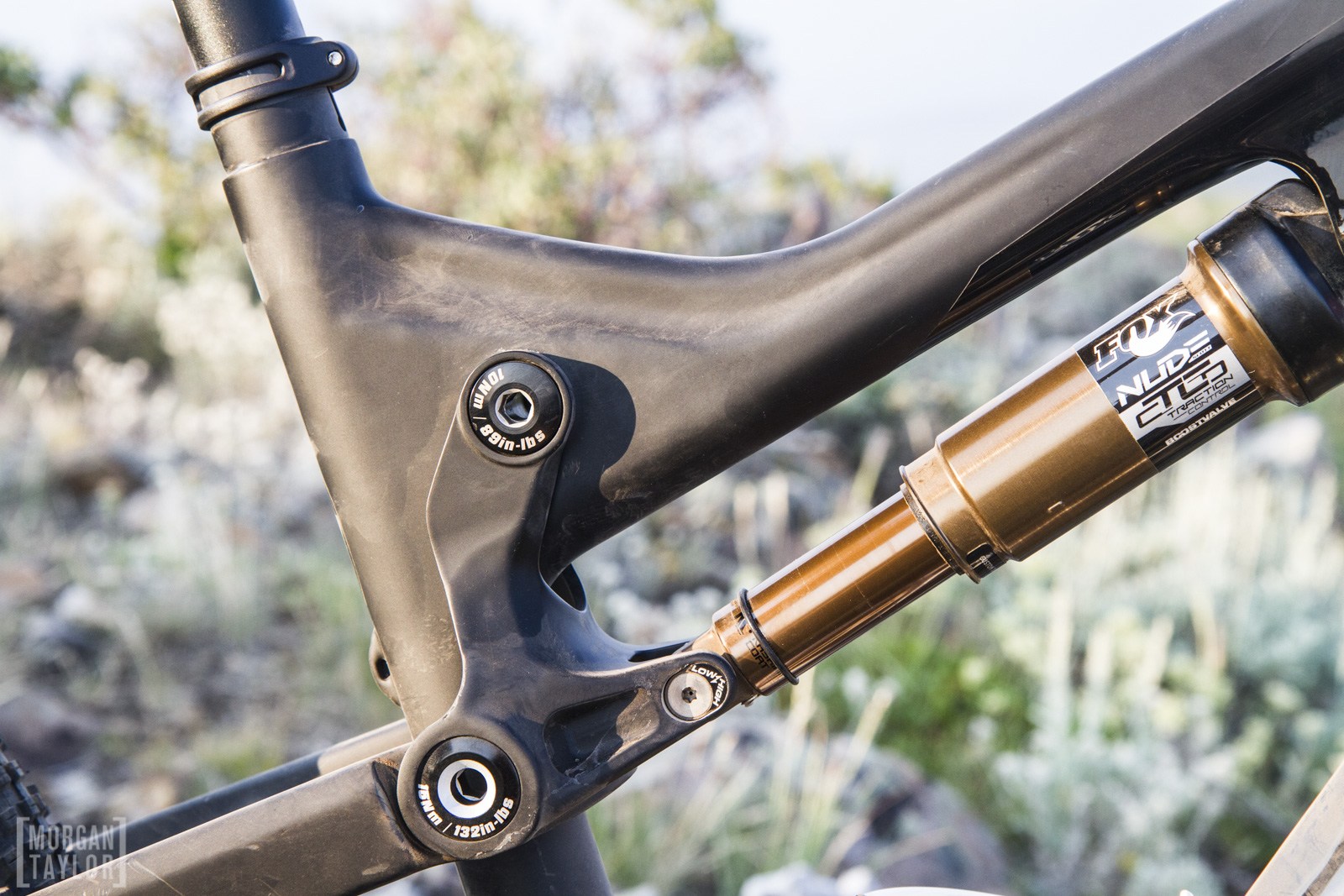 Raw carbon continuing. An interesting tidbit: Scott uses the same hardware across all pedalable full suspension platforms from the XC-oriented Spark up to the Genius LT seen here. This should in theory make finding hardware simpler if need be. 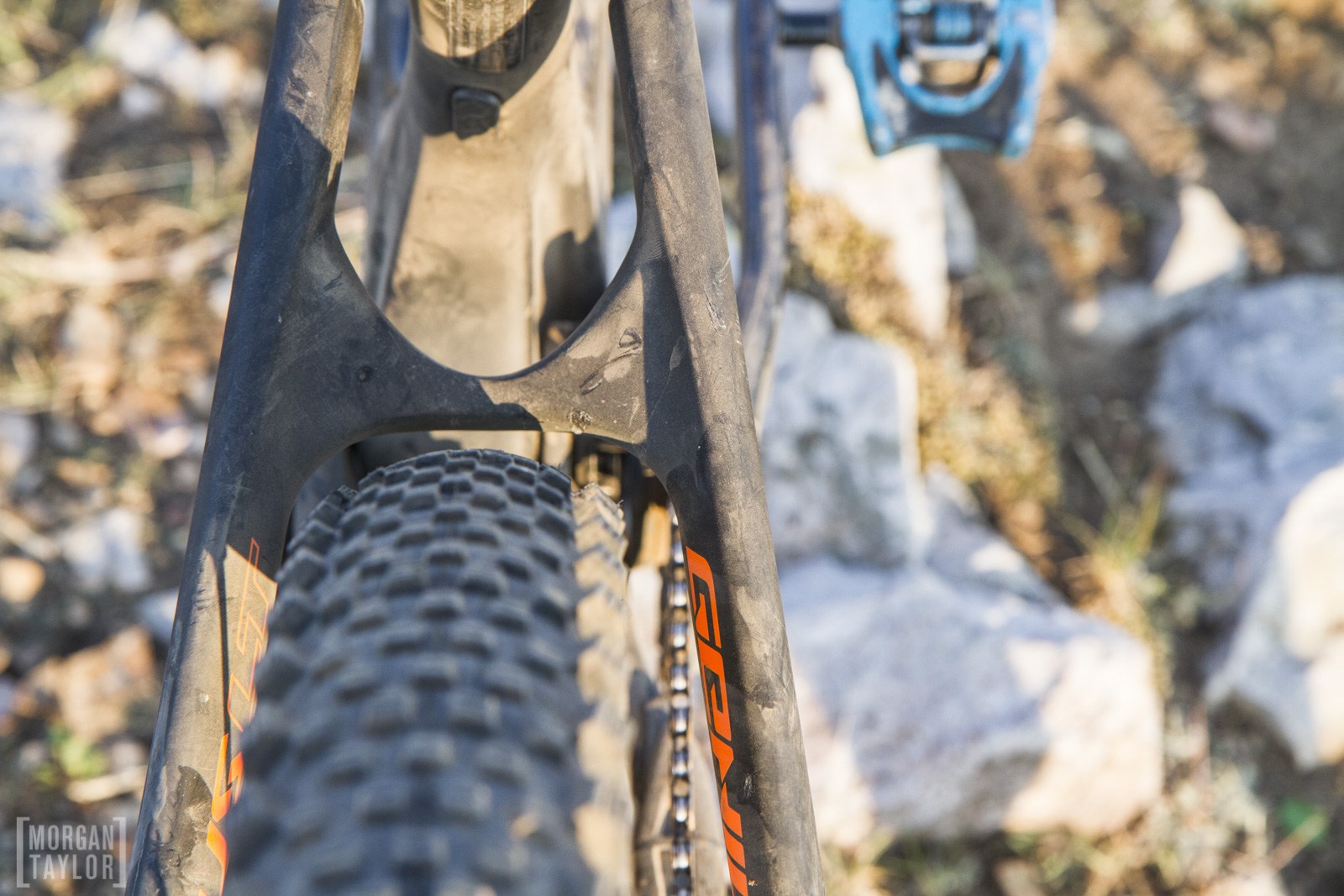 The seat stay brace is nicely integrated and no doubt increases stiffness out back. 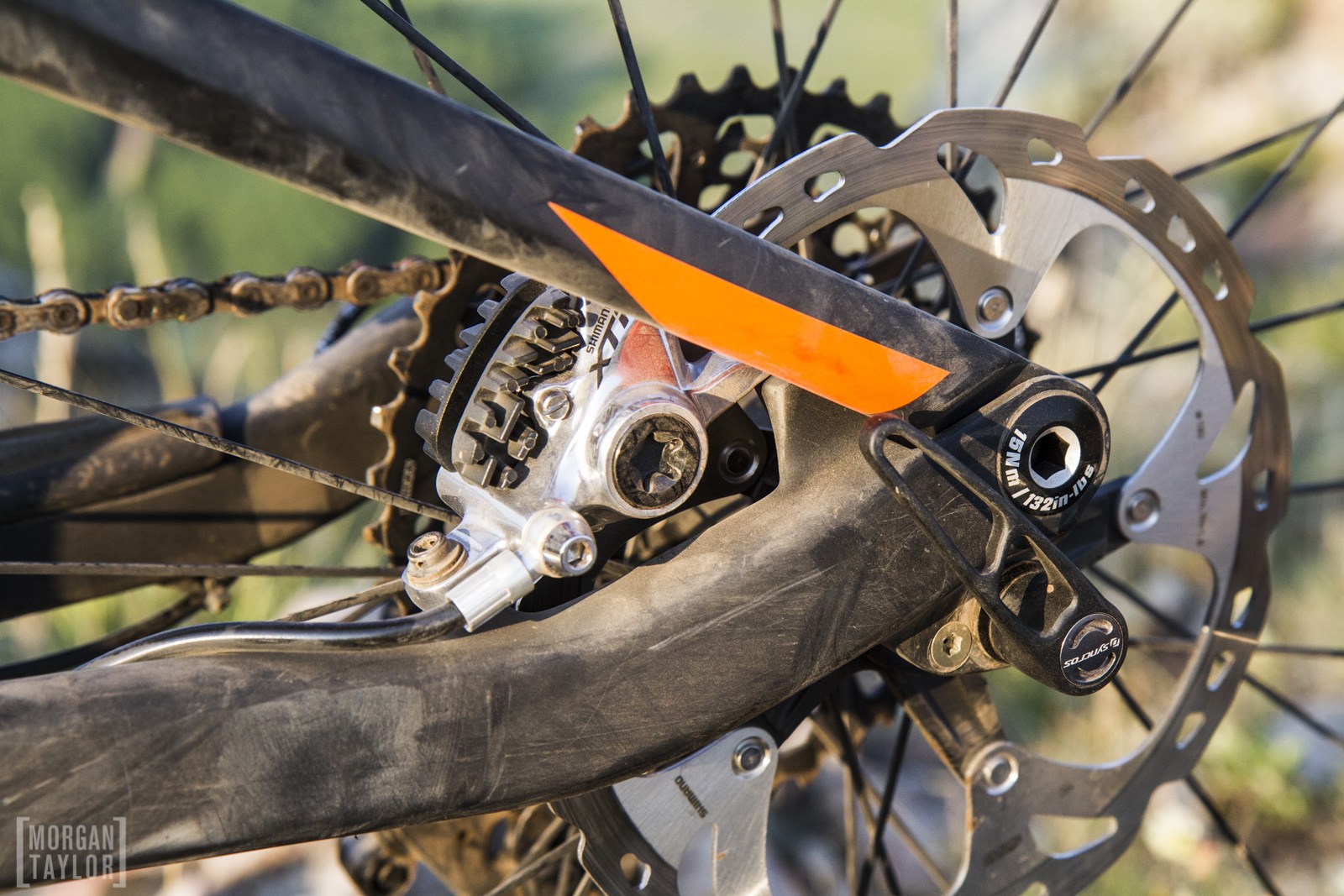 Scott is using a single pivot design with the axle just below the pivot. 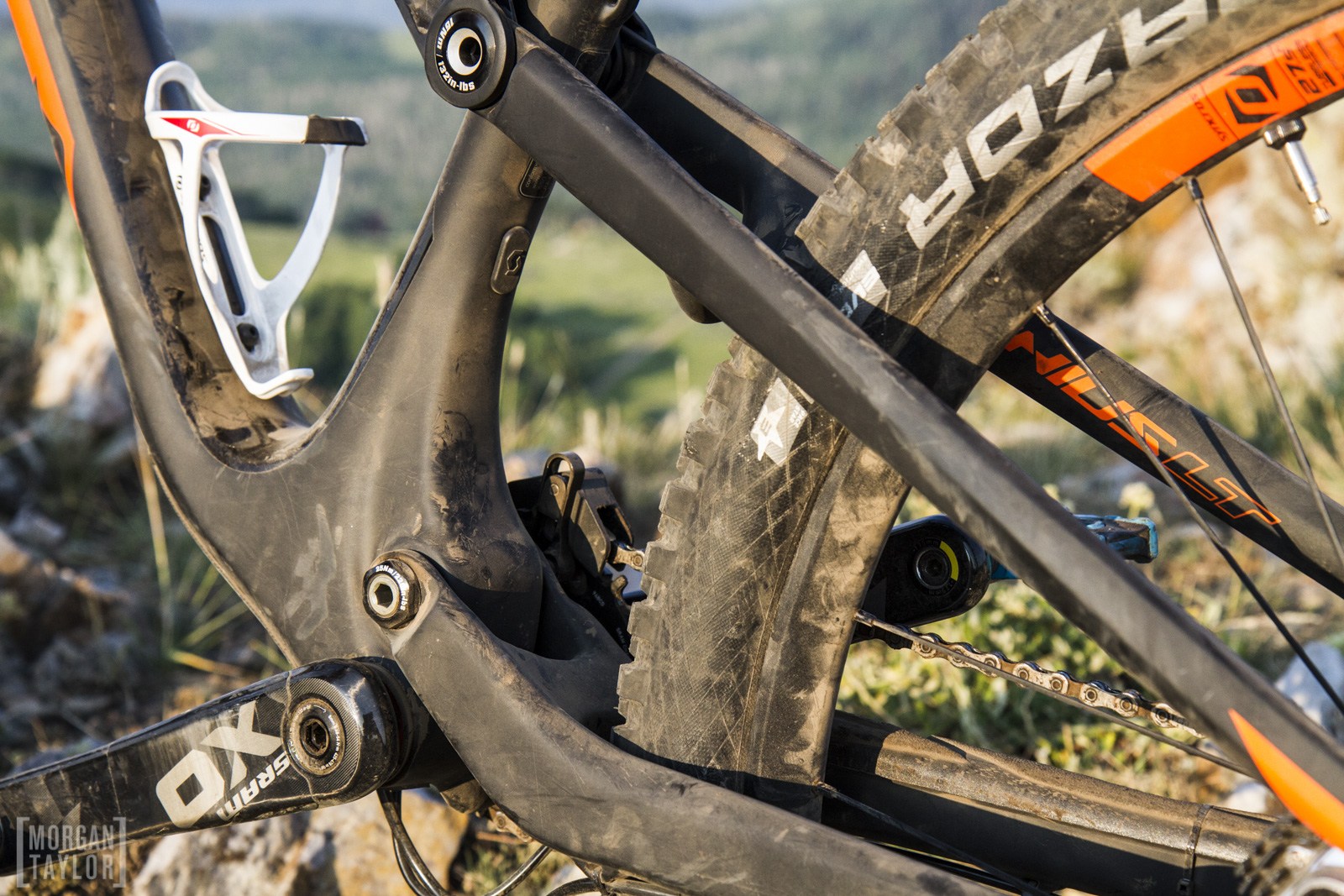 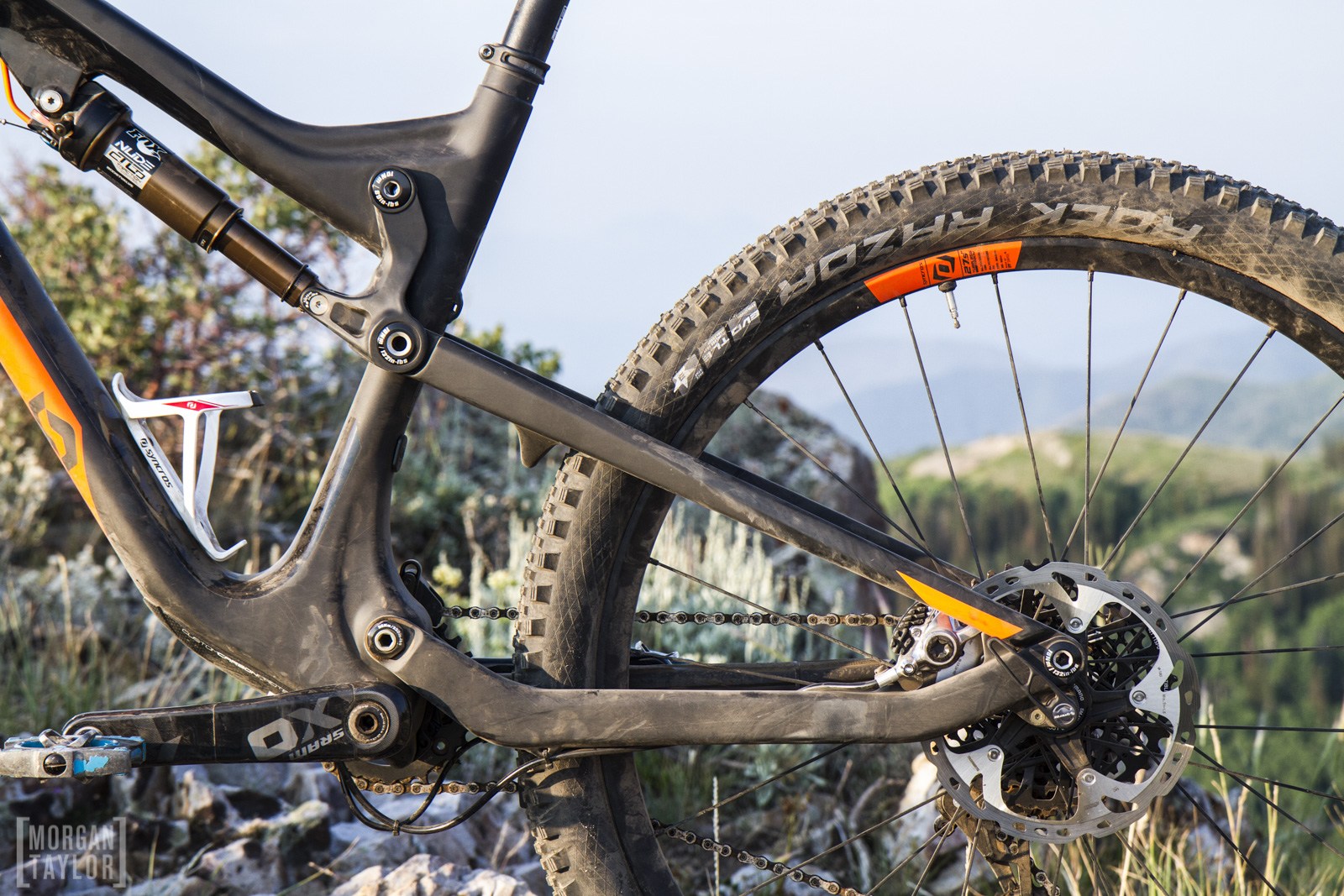 And that’s where all the pivots lie. 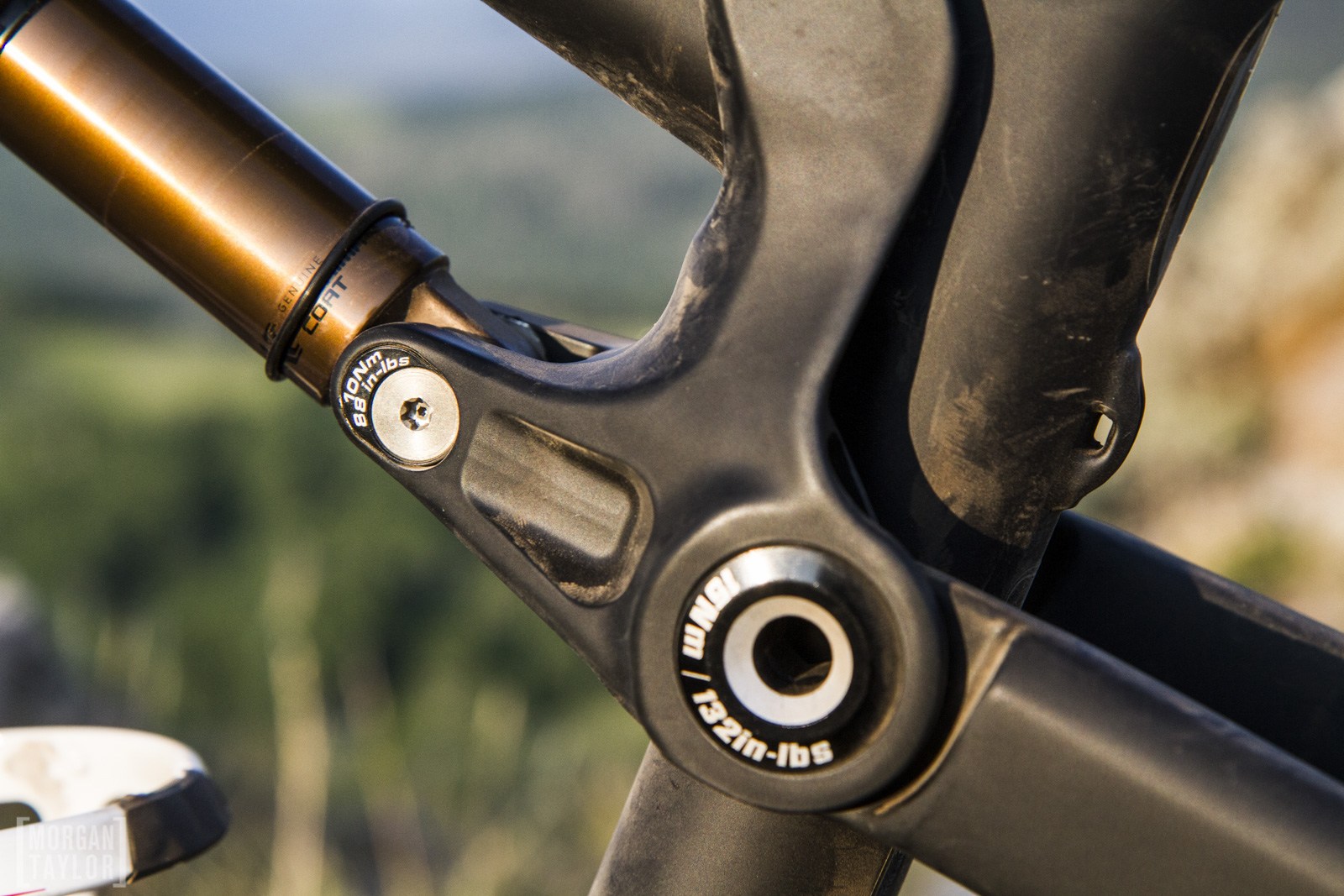 The shock’s flip chip adjusts the head angle from 66.3º in the low setting to 66.8º in the high setting, with 6mm difference in bb height. 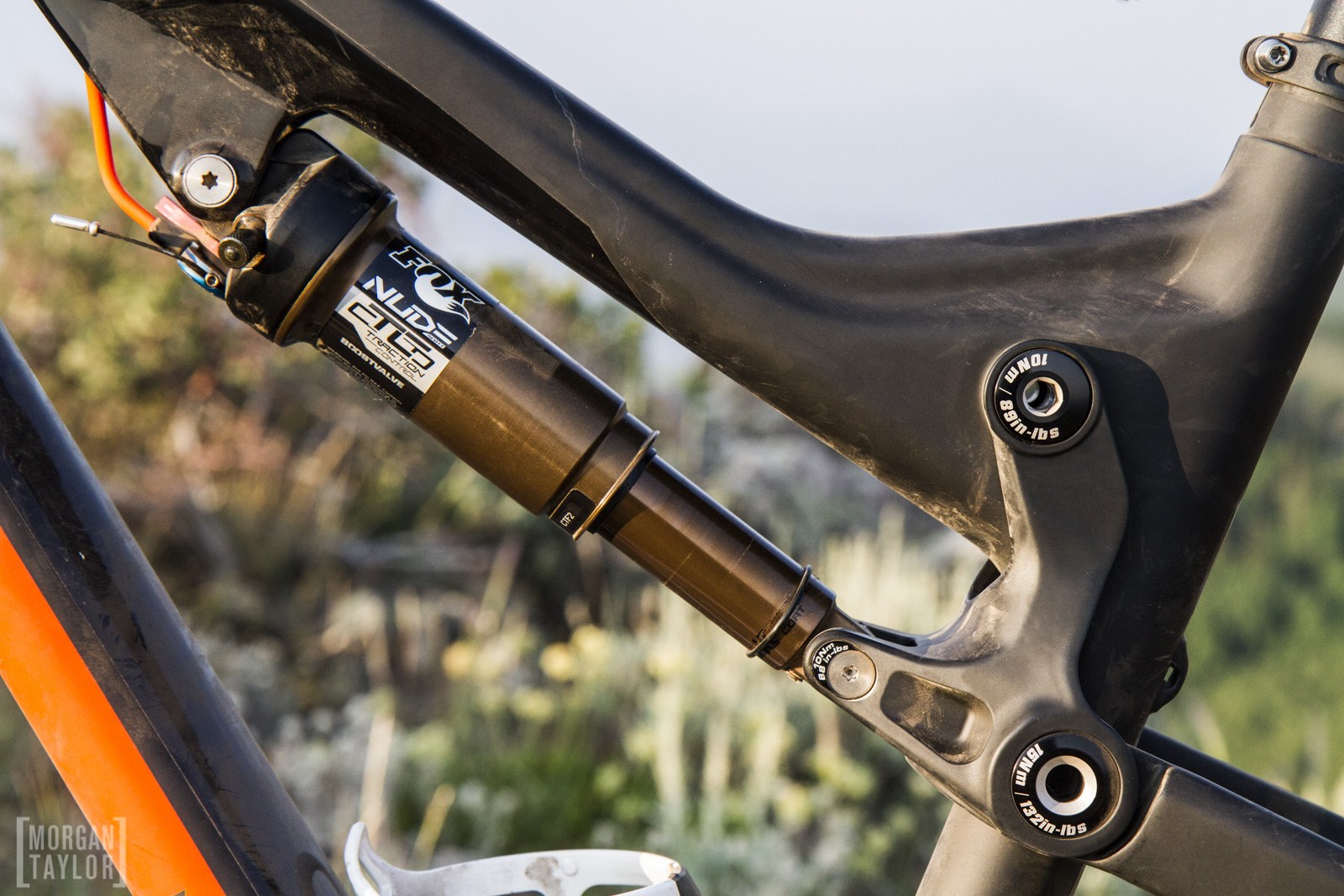 The Nude cTCd shock is controlled by Scott’s TwinLoc lever. While the shock may look like a standard inline shock from the outside, the system uses adjustable air volume rather than just a platform damper. Bottom line: the rear end is surprisingly XC-feeling when switched into the short travel modes.. 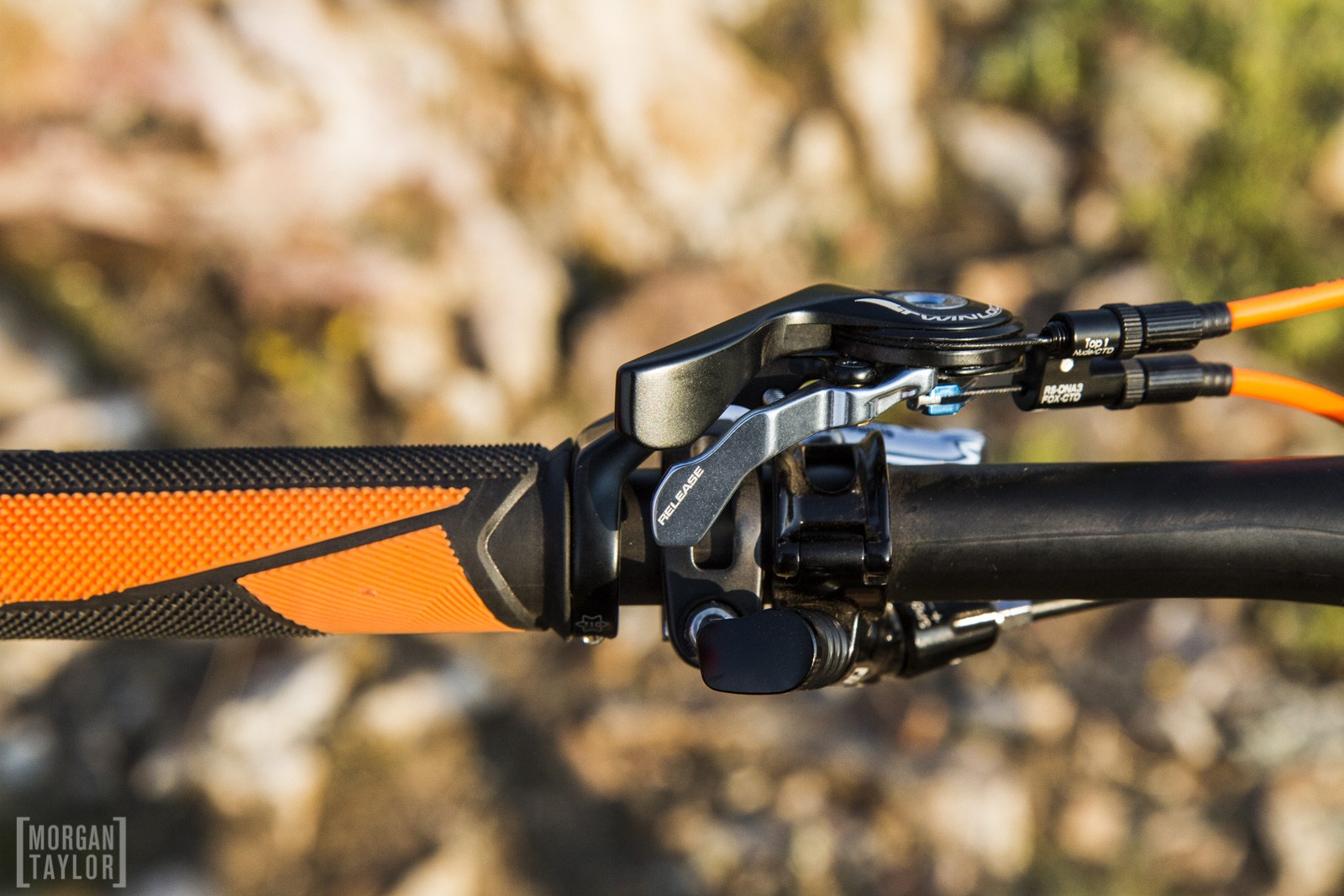 In yet another fine-tuning update the TwinLoc lever is now integrated with the grip for a slight uncluttering of an inevitably cluttered bar. 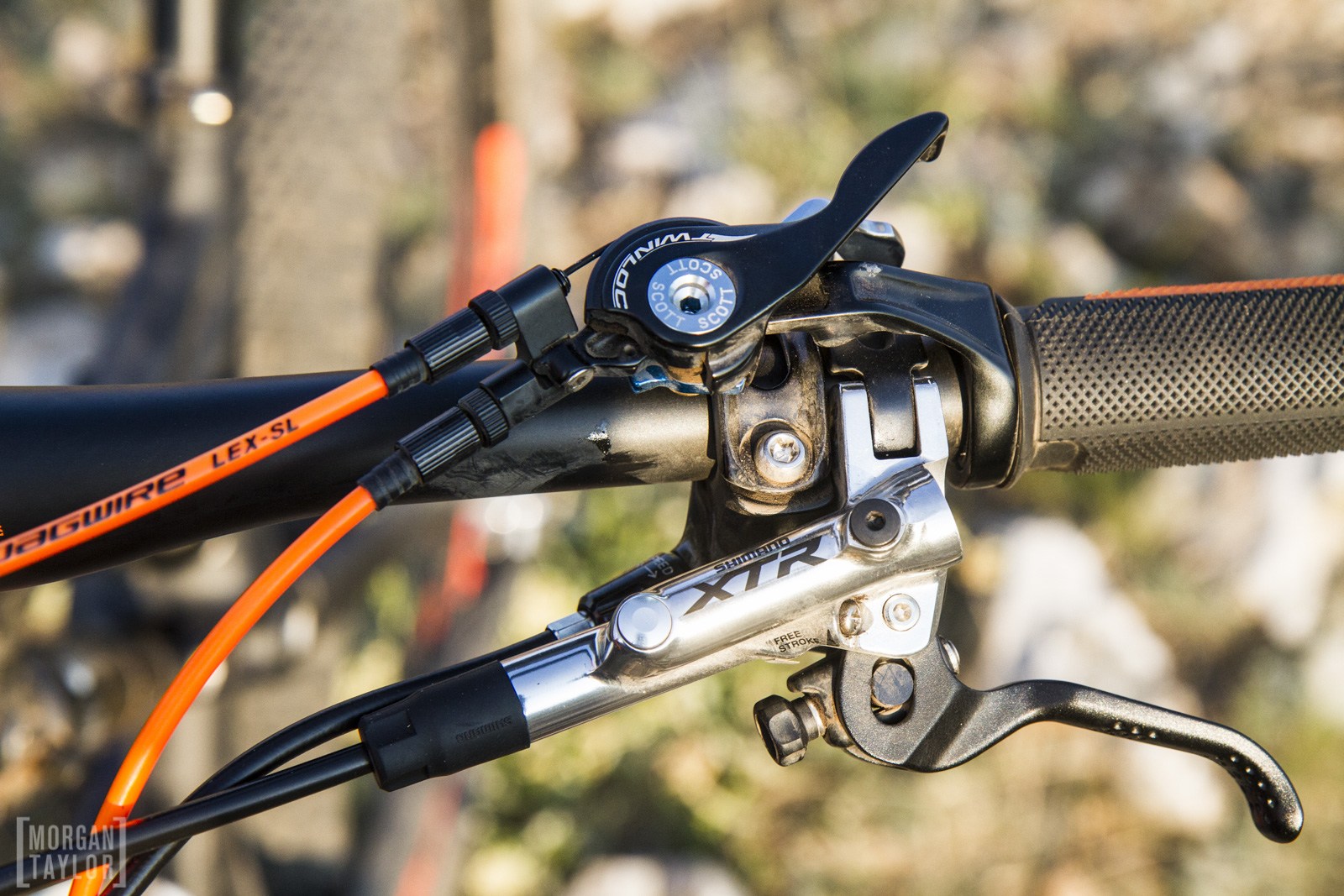 Both fork and shock cables have a barrel adjuster, but if I had my way this bike would have an RC2 damper up front and keep just the rear switch capability. 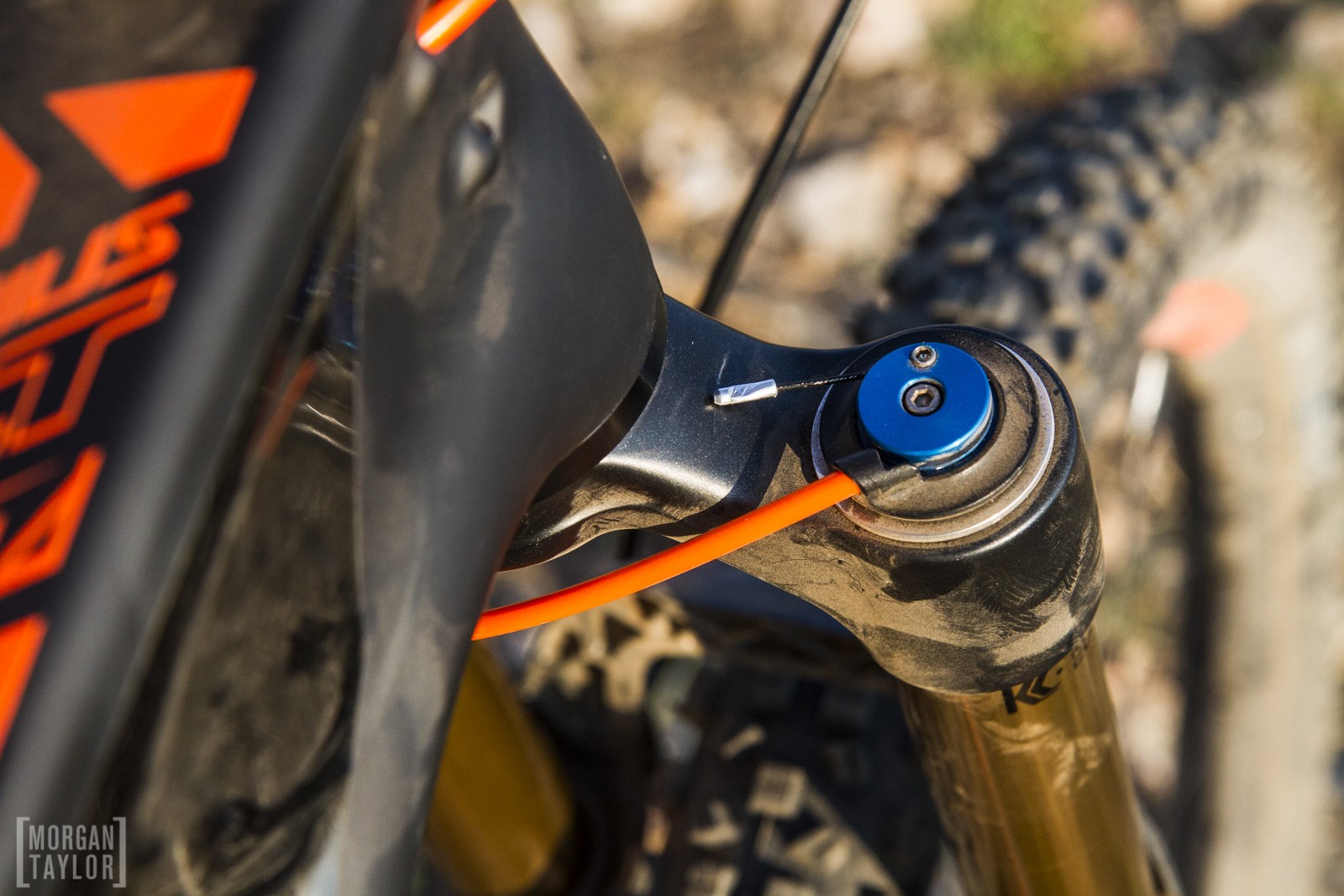 Routing behind the crown is tidy save for the orange housing… 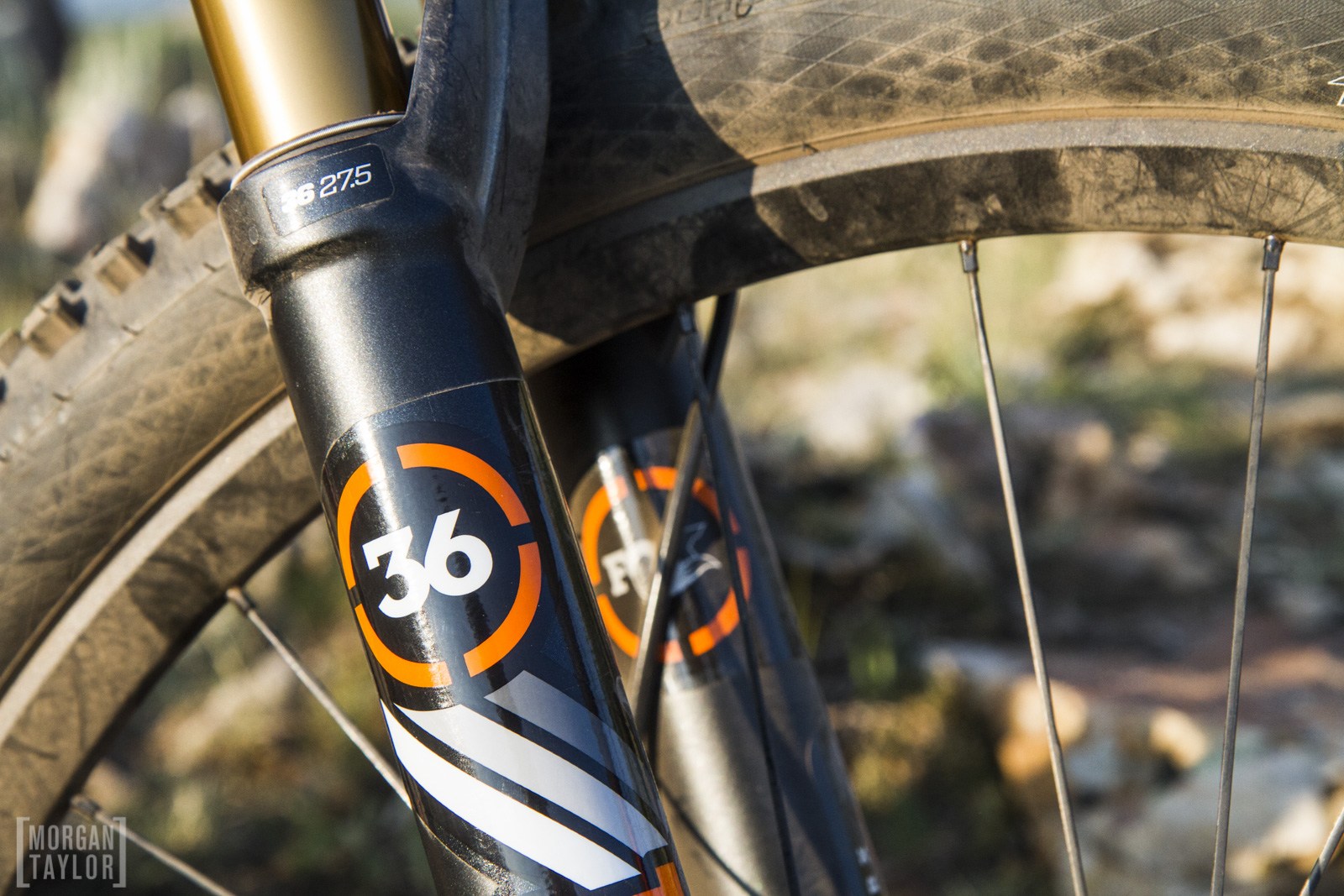 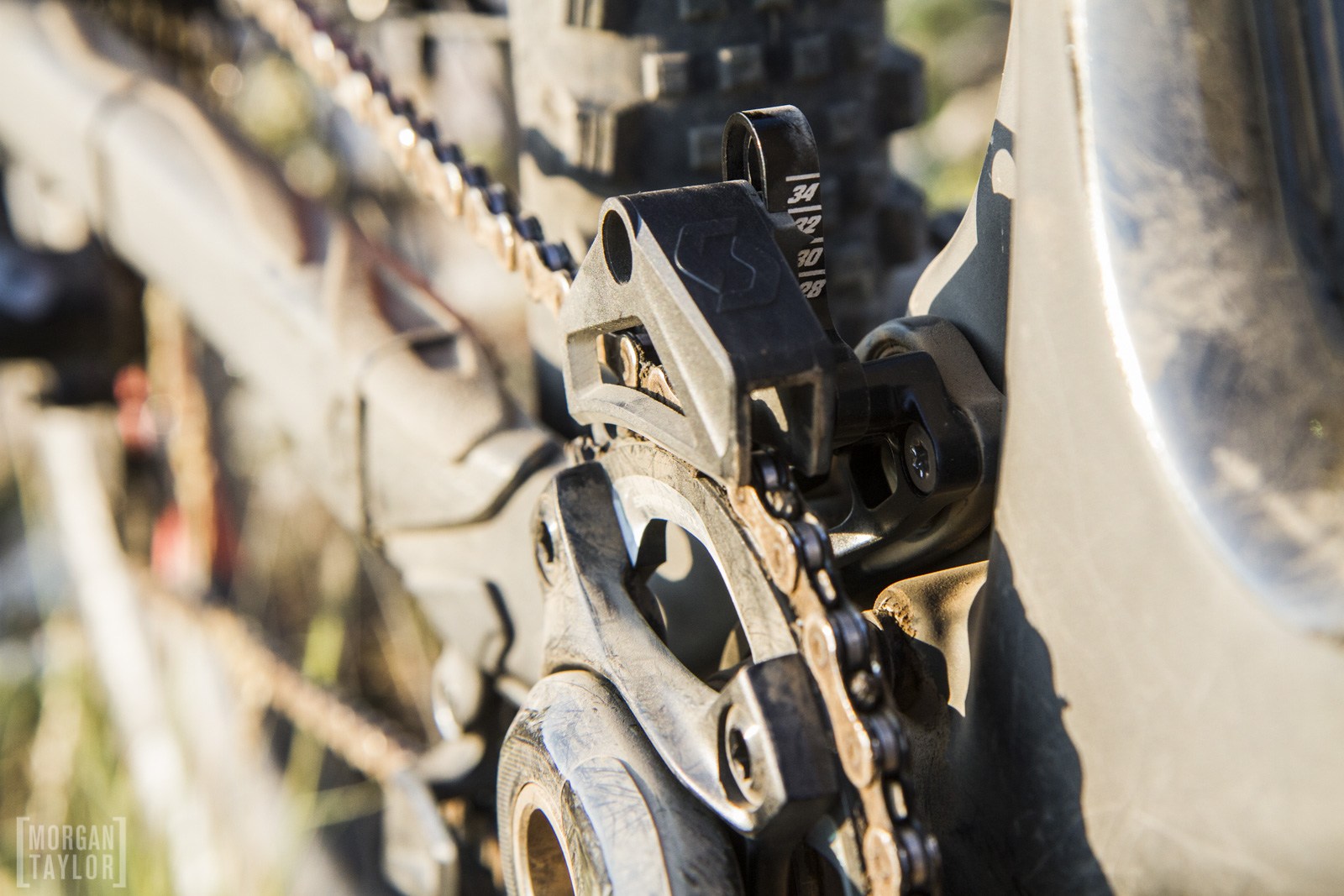 Scott is now making their own direct mount upper guide, adjustable for 28 to 34 tooth rings. 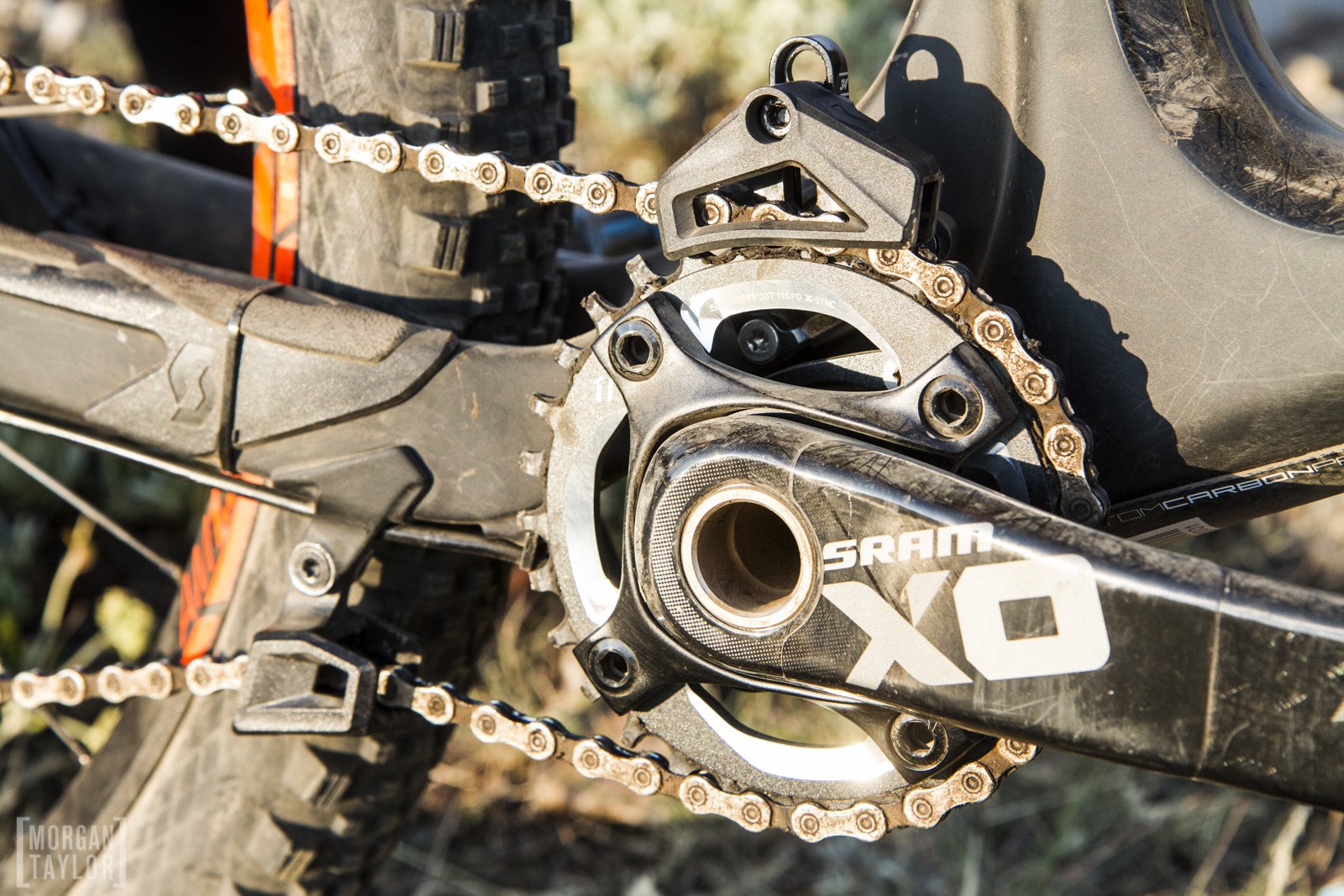 2015 seems to be the year companies get sensible with chainring choice. The Genius LT gets a 30T SRAM X-SYNC ring up front. 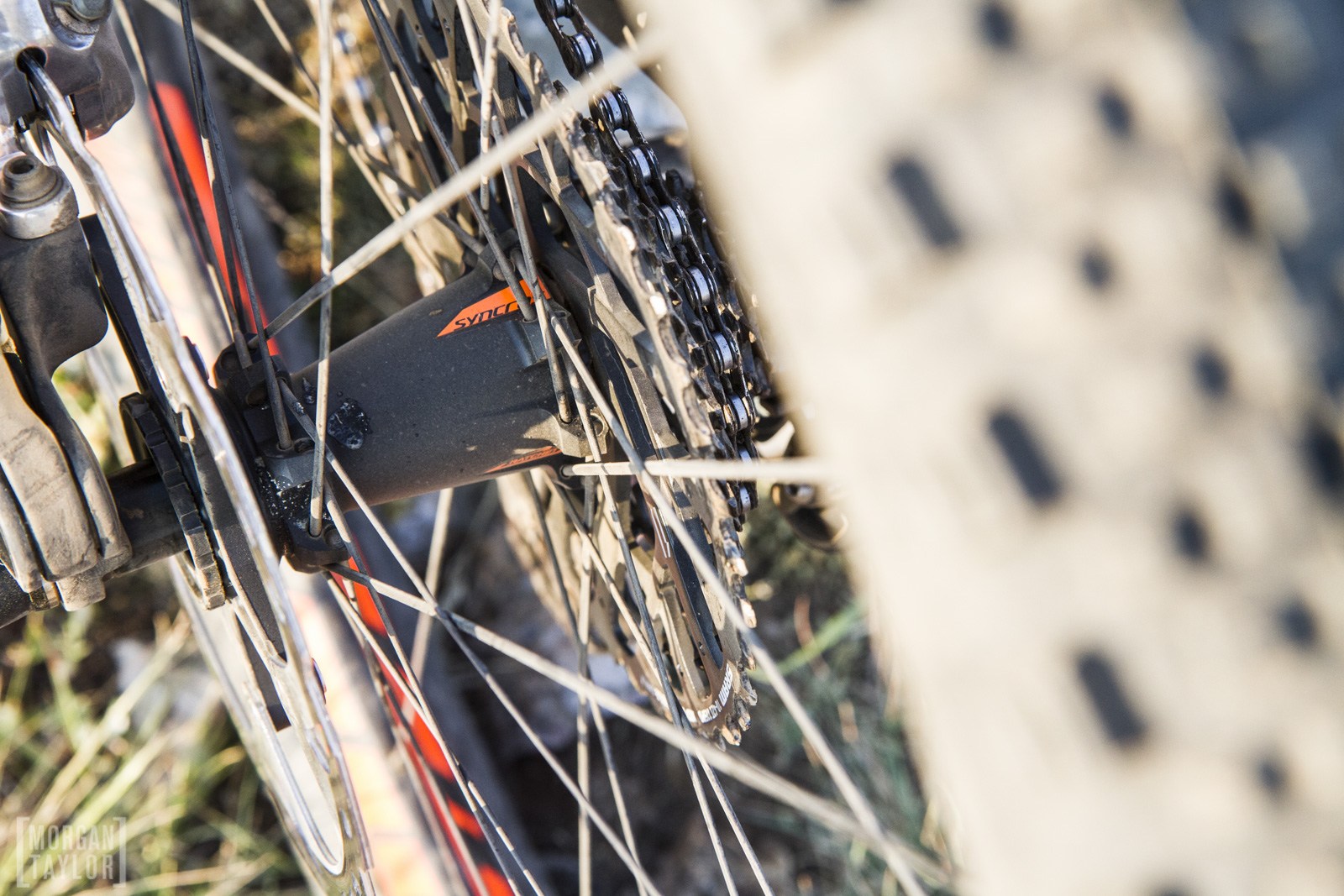 The Syncros AM 1.5 wheelset has DT internals, a common spoke length across the board, and an updated rim over last year’s bike. 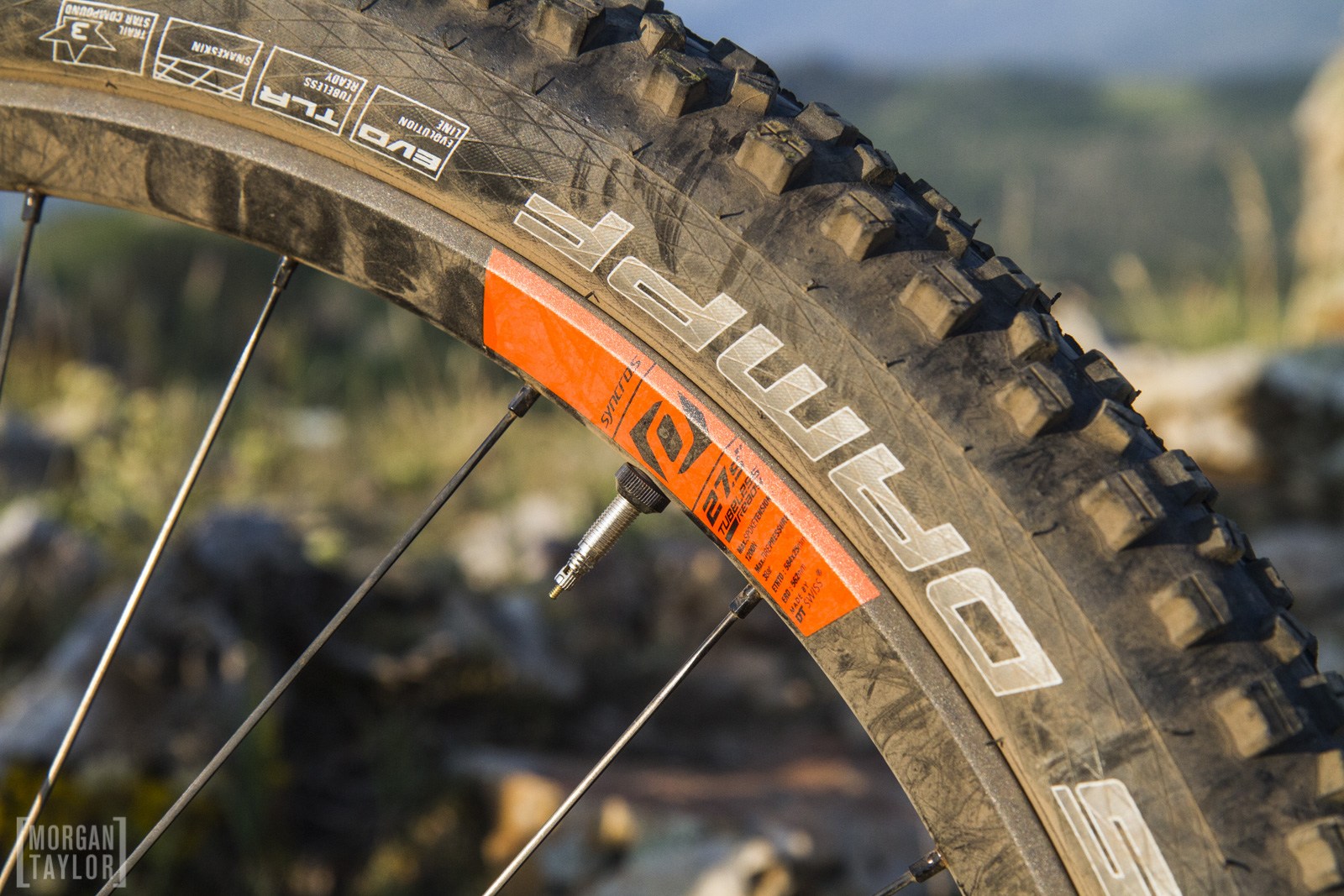 Putting the tubeless ready label to the test, Scott set up all of the Genius bikes as such and the DT-made rims were up to the challenge. 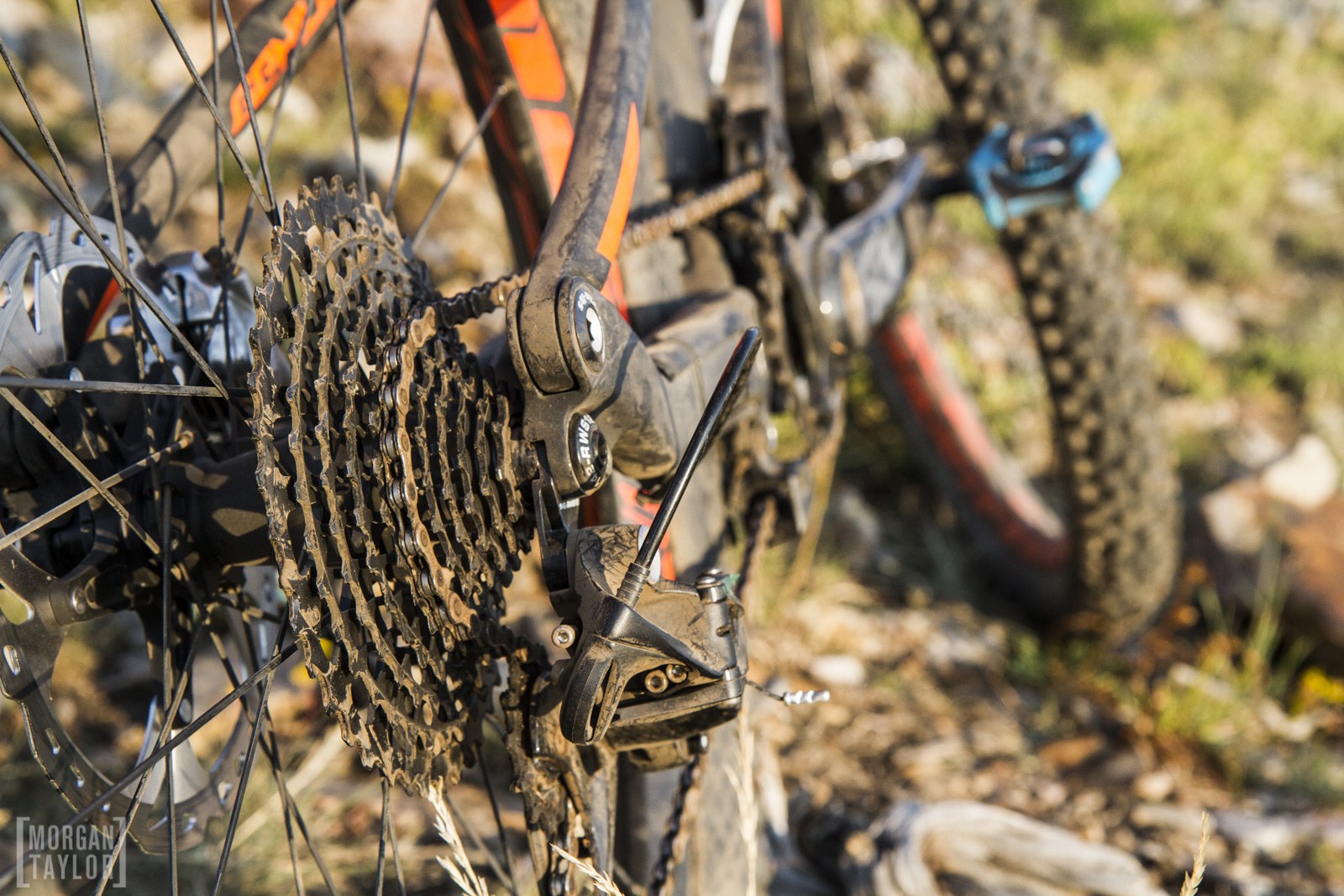 No complaints about X01 here. 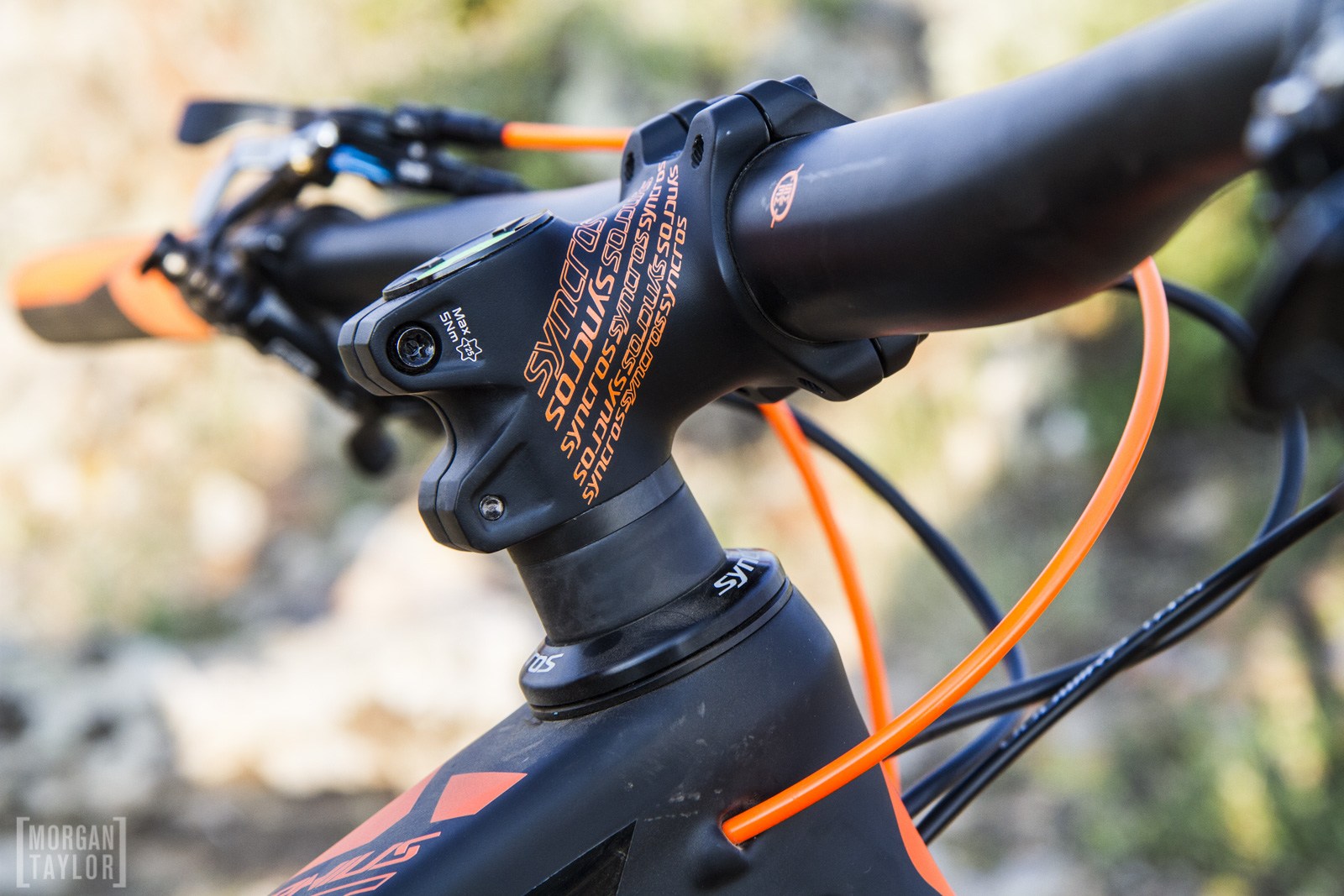 The Syncros finishing bits are a nice touch for effectively OEM spec pieces. 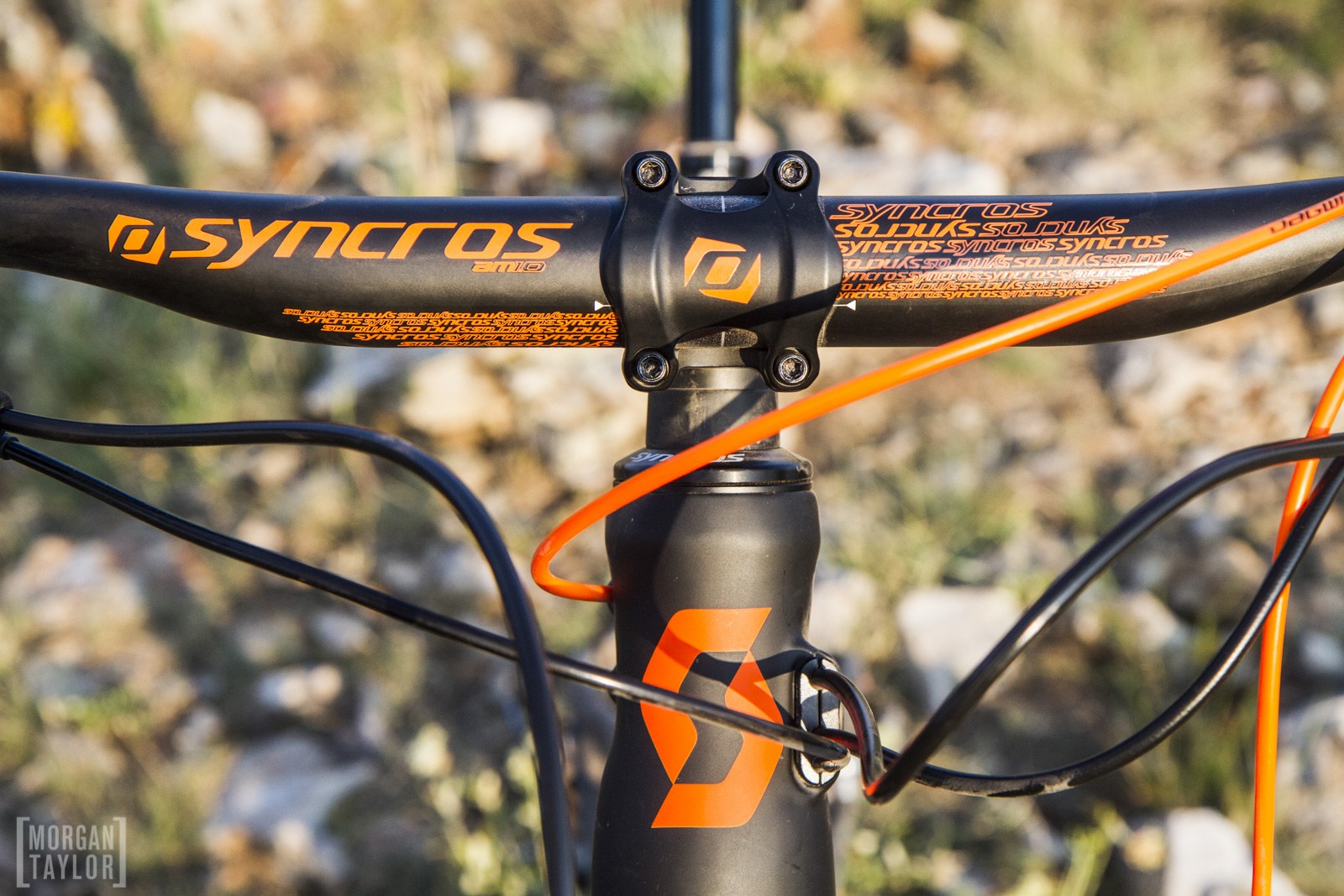 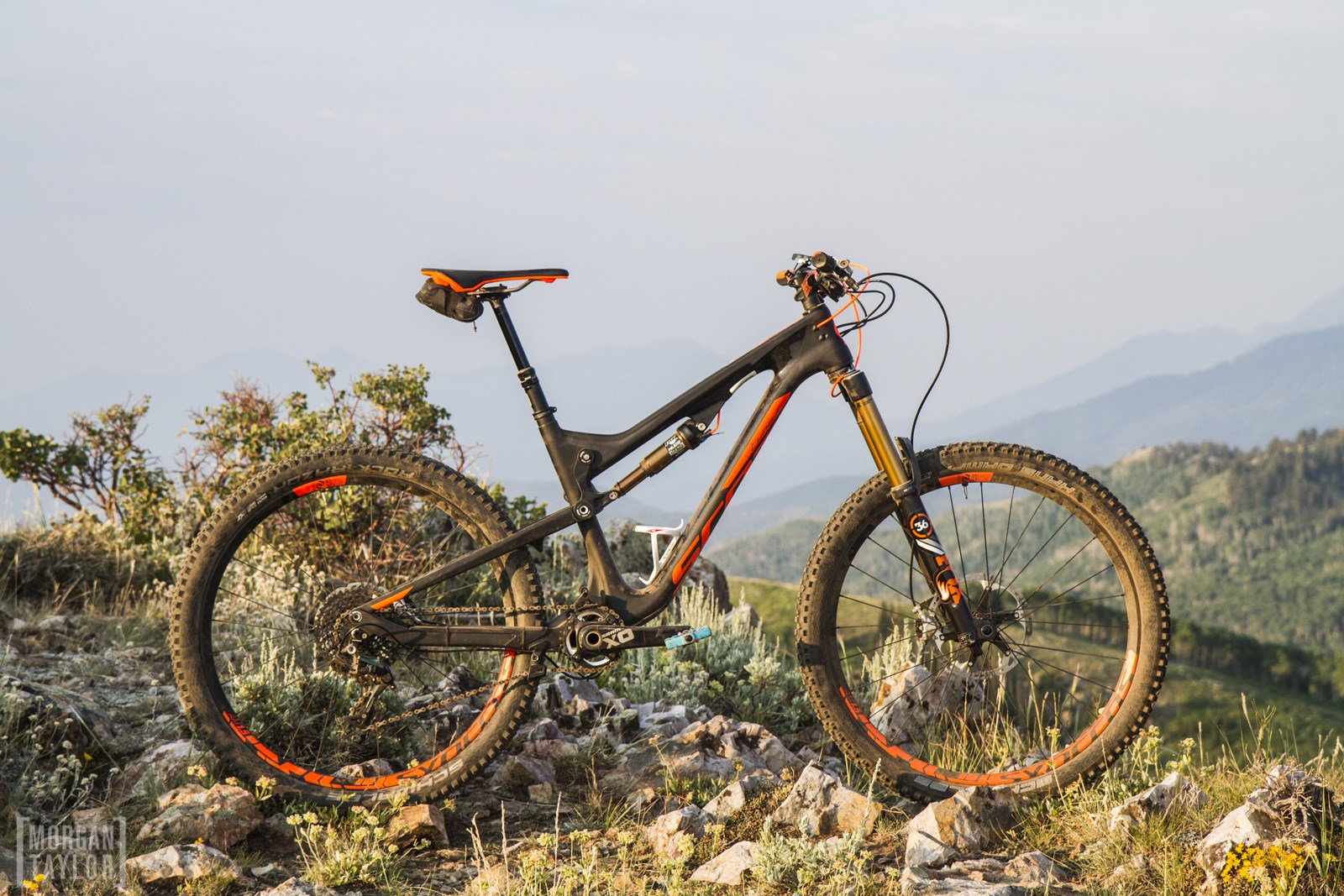 The 2015 Genius LT gets the burly fork its 170mm of rear travel deserves and as a result steps beyond the underforked Genius models of the past. At $7999 USD the Tuned model isn’t cheap, but with a number of refinements the 2015 bike presents a better value than last year’s model, and it’s definitely one of the lightest box-stock 170mm bikes you’ll find. Have a look at the range of Genius 700, 900, and LT models HERE.

How ’bout that black and orange?

Maybe if the bike had more switches and levers I would be interested. Personally I think a good suspension design doesn't need switches and lockouts and travel adjust.

Great photo's of the LT Tuned. I've read some tests and watched some video review's but this is the first time I could actually see the bike in all its glory.

Guys come on, you can do better. You mention that the new 36 is the crucial piece and then offer no ride impressions. How does it make the bike better?

The bike was previously spec'd with a 170mm Fox 34 – a fork 10mm taller than you can even buy in the aftermarket. I stated pretty bluntly that this was a fork I can't stand behind and that the Fox 36 is a great update.

Soooo cool, I could have read that on their website. Ride impressions?