For the company that produced the first carbon-framed World Cup DH-winning race bike, Santa Cruz’s lack of a 650b wheeled descender was starting to get conspicuous. It wasn’t until Fort William, apparently, that the Syndicate decided (more or less as a group, it sounds like) that the larger-wheeled bike was the way to go. But it wasn’t based on timed testing that they came to that conclusion – apparently it was based on a feeling that they were faster. 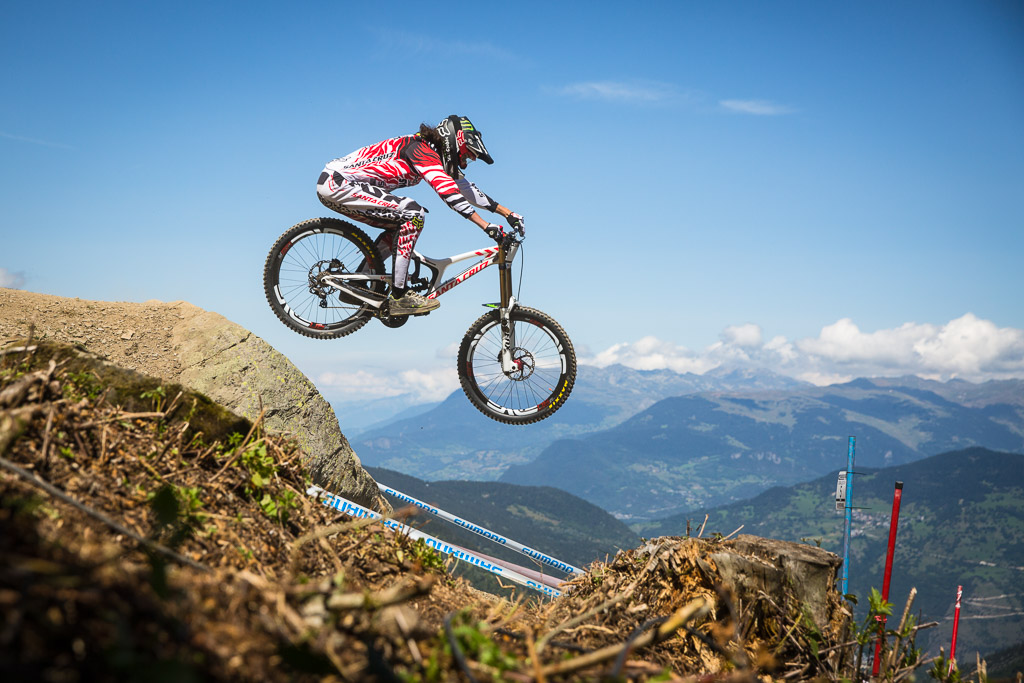 Josh Bryceland decided during post Fort William testing that the larger wheels felt faster – which the Santa Cruz crew thinks is can be as important as the clock.

The shock rate has been tuned to be less progressive than the previous model, delivering more consistent damping throughout the travel.

Santa Cruz had been working on a 650b V10 more or less since they released the V10 Carbon in late 2012. It was also around that time that they were making a last minute decision to release the Bronson with larger wheels, rather than the 26″ size that had been planned for. Almost two years later down the line, there are now Carbon V10s in 650b wheels on shop floors. 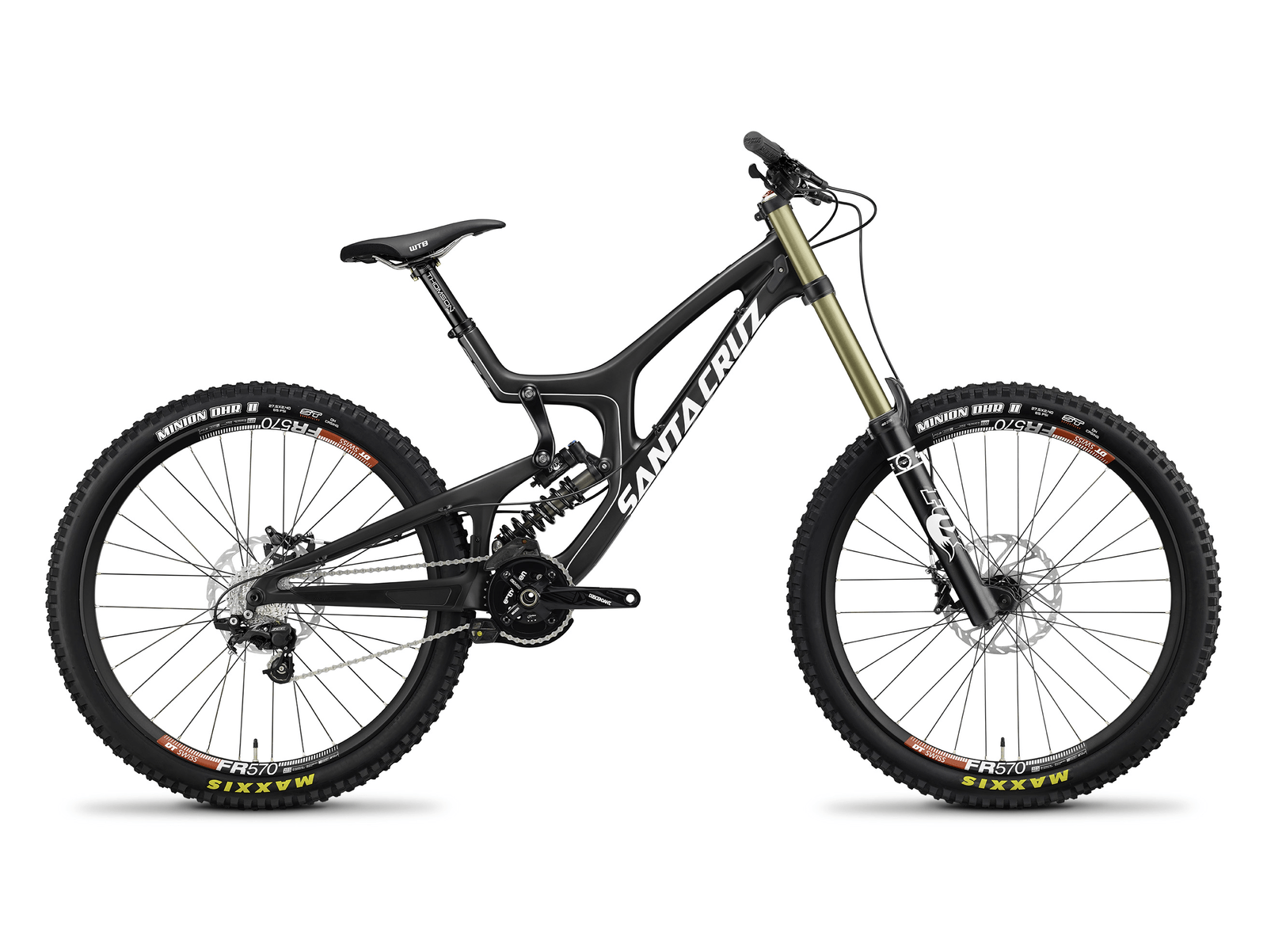 For the moment it seems that Santa Cruz has stepped back from bubblegum and cotton candy.

The new frame benefits from a slightly longer reach to suit evolving rider preferences.  However, our athletes felt we always struck a good balance with our chainstay length, so we focused on maintaining this dimension when accommodating larger wheels.

Bryceland first raced and won on the 27.5″ V10 at British Nationals at Innerleithen in July. After that, he was never far from the top step at any race.  In Méribel he held back, choosing to race to protect his series lead, which he easily locked up with a restrained-looking 3rd place run. A streaking Sam Hill barely bettered the Rat at Mt. Ste. Anne and he’d be wearing the rainbow stripes in 2015 if not for an over-zested final sender to flat in the last 10 seconds of the Hafjell course.

It’s a very impressive next chapter in a V10 history book that is full of gold-lined pages. Below the line, the words are from Santa Cruz.

Drawing on feedback from Peat, Minnaar and Bryceland on their personal settings, the 6th generation of our flagship model now offers 216mm / 8.5” of travel in two adjustable geometry positions: 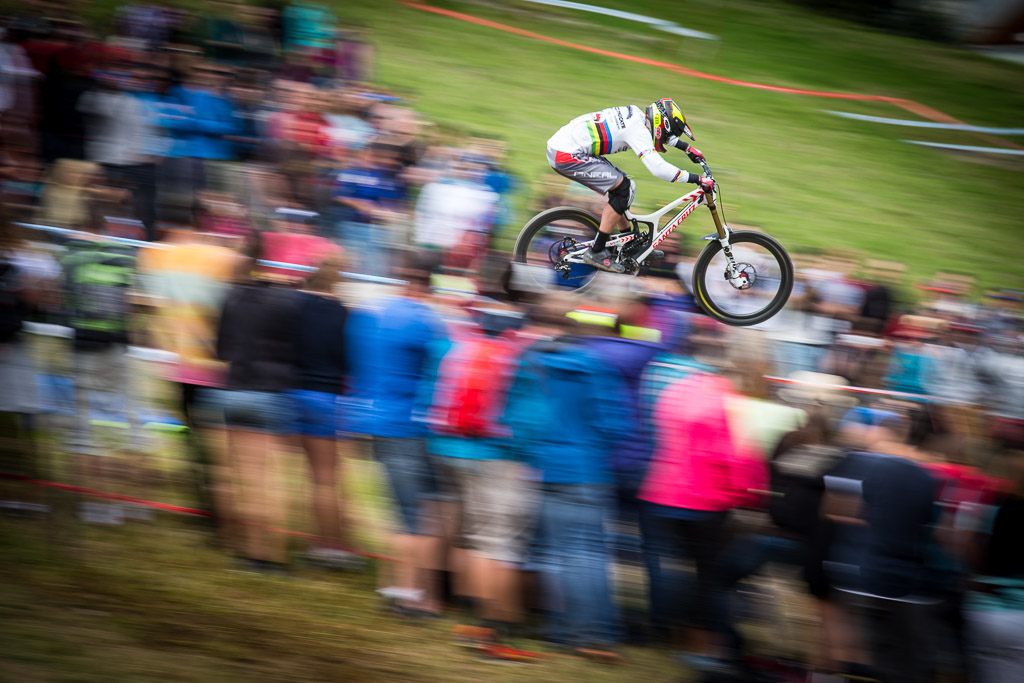 Carbon lay-up analysis and frame shape optimization allowed for more efficient use of material, and the savings were then reinvested into other areas to ensure the bike withstands Ratboy’s huge flat landings.  The front triangle and swingarm sport larger-diameter sections, but we’ll refrain from the usual drone about the positive effect that has on strength and stiffness. 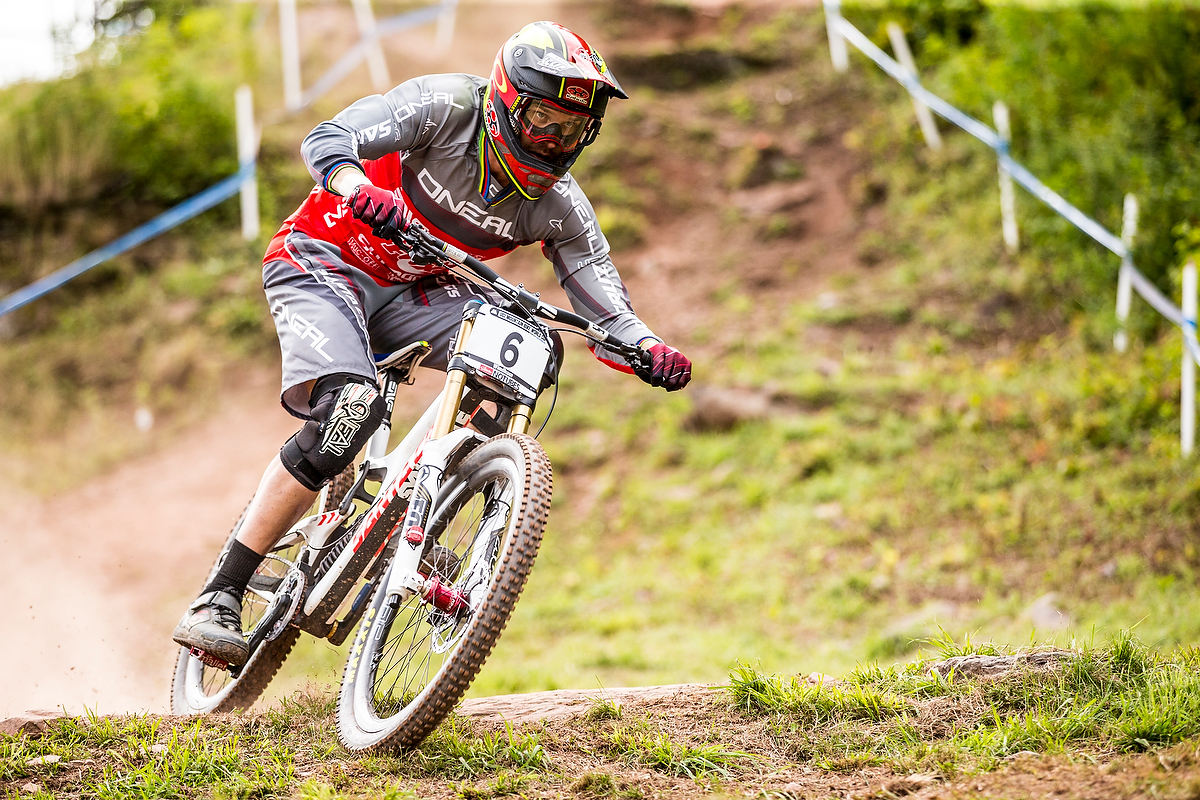 Greg Minnaar aboard the 650b V10. After Fort William the riders all opted for tweener wheels.

As if a complete redesign weren’t enough, we’ve also introduced the new Carbon C frame with a Zee build kit. This build puts V10 performance within reach of more riders than ever before, lifting the race pace of World Cup athletes and privateers alike. 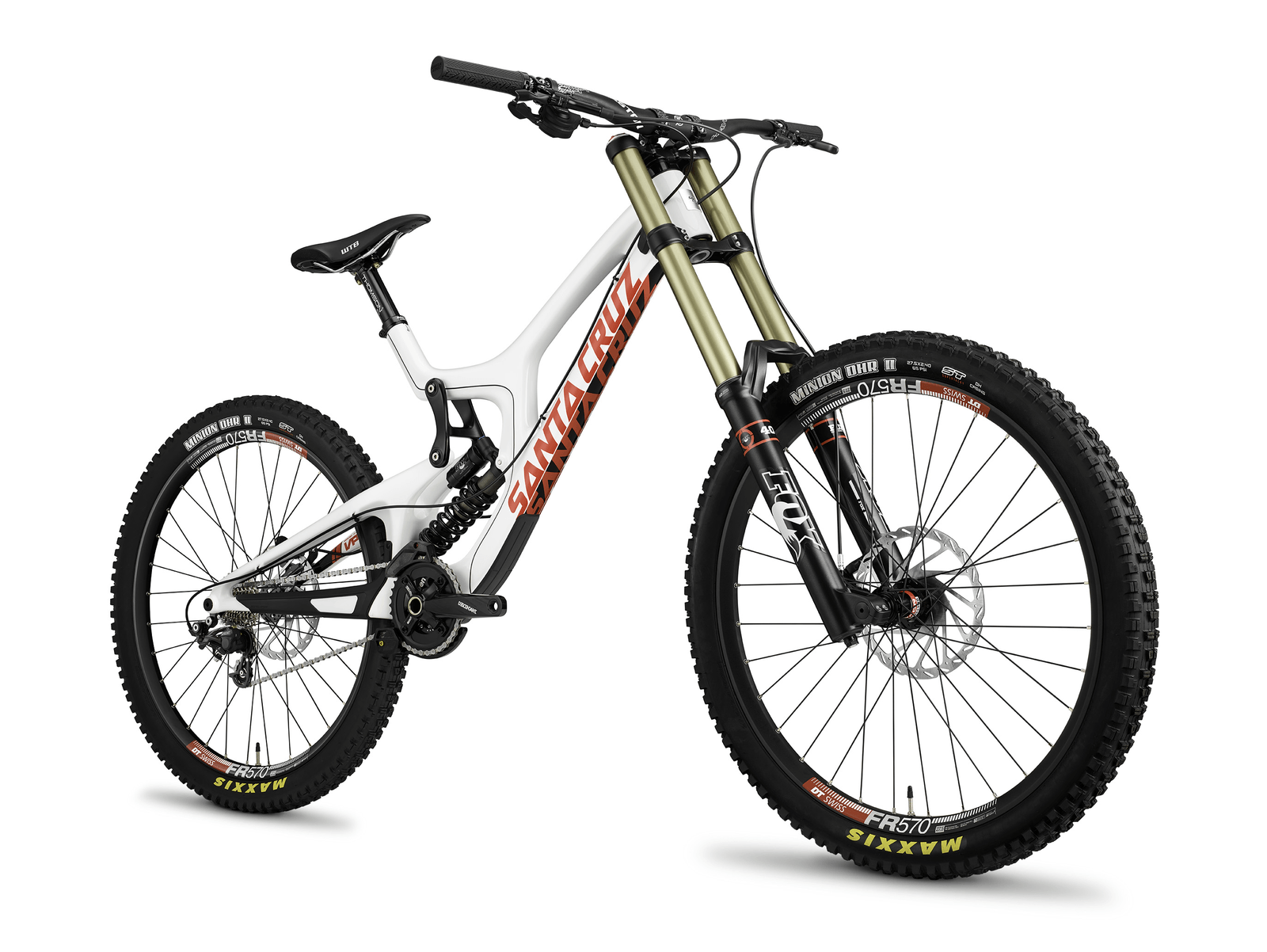 One of your monochromatic choices; white. This is the entry level spec. 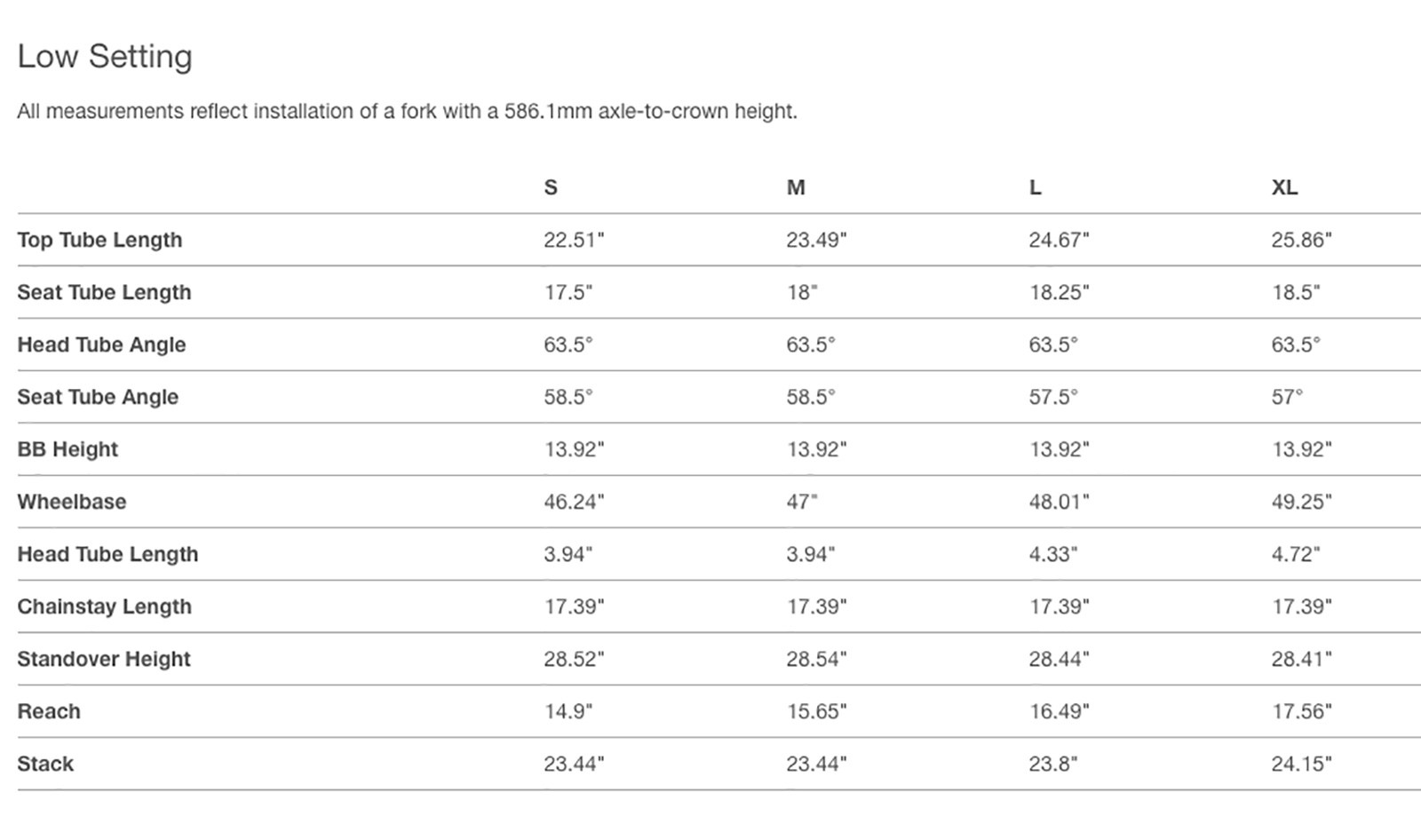 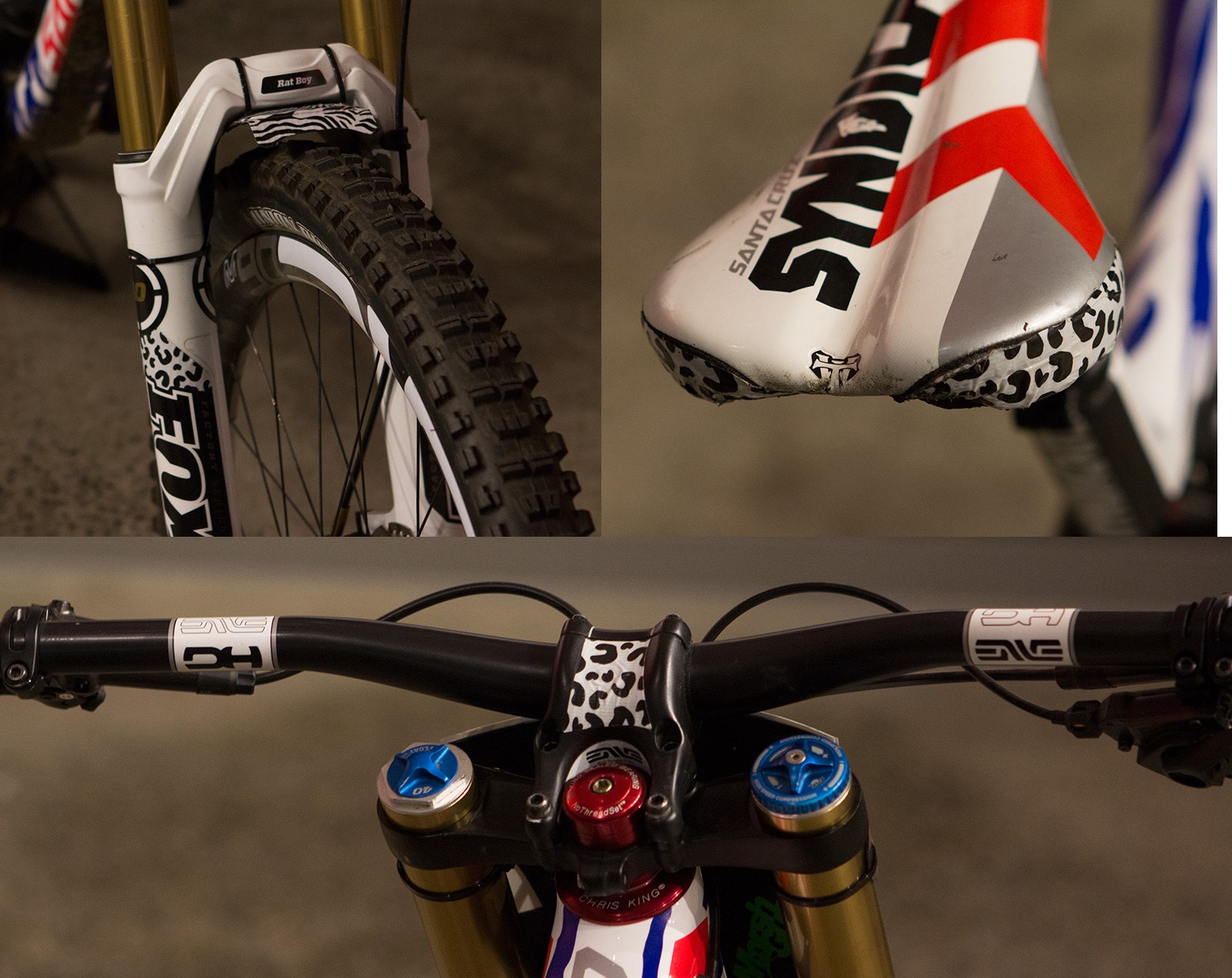 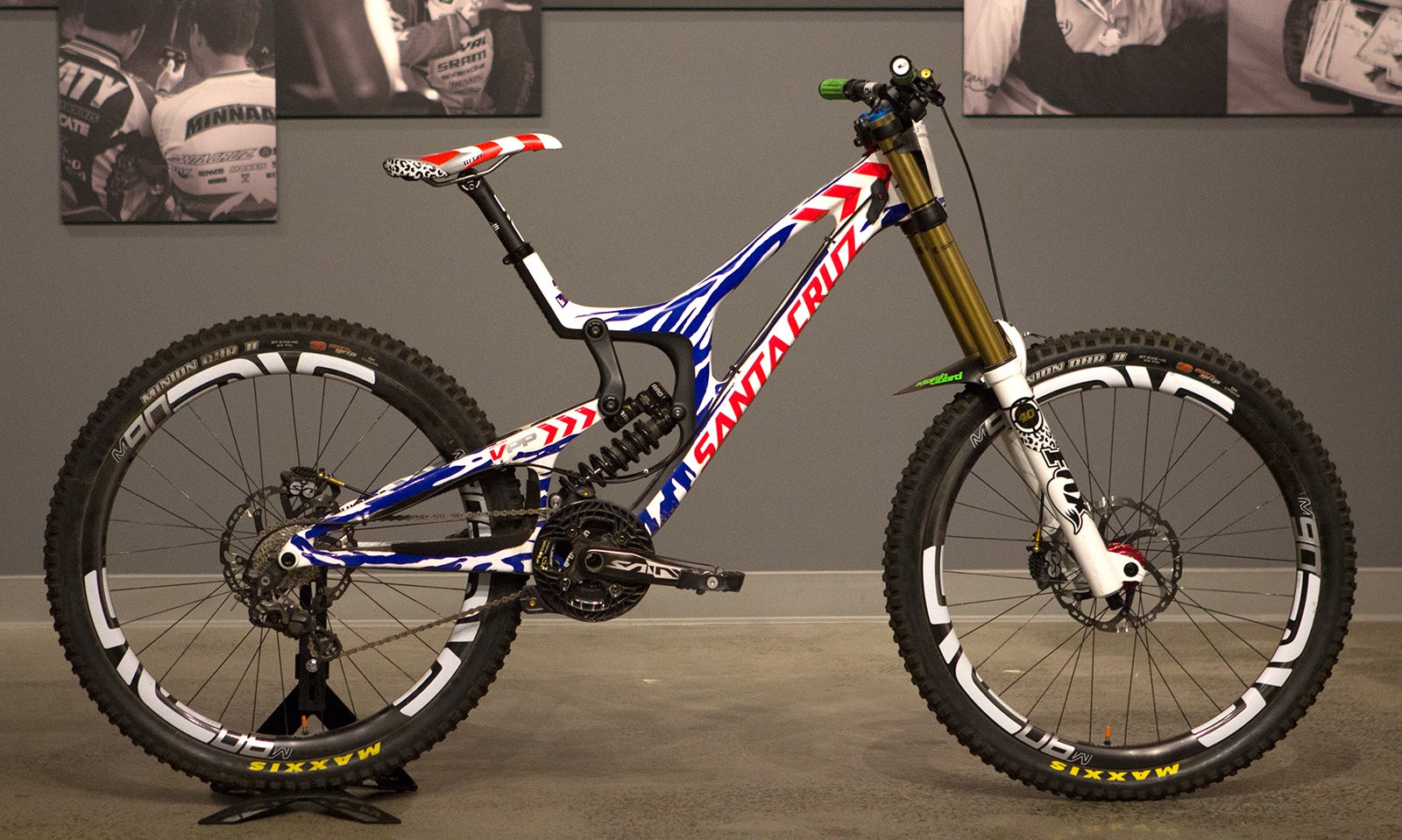 This is the bike that Ratboy used to almost win World Championships. Josh told us he hopes to be ready for the second round in 2015 and that he feels that he can still win the overall despite missing the first round.

Keen to see what we mean? A select number of dealers already have the new V10 on order/in stock; Click Here to find out where.

why not 29 up front with a dorado or emerald? moto style

Lies. The riders didn't opt for tweener wheels until after Leogang.

So the xxl exists on the SC site for the high setting but not for the low. And not in the sizing diagram.