It’s that magical time of the year when 2015 bikes start to trickle out from out behind the curtain. Rocky Mountain Bikes has just passed along the details of their 2015 Thunderbolt. Following up on the success of their 2014 model Rocky has included a few key changes, the most notable of which are carbon frame construction, and the integration of their RIDE-9 geometry adjustment system. 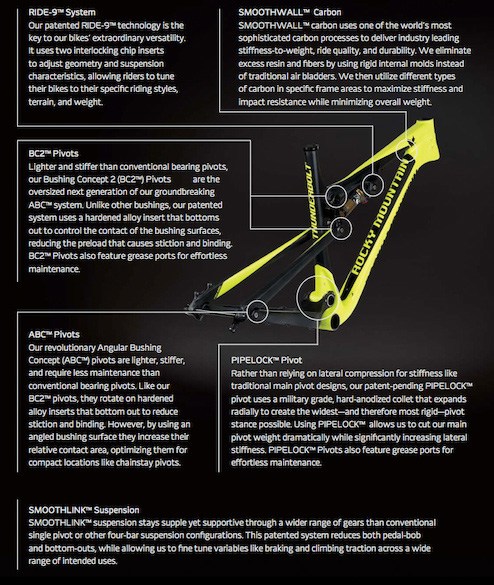 The lowdown on all the tech that’s made it into this year’s Thunderbolt frame. 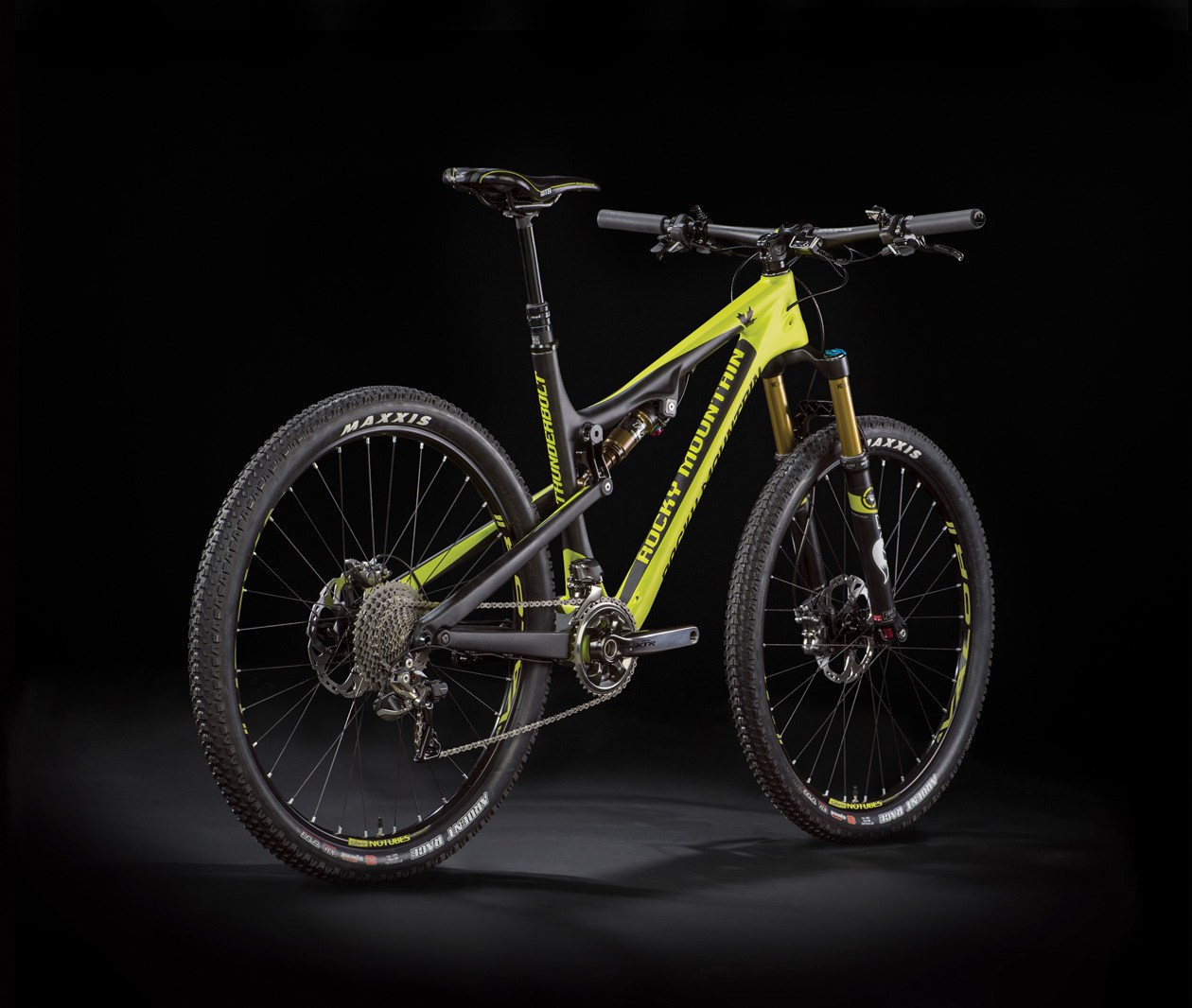 The Mack Daddy of the Thunderbolt Line.

Here’s what Rocky has to say about the Thunderbolt 799 MSL:

“We designed the Thunderbolt MSL for our own special blend of XC and trail riders—people who hammer at the pointy end of the pack, but stay aggressive and stylish when terrain gets rougher. Marathon racing? Sure. Triple up those whoops? Why not! BC Bike Race? Of course! Smash every corner? Be rude not to.”

The 799 MSL is draped with Shimano’s new XTR Di2 11-speed drivetrain, carbon Stan’s wheels, and premium Fox suspension front and rear. It sports a stealth spot to store that Di2 battery, internal cable routing, and grease ports on the pivots for dead-simple maintenance. Start saving those shekels, as the Canadian MSRP for this beauty is $11,499. 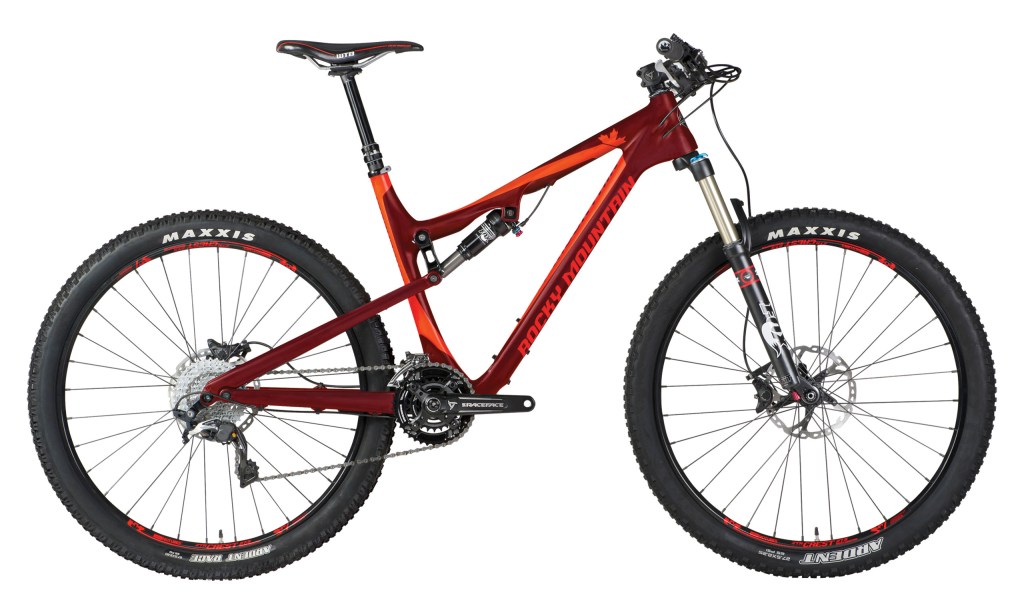 Next in the lineup is the 770 MSL. It sports all the same features as the 799, but with a blend of XT and Race Face components to help bring the cost out of the stratosphere. The frame is still Di2 compatible, should you fancy splurging in the future. Fox Racing Shox handle suspension duties, and it rolls on Stan’s ZTR Crest wheels. 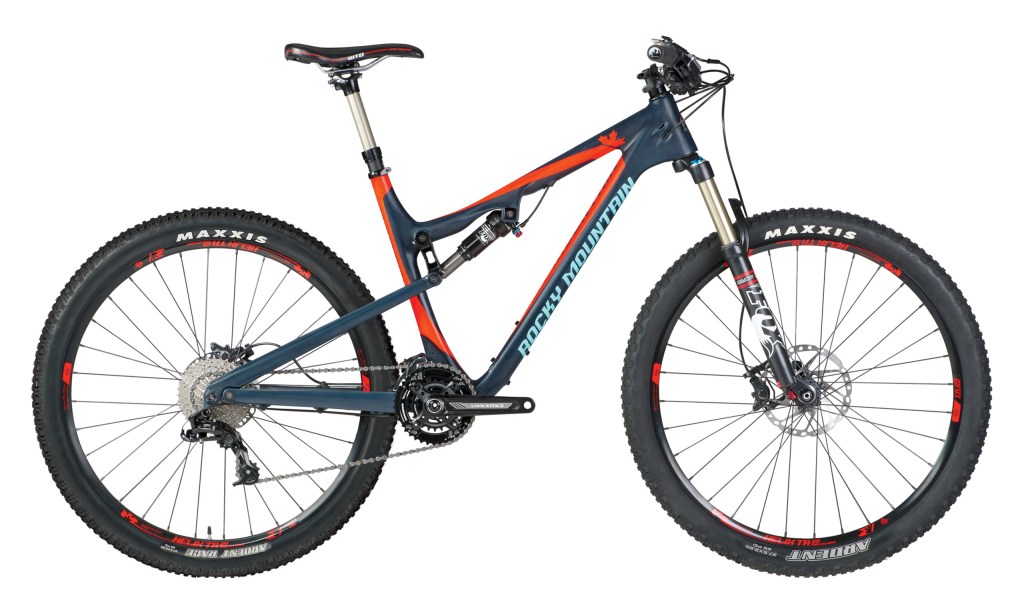 If it sports a version of the Gulf Racing colours, you know it’s gotta be fast…

Rounding out the pack is the 750 MSL. While it may be the most wallet-friendly of the bunch, Rocky hasn’t skimped on the parts, or the details. A mix of SRAM drivetrain with Shimano SLX stoppers make both the up and the down equally enjoyable, while Sun Ringle tubeless wheels mean you can leave the extra rubber at home. Fox is once again called upon to take care of the front and rear squishy bits. 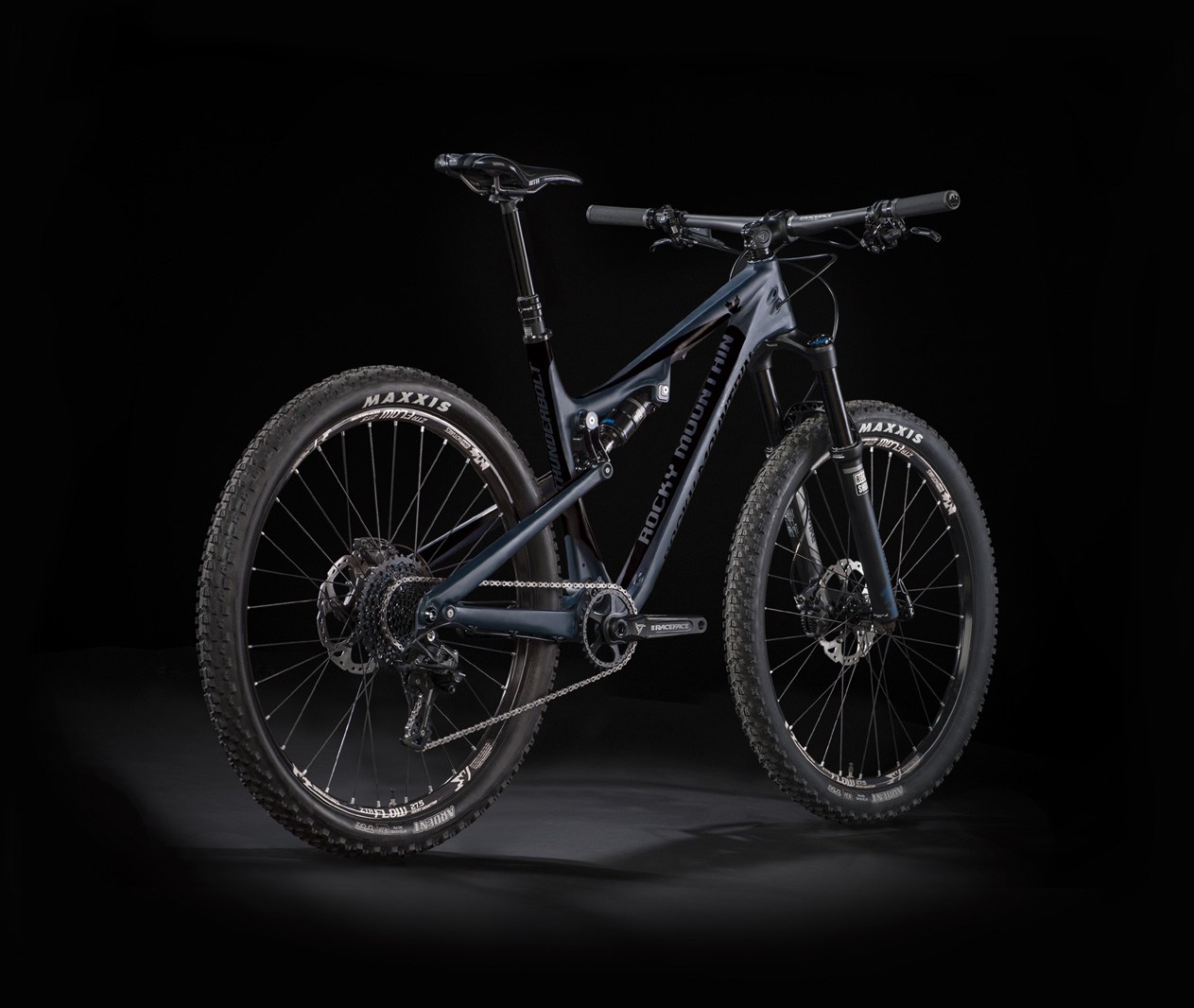 Oh yeah. We could have all kinds of fun on that…

Rocky hasn’t forgotten about those of us that like a little extra burl in our bikes. Here’s the word straight from the horse’s mouth:

“We’re a selfish bunch, so we couldn’t resist producing a Thunderbolt MSL BC Edition. With its lively, bottomless-feeling SMOOTHLINK™ suspension curve, adjustable RIDE-9™ system, and class-leading stiffness it was the perfect candidate for some additional brawn. Set up the way we set our own bikes up—wide bars, short stem, big tires, stiff wheels, and premium suspension—, the BC Edition translates the Thunderbolt’s agility into true trail bike playfulness and aggression. 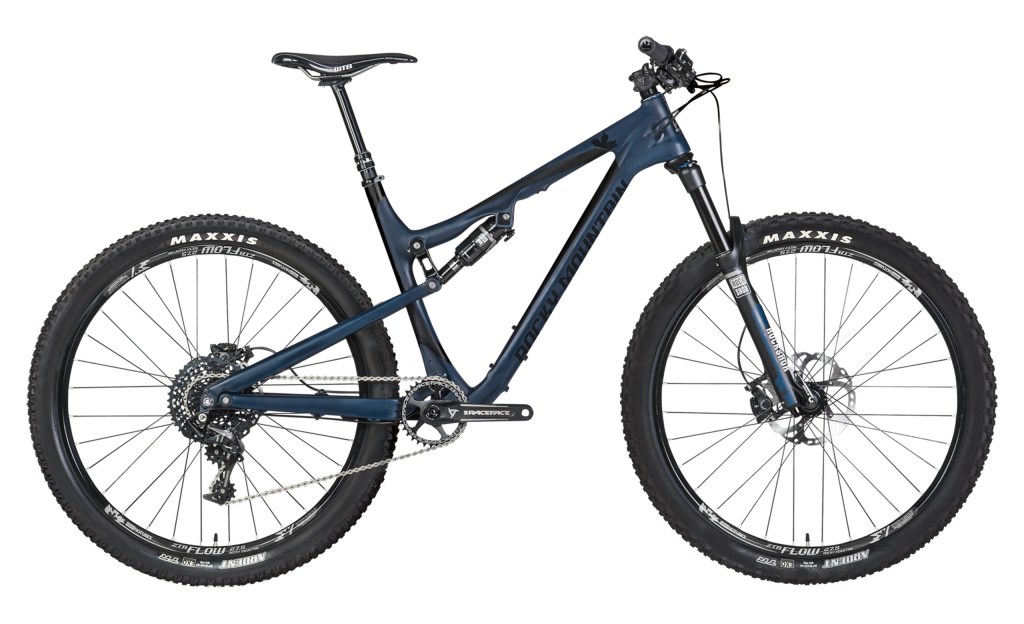 Just enough stealth to keep you flying under the radar. Literally.

With a Pike up front and a Monarch RCT 3 handling the rear bumps, the BC edition also sees unique touches like the SRAM X01 drivetrain, Stan’s ZTR Flow rims, and a slightly wider Race Face Next SL carbon bar. The geometry gets a bit slacker for the BC edition as well. Check out the chart for all the details. 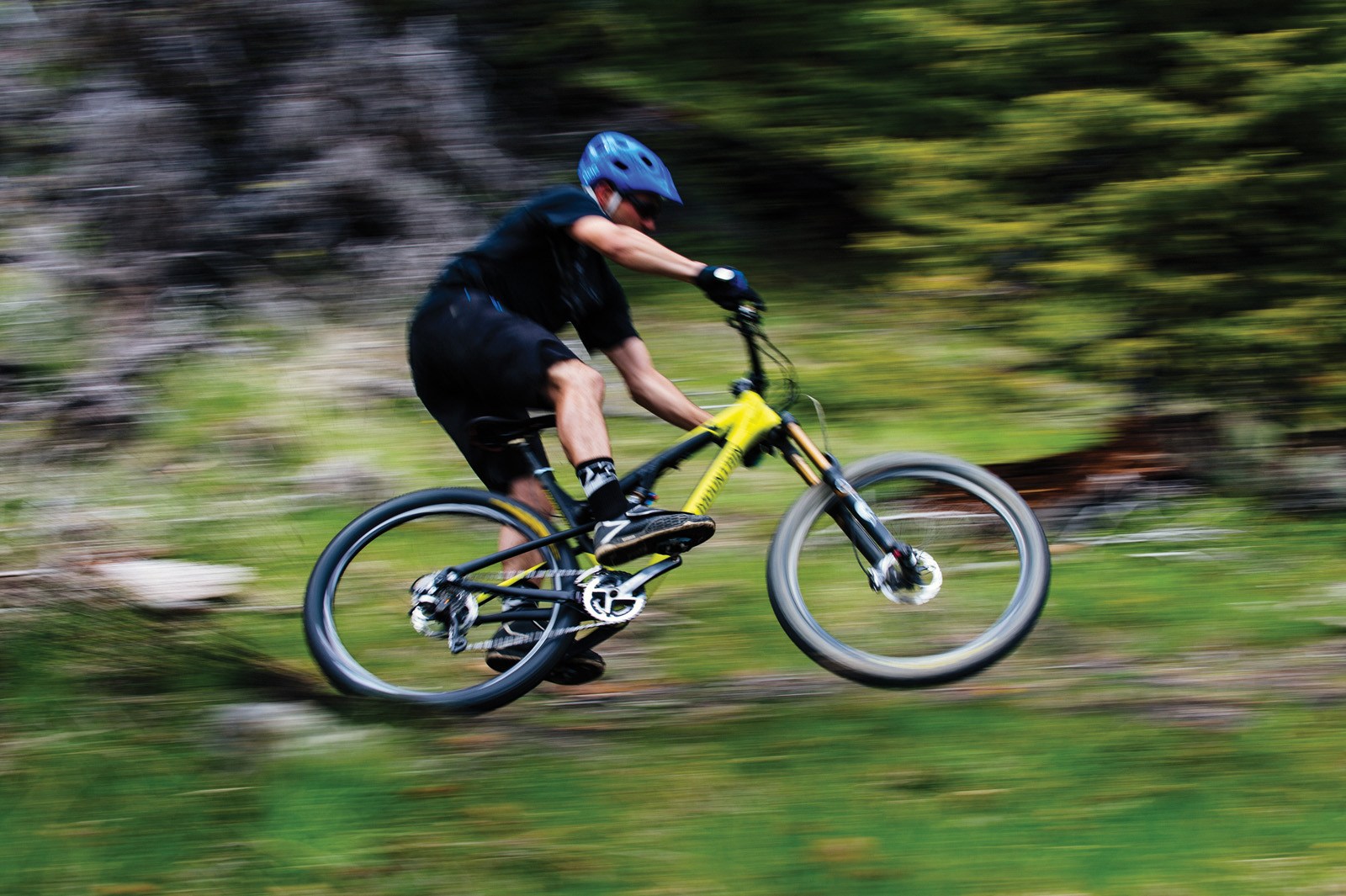 Thomas Vanderham tries to find out just how fast a Thunderbolt really is.

So who else is now digging through the couch cushions for loose change?

So do Rockys still sport a falling rate rear suspension?