Last winter was a particularly nasty and snowy one here in south west BC, and found me logging hard miles on one of the burliest 650B all-mountain bikes in production. This year, instead of throwing myself into the steep, slippery teeth of the North Shore mountains, I was hoping to spend my dark-and-short riding days on something that would be content with, and well suited to, longer rides at lower elevation.

Trek was keen to send us their freshly big-wheeled trail bike to review, and it seemed like perfect fit. The Fuel has been Trek’s popular trail bike all-rounder for over a decade, and I presumed the Fuel EX 9 29 would be perfectly suited to the Shore’s lower, pedalier trails, and riding destinations further South.

Well if you hail from, have passed through, or even know anyone living near the North Shore, you’ll know that riding conditions have been all-time this winter: ignore the near-freezing temperatures and its like summer out there; even the highest elevation trails are clear and running great. Not wanting to waste these Halcyon days, I have been hauling Trek’s Fuel EX 9 29 to the upper reaches of the North Shore trail system and after a short adjustment period, despite my initial trepidation, early returns have been encouraging. 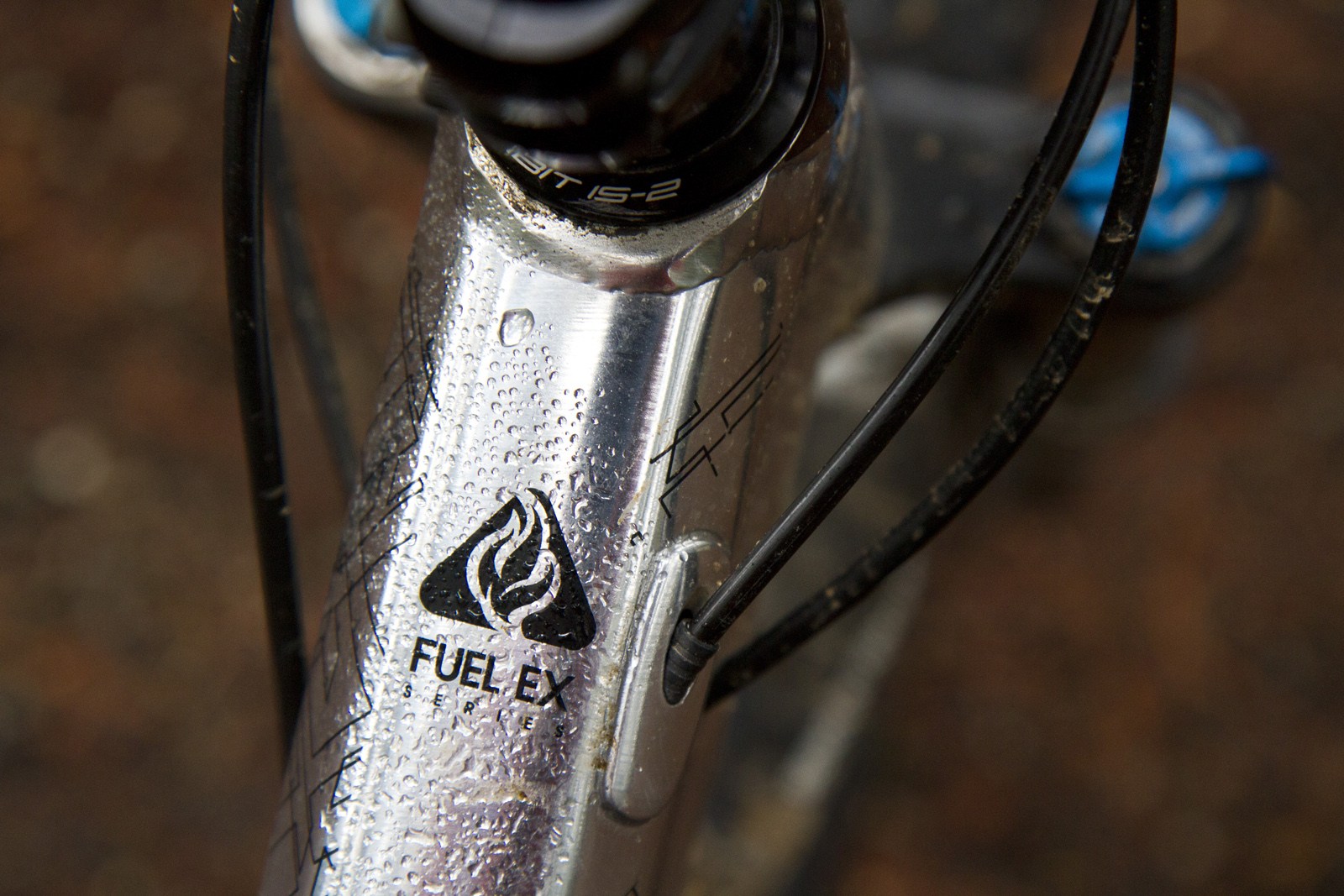 The 2014 Trek Fuel EX 9 29, like its bigger brother the Remedy 9 29 we reviewed last year, is brought to you in an eye catching high polish finish with subtle black accents. 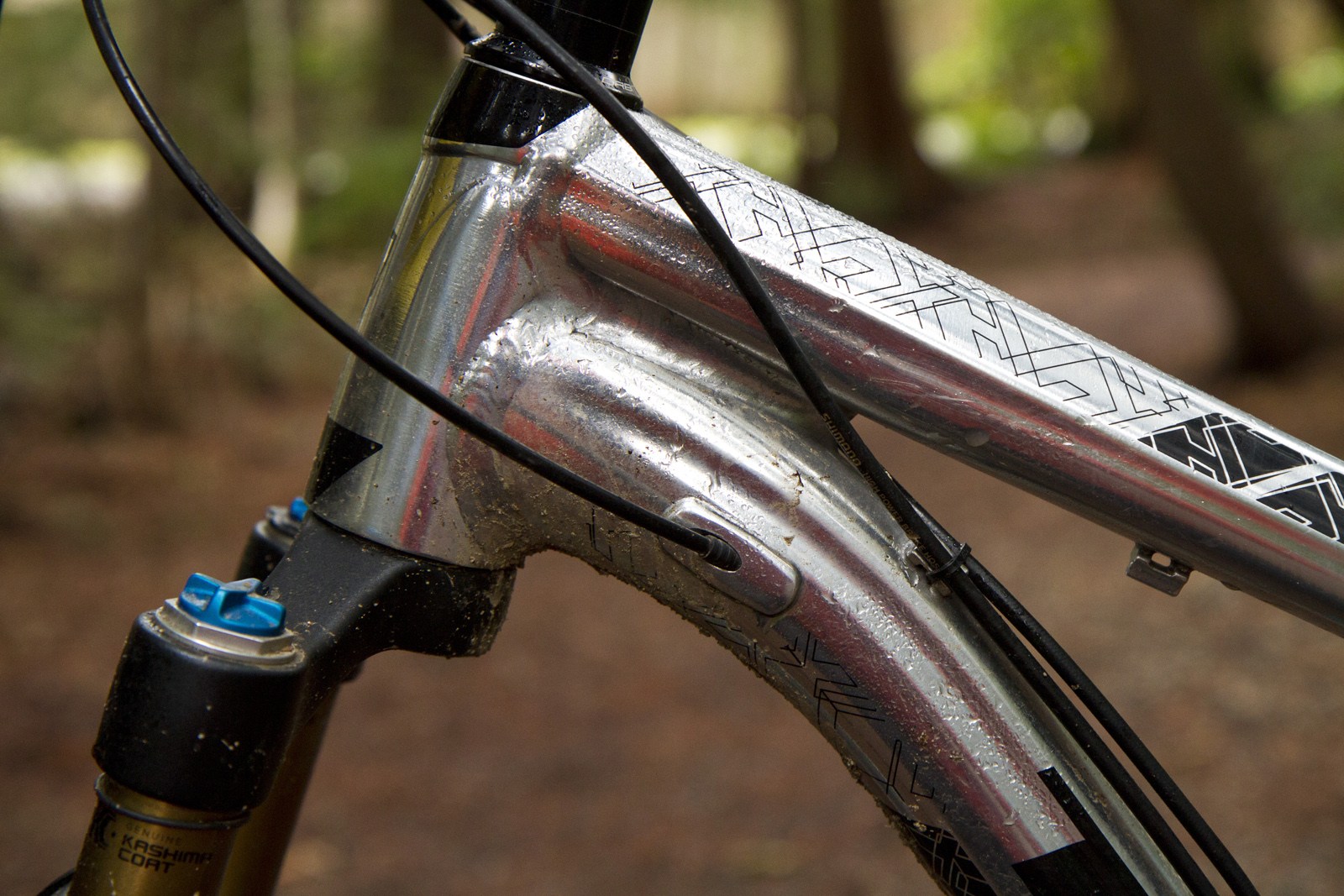 Internal cable routing where it makes sense (shifting), external where it doesn’t (hydraulic brake lines), and additional braze ons should you decide the stock spec isn’t for you. The internal headset is in keeping with the tidy theme, and/but contributes to a low stack height. 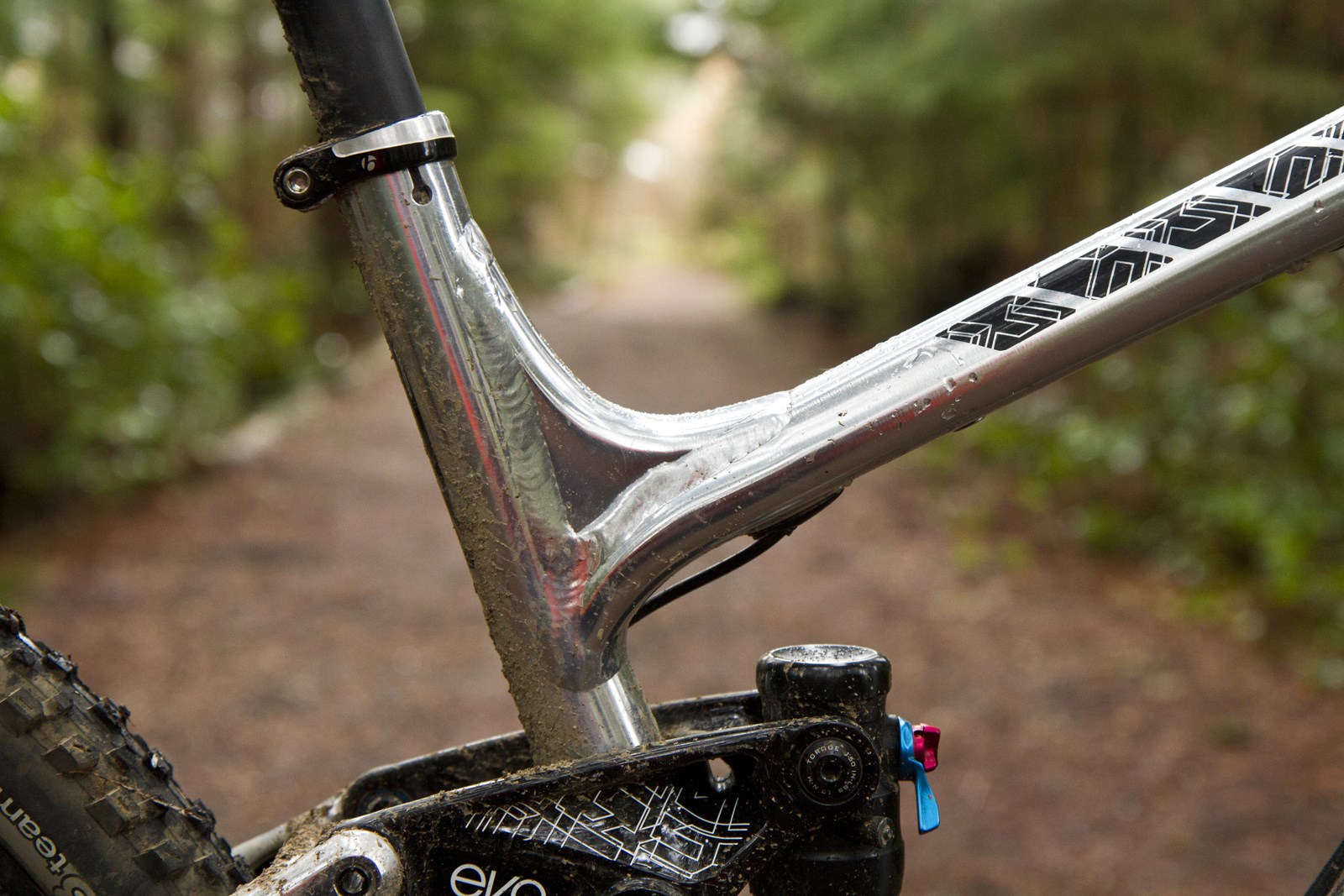 A slick gusset at the seat tube/top tube junctions means mucho standover clearance. Apparently it also contributes, as my wife noted, to “all the parts looking really far apart from each other.” 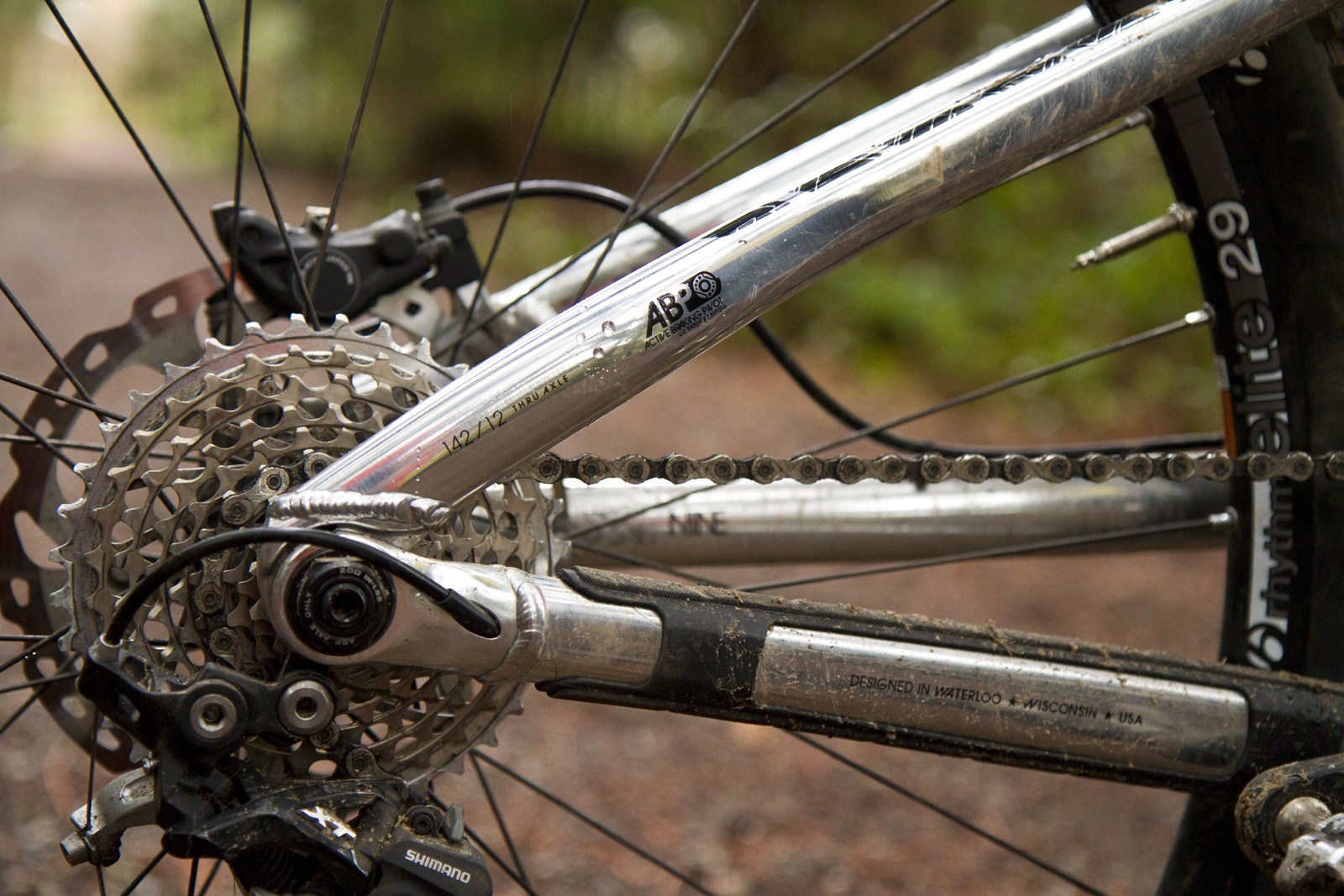 Trek pioneered the 142mm through axle, now quickly becoming an actual (as opposed to nominal) industry standard for trail bikes. The wheel axle doubles as the rear-most pivot for the Fuel’s four-bar ABP suspension design. All of this is carefully documented in shorthand on the bike’s seat stays in case you hit your head during a crash and need help explaining things to your first aid attendant. 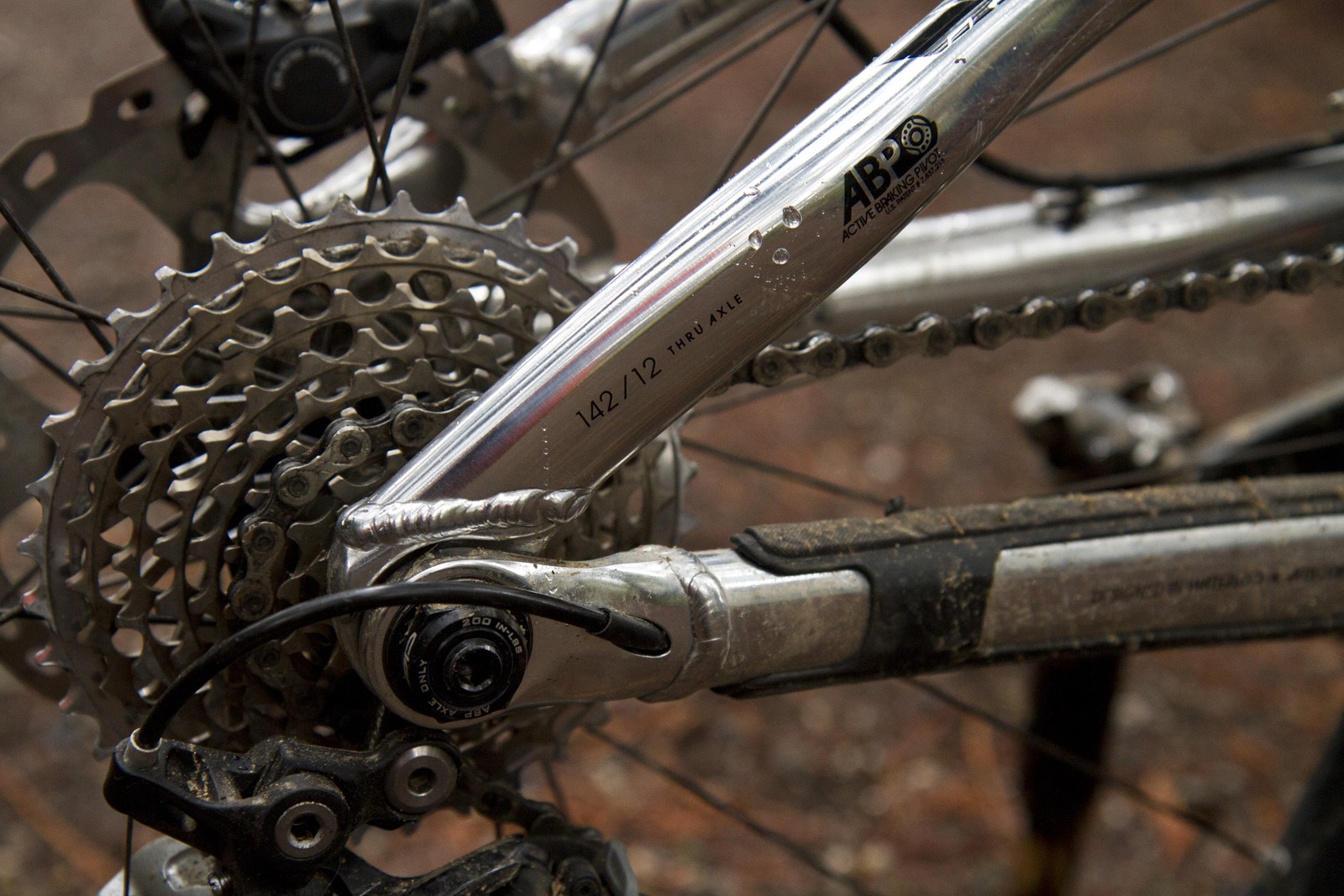 Internal routing for shifter housing and a stock chainstay guard keep the rear end (pronounced with a Swiss-German accent) nice and tidy. 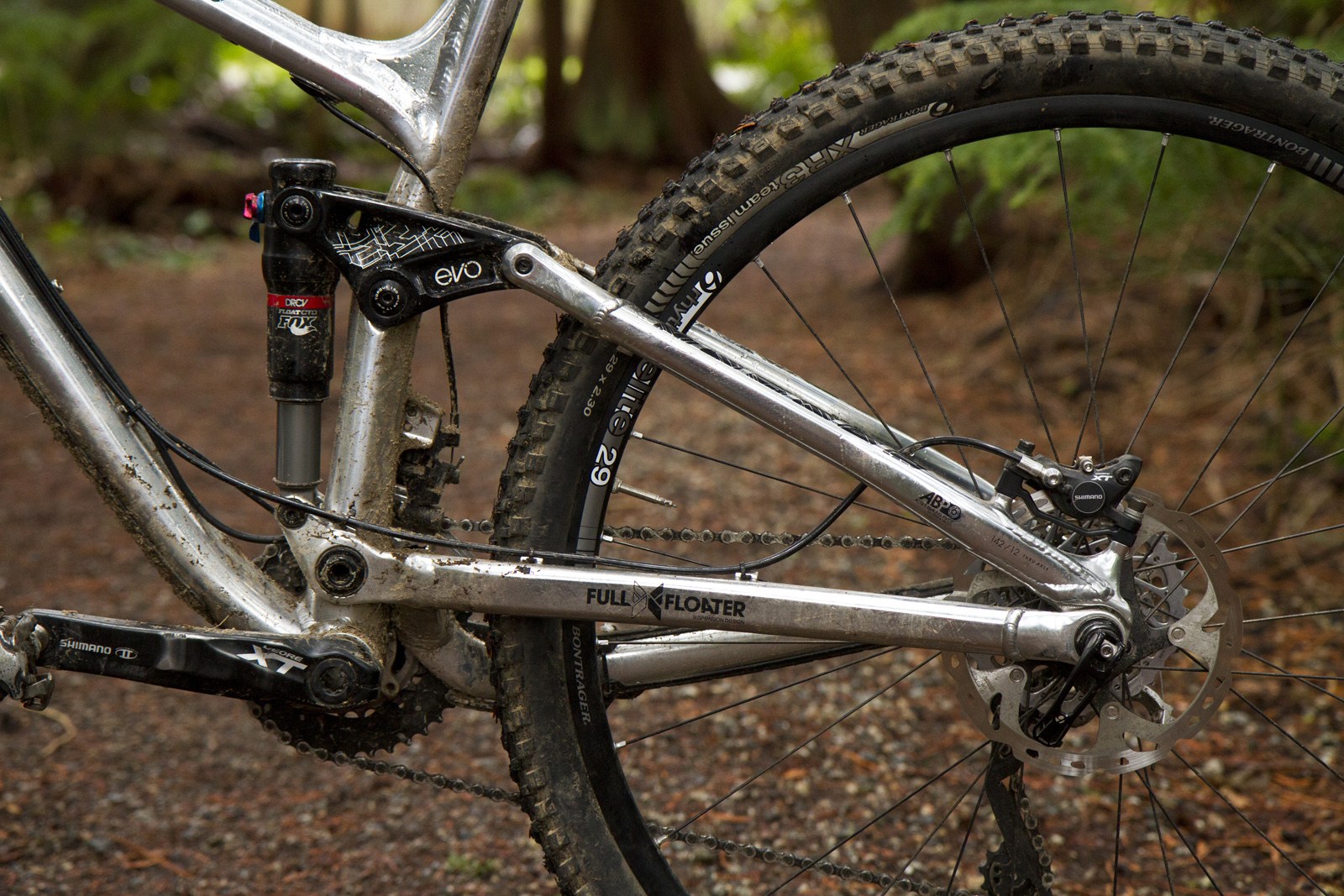 So may proprietary acronyms! Evo refers to the one-piece rocker link, which Trek claims provides improved stiffness and decreased weight over multi-piece rockers. Full Floater refers to the fact that the shock is connected to the rocker link above and the main swing-arm below, floating free of the frame and allowing Trek’s suspension designers to tinker and tune the rear suspension to their hearts’ content. 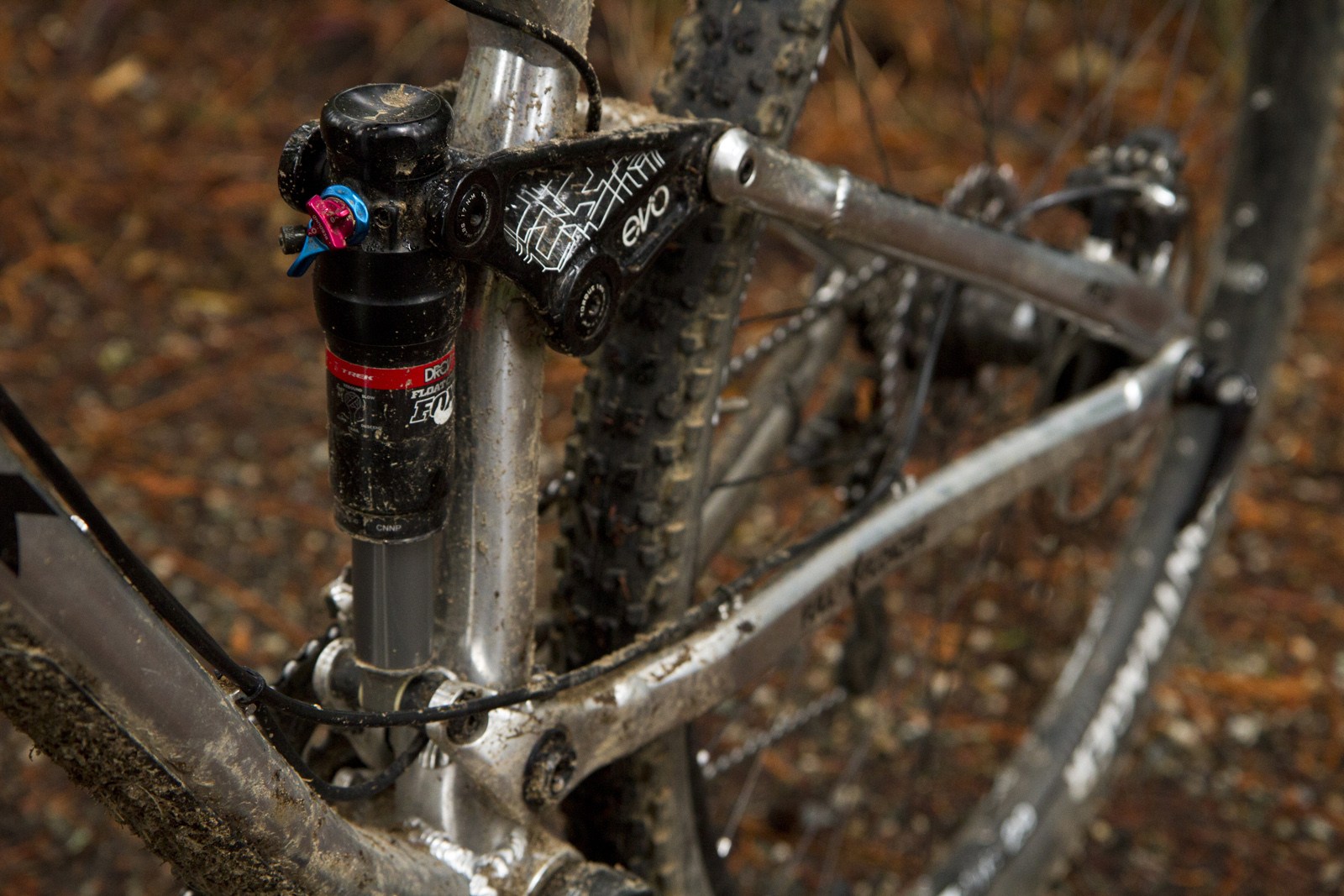 Dat damper! It’s a Trek-designed, Fox-built variation on the standard float air spring dubbed DRCV (Dual Rate Control Valve), which uses two chambers – a low-volume main chamber, and a secondary, high-volume chamber that is engaged when the shock enters the second half of it’s travel – to keep the bike feeling tight and responsive in most conditions while providing more cushion and control in the face of large or repeated impacts. 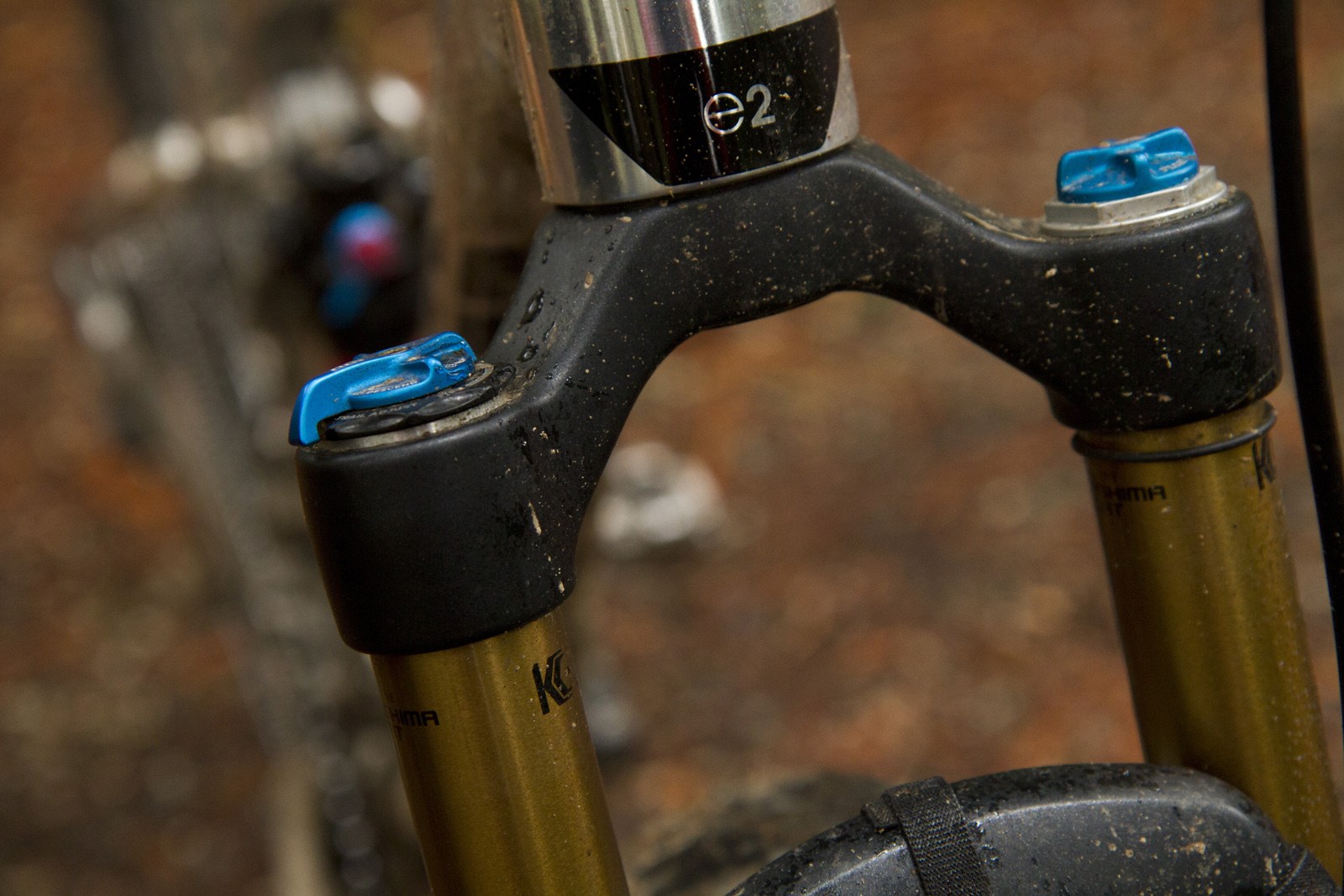 Trek no longer specs a proprietary DRCV air spring in the suspension forks on their bikes, having found that Fox’s updated CTD damper provides similar performance in a simpler, cheaper package. The Fuel EX 9 29’s Fox 32 gets the Kashima treatment and a tapered steer tube – yet another Trek innovation (they still call it E2) that seems to have become an industry standard. 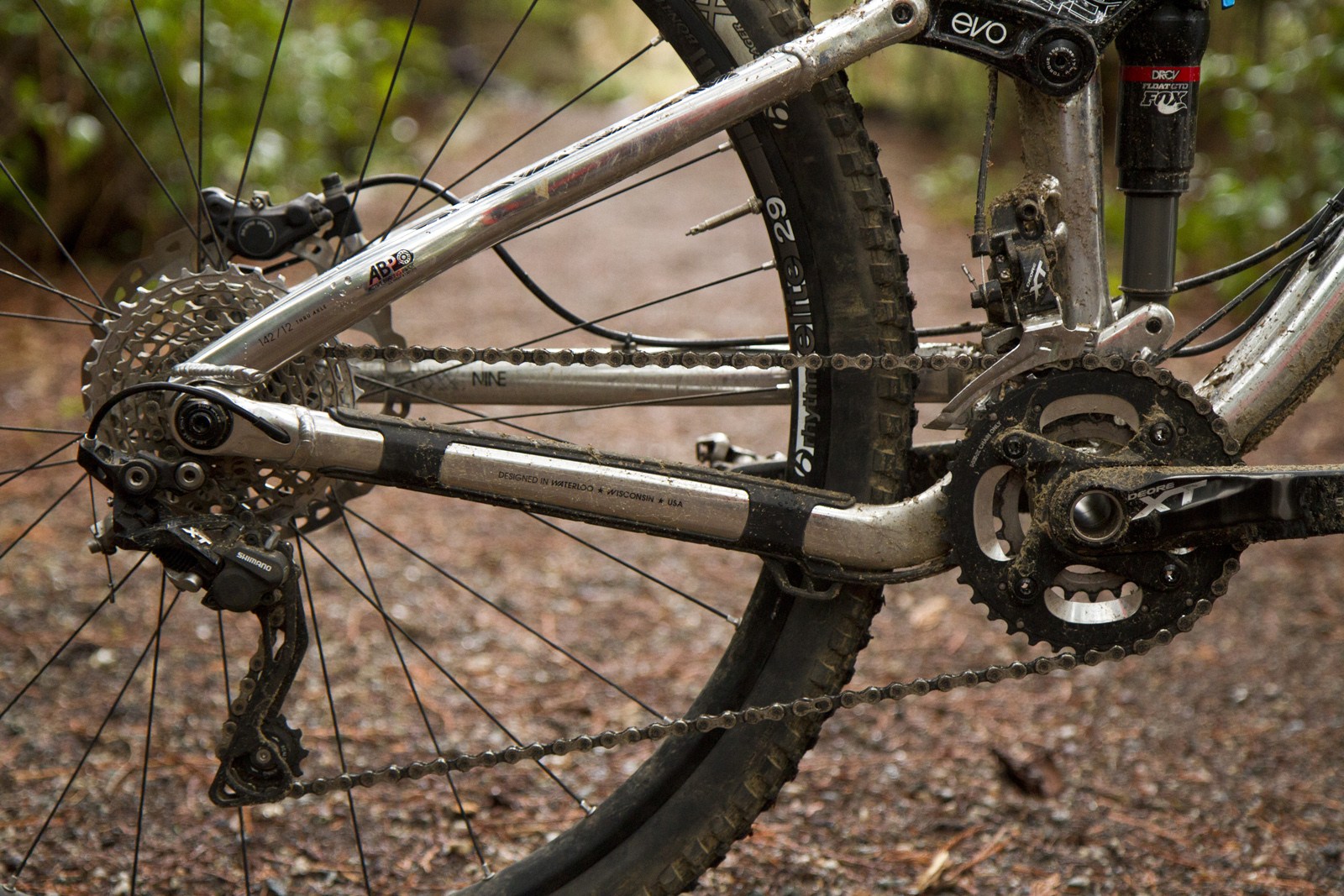 Full Shimano guts! If you’re a fan of the big S and don’t have a money tree in your backyard, XT front and rear is probably what you’re after. I’m not sold on the 2×10 cranks for local riding, but it’s hard to argue with the range of gears they provide. An ISCG mount is hiding behind that big chain ring but a bash guard, sadly, is not. 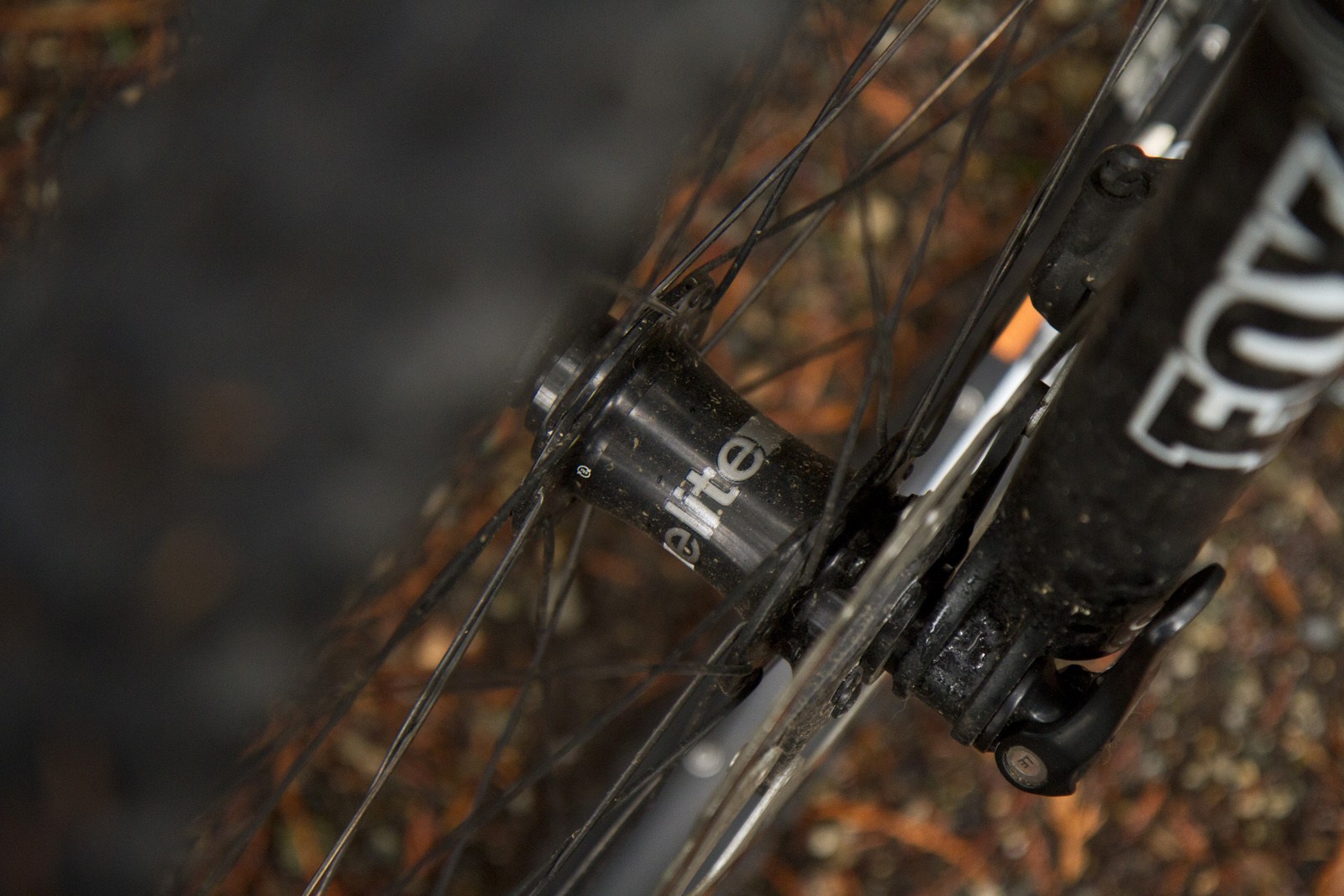 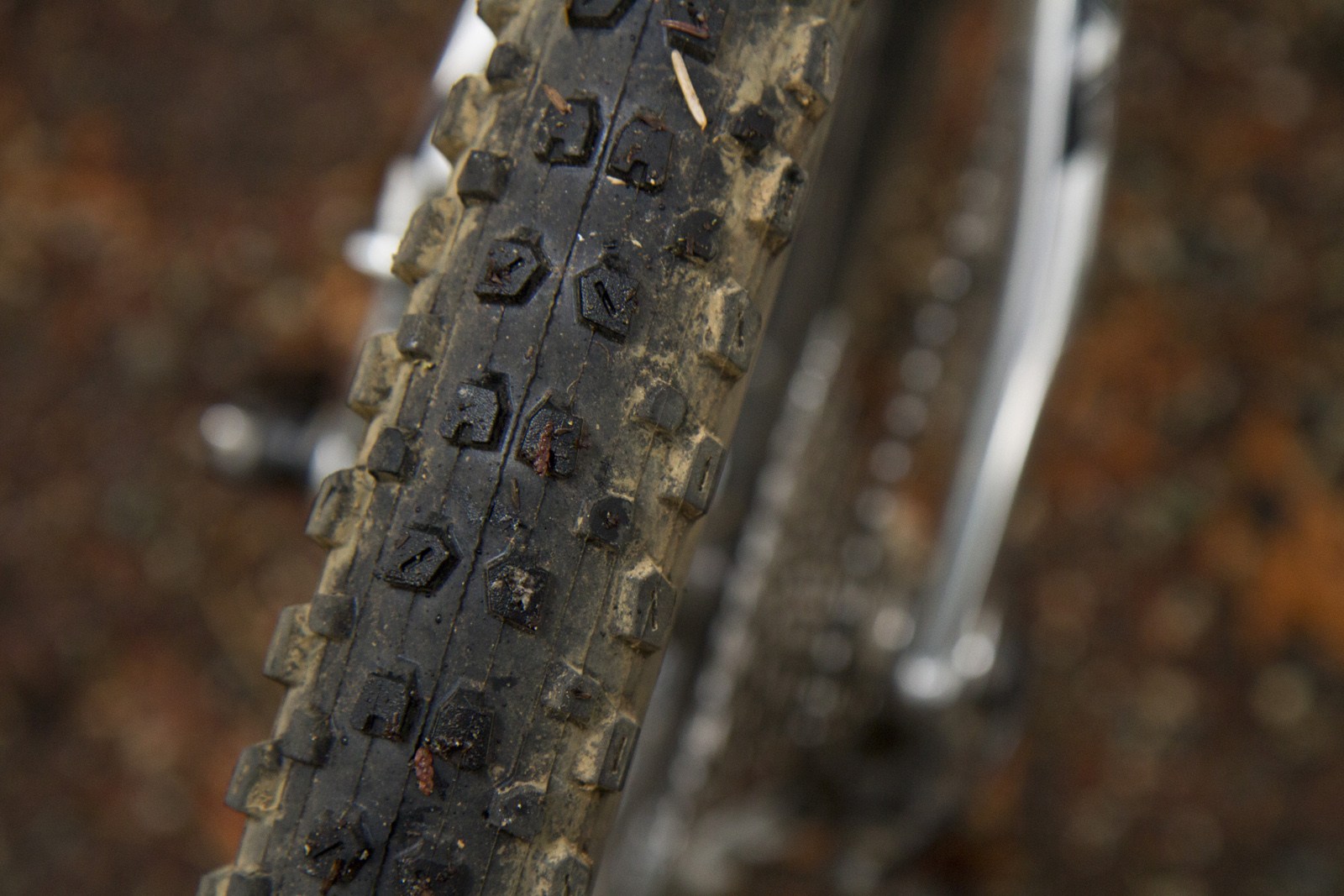 Bontrager, Trek’s house component brand, has been quietly upping their game when it comes to tire design. The 2.3″ XR3’s come stock on their trail bikes and purport to handle a wide range of trail conditions. Hopefully our local winter riding conditions fall somewhere within that range… 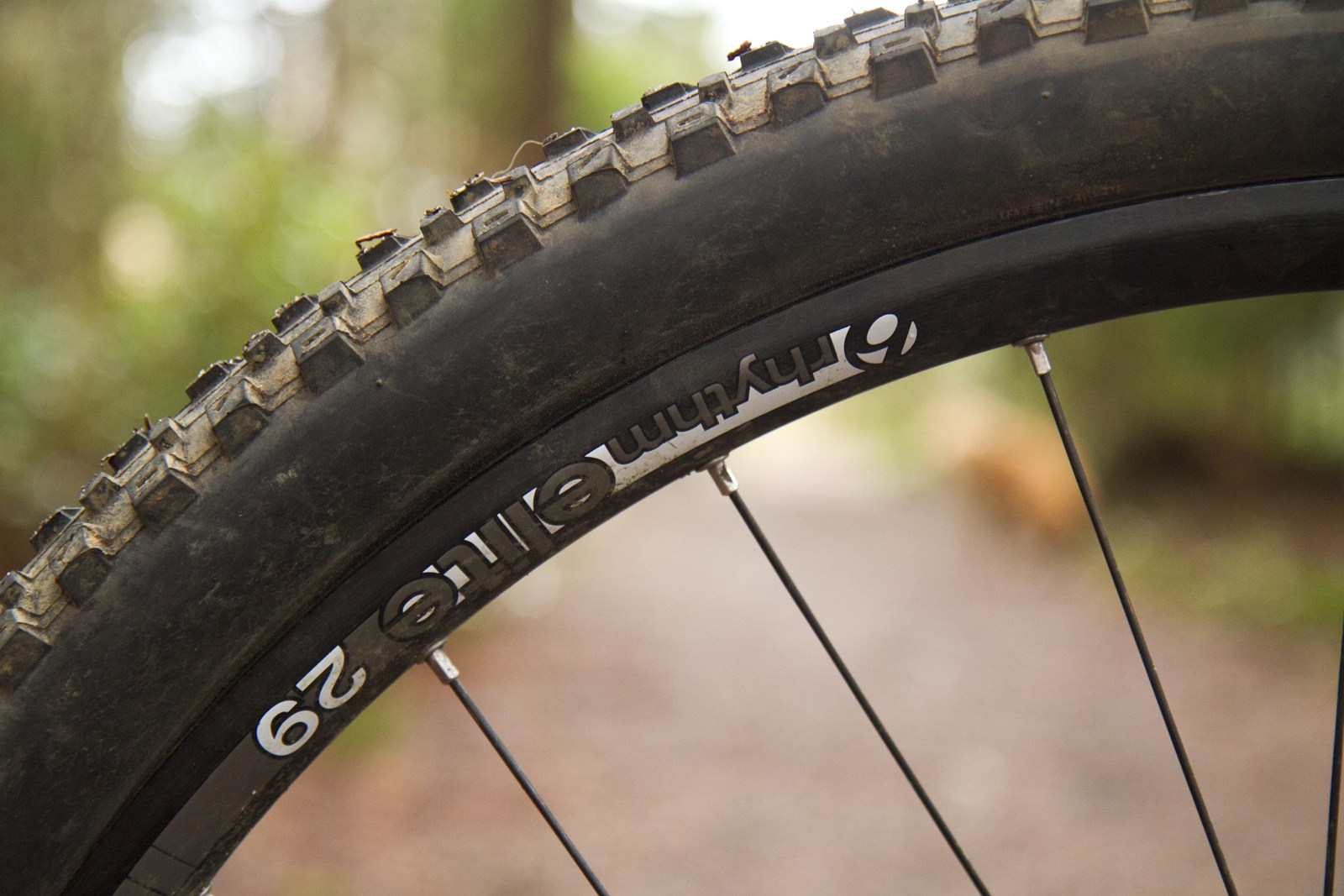 The good news is that Bontrager just announced a substantial redesign of their Rhythm Elite wheelset for 2014: decreased weight, more engagement points, all that good stuff. The bad news is that these wheels don’t look like the ones in the press release. 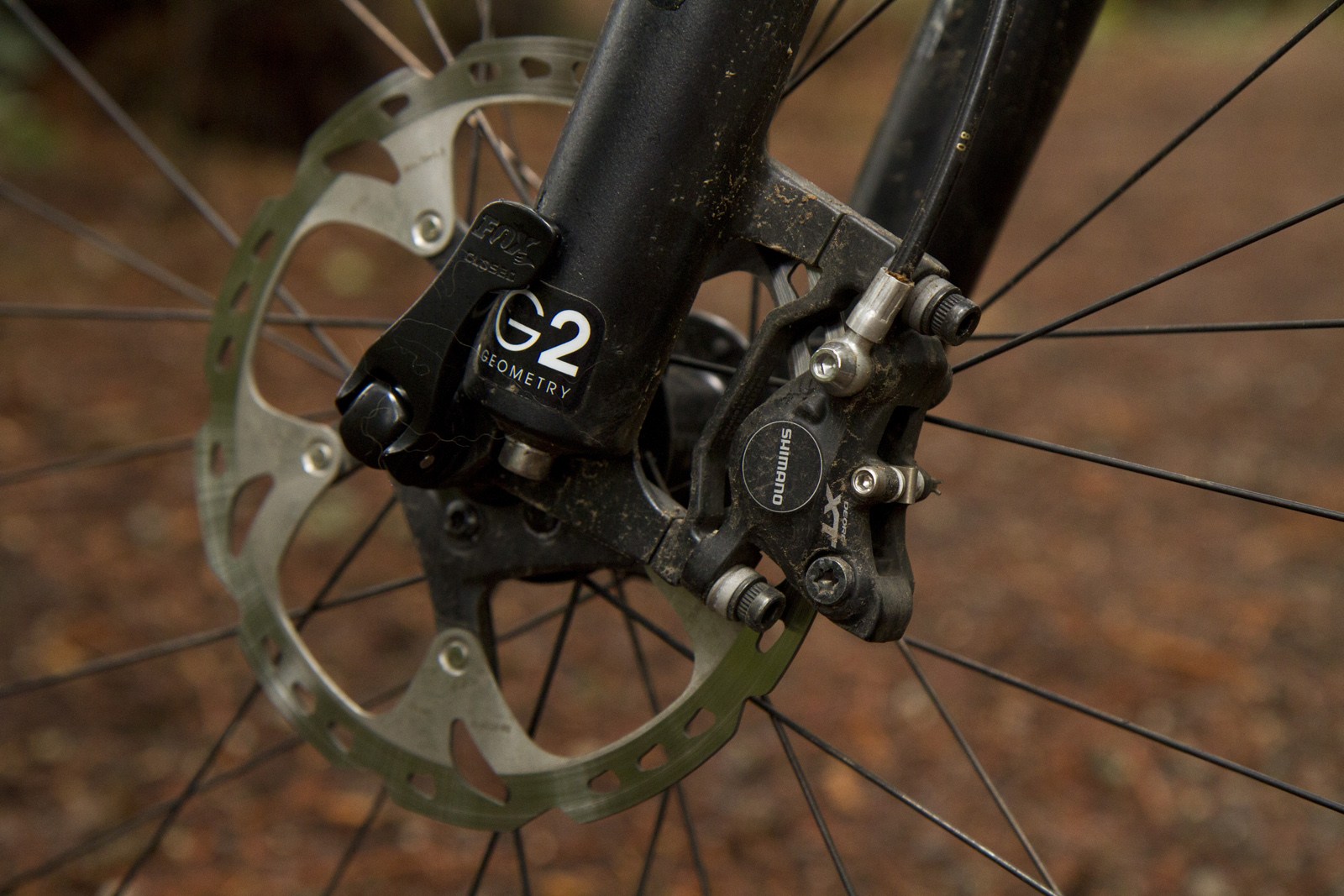 To hear Jeff Jones tell it, he gave Gary Fisher the idea of increasing fork offsets to give 29ers better low speed handling characteristics. Guess ol’ Gary may have to settle for being the founding father of mountain bikes. 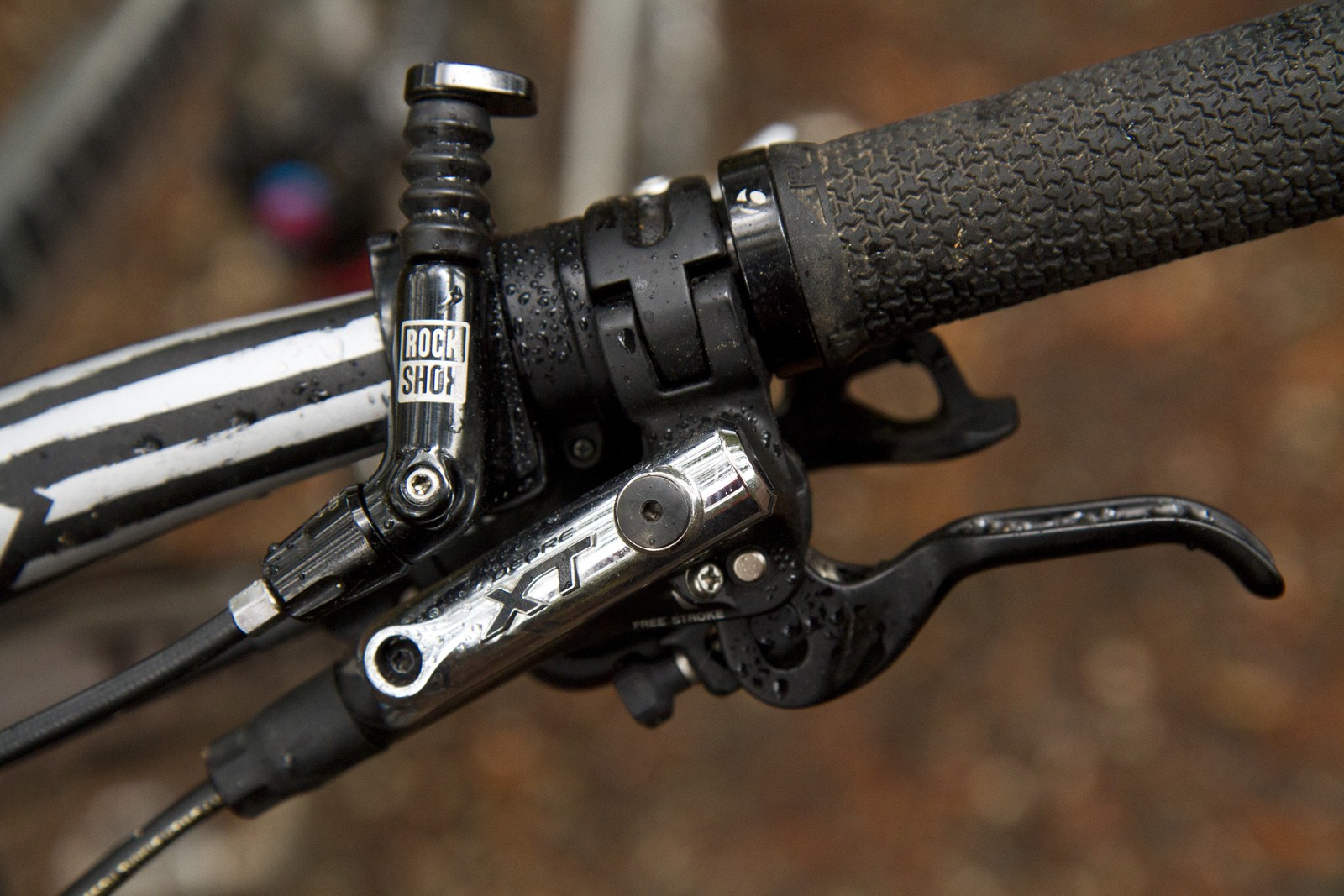 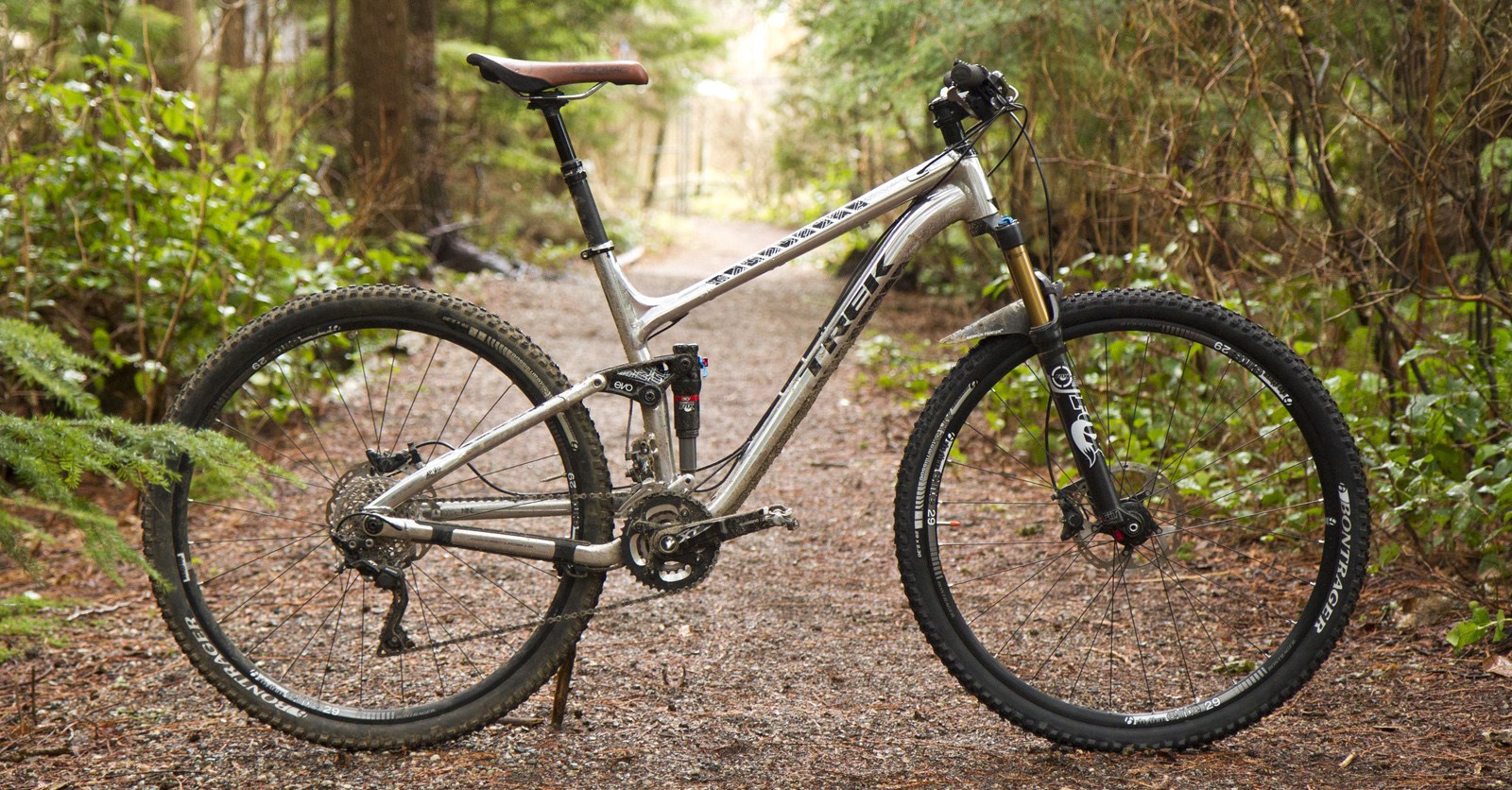 Trek’s 2014 Fuel EX 9 29. Captured here in front of the steepest climb on the North Shore, which only looks flat because that’s the way the bike treats it.

Can we look forward to a on bike review soon?

in fact, it's such a beautiful afternoon, i think i'll head out in a bit and work on it some more 😉

DRCV is not a damper, it is an air spring design.