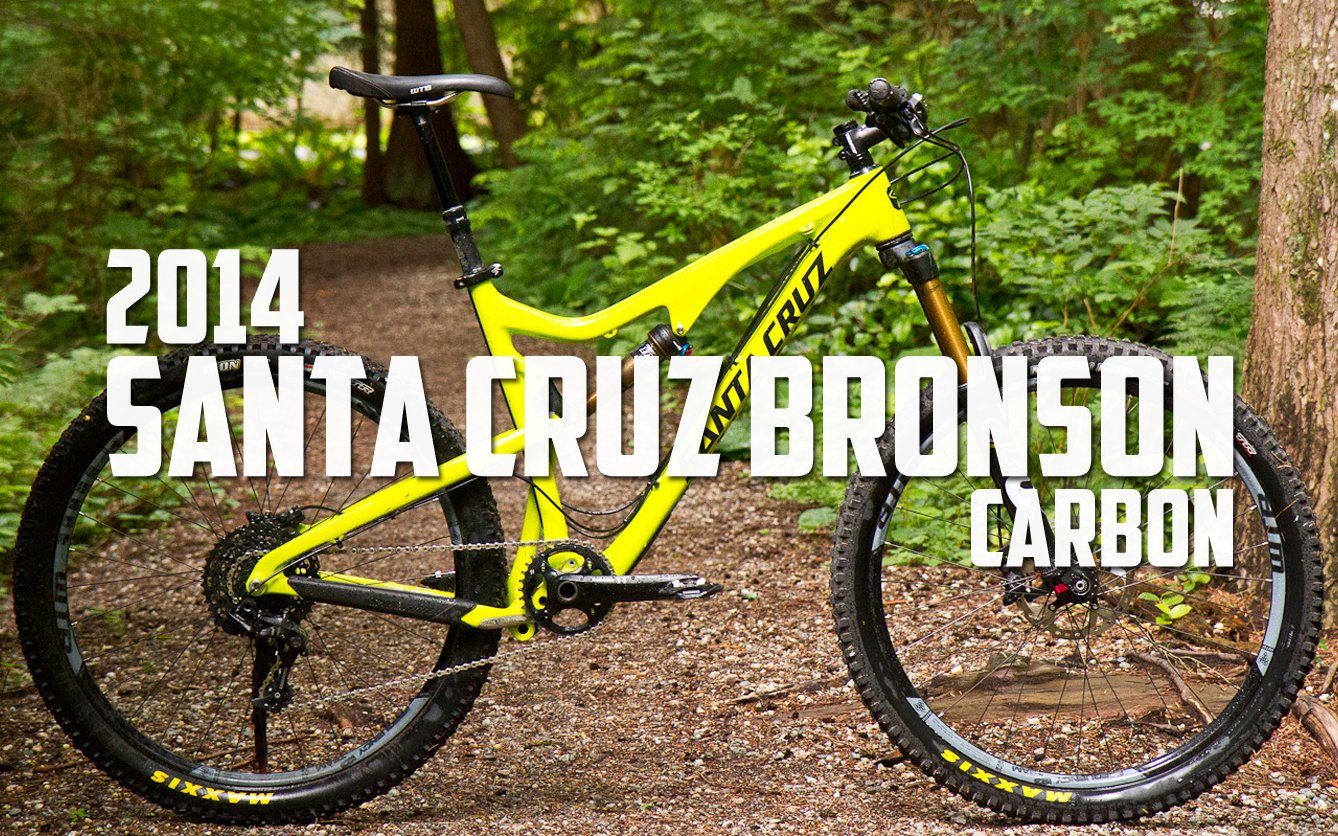 The 150mm Santa Cruz Bronson was introduced last year to great fanfare. It was Santa Cruz’s first 27.5″ wheeled bike and the market was eager to try out the wheel size on a hot looking full carbon VPP frame. A year later, the 165mm 3rd generation Nomad has taken the spotlight as the flashiest and newest in the Santa Cruz lineup, and 650B bikes have become standard rather than novelty. Where does the Bronson sit now? 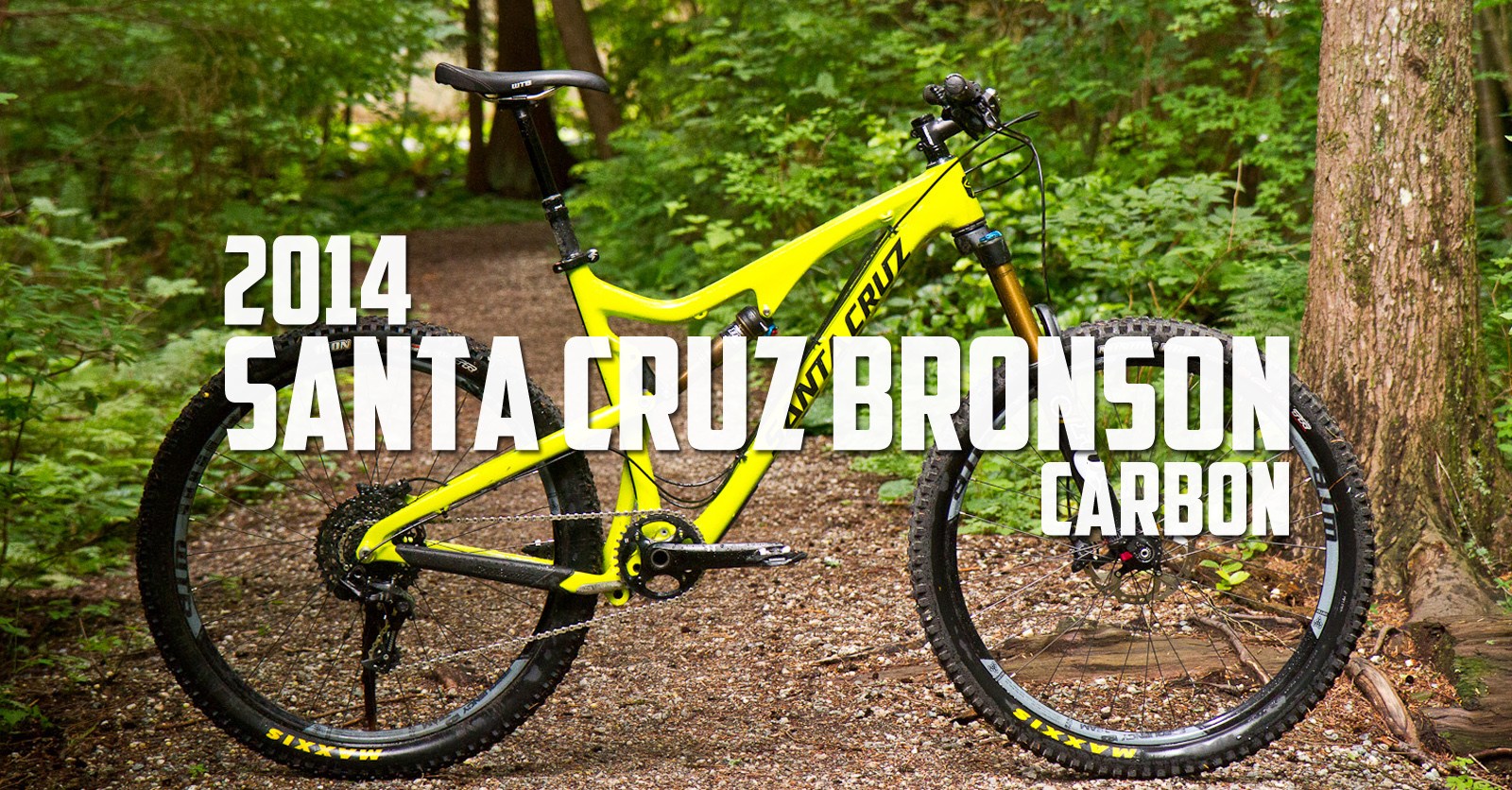 While Santa Cruz had three carbon bikes on the EWS circuit last year – the 160mm, 26″ V2 Nomad; the 135mm, 29″ Tallboy LT; and the 150mm, 27.5″ Bronson – it would seem as though the V3 Nomad was poised to take a chunk out of all three of those bikes. As a result, the first question that arose when I got the Bronson was what place it held in the lineup now that the new Nomad had arrived – and would it still live up to last year’s hype?

Having ridden the Bronson and the Nomad back to back, I can attest that the 150mm bike still retains its own character, and it might actually be more suited to my everyday riding style. Compared to the more gravity-focused character of the Nomad, the Bronson is a snappy and pedal-friendly bike that likes to go up as much as it likes to go down. The cockpit fits relatively small which had me fitting a larger bar to the stock 70mm stem, but that didn’t detract from the bike’s fun descending demeanour.

Having now spent enough quality time with the Bronson to get it dialed and learn its ins and outs, I’ll start with product photos, spec overview and initial impressions, to be followed up with a platform review and longer term thoughts shortly. 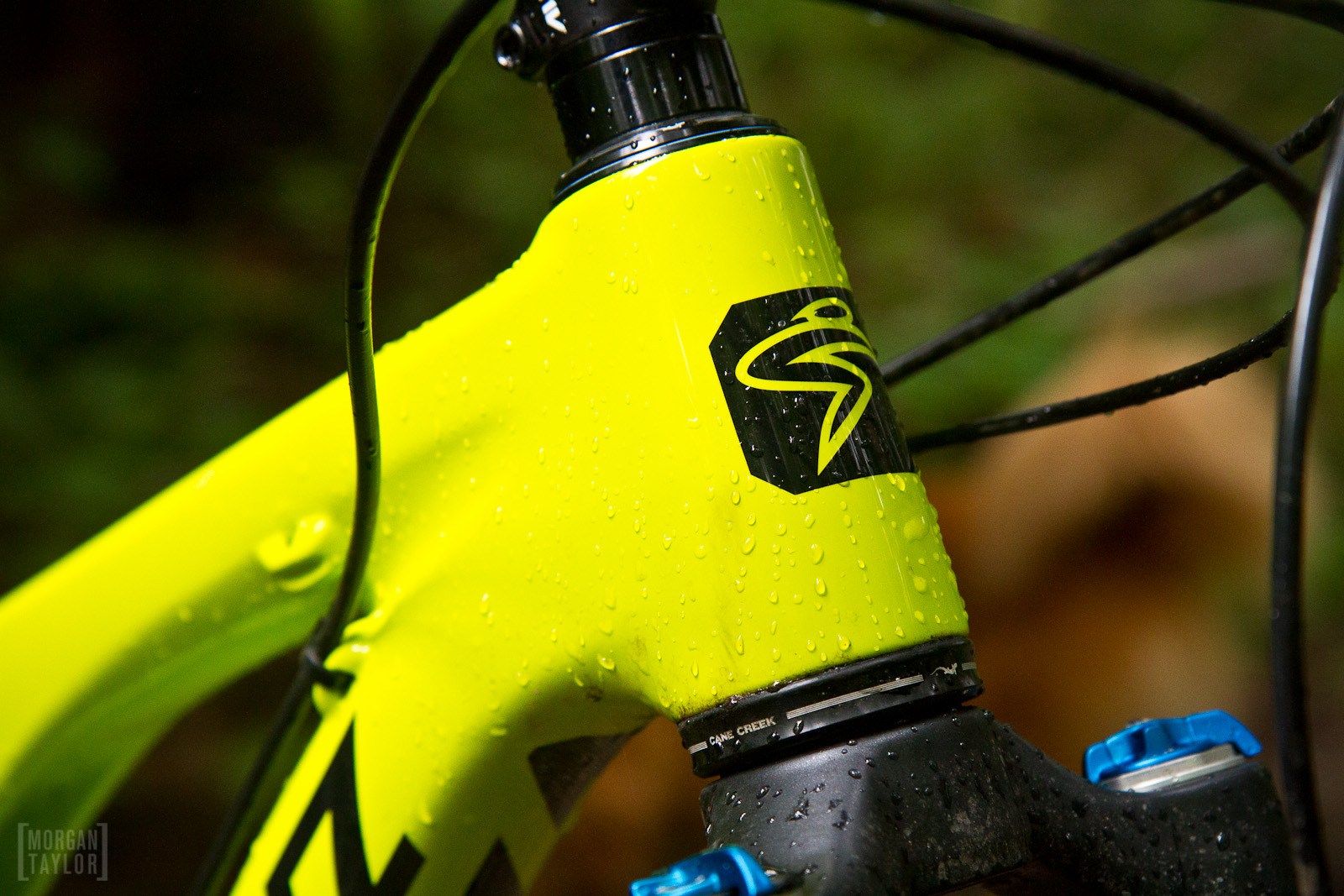 Santa Cruz backs up their boutique status with smooth carbon frames and clean graphics. Of course, an aluminum version is available if you’d like to spend the $1000 on a wheel upgrade instead. 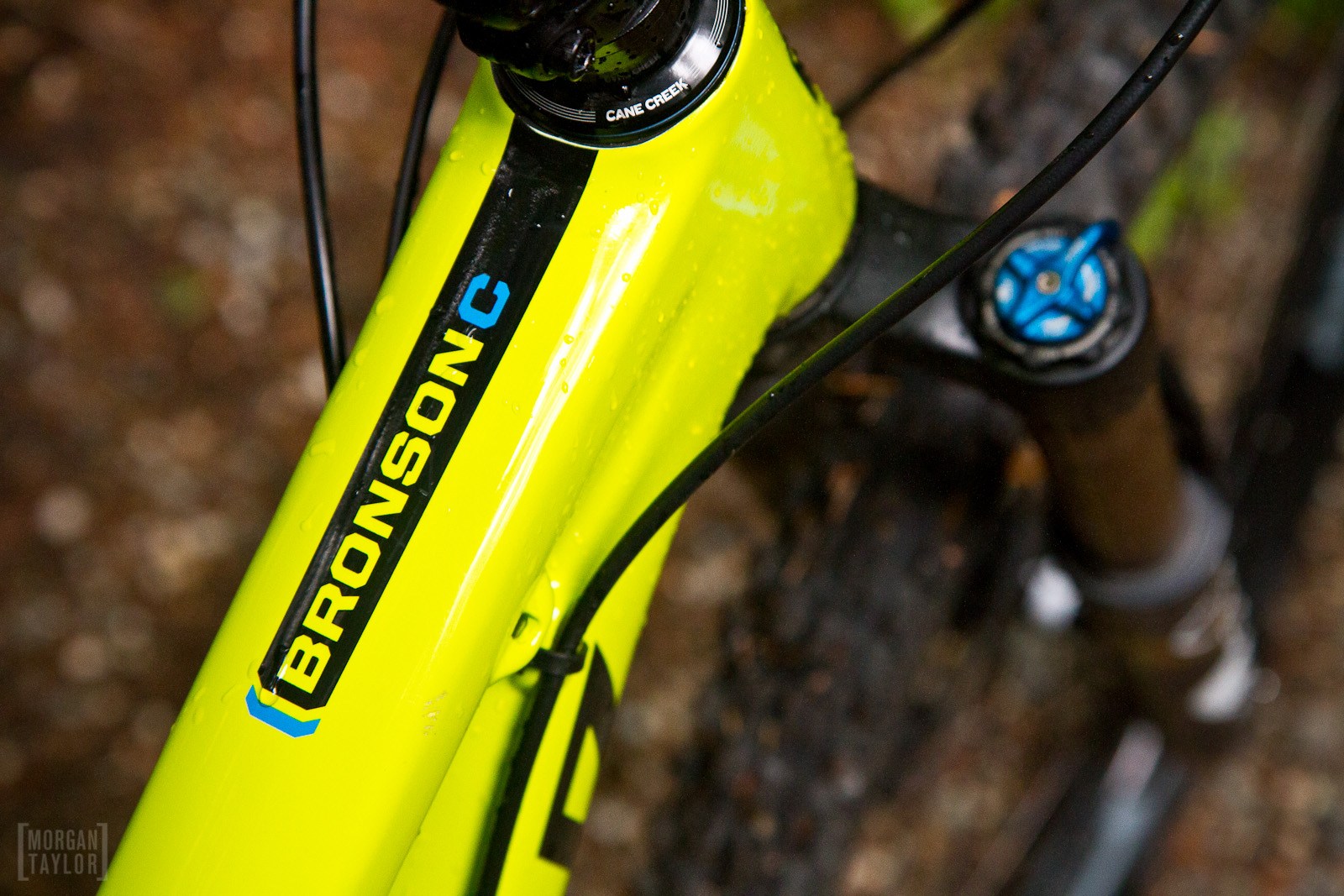 The Bronson was named for the street that Santa Cruz used to be located on, the C is for carbon, and this particular bike sports the X01 AM kit with Kashima upgrades. 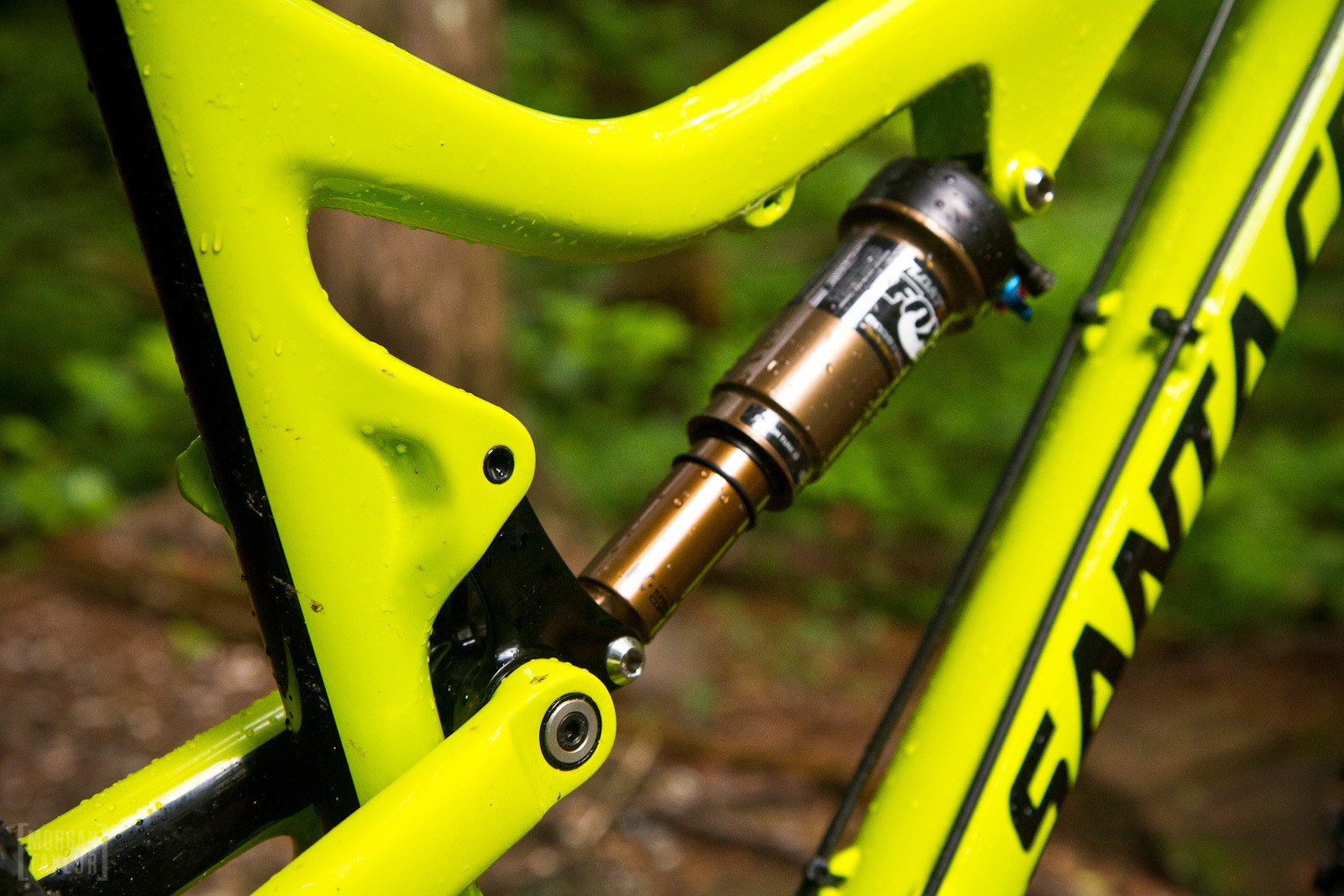 You won’t find a harsh angle on a Santa Cruz frame. 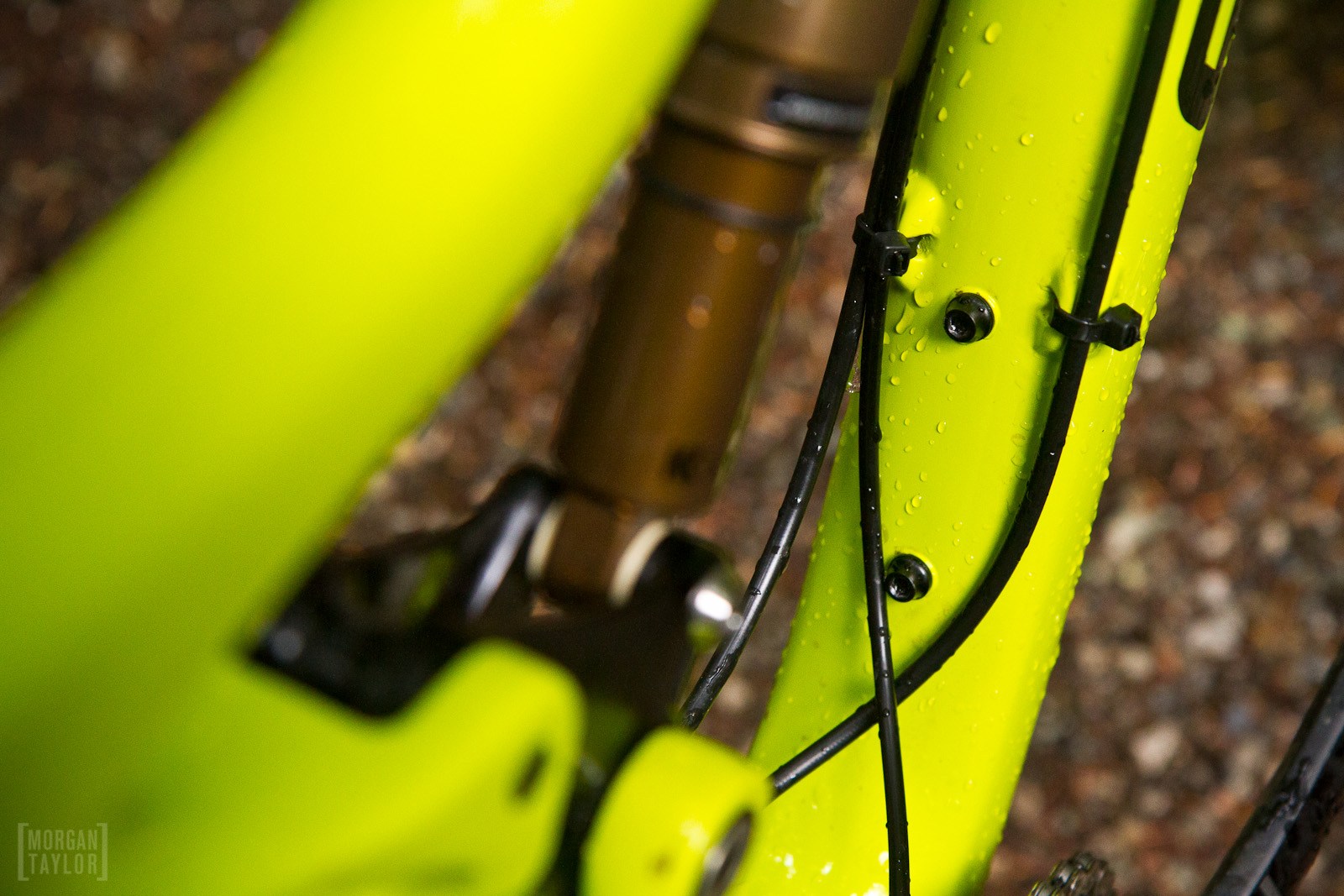 Bottle cage mounts inside the front triangle are appreciated. 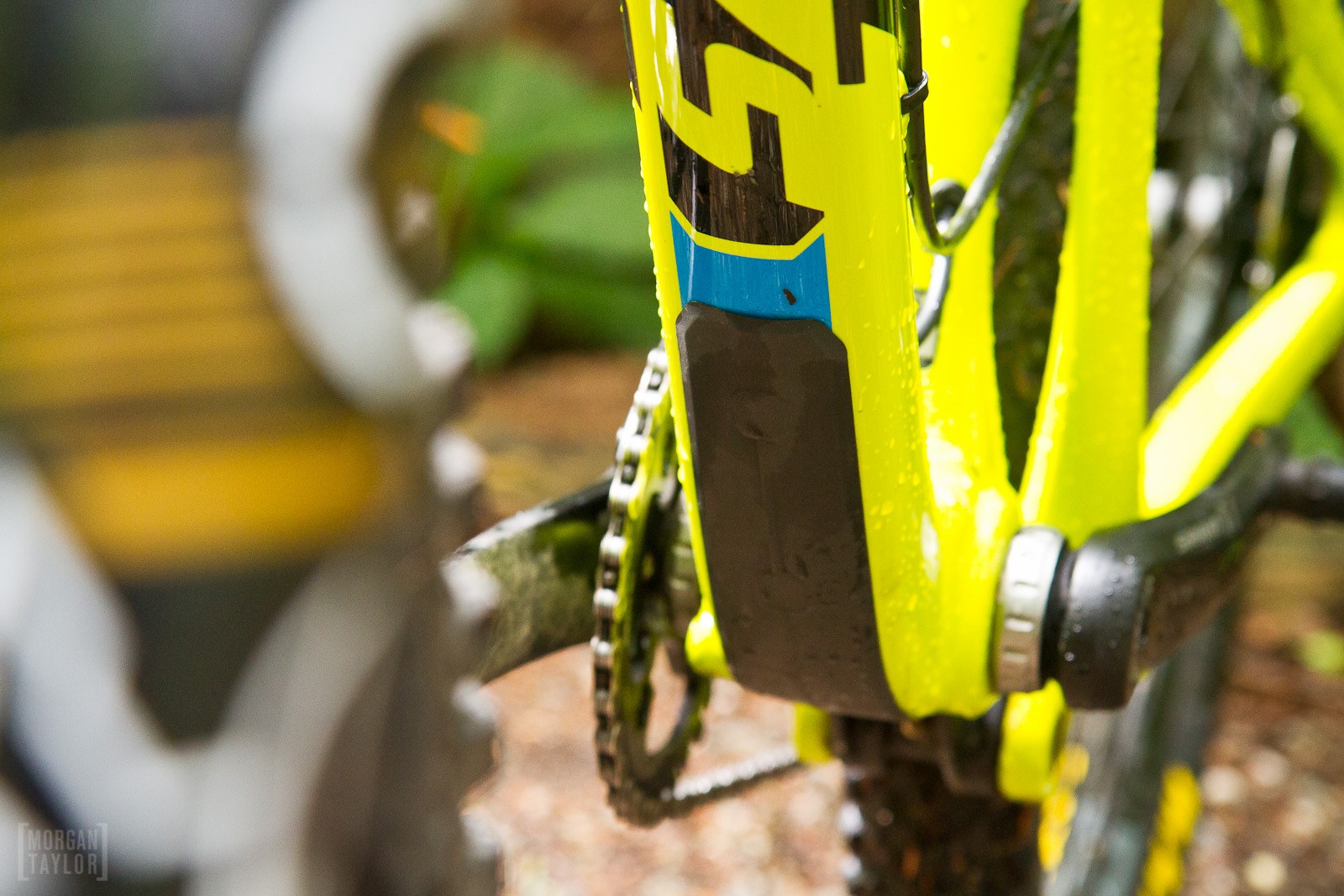 Nicely integrated downtube protection ahead of the threaded bottom bracket. 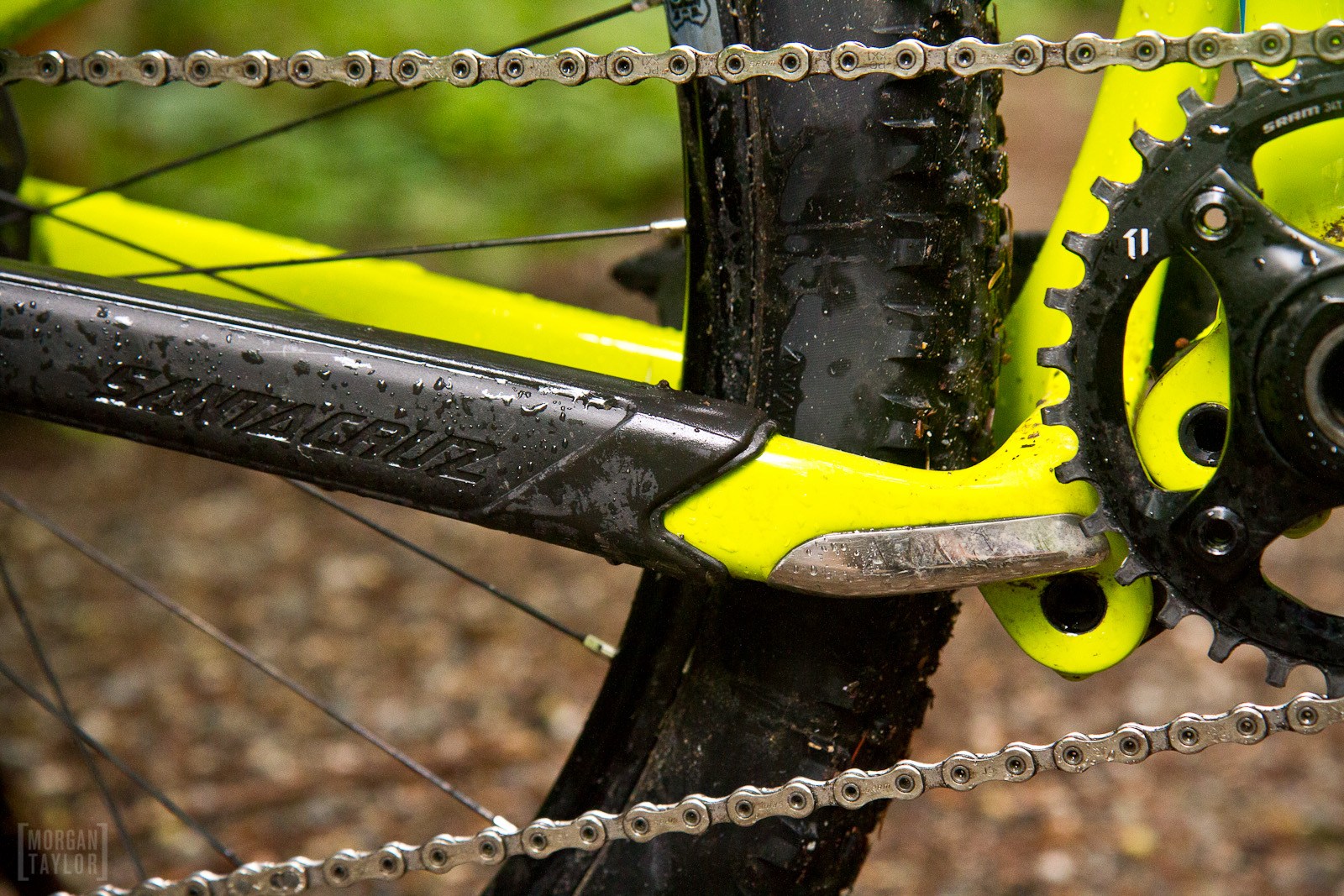 And that same smoothness continues to the rear end, where a metal plate protects from jammed chains and a rubber chainstay protector keeps things quiet and chip-free. This is by far the quietest bike I’ve ridden in recent memory. 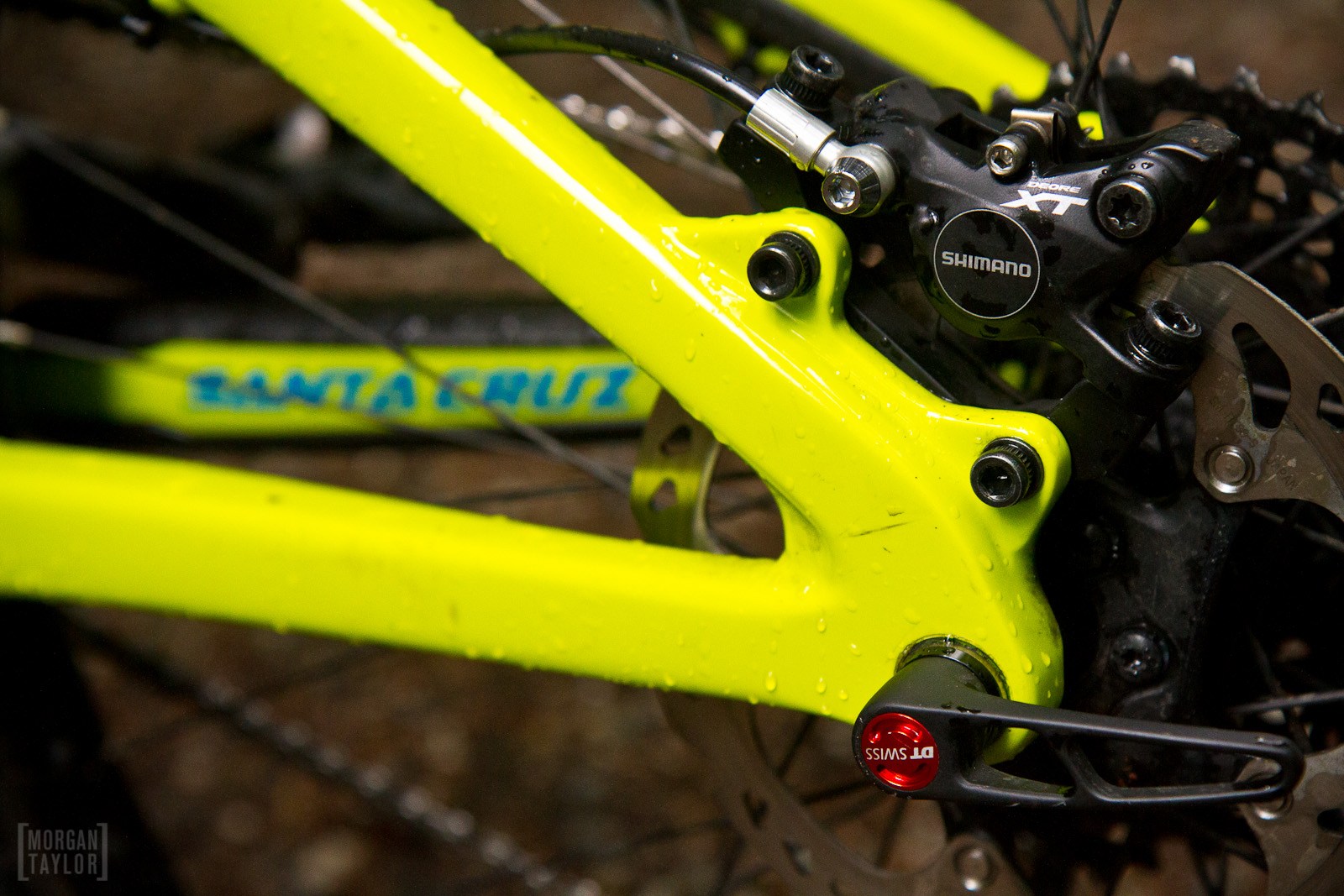 More smooth lines out back and a DT Swiss through axle. 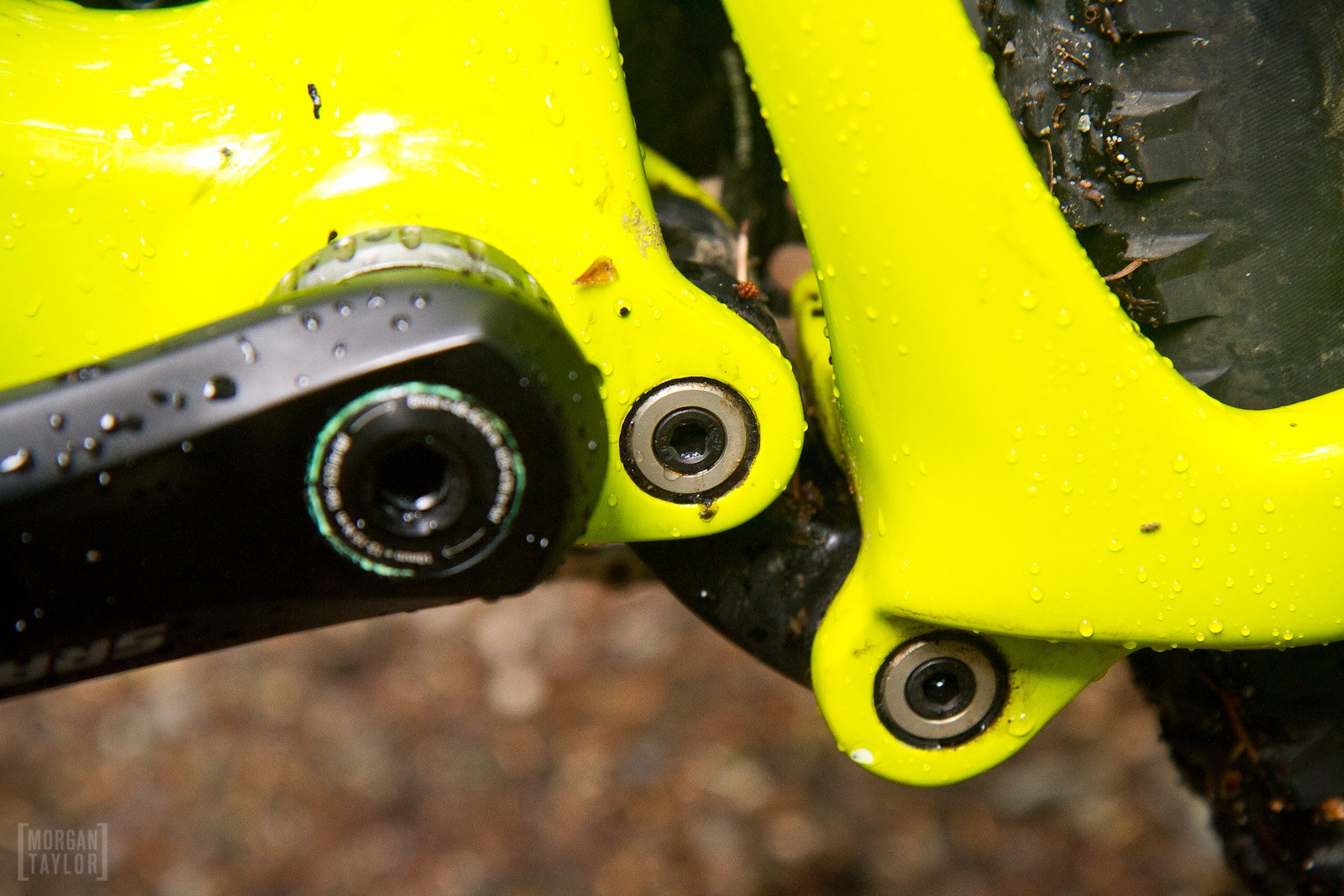 Santa Cruz’s collet axle system is one of the cleanest hardware solutions on the market. 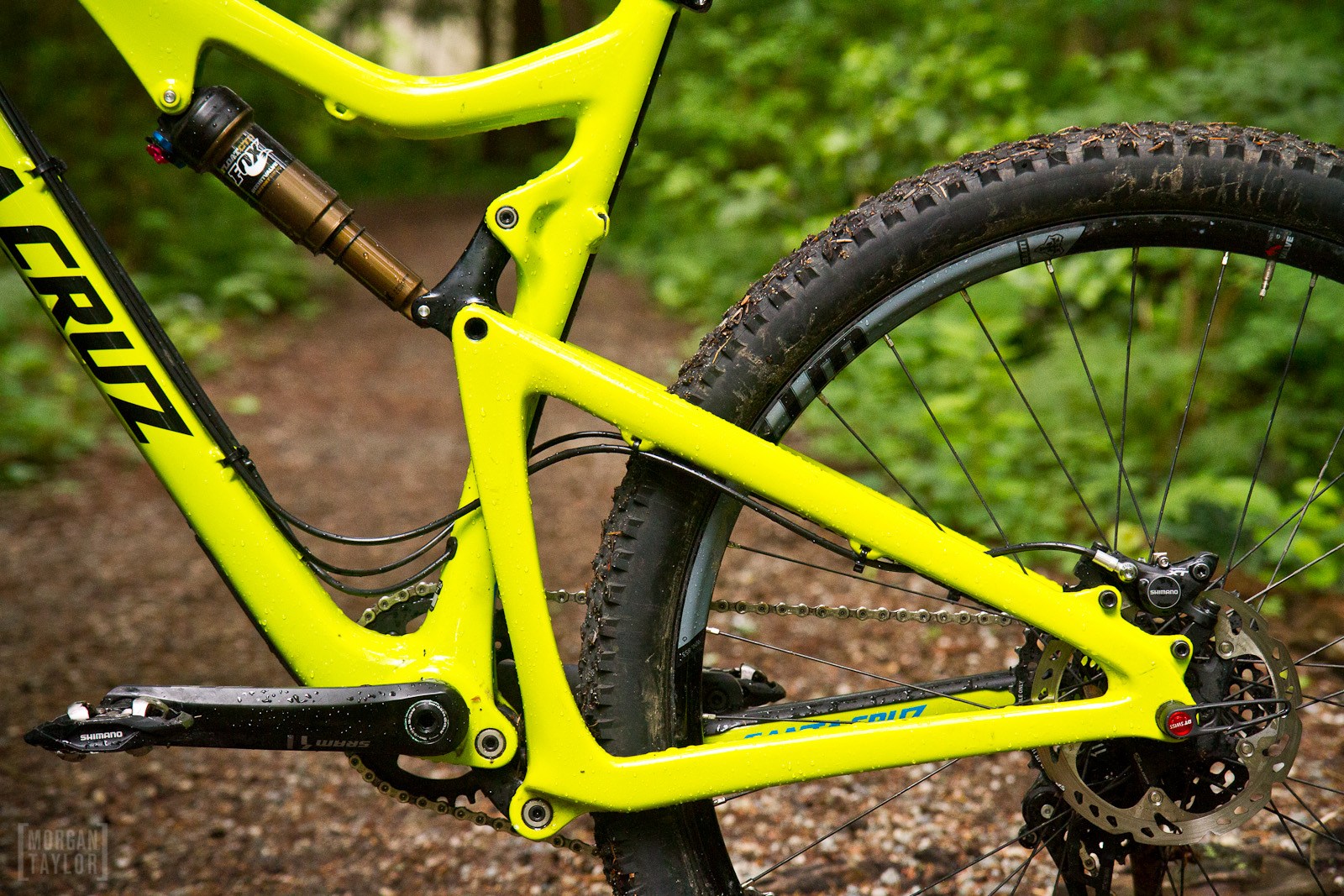 The VPP rear end is stiff, and, did I mention, amazingly quiet? The combination of tight tolerances, vibration damping full carbon frame, and 1x drive mean the only thing you can hear is tires on dirt. 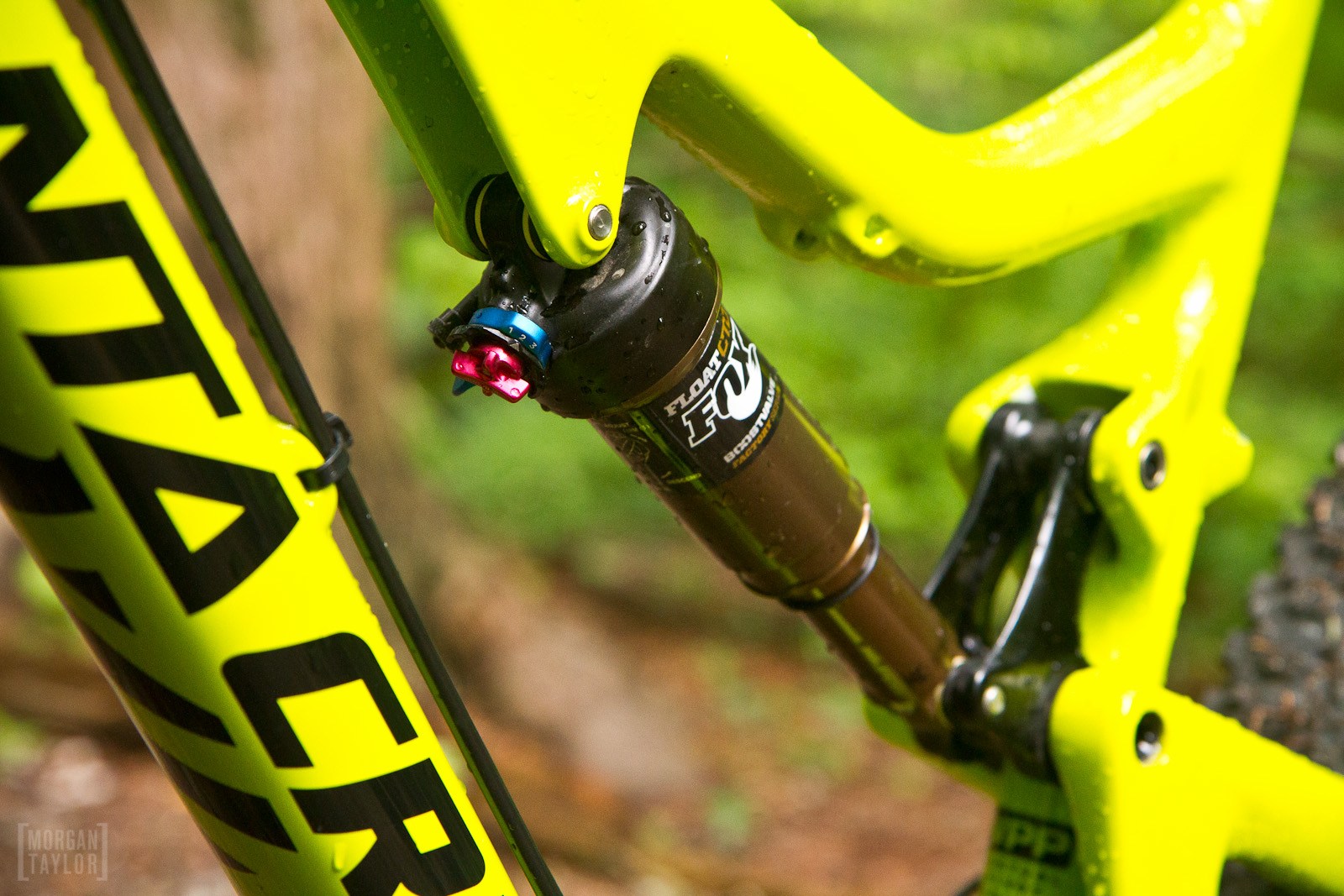 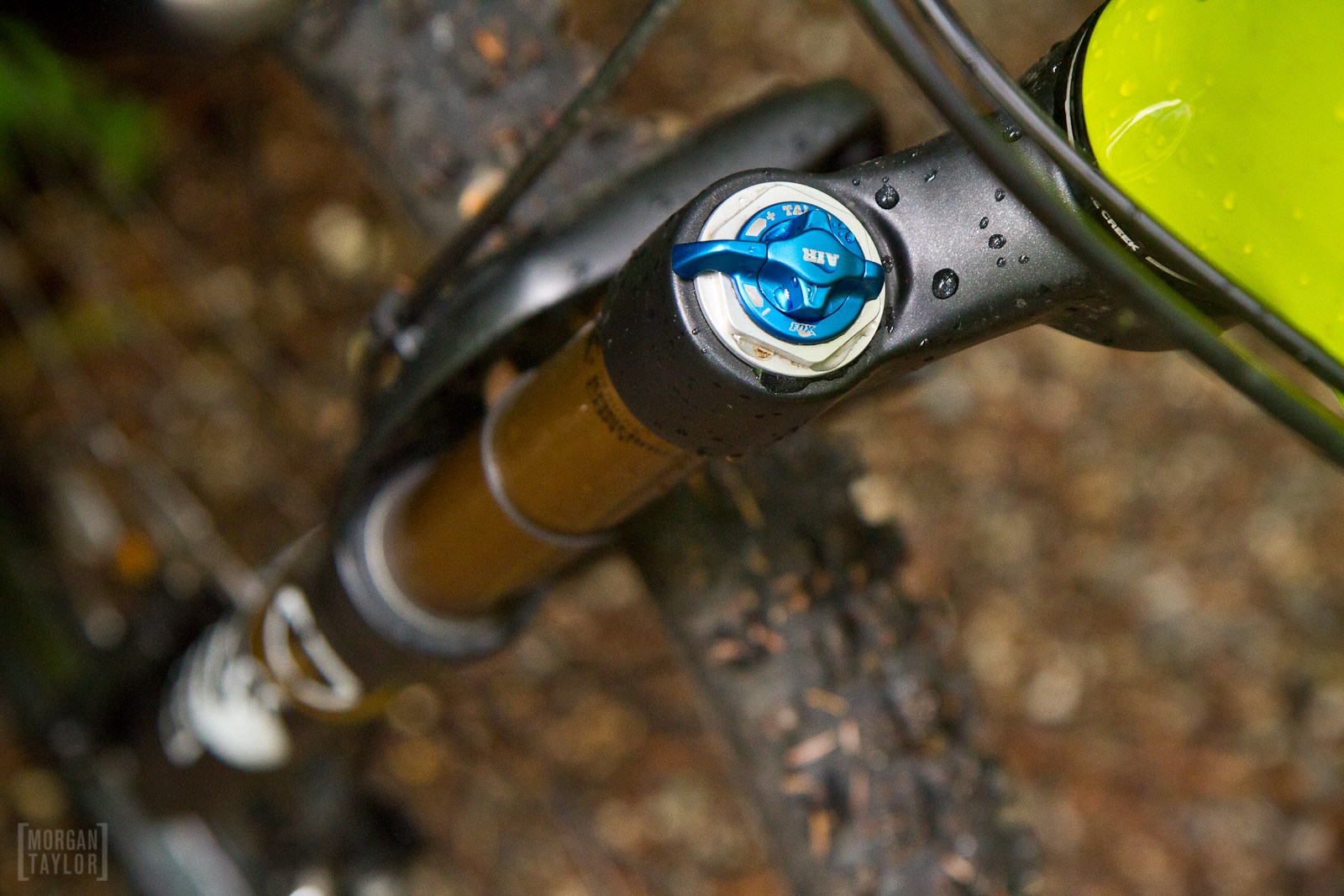 Up front we find the 2014 Fox TALAS-5 with 150mm and 120mm settings. I find the 120 setting too low for practical use, but the fork is internally adjustable to 5mm increments so if you wanted 140 as your dropped setting that is an option. 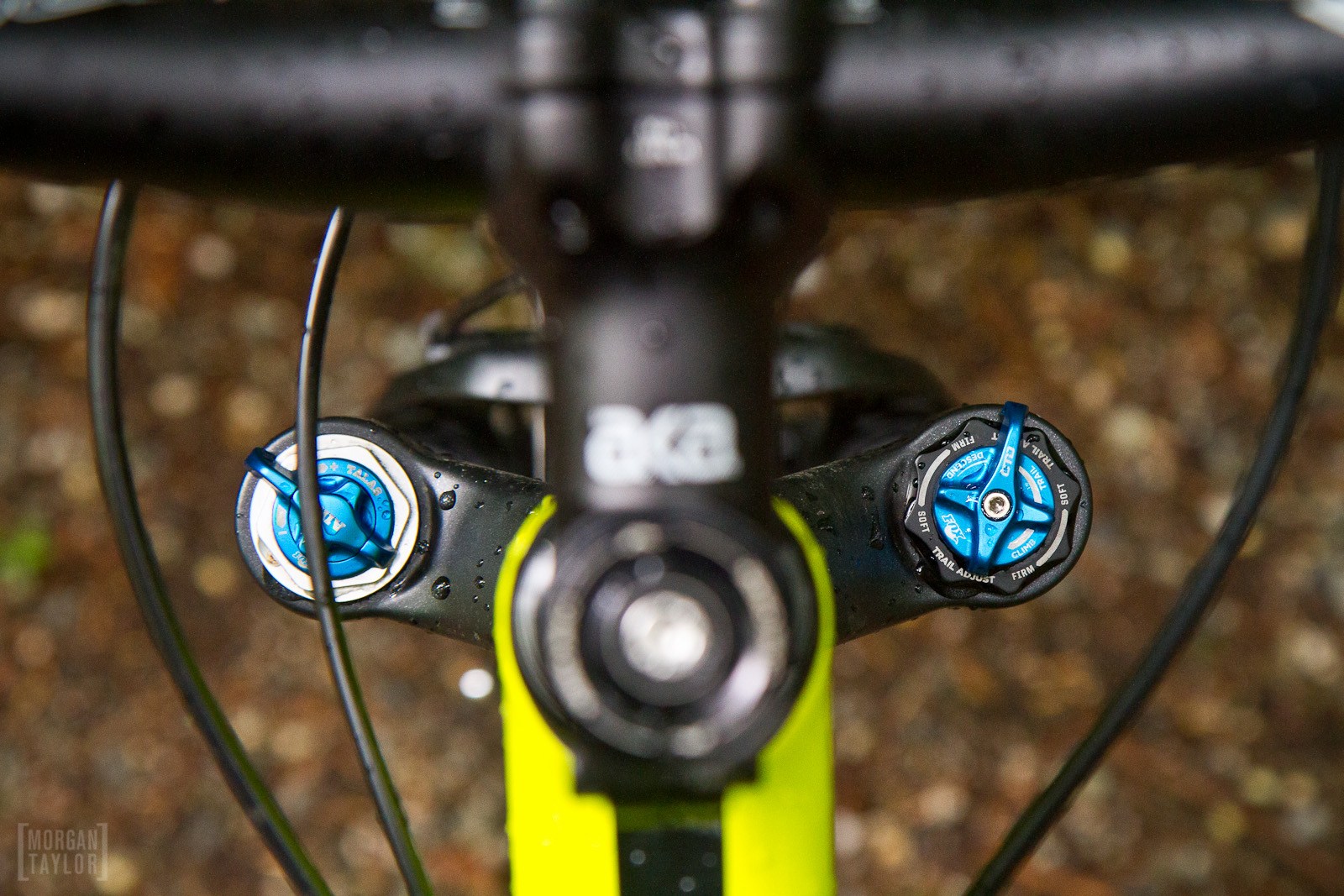 The 2014 FIT CTD dampers are a huge improvement over the early CTD stuff. I’ve been running this fork almost exclusively in the wide open Descend mode and it provides good damping. The air spring ramps quickly, meaning you really have to screw up to get full travel out of the fork – but that’s no doubt better than diving. 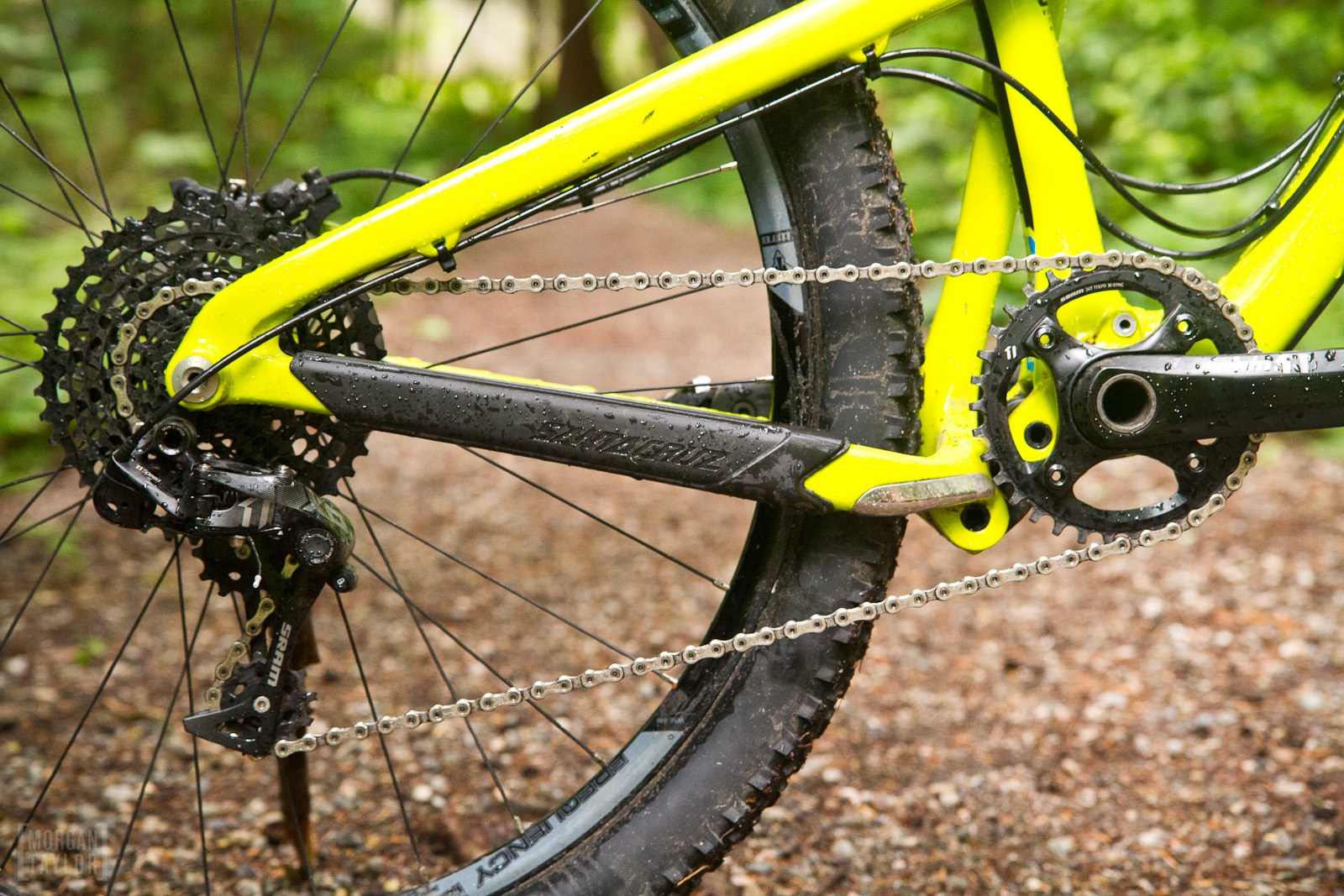 SRAM’s X01 drivetrain has become the workhorse of the 1x world. While it’s not that much cheaper than XX1, it is significantly more black. 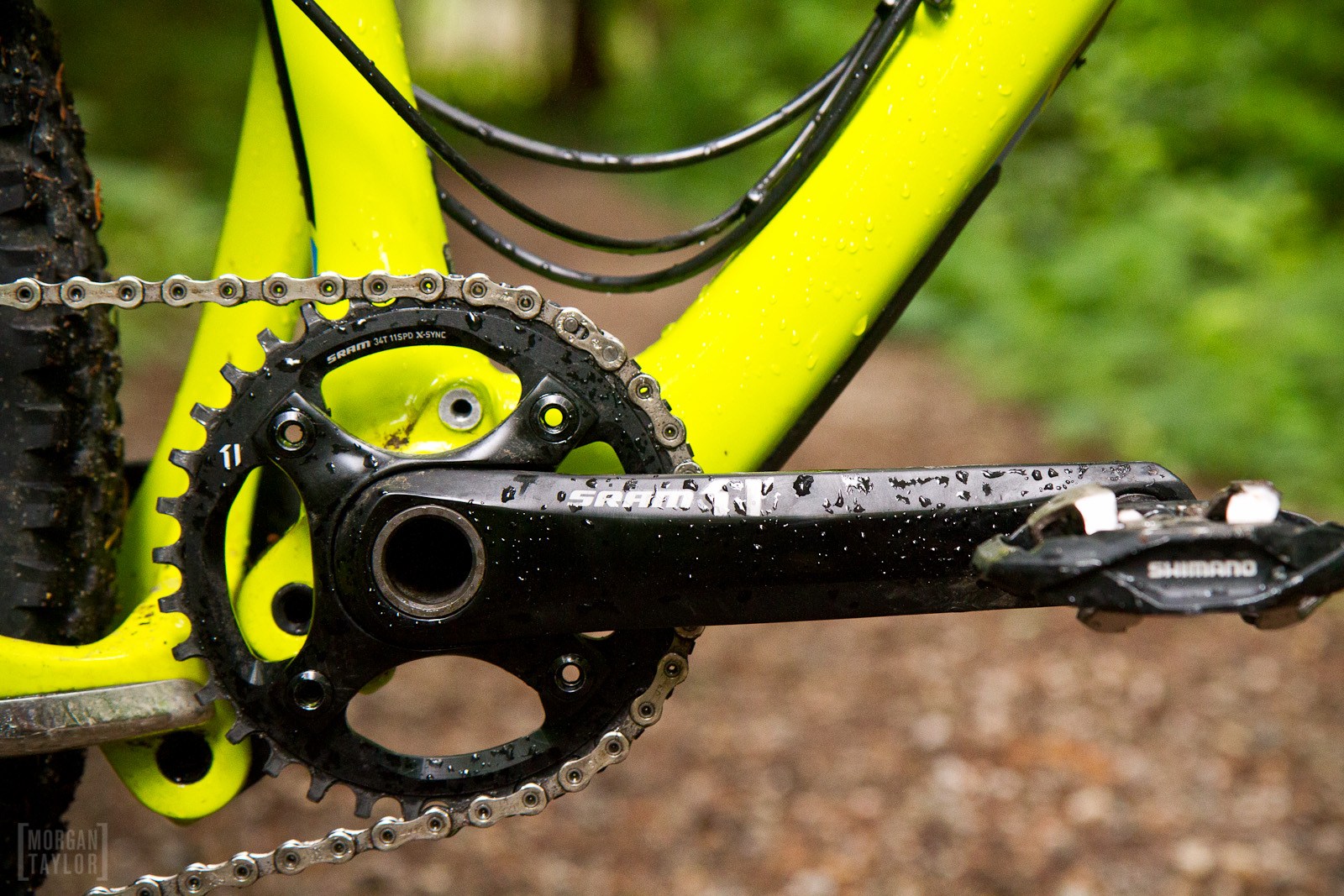 The 34 tooth chainring is a notch more than I’d personally choose for everyday riding, but it does allow a higher top gear which many riders will appreciate. The X1 aluminum crank is fitted with a 94 bcd spider so your replacement rings will be SRAM units – not necessarily a bad thing. 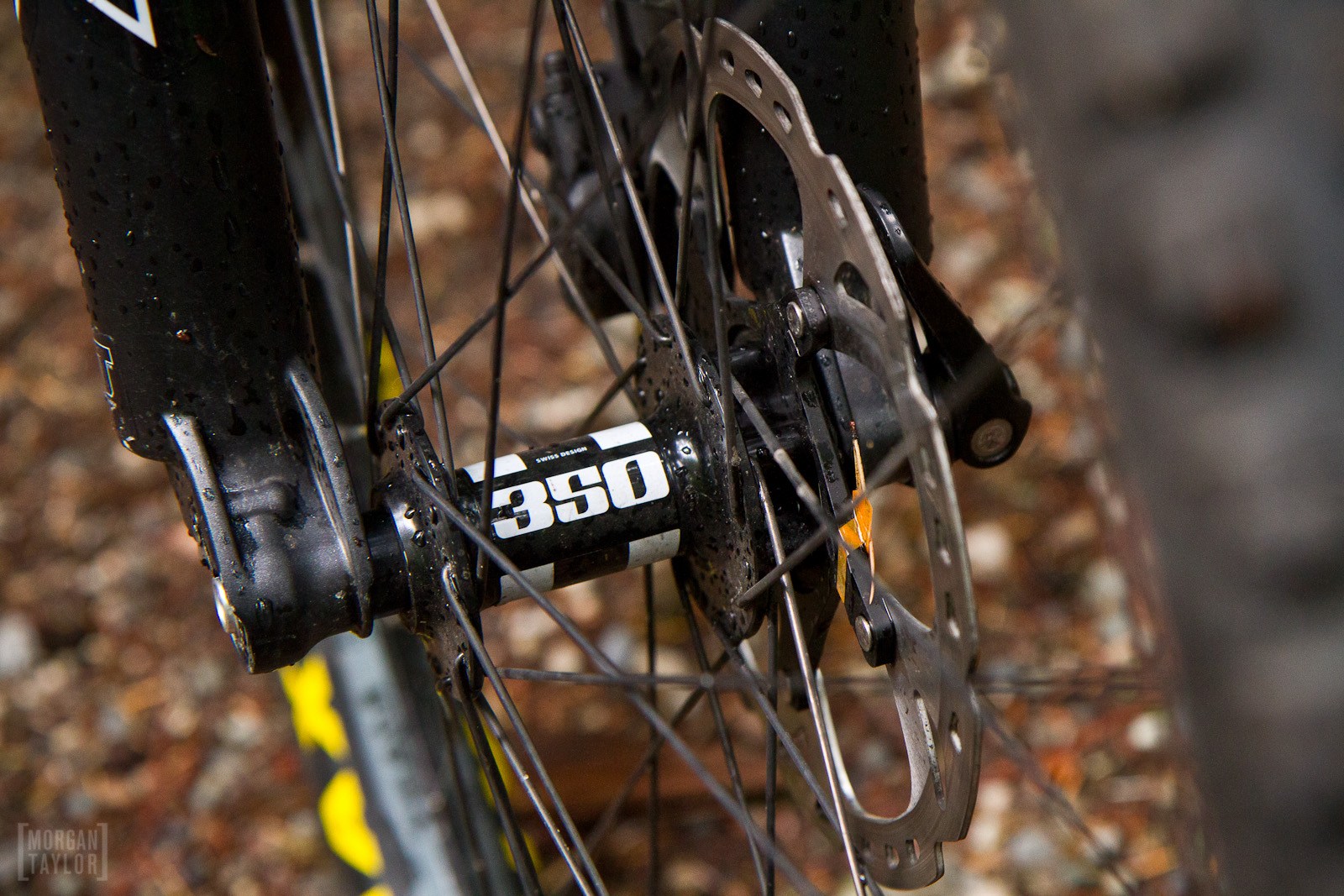 DT’s 350 hubs are laced to WTB i23 rims front and rear. The star ratchet hub is reliable and distinct sounding, and the WTB rims are durable and mount up tubeless without concern of burping. 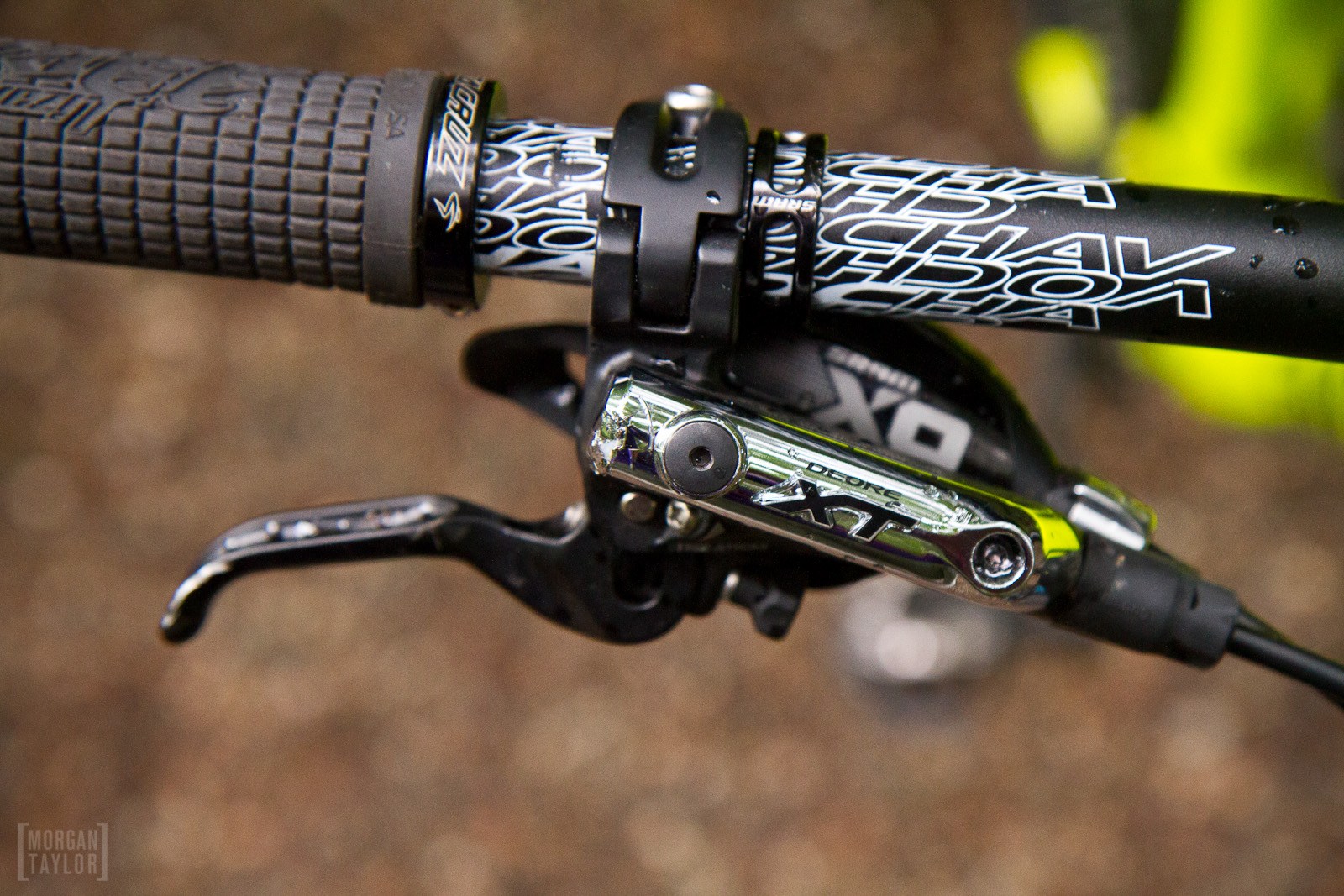 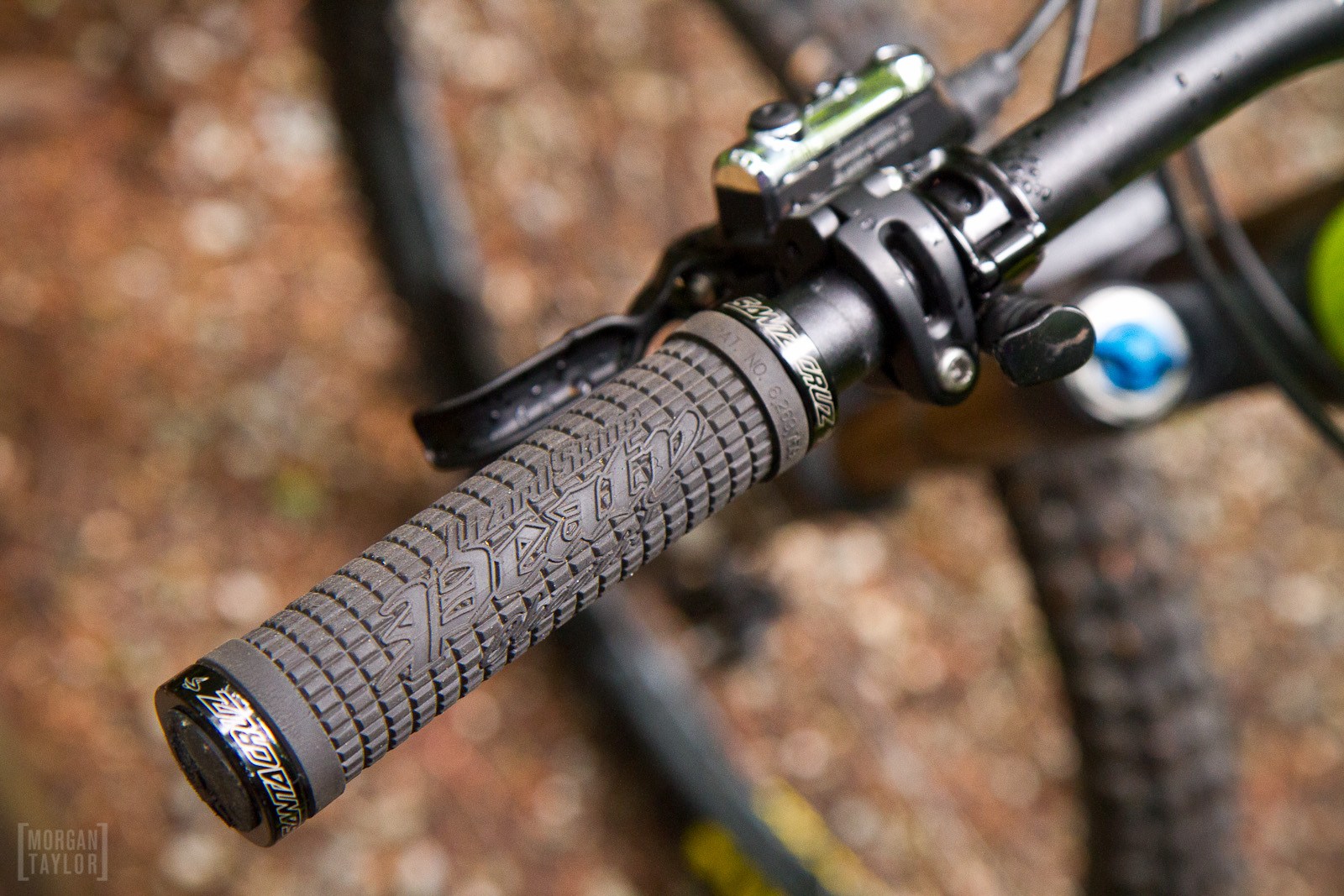 Lizard Skins Peaty grips and an under-bar mounted Reverb lever thanks to the lack of front shifter. 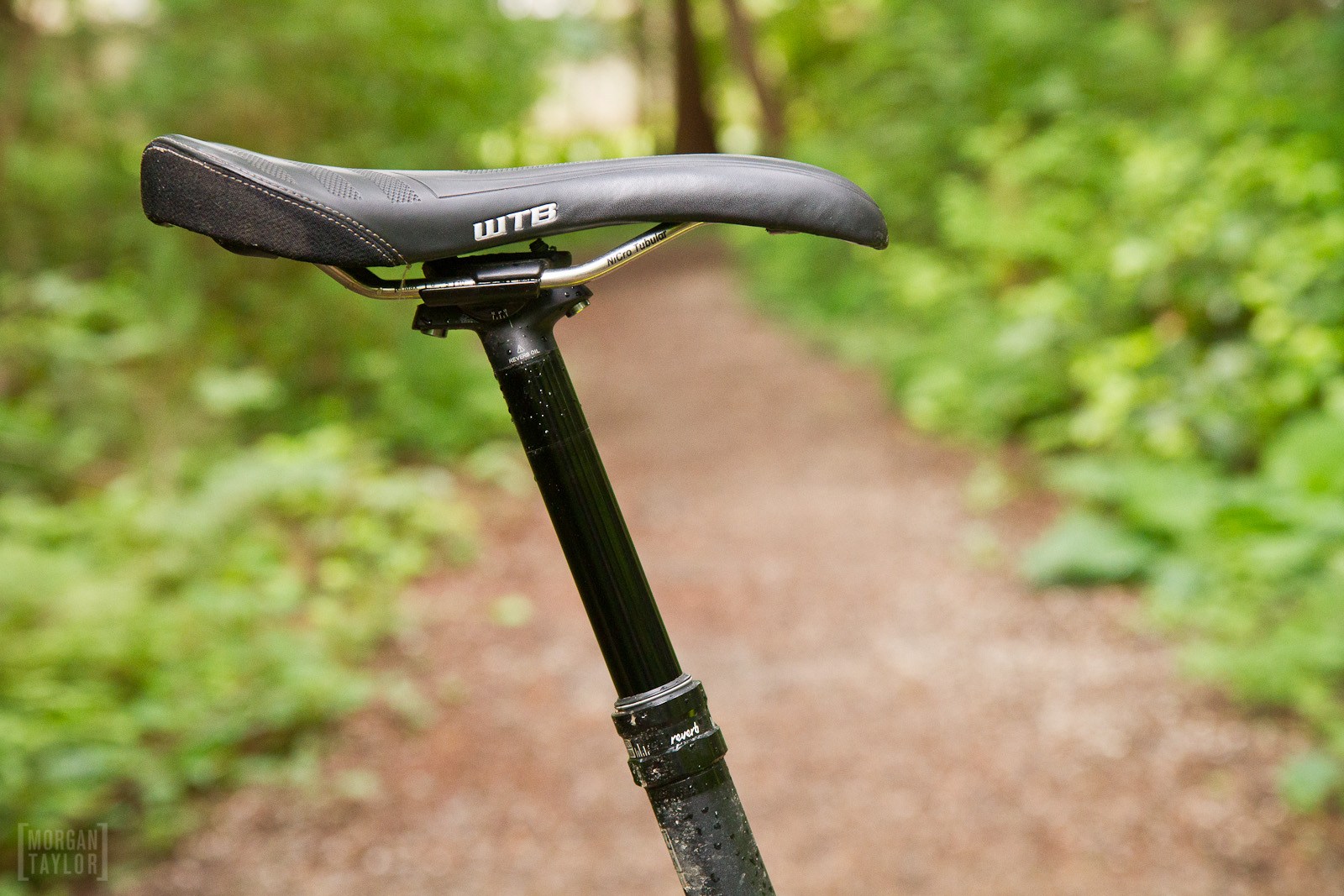 The Bronson uses a 30.9″ seat tube which means a 5″ internally routed Reverb post. The WTB Volt saddle is a solid stock piece, but I must admit my behind doesn’t love it. With my preferred saddle on the Bronson I’ve found I can slide the seat slightly back on the rails – the effective seat tube is plenty steep. 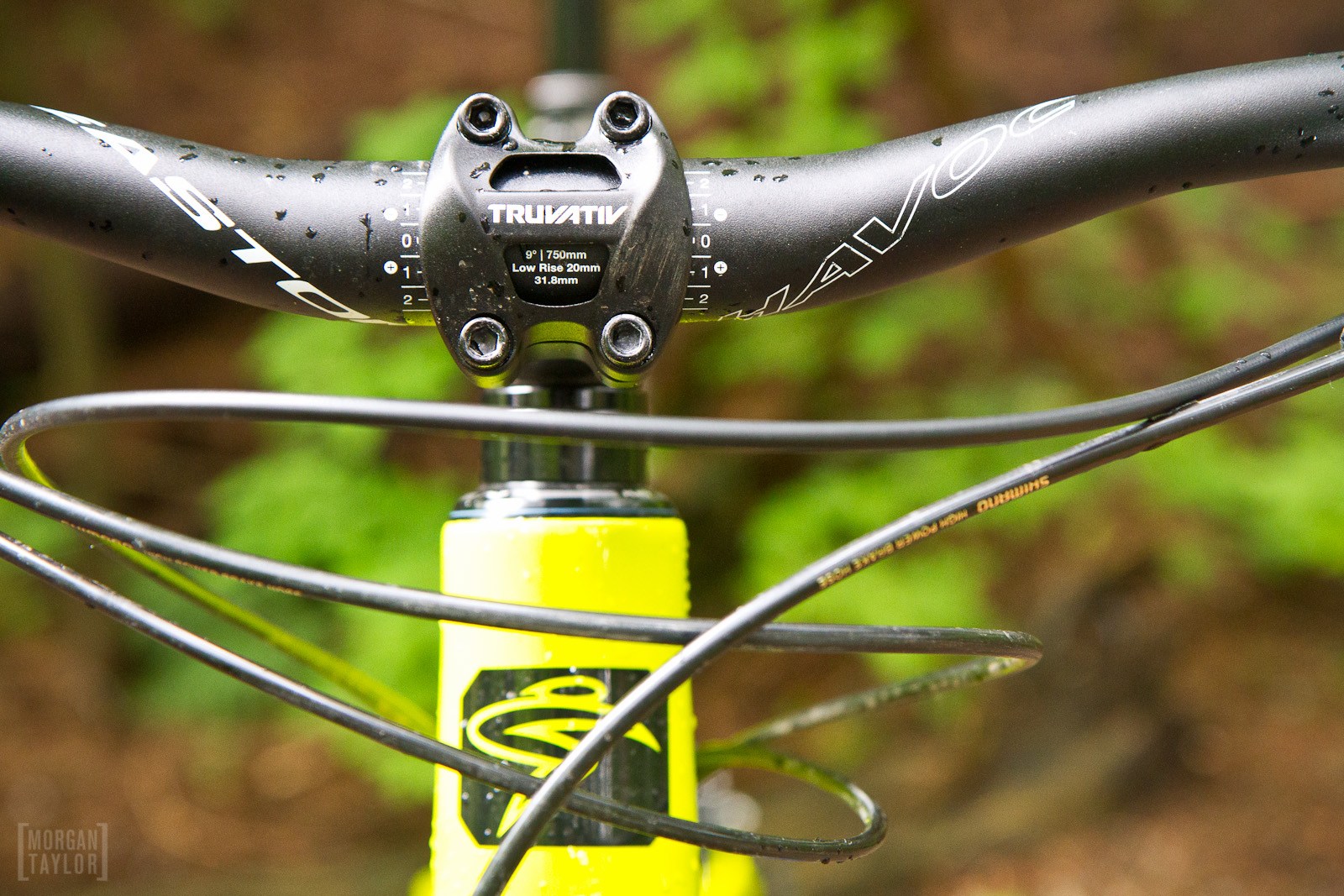 A 70mm Truvativ AKA stem clamps a 750mm Easton Havoc bar with 20mm of rise. The Large Bronson fits on the smaller end of the scale so I went to a 785mm bar with 25mm of rise, and kept the 70 stem. 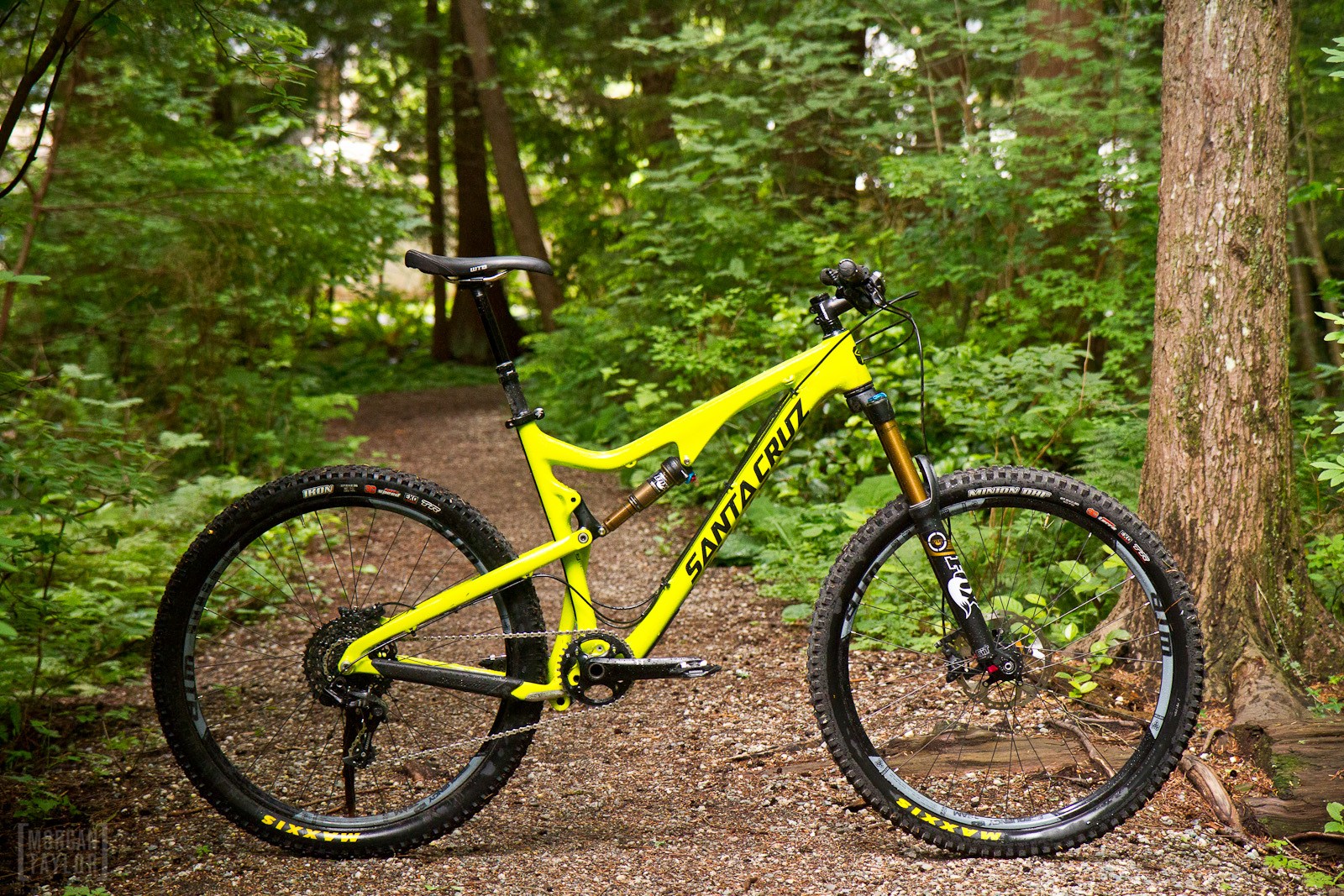 With a 67º head angle and 73º seat angle, the Bronson is well poised for climbing even with the fork at full extension. The 150mm 34 is decent but I can’t help but feel like the bike would suit a Pike or a 36 160 in more technical terrain. 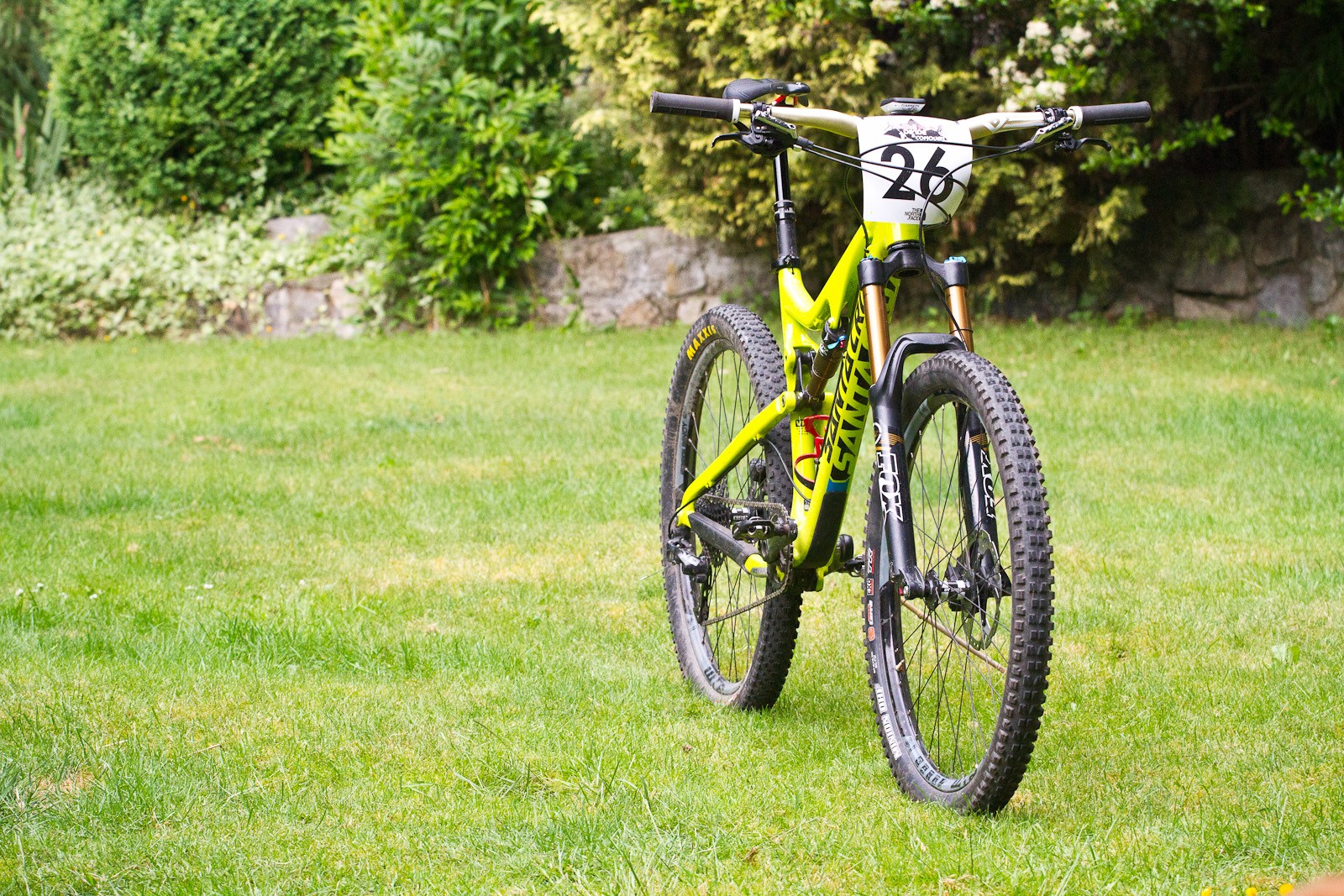 I raced the Bronson in Red Bull’s Divide and Conquer as you see it here. 785×25 bar in terrible clashing gold, 70mm stem, my preferred grips and saddle, added bottle cage, and a DHF and Ikon in place of the stock High Roller 2s.

The X01-AM kit seen here is nearing the top of the heap at $7648 US, while an aluminum Bronson can be had for as little as $3849. Regardless of your preferred material and spec, the Bronson is a sleek machine that still stands out as a fun to ride, pedal-friendly but capable descender. Stay tuned for a detailed platform review…

The rest of the article comes out when ?
I wait…..

I wait with bated breath to hear about VPP's famed mid travel wallow in your follow up report.

I have a Bronson, too, and love it. However, I'm moving to a place with a bit more steep and sketchy terrain. I was thinking about switching to a Nomad, but I really like technical climbing, too. Since you have time on both bikes, I'd be really interested in any comps.

What exactly are the improvements?

How tall are you? Just for reference…thanks!

6′ even with a relatively large fit for my height.

I just bought a Aluminum XL Bronson (great price on a closeout) and
riding around in the parking lot noticed that my hands get tired very
fast, it seems like I'm sliding back on the saddle to relieve upper body
weight on hands / alleviate that tiredness in the hands..

I'm 6'2″, 36 inseam. I ride and raced in cat3 here in Socal Cannondale
60cm road frame for 10 years, then I rented a 61cm Scott road bike in
Hawaii to ride up to Haleakala and realized that 61cm was my perfect
size for a road frame..

Is hands getting tired and sliding backward on a saddle a sign that XL Bronson frame is too small?

So I went to a steep 1/4 mile asphalt hill and to see if I'm gonna slide
off the seat backwards while pedaling and was playing with adjusting
spacers and bar height, and it seemed I found an angle to relieve
"weight on the hands issue", I found position where I can sit relatively
straight on the saddle.

As far as the issue about sitting on the very back of the saddle and
almost sliding off the saddle while pedaling up steep hill in medium
gear (when I had to push the pedal vs just rotating it in granny gear) I
still cannot figure it out.. It feels like I wished the frame top tube
was 1 inch longer so the angle of pushing the pedal would not slide me
backward on the saddle..

There are many more variables at play than just frame size, and you begin to hint at them. How many spacers are under your stem? How long and what angle is said stem? What rise and how wide is your bar?

Often modern bikes have relatively short head tubes, so taller riders need to compensate with more spacers, longer stems, and higher rise bars. Along with this, you have to find a saddle that works for you.

Honestly, I'd probably recommend a fit session with an experienced fitter, and suspension setup with someone who does that side. You got a deal on a bike, spend some cash making it perfect!

It looks like a R/H Specialized bottle cage, i have a left hand version and it locks your bottles in!!!

Totally off topic, what bottle cage is that?

Specialized Zee Cage I, superseded this year by the Zee Cage II which can have a multi tool bolted to the bottom of it.