As with all things that are new; people, innovations, locations, objects – an introduction is in order. For the next half year or so, Kaz Yamamura and I will be regularly riding “intern bikes.” One objective is to review these bikes, but they’ll also help us test other components, tell stories, and maybe find some adventure. Here’s the initial look component of our usual two-part review, and be sure to check out the hashtag #InternBike on Instagram to see where our bikes take us…

The change started slowly at first. Like creeping ivy, tighter cycling clothing began to pop up unexpectedly in my wardrobe. Bib shorts began to outnumber dress shirts in my closet. Words like “electrolytes” and “hill repeats” infiltrated my vocabulary. I started training. Not secret training mind you, but actual training. Ladies and gentlemen, it finally happened; I’ve actually come to enjoy climbing on a bike. Madness.

It wasn’t always this way. Sporting baggy shorts and an ill-fitting t-shirt, I would be the dragging anchor on group rides, gasping and wheezing while mashing uphill in granny gear with my lunch threatening to make an encore appearance. I loathed going up, but endured it as a necessary evil in order to reap the rewards of riding back down. But like an 80s movie montage about a plucky underdog, I slowly began to get better, until I hit a point where I was no longer the last one up the hill. Finally, I was ready to meet my partner in crime.

My first encounter with Rocky Mountain’s 2014 Thunderbolt was back in April when fellow NSMB staffer Morgan Taylor provided me with the Thunderbolt 750 for my madcap goal to climb 10 thousand feet in a single week. I rather enjoyed my time with it, and was delighted when I learned I would be receiving the up spec 770 model as my “intern bike.” I may have even done a little happy dance.

After a dusty introductory ride in Whistler I’ve taken the Thunderbolt all over the Shore, and it will be accompanying me on some sizeable trips in the near future. Included with the photos below are my initial impressions of the bike, as well as some plans for the future. 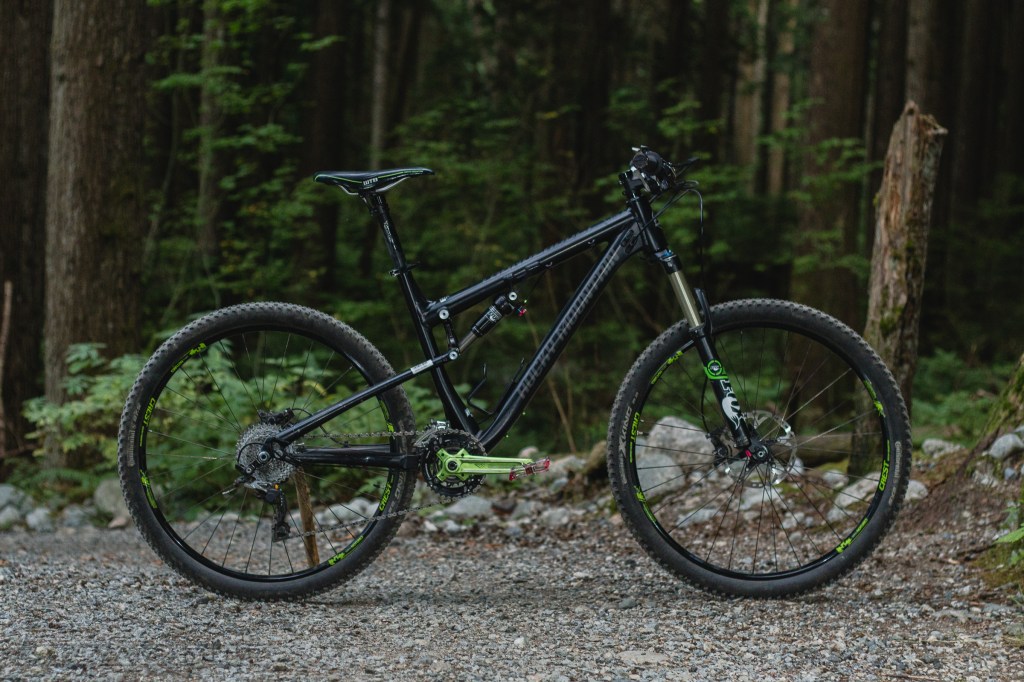 The 2014 Rocky Mountain Thunderbolt. Stealthy, fast, and far too much fun to be legal. Pitched by Rocky as an “Aggressive XC” bike, I’ve already found it to be capable of so much more. 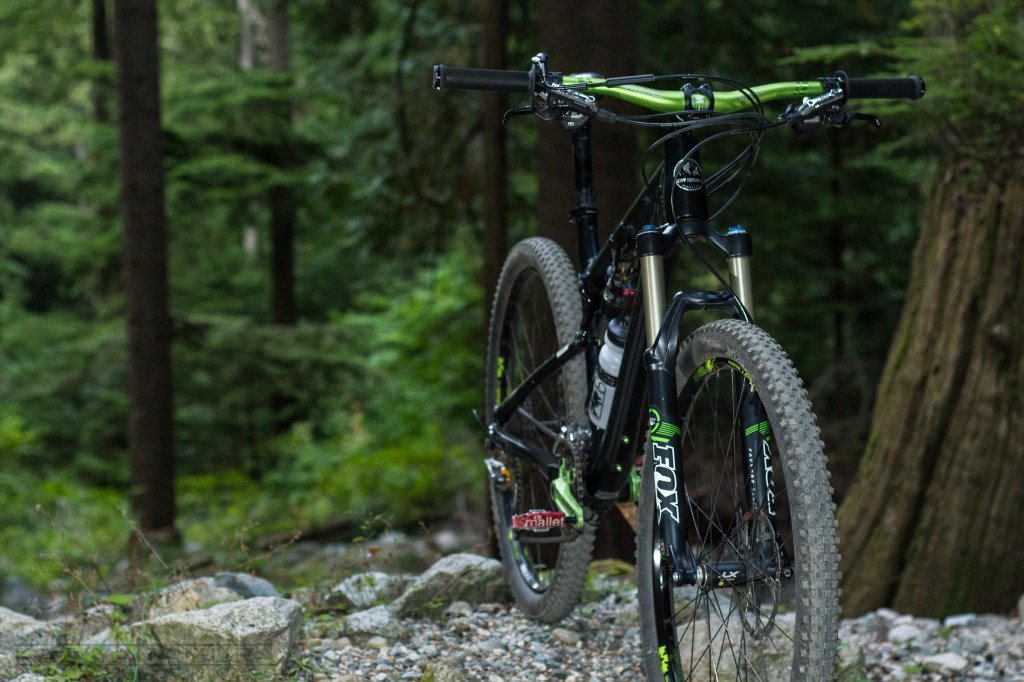 Rocky did a bang-up job co-ordinating the green components and accents on this bike. So of course I had to go and add red pedals to the mix. Sorry designer folks… 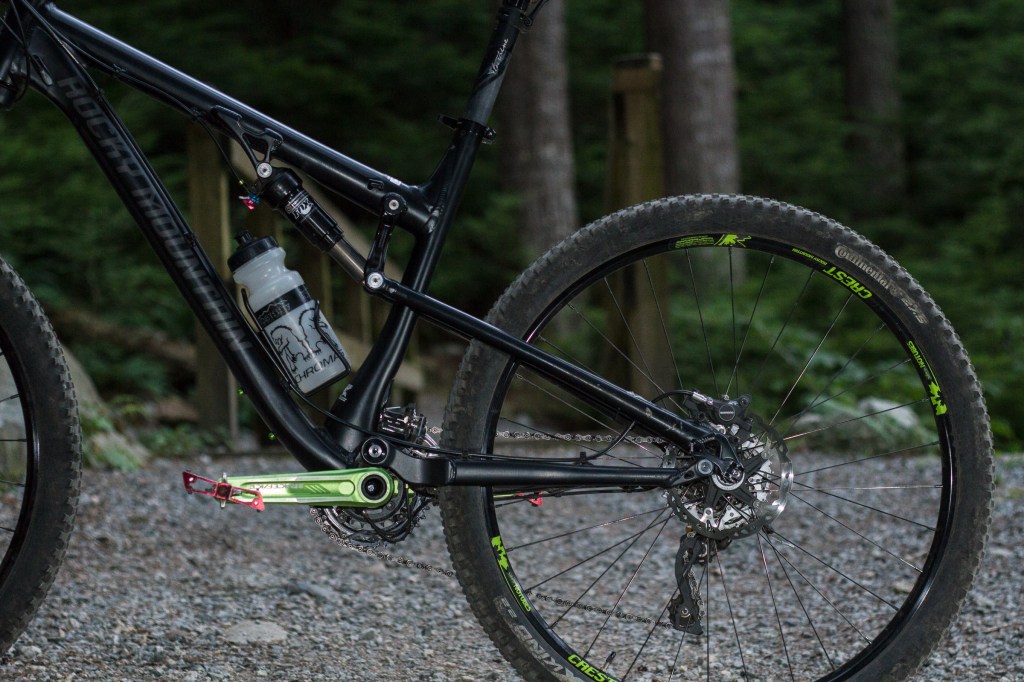 Despite the bike having “only” 120mm of suspension, I’ve yet to physically bottom the rear shock. The rate curve on the bike gives me enough confidence to ride stuff that would make most XC bikes queasy. 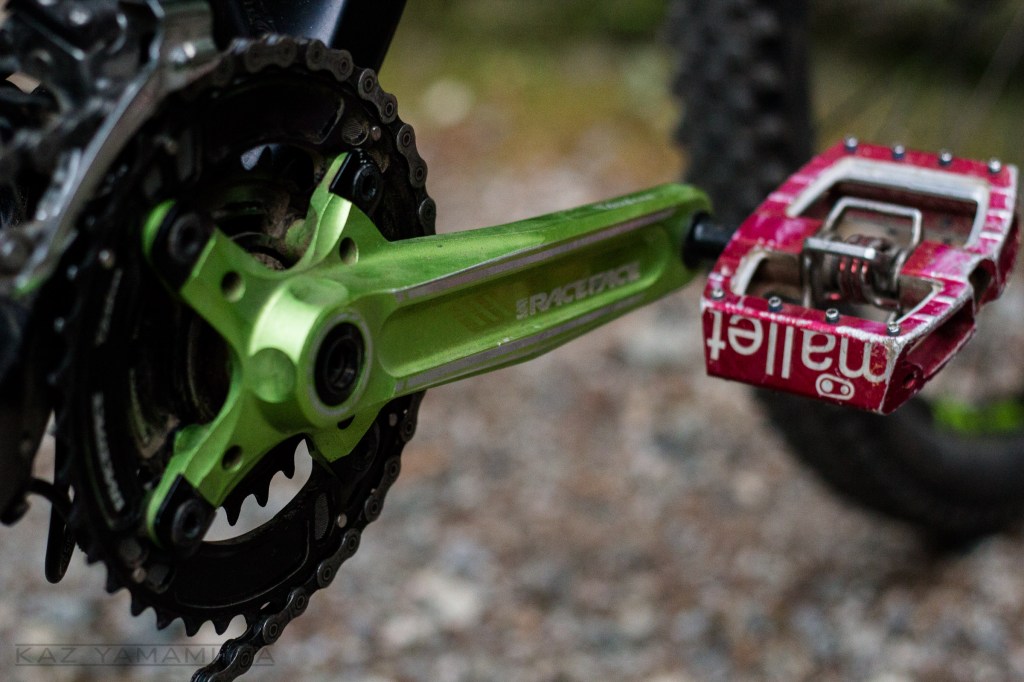 I’ve received several compliments about my cranks while riding along. Currently rocking the 2×10 setup, but that may change over the winter. Also of note, I’ve been riding the Crank Brothers DH Mallets for more than two months now, and they’re still functioning perfectly. With that kind of luck, I should probably go buy a lottery ticket. 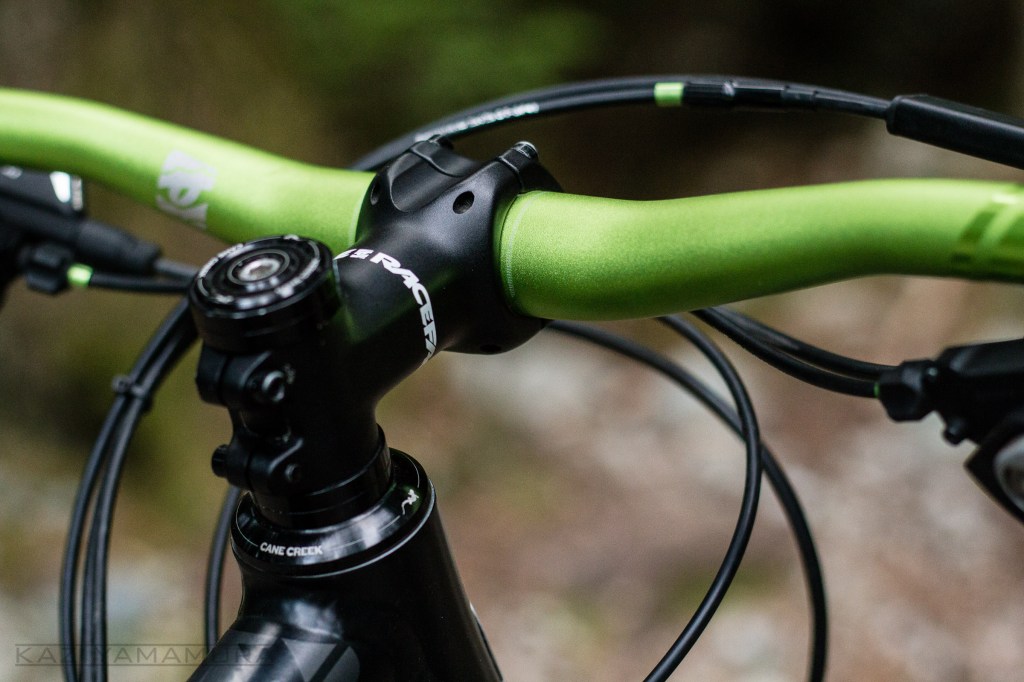 More Race Face bits up front in the cockpit. While the longer stem and narrower bars make sense in an XC application, I’m in the process of pulling a “Jon Harris,” and swapping to shorter and wider respectively. 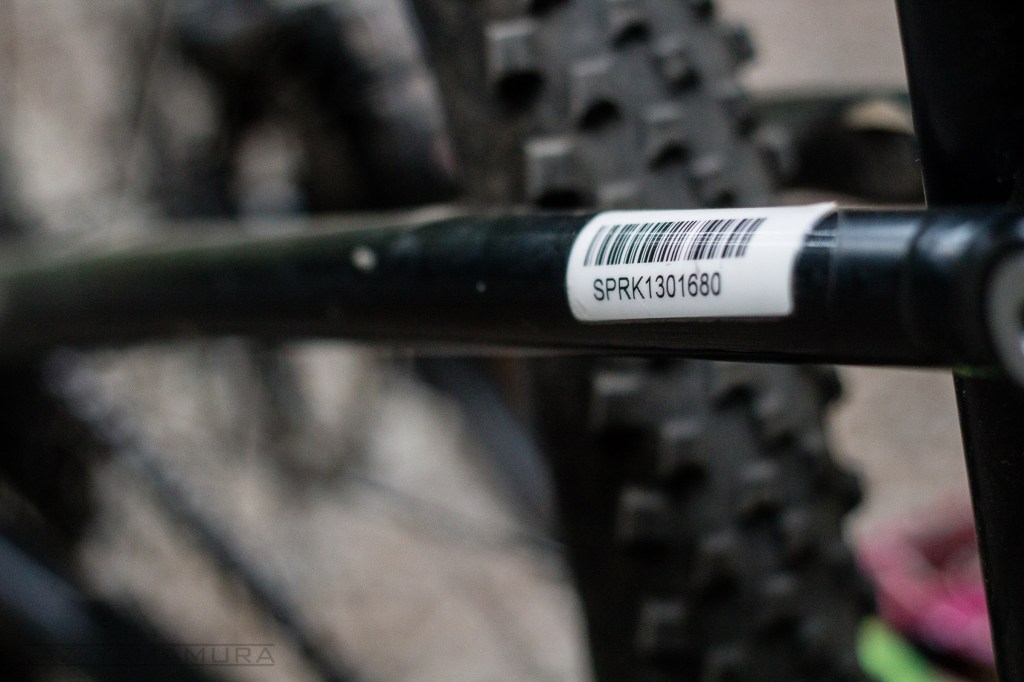 This particular frame was part of the Rocky Mountain test fleet. I hope it wasn’t expecting an easy retirement… 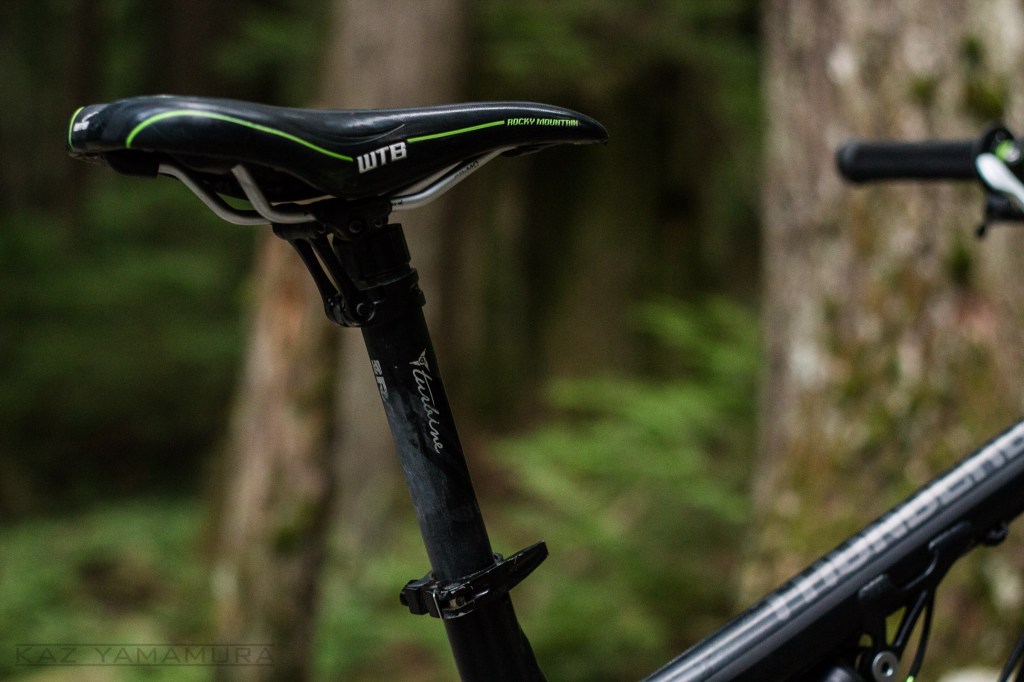 Colour-matched WTB saddle and a Race Face Turbine seat post. Having ridden with a dropper post previously, I’m really missing it on this bike. Thankfully, it’s routed appropriately and I’ll be installing one as soon as possible. 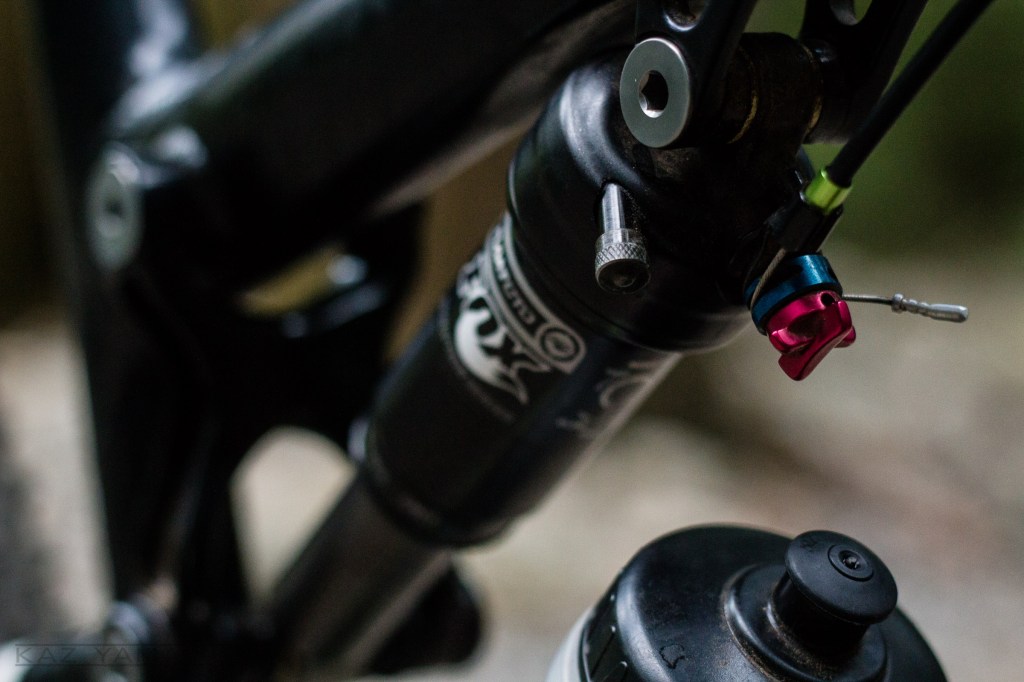 The Fox RP23 shock is custom-valved for this particular bike, and sports the CTD remote option. While I do like the option of locking both my shock and fork from my bars, it has resulted in a bit of a rat’s nest up front. 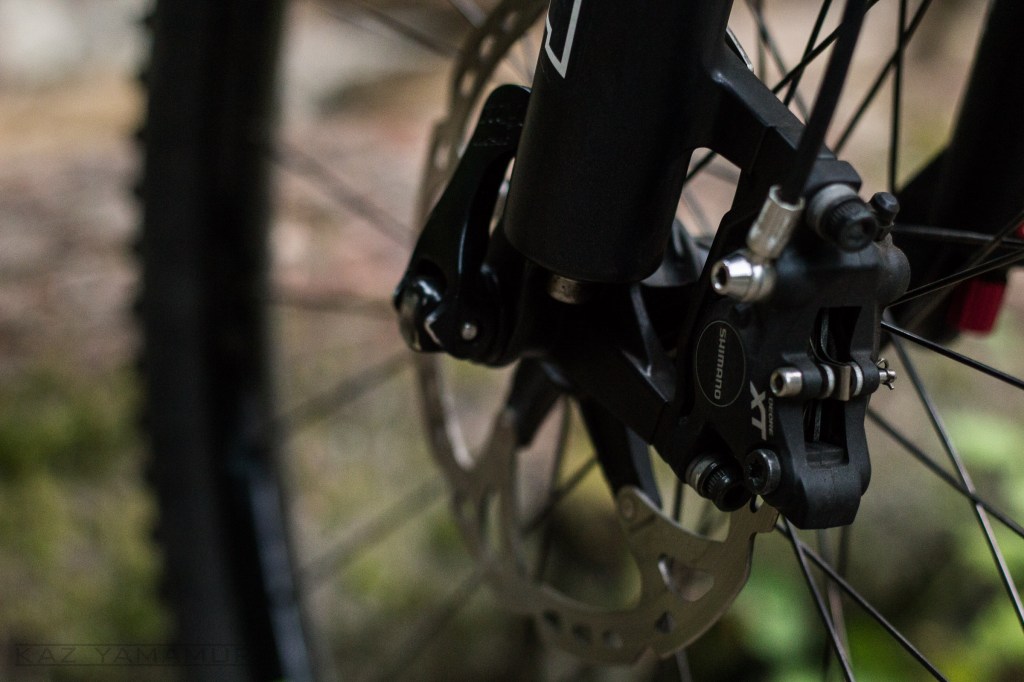 Shimano XT brakes help keep things on track when the going gets rowdy. I’m a big fan of Shimano’s lever ergonomics, and have never been lacking for feel or power on a ride. 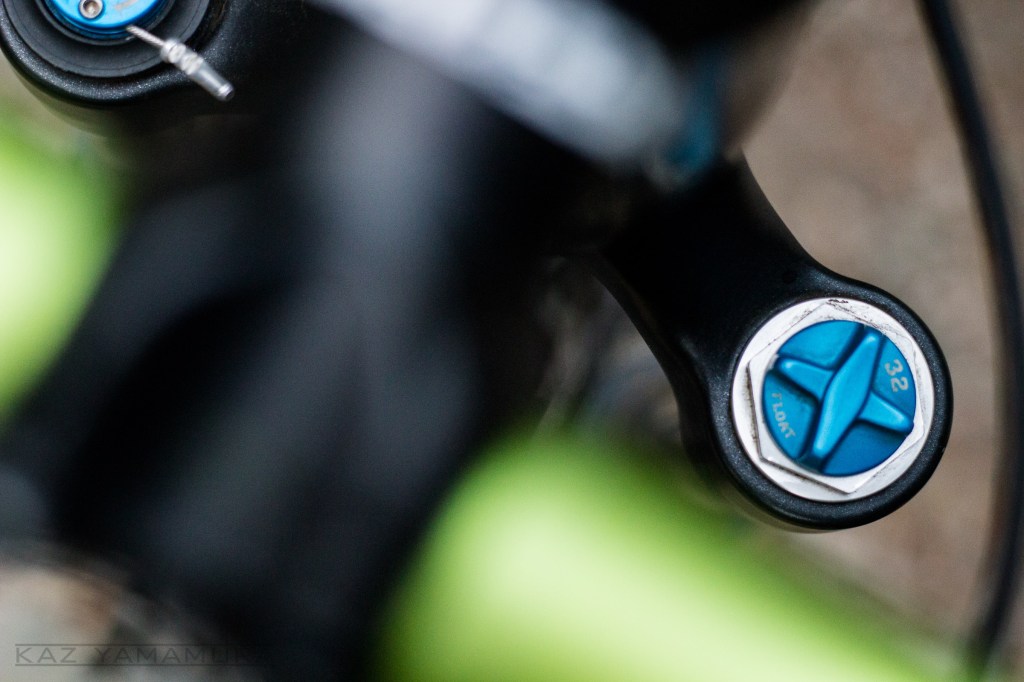 Up front, a Fox 32 Float takes care of suspension duties. Equipped with the FIT damper, and a remote CTD selector, it’s proven surprisingly stiff and capable of dealing with the punishment I’ve been doling out. 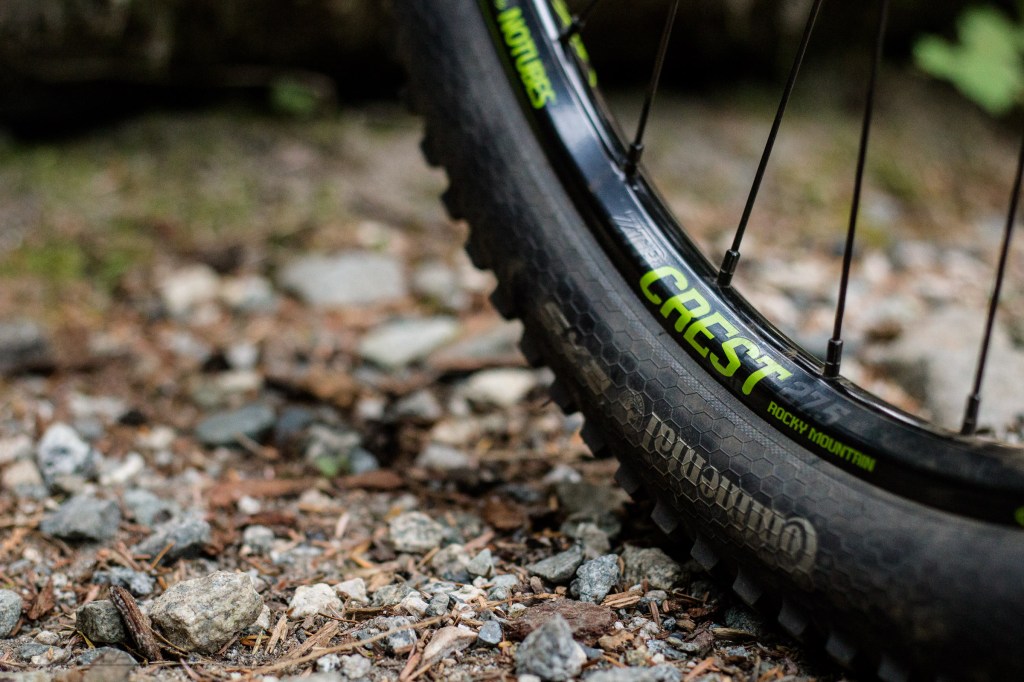 Stan’s Crest wheels may sit in the shadow of their beefier siblings but after some particularly awkward dances through rock gardens and more than a few fumbled lines, they remain as true as the day I got them. Sadly, the Continental X-King tires haven’t proven as capable in the same terrain. Ride characteristics have run the gamut from “Hey, this is pretty drifty” to “So scary I think I’ve soiled myself.” 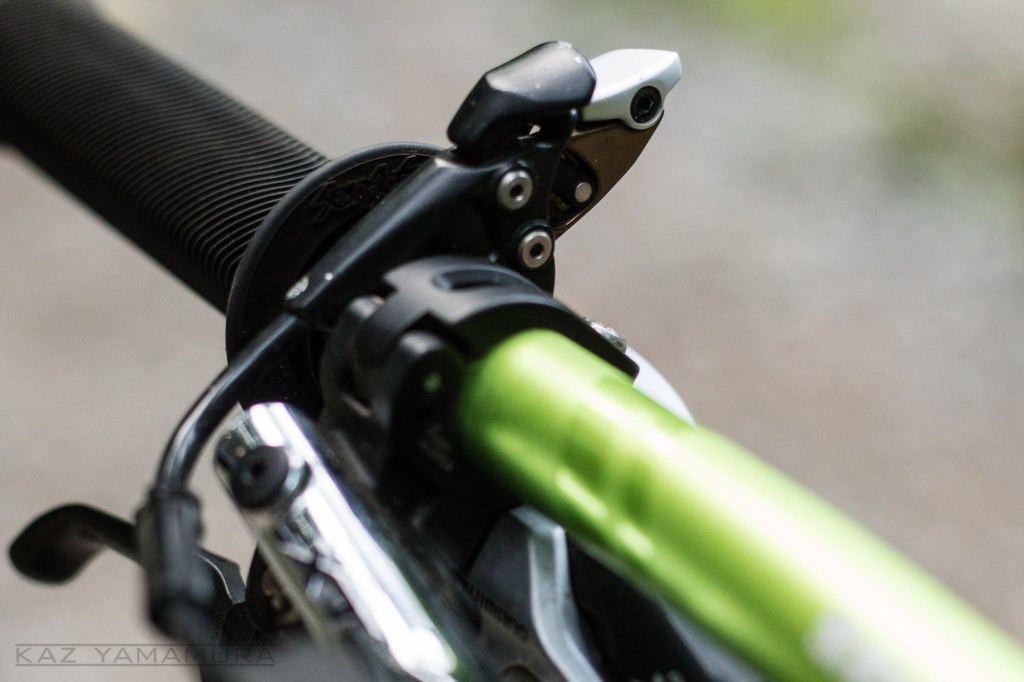 The other half of the CTD remote equation. This iteration of the remote takes up way less space than previous versions, but still creates a ton of cable clutter up front. I’m willing to tolerate the clutter for the joy of locking out the suspension and stomping up a climb though. 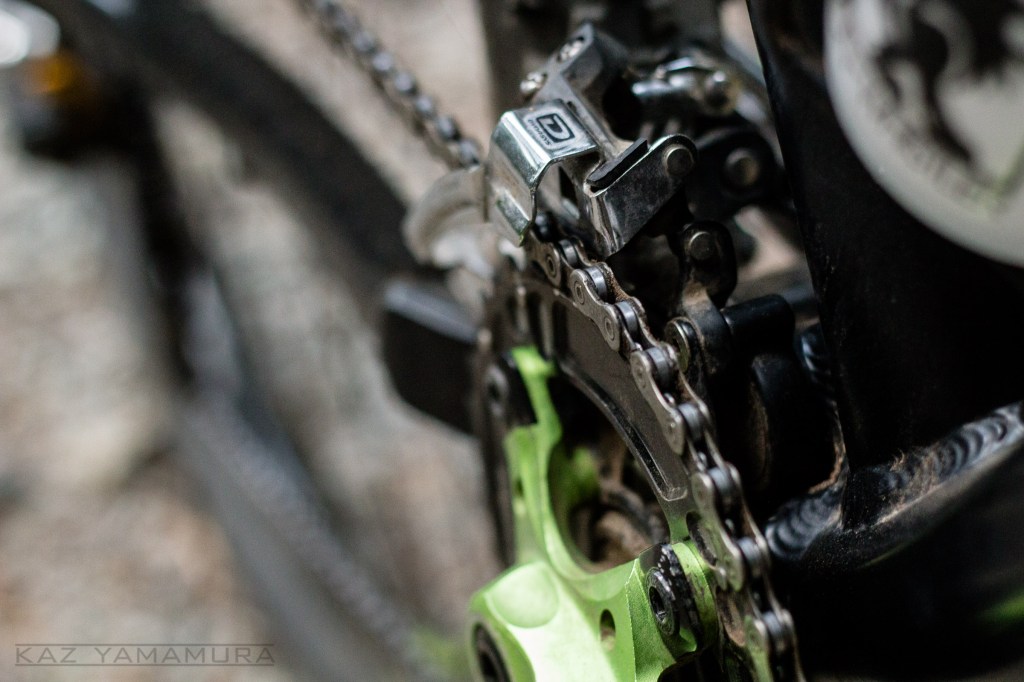 More Shimano shifting bits. Even though there’s no chain guide, I’ve yet to have it drop on me. 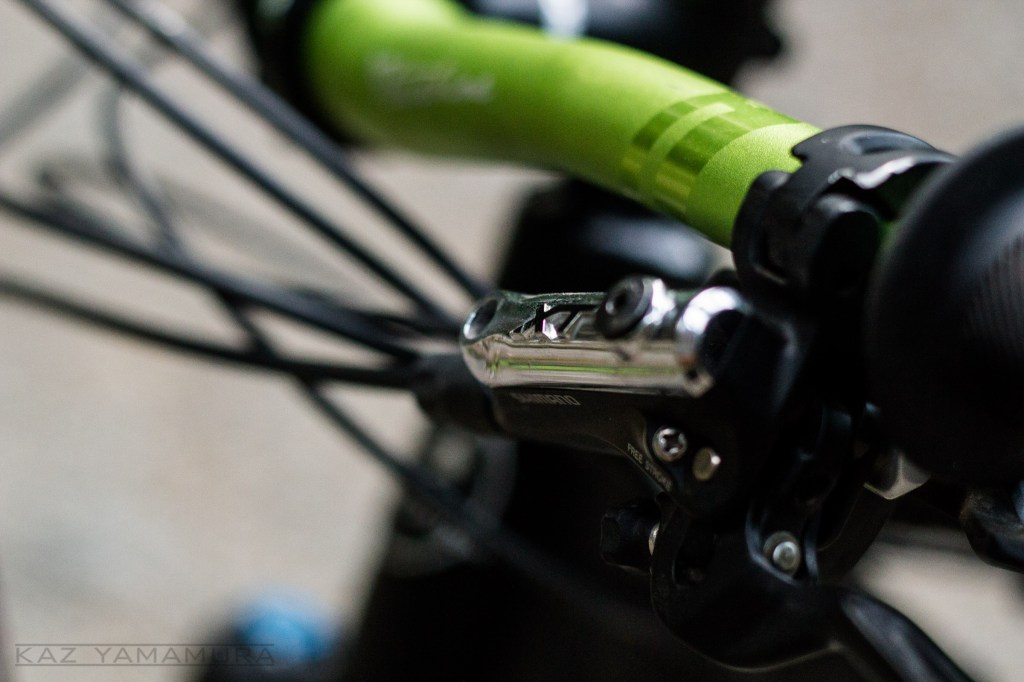 Another nice touch is the Shimano I-Spec mounts for the XT brakes and shifters. I’m a fan of keeping stuff grouped as closely as possible. 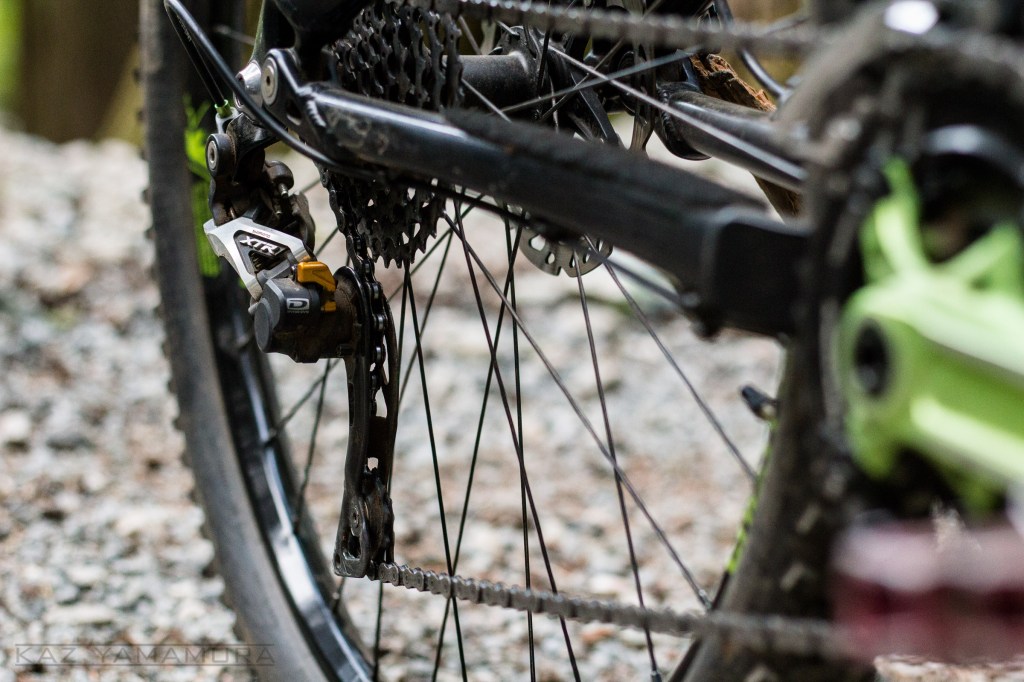 An XTR clutch rear derailleur shuffles the gears around. It’s truly amazing how much difference the clutch makes, as the lack of noise matches the stealthy paint job. Plus, super-crisp shifting. 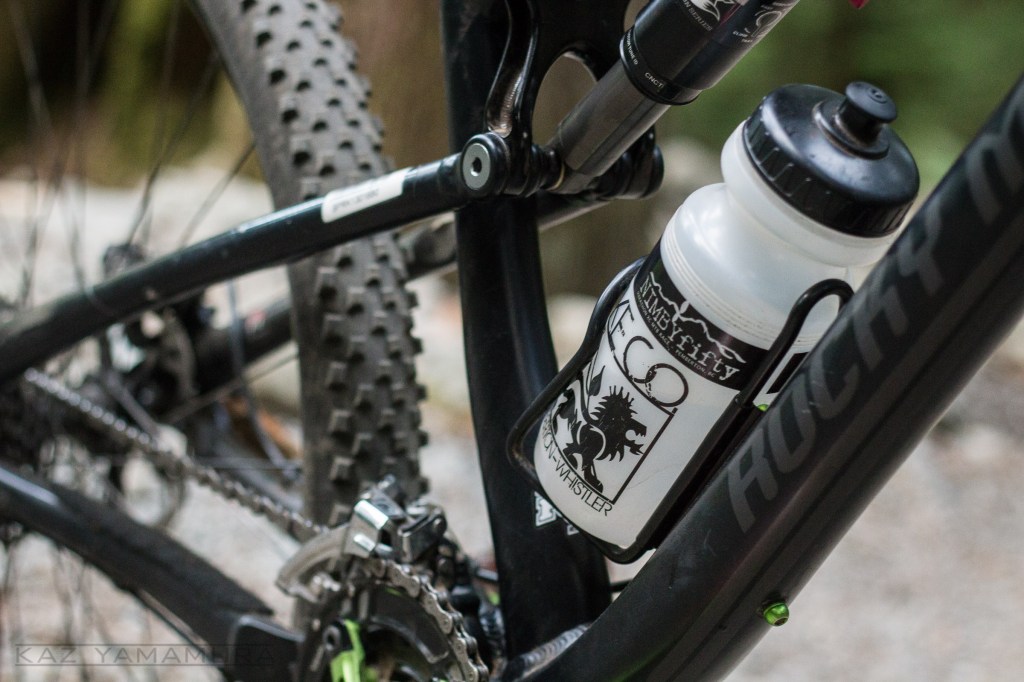 It wouldn’t be an XC bike without a water bottle. Perhaps this is a prelude of things to come? The mystery deepens…

A Nimby Fifty water bottle, and a lightweight bike. What sort of shenanigans is Matt planning to get into here?

Comments like, despite not having a chain guide, and still not dropping chains, and 32 proving stiff, makes me feel its been ridden by a bit of a wimp. 32 aren't stiff, by any stretch of the imagination, and anyone peddling properly over rough stuff is guna drop chains, and where is the dropper?!

I just read a lot of reviews and think, just, tell the truth.

Matt may not be our most experienced rider but he's getting faster and better all the time. On top of that the best riders aren't always the best testers. The way fast learners are sometimes the worst teachers. But I assure you he would have told you if he dropped the chain or, if for his use thus far, the fork was noodley.

Props on the Sensus grips! Gotta be the most comfy grips I have ever ridden on.

1. Don't sell those pedals short; I put a lot of miles on them before passing them on to you and despite the smooth, well-adjusted bearings they've never even been opened up.

2. I like the idea of a remote for the shock but I'm wary of having that control coupled with a fork lockout as that's a function I rarely want to use even when it's within arm's reach. Time will tell, but I feel like I'd be taking the cable off the fork.

It doesn't work that way. Best hack is to use a 20mm long piece of cable and lock the fork into Trail mode, and simplify the routing to the rear shock by way of removing the doubler.