Rocky Mountain launched the new Thunderbolt a few weeks back. It’s fair to assume the 120mm platform lands somewhere between XC and Trail – but I wanted to see exactly where on that trajectory the new bike ended up, as the parts spec doesn’t necessarily give that away. Given the chance to hop on the top-spec Thunderbolt 770 at Bootleg Canyon, I set out to answer that question. 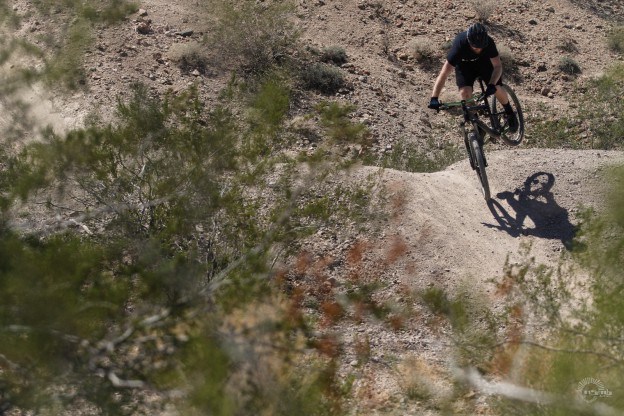 Whipping the Thunderbolt 770 for the sake of good journalism. Photo Matt Dennison.

With a smattering of moss green Race Face on a black frame with grey decals, the 770 has a nice aesthetic that doesn’t jump out at you too much. At a press launch earlier this year a fellow journalist told me that he could always tell a rider from BC because they’ll bring their own brightly coloured bar to put on the test bikes; I guess this Thunderbolt means everyone gets to look like they’re from BC. One point for Trail flavour? 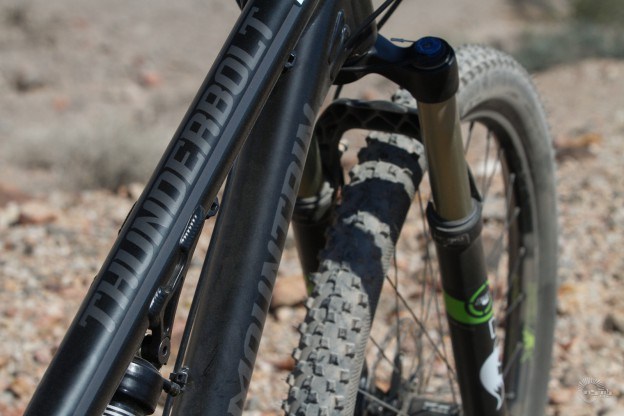 Understated graphics with tasteful colour matching is a good thing in the Rocky line as of late. 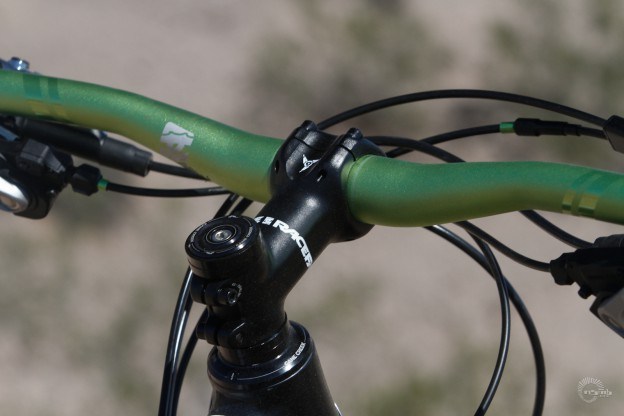 Like it or not, you get a piece of BC steez with the Thunderbolt 770.

Situated between the Element and the Altitude in terms of travel numbers, bikes that are both good pedalers, I did expect the Thunderbolt to do that well – and there were no surprises here. There is a spec update in that the remote rear lockout seen on the Altitude and Instinct now goes to the front as well, and sees an updated lever which may appease some grumbles about the old lever’s aesthetics. The platform on the shock stiffens up quicker than that of the fork, going almost full lock. This is an aspect the XC racer or a rider who spends a lot of time on asphalt will appreciate, but I would personally choose a Trail Adjust fork over the remote lockout. 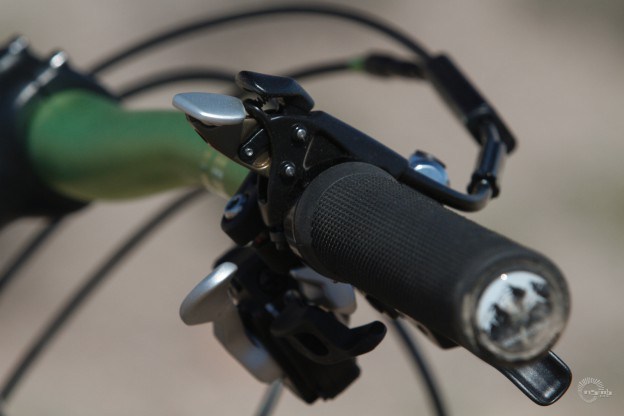 The new Fox CTD remote lockout doesn’t stand out quite as much as its predecessor, but this was at the cost of ergonomics and the fit and finish is not as nice either. 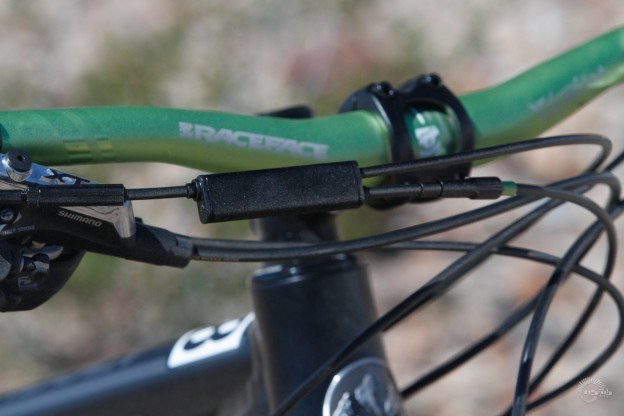 The cable splitter box to allow one lever to control both dampers.

As for the on-trail characteristics of the bike itself, I would call the Thunderbolt more of an XC bike than a Trail bike, even in the open position. The handling is quick and the rear end feels firm both climbing and descending. Going uphill I had no complaints about the ride and what felt like a short reach on this pre-production sample will be assuaged by 10mm more top tube on the production bikes bringing that number to 615mm on the Large frame. The downhill characteristics are expectedly firmer than the 150mm Altitude but the 68.5 head angle adds confidence over what an Element would produce. The Thunderbolt is playful and nimble, more at home on smooth than extremely rough terrain, but definitely quite capable. 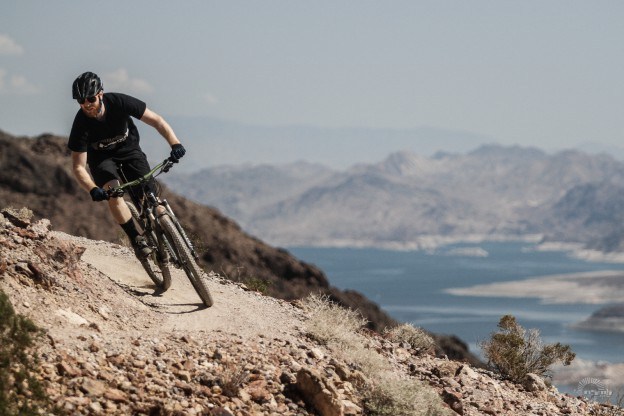 The Thunderbolt was a great choice for the XC loops above Lake Mead. I actually had fun riding at Bootleg Canyon! Photo Matt Dennison. 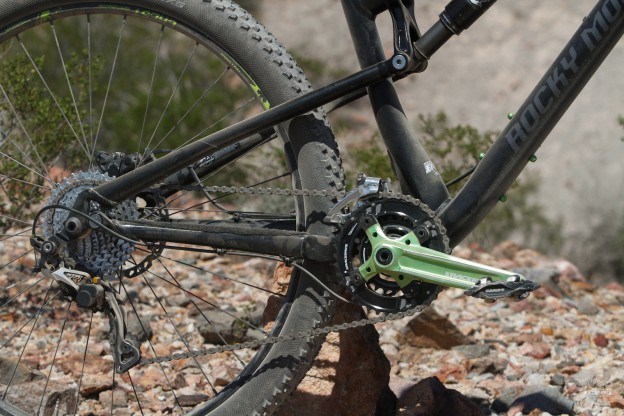 The Thunderbolt’s SmoothLink rear end ensures the bike is a well-behaved pedaler just like its brethren. 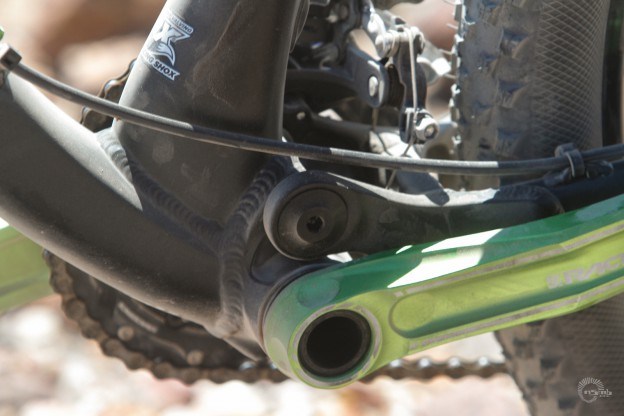 The main pivot is the only place you’ll fine bearings in the suspension.

In the Altitude review linked above I expressed pleasure in seeing a 34 spec’d on the 150mm bike for stiffness and confidence, but here at 120mm the 32 is sufficient. I’ve yet to spend enough time on the 2014 Fox dampers to comment on how that plays out with the remote lockout in the long term, but the Descend mode on the fork is definitely usable which could not be said for the 2013 unit.

So, the full Fox CTD system is now operable from the bars, which I am personally undecided about. While I really enjoy having a shock lockout on the bar – in fact I don’t really ever flip the lever on shocks except on these bikes – I don’t feel the need to change fork settings once I find the damper setting I like and am sad to see the “Trail Adjust” option on the fork not compatible with the remote lockout top cap. 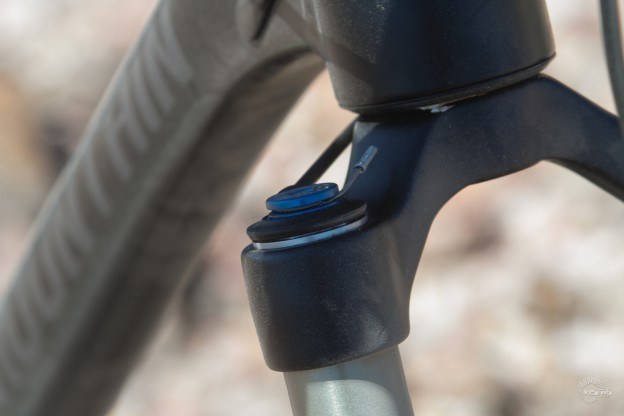 The Fox CTD remote fork does not feature the Trail Adjust damper – maybe less of an issue with the 2014 cartridge? 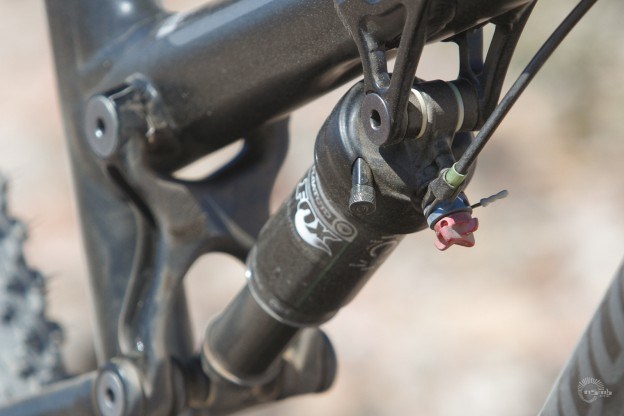 Remote CTD out back is the only time I play with rear damper settings on the trail. Here on the Thunderbolt its effects are quite noticeable.

It’s great to see XT for brakes and shifting (with an XTR rear derailleur) on a bike at the $4000 price point. We also get Stan’s Crest rims with colour matched green decals and the Race Face Turbine cranks, bar, stem, and seat post – wait, seat post? Yeah, I would say based on this choice alone – the lack of a dropper post – Rocky has situated the Thunderbolt in the XC category. Oh, and the Continental X-Kings, which are alright for gentle terrain but find their limits quickly. 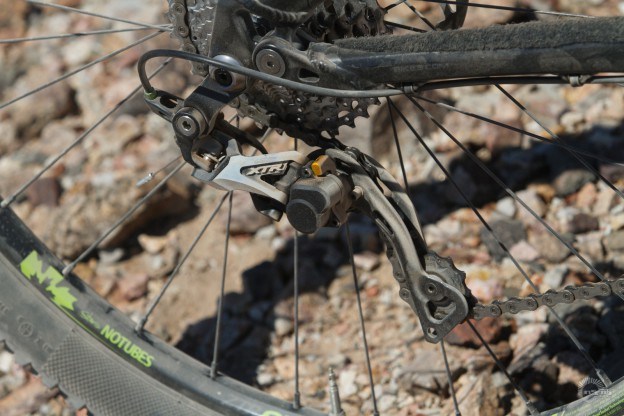 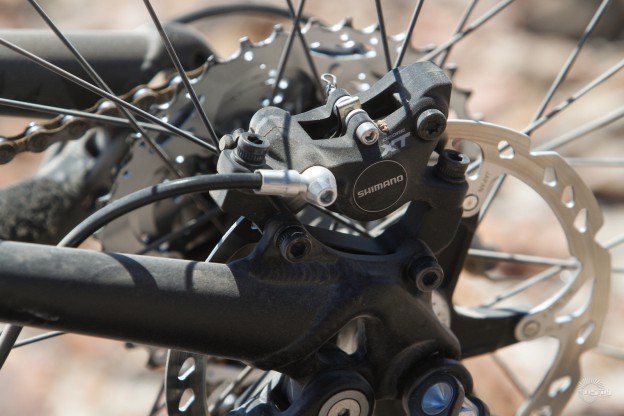 XT stoppers are a good place to put your money. 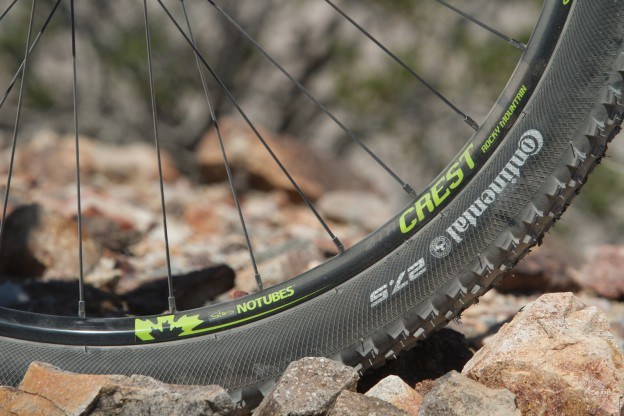 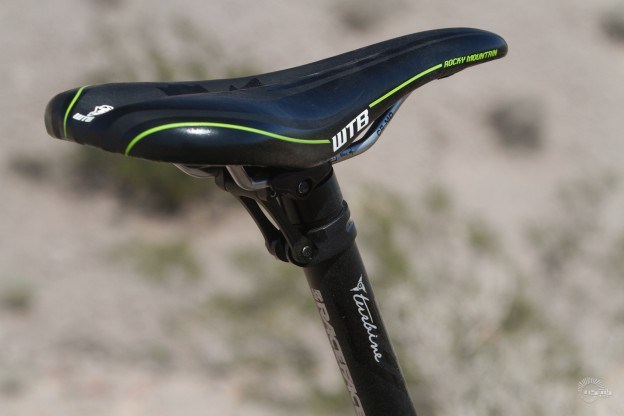 Colour matching continues with the seat and the Turbine post is sweet but would not be the choice for this guy.

While short travel, small-wheeled XC bikes are becoming less and less common, the 120mm bike is a good compromise for riders who desire that nimble feel – and is still faster than what I would consider a Trail bike. You could put a heavier tires and a dropper on the Thunderbolt but you may want to move up to the Altitude if you desire the steep and deep. 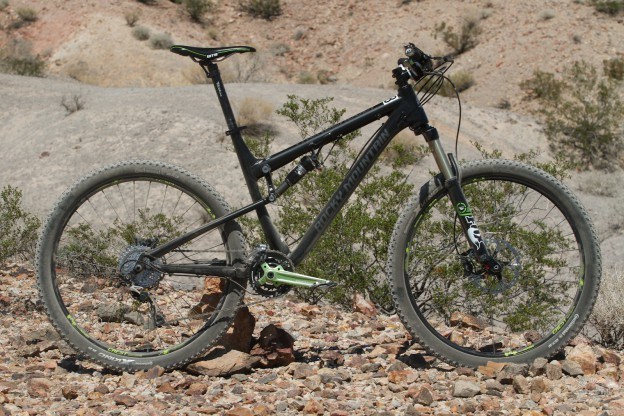 There is still room in the lineup for a 790 and a beefed up BC Edition of the Thunderbolt, so my own idea of the ideal 120mm Rocky could still be out there – but at the price point the Thunderbolt 770 is a fast, good-looking bike with no-nonsense spec.

The lines are still blurred between XC-plus and Trail-light. Do you think this bike deserves a dropper post, or is it good as is?

Man I love this bike! It climbs, it descends well. The only upgrade I made is a reverb post because it really needed. I figured it out when I found myself descending the Enduro trail in Mt Ste-Anne! I think it's best average Joe (like we mostly are!) bike there is!

"…and is still faster than what I would consider a Trail bike."

Nicely put. Thank you for not just relying on angles and weight to categorize it as one or the other.

Let's have a moment of silence to recognize how far we've come. The original Thunderbolt: