Last August, Rocky Mountain launched the aluminum Instinct at Eurobike. This was the second bike in the Rocky lineup to feature Ride 9 adjustable geometry, and its thunder was stolen by the 650B Altitude launched just a couple weeks earlier at Crankworx. The Instinct was a sleeper hit though, and has proven popular at dealers in Europe and North America.

Fast forward to June 2013 and Rocky was ready for a true launch of the new carbon version, taking advantage of the opportunity to show a group of hungry journalists their new North Vancouver facility and to shred some freshly buffed trails. I stumbled the four minutes down the hill to Rocky’s new office and joined an international crew for a ride in my back yard…

We have a 2013 Instinct 970 on long term test and I rode that bike enough to conclude two things: first, the value for money in spec is really good with these bikes; and second, the Large frame fit on the small side. For the launch I lined up an XL frame to see if a 625mm horizontal top tube would feel better than the 600mm on the Large. 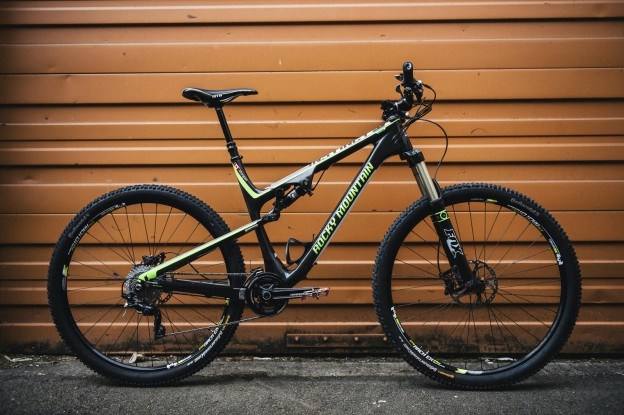 My ride for the day, an XL carbon 2014 Instinct 970 MSL. Frame geometry on the 130mm 29er platform remains the same from 2013, while we see the introduction of a beefed up BC Edition version (below). The new frame weighs in at 2350 grams or 5.18 pounds including shock and all hardware. 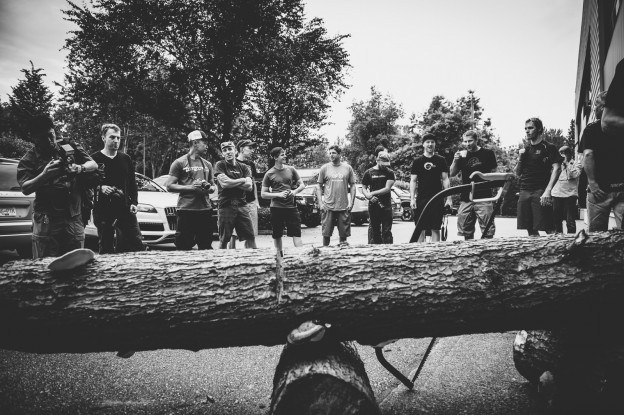 We celebrated the new office opening with a log cutting ceremony. 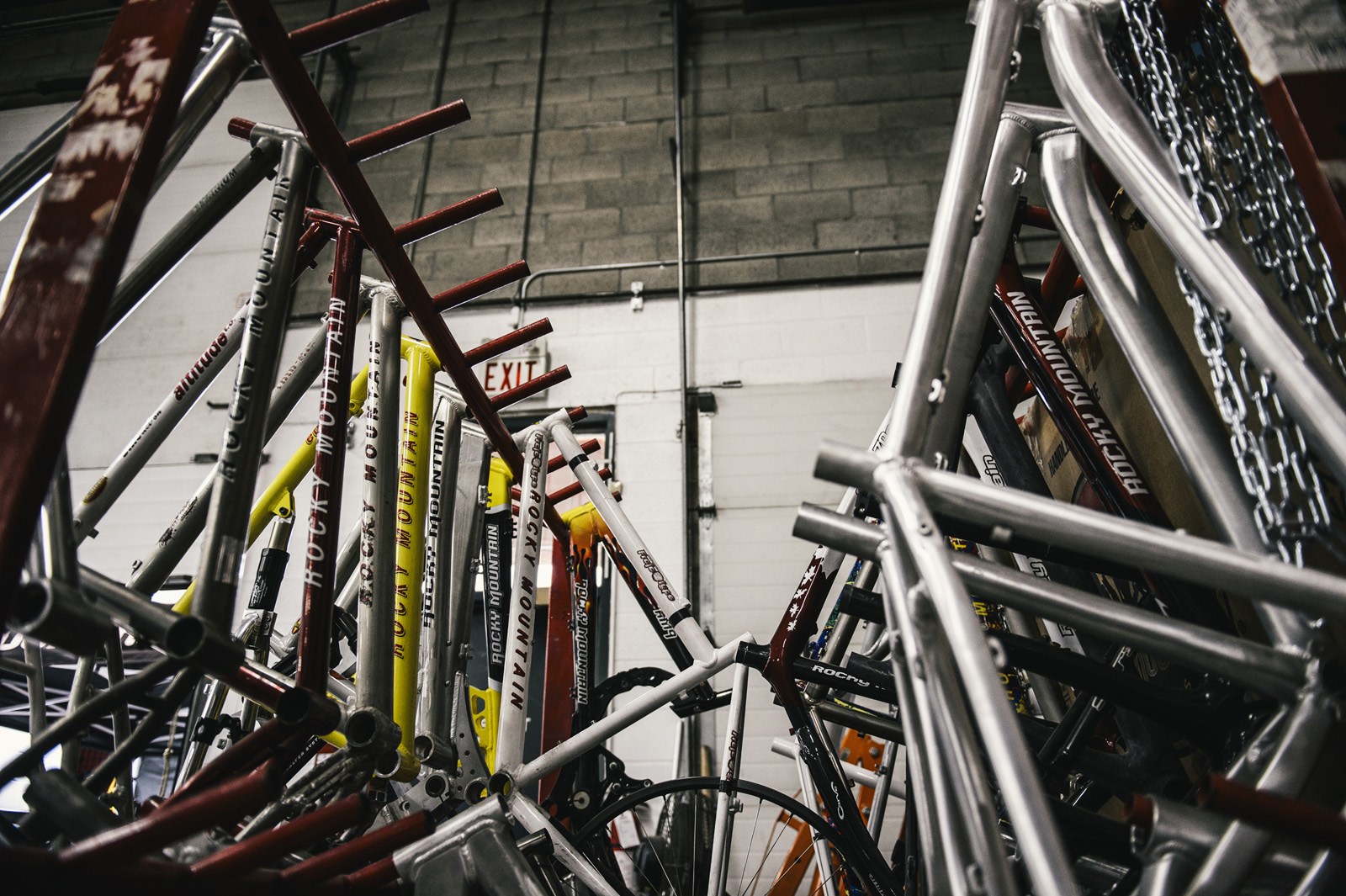 Rocky is proud of their history and it shows at the office even without being dressed up for a media visit. 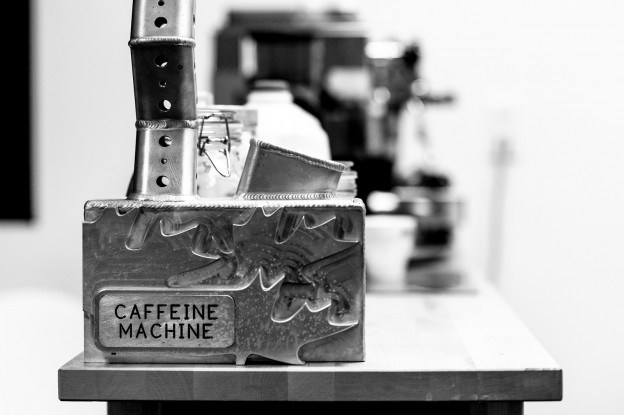 They’re also proud of their love for coffee. 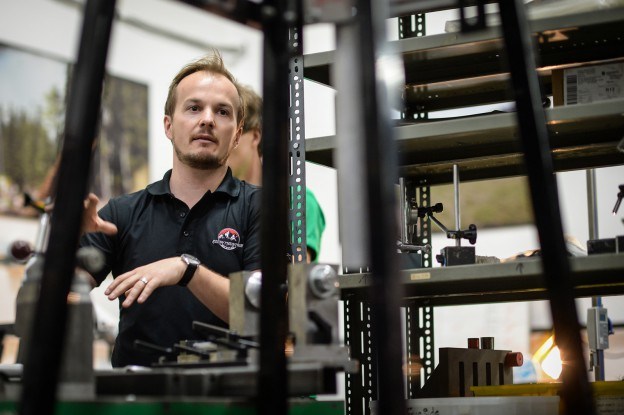 Alex Cogger took us on a tour of the office and prototyping faciliities. 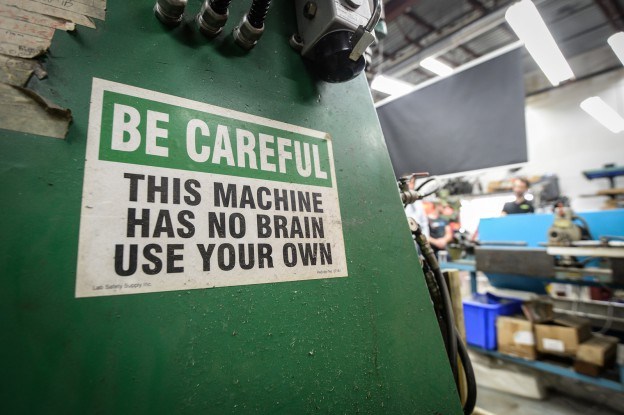 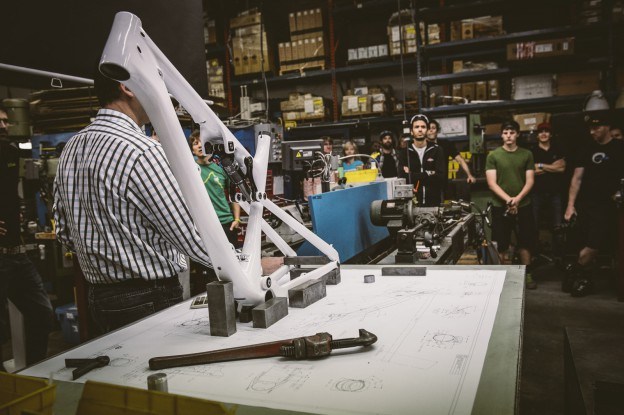 Dimly lit conversation around one of the Instinct prototypes. 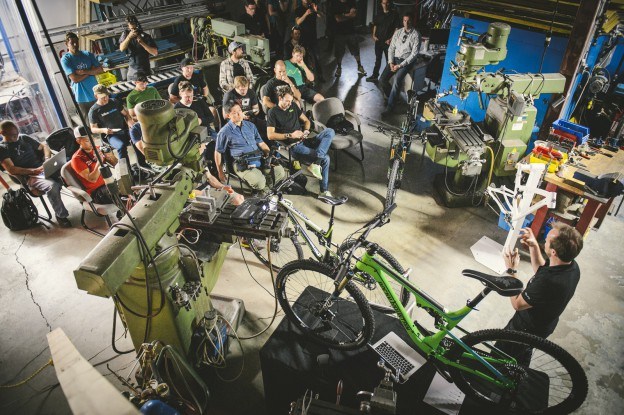 Cogger tells us why Instinct is Rocky’s “most versatile bike of all time.” 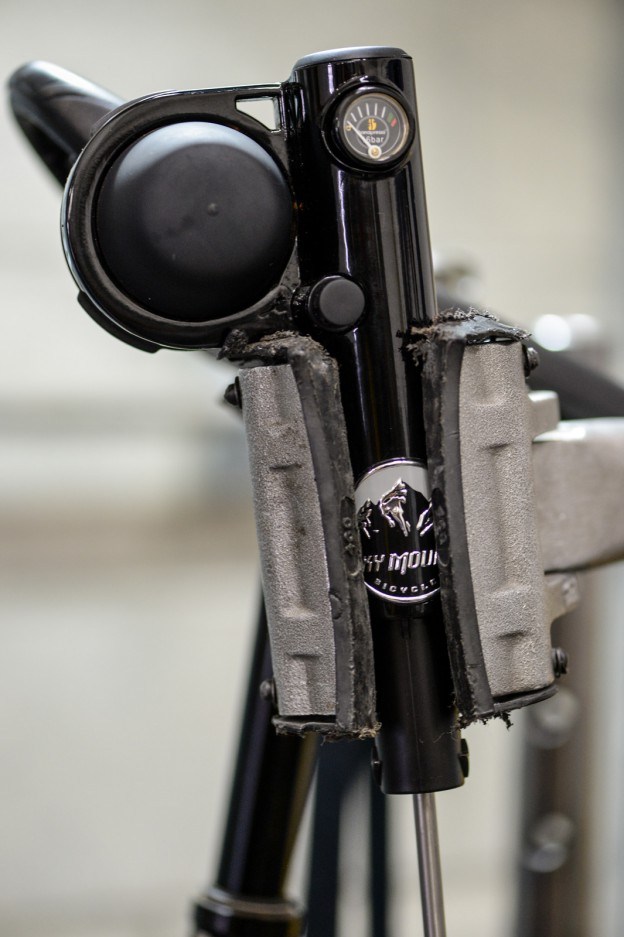 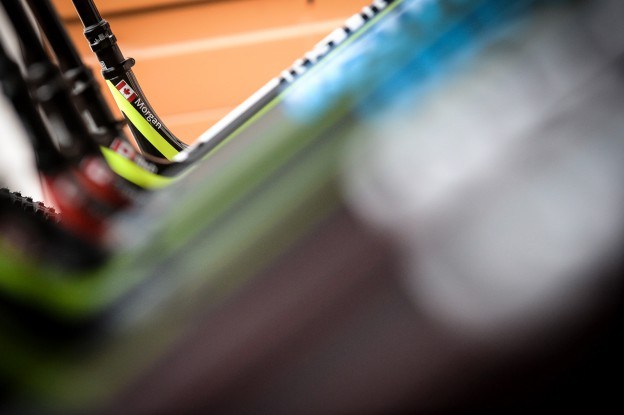 Off to the trails we go… 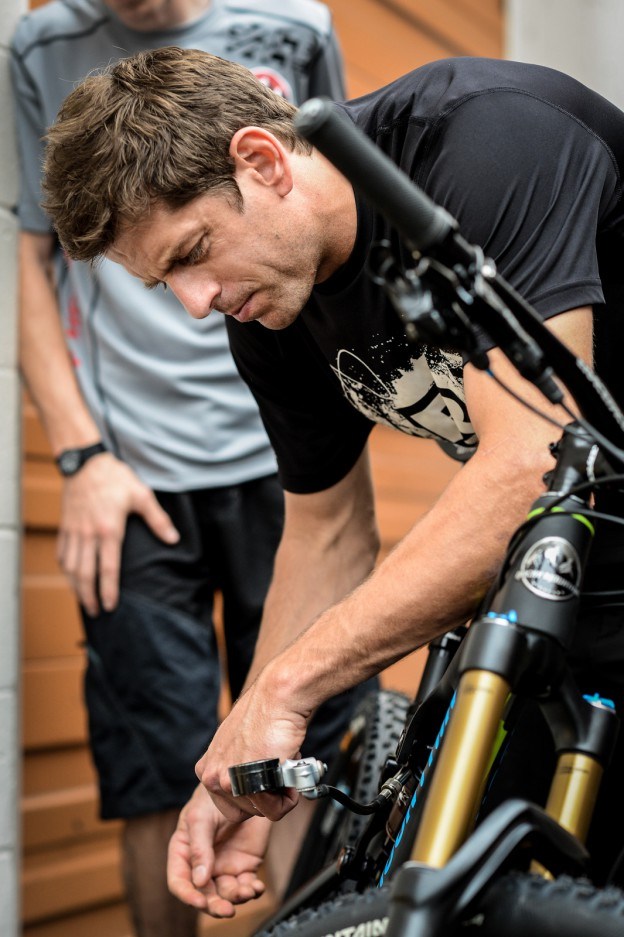 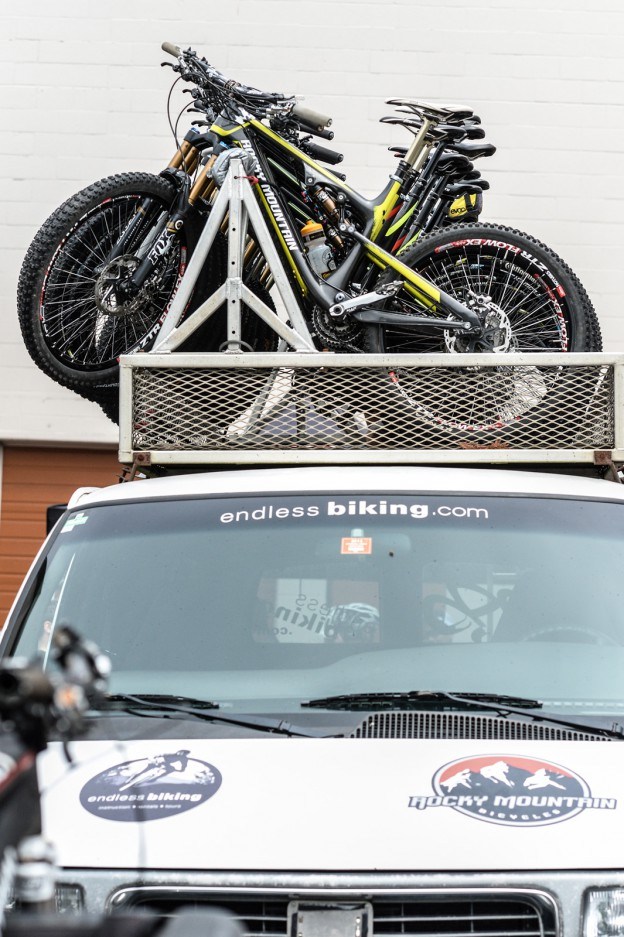 Endless Biking helped us out with a shuttle to the trailhead and good guidance along the way. 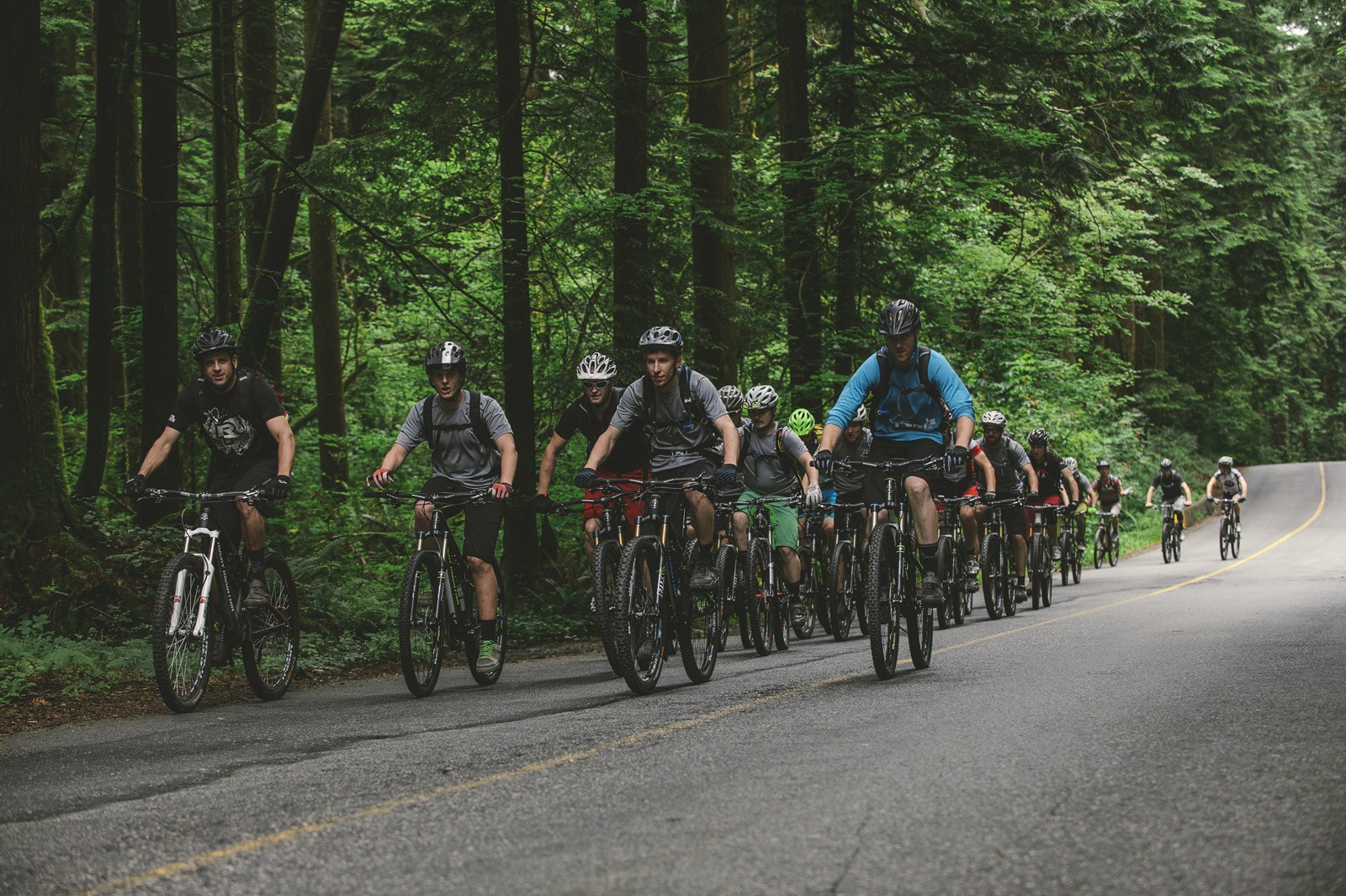 Apparently I get a yellow line violation for this one. 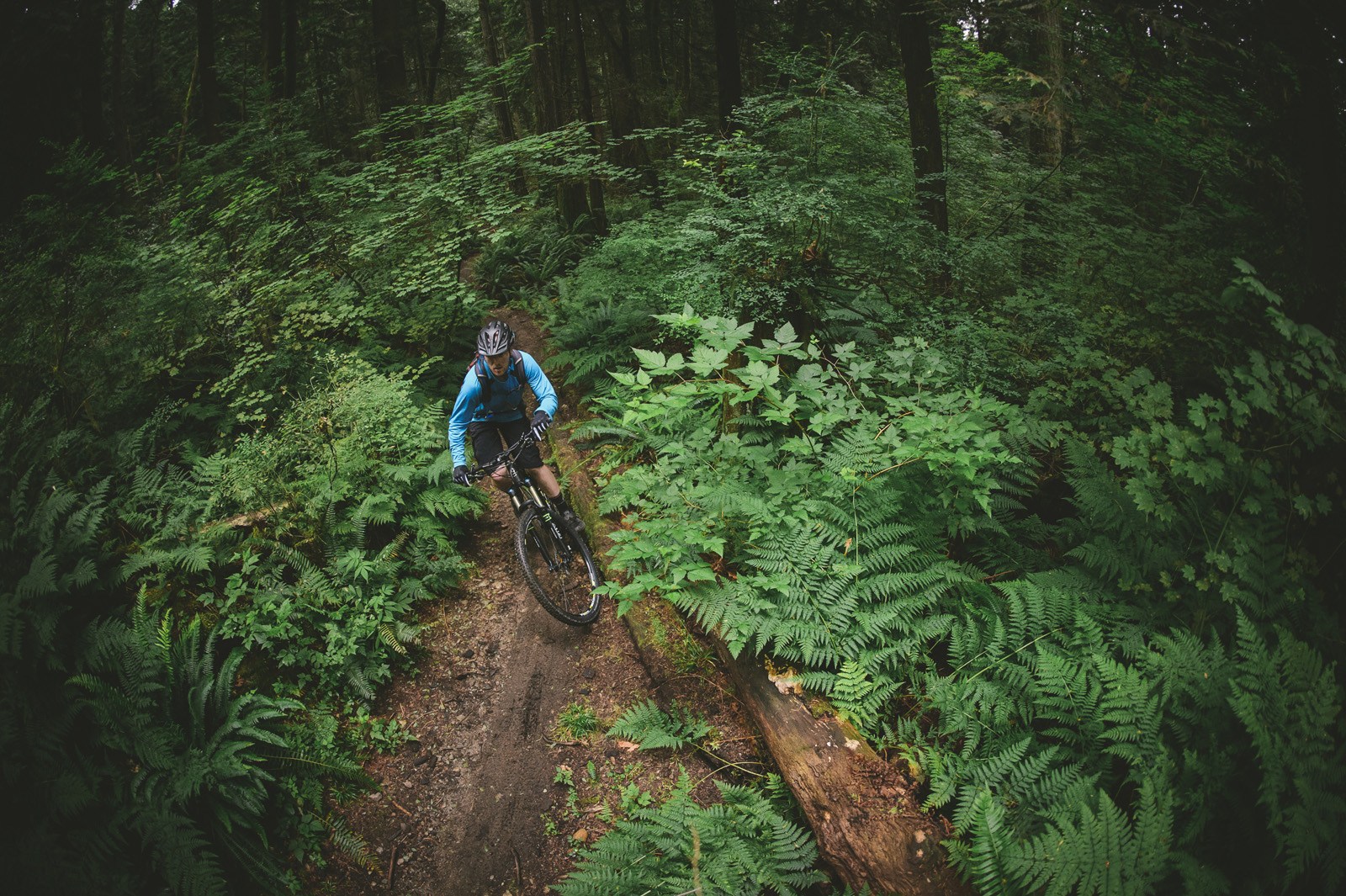 The XL frame was a good comparison to the Large tester. I definitely felt more comfortable climbing, and the bike was more stable descending. With a couple of tweaks to the setup I believe I would land at a medium length stem on the XL frame rather than a long stem on the L. 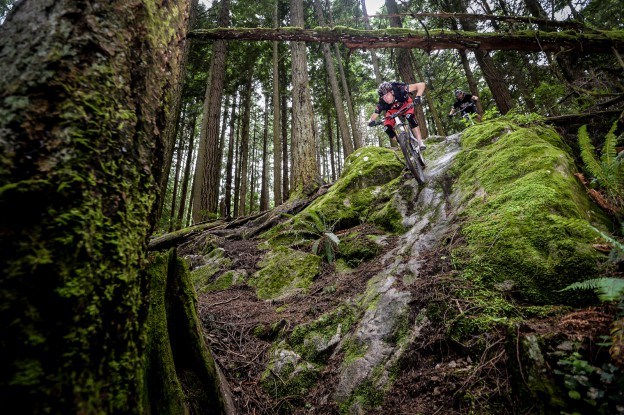 Ruben Salzgeber shows us what the Instinct is capable of. 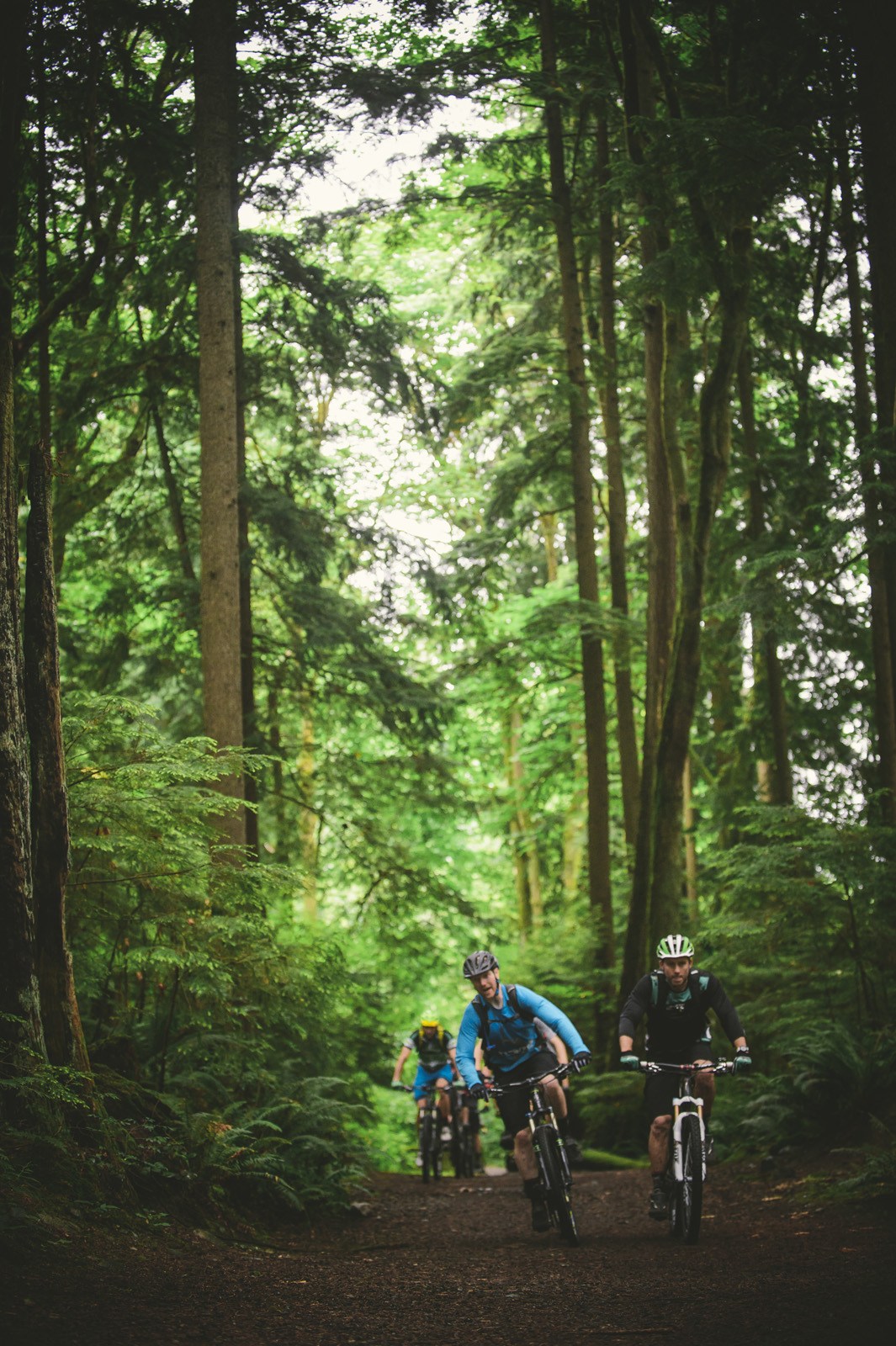 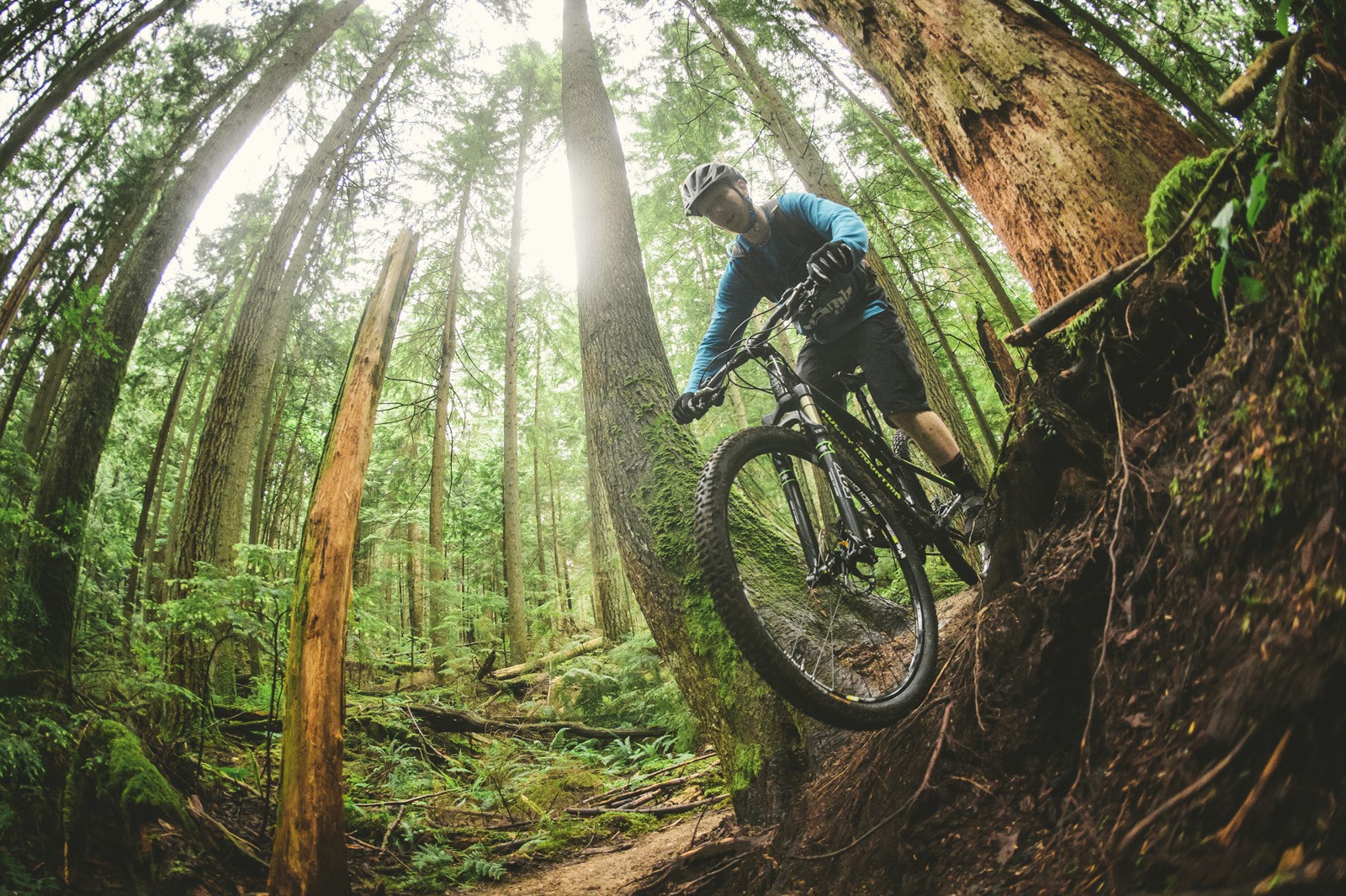 For a 5″ 29er the Instinct feels reasonably light and nimble underfoot. The 2.2″ Continental tires are not exactly confidence inspiring in the wet and would quickly make their way off the bike if it spent much time in my hands. 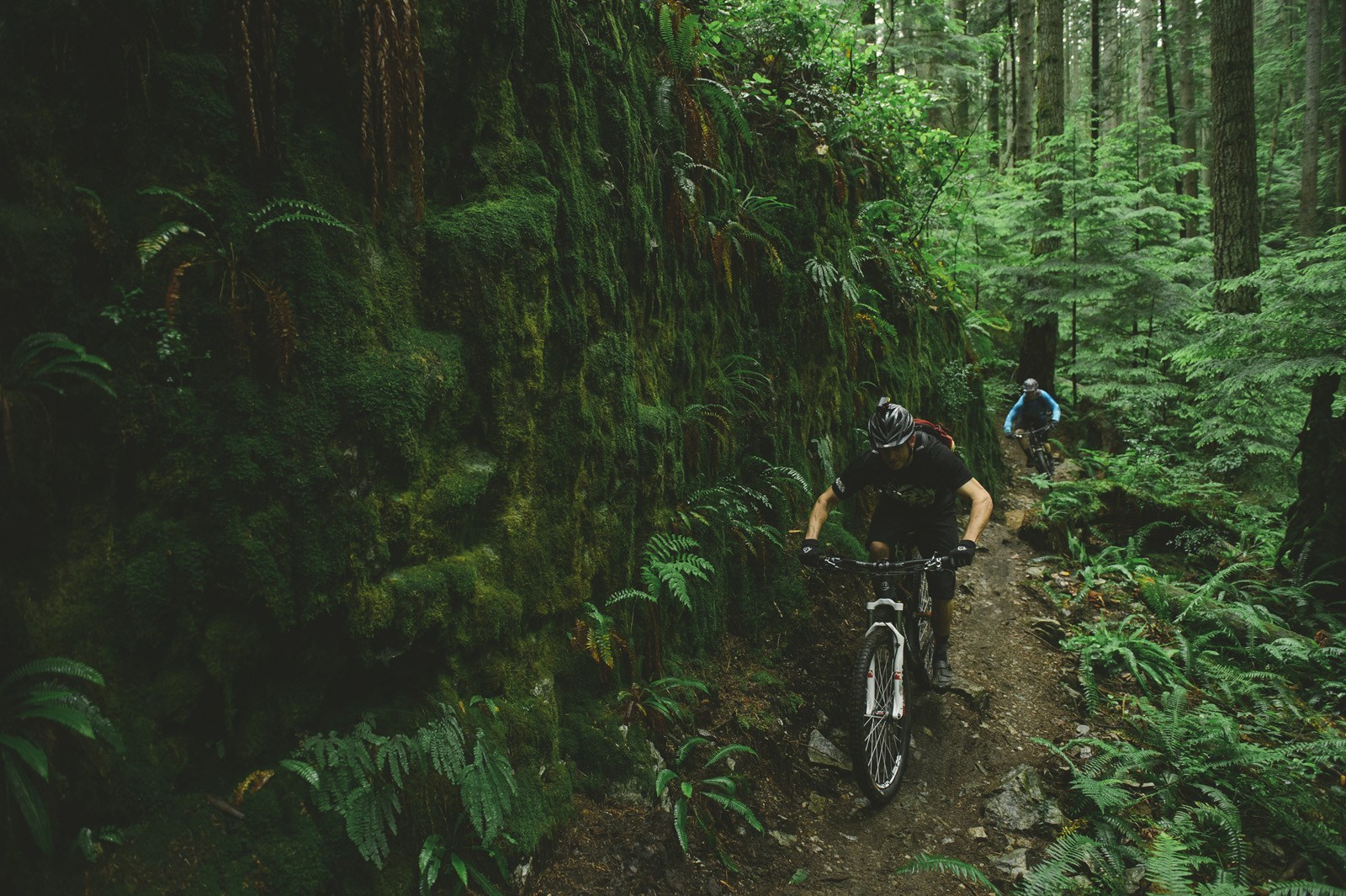 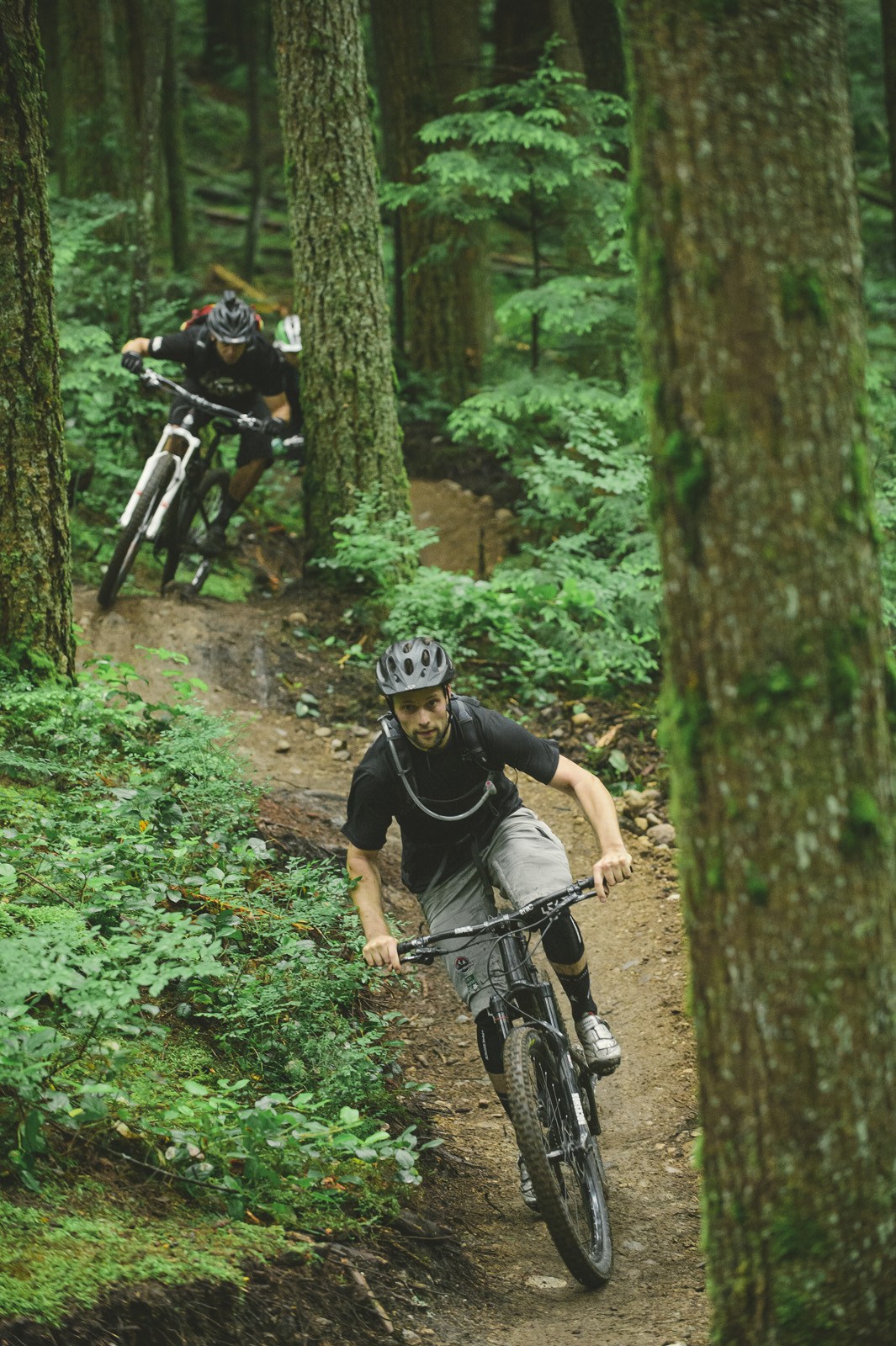 Rocky Product Manager Ken Perras leads Wade through the new High School trail, a hand built bermy pumptrack through the woods. Ken gets credit for spec’ing a 750mm bar on all Instinct models and a 780 on the BC Edition. 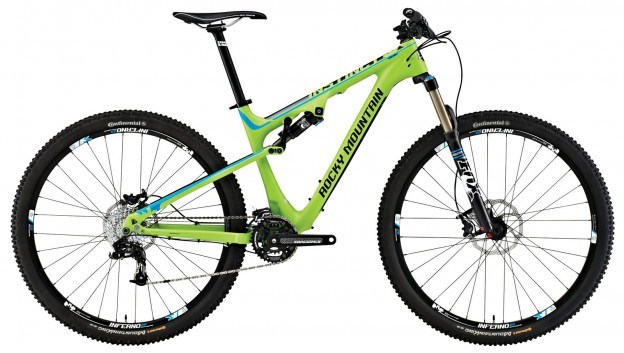 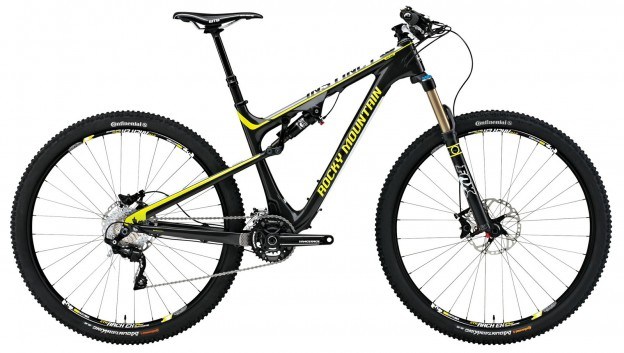 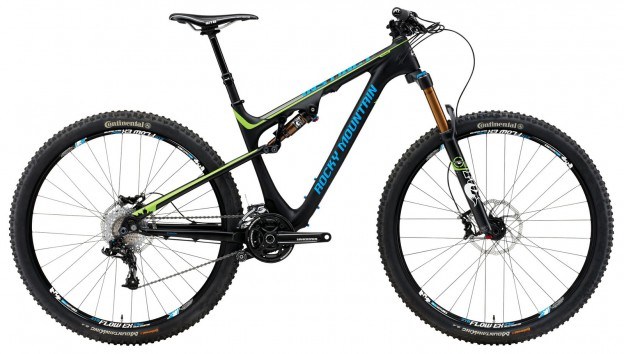 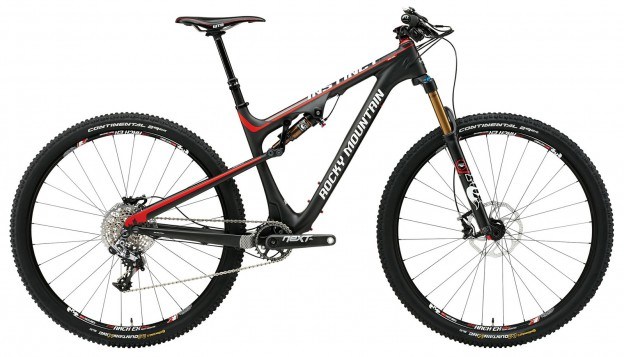 With just a short time on the carbon Instinct I am leaning toward thinking the XL frame is more suited to my fit and riding style. I rode the bike in neutral setting for this ride which bodes well for dropping it into one of the slacker modes which will shorten up reach a touch. The BC Edition bike is a great addition to the Instinct family and it’s great to see another well-engineered and well-spec’d bike make its way to the showroom. We should be seeing the carbon Instinct in shops in October…

Does the carbon Instinct tickle your fancy? What about that new BC Edition?

Morgan, how tall are you?

Is that Race Face Next SL a spiderless crank?