My first full suspension frame was a 2006 Kona Stinky Deluxe. The thing I remember most about that bike was the big rocker arms that blew my seat apart on a couple of occasions ( I have always been a whiner about saddle height). I’ve ridden a number of different full suspension frames since then, but none of them have been Kona. Having heard nothing but good things about the new Process lineup, I’m excited about my opportunity to get back on a Kona by testing the 2014 Process 153 DL (Deluxe).

Thus far I can understand those good words. I was comfortable on the Process 153 DL the moment I swung my leg over it. So far, the bike has been quite the partner for the descents. It’s encouraged me to go a little faster, kept me in the cockpit when faster tried to get me in trouble, and surprised me with more playfulness than I expected a 153mm travel bike to have.

Just to clear the air right away about one thing in particular that I keep hearing about the Process: that it’s ‘spec’ed to shred’. I’ve heard this so often and have had people try to pick out things on my test bike that aren’t grade A spec – that I thought this was a big slogan Kona was swinging around. As far as I can tell, it’s not. Additionally, the Process 153 DL I’m testing is actually espec’d to shred. Check out the photos below for a detailed run through of the build and some initial thoughts about the ride. 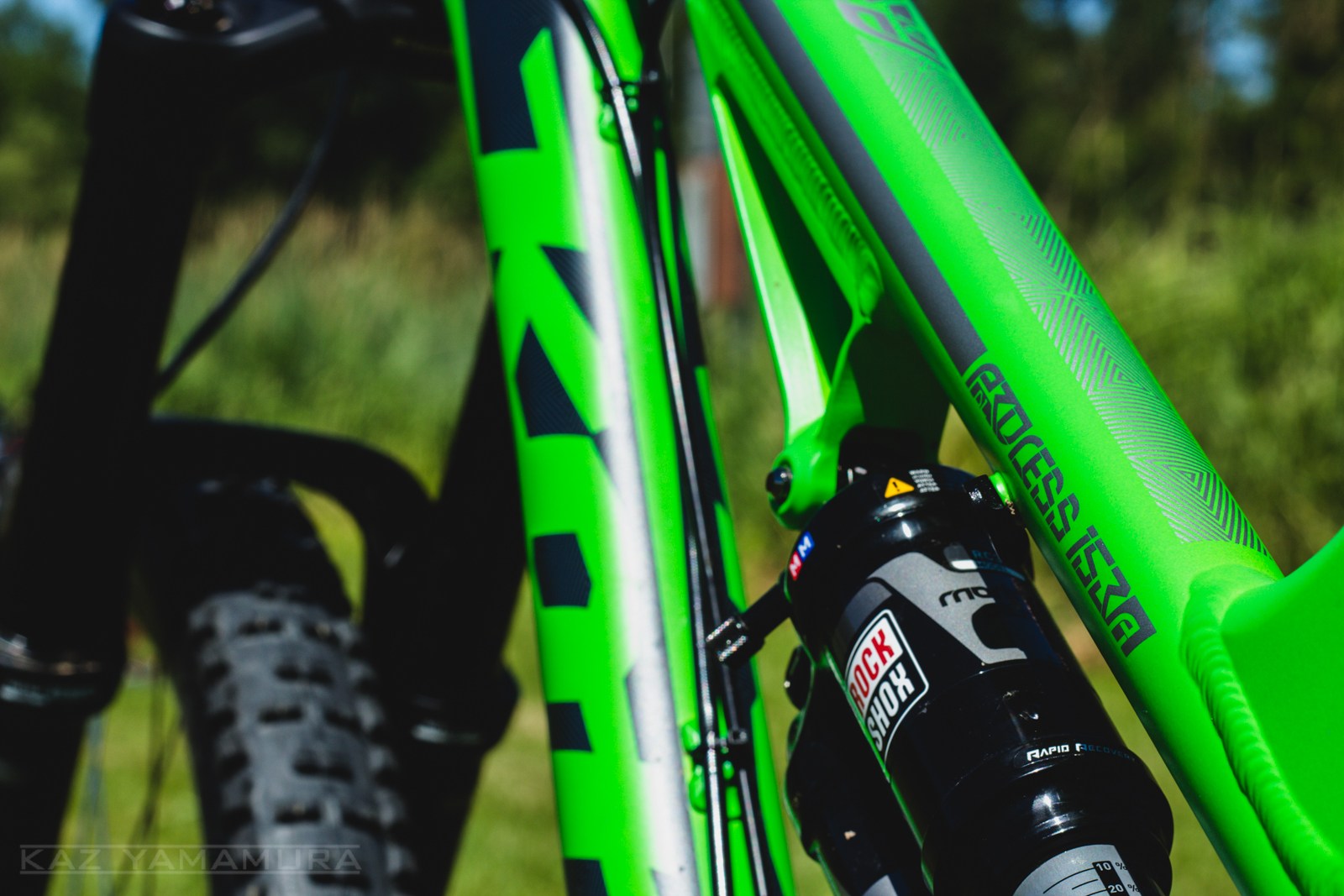 First up for scrutiny is the aluminum frame. The A seen on the top tube here stands for aluminum, and allows for differentiation from future frames made out of C. Price wise the material choice allows Kona to put out some competitive bikes. The least expensive Process is the 134 with a $2699 CDN MSRP, and the 153 DL shown here has a $4999 CDN MSRP. 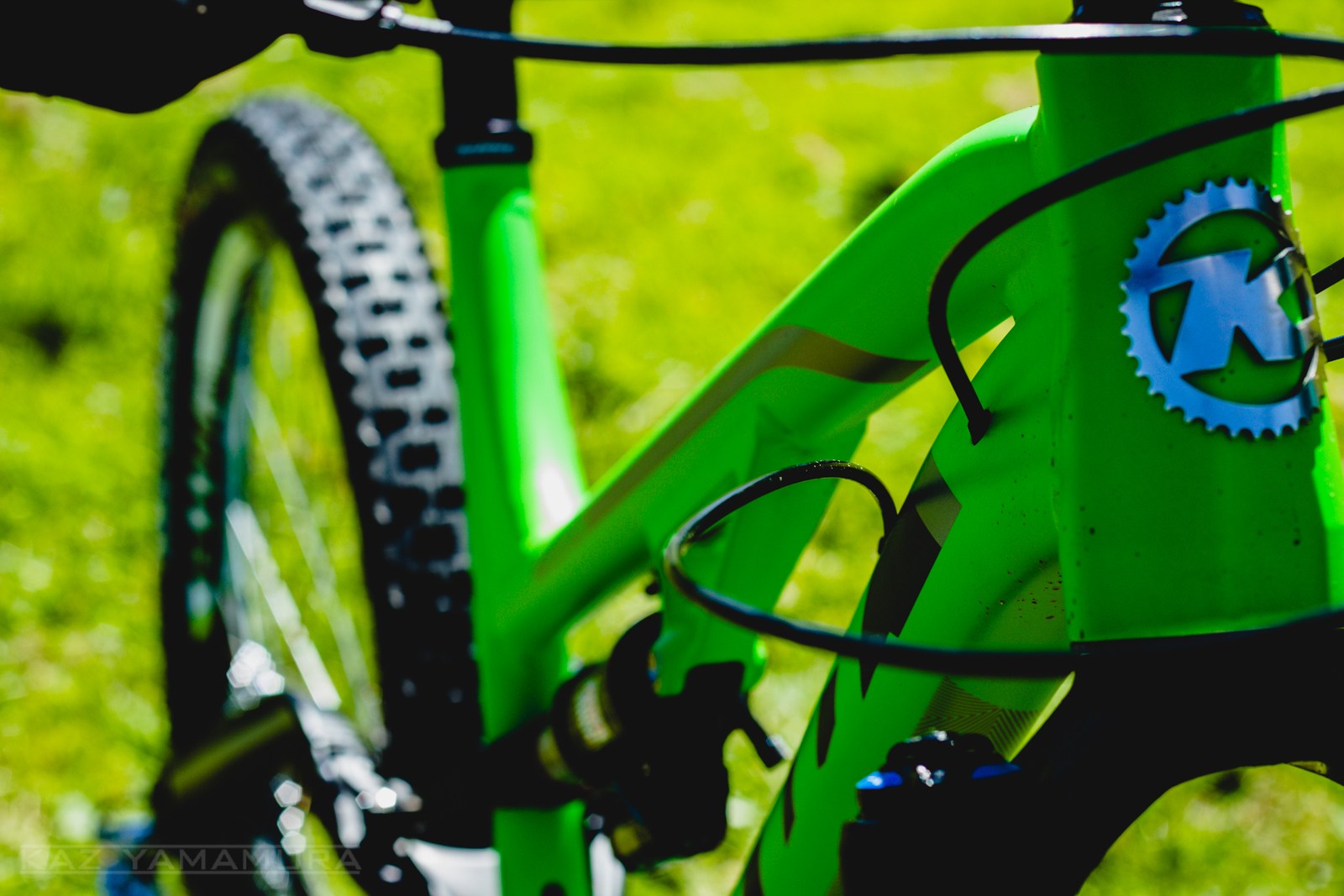 Cable routing is tidy and shouldn’t turn anyone off. The front and rear derailleur cables run through the frame, the rear brake runs along the top of the downtube, while the dropper post parallels the brake line until it enters the base of the seat tube. 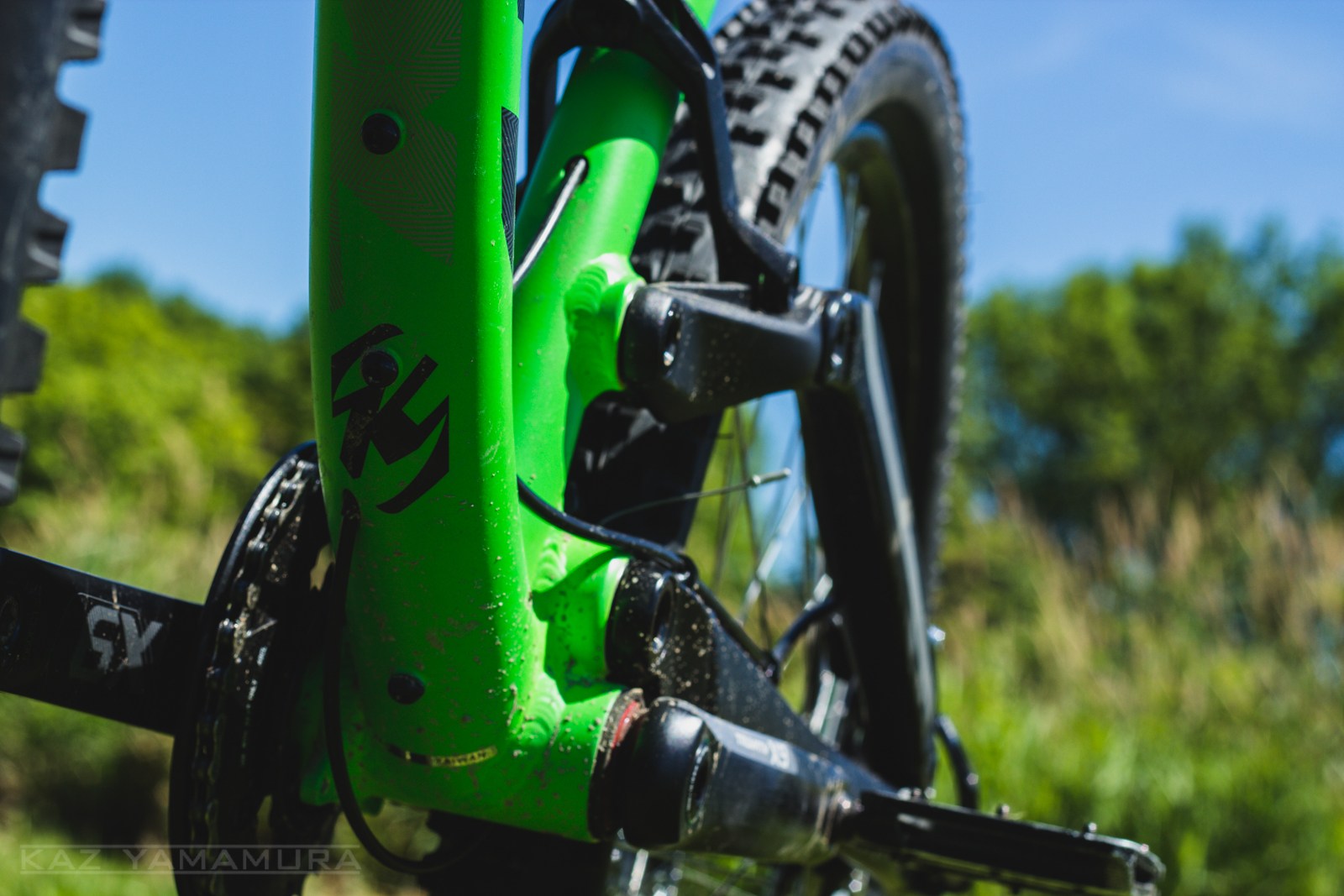 A clear shot of where the dropper post cable and front derailleur cable exit the frame. We also see the bottle cage mounts on the bottom of the downtube. The third bolt closest to the bottom bracket is for cable routing. 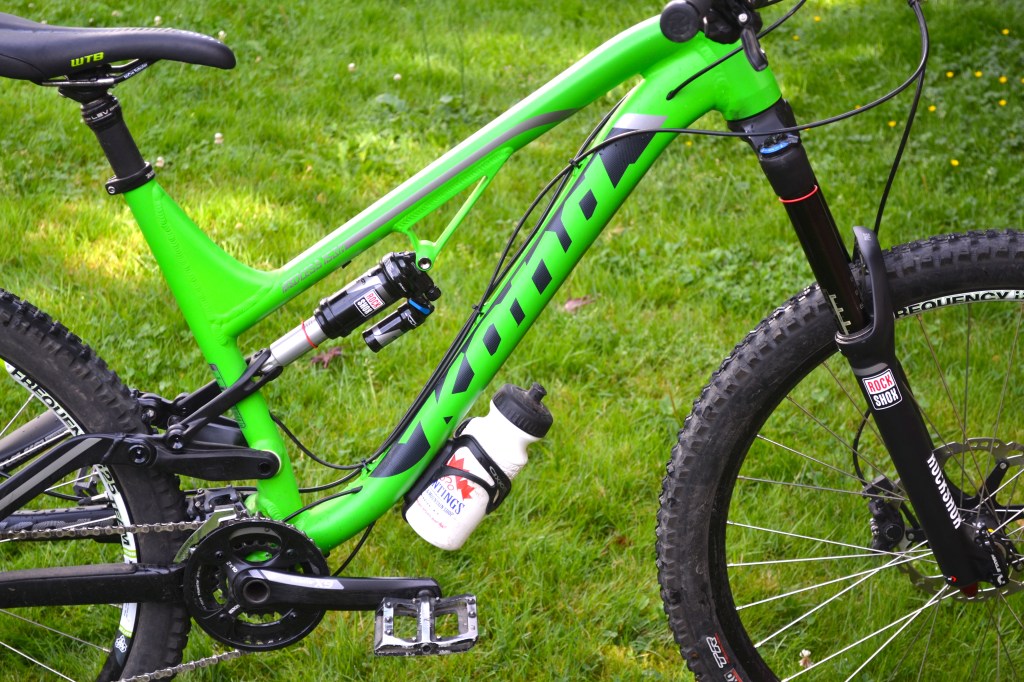 Whether or not you choose to use the bottle mount is up to you. I don’t like to ride with a pack and appreciate having the option. The bottle’s not in an ideal location to reach down for while you’re pedaling, but it is certainly doable. Photo by Cole Altwell. 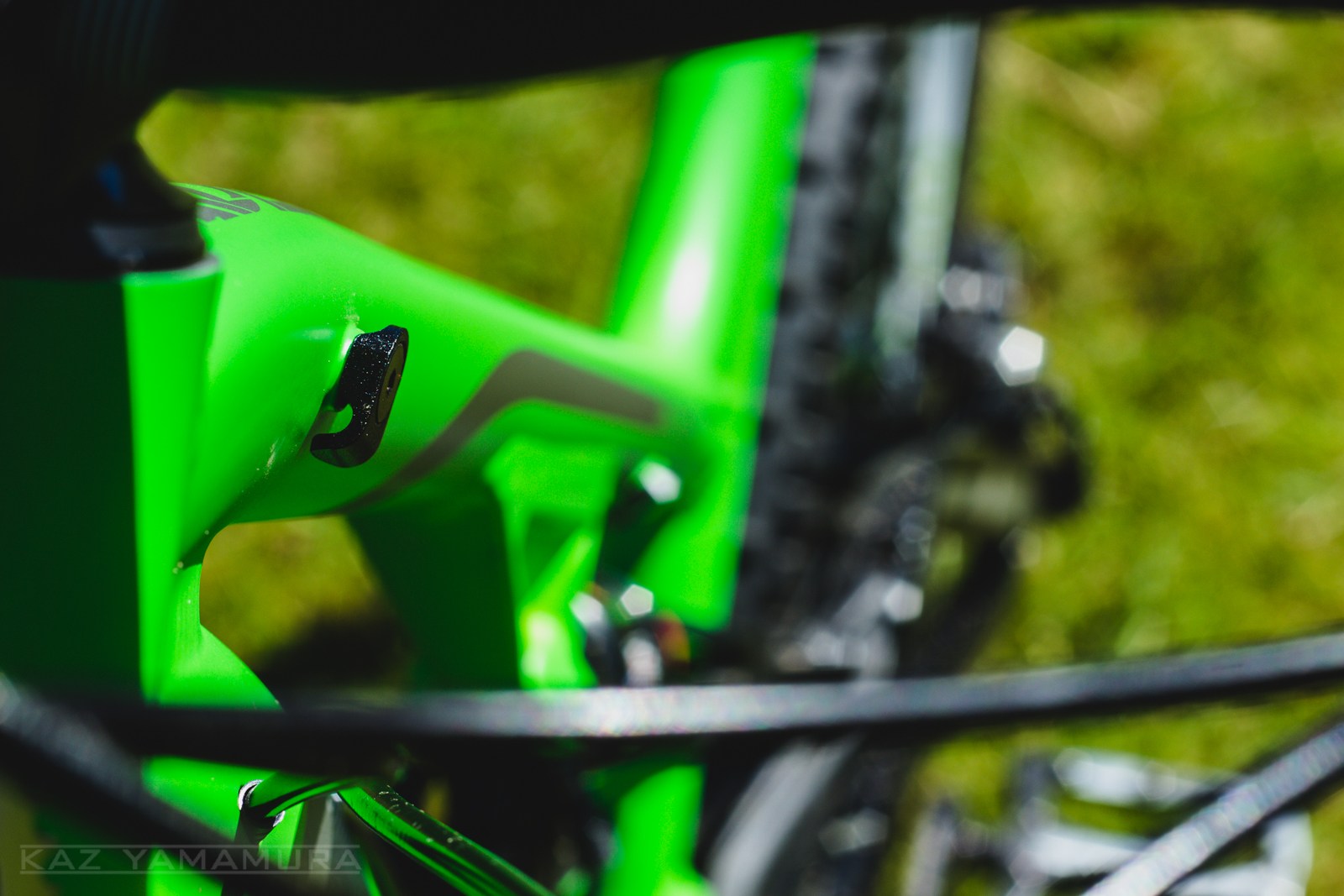 Continuing to keep options open, the frame has mounts to run an externally routed dropper post. Kona doesn’t offer a Process without a dropper post and makes sure the routing is sorted regardless of your budget. 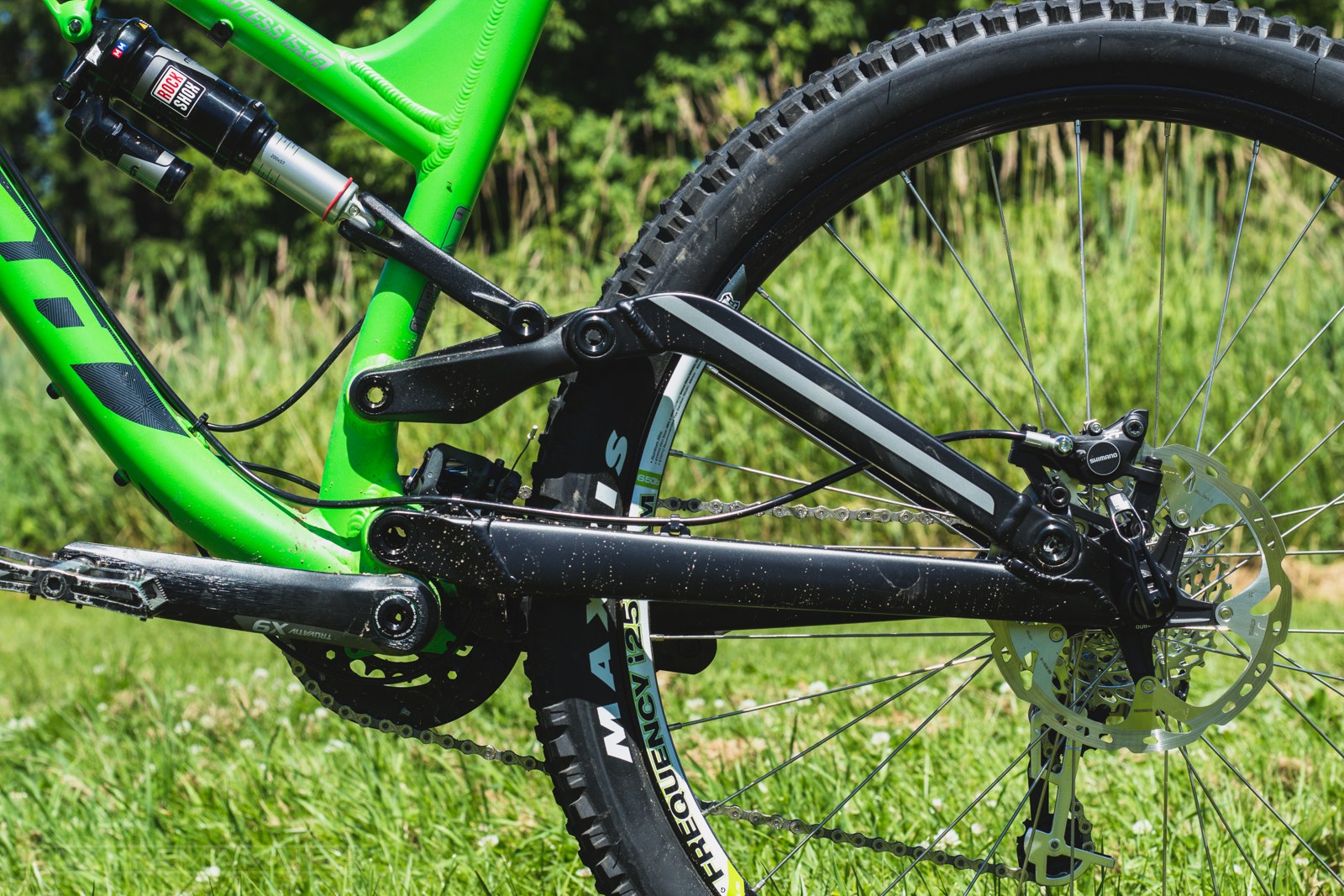 Out back the Process frame uses Kona’s Rocker Independent Suspension. It is explained to be a compact and low slung single pivot suspension design with a linkage actuated shock. 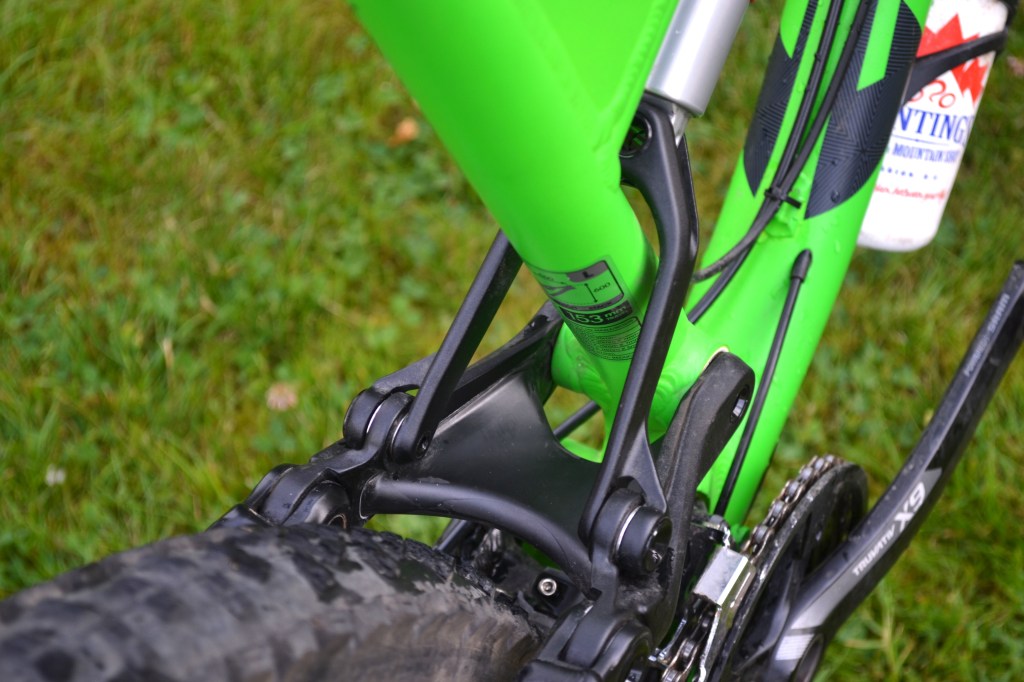 The devil is in the detail. The rocker features a carbon brace, and that’s all the carbon you’ll find on this bike. Photo by Cole Altwell. 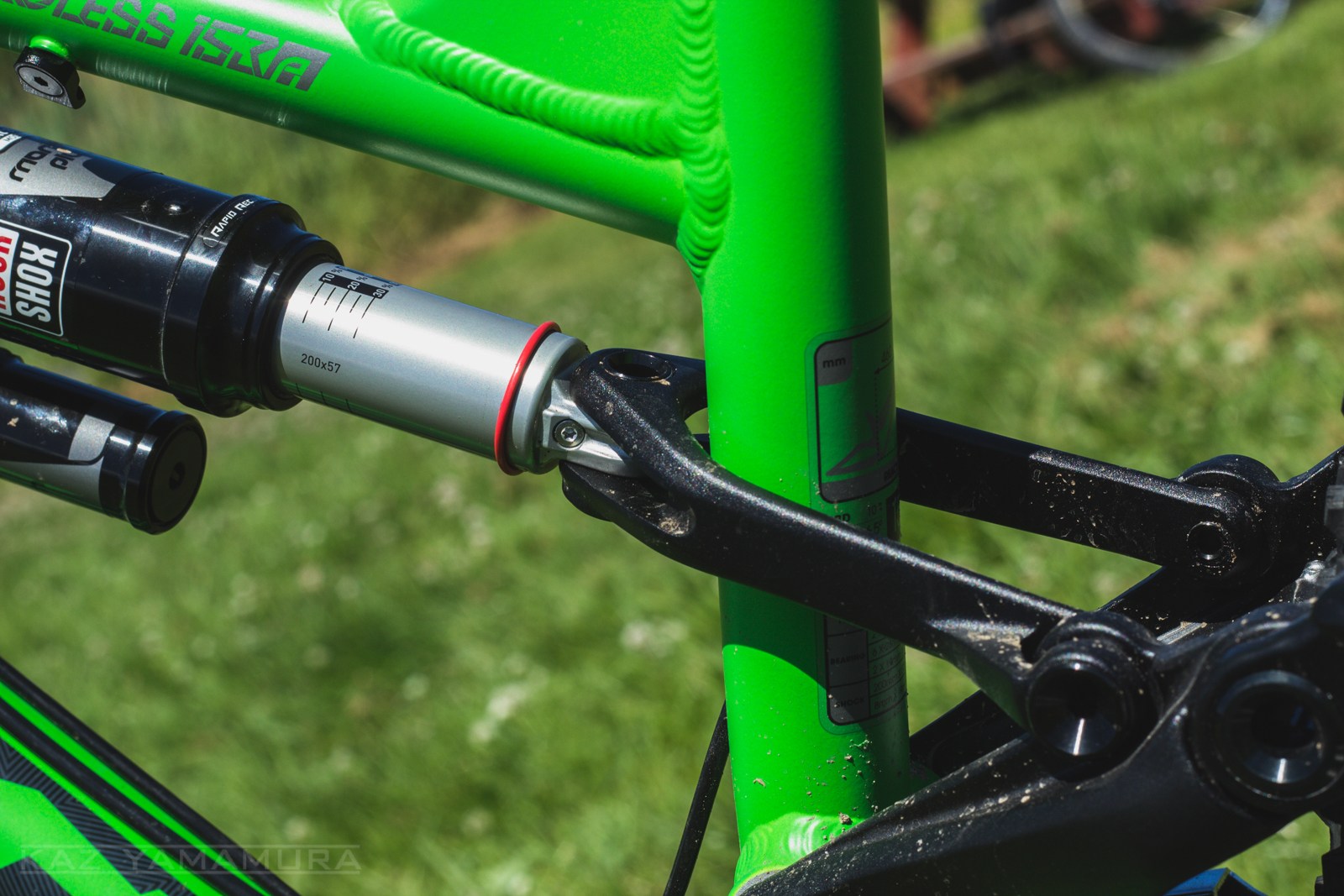 The shock is mounted directly to the yoke seen here, no bushings or proprietary bull scat. I’m coming off a bike that does use proprietary hardware, so it’s a refreshing sight for me not to see it here. 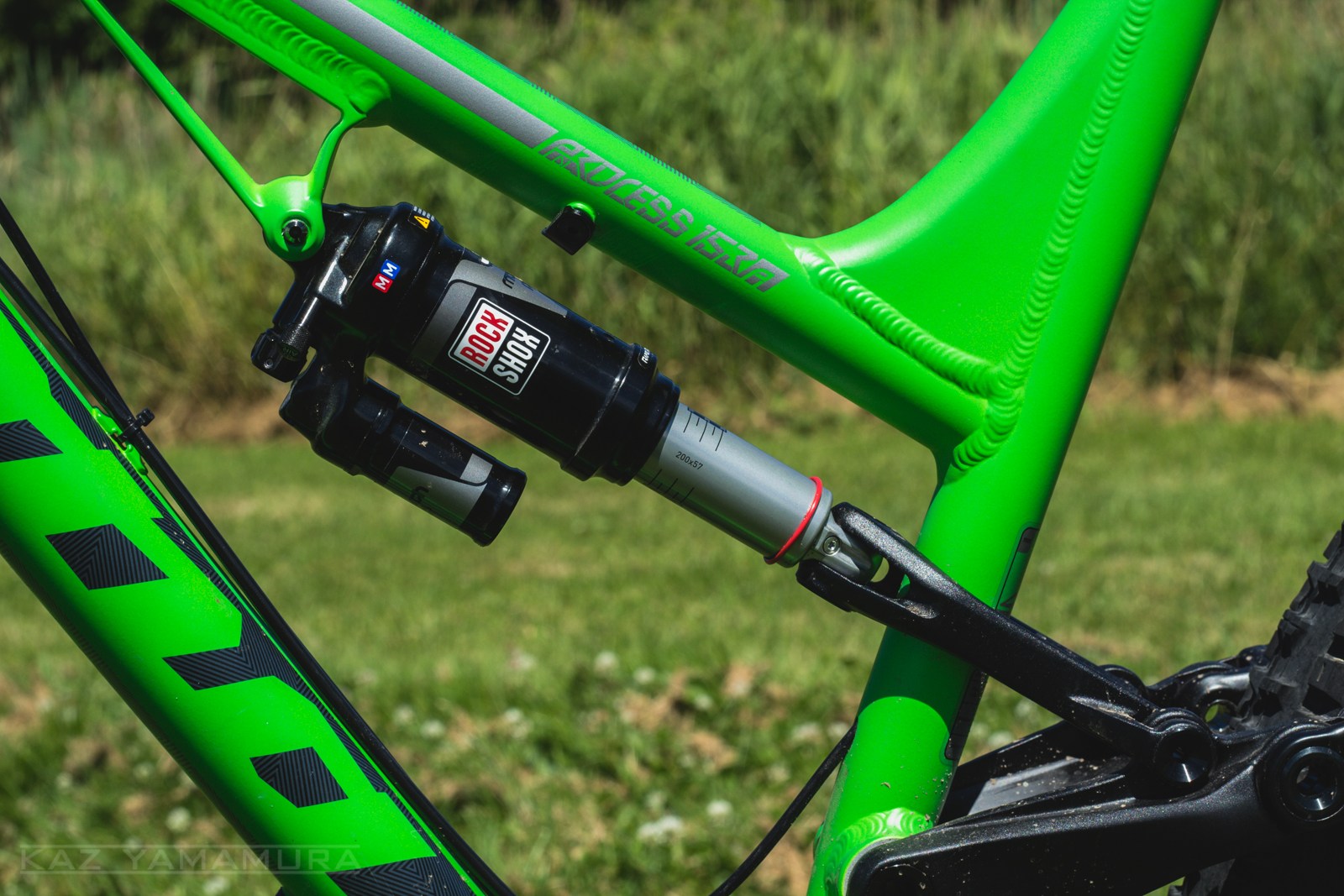 Speaking of the shock, the 153 DL sports a 200/57MM (7.87” x 2.25”) RockShox Monarch Plus RC3. The Process’ Rocker Independent Suspension is said to have a consistent leverage rate curve that matches current air shocks. Kona worked with SRAM to have the spec’d shock custom tuned to match the bike’s leverage rate too. Thus far haven’t felt the need to swap the shock despite having the option to do so. 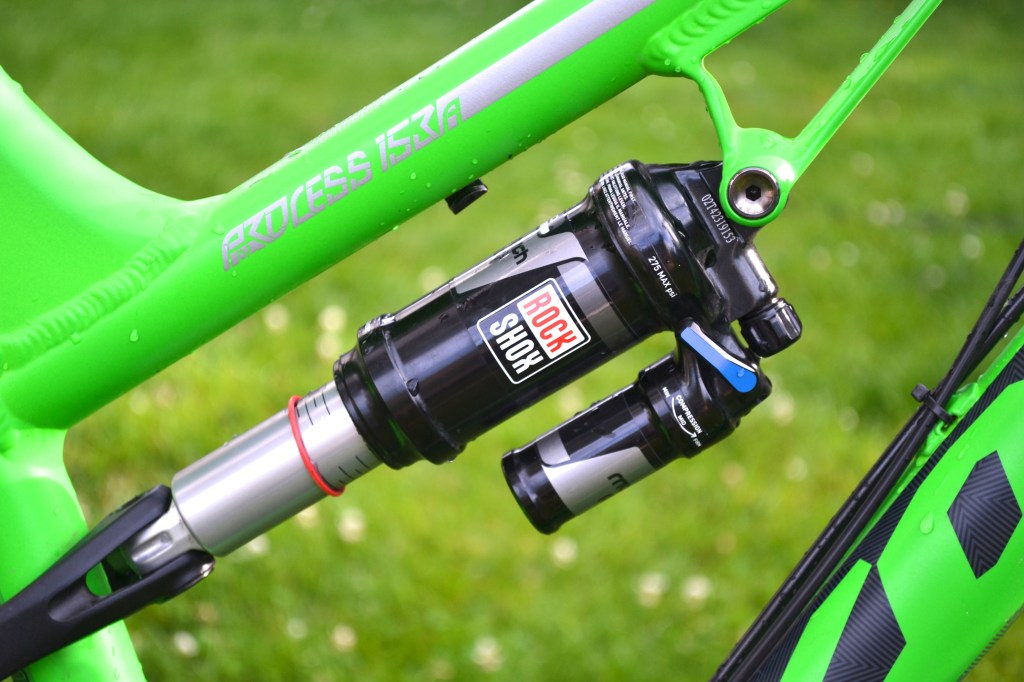 The Monarch Plus RC3 features 3-position compression damping (open, pedal, lock). When I’ve been able to stay in the big ring on a climb I run the shock in either the open or pedal position. The rides where I have needed to get into the granny ring, I’ve reached down and flicked the shock to lock to prevent the bike from bobbing excessively. Photo by Cole Altwell. 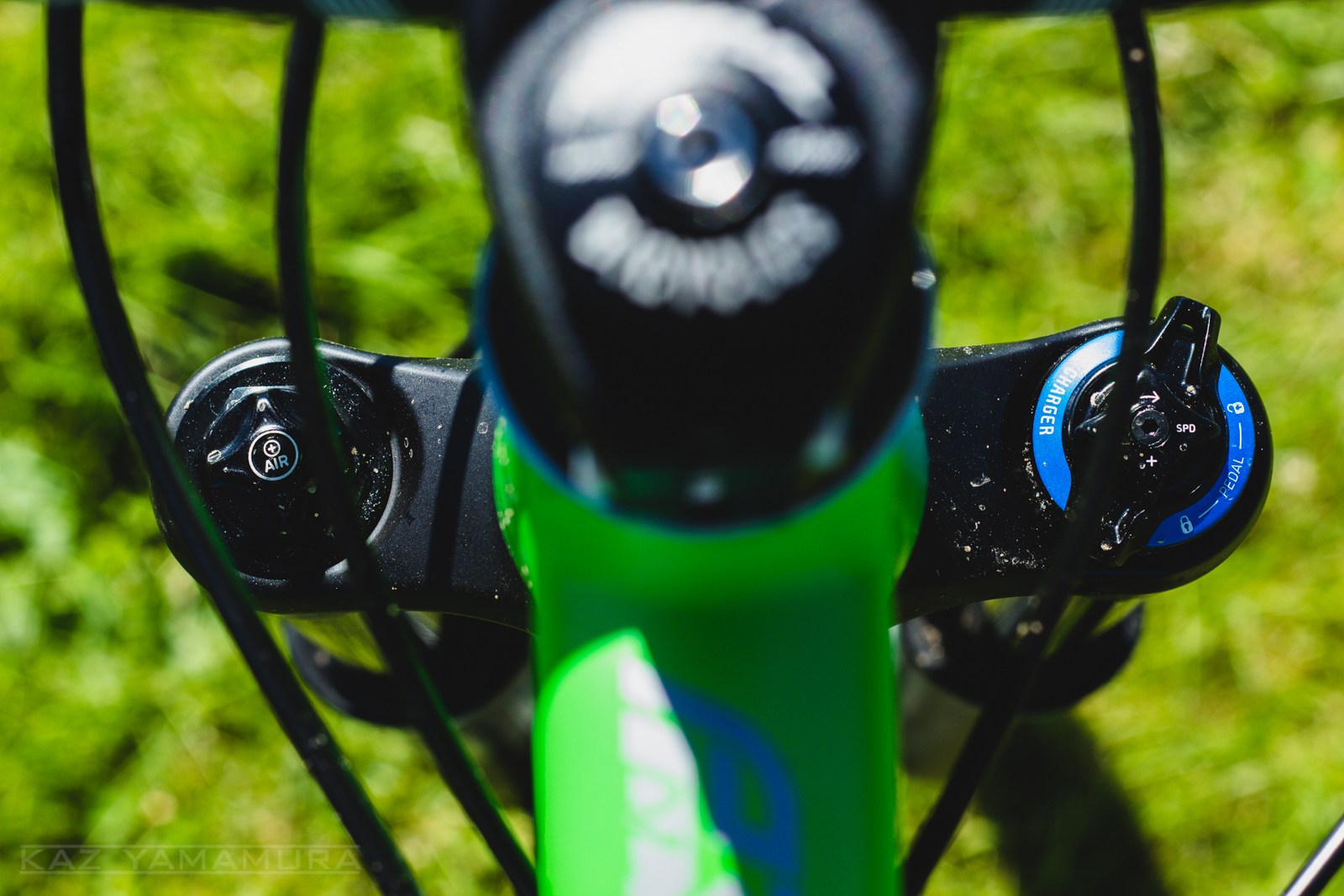 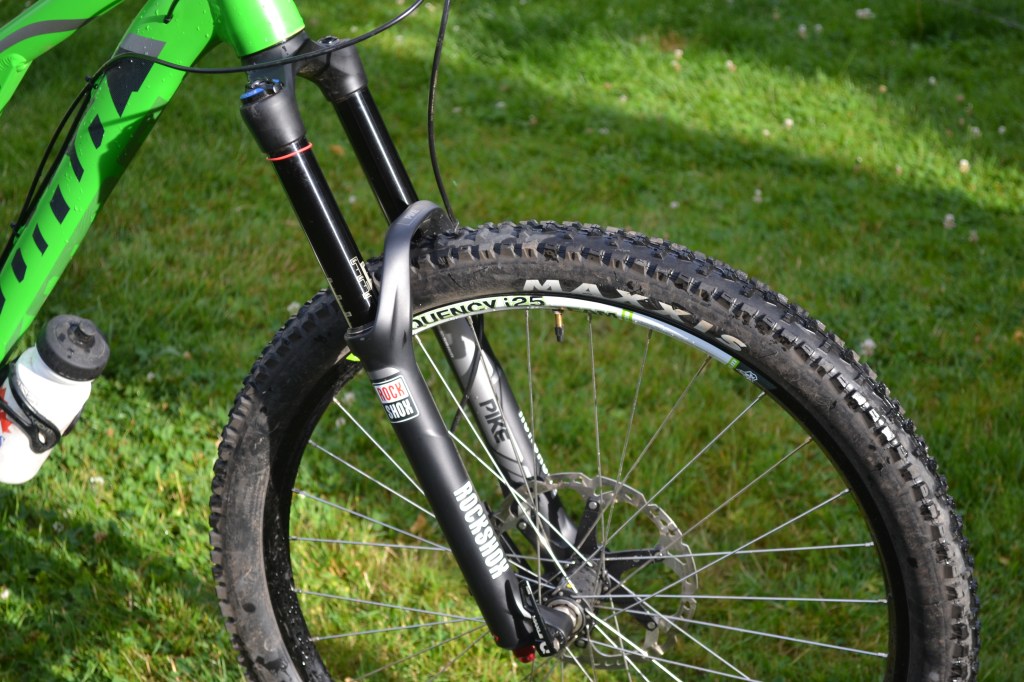 Kona provides a token with Process 153 DL. I was encouraged by a friend to put it in and haven’t regretted it. It’s a quick install and has prevented me from feeling the fork really bottom. Photo by Cole Altwell. 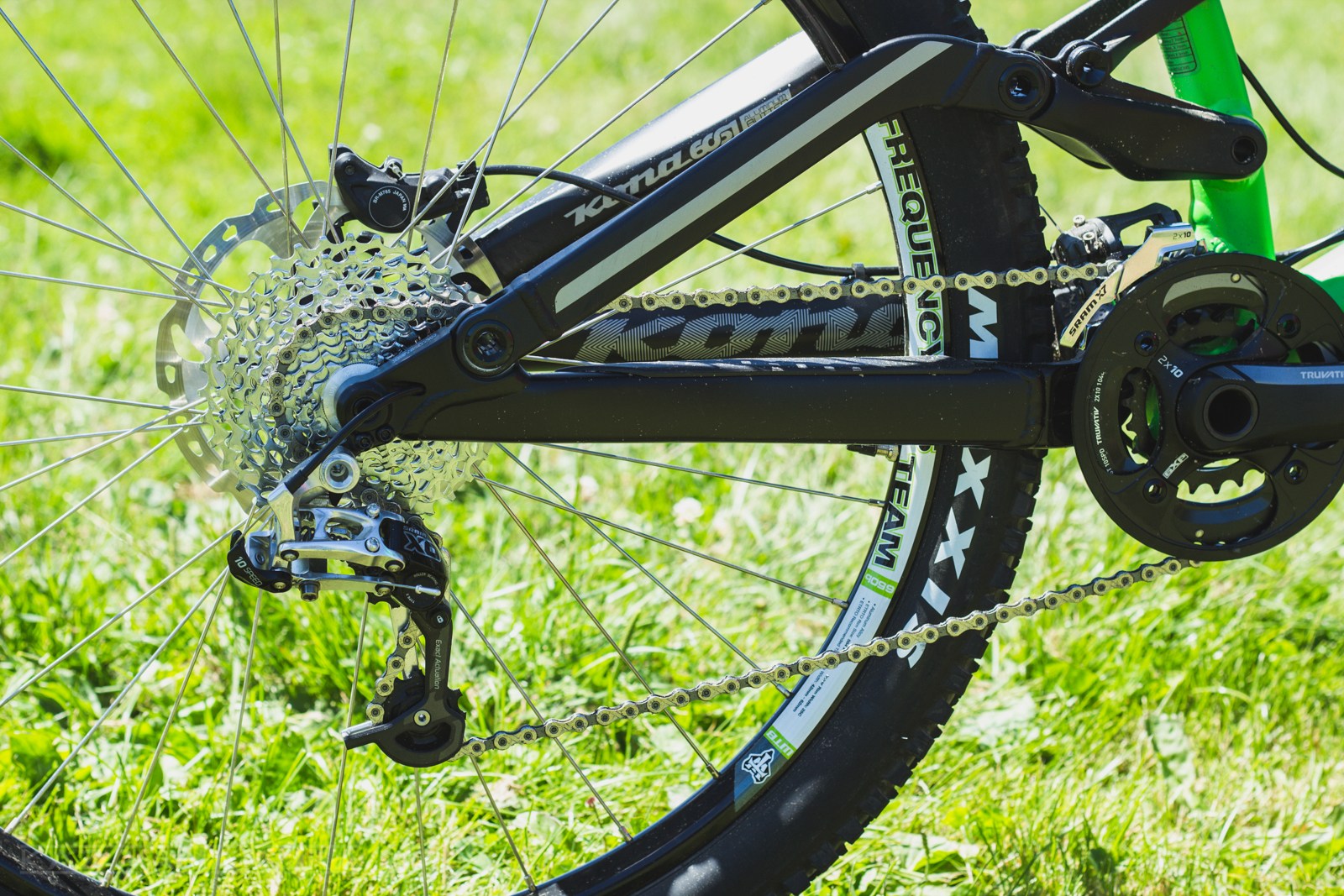 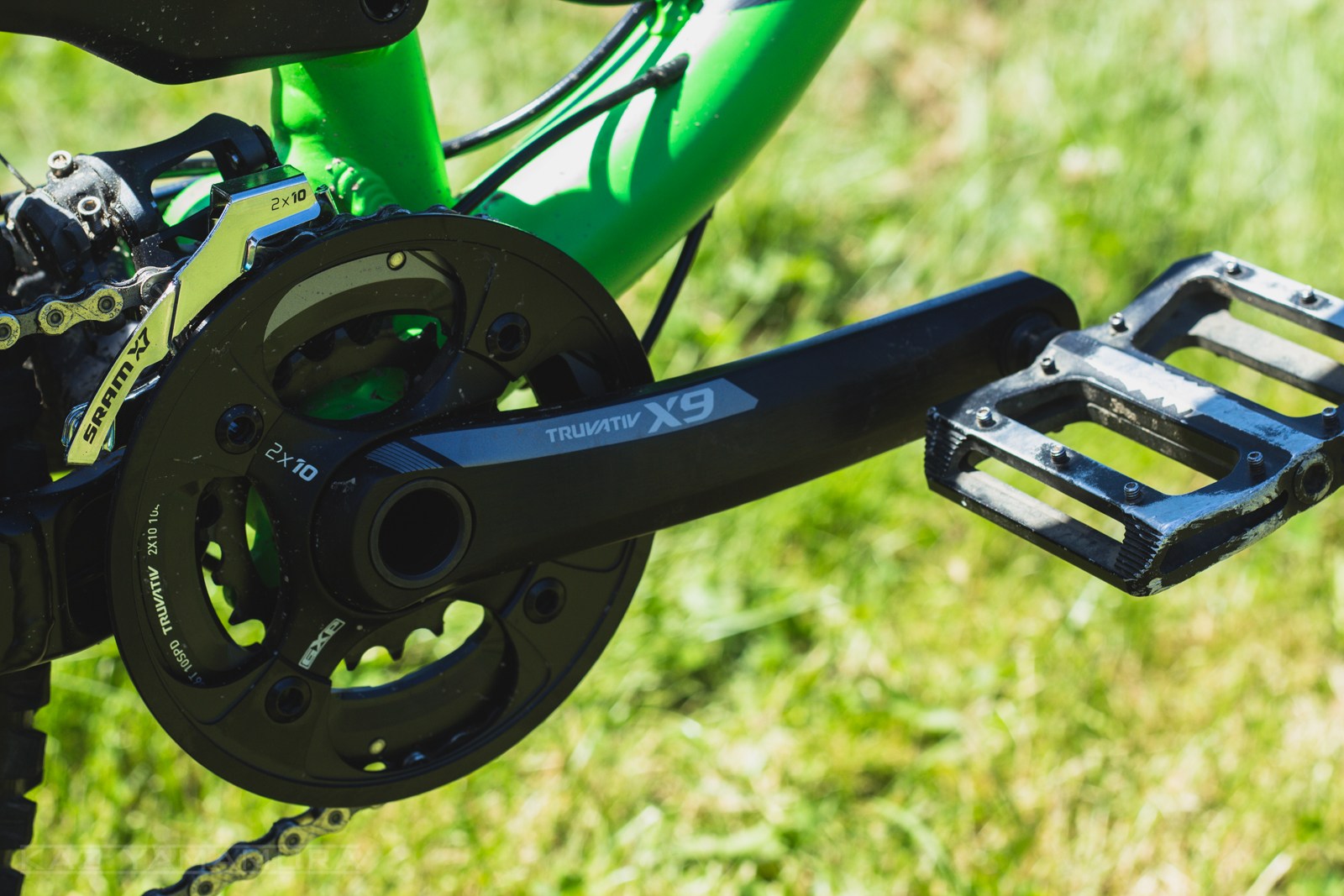 For me and those that are able to get their hands on the 2014 Process 153 DL, it really wouldn’t be that hard to mount a narrow wide ring and pull everything else off. The X9 cranks even accept a spiderless chainring to make things really fancy. 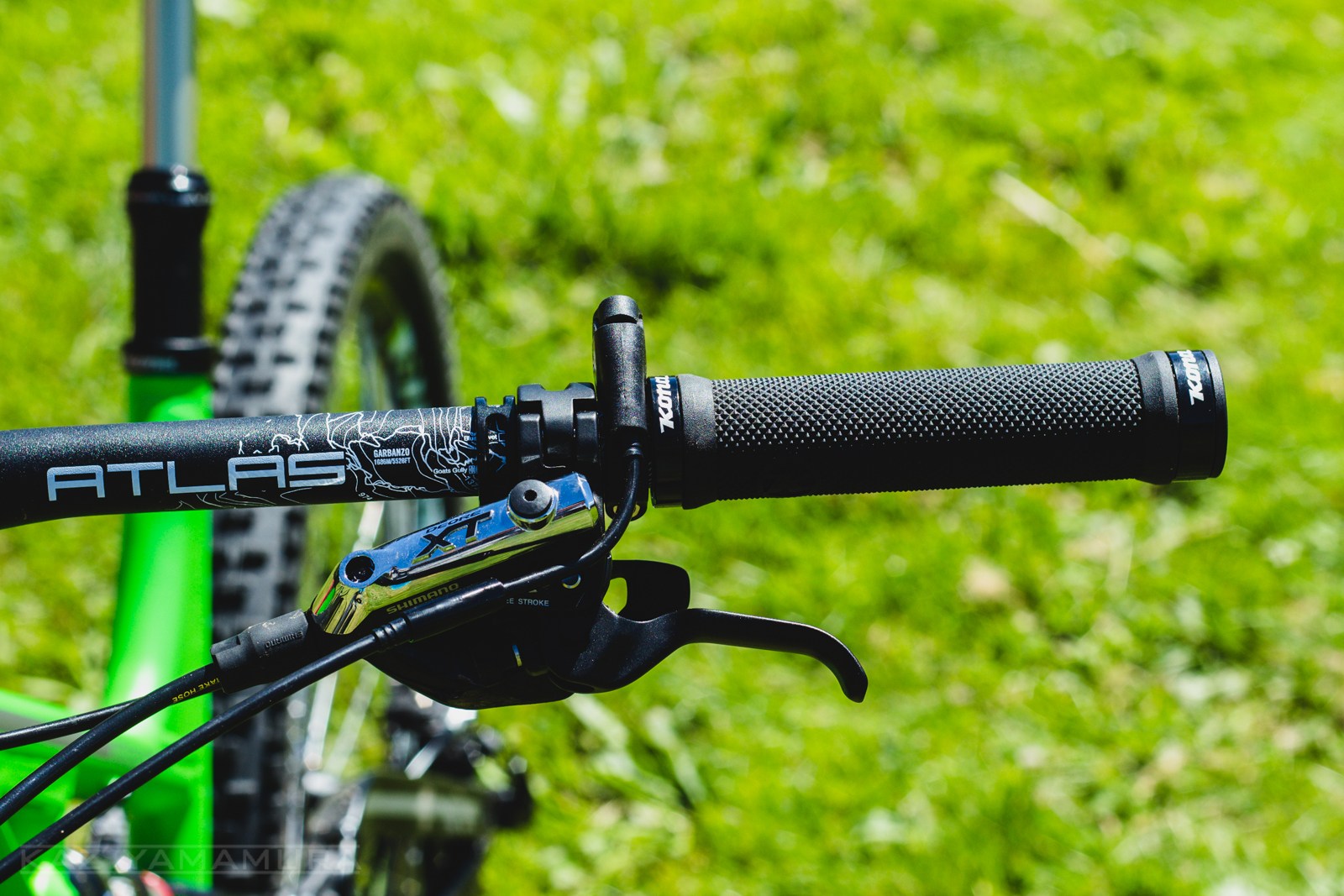 With SRAM only being spec’ed for the suspension and drivetrain, there’s no integration on the bar. Kona went for the best value to dollar when they spec’d this bike, and I haven’t felt the need to critique them for it. The KS Lev Integra uses a thin remote that has not prevented me from mounting the brake or shifter where I wanted. 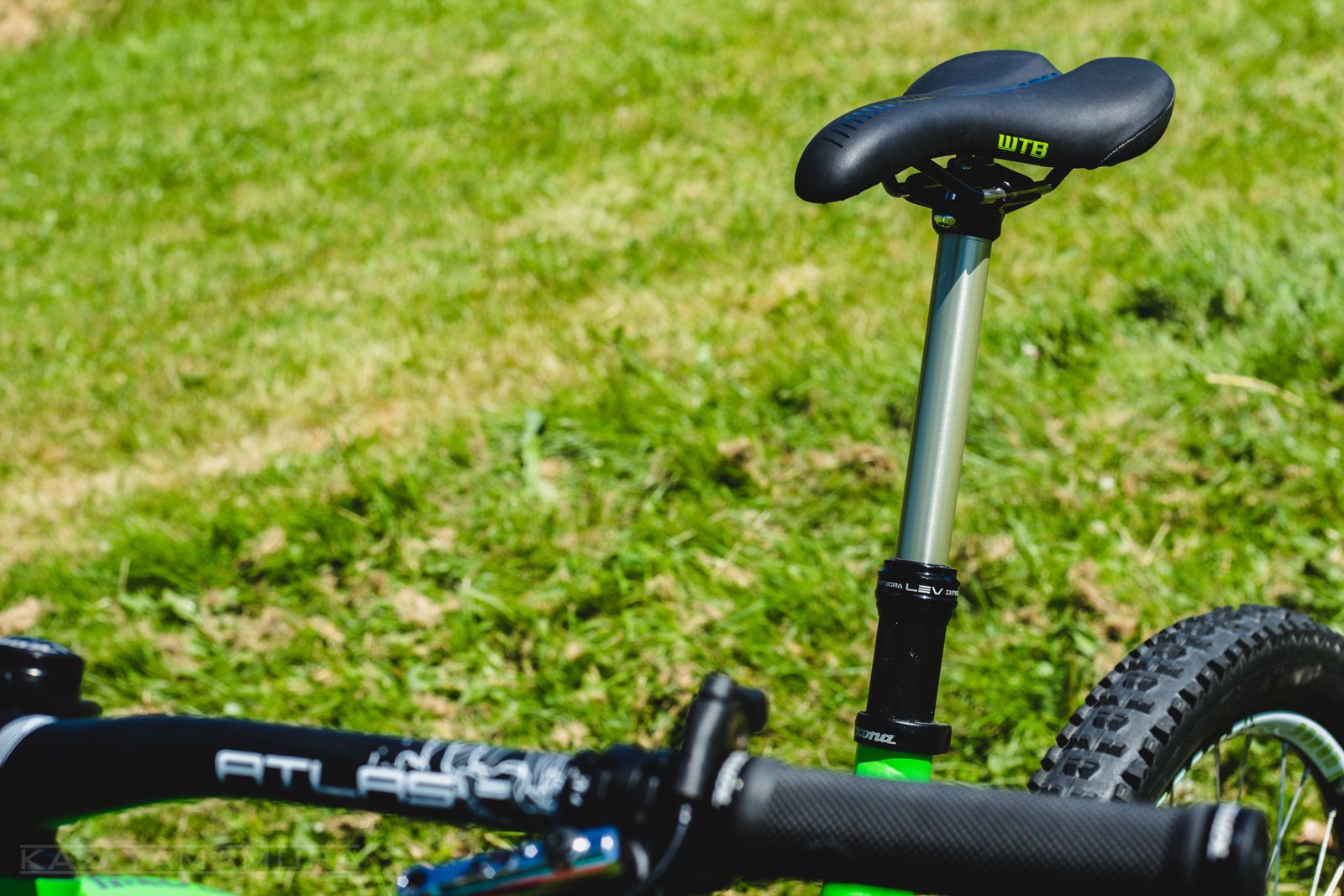 This KS Lev Interga post has 6” (152.4mm) of travel. Despite my usual tendency to slam the post as low as it can go, I have raised the post further out of the frame since these photos were taken for full leg extension. I was pleasantly surprised that the 6” drop is  adequate to get the seat out of my way on the descents. It should be noted that I do not get the post close to the minimum insertion point, but I have heard concerns from longer legged riders so it is something that potential buyers should check (preferably in a store or parking lot and not by looking at numbers). 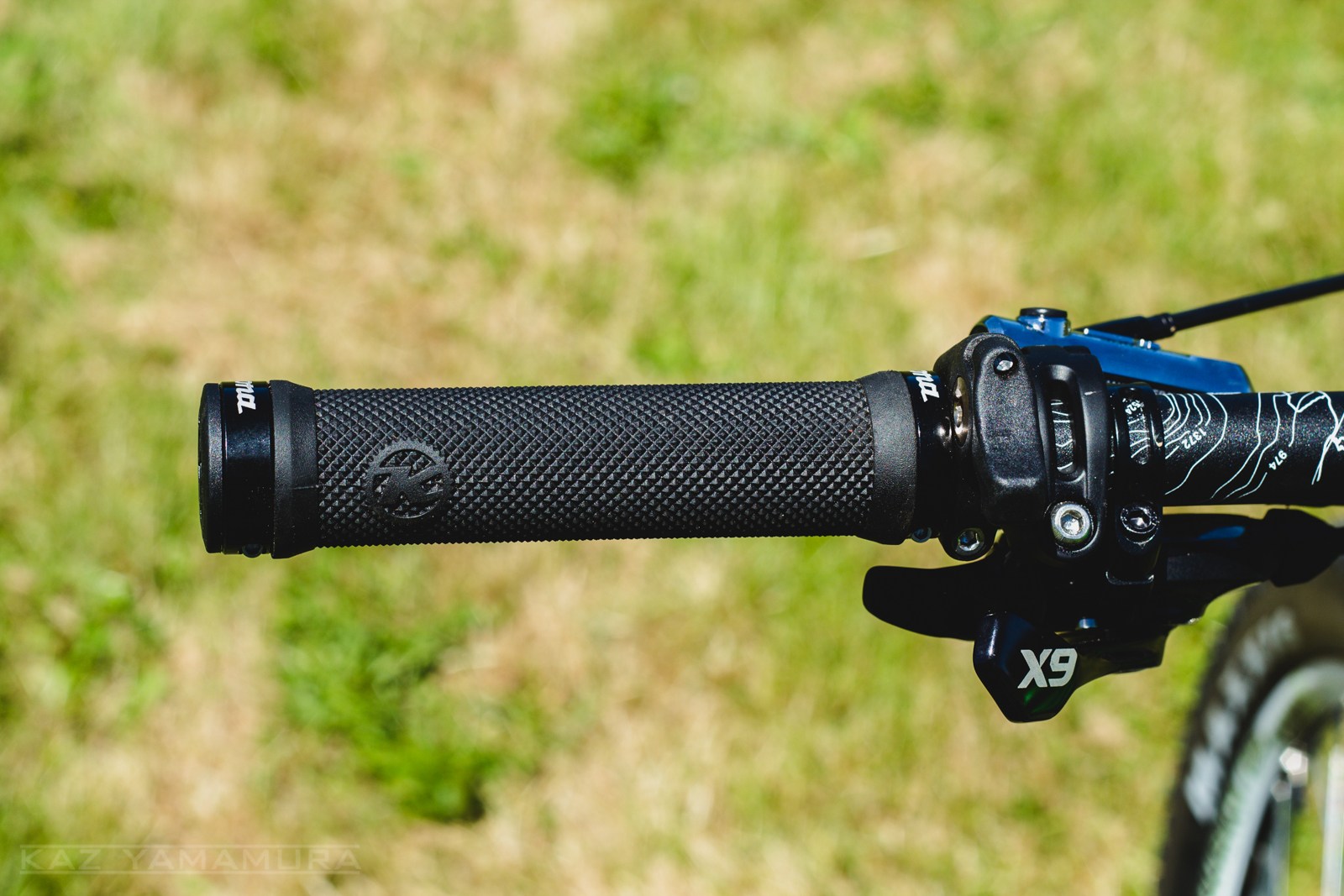 I find the thin KS Lev Integra lever quite ergonomically pleasing. I also like that it features a barrel adjuster. I likely could have used this feature to remedy my difficulty operating the post on day one. I ended up pulling the post out of the frame to see how everything worked, realised the cable likely did not have enough tension, then realised I had mangled the original cable and ended up replacing it. The post has been easy to operate since. 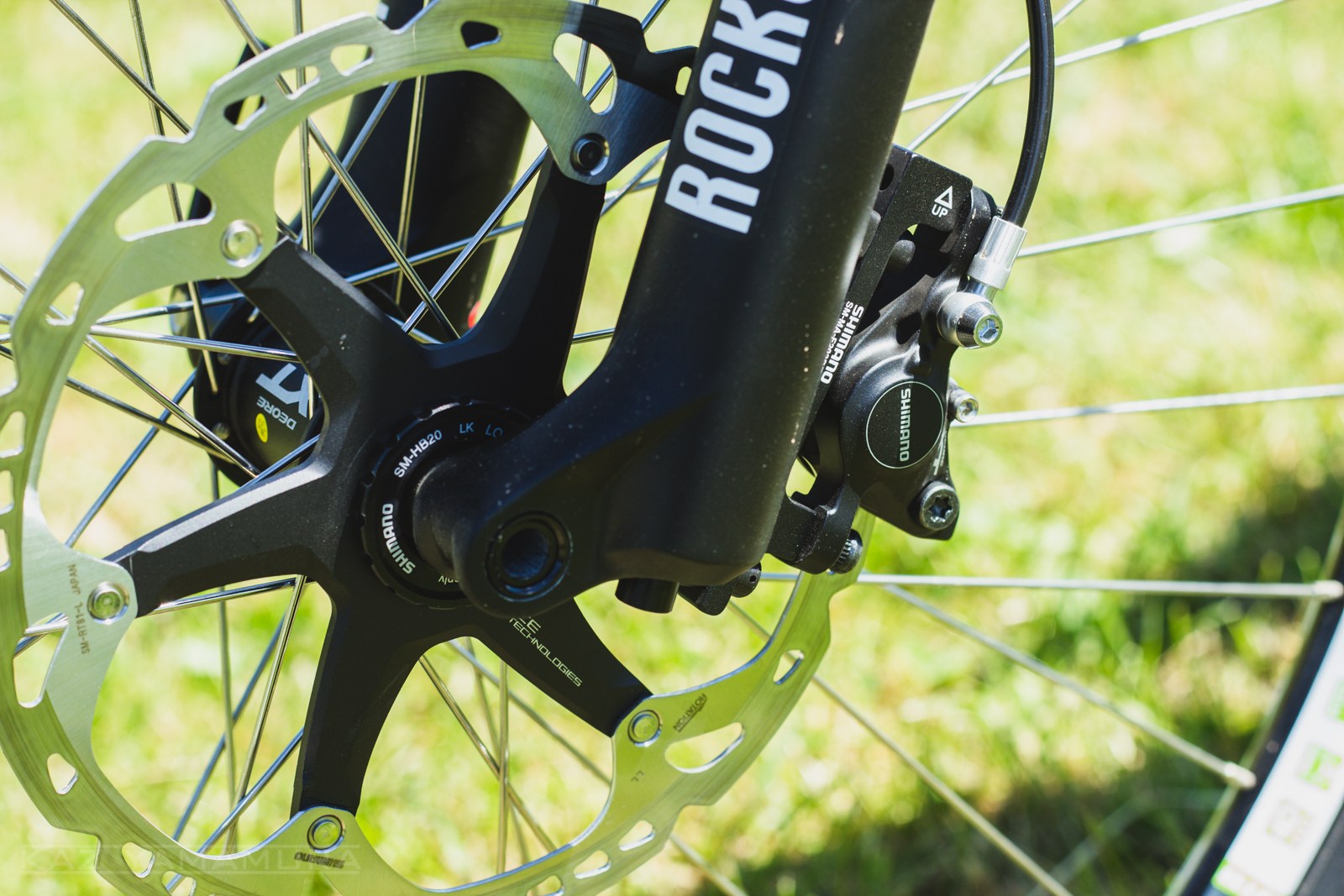 On to that other thing you saw on the bar: Shimano XT brakes. This is the second time I’ve come across these brakes on a test bike and I quite like them. They have provided more than enough power for my 74kg (164lbs) mass, the performance has been consistent, and the levers are easy to make comfortable. My test bike came with Shimano G01A Disc Brake Pads. Resin and non-finned, but they do not appear to be wearing quickly or causing me to suffer brake fade. 203mm and 180mm centerlock rotors mean I won’t be swapping out the rotors. 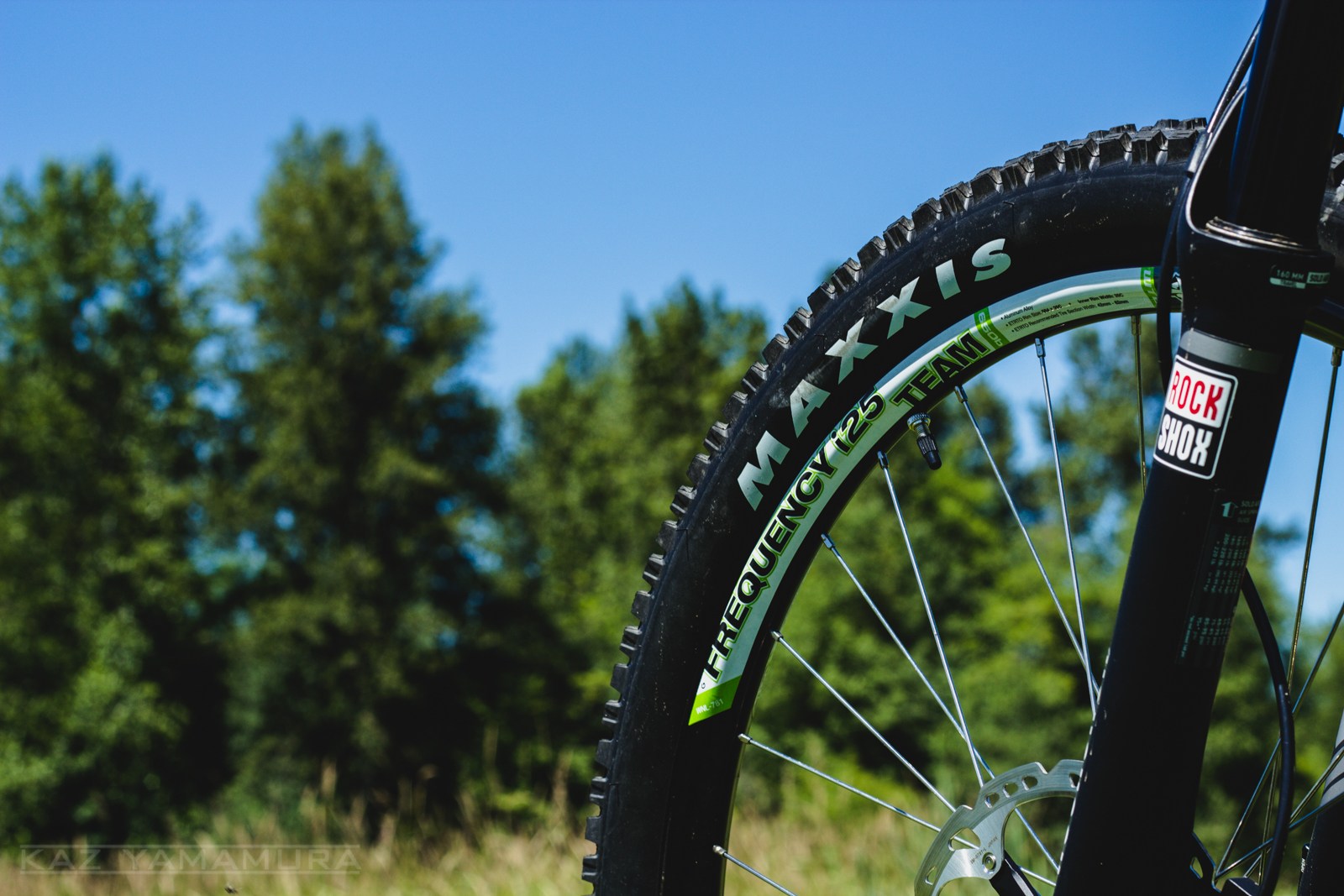 The Shimano XT hubs are laced to WTB Frequency Team i25 TCS rims. With a 25mm inner diameter, 32 holes, and 512g claimed weight, the rims are very comparable to the local aluminum favorite Stan’s ZTR Flow EX rims (actually, the WTB rims are claimed to be 18g lighter). Time will tell if they perform the same. My test bike showed up with WTB TCS Rim Tape already wrapped around the inside of the rim. Converting to tubeless was as easy as pulling the tubes out, installing valve cores, adding sealant, and inflating the tires. 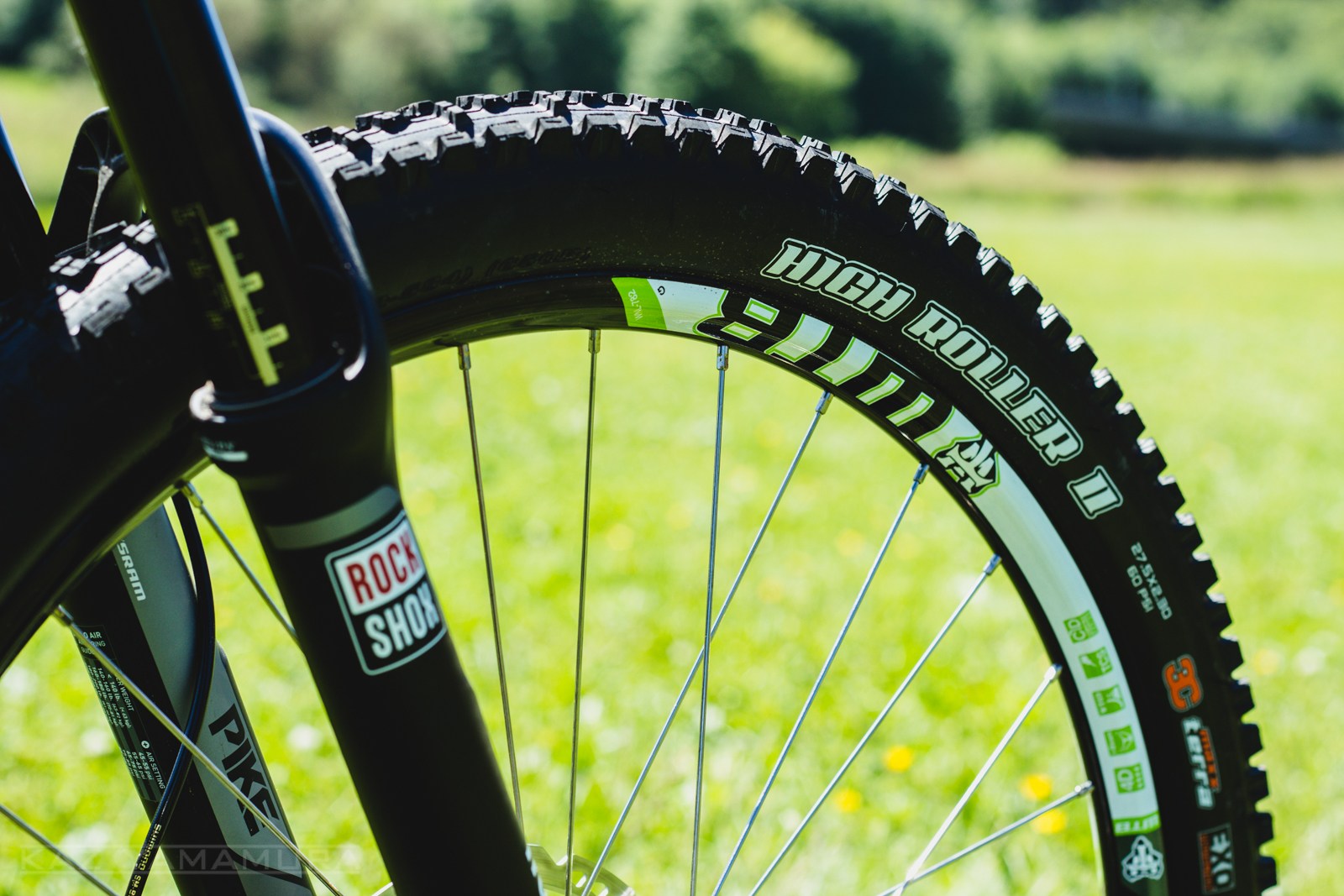 The tubeless ready Maxxis rubber you see wrapped around the rim is a High Roller II 27.5×2.3″ EXO 3C. Although Morgan warned me I might find them a little drifty and said as much in his review, I haven’t found them to be bad so far. I expect them to stay on the bike for the entire test period. The 2015 sees the Process 153 DL spec’d with Maxxis Minion DHF EXO 3C 27.5×2.3″ front and rear. 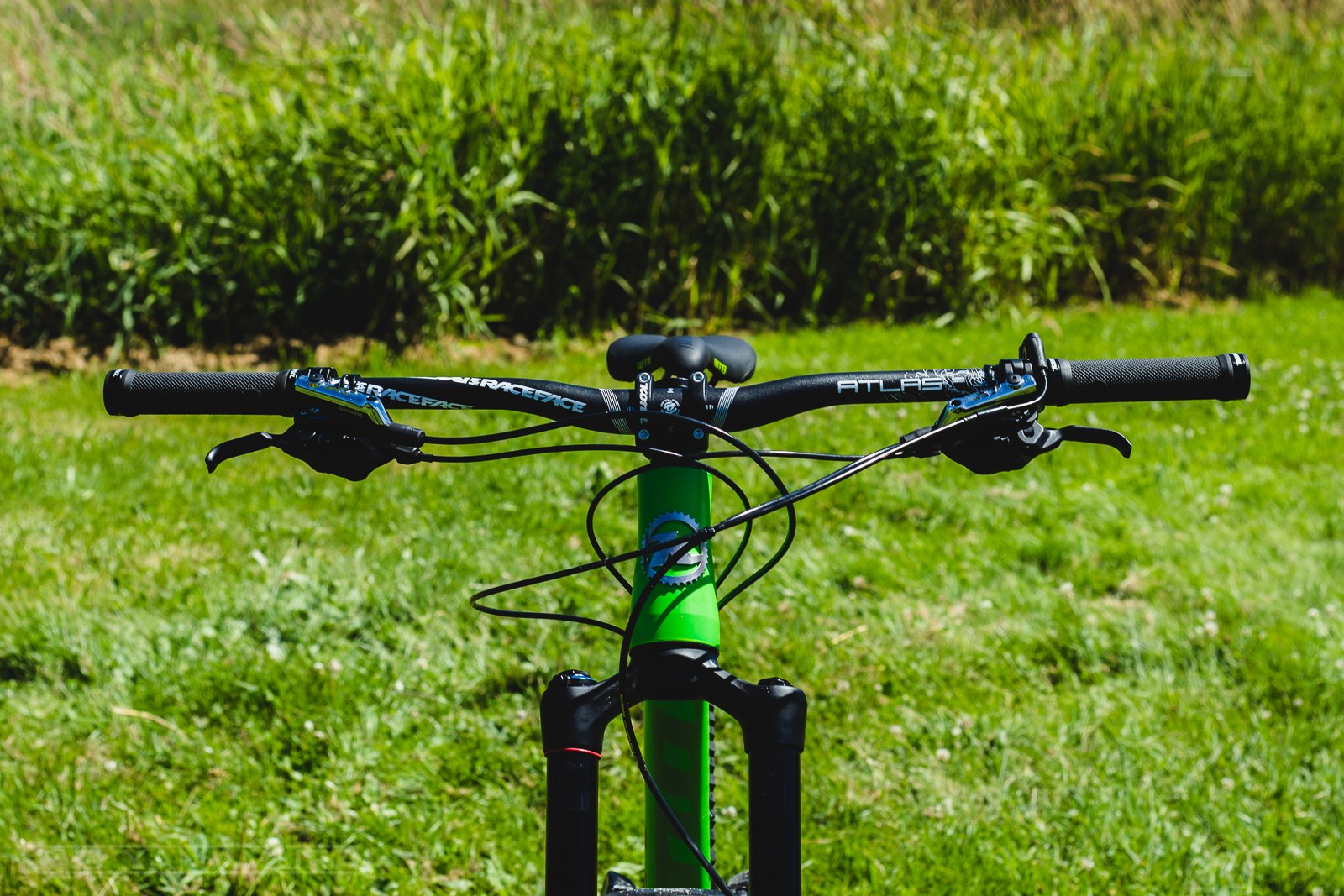 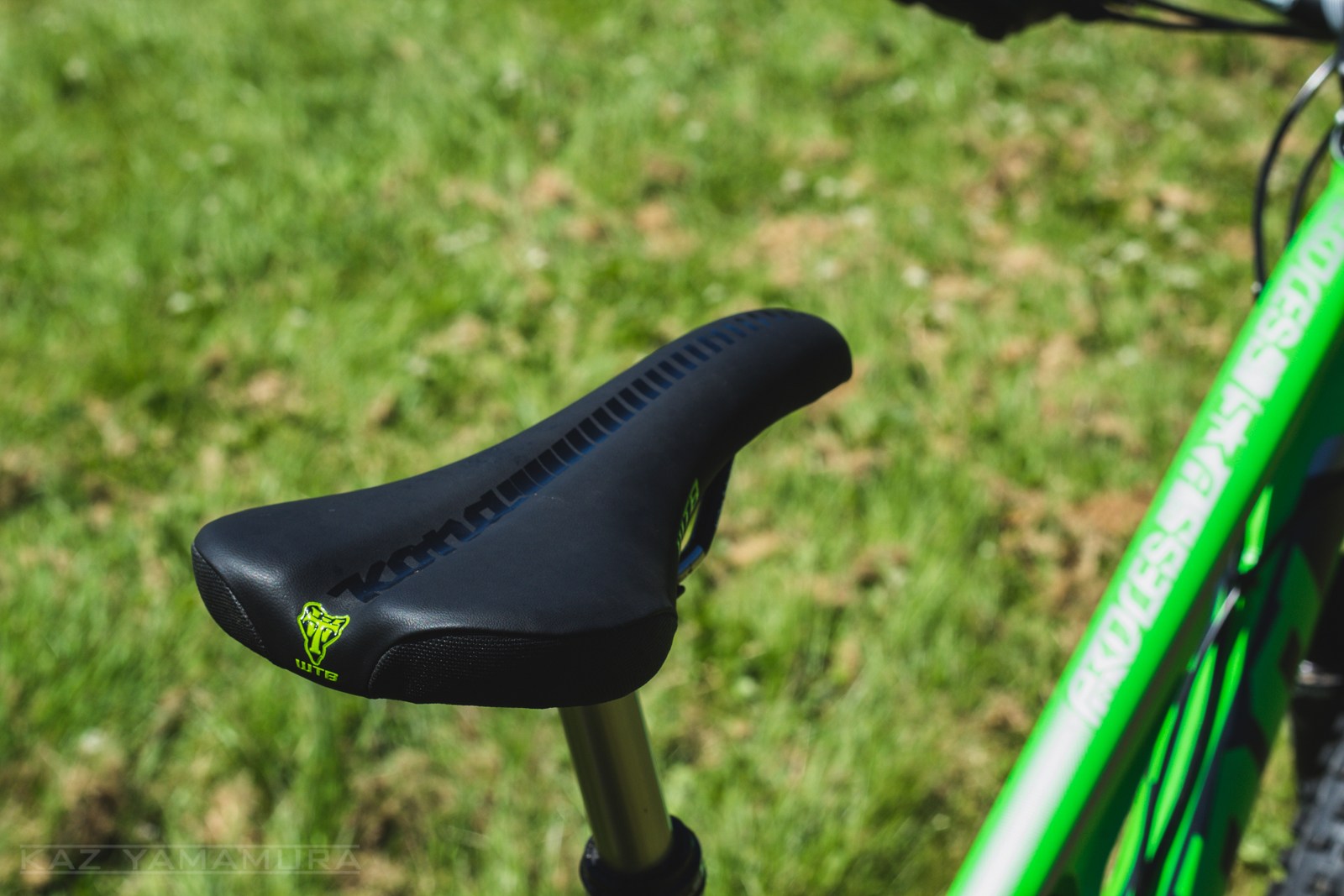 Last but not least, the saddle. Normally I don’t go into detail on the contact points as they come down to personal preference, but I’ve really been getting along with the ones on the Process 153 DL. The spec’d WTB Volt Team saddle created a very rare moment where I sat down on a bike and didn’t dislike the saddle. 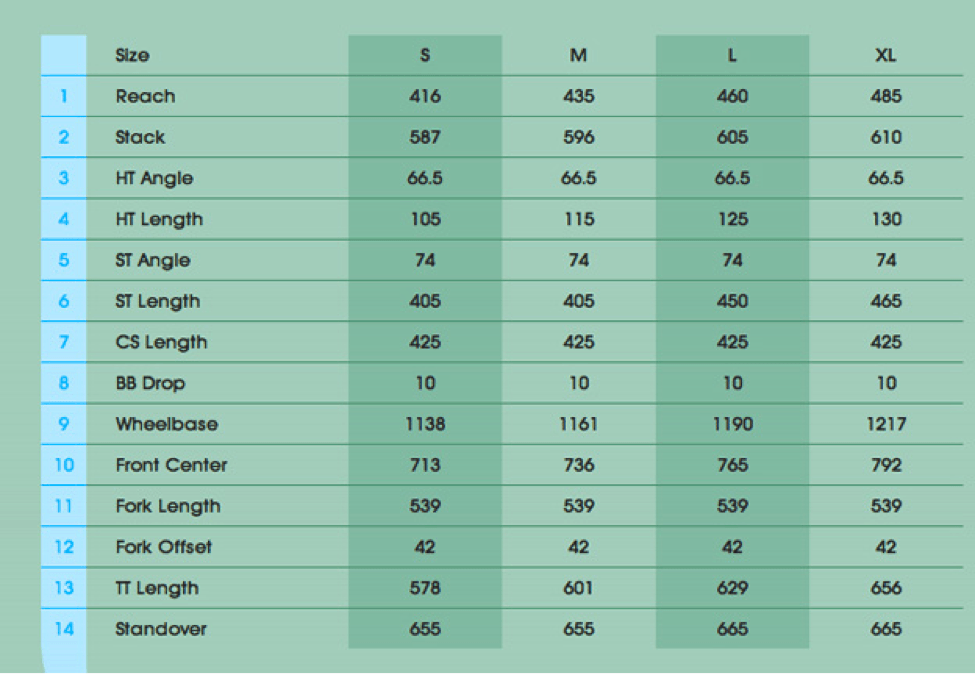 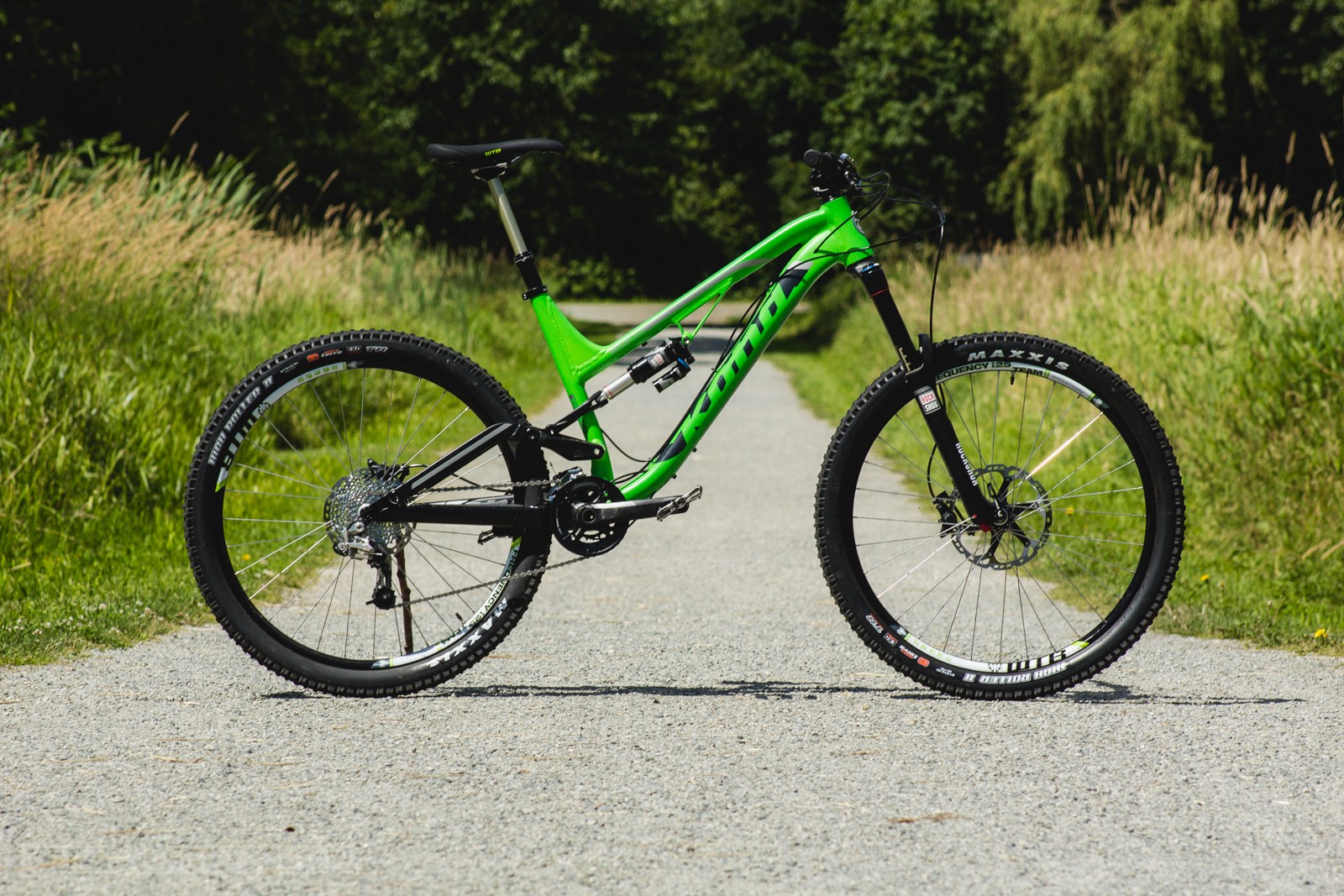 Is that a Large or Med frame?

Nsmb does too many overviews, and too little actual reviews. This bike is old news and we know what the parts do.

These bikes are awesome. But they have super short seat tubes and the KS posts have a really short usable length (thanks to the minimum insertion line being remarkably high up the post) so be sure to check!

I'm not sure what more to say on the seat tube. It's not a problem for me. I'm not close to the minimum insertion line. I actually like that it has a short seat tube because I like to run my saddle really low on descents. However, I have shorter legs relative to my torso. What works great for me may not work so well for others.

For fact purposes: I have two and a quarter inches (almost 60mm) remaining below where I have the post set in the large frame. I'm a hair over 6 feet tall (184cm) and run low profile flat pedals.
The 6″ KS Lev Integra post on my test bike has 4.4 inches (112mm) of post to play with between the min insertion line and the center collar.

It's not a critique of the bike, just something to be aware of though it will likely not be an issue for many people. I mean, why wouldn't you want more standover clearance?

Sorry, I assumed you were making fun of my caption in the article so my reply is slightly over defensive.

What's your inseam? I'm the same height (~182cm), but have an inseam of 34″ and sometimes struggle to achieve perfect leg extension.

I believe that I'm just a touch over 33″ for inseam.