Drooling is inevitable. The carbon-framed Mojo is one of the nicest looking trail bikes there is. All swoopy lines and gentle curves, it beckons you to saddle up. While they can’t identify Canada on a map, any America’s Next Top Model contestant will tell you that when you look better you feel better. And when you feel better you ride better. The 2014 Mojo HDR 650b will make anybody look fierce.

With 130mm of travel and a 67.1 degree head angle this Mojo sits comfortably in the trail category.  Or does it? When 26″ wheels inevitably come back in fashion you’ll be in good shape with this frame. The bike is convertible to 26″ with a dropout and shock swap and it morphs into a 160 mill machine.

If you’ve never ridden DW link, it may take some getting used to. Bikes designed around Dave Weagle’s flagship platform tend to sit higher in their travel than most designs and the feel isn’t as obviously active or plush, but you find yourself carrying ample speed, in control and without much fuss. I haven’t spent enough time on any DW Link bike to be a disciple, but maybe this is the one.

I only have a few rides on the bike thus far so I’m going to collect more info before I spill about the ride. For now here are some shots and details about the bike. 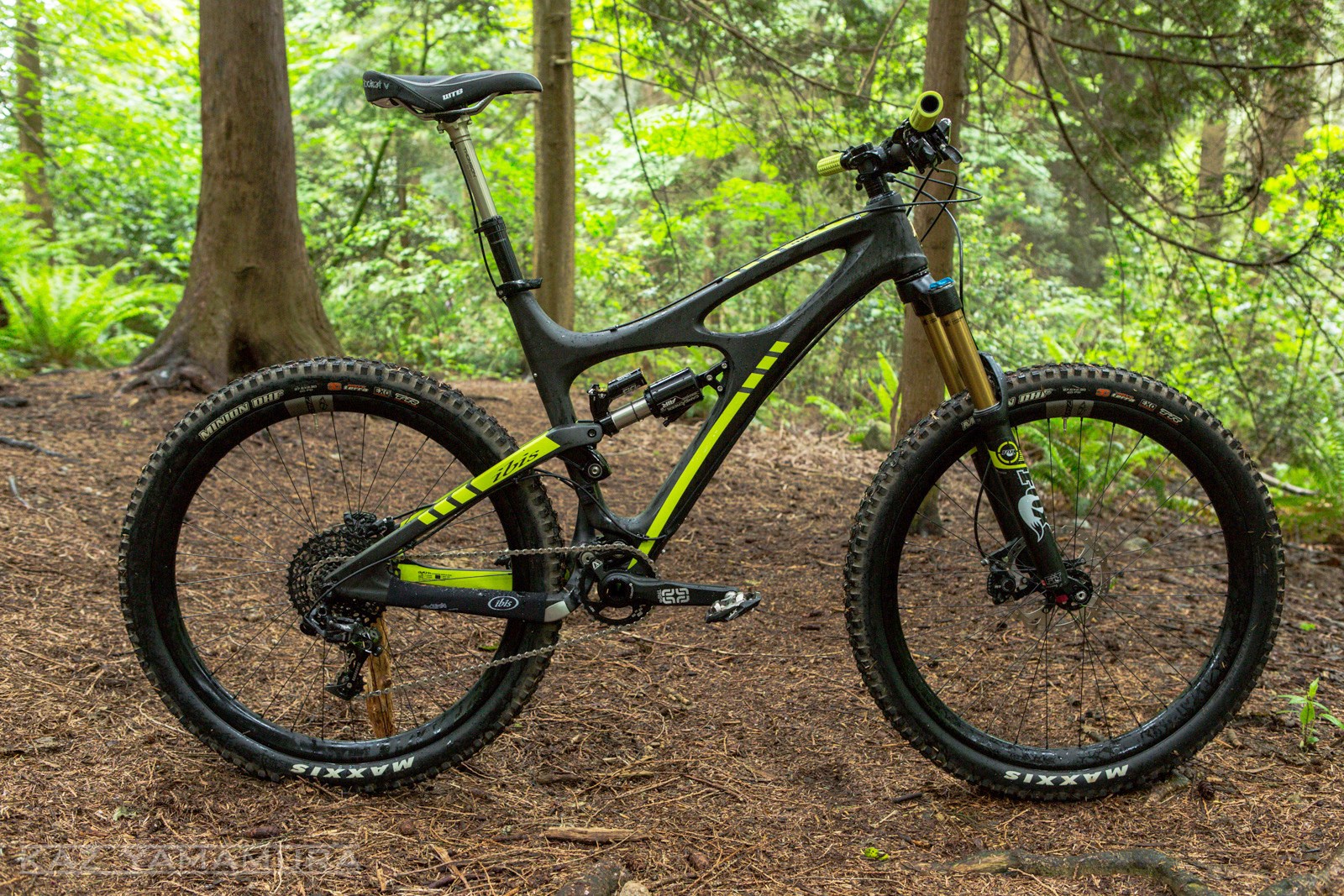 Gasp! This isn’t a 160mm 650b bike! The Mojo HDR 650 has 130mm of rear travel and this model is spec’ed with a 140mm Fox 34 CTD. Ibis tells us the HDR is made with a new layup process that allows for longer carbon fibres. Previously pieces of the frame were laid up and then attached once the layup was complete. Shorter fibres aren’t as strong and joints are heavy. As a result, Ibis tells us the bike is now just as stiff, stronger and half a pound lighter. 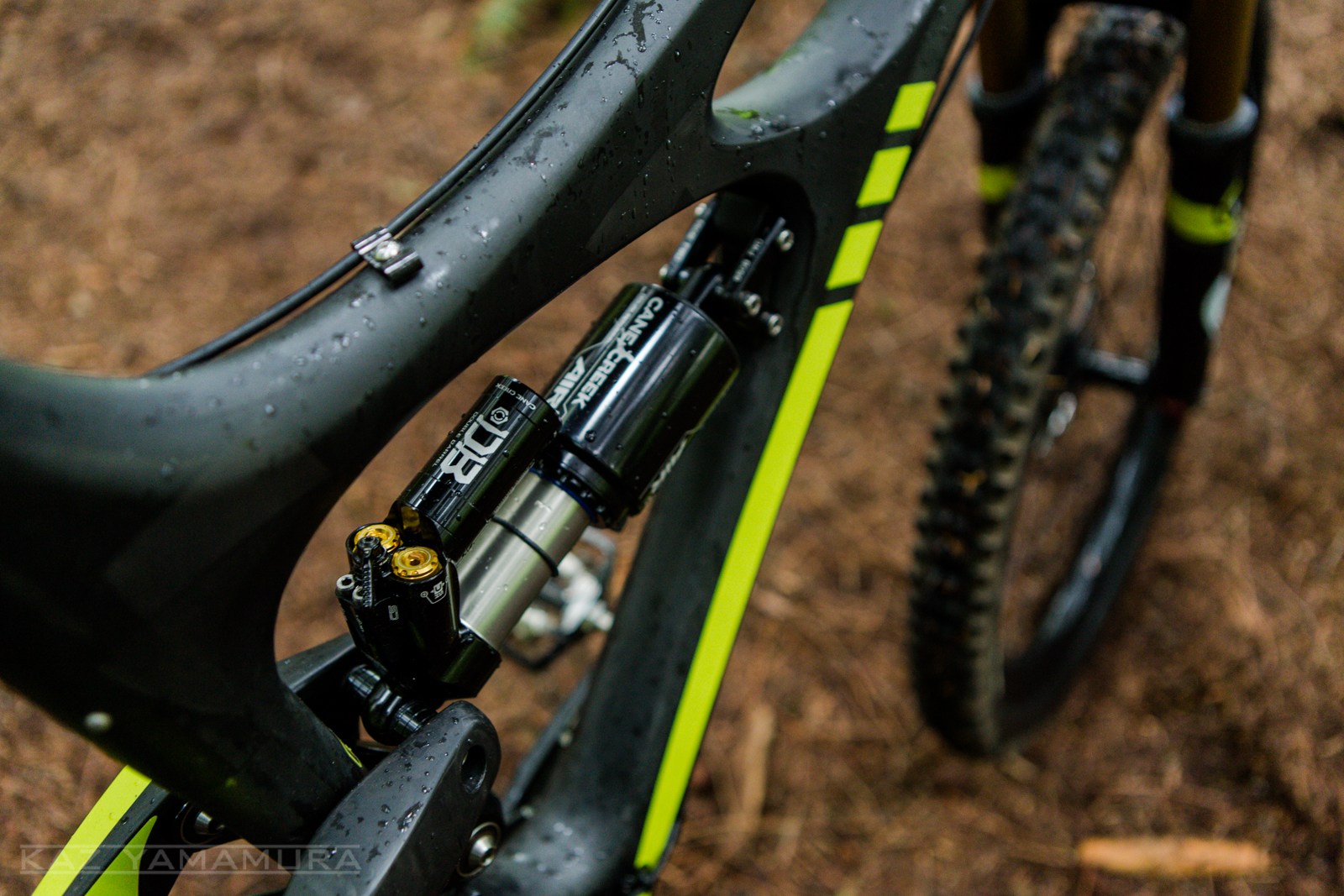 A Cane Creek Double Barrel controls the action of the Mojo’s 130mm DW link suspension. The dropper cable runs along the top tube, as would a front derailleur cable if you opt for a 2 by system. When everything else is so stunning this is a bit of a shame. 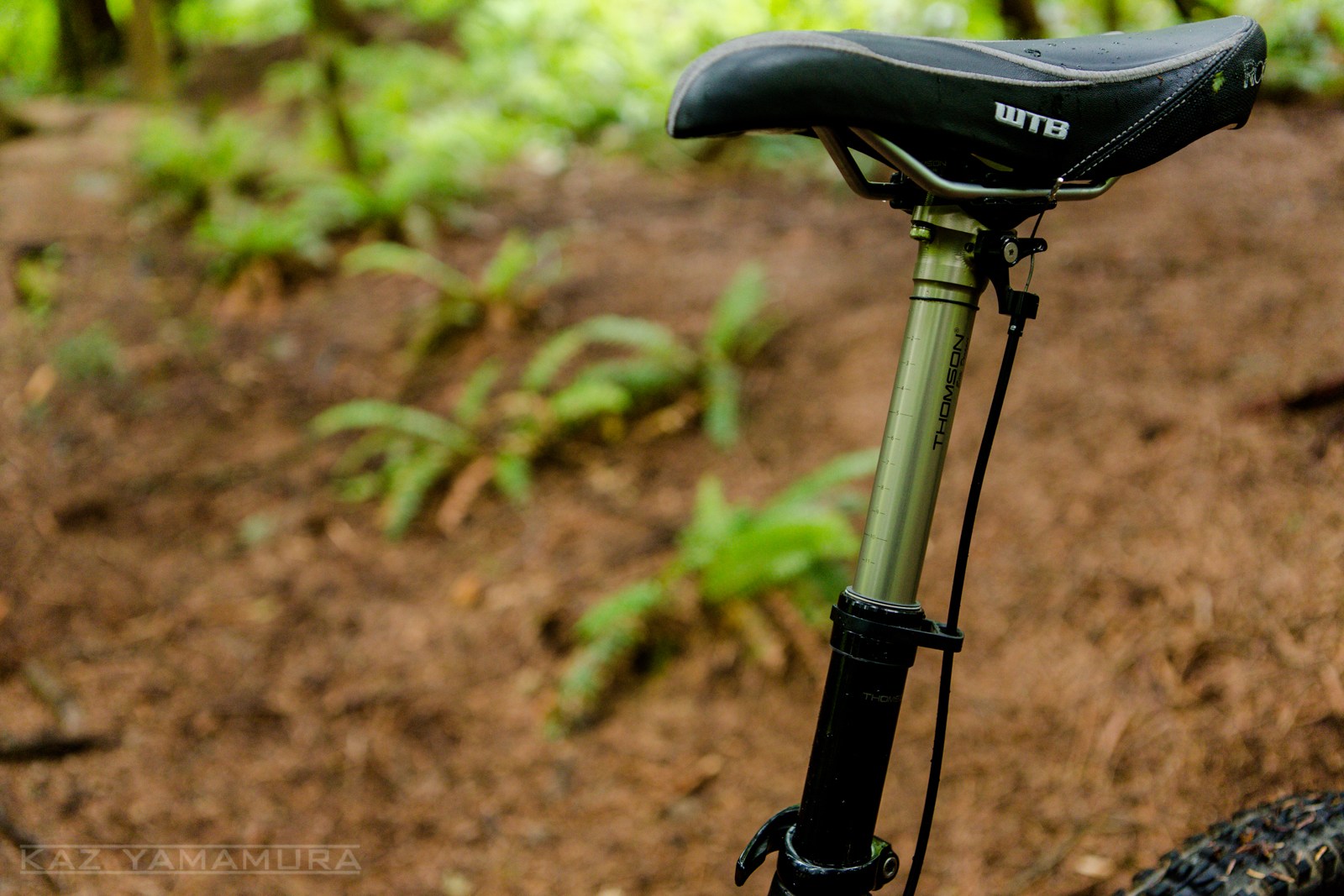 The Thomson dropper is a nice combination of hydraulic mechanism (infinitely adjustable) and cable activation. Normally Ibis specs the KS LEV post but they ran dry. I’ve always been a fan of WTB saddles and this one is light and comfy as expected. 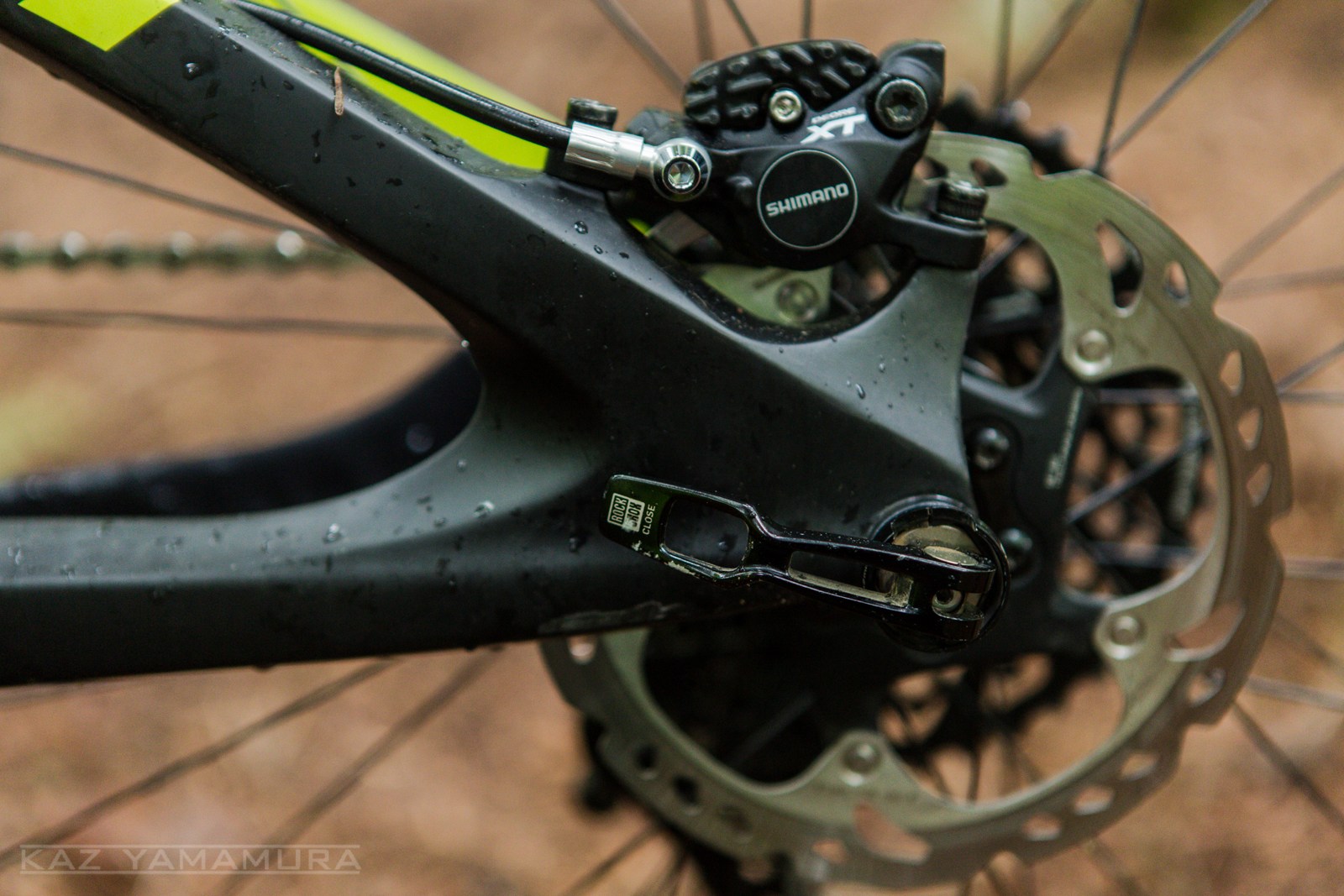 Shimano XT trail brakes – just in case you’d like to slow down. 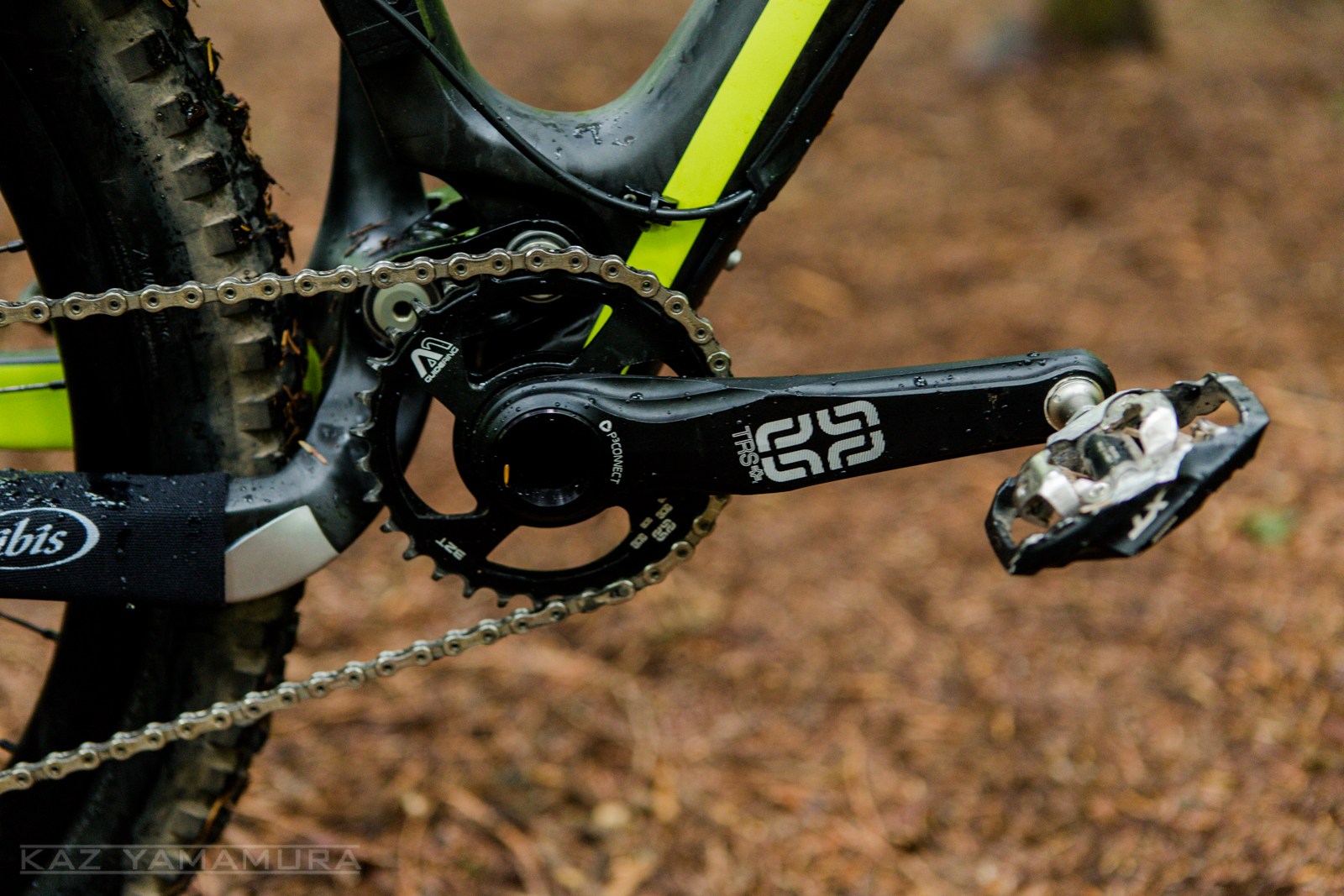 This trim level ships with E13 TRS cranks and a 32 tooth ring to complete the 1 by 11. New for 2014 is an ICSG05 mount for chain device fans. This was accomplished by moving the lower link 2mm to the non-drive side. 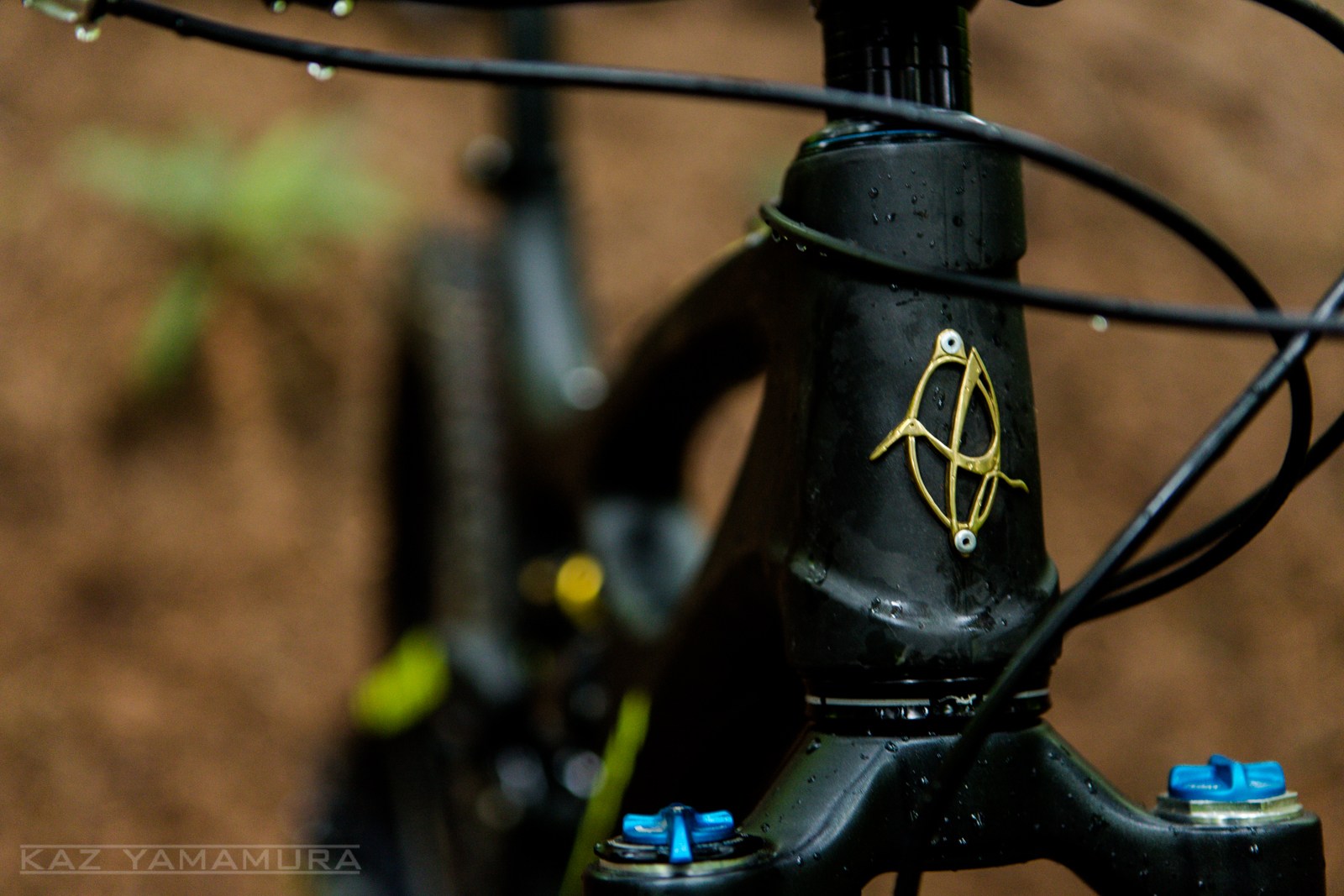 WTF is an Ibis? According to Wikipedia: The ibises (collective plural ibis; classical plurals ibides and ibes) are a group of long-legged wading birds in the family Threskiornithidae. She’s a beaut from every angle. 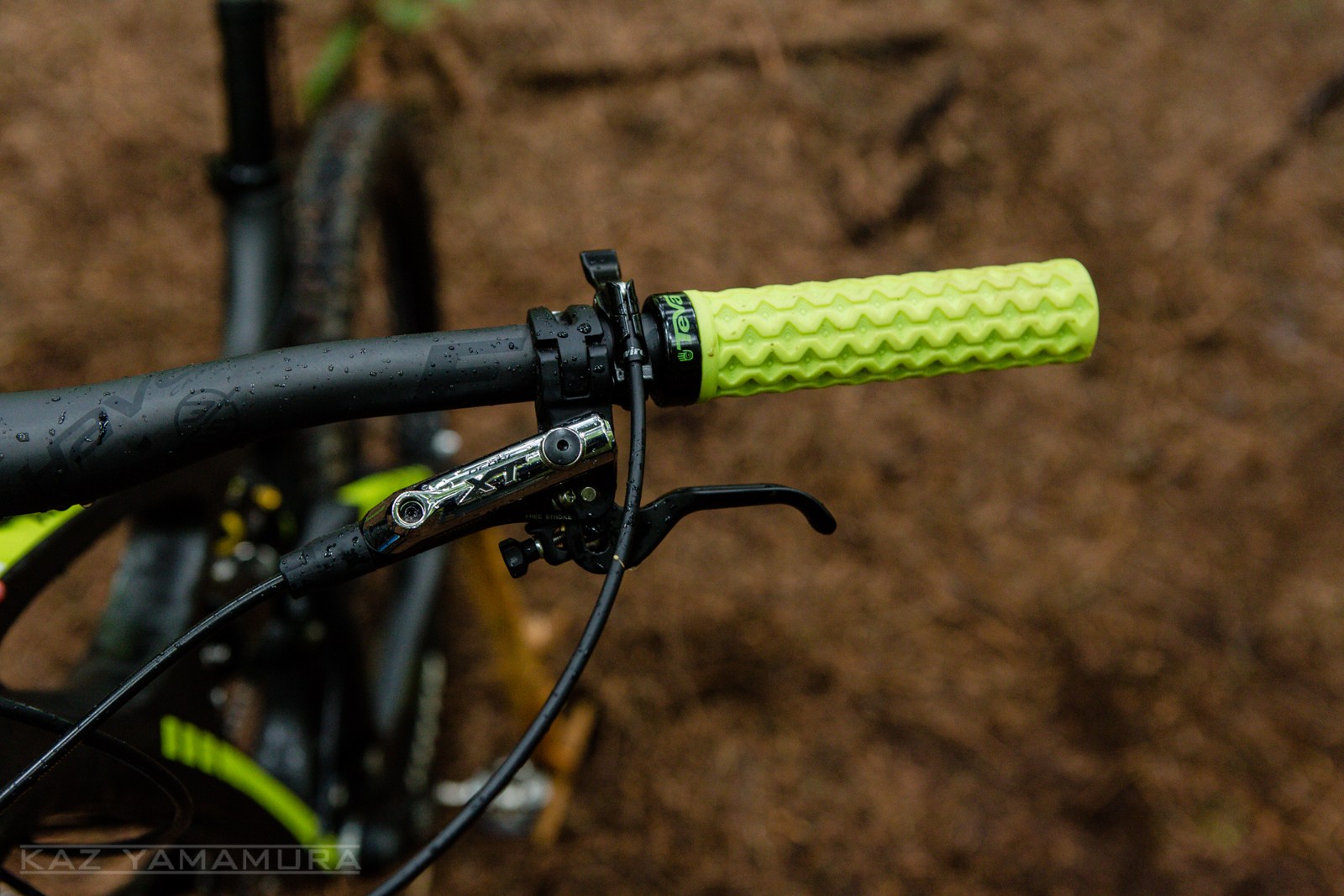 I just happened to have these Teva (RIP) grips around and I couldn’t resist. The lever for the Thomson Dropper post can be seen just left of the grip and it’s a tidy and functional mechanism. So far the post has been very good. 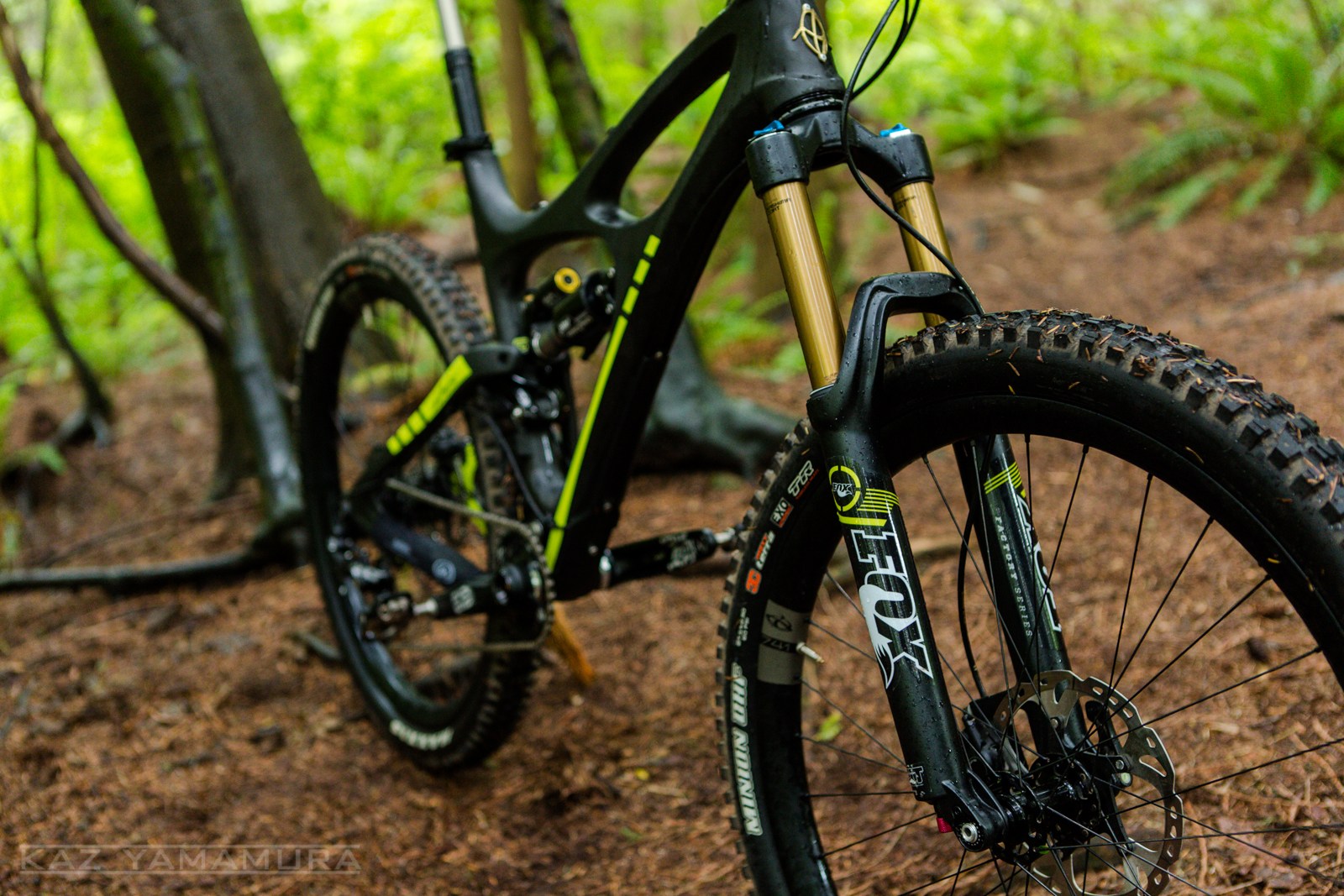 Nice colour coordination with the fork and splashes of neon keep the bike from being too stealthy. Why fly under the radar when your frame looks this good? 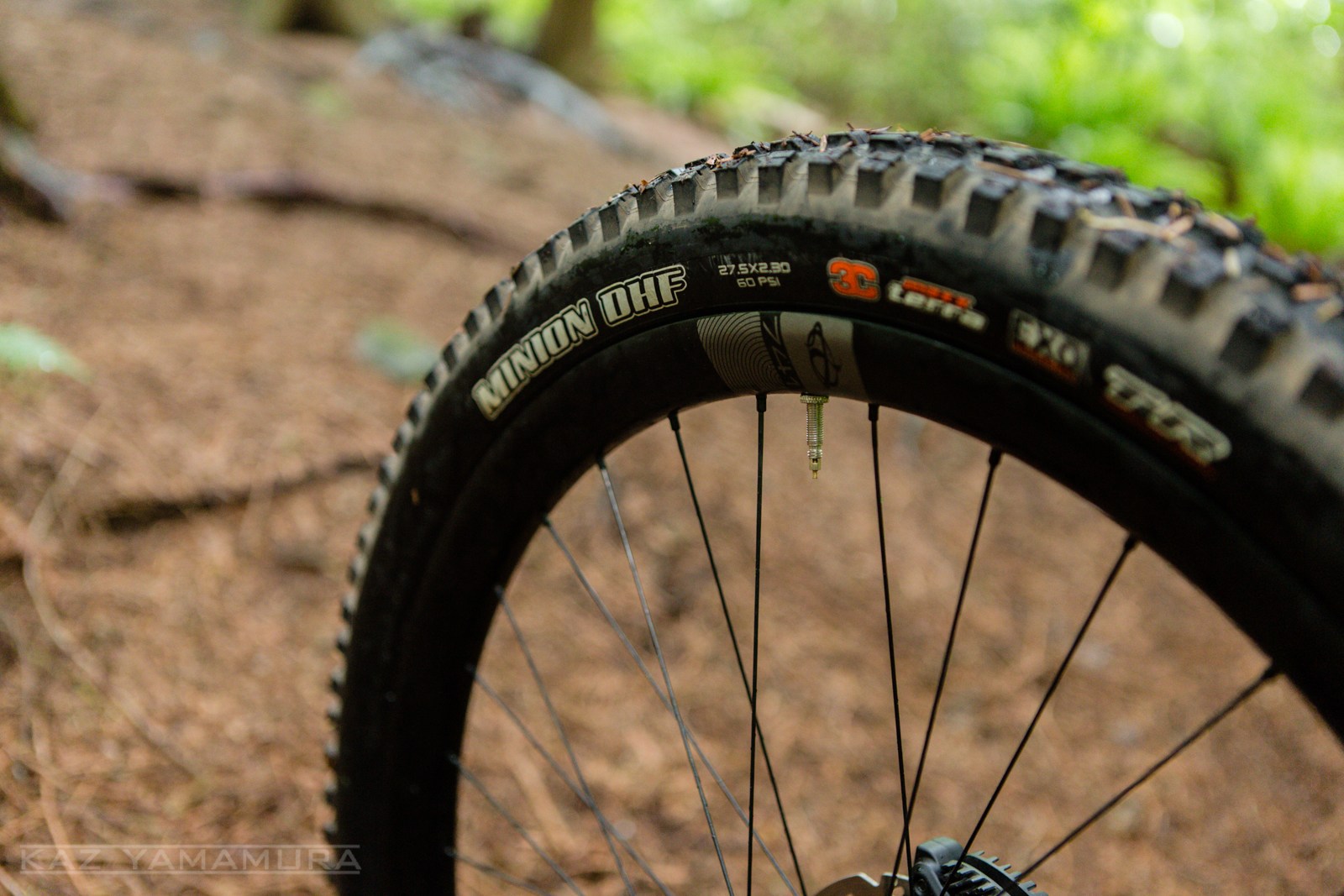 The new Ibis wide carbon rims are an upgrade – but compared to others they present excellent value. Jon Harris rode these just before Sea Otter and came away grinning. He probably wanted to call them a game changer but we wouldn’t let him. Check out what he had to say here. They add meat to an already beefy set of tires and allow you to run extremely low pressures. With these rims these Maxxis DHF 2.3 650b tires measure even larger than 27.5″. And they make the bike look burly despite a weight of only 1650 grams for the pair. 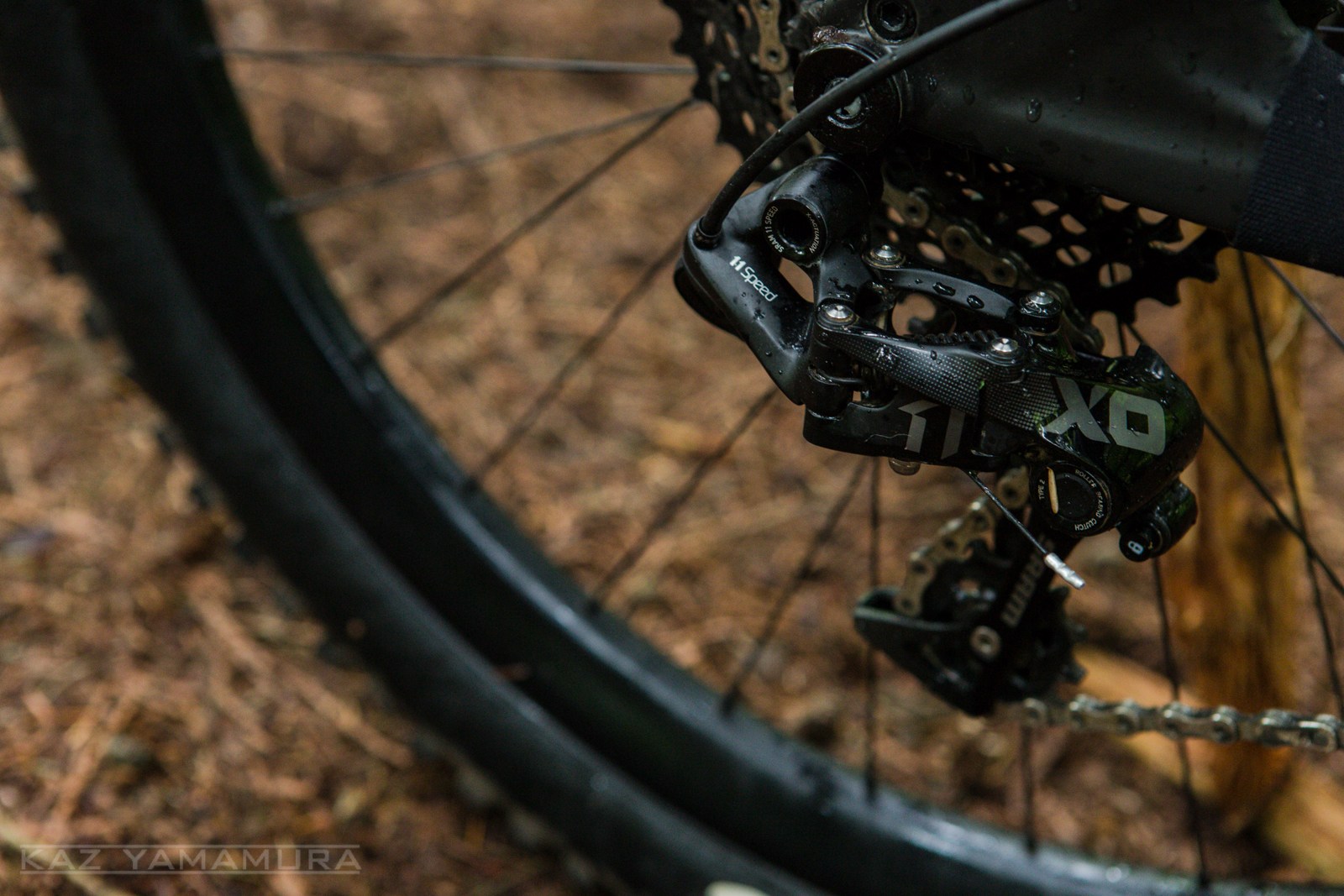 A half step down from XX1, this spec has an XO1 rear changer and shifter but after the chain and the 11 spd cassette that’s the last of the SRAM. 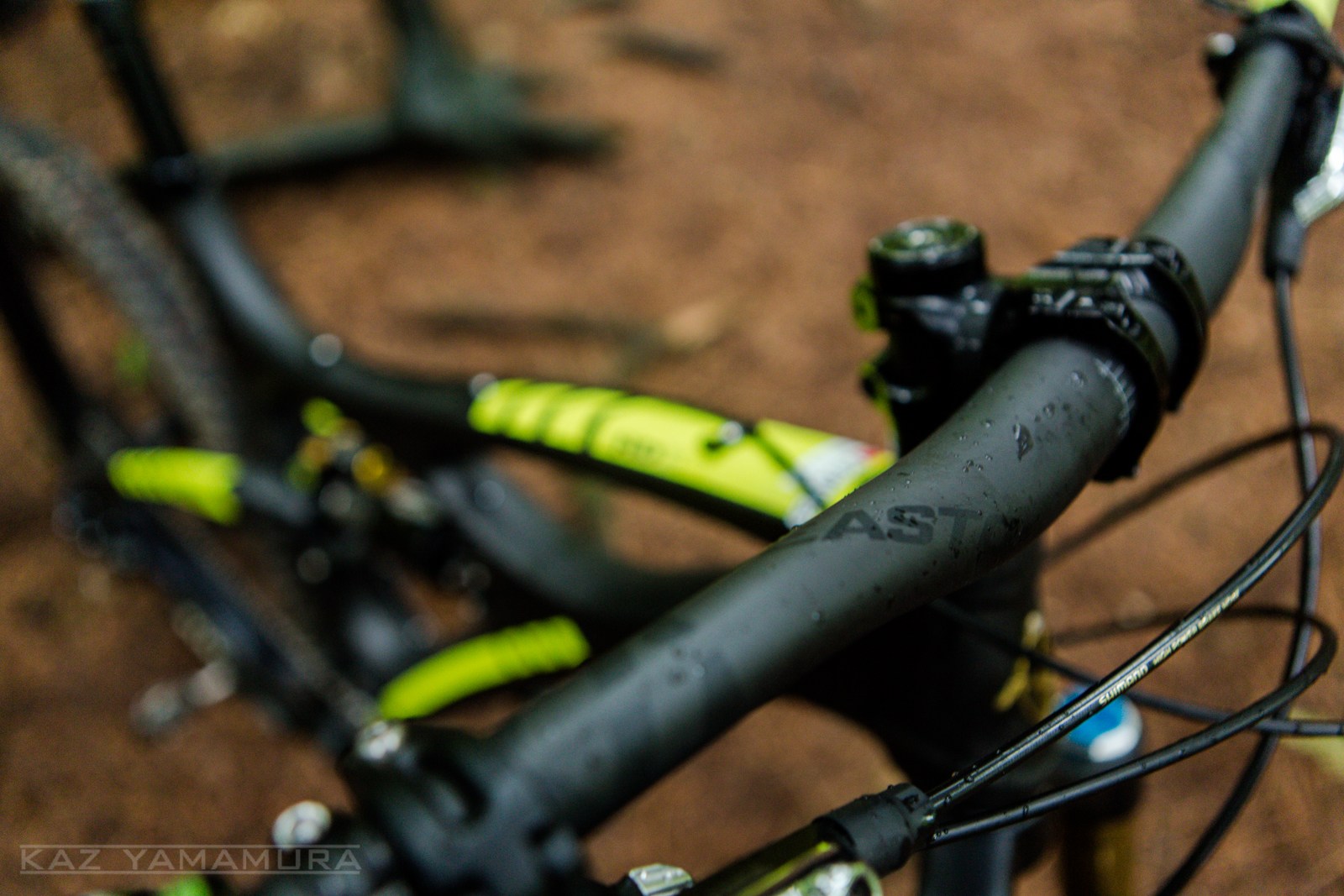 The stock Ibis-branded bar and stem were too short and long for me respectively, so I slapped on an Easton Haven 35mm stem (50mm long) and 750mm Haven carbon bar.

Stay tuned for the ride review after I spend some time on the dirt.

Is this the 650b bike you’ve been looking for?

I've owned the HD 140 for 2 seasons and it's awesome. I am seriously considering selling to buy the HD-R version so any comparison's you can give to last seasons HD would be awesome.

I think you need a compare and contrast review section to the Mojo HD 160mm/26er. Oh hey, I have one of those! 🙂

I have always loved the ibis bikes. They are beautiful but a few things kinda ruin them for me. The cage mount is useless unless you like mud and dust covered water bottles and on the all around looks side of things.. Route that dropper hose internally.

The way that saddle is way up makes the sizing look too small for the rider. I used to think getting a smaller bike was better. Stiffer, snappier handling but now I think it is worse. With a short stem it is too cramped to climb especially if it is technical and when you descend the rider is too far back.

Cam's got long legs relative to his height, so it's tough to judge unless you see him on the bike. Agreed, though - too short for the TT does cause problems.

These bikes run way small. I just rented one for 4 days and took to an xl. I'm 6'1 and it felt very comfortable. Not souper roomy but the bike is so well mannered if you fit at all it will reward you. 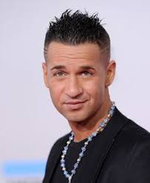 It'd be great to hear Cam's opinion on the shorter reach geo vs his experience on other bikes with the newer trend of longer reach/front center. I'm a HD (26) owner and I really like it, but always see (mainly internet ;)) complaints about how the reach it too short.

I'm just finishing up my full review now but as Pete said, my peculiarities mean high saddle and shorter cockpit is usually good. That said I did find this a little cramped initially but I've gotten used to it without complaint. I was thinking of putting on a longer stem but I've since decided against it. In the end I think this is the right size for me. In a perfect world a custom HDR with a slightly longer TT might be the ticket

Cool - thanks. I'm thinking the new 160mm bike they're putting out might be that (same style with longer TT). Looking forward to the review

That is a beauty. I would put something lighter on for the rear wheel. It would be better for us white hairs climbing around home.

A twenty six would be lighter too. I know the wheels only come in 650.
Also a 1.5 inch rise in the handle bar would look better IMHO. Everything else is near perfect. Lev of course.

so you would rather be in a non optimal riding position based on looks alone? I personally think high risers look silly.

your words were "look better" not optimal position and that is a totally subjective statement as I stated. And
how do you know 1.5″ riser bars are optimal? It would depend on the rider and the bike and in combination.

And how much you cut off the steer tube, Don't forget color.