News of Giant’s wholehearted jump into the 650b (27.5) wheel size movement earlier in 2013 took many people by surprise. While most brands were dabbling with a model or two in their lineups, Giant  announced a full range of the mid-sized wheeled bikes, across nearly their entire lineup. While a number of 29” wheeled bikes remained, all 26” wheeled bikes, save for the downhill Glory and freeride ReignX, went out the door.

After spending 2 seasons on Giant’s stalwart Reign, I was curious about how their  commitment to the mid size would pan out, and was more than happy to answer the call of the test bike. With its low-key all black style, aesthetics alone push the carbon-framed Trance Advanced SX toward the front of the class. Giant has a proven formula of smartly spec’d bikes at the right price points, and when combined with second-to-none warranty service they are hard to overlook. 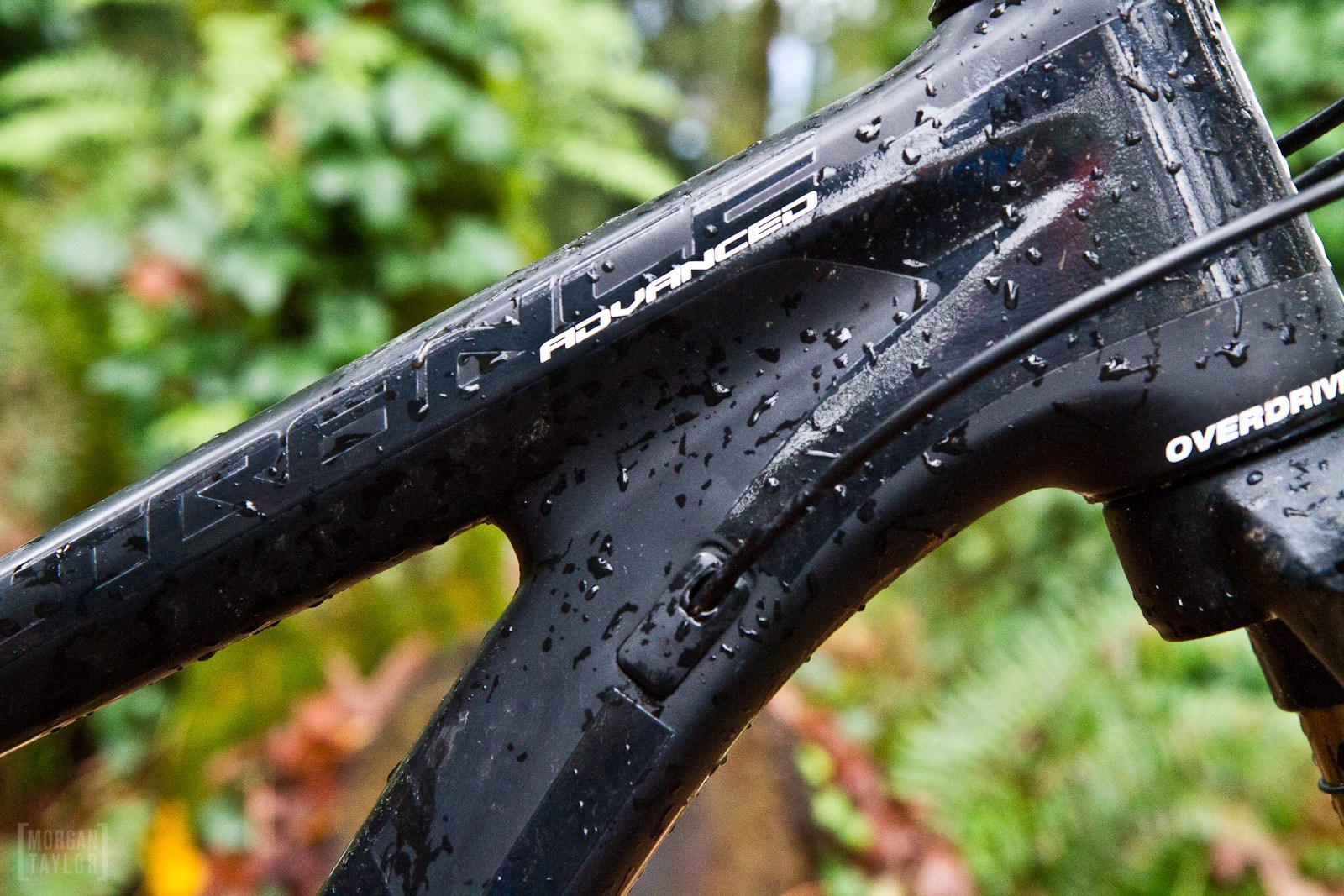 Black on black labeling and internally routed cables contribute to the bike’s sleek aesthetic. The OverDrive2 headtube is proprietary and beefed up compared to other brands, Giant claims a 15% increase in torsional steering stiffness, although I’m not sure I really notice a difference. 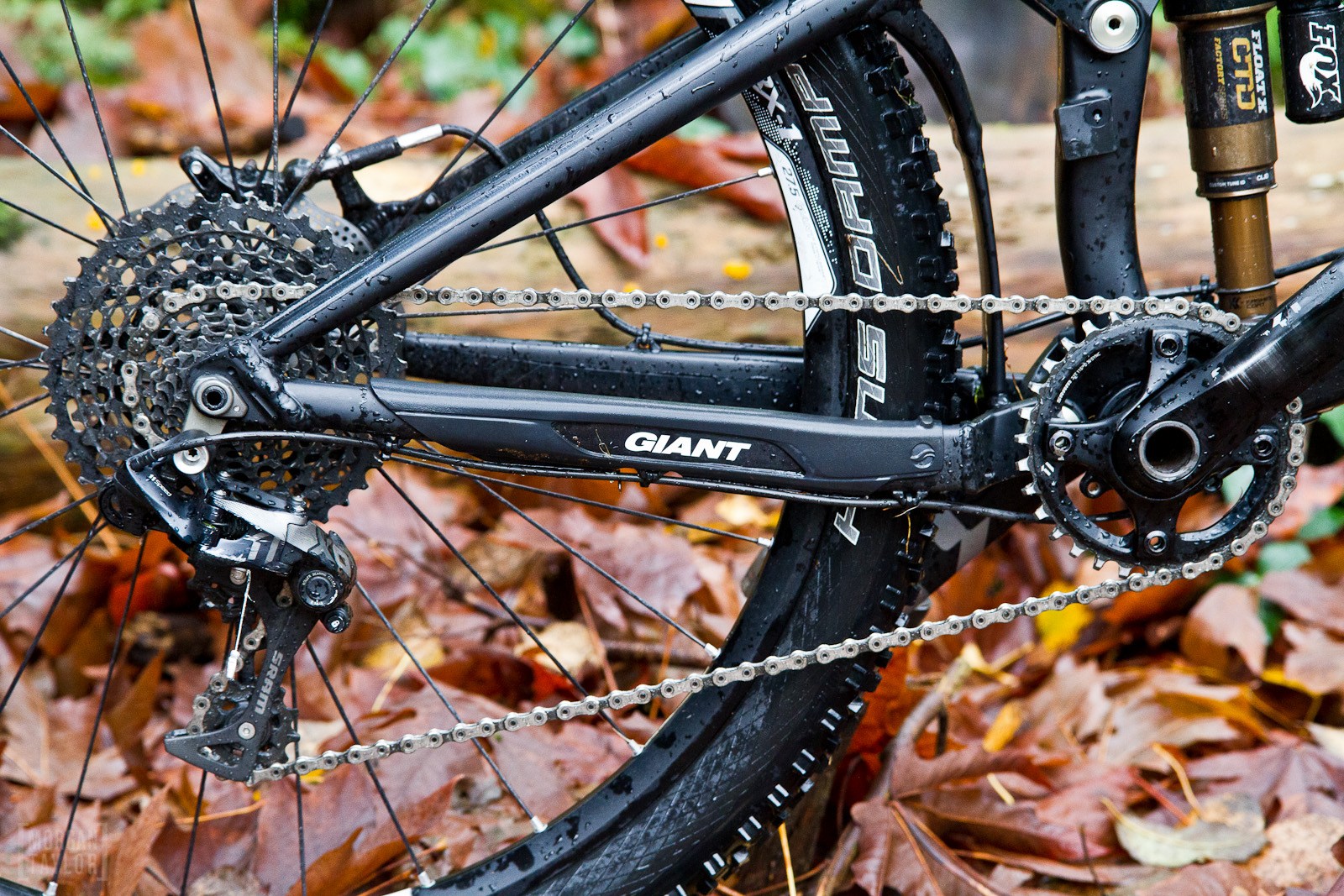 The Trance SX sports the new SRAM X01 drivetrain for those looking to stay with the hot trends. But Giant also pays attention to the details: the direct mount front derailleur tab provides the option of multiple front rings for those who so choose,and the cover on the direct mount keeps things looking clean. The integrated chainstay wrap is also a nice touch, even though clutch derailleurs have significantly reduced chain slap. Look closely and you’ll also notice ISCG-05 chainguide tabs. Versatility is the name of the game when it comes to customizing the bike to suit whatever your drivetrain needs dictate. Unfortunately the crank finish already shows signs of wear after only a handful of rides. 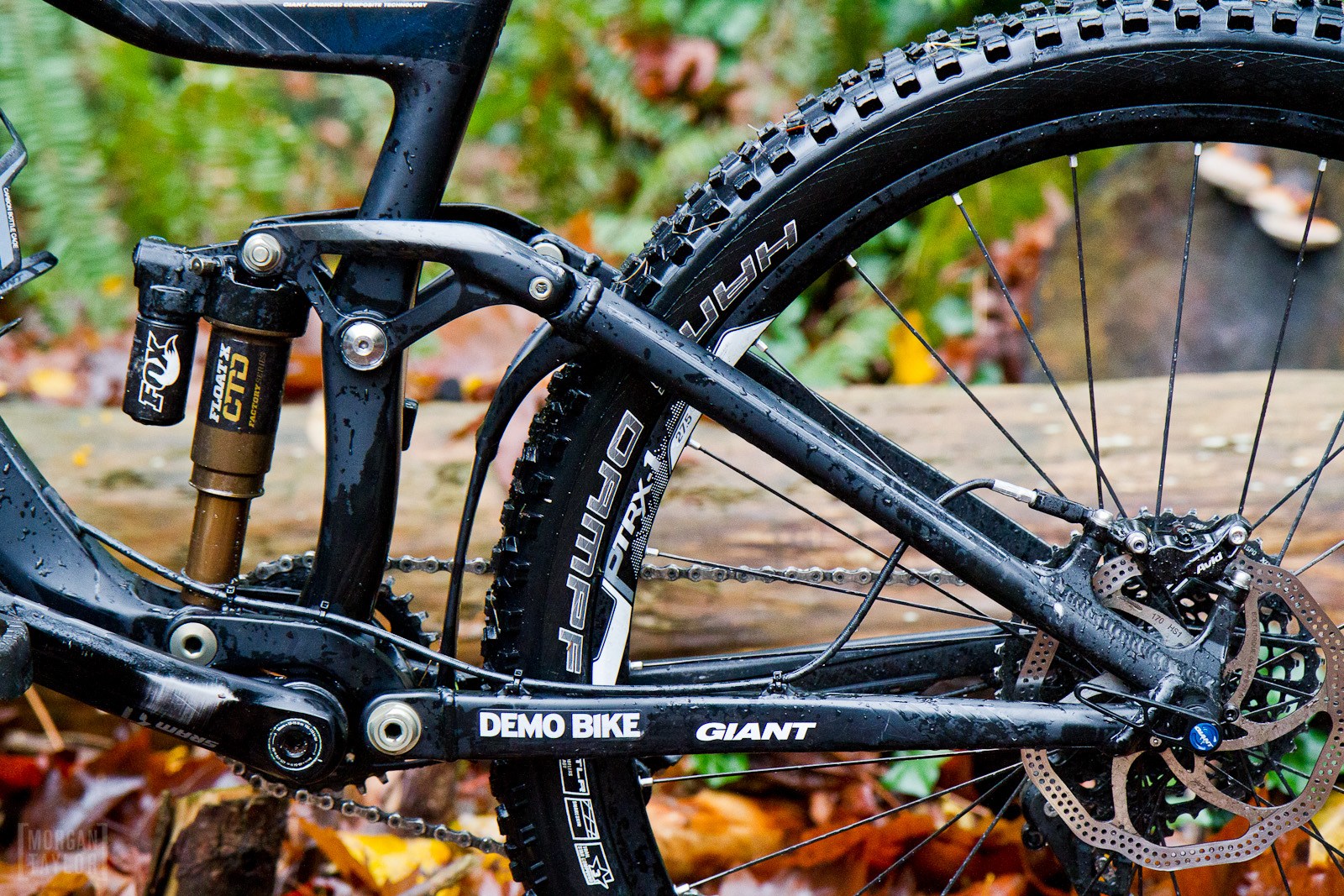 The Maestro suspension benefis greatly with the addition of the 142x12mm through axle wheel on the rear and the Fox Float X rear shock. The bump up to the wider wheel spacing and through axle drastically improves rear end stiffness compared to my previous generation Reign. The new Float X shock offers more compression damping throughout the range of its adjustments, providing more support early in the travel, helping improve climbing and pedalling performance, while also seeming to help resist the harsh bottom out that was oh so common on the Reign on big hits. 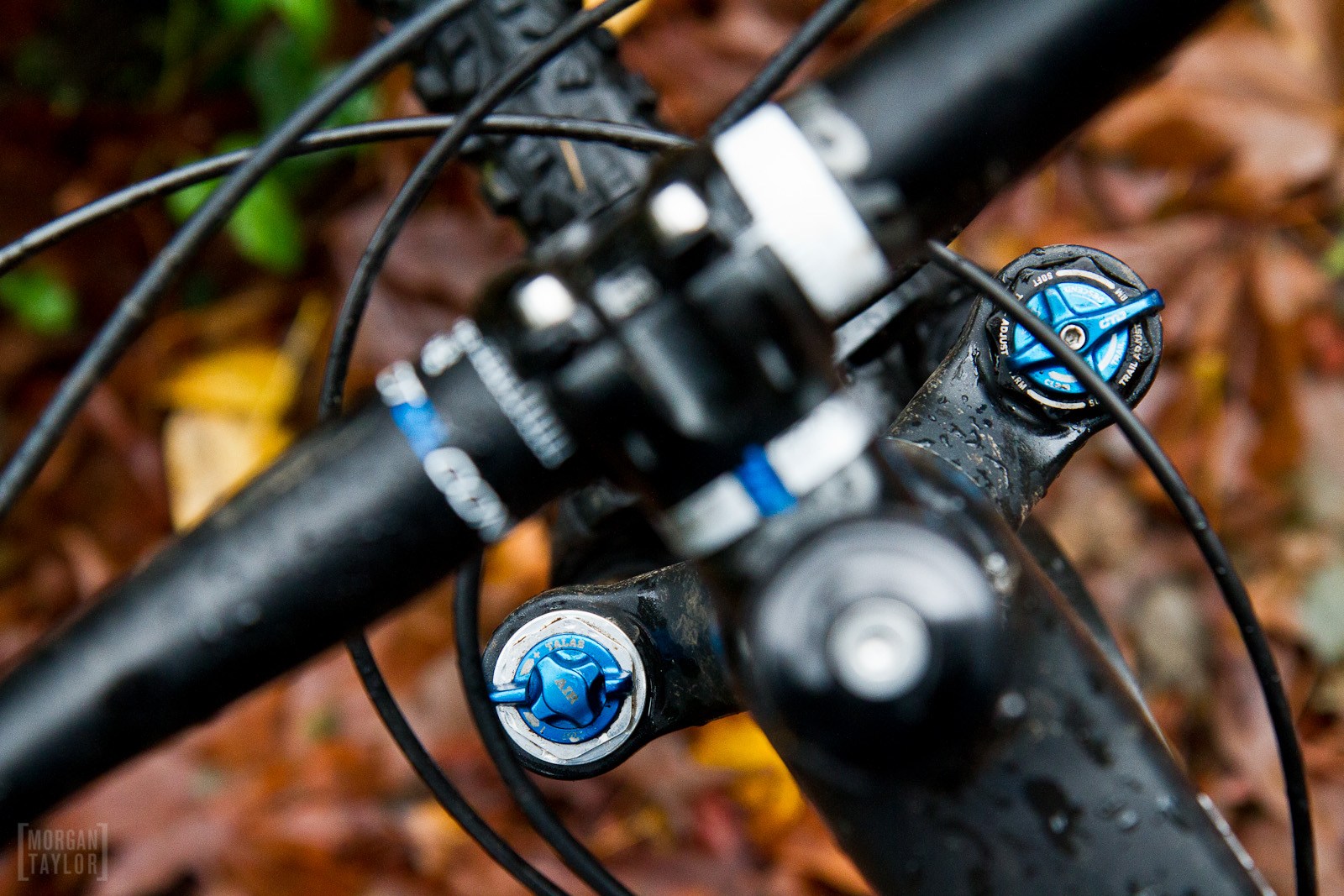 It’s no secret that Fox’s 2013 34 CTD forks were not their best effort. The revamped internals do the trick, however, and the fork exceeded expectations. Adjustments provide a noticeable difference in performance, and the fork dive that was so common in the 2013 line is absent. Giant has taken advantage of the TALAS-5 platform to give us a 160mm fork that lowers just 20mm to 140 in the low setting, matching the 140mm rear travel. 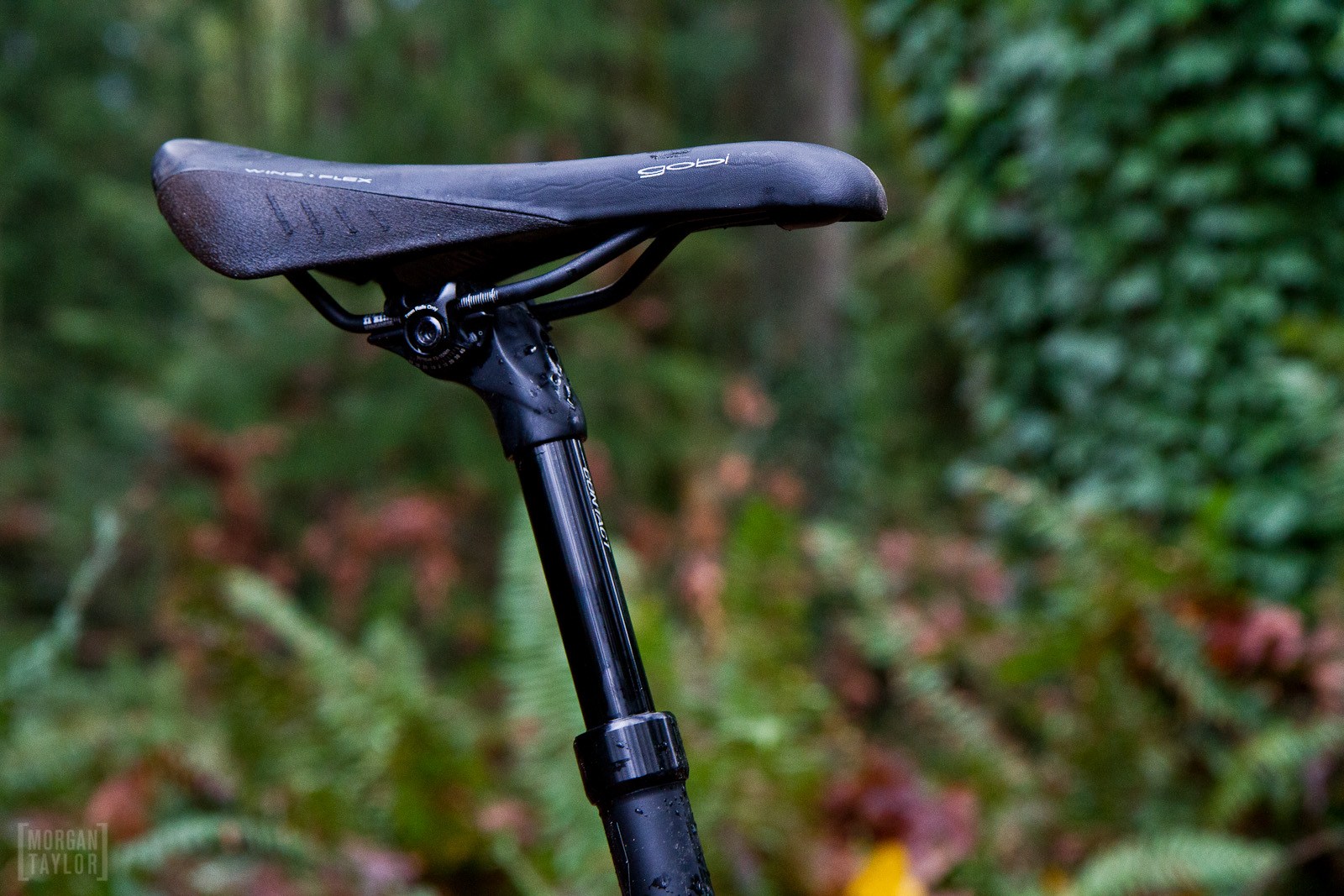 At only 100mm of travel, Giant’s Contact remote adjustable seatpost performs fairly reliably, even if it feels a bit lacking in total height adjustment when the trail turns down and steep. The offset post also puts you back on the bike. Personally I prefer something with less offset to help keep the front of the bike down on steep climbs when running shorter stems. The Fi’zi:k Gobi XM saddle isn’t the most comfortable saddle I’ve ever been on, but it’s better than many OEM offerings and quietly goes about its duties. 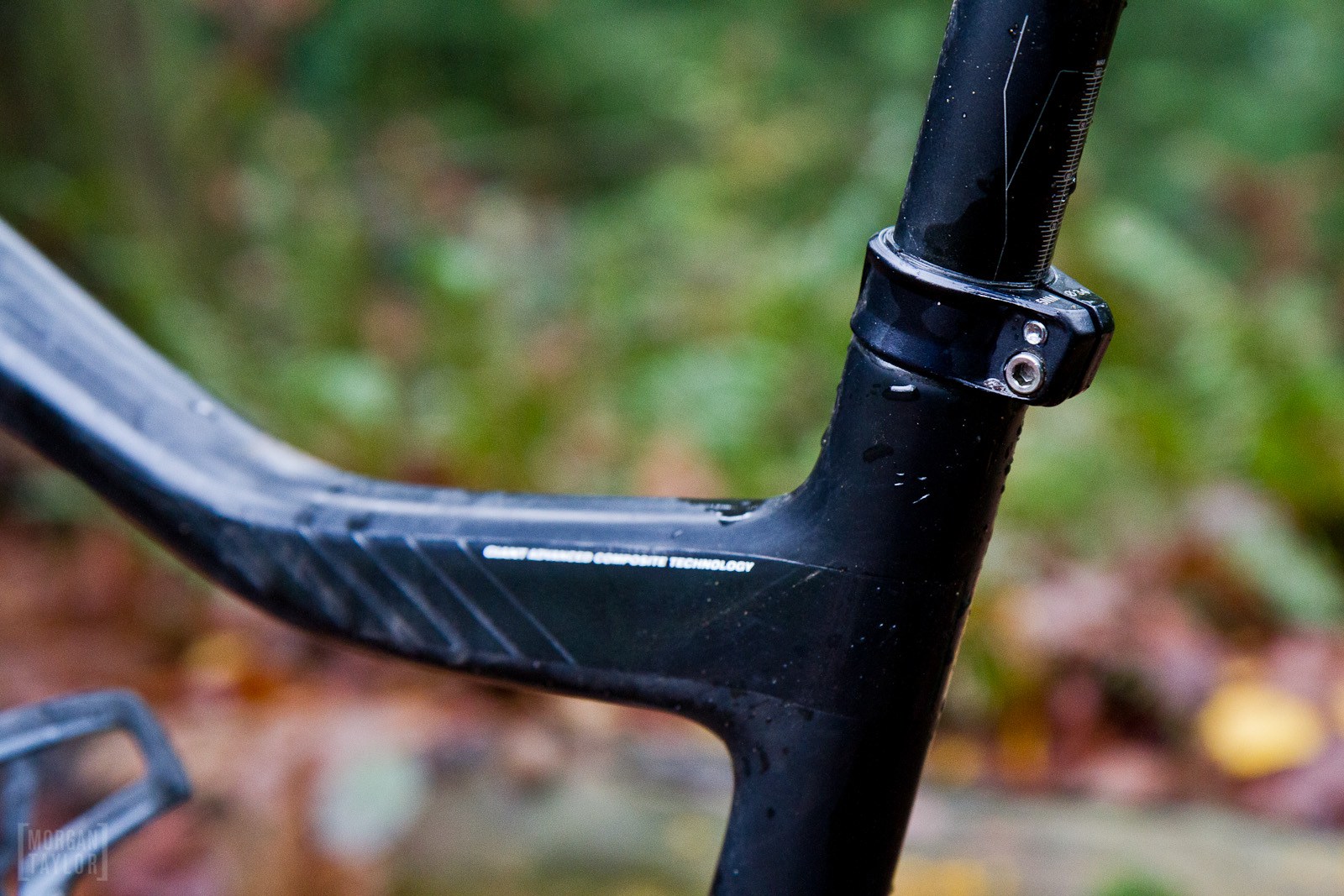 The dual bolt clamp on the seatpost binder is a head scratcher – it makes simple quick adjustments a thing of the past, and instead you get to fiddle around with two bolts. Totally unnecessary, and actually kind of annoying. 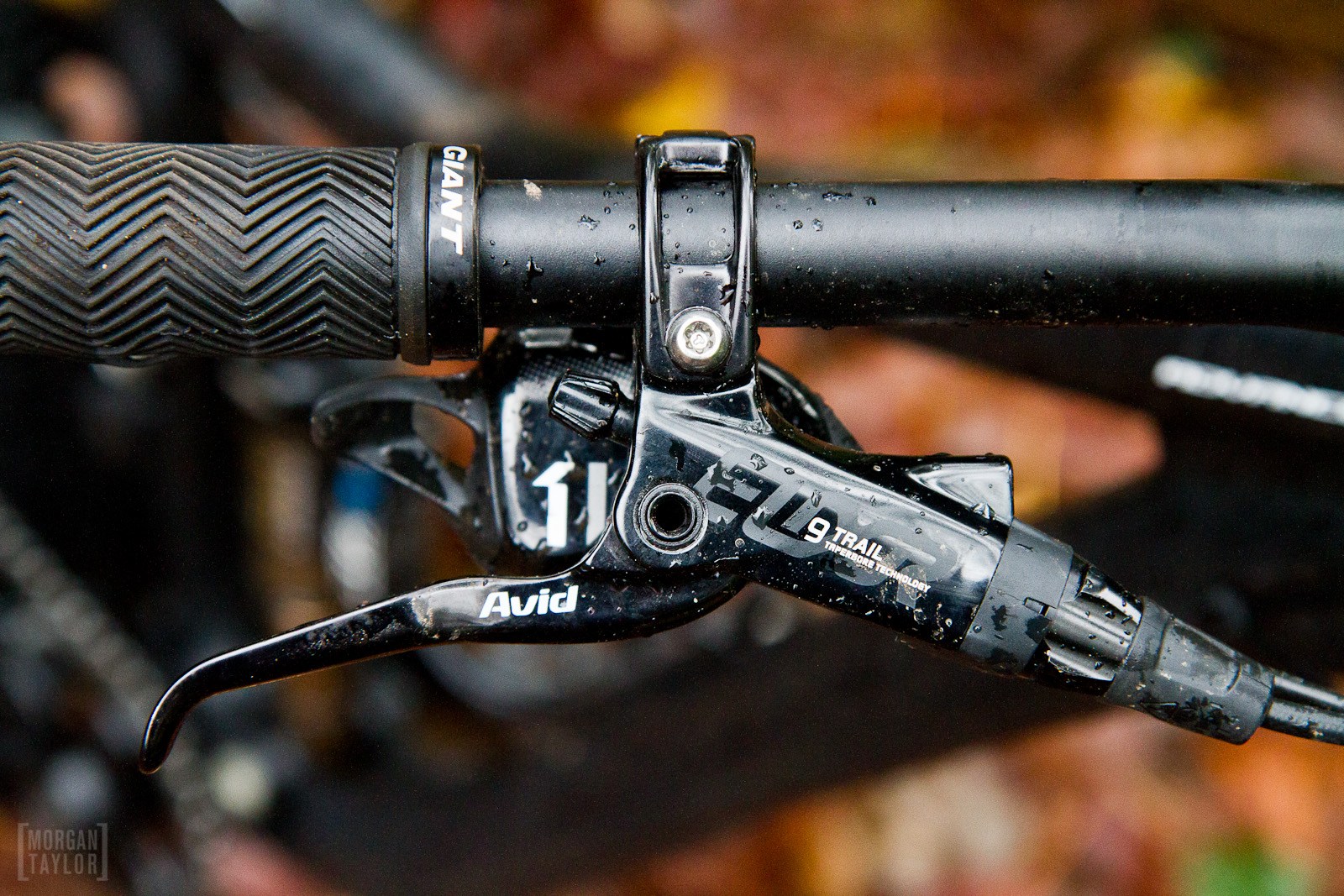 Slowing down is handled by Avid’s 4-piston Elixir 9 Trail brakes. With both pad contact and reach adjustment, getting the brakes dialed to suit your tastes is easy. I’ve had no problems with stopping power on the steepest of trails so far. 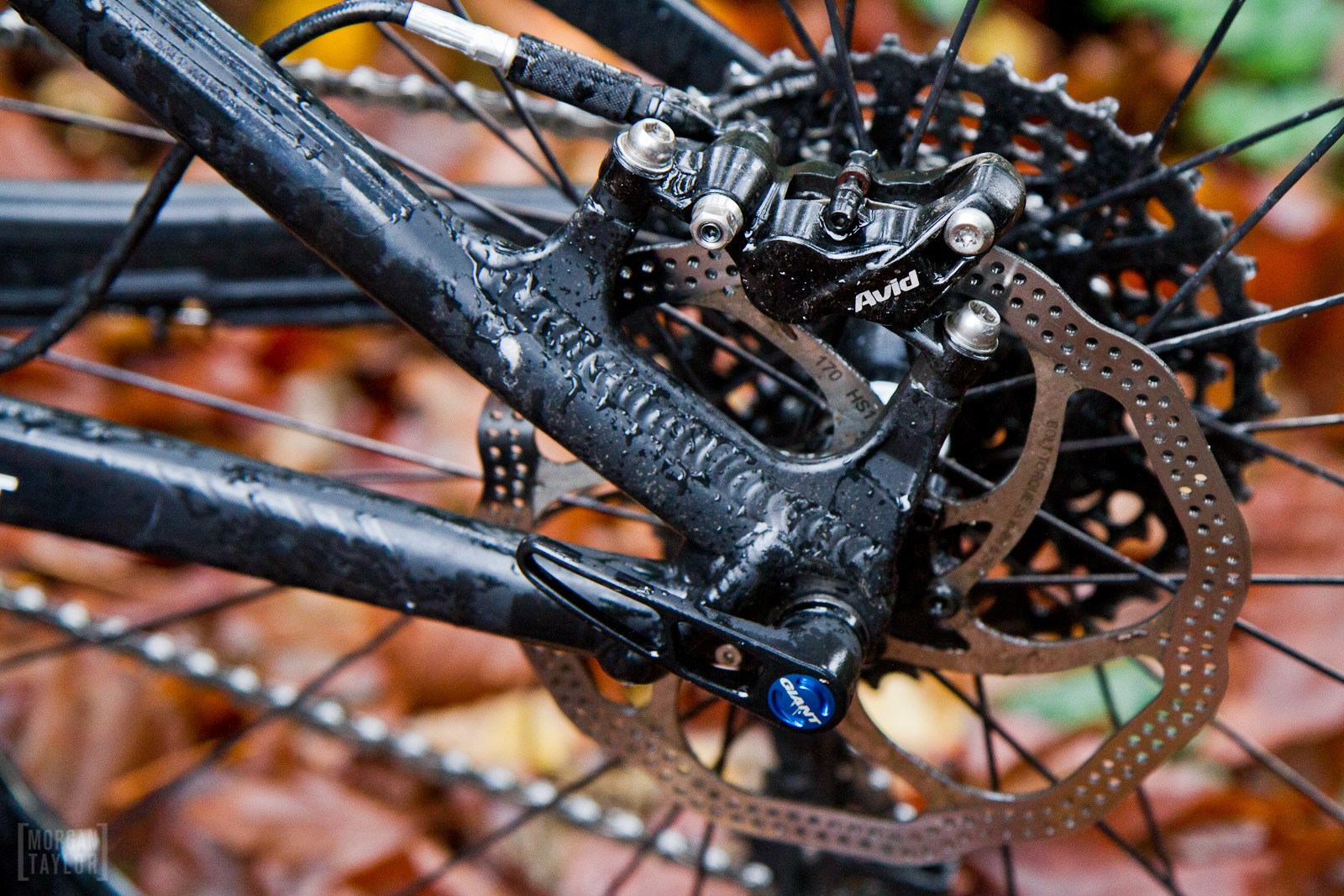 Giant has implemented a direct post mount for the rear brake, which has potential to become an industry norm.

Random notes; Giant finally got the memo and spec’d a decently short 70mm stem and 730mm wide bar, Giant’s house-branded products that are more than adequate until you decide to upgrade. Receiving the bike mid-November, I was also pleasantly surprised to find the standard Rock Razor tire on the back end replaced with a Hans Dampf. Riding in plently of wet and slimy late fall conditions, it was a welcome upgrade to help me maintain rear wheel traction.

While the remote Contact seatpost is stealth routed, it does have the trait of extending back to full height whenever you grab the bike by the seat for a hike a bike or similar, this means a bit of extra up and down if you’re on and off your bike. The remote for the post is however extremely minimal and easy to use perched beside the grip. A water bottle mount, in a normal on top of the down tube location is also very welcome by this tester; they even included a carbon bottle cage for me, kudos! 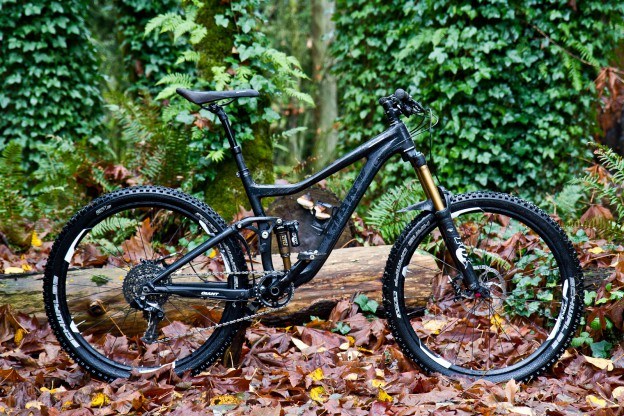 Black with a splash of Kashima, the Trance SX is low on flash and high on stealth. Coming in at $5699 CDN, with a carbon mainframe, Fox CTD suspension featuring a 140-160mm 34 fork and Float X rear damper, the highly coveted SRAM X01 drivetrain, and a stealth remote adjustable seatpost, Giant takes the value game to another level.

So far the Trance SX has been easy to adjust to coming off the Reign and I’ve been enjoying putting it through the paces on the Shore, Squamish, and Pemberton. The improved shock tune and bump up in wheel size produce a noticeable improvement in climbing performance on technical terrain. Similarly improved suspension in conjunction with the stiffer frame and swingarm combine for a fast rolling and quick handling descender that loves to be pushed hard in rough and tumble terrain. Stay tuned for a complete ride and performance review coming soon.

Black and gold… is 2014 the year of the bike modeled after Burt Reynolds’ car in Smokey and the Bandit?

Dream car!!!
I have a ATX730 now, for xc only.
Mountain Biky is my dream,although they are expensive.
anyway,I will earn more money to pay for it, that's my dream.

In the shot of the left side of the bike, it looks like the rear brake hose is rubbing on the damper shaft of the Float X. Is there room there?

Plenty of room, the hose is cable tied to the upper part of the lower linkage

I think there's a typo in the part about the seat

Todd,
What advantages do you perceive in post mount brake tabs that should make it a standard?

Joe, Morgan added that pic and caption, I'm going to have to default to him on that one.

I haven't really thought about it, so don't have a strong opinion one way or the other. If one isn't swapping brake rotor sizes, it does seem nice to not have to mess around with adaptors, I guess, if I was going to say anything….

Maybe it's an aesthetically-driven opinion, with which some engineers (such as Joe G) disagree, but I feel like post mount is a cleaner, simpler solution given that all brakes are post now. The arguments against the rear post standard are that the IS interface distributes load more evenly, and that many people choose a rotor larger than stock and require an adapter anyway.

I'm currently riding a ReignX..if I had to get a new bike this would be one of my top choices…just not sure how similar it would be..not sure I buy into 650b being superior..

I've owned a ReignX before purchasing this bike. This bike honestly feels more poised and controlled in gnarly terrain (despite the shorter travel), while feeling much more climb friendly IMO. And the frame is stiffer. You will not even notice the wheels are bigger(in a good way IMO). And I lost nearly 3lbs from my ReignX. So… I'd say all in all it's a much better bike. Full disclosure: I ditched the Giant dropper for a Reverb and switched out the 34 for a Pike.

All black pike on that thing must look so sick.

Why would anyone would buy a specialised when there are bikes like this out there?

I love you, Amen.

Nice spec. The 2-bolt clamp sure does seem dumb! A common problem with droppers is over-torquing of the collar bolt, which binds up the stanchion. The two bolts may spread the load over a larger area better, though it looks easy to over-torque still.

Giant CF road bikes use the same 2 bolt collar. I wonder how many cracked seattubes from over-tightening before they went to a 2 bolt?

two bolt seat collars allow you to have a sloppy tolerance on the seat tube ream diameter. They clamp on the carbon AND on the post. It makes manufacturing easier. adjusting the post, not so much

the bike actually feels really balanced, and even climbing in 160mm the slack head angle isn't totally unmanageable…and if it is, drop it to 140 with a quick flip of a switch.

Seems like a pretty sick bike. Which seems counter-intuitive to me as i've always felt Giant was more of a conservative brand generally.

The regular Trance solves the issue by specing a 140mm fork and 67˚ HTA. SX model is a beefed up version

Followed the Path of the Banshee Spitfire. Great Geometry! 🙂