Fashion be damned. There are still those willing to stand up for the supremacy of a well-balanced 26-inch wheeled bike. Specialized released their Enduro 29er this year and attracted a lot of attention and praise (some of it reluctantly given by those who didn’t think they’d like a long travel 29er and were surprised). And it is an excellent bike. Feat of engineering. Kickass monster-trucker. But a 29er will not be replacing a smaller wheeled whip for this guy in the 165mm travel category anytime soon. Specialized sent us an S-Works Enduro frame in the Spring and once the parts were all assembled, it was built up into the beauty you see below. 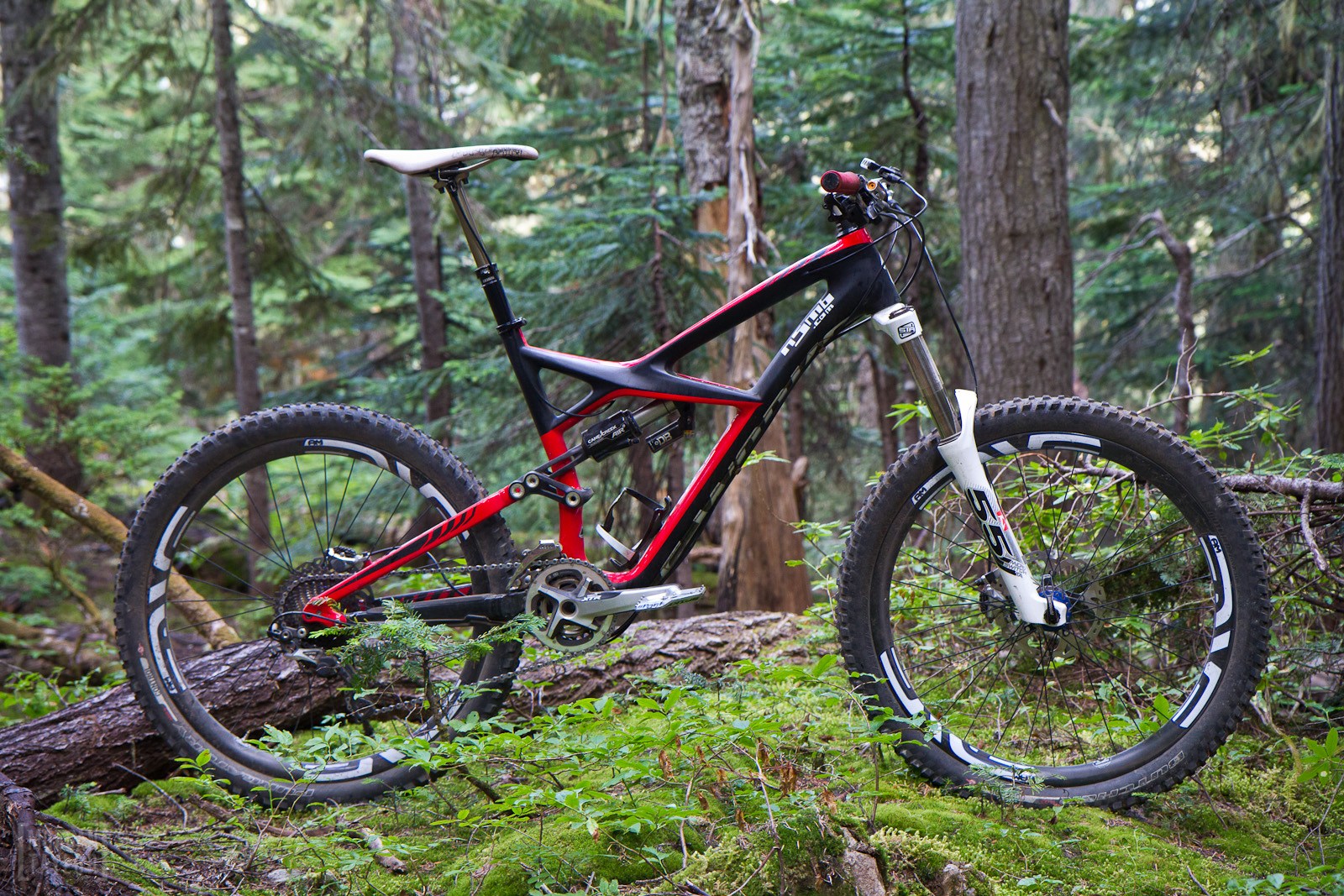 We tried something a bit different from the normal Enduro spec and fit a XTR Trail group on there, and while a 2-ring setup sacrifices about a pound of weight and the simplicity of a single ring design, there is no mistaking the superior response and precision of Shimano shifting. 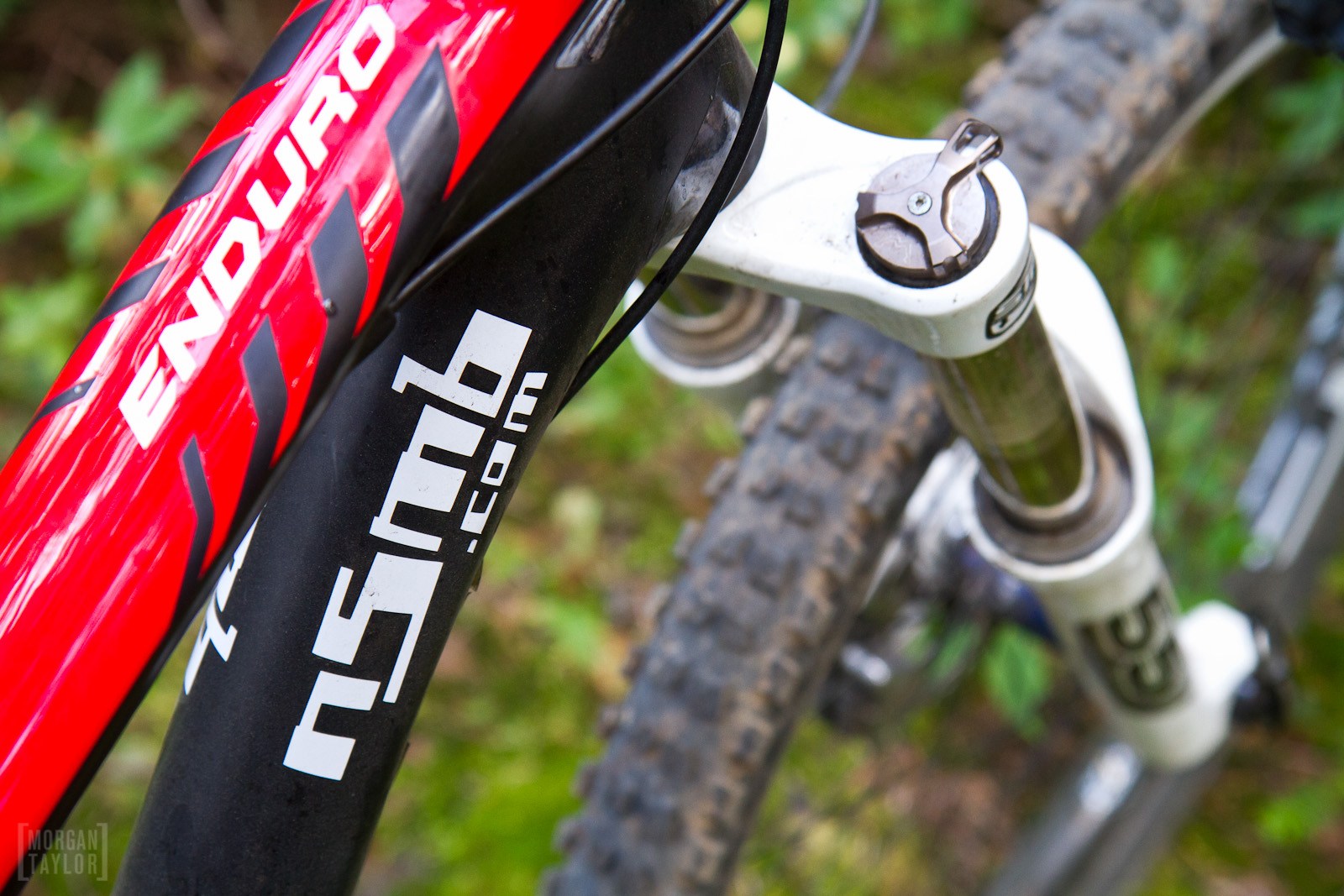 The S-Works is a striking beast, with the trademark X wing design and bold red and black lines. At just under 29 lbs., this wasn’t the lightest configuration the bike can take on, however it is hardly porky, either. Again, you could lose a pound by going to a single ring setup, and the fork is not the lightest choice but its performance never had me wishing for less weight up front. 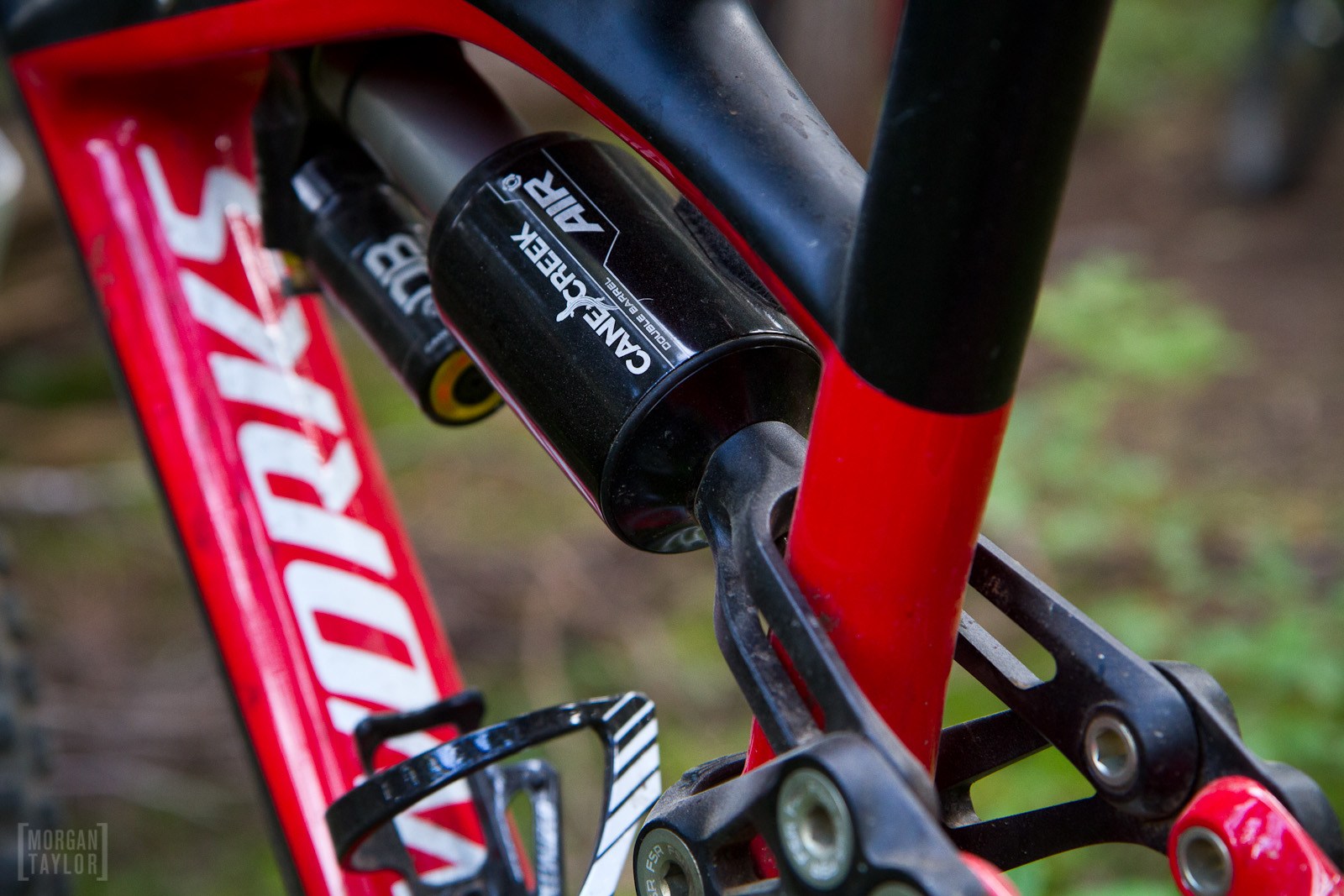 Cane Creek’s DB Air is the stock shock on the Enduro S-Works, whether sold as a complete bike or frameset. Recommended Cane Creek settings for the Enduro were close to ideal. 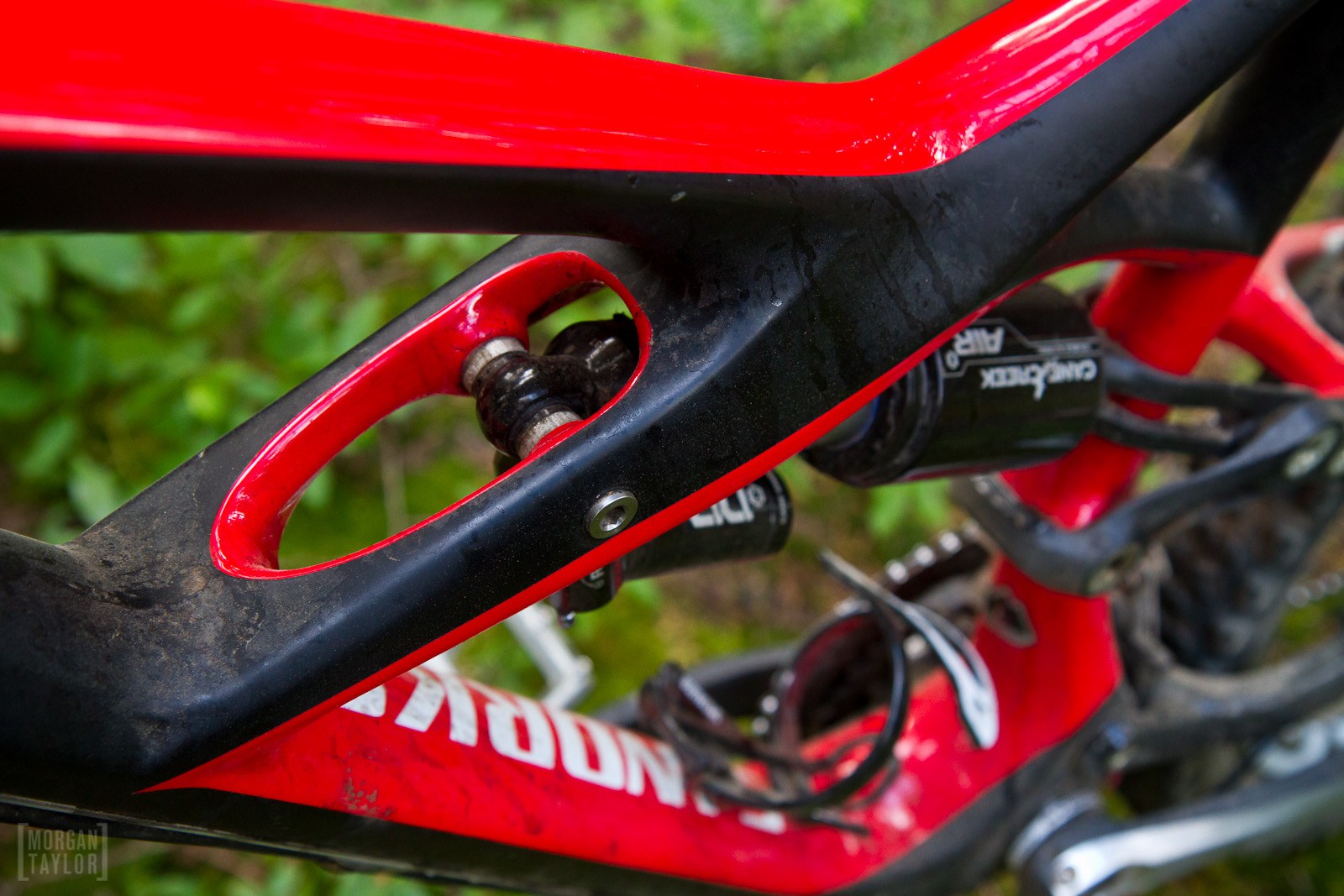 The front shock mount eyelet had a bit of play caused by a lack of thread depth. It was an easy fix with some selective spacer substitution, thanks to the wrenches at Obsession:bikes in North Van. 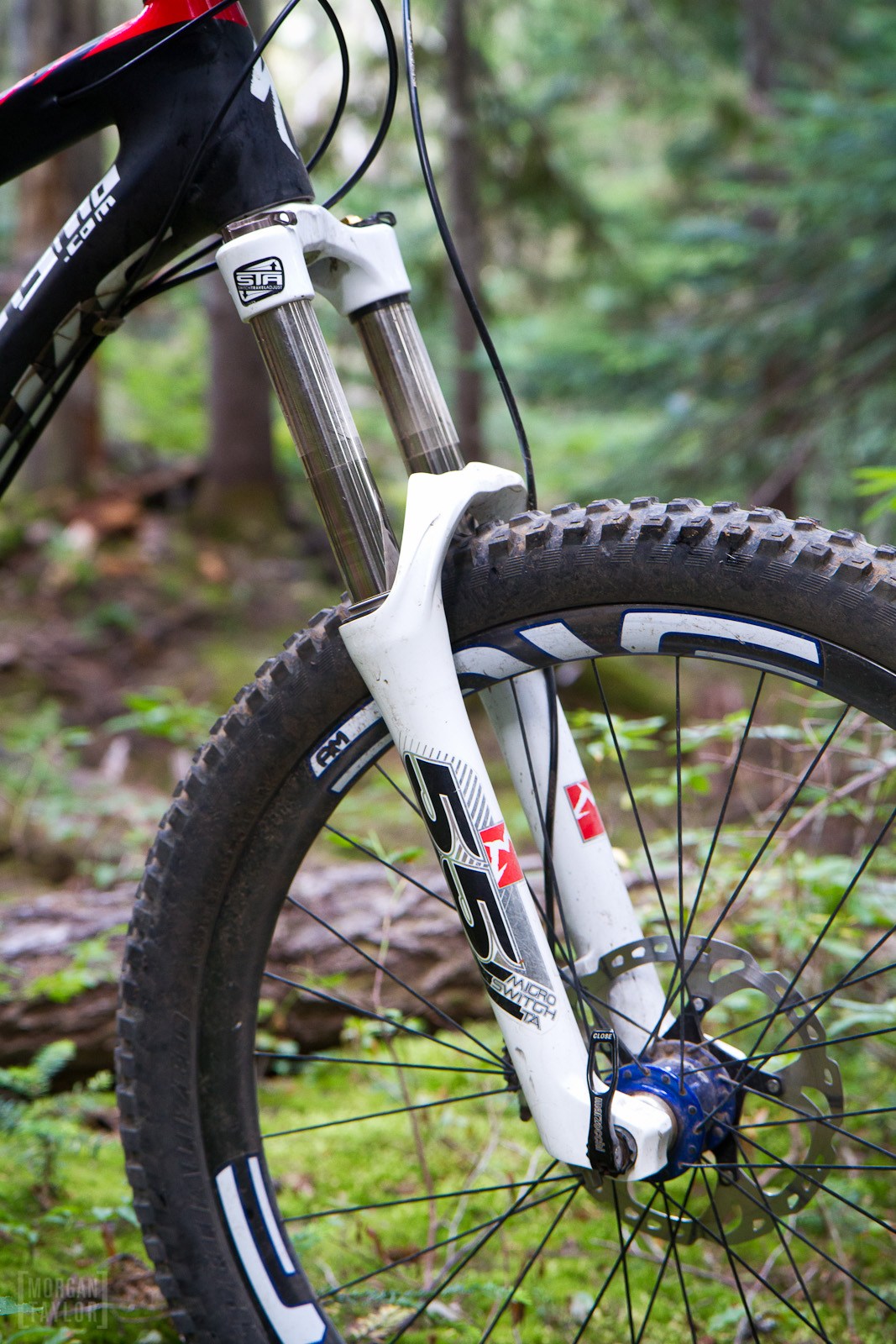 The Marz 55 Micro Switch STA needs a shorter name so we can spend more time talking about its performance. This is the second 55 in a row that I’ve run on a long term AM bike and they’re both been reliable performers. Time will tell what happens to the company but the product is definitely strong. 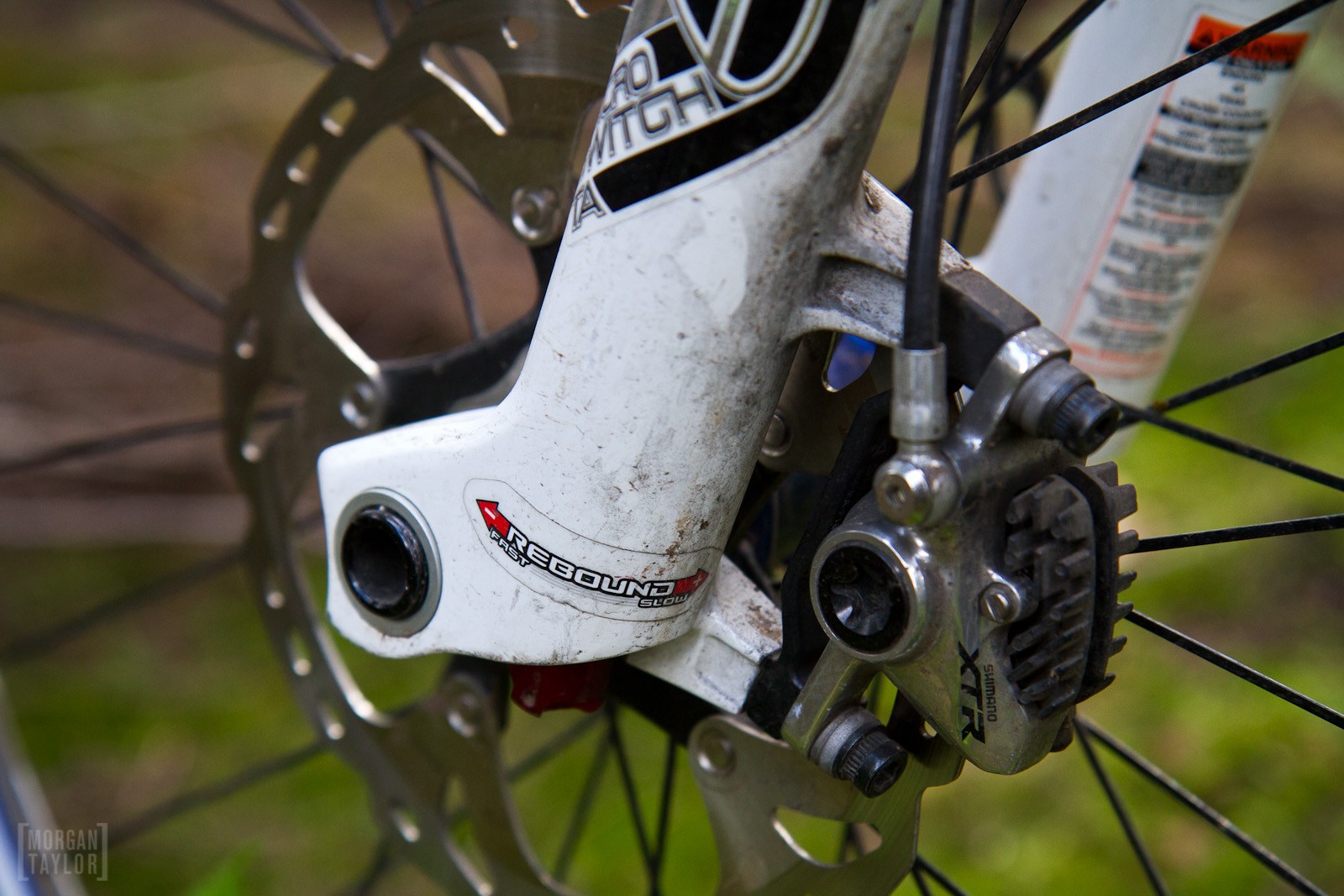 We did not clean the bike up before shooting pics – everyone’s seen all the parts when they’re clean already anyway, so have some brake grime.

The Enve/King wheel set makes its presence known on every ride. If it isn’t the angry bees gathering at the rear hub, the stiff rims make it hard to ever want to go back to a more flexy setup. Both are guaranteed for 5 years and although that still adds up to about $600/year, if you can afford them, they are worth it. We’ll have more on this wheelset in the future. 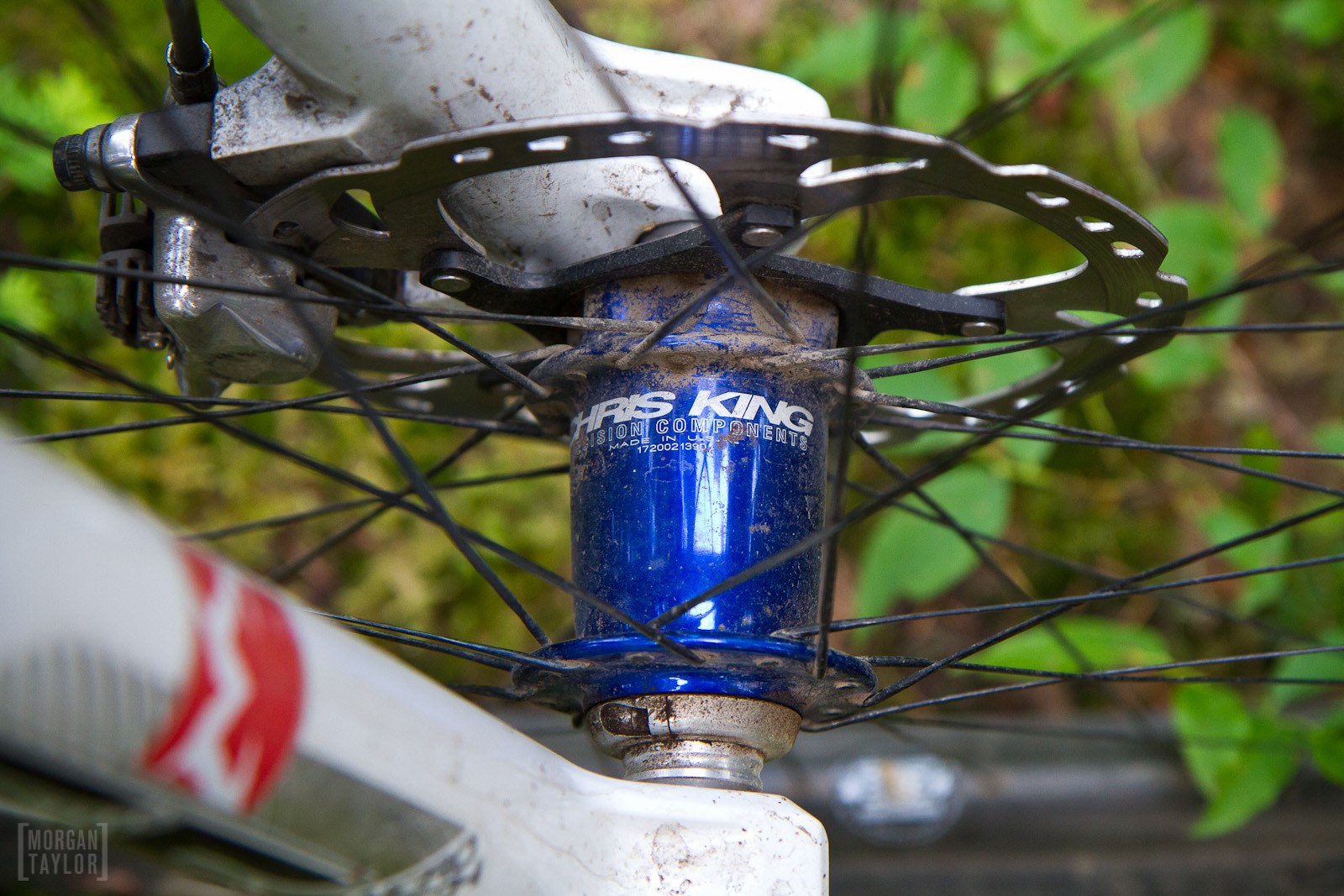 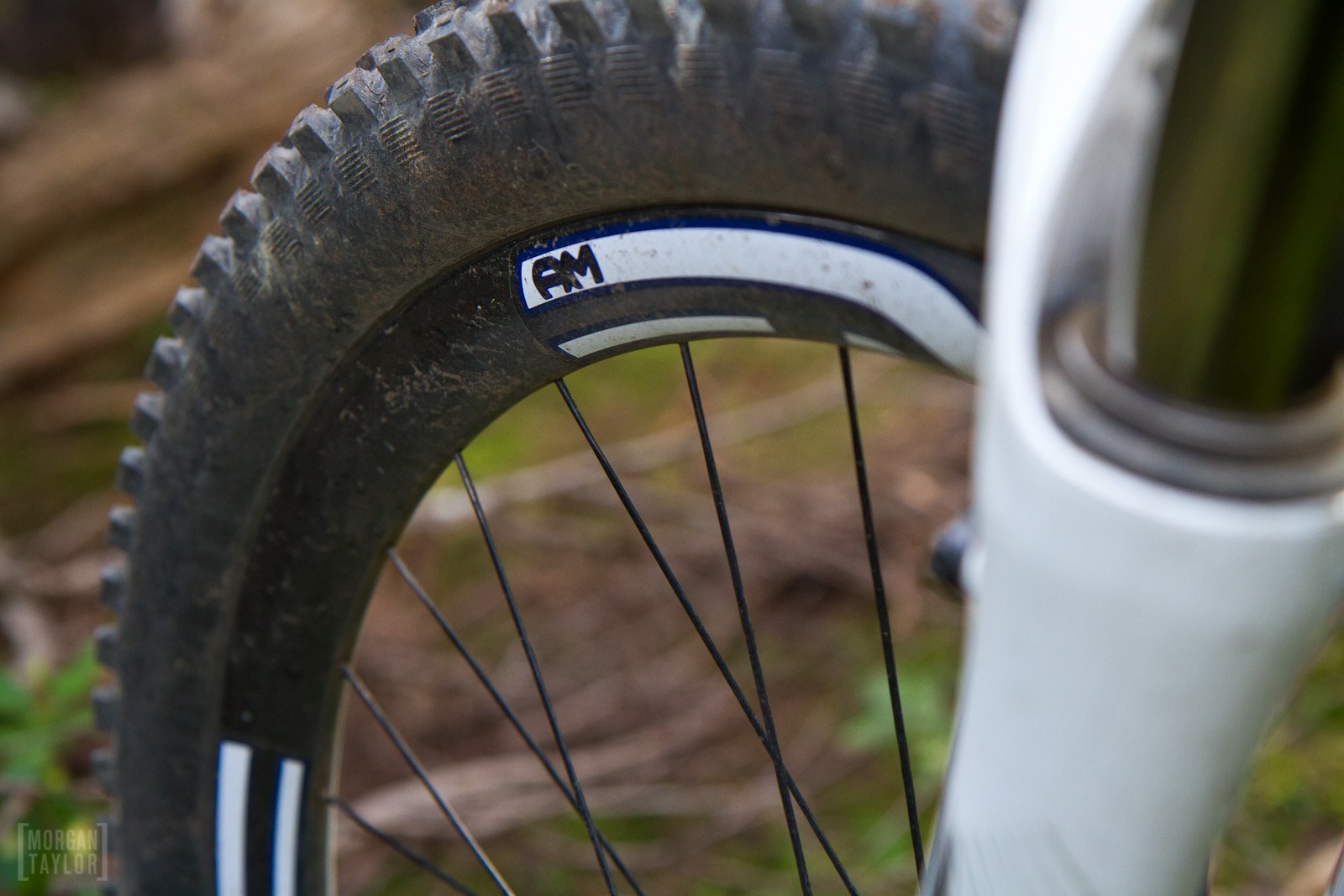 …but it goes nicely with the custom decals Enve made for the wheelset. It is somewhat close to NSMB blue and anyway, too much matchy match can be boring.

Morgan has already reviewed the Fox DOSS post, and it has performed similarly on the Enduro. Each frameset comes with a Specialized Command Post, by the way, however ours was missing a small piece and the build was imminent, so the DOSS was subbed in. 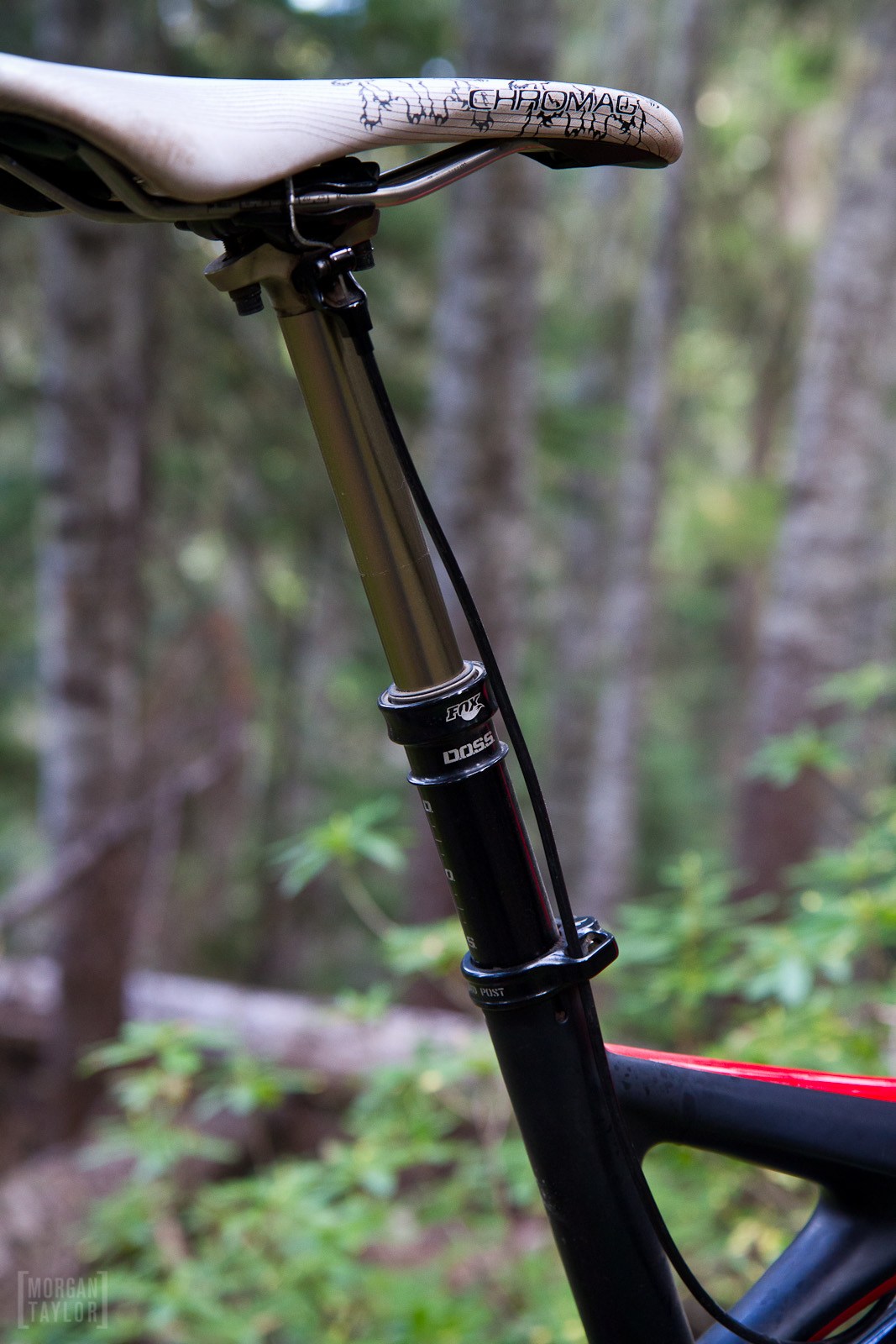 The Chromag Moon saddle took a few rides to break in, but the man-tingles disappeared and all is well. The DOSS works as advertised and does exhibit some play but has otherwise been excellent. 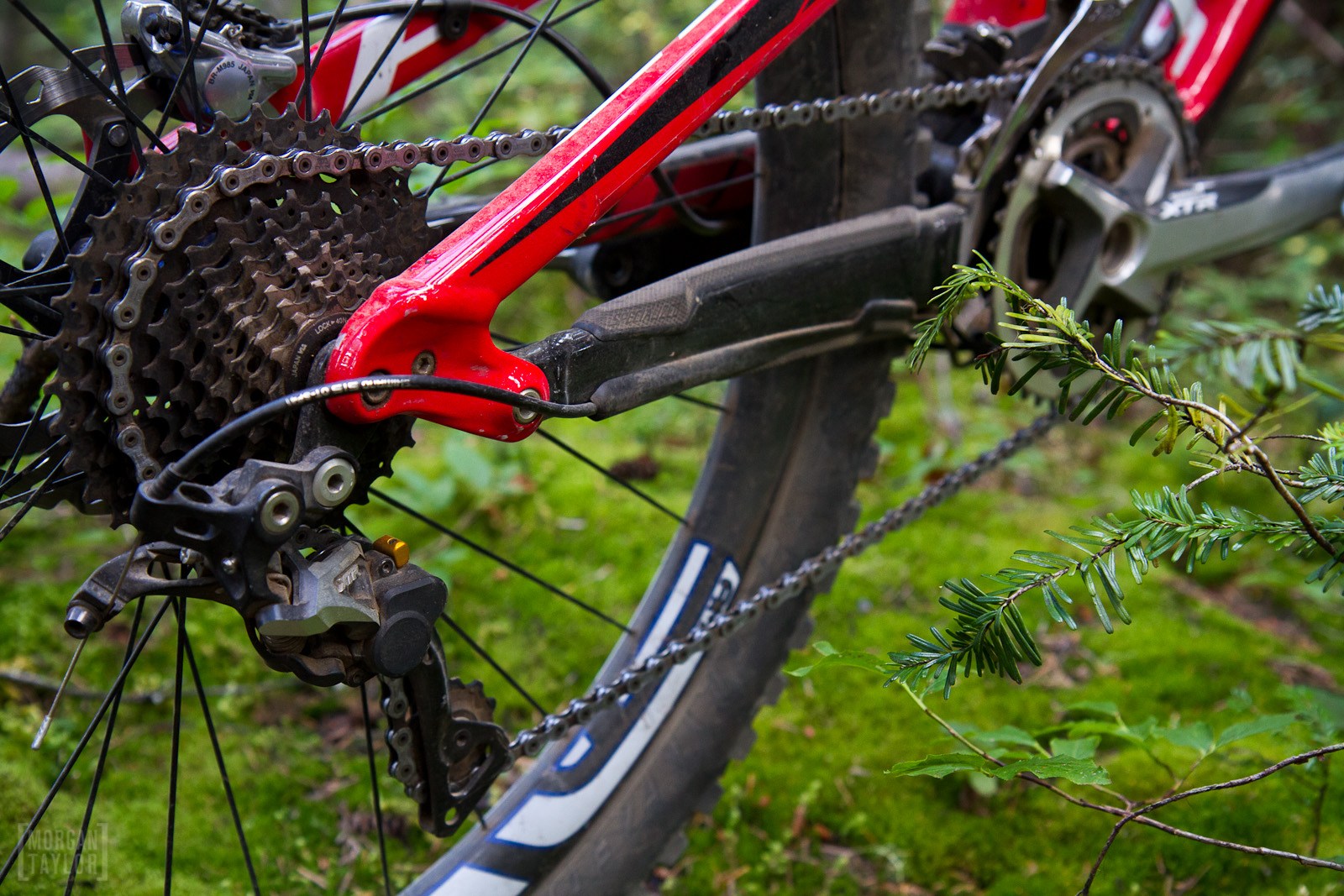 Everyone should be lucky enough to experience XTR shifting at some point. Early on, the derailleur got its signals crossed and ended up in the spokes. It was bent to hell but brought back to life and hasn’t complained since. And the clutch? Never going back. 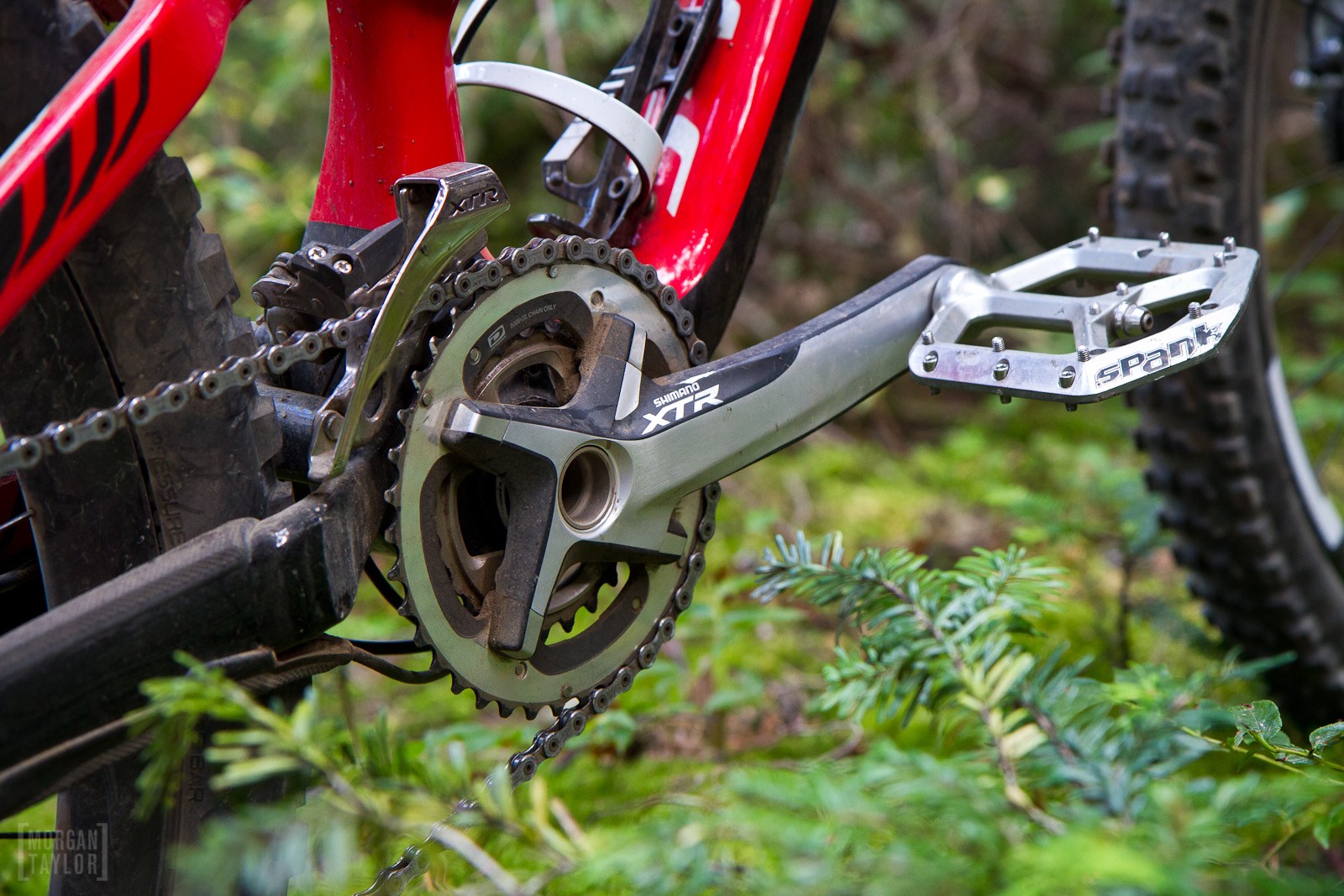 Two rings aren’t dead quite yet. I’ve heard it argued that one shift on the front is similarly easy to 2-3 on the back and while I don’t buy it, I can understand the perspective. One thing I do miss is a bash guard, though – it’s unsettling to contact rock with that pricey chain and if you’re in the granny ring and make contact, it’s a frightening reminder of what life was like before we had bash guards. A life where your front teeth were on the protected list.

Race Face provides the cockpit bits: new SixC bar, Turbine stem, and Half Nelson grips, which have a raised section on the underside that took a bit of getting used to but provide a lot of extra grip. 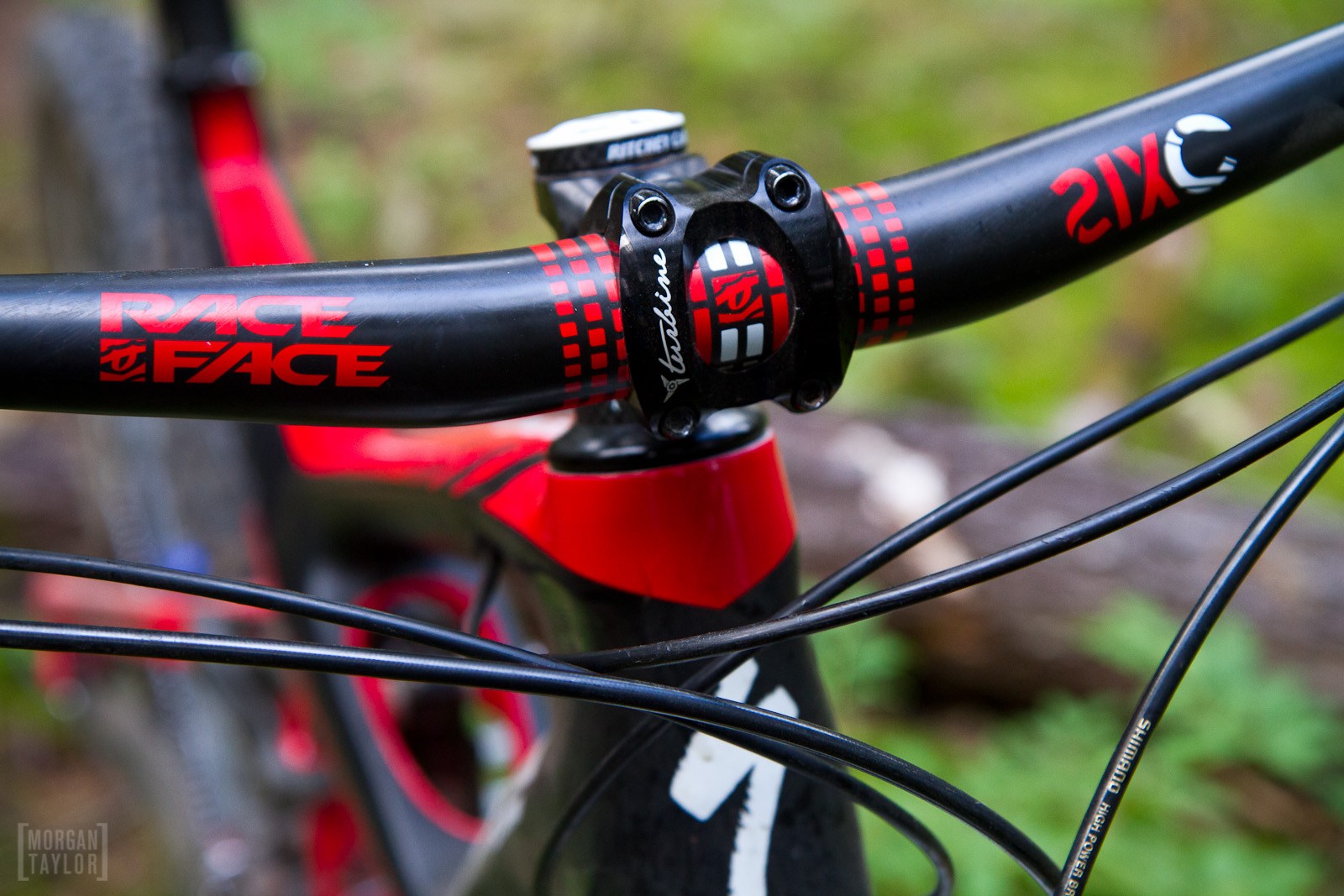 The re-released Race Face SixC comes in a big boy width of 785mm. At first it felt destined to be cut down a bit but after two rides we were sold on the full pull, and it has become a consistent source of added confidence on steep sections where leverage and balance are key. 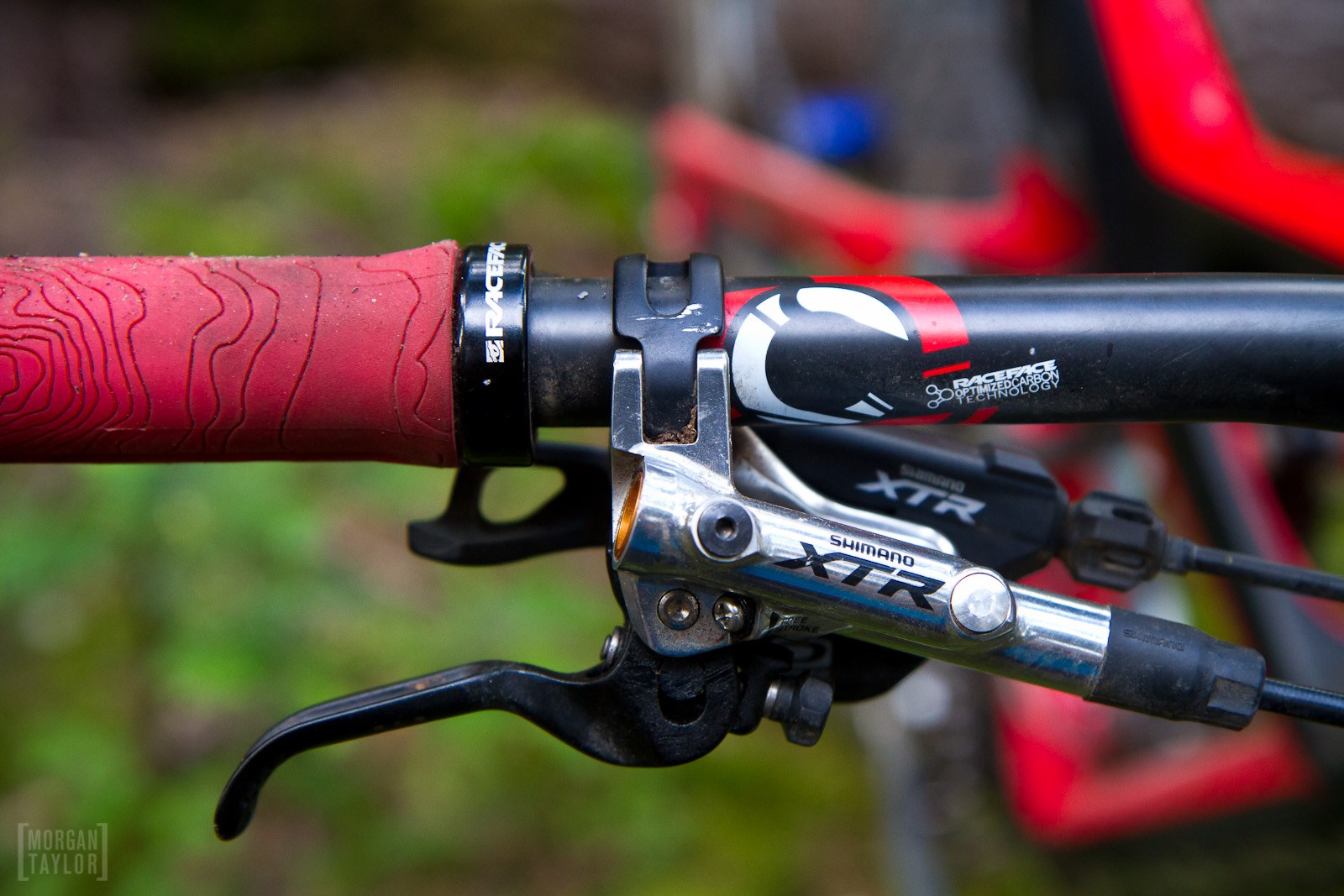 Shimano’s XTR Trail brakes are simply great, with extremely positive engagement and response and enough modulation to keep you happy when a little finesse is needed.

Another standout in the XTR group are the brakes. Lots of power and a really positive feel and, in my opinion, the best levers in the biz. 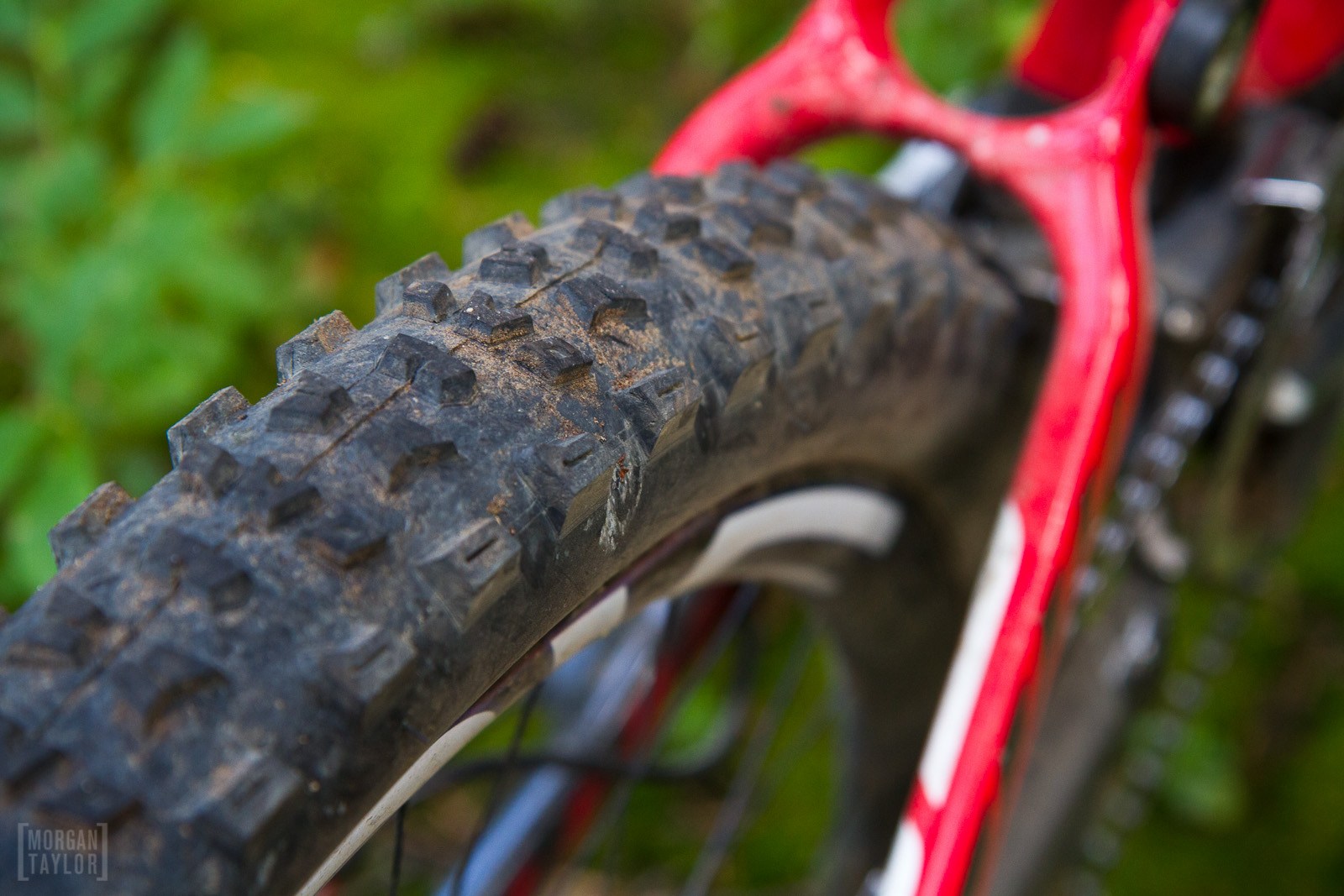 Specialized Purgatory 2.3 Control Casing in the rear provides more bite than it would appear and rolls fast.

Specialized tires are currently being reviewed by some of our forum users so we won’t comment too much just yet, but we ended up with a Butcher 2.3 Control on the front end and a Purgatory 2.3 Control on the back and they’ve handled themselves well in a variety of conditions and locations. 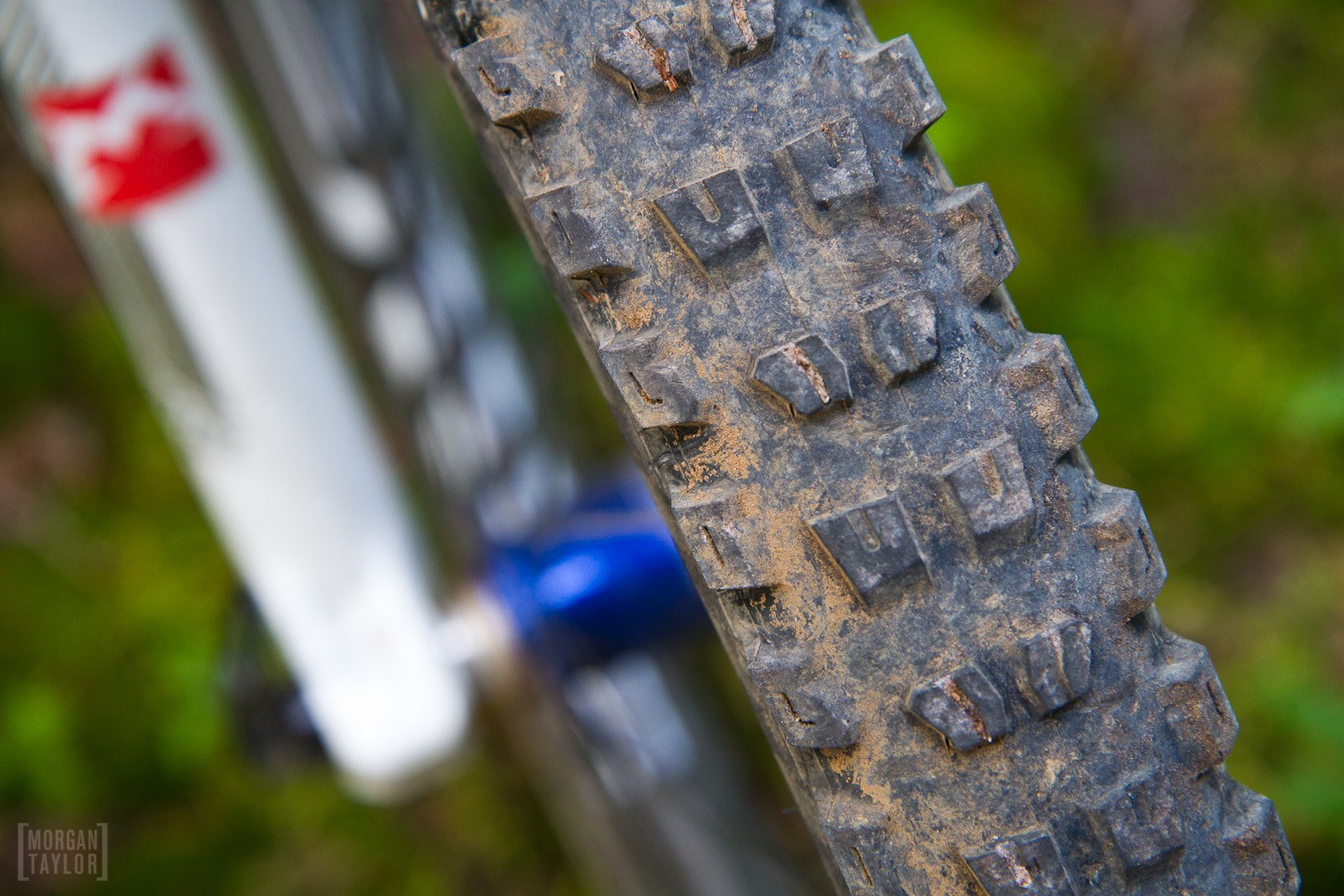 Specialized Butcher 2.3 Control up front. By the way a Specialized 2.3 is thick compared to most so these ended up having sufficient meat for most conditions.

A full review is pending.

What’s the most drool-worthy part the build?

Why not leave the crankset as it is and go with a ISCG mounted Taco?

It does come with the 2014 CS DB.
I already rode that in August. Feels good when in the climbing mode. Shock felt a bit dead then, but good for climbing. Too much volume for my liking though. But some spacers might help. Didn´t have the chance for that though …

Is that really the correct orientation of that rear tire?

Good eye. No it isn't. I mistakenly mounted it backwards once and found the traction to be enhanced for braking on steeps. Go figure. Haven't switched it back…

Given that this is a review of a fully custom built bike it is disingenous to post a picture of a standard, 104-BCD, XTR crankset with a caption lamenting the lack of a bashguard?

Remove the custom flush mount (vanity) chainring nuts/bolts - Purchase a 104-BCD bashguard that covers the ring size of your choosing and a set of standard chainring bolts - Problem Solved.

Blackspire makes a nice, light, 36T bashring if you are having trouble tracking one down.

The carbon Enduro is an awesome - very fun - bike, it was (tied with the carbon Nomad) for my favourite small wheel (26″/650b) bike that I road this year.

Hopefully 2014 comes with the updated CCDB Climb Switch shock as it offers a significantly enhanced climbing platform vs. the "custom for Specialized" LSC adjuster on the Enduro.

A bashguard will have zero compatibility/functional issues with the front derailleur or the frame.

It may look a bit "off" - but I suppose it depends on how you weight the the ascetic of your bike against the survive-ability of your expensive chain ring. It doesn't change the fact that the reviewer can easily resolve their concern and provide a service to any reader in a similar situation by sharing their solution.

Pete - if you want to try a 104BCD Bashring that fits that crankset, I have one left over from a similar set-up. If you have access to a grinding wheel you could turn it down to exactly the right size.