In the world of West Coast mountain biking, the lines between categories have become increasingly blurred. Riders are more than willing to pedal up long technical climbs to access steep, technical trails that drop straight back down. Most brands are putting out bikes that are seemingly capable of doing it all, while catering to their particular suspension design. Rocky Mountain is no exception: the Altitude 790 MSL is their SmoothLink offering, and it totally blurs the lines between trail, all-mountain, and enduro. Being the topflight model, the 790 comes spec’d to the nines, which is to say that it has pretty well almost everything a $6999 bike should have (you can get into an Altitude for as little as $2850). 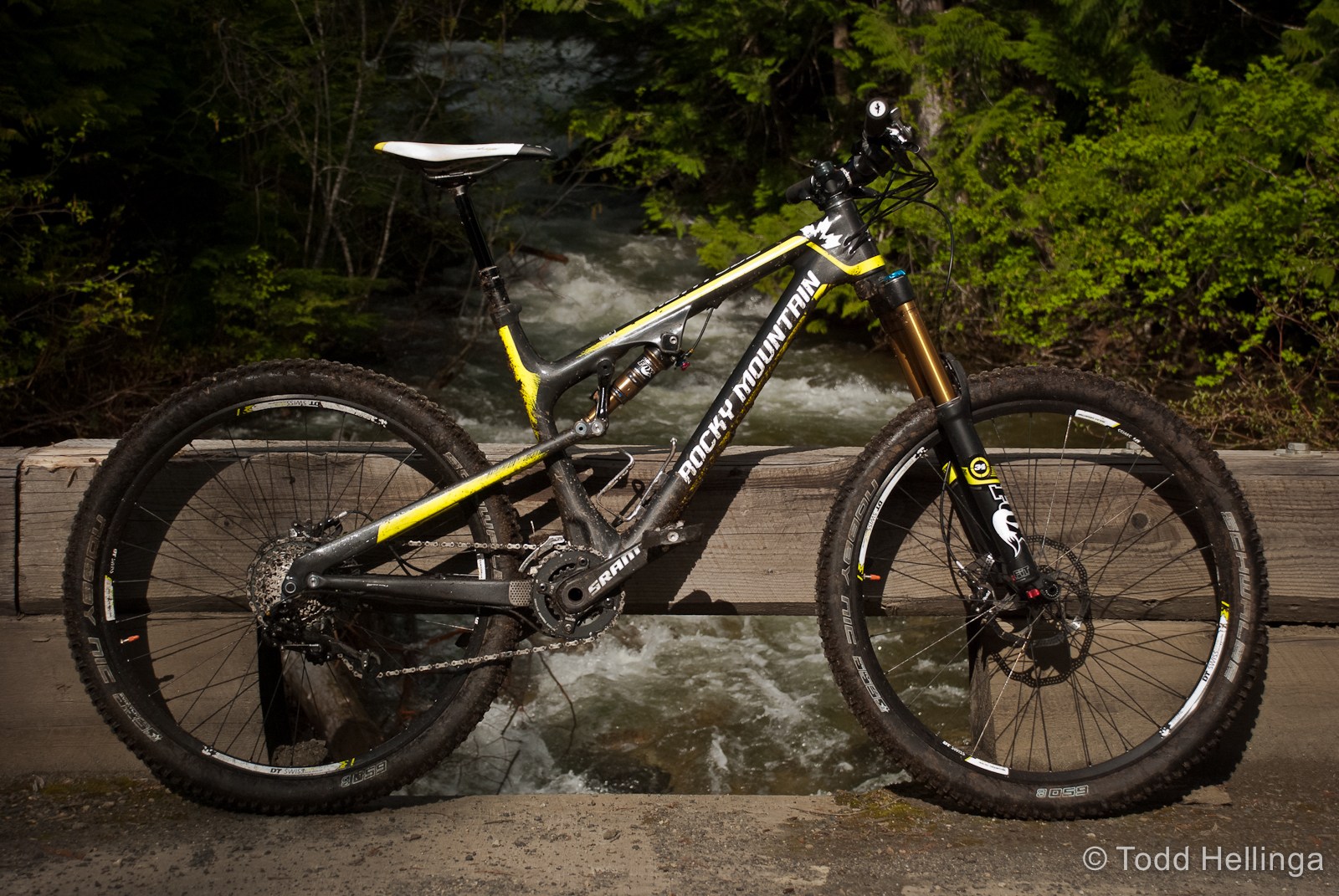 Clean, straight lines, with room for a large water bottle mounted on top of the downtube, the carbon framed Altitude 790 comes spec’d with; SRAM XO drivetrain and brakes, Reverb Stealth post, Race Face carbon bars and a, very appreciated, 60mm RF Turbine stem. Suspension duties are handled front and rear with Fox offerings, a 34 CTD fork and a CTD rear shock with handlebar remote, notably lacking however is a travel adjust feature on the fork. The bike rolls on a DT Swiss wheelset with traction duty assigned to Schwalbe’s Nobby Nics, and a fi’zi:k saddle for sittin’. 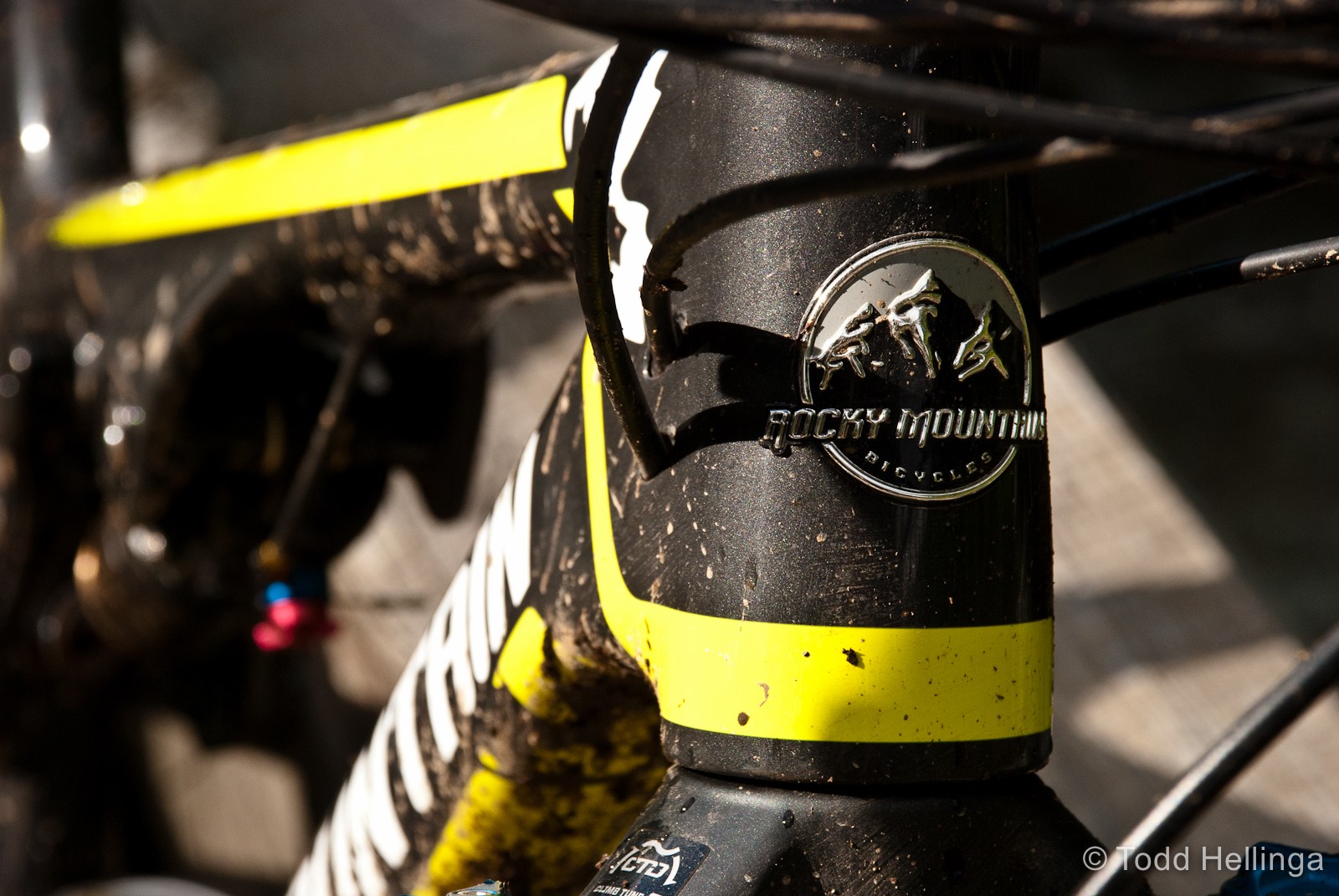 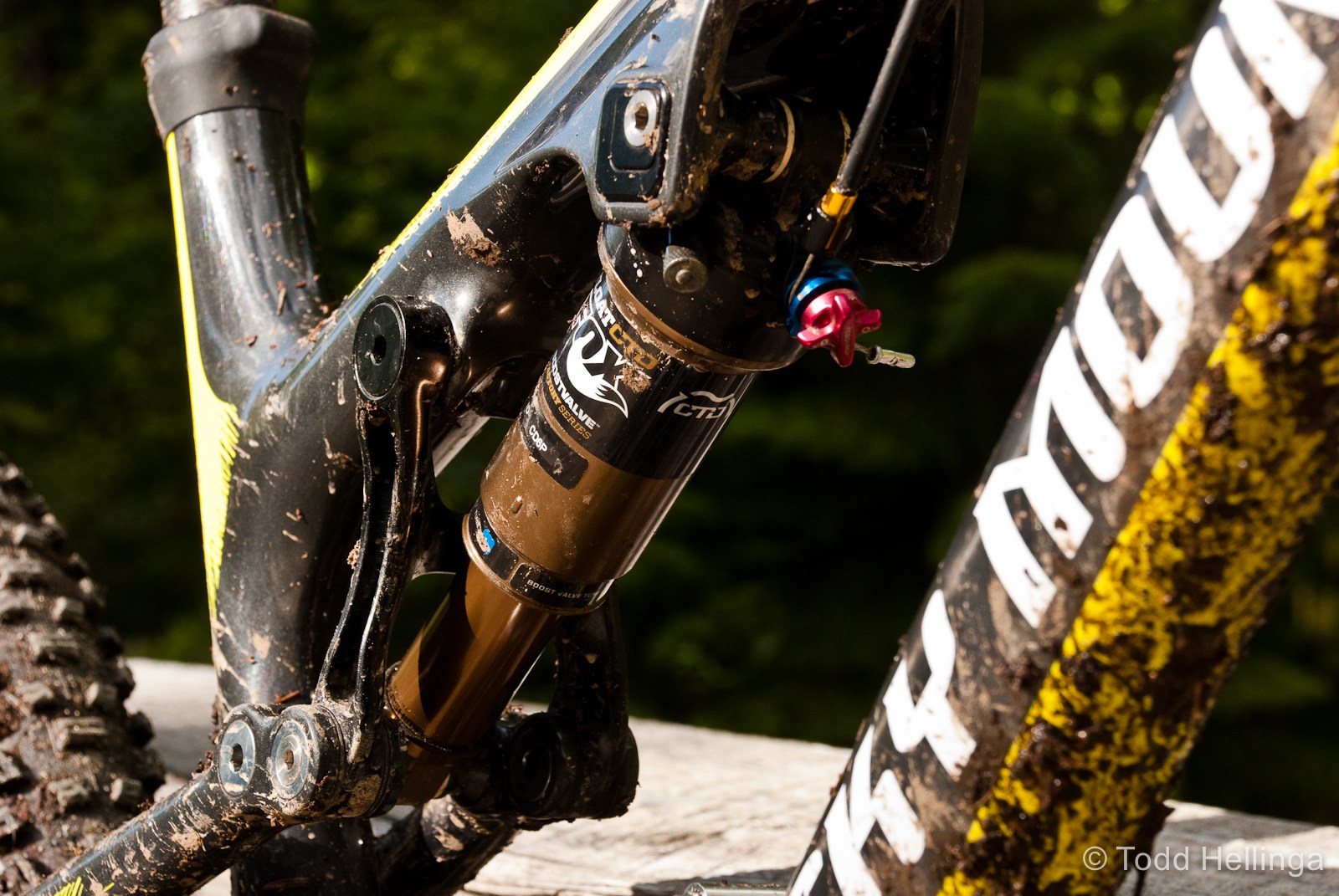 My demo bike arrived in Nelson just as the weather decided to change. A long spring of summer-like weather was pushed out by falling temperatures, increasing clouds, and rain. With the snow line creeping back down towards town, I did the smart thing and made a dash towards Hood River Oregon to join a Coastal BC contingent for a few days of camping and riding. While the rain was still off and on, the temps were higher and the network of trails in Post Canyon proved to be a great first few rides on the machine as I worked out the setup on the flowy, and sometimes steep and rocky, network of trails.

Setup measures included dropping the stem to only one spacer under it, and sliding the seat forward a hair as I am biased to steep technical climbing. While the bars aren’t super narrow, I am used to uncut Chromag Fubars (780mm), so the Six C offering from Race Face ‘feels’ a lot narrower than it really is (725mm)… although to be honest, my pinky fingers are sighing in relief as I tend to smash them off trees on tight narrow trails, which are not lacking in Nelson, and to be honest I’ve enjoyed riding without worrying about hitting my bars. A quick check against my regular ride (Giant Reign), showed bar/bb height to be within half an inch between the bikes, which I believe accounts for how comfortable the Altitude felt from the moment I threw a leg over it. 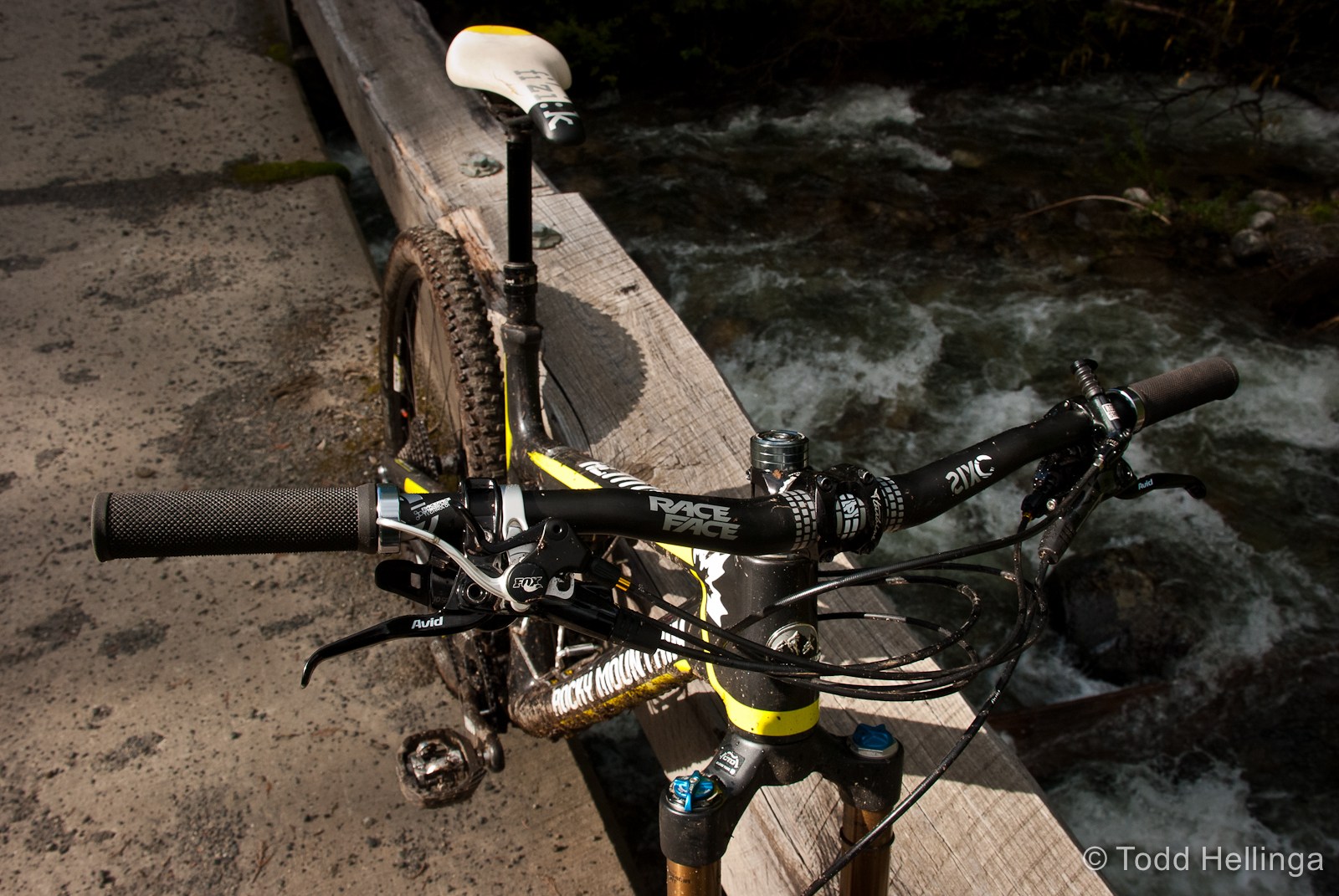 Yes, there are a lot of cables, but to be fair, things are fairly tidy on the front end in spite of the extra controls. I could live with a non-remote shock lever, but find myself using the Fox option frequently, it looks bulky but ergonomically it works well and I have no complaints about its performance. The Avid matchmaker mounts keep things orderly on the brakes/shifters… minor griping, personally I like my reverb remote a bit in from the brake mount, closer to the grip, but I guess that’s the price we pay for a fully integrated mount system, again, a minor complaint and not a deal breaker, although adjustments do require taking the shifter off the matchmaker to access screws. 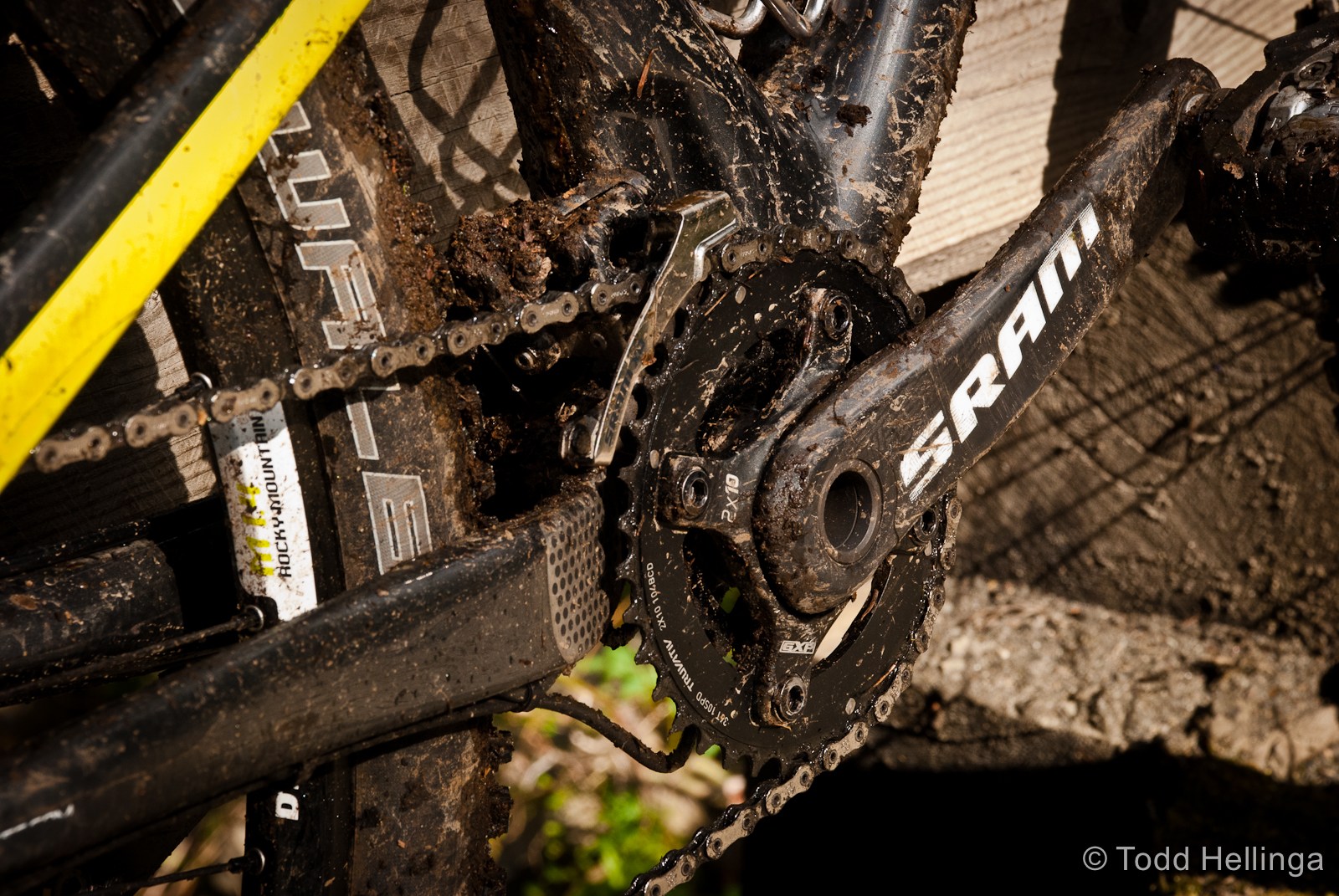 SRAM 2×10 gets the job done on the drivetrain, the cranks are plenty stiff, although have already seen some scoring from the loose errant rocks that run rampant here in the Kootenays. The front derailleur is a bottom pull and unfortunately mud gets dumped straight onto the gear cable and mech, and it’s already gotten gummed up enough on a couple rides to prevent dropping into the granny gear without clearing the mud. I appreciate the 2 ring setup, in spite of the tough guy, single ring silliness that seems to be running amok these days. Steep, long, technical approaches here in Nelson mean that the bailout gear is welcome and frequently used. 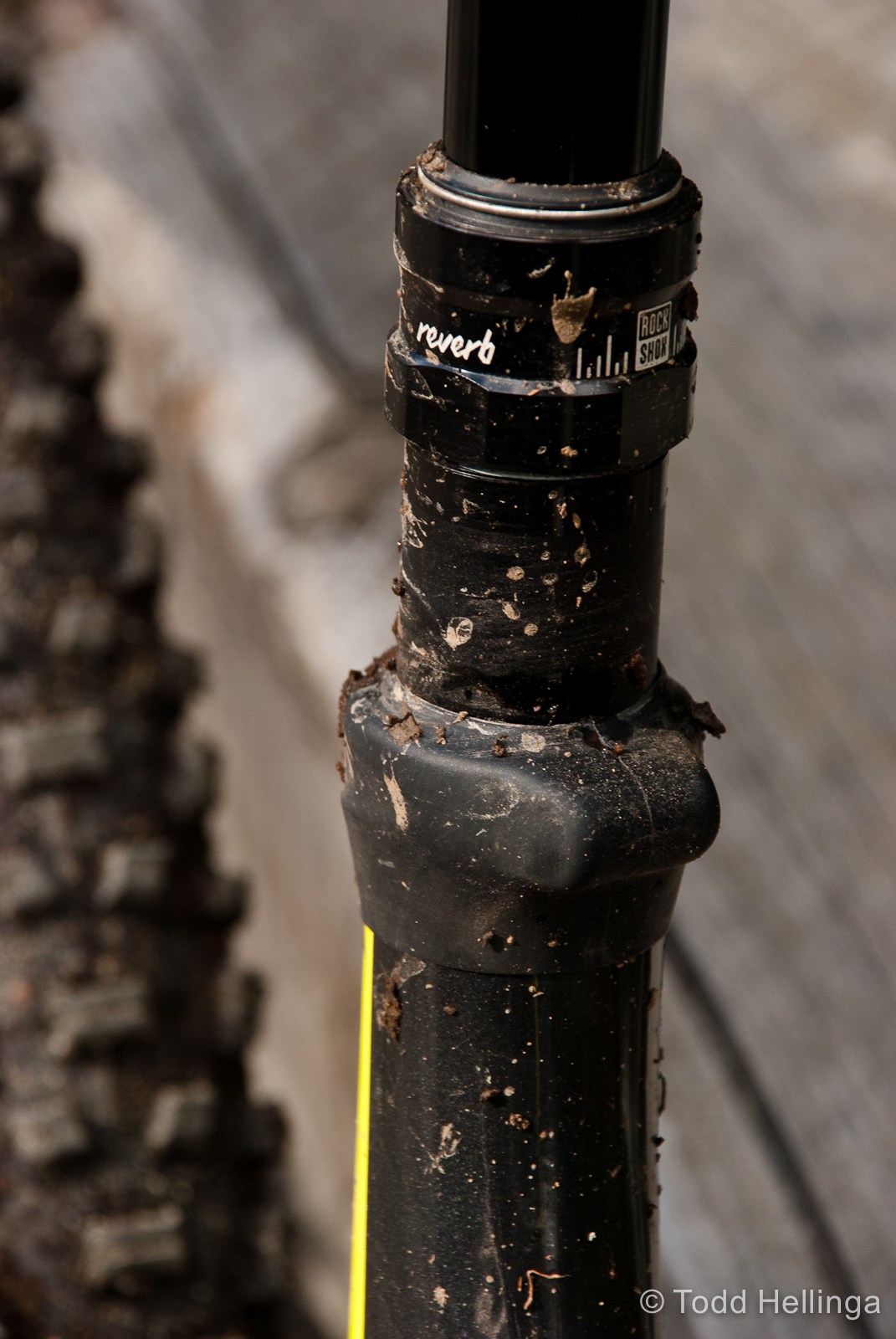 It’s the little extra touches that go a long way, we all know how wet and muddy it gets on the West Coast, and Rocky has included this little rubber booty to fit over the seat post collar to keep out the mud and grime. It’s been wet and muddy since the bike arrived and it appears to be doing it’s job. 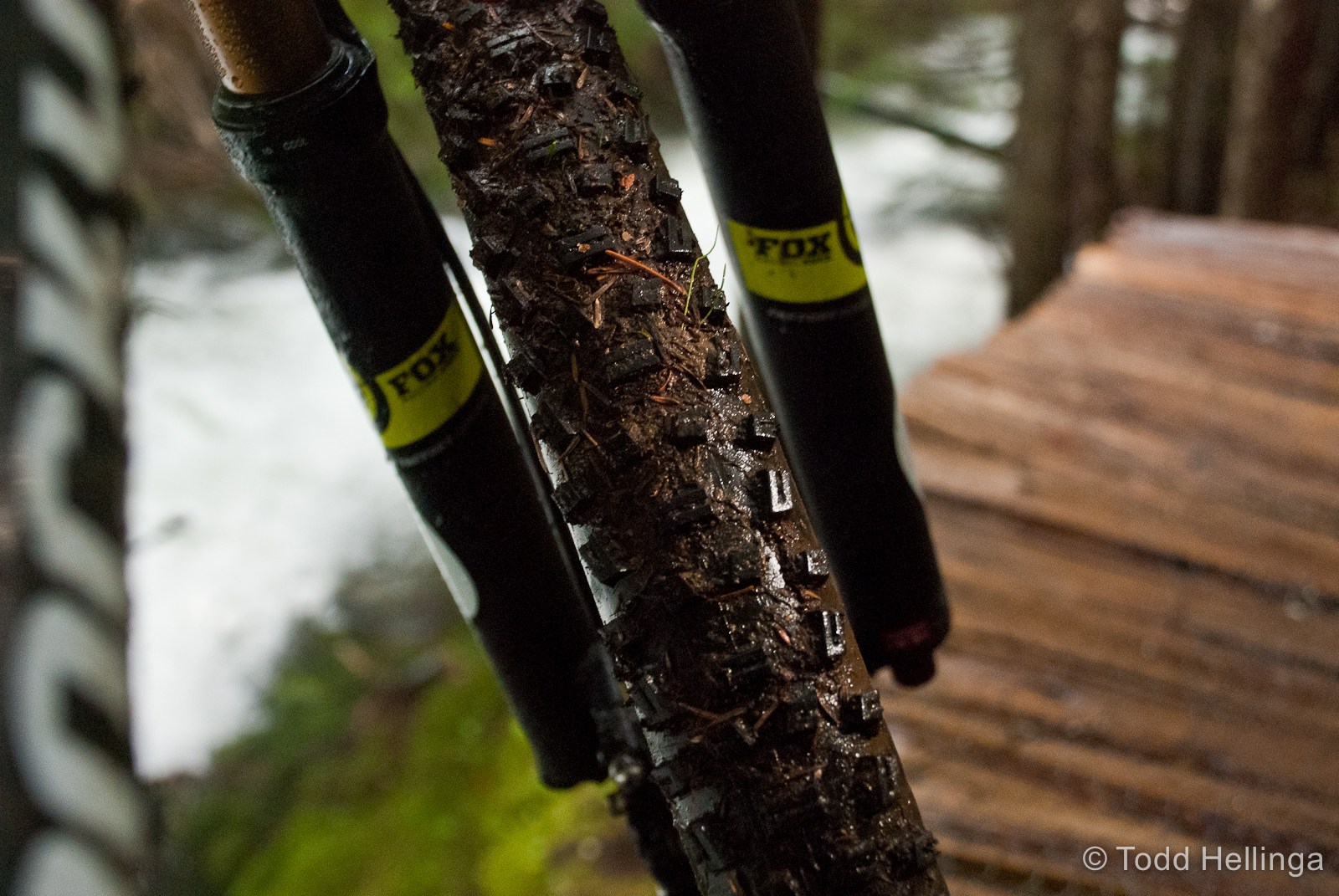 The Nobby Nics are proving to be about what I thought they would, a tire I’m both loving and loathing. They’re light and fast rolling and find lots of traction on dry climbs; however, they lack substantial side lugs and quickly become overwhelmed on hard rough terrain, with a noticeable lack of sidewall support when being pushed hard into corners while descending. On wet greasy trails they’re downright scary on the rocks and roots, and I nearly binned it half a dozen times in one ride last week in the rain. Expecting them to be unpredictable seems to be the best strategy for not going down.

Through the first dozen rides over the past couple weeks, I’m enjoying the combination of the straight up geometry and the 60mm stem, it makes for a bike that’s easy to manual and wheelie, and provides for a fast, lively, responsive ride. I started out in “Vanderham” mode (67.1HA, 74.1SA, 4.93mm BB drop), and while it climbed like a mountain goat on speed, I couldn’t help but feel like it was lacking something on the steeper technical descents, which is also easily attributed to the tires. In the slack setting for the past week I feel like I’ve gotten the tires under control a bit, and the bike has really begun to shine on the descents, although giving up a slight bit of mountain goating uphill speed, but still plenty comfortable and capable on the climbs thanks to the upright seat angle.

A short lap with the Altitude on a loamy trail here in Nelson.

While my initial, albeit cursory, impressions are favourable, I’m looking forward to continuing to put this rig through the paces over the coming weeks on the steeps out here in the Kootenays to see just how far into the realm of all-mountain/downhill this ‘trail’ bike can be pushed. Stay tuned!

Do you blur the lines between trail, all-mountain, and enduro? How’s that Altitude lookin’ from there?

Sick bike except there's none left anywhere! As far as I know Velocity has a medium 790 and that's it. I imagine there's some smalls and larges kicking around at some shops. Seems to be a popular bike, I like.

How do you like that Tundra saddle? I was looking at it but wonder if it will last as the leather seems really thin.

minimal, but comfy….white was not a great choice of colour, however. First ride in Hood River was wet and muddy and it turned red…white just shows the dirt too much.

nice review. That trail would get destroyed in a week here.

You mentioned that your regular ride is a Reign. If setup somewhat similar, can you provide some feedback on how the Altitude rides vs the Reign? Would be interesting to hear your opinion on how the bike stack up for climbing, descending and overall feel.

will probably throw a few comparisons out in the full review, and as I've been fully just into the Altitude for the past couple of weeks I want to do some back to back between the two rides to get a better handle on the differences….generally speaking however, the Altitude has more progressiveness in the suspension, the giant tends to be pretty linear and blows through travel on bigger hits pretty easily. The tires on either bike are pretty different too, chunky Specialized Clutch SX's on the Reign vs. Nobby Nics on the Alt so I feel like I can be more aggressive on the reign, so it's not a straight up equal comparison. Hope to be able to get a bit more insight though in the full review, cheers.

I went from a Reign to an Altitude… The Alti is a much stiffer and responsive bike. I also made efforts to have my Reign run more stiff (upgraded to a Lyrik as an example). The rear of the bike is a huge difference with that as well. I actually run my Altitude in the steepest setting the most and I find that it still descends with more confidence than the Reign… Slack it out and I'd almost take it to Whistler

yeah, I couldn't help but think about that too dropping into the chute!