I just saw that an Austrian guy broke the World Record for Top Speed on a Mountain Bike. While it is certainly impressive that he was able to maintain a tuck and hold on to his bike while hurtling 167 km/h down a 45º slope in Chile, I’m stuck wondering a few things.

Does anyone care? Should I care? Do you?

Does this count as mountain biking?

Does news like this help mountain biking in any way, or is it even counter-productive? The video footage is boring. Will this just make non-riders that see it think of MTB as a niche sport trying to draw attention to itself?

In humanity’s quest for “further, faster, longer” I wonder at what point we can say “ok Big Shots, maybe that’s enough”.

Sorry to get all existentialist on you.

Sincerely,
What does it all mean?

From the tone of your e-mail, you sound old, like me.  So I’m going to invite you to think back upon your childhood. Do you remember what coverage of our sport, and other “action sports” was like pre-Internet?  It was terrible.  Maybe twice a year, at 9AM on a Saturday, somebody would run a haphazardly produced hour of coverage of an XC race in Alberta. Or you’d be able to watch 45 minutes of an NBC announcer talking about Missy Giove’s piranha and her “crazy hair”, coupled together with 15 minutes of footage of people pedalling down Mammoth Mountain. It was just enough exposure to keep us all convinced that this thing we were doing was bordering on acceptable.

And then the fucking Extreme Games happened (I never did understand why “X-Games” was considered to be such an improved name over “Extreme Games”). I remember the ads for that showing up in the bike magazines in the lead up, and it actually seemed like it was going to be really cool. The Olympics of Action Sports. And then they happened. And it was pretty much just hours of street luge and rollerblading. And I actually watched this shit for a little while, because I felt like I was supposed to, but then even teenaged me was able to realize that something was a little off.

Now, of course, the Extreme Games weren’t the first time that people did stupid shit that nobody really cared about.  But I do believe it was the start of people doing stupid shit that nobody cares about in order to generate money for some faceless corporate overlord. On bikes! And skateboards. And rollerblades.  And, yes, even street luges.  Within a fairly short period of time we had the Gravity Games, the Dew Tour, and Red Bull jamming all sorts of stupid shit down our throats.

Now, don’t get me wrong, funding the questionable lifestyles of the Redbull heirs has done lots of interesting things for our sport. Without that fancy bull, many of our heroes would be devoid of safety headwear, and we’d have nothing to argue or worry about every October. But with all of the “good” comes shit like this – Some European guy riding his bike straight down a hill in the middle of the desert.*

So no.  I don’t give a shit about this.  Neither should you.  But then again…I mean…look at the shit that we do get excited about. Giant jumps carved into the bottom of Whistler so that people can flip and spin their way to glory? Sweet!  Gianter jumps off in the woods somewhere in the Interior so that a similar (but different) set of dudes can session away to their hearts’ content? Cool! A giant fucking loop that will nearly kill a guy when he messes it up slightly?  Holy shit!  That’s the coolest! 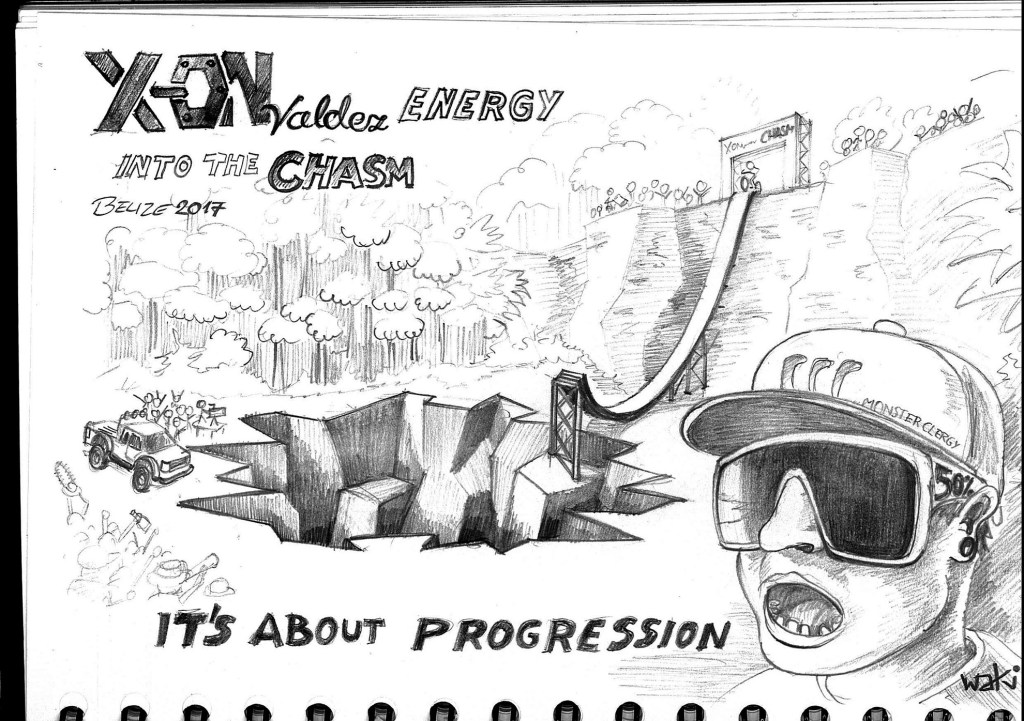 Illustration by Waki Designs. Check him out on Instagram.

We get really, really excited about people doing stupid things on bikes that make absolutely no sense and have very little to do with what we would generally consider to be “mountain biking.” And that’s fine. Semenuk stomping a corked 7 doesn’t really help you on your climb to the top of your next ride. Lacondeguy throwing fat, moto-sized whips over unconscionably large jumps isn’t relatable to most of our weekend activities. And Matt MacDuff doing whatever the hell it is that Matt MacDuff does, is about as far from anything as anything has ever been.  And we’re fine with all this.

So, I don’t think the problem here is that it isn’t mountain biking, or that it’s not relevant to what we do.  It might not even be that it’s boring.  Shit, I think you could even argue that this is relevant to what we do.  If you remember, a large group of people tried to do this back in the mid-90’s. Their forks broke and their bikes broke…it was basically just a parts explosion on a ski hill somewhere. So it’s kind of cool that we’ve evolved our equipment to the point where some yahoo can take a relatively stock bike and do this sort of thing without impaling himself on an errant piece of shattered aluminum and dying.

The problem here is that we’re over-run by people doing death-defying shit that doesn’t matter in the slightest, and that isn’t visually appealing enough to grab our attention.  The problem here is that people think that if they slap a logo on something that is “the fastest” or “the craziest” we’re going to lap it up. The problem here is that with a few subtle tweaks, Redbull will probably turn this into a massive something, where thousands of people will trek out to some 45 degree slope in Chile, and watch a bunch of imbeciles race their bikes down it.  In our quest for attention, we’ve attracted all the wrong sorts. For the most part, nobody cares, but it doesn’t really seem to matter.

*Don’t get me wrong. I’m not blaming Europe for this. I love Europe. I love Europeans. If I could justify it, I’d live there. They have better food than us. Better trains. They just sometimes do some really questionable things in the name of recreation. So of course the things that some of them do in partnership with Redbull are going to be a little bit kooky.

Congrats to Wigs! You win a can of Red Bull and an NSMB.com prize pack: Some Long Live Chainsaw stickers and , a Long Live Chainsaw mudder (part proceeds of both to the Stevie Smith Legacy Fund of course) and a Loam Ranger jacket (your choice of 2015 or 2016) with NSMB.com branding on your chest! Enjoy! What the hell – let’s toss in an NSMB snapback as well.

Head to our online store to support the fine work being done in conjunction with the Stevie Smith Legacy Fund. 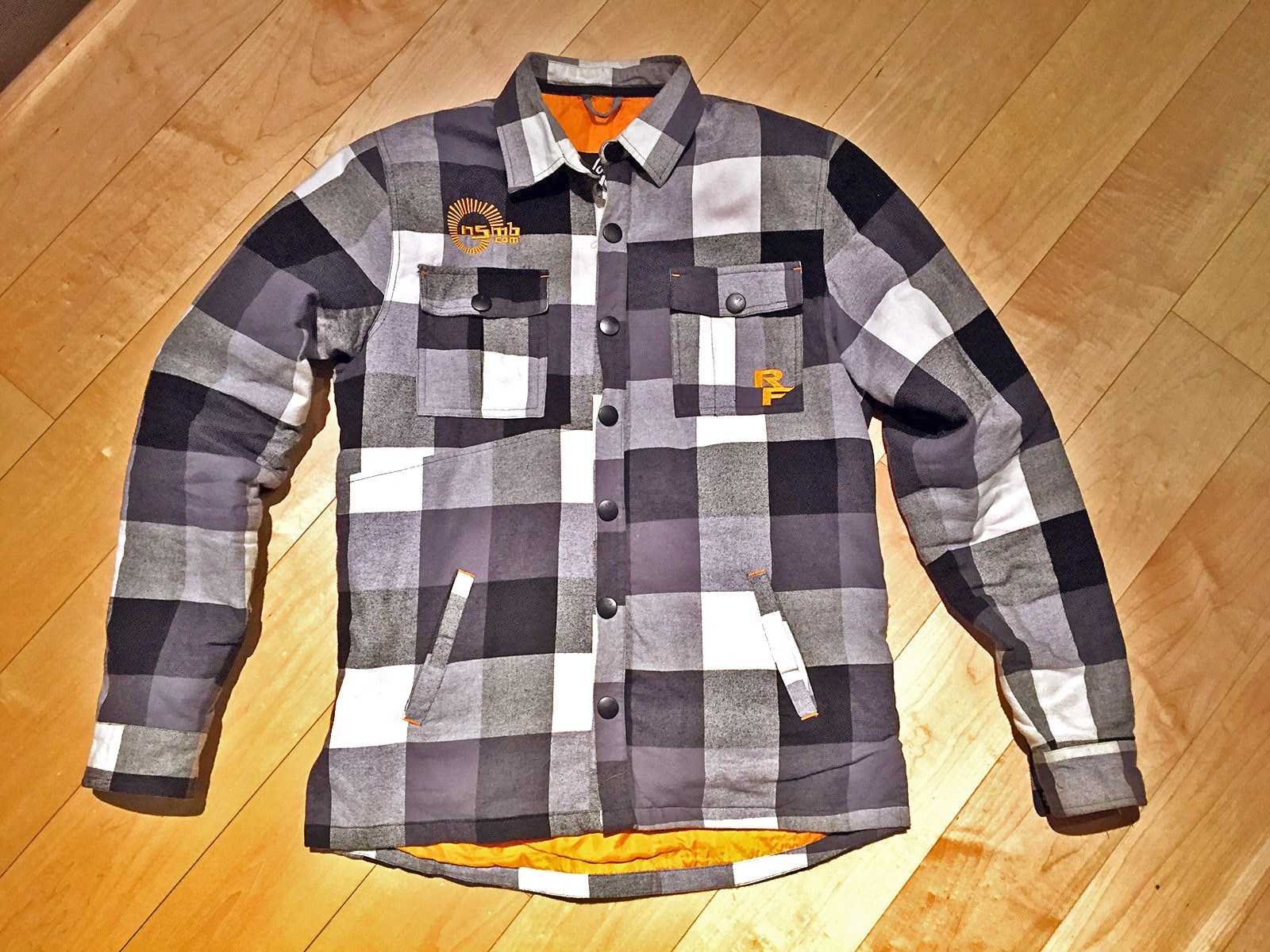 All of our Loam Ranger jackets (by Raceface) have quilted lining a generous fit (size one down unless you want it really big) and a flask pocket.

In the spirit of being wrong, and because they seem to be back from the dead, I want to talk about Wolf Parade. For a while, I probably would have told you that Wolf Parade, and their associated side projects, were my favourite. I speculated at one point that twenty years from now, Wolf Parade would host a themed cruise of mid-aughts nostalgia, and I would probably be along for the ride. I bore witness to some great shows of theirs over the years, but now as I look back, I realize that they really only created one great album (Apologies to the Queen Mary) and one great side project (Sunset Rubdown). Everything else was thoroughly mediocre, but these two things were enough to convince me of their greatness. So I don’t even know anymore. Collection of musical geniuses, or band that put out one great album that convinced me that they were?  Only hindsight allows me to think these thoughts.

This is one of my favourite videos…of all time. I truly love this song, and I appear to have an affinity for puppets in music videos.

I think this might be the most Wolf Parade thing possible.

This is the only Wolf Parade song not on Apologies.., that I actively go back and listen to. That and “Oh You, Old Thing”

I’ll leave the Sunset Rubdown rabbit hole for another day.

Got a question? Send it to Uncle Dave and he just might tell you he’s sorry.

I would say the speed record is most similar to Macduff's loop. Both are stunts that happen to nominally involve mountain bikes, but neither of which is mountain biking. You can care if you want, but you certainly don't need to…

I just love the vanity connected to certain uses of a bicycle, like going for a month to Himalaya with it and calling it sacred… Nama-fkng-ste. There was also a man who wanted to take his beloved Fixie to the top of Mt. Everest. Maybe ride a bike to the North Pole. Ok, that's extreme. But also simplier things like bike packing, riding fatbikes on the piste, hello?! Maybe E-fatbiking on the Piste? Then Fest series trying sooooo fkng hard to get at least a bit close to what Moto Freestyle does. I love Andreu, I do get inspired by some of these jumps but then I see a regular Supercross competition and the complex of the little brother is looming. Whatever it is, you have to make sure you put a mountain bike on it and claim it's great for the progression of the sport… so I would like to see bike speleology. I can see Nite Rider being a big, big sponsor… This drawing of mine will hopefully inspire somebody.

I would like to add "no rolling coal" to the list of things that are better in Europe.

Oh come on, The Handsome Furs were far from a mediocre side project, one could say this was much better than some of Wolf Parade's own stuff.

Yes, Plague Park was pretty good. But did you ever see them live? I remember telling a friend I was going, and they said something along the lines of "Oh no…I can't go and watch her for that long." This confused me. But Alexei Perry has a tremendously annoying stage presence that makes the band hard to watch. I think that did it for me.

Well, this "European" guy from Austria is running quite a successful MTB team as a day job with a certain Danny Hart as team member.

TBH, I see not a big difference between this and James Doerfling skidding down some gravel slope doing some "Big Mountain" riding. It is so far away from "normal" riding - but as both involve mountains and bikes, still MTB, right? Or not?